Looking forward something simple to take with me on holiday to do while my wife and daughter read led to me having a look at Airfix kits in hobby craft. While I liked the look of the T2 VW I thought it would take up a lot by of space and be too difficult to transport once built so I left home without any modelling kit or a holiday project.

Our first stop over was in Stirling and after a trip round the castle, I was not inspired to take up tapestry despite the amazing work in display complete with how to exhibition, we wandered through town to find some lunch. The bakery we found happened to be roughly opposite a Warhammer / games workshop establishment so I thought why not have a look and see what’s there. I don’t think I have been in one of their shops before but was welcomed warmly and assisted ably by Liam. A few pounds later I left with an ‘age of sigmar’ starter paint and tool set, a small pack of 11 ‘Gretchin’ Orks some glue and a handful of freebie miniatures to practise on.

The paint set has 13 colours in 12ml pots with strange name such as Bugman’s glow and retributive armour a rather nice gold colour. The tools are a pair of sprue cutters and a scraper to remove any flash from the mouldings both of which were on my tools shopping list anyway. The last item was a starter paintbrush which is of dubious quality. 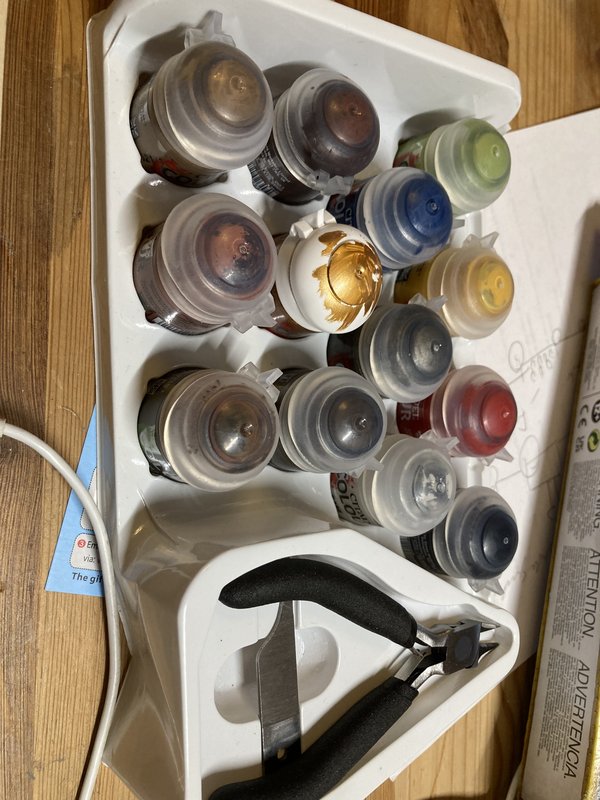 After making a couple of test pieces in the tent at Tarland in Deeside I bought some Revel brushes in one of the towns we visited to make retail painting easier. One of the free bits I built was a space marine a future monk sworn to protect the legion of humanity which I quite liked saving a spare one for when I am home and can paint him in a more ecclesiastical purple! The other character was some sort of warrior who did not inspire me at all except for his spikey headdress whereby i can see me cutting off his head and adding to a different miniature at some future time. 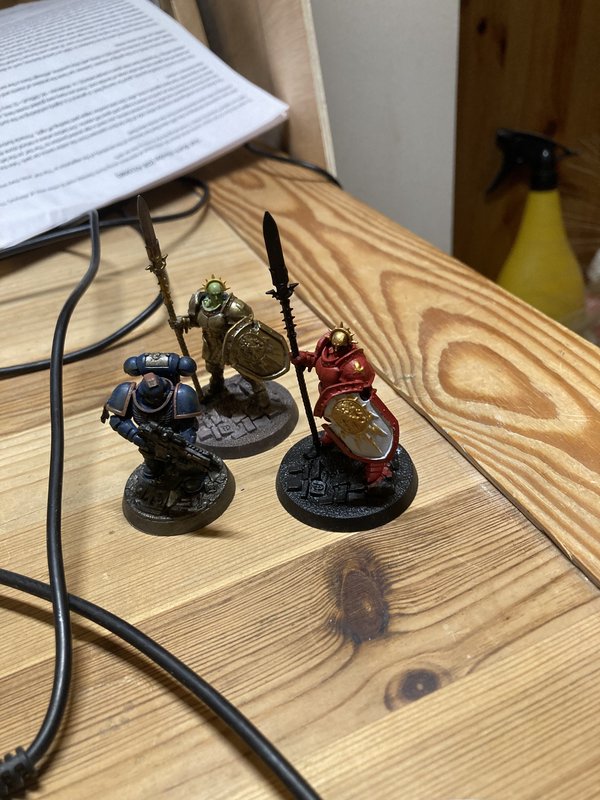 I spent some time designing a diorama to give each character a role thus the ‘Gretchin train wOrks’ was born. The diorama features a bridge which a train can stop on with a welder underneath, a forge with bellows operator, someone putting something in the forge with a gripper and possibly a hammerer. A crashed cart plenty of iron pyrite and a grabbing arm. One of the miniatures had the option of a long pointy finger which screamed rivet counter to me so the final element would need to be a rivet counters office. Whether this will be built is anyone’s guess but it gave me the characterisations needed to work on the Ork miniatures.

Moving on to the 3rd stop of our holiday in the troussachs I started to assemble the Orks. They all came with weapons attached which the spruce cutters made short work of removing and in the absence of a scalpel I used a leather man multi tool to cut away any extra plastic I didn’t want. I also stole half a nail file from Seren to sort out any rough patches. Two weapons were repurposed for use as a welder and tongs. 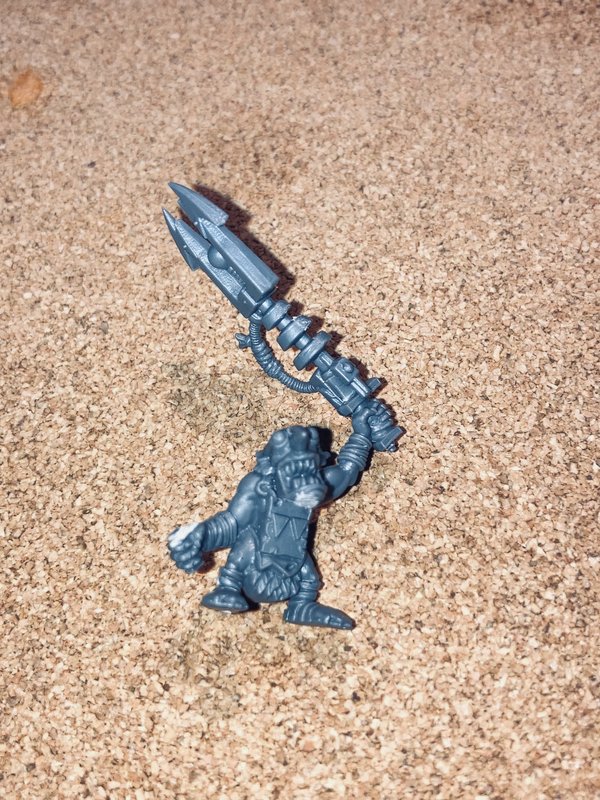 The most serious surgery involved removing an entire arm and shotgun and replacing it with an arm cut from another character who had a double amputation in order to receive a pair of arms linked to operate bellows. 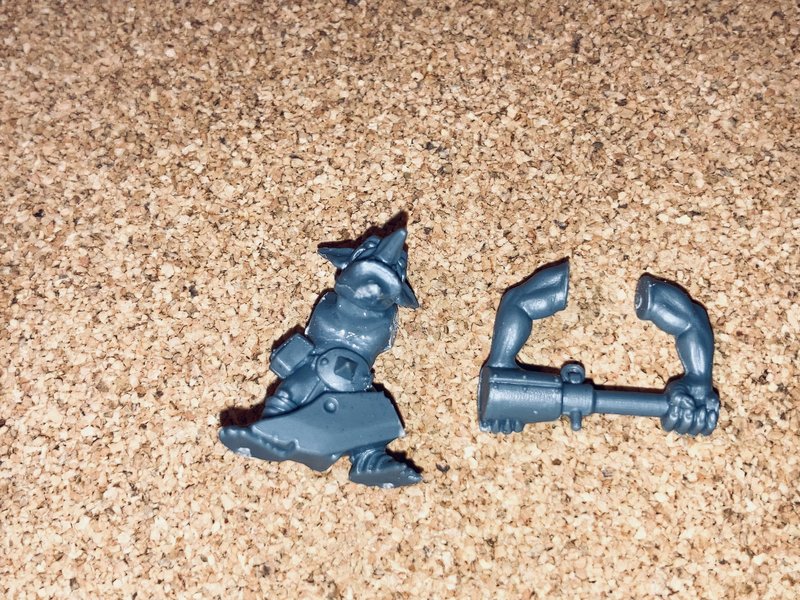 I didn’t build either the hammer or the rivet counter characters as I wasn’t quite sure how I intended to use them.

Part of this project is to help me put together a small modelling kit I can take away on future trips to keep me entertained while Cate and Seren read or go off on their own. I would like any suggestions of tools that you consider essential in a portable modelling kit. They could be train related or not as the kit is aiming to be a for whatever project I take with me. Although Care and Seren take over 20 books on holiday with us I have minimal space in the car so need to keep my kit small perhaps a little fishing tackle box ?


After the surgery and recovery time for the glue to set I have all the miniatures an undercoat of Abadon black as a base to start painting from. 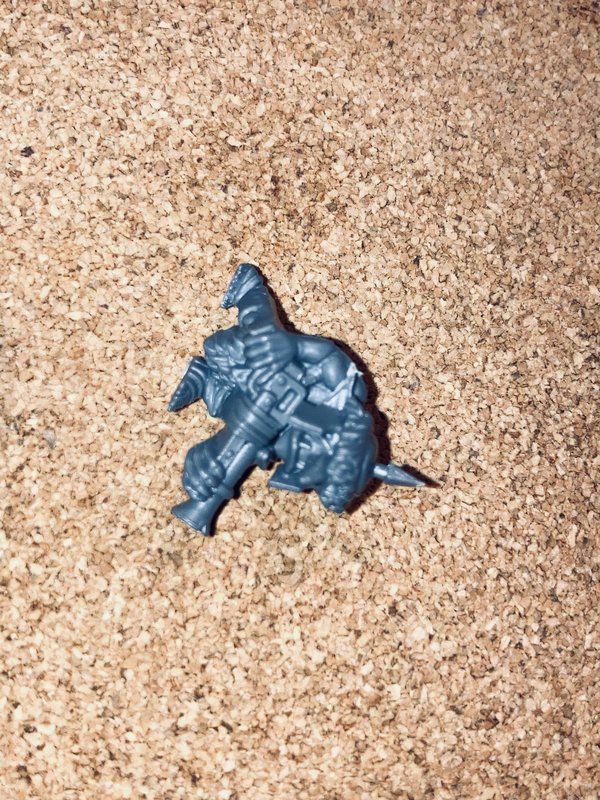 Knowing I had a limited palette to paint with I also painted a spruce so I could test some paint mixes from the available colours. This resulted in mixing the green flesh colour with some brown and yellow for a darker base. On top of this I used the natural colour and finally a lightened version fir some dry brushed highlights. The white provided in the set is a bit grey so not ideal but it worked ok.

Highlights of red for masks and hair and a dark blue cap for the driver and silver/lead colour for any former weapons repurposed as tools. 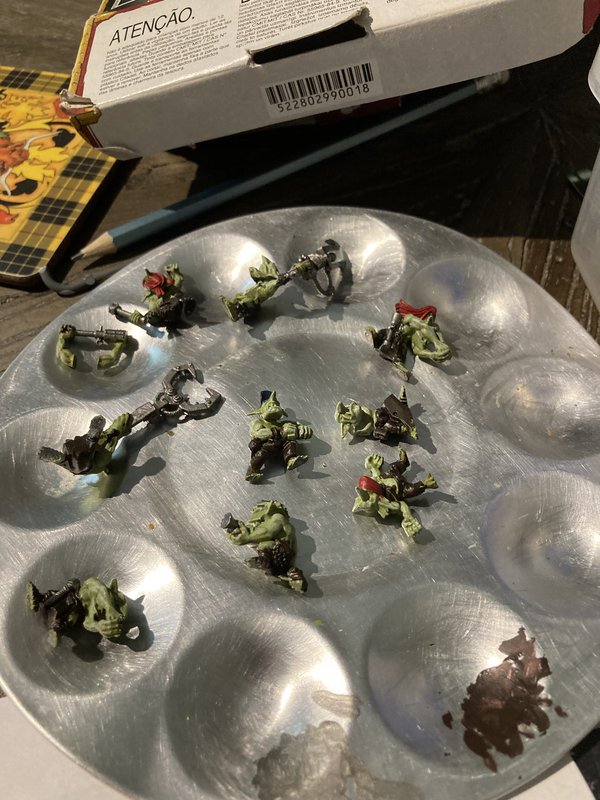 Clothing and straps were given a rhinox hide base coat and a lighter mix dry brush.

Final accents of a gold colour were used on buckles and the ball in the welders tool.
The clothing and tools were given a wash with Agrax earthshade which is roughly equivalent to my favoured army painter dark tone. The flesh will get a green tone wash when I’m home and any eyes will be painted then too with my tiniest brush. 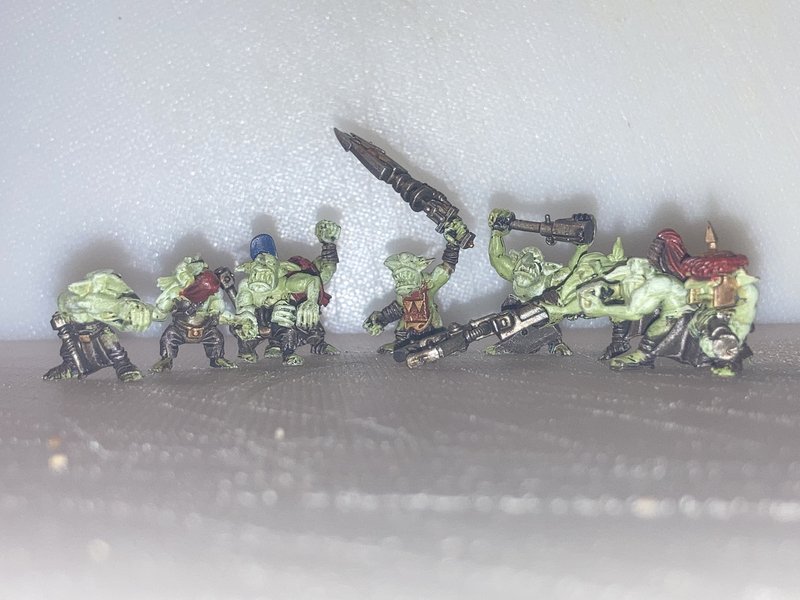 Now home I used my tiniest brush to dot the Eyes black and cross the Teeth in white before giving the flesh a wash with the aforementioned green tone.


Next was more surgery on one of the characters. I drilled through his shoulders inserted a tiny brass tube and put piano wire in this. 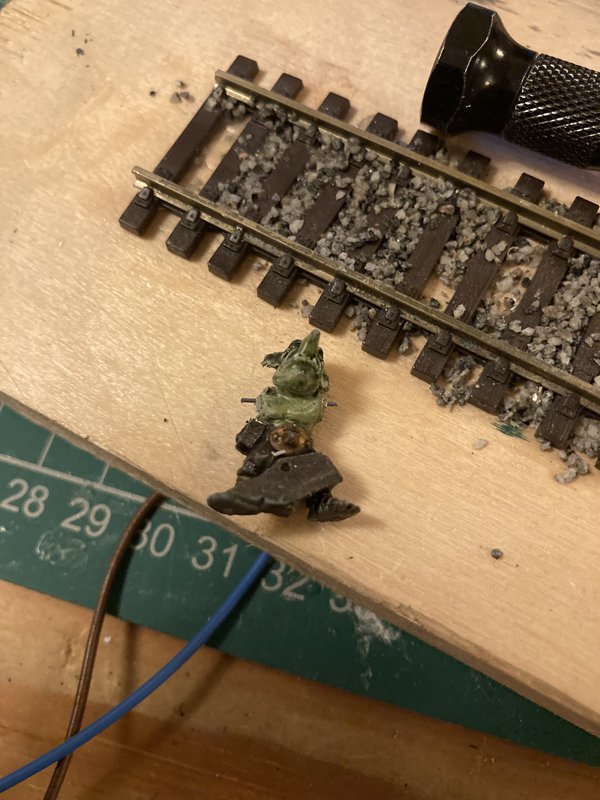 Small holes in his arms receive the piano wire and he is now ready to be attached to some bellows. 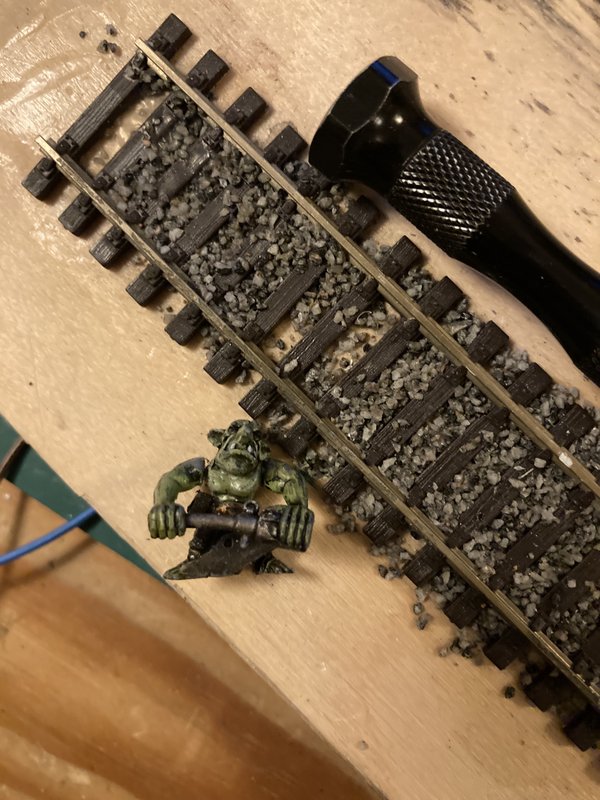 I won’t be doing much on this for a while as now I’m home I will be concentrating on trucks in a tizzy.
My layouts and workbench

Trucks in a Tizzy
my wOrkbench
Top

While I'm waiting for some bits for Trucks in a Tizzy I've been giving a little attention to the Gretchen Train wOrks.

I undertook some major surgery on 'Da chief rivet counta' First swapping his left and right forearms then adding a mechanism so that he can wave his arm in disgust. before starting to paint him. 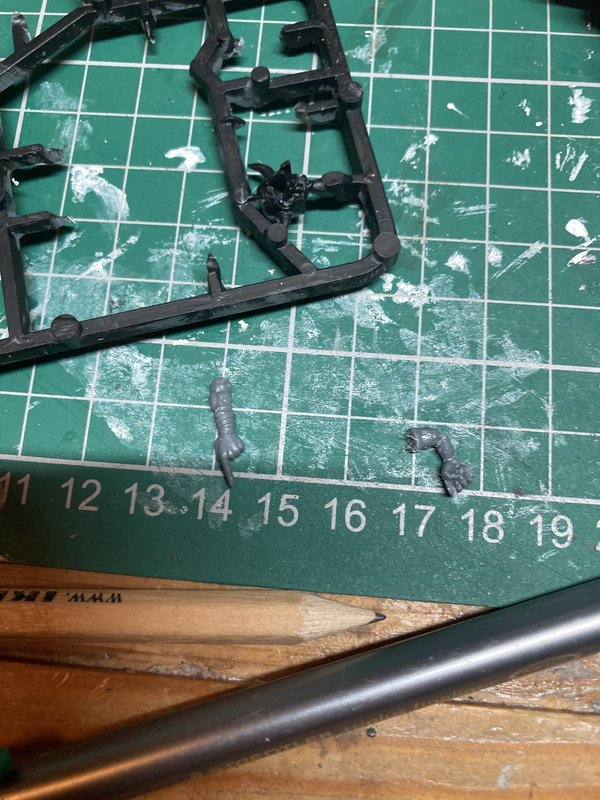 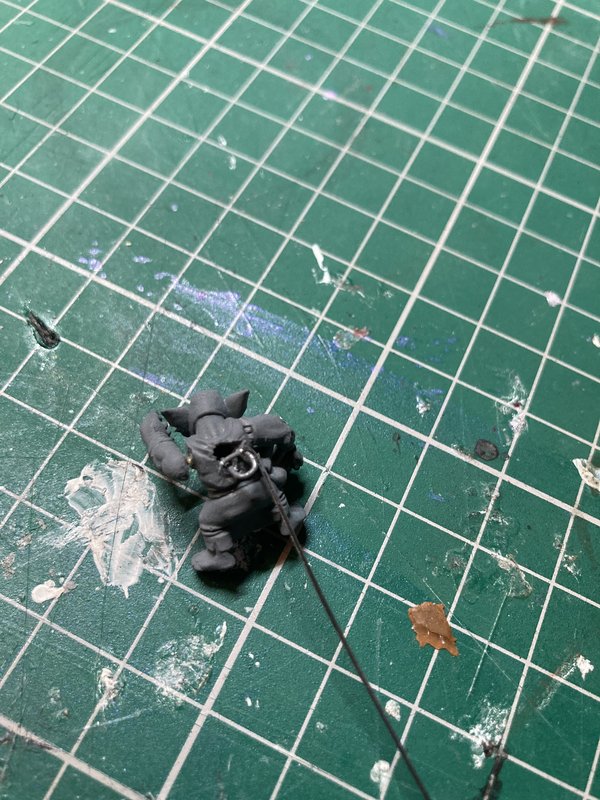 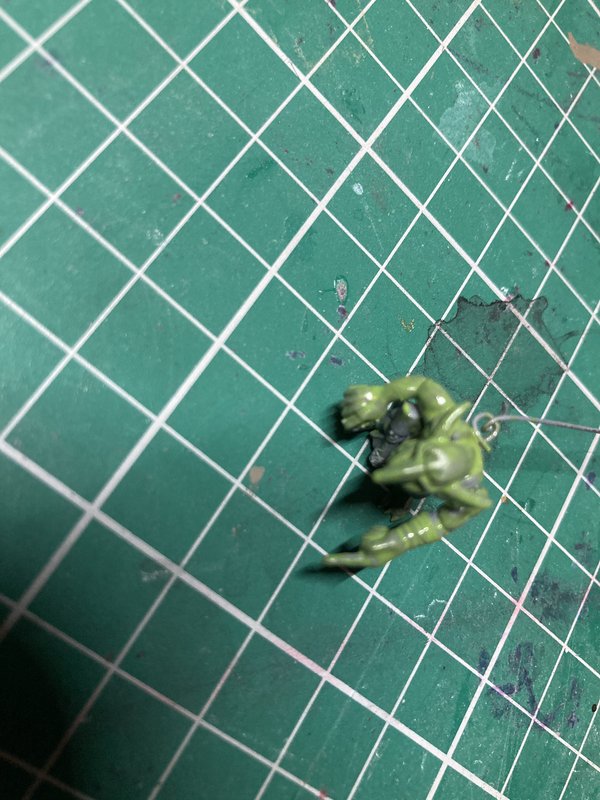 I bought a set of Warhammer Men Boy Workshop scenery to give me the industrial parts for the wOrkshop and the centre piece had a claw which I'm setting to rotate ready for one of the Gretchen to hang on and a rail system to make the chain lift move recycling some spare wheels from the Trucks in a tizzy conversion.. Both will have servo systems added late to make them move. 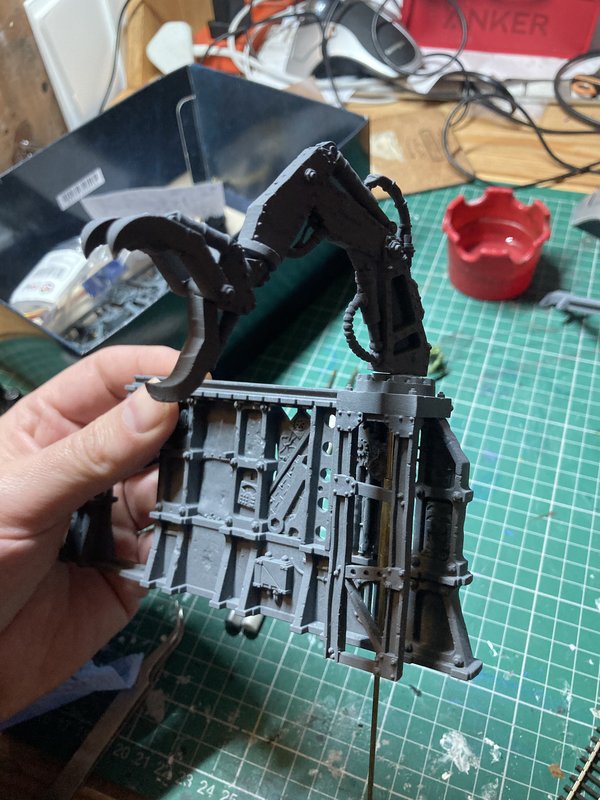 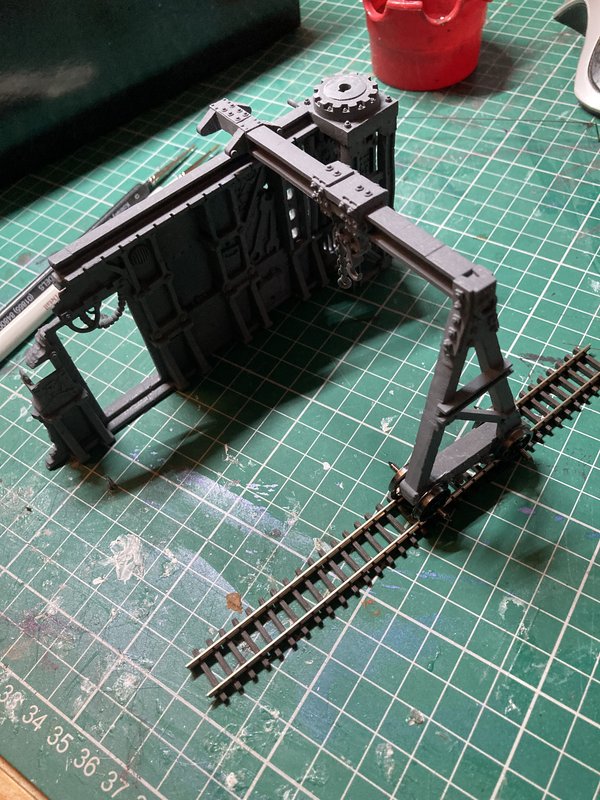 The set had some junk piles which I have painted up ready to disperse. 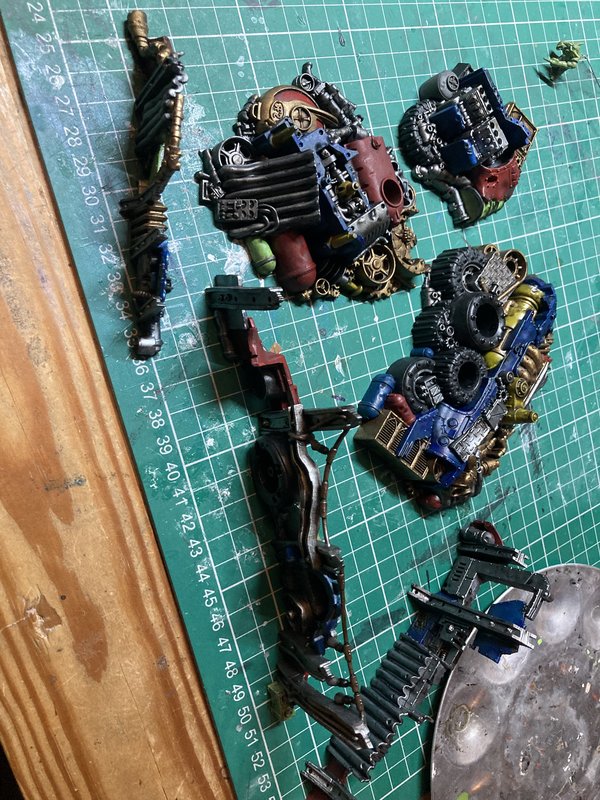 The final bit I've bought so far is a wall gate which I plan to use as an entry or exit to the wOrkshop. The three notches at the bottom of the door are conveniently in the correct place for either n or 00 gauge track. I will need to build a mechanism to raise the door. The top of the gate is also wide enough to take a piece of track so I can add a running line at that level if I want too later when I finally decide if this will just be a diorama for a programming track or a fully working model raillayout. 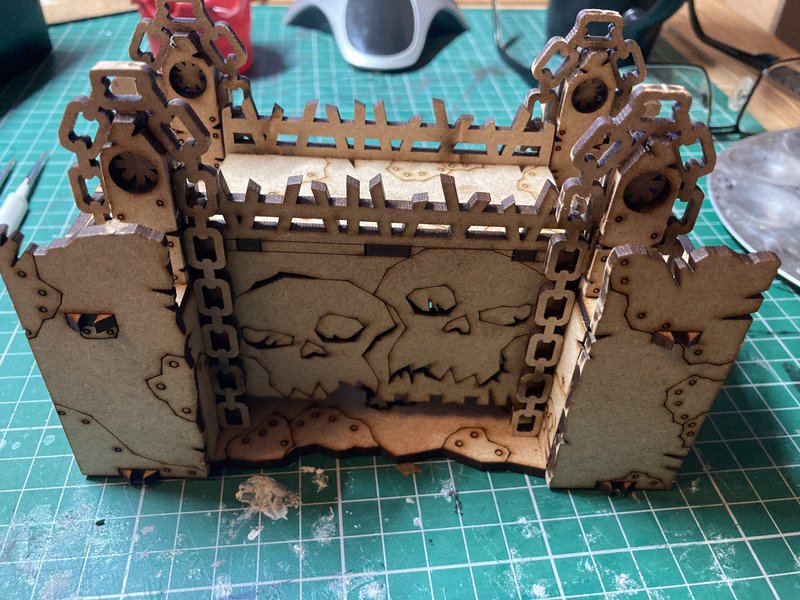 My layouts and workbench

Trucks in a Tizzy
my wOrkbench
Top

Some sawing and filling with green stuff and a few bits superglued in. 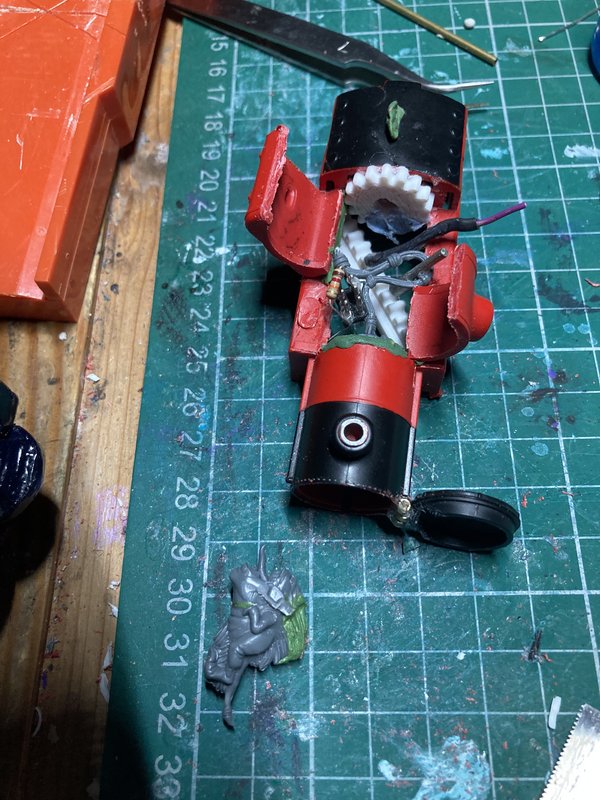 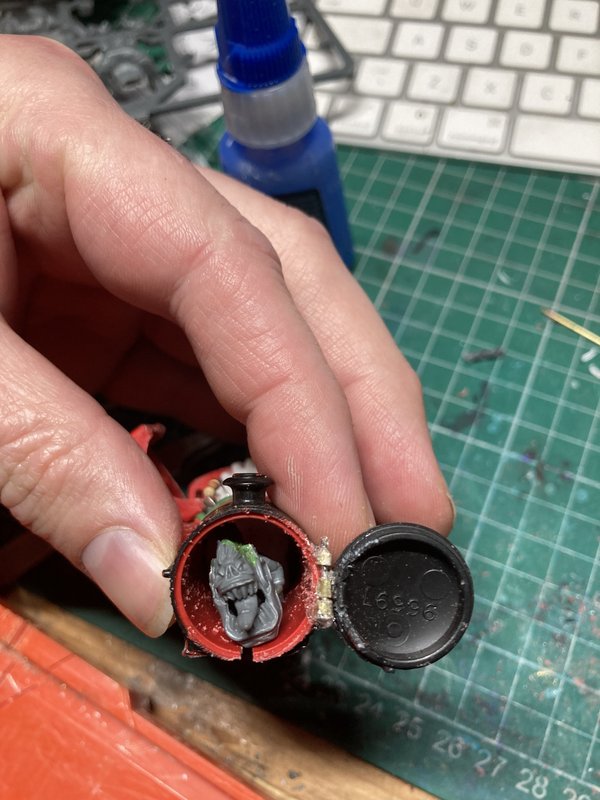 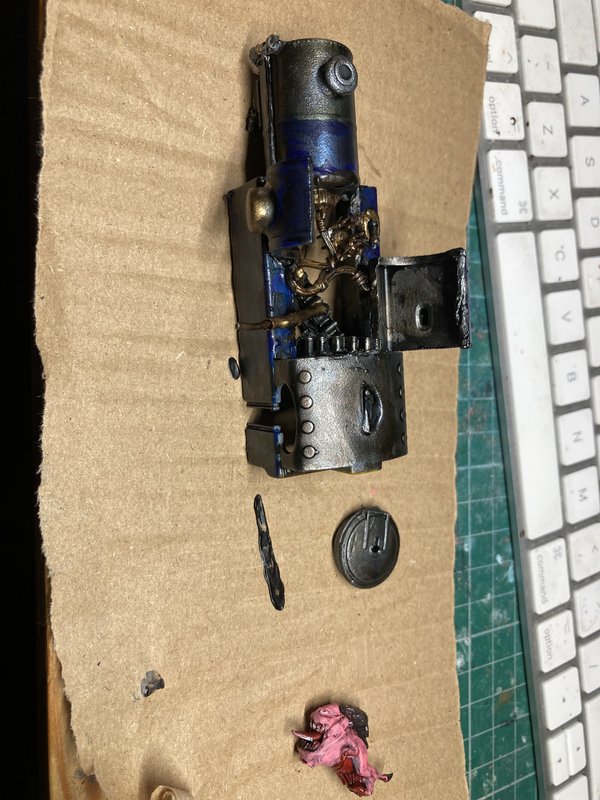 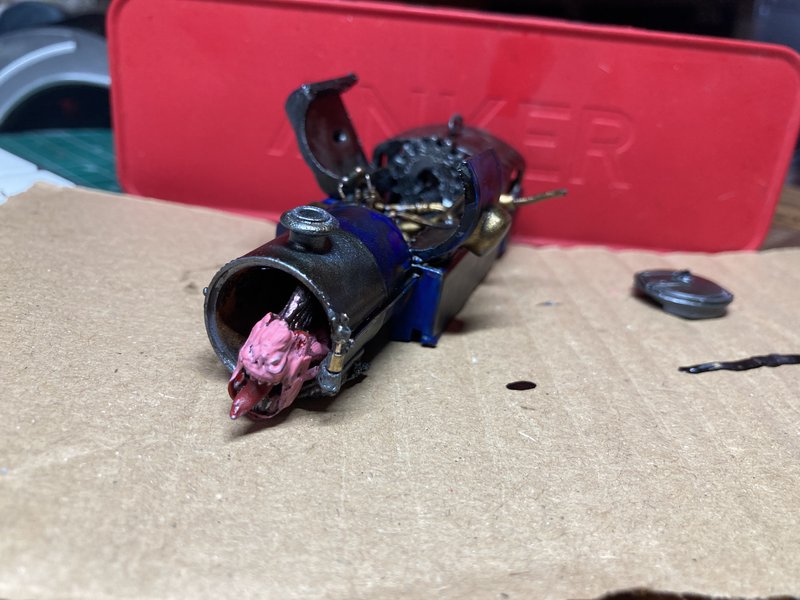 I will add rust pigment powders once it's installed on a board.
One of the other animations will be two Gretchen lowering an engine into this train or pulling it out I'm not sure which and I don't suppose they do either.
My layouts and workbench