Two came up recently on eBay. The first auction, I slept through my alarm clock and it sold at the minimum reserve. Set my sights on a second one, and got busy at work and remembered five minutes too late that auction was coming to a close. Could bloody well shoot myself. Checked on eBay UK, there is one there for about 250 BPS, for that I'll wait a bit. Pitched him a reasonable offer and the reject notice came back at the speed of light. Guess he'll have to wait a bit, too.

I did have one back in the '90's that I traded for at a model train exhibition. Then ran it for about 14 hours over two days. Apparently toasted the motor and am told there is no chance of repair. So all I need is the locomotive, but would purchase any and all of the set if such were available. Plan is to incorporate it into another Henley Steam Fest.
I don't care what they say. I believe in Nessie.
Top

These are stupidly - and quite disproportionately - expensive. The locos are not that reliable either I have found. Unless you really want one and are prepared to pay big bucks, I’d give it a miss Chops.

I had one many years ago, quite a nice thing for the time, why they did3 coaches for it I'll never know, mine could barely pull one! Didn't it have a built in smoke unit?
Top

Hornby rereleased it the 1980s - I did embark on reactivating mine - the motor was shot so I replaced it with an appropriately sized modern motor and fitted it with a DCC decoder with additional pickups on the tender. Then I discovered a major problem - the wheels would not go through 21st century Peco Code 100 points - overtime Peco have tightened the clearances on their points so whilst it ran through Peco Code 100 points back in the 1980s no chance today. The model has a split chassis which makes sourcing an alternative wheel set that bit more awkward and I am thinking that the solution is probably to get the flanges turned down. Cost wise I have seen them sell for silly prices on ebay, then the seller remarkably finds another to sell at an equally inflated price, meanwhile someone watching these "sales" puts one on at a low price expecting to get £££ and it sells for a low ££
Last edited by Mike Parkes on Mon Dec 03, 2018 5:45 pm, edited 1 time in total.
Top

That might be a better option. Come to think of it, I never ran it through points, Peco or otherwise. The chassis seemed pressed together in some manner that disassembly didn't look even remotely possible. Maybe I should just take the thing and plop it on a low sided wagon with some bunting...

I recall my Rocket was able to haul its three coaches, but required excessive voltage and a great deal of wheel slippage, no doubt contributing it to its early demise. Thinking on it, maybe a tender drive could be contrived...
I don't care what they say. I believe in Nessie.
Top

I don't know what you are like at building kits, if like me you are rubbish this will be of no use to you, otherwise this may be of interest to you

I have seen them in many model railway shop,includng Hattons HERE
My Web Site Links: FGO & Boats and Canals (Forum)
Top

Motorising one should not be too difficult with the parts available today. The tender is big enough to contain a type 7 motor with a propshaft through the firebox to gears on the front axle, leaving room in the boiler for some ballast. Or you could use an N20 gearmotor with bevel gears or crown and pinion on the front axle. Failing that make it a free running model and put a Tenshodo SPUD under the first coach.
The is definitely NOT going on my project list.
Growing old, can't avoid it. Growing up, forget it!
My Layout, My Workbench Blog and My Opinions
Top

What I noticed when I went to fit some etched nameplates to mine is just how much was wrong with the Triang body as I tried to align the nameplate with its position on photos and the detail of the boiler barrel - the ex Airfix kit is a better model all round. Would think its surely time that someone (NRM / Locomotion ?) comes up with a new rtr model.
Top

I think this is one where "there just isn't the demand". There's not many layouts where one could be run very far.
Growing old, can't avoid it. Growing up, forget it!
My Layout, My Workbench Blog and My Opinions
Top

Not sure about that - given the replicas that have been built most notably the 1979 one which has been a regular feature at open days and preserved lines suspect many would have have a ready excuse for one, and many others simply because of its unique historical value.
Top

I would rather hope that there were a demand for the Rocket in OO, but one has to really be intrigued by history, and that may be a hard pitch. Anyways, having slept through the first auction, and then couldn't get my eBay password to work with three minutes to spare on the second, I pondered different ideas: 1. finding some wizard in the UK to fix the one I have, 2. adapting a powered truck to the tender and making it tender drive (probably not going to work), or 3. placing the Rocket and its tender upon a low plank wagon, add some bunting, and have it pushed merrily along in the imaginary Henley Steam Fest.

Then, in the mail, came a most marvelous surprise from a model railhead pal in Brooklyn, who sent me this beautiful New York City subway coach. For years I had envisioned a penultimate point-to-point consisting of a baseboard of an eight foot heavy card board tube, or PVC drain pipe, with a foot long cutaway showing a subway platform with commuters, bits of rubbish, graffiti, and arrange a subway train to traverse in both directions, and stop at the station platform between circuits, automatically.

As a space saver, this thing could be hung easily upon the wall- and would be very easy to transport to exhibits where I don't recall I've ever seen the like of it, as described. The this thing came out of nowhere, I'd forgotten I'd even mentioned this mad scheme, and the Rocket will be relegated to a spare goods wagon and the Tube project shall proceed, ASAP. Should be no trick to print out suitable wall and ceiling tiles and I have a handful of vintage Airfix Civilians that won't quite fit on the Eduardian Era "Henley."

The greater technical issue, not hard for someone who knows a little about electronics, which I have limited knowledge, is to fashion a power source that will both automatically reverse polarity and cause the subway to coast to a stop at the platform.

Anyone have any idea what suitable British bunting would look like and how to achieve???

I don't care what they say. I believe in Nessie.
Top

Just in case you want to revive your 'Rocket' project, there is a solution to repair your original motor.

The motor is an X500 and was used with a modified brush plate in the Minic Motorways range. The magnet, armature and pole pieces are identical but you would need to remove the worm (pinion) from the donor one to replace your burnt out armature. I have done this with my Rocket and it works fine now, or at least as good as it was designed to!

These may also be of help. 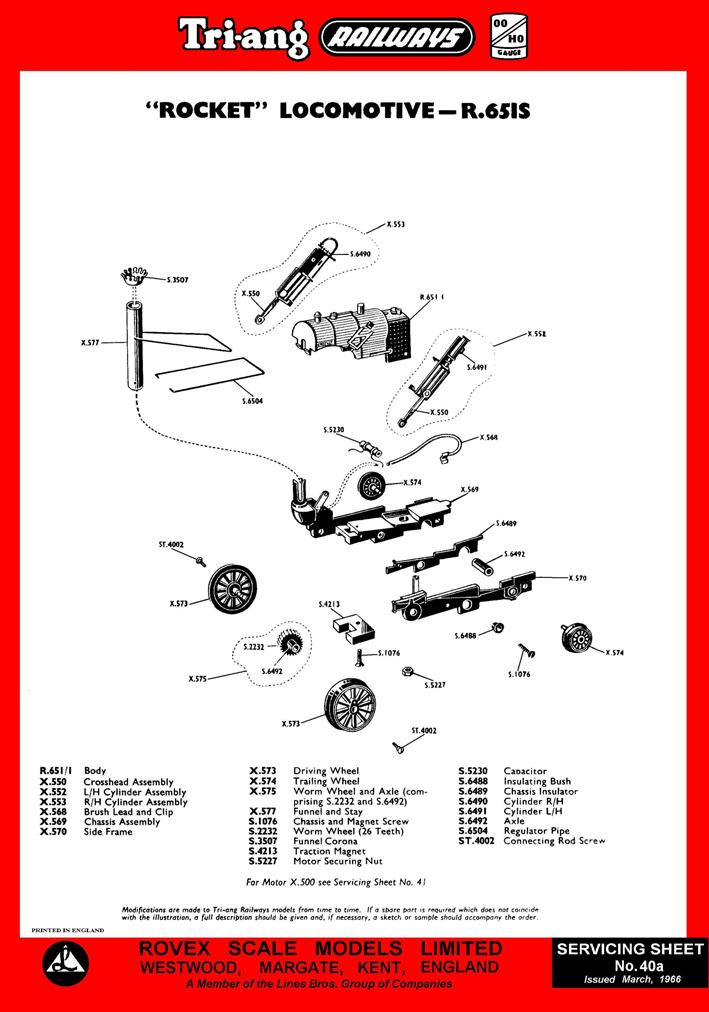 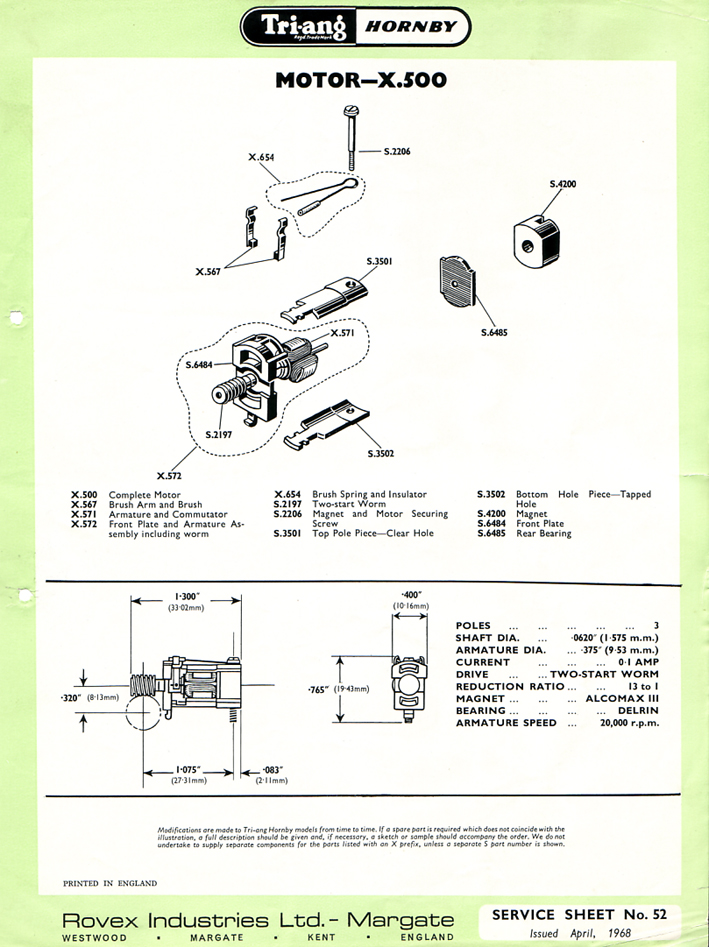 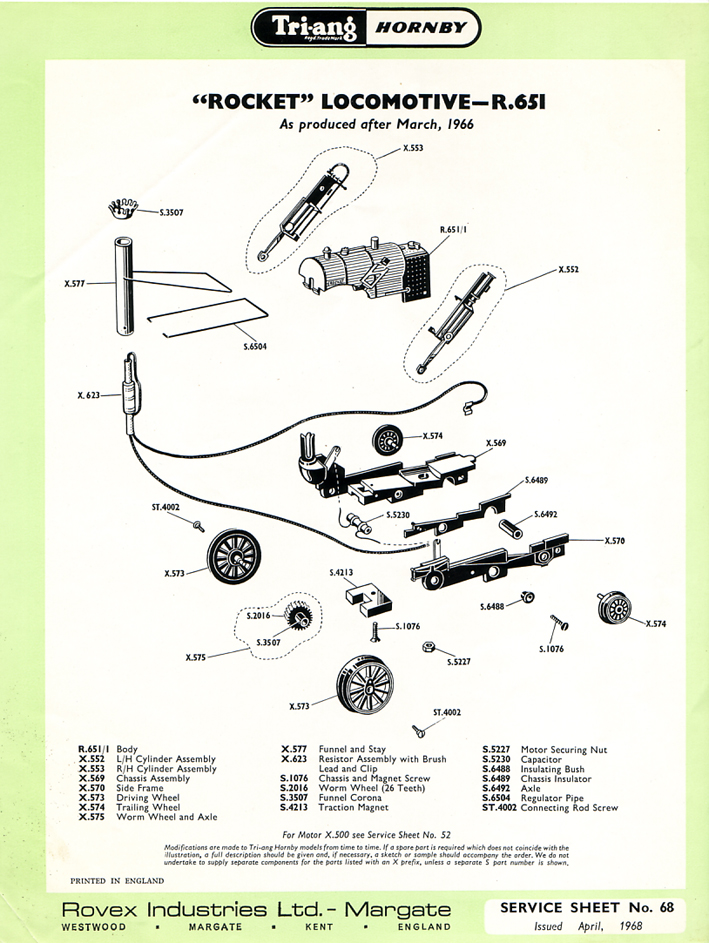 About ten years go there was a London Underground model doing the rounds of smaller exhibitions in the Midlands. If I remember correctly each track ran into a single turnback siding at each end. it used stub points and the coaches were four wheelers with dummy bogie sideframes hiding the deception. The shuttle was worked by a couple of Heathcote modules. There was a rather unprototype opening around one coach in length which allowed some vision, from the front, of the rear platform. I think there was only one driven axle on each train and power transmission seemed to involve small elastic bands. Acceleration and deceleration look quite respectable so I suspect there was some slipping involved, but it worked and kept the public entertained which was the object of the model.
Growing old, can't avoid it. Growing up, forget it!
My Layout, My Workbench Blog and My Opinions
Top

Thank you very much for the diagram of the Rocket- I'll have a go at it. Certainly can't bollox
it any worse than it is!

Thank you, also, for the descriptive of the subway module using Heathcote modules- another project
I am having trouble finding time/energy to circle back unto, but I shall!
I don't care what they say. I believe in Nessie.
Top
Post Reply
21 posts