Hi everyone,
So Some of you may have seen my post in the welcome section earlier on in the week, if not well I will catch you up a little bit....
Planned a small N gauge layout a long time ago when I was still living with my parents. As they do circumstances change, I moved out, got married had a kid and converted a barn into a home...now I have a dedicated space for some trains, and I upscalled to oo.

So the base boards have been built and a plan has been sort of drawn up. 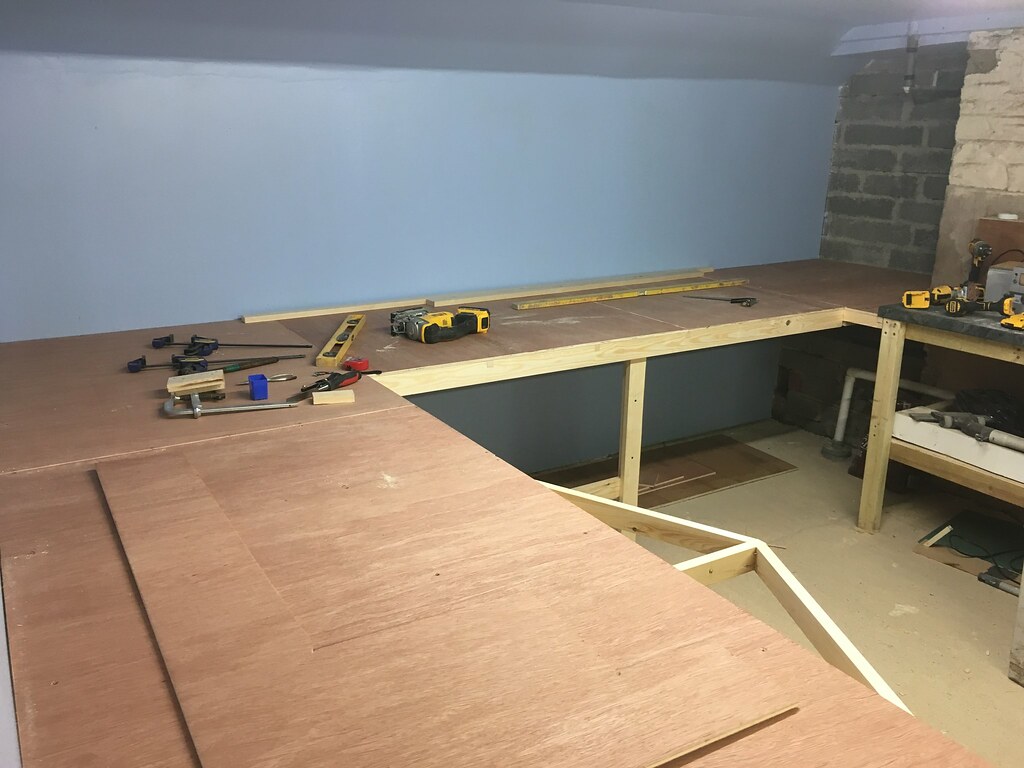 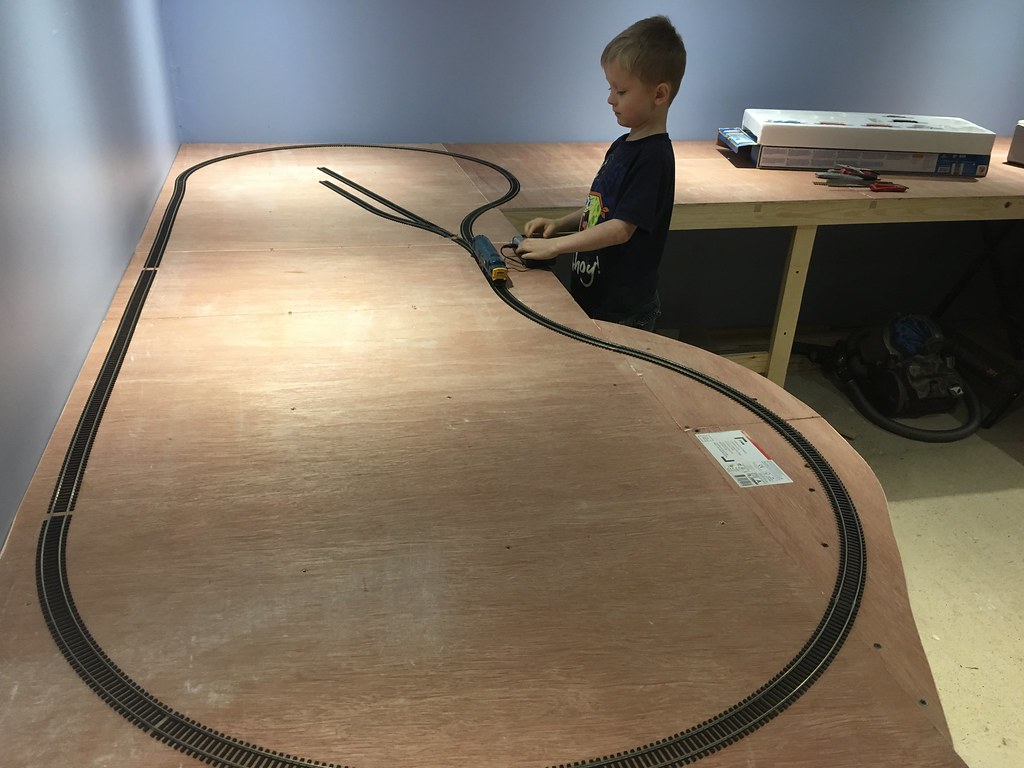 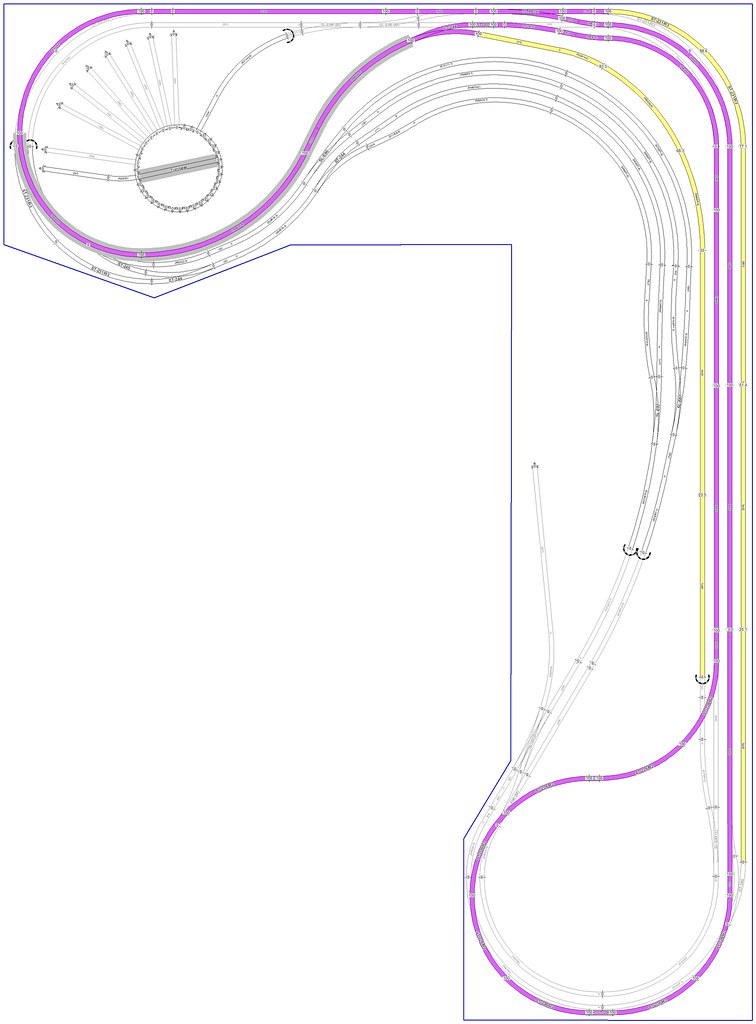 Untitled by Joseph Ellis, on Flickr
There is a two track main line on the bottom layer, with the purple track being about 100mm above, the yellow track are the up and down ramps. Measurements are about 3.5x2.8 meters
So that’s hope fully caught you up to about lunch time today....if you have any questions comments or ideas please post away
Top

Welcome to the delights of OO, nice bit of space you have!
A couple of points for discussion are your inclines (3m with bends is pushing it), read my guide and and have a think.
Second point is access, both to the back of the wide board and when the track is under the hill.

Lovely space there, looks like a great modelling room. One comment to add about the plan, you have included a good few curved points, these are known to be troublesome, I would advise seeing if you can avoid using them, that said they cause most issues when running steam locomotives, if you are running diesels you might get away with it.

Even diesels don't really like them. Mind you, some curved points were ok but most I had I ended up looking at ways to alter the track plan to avoid using them. I would use them for sidings so that my main running lines were reliable. Sidings didn't matter so much. Also old worn or battered track was used for sidings to save on costs.
Top

Ah! I can see the pictures now. ( I looked previously and could not see them.)

As others have mentioned, a great space for a layout. Looking forward to further progress reports.

Double post
Glencairn
To the world you are someone. To someone you are their world.
I Cannot Afford the Luxury of a Negative Thought
Top

A great space for a layout.

I would concur with others about reach. Cleaning the track is a tedious but neccessary evil and you need to be able to reach all if it to clean it.
Inclines? I wouldn't have a clue.

Great space for a layout, I look forward to see your progress!
Top

Thanks for all the comments, really encouraging to read!
I realise that the reach may be tricky, the base boards are about 900mm wide, I can reach the back wall, and with a step reach it a bit easier, but I may try to alter the plan to bring the track closer to hand.
The two gradients are about 3% according to scram. I’m planning on using the magnetic power track thingy, I forget it’s proper name, to improve traction and pulling power from the start, that will hopefully Give it half a chance to begin with!
My only real concern is the track that is covered under the lower levels. I’m going to plan on having this accessible using removable scenery, but I also realise that not all my ideas workout as I want them!
Top

An exciting project. You may not need the magnetic thingie. It all depends what length trains you use and what is pulling them up. Those modern all wheel drive diesels will pull and pull so will not be an issue, but some steam locos, single end drive diesels or little diesel shunters may struggle pulling longer trains up steep inclines. Mind you, even single end drive diesels used to manage 4 coaches (If the traction tyres had not gone old and hard) up quite an incline on one of my previous layouts. The main issues you may have all things considering are modern coaches uncoupling and/or derailing where they come off or onto the gradient. Older model coaches will rarely pose a problem as they are generally very well behaved and are built to take sharp curves and bumpy less then perfect track. Modern stock is more refined and not made to cope with imperfections. It is a trade off between realistic looks or practical running, where a few of us prefer practical running, but most prefer realistic looks. It is difficult (But not impossible as Mainline and Airfix used to come close) to combine both qualities in one model though todays approach seems to assume that everyone has room for wide radius curves and buys perfect new track....
You could adopt a single height plan which will also save on the cost of track. Umm. Mind you, the challenge of adding a gradient does add an extra challenge to driving the trains which can be fun.
Top

Wish I have that much space I can use for my own layout. Ha.
Although on mine I can access most hidden parts from the back I still had to create 2 removable top parts of the landscape for easier access.
I want to see how you get on.
Please keep posting progress.
Thanks.
Top

One thing I'd recommend is trying to avoid S bends. For example, top right of your plan you've got your purple tracks that 'wiggle' right left right. It would be more prototypical (not to mention more reliable in avoiding derailments) to slightly remodel it to take out the middle bend. You'd end up with more sweeping curves, which I think I would prefer if it were my layout. In the real world I think trains would need to slow down more for S bends - probably not an issue on a model railway though as your passengers are less likely to spill their drinks!

Something else to consider, given the long sweeping curves you've got, is superelevation. That's where you angle the track bed slightly so that the trains lean into the bend.
Frontington & Backwoods Railway: https://www.matthewdawkins.co.uk/catego ... way-build/
LocoSound - sound effects for DC model railways: https://mafu-d.github.io/loco-sound
Top

Overall I like the think the track plan looks like fun! I take it your planning a round house off the turntable? And it seems you can have a few engines running around at once with room to have others waiting so the interest will be very good. I look foward to seeing your progression.
Top

Thanks for all the comments guys,
It’s been a while since I’ve made any updates so I’ll try to catch you up over the next few posts.
I did start laying track and got just under half laid, then the summer time arrived, which I spent working on the farm and spending time with the family.
I always envisioned that I would need to share the space in the train room with other stuff, I do most of the maintenance on the farm and workshop space is always handy, but the reality is other then some tool storage I haven’t used it all summer.
So instead of having a round the wall layout I’ve turned it into a triangular loop layout,


Now to sort out the new track plan!

I like the idea of superelevations minipix, it’s something I wanted to incorporate but somewhere along the lines, forgot all about them!
Top

Good luck with your venture. I look forward to seeing the layout evolve. I am currently in my 15th year of development on mine (Clackwick). If I have learned anything about our hobby it is to sleep on any proposed activity for at least a few days before committing myself.
Top
Post Reply
23 posts