Discuss model railway topics and news that do not fit into other sections.
Post Reply
35 posts

When I was a lot younger and just before getting distracted by Motorbike and girls on my want list was Hornby's 75 ton Cowans and Sheldon Cranes.
Now back into the model railways, I see these cranes on eBay and its got me thinking.

These crane's are more toy than model with the working the boom and hook operated via the little wheels (Not scale). So to my questions!

1. Are there any detailing kits?
2. Which livery would be right for 1959 - 1964 period?
3. What was the most recent available from Hornby & Catalogue Numbers? (note question 2)
4. Is there much difference with the older ones and the new?

Does anyone know of any difference between Hornby's R739 and R6104 apart from Catalogue numbers
Never enough time...........
Top

Apart from metal wheels on the current (yellow) release and a much better paint job (prototypical or not), the rest of it looks very much like my R739 did years ago.
Portwilliam - Southwest Scotland in the 1960s, in OO - http://stuart1968.wordpress.com/
Top

Did not Hornby renumber most (or everything)? Hence different numbers for the same item.

The crane in the 'Thomas The Tank' range looks the most realistic (to me).

I have three cranes of different types. Actually four as one is Hornby Dublo.
One is the large crane by Hornby. The second is a Lima crane now sold by Hornby. The third is the Hornby 4 wheel crane which I believe first came from Triang. Fun things.
Top

I have rebuilt the Hornby R127.
I have been looking at the Dublo version and maybe that is the more detailed starting point to choose.
The Lima crane is a lot more detailed to start with (From pictures of the model) But I can't find what the prototype is? 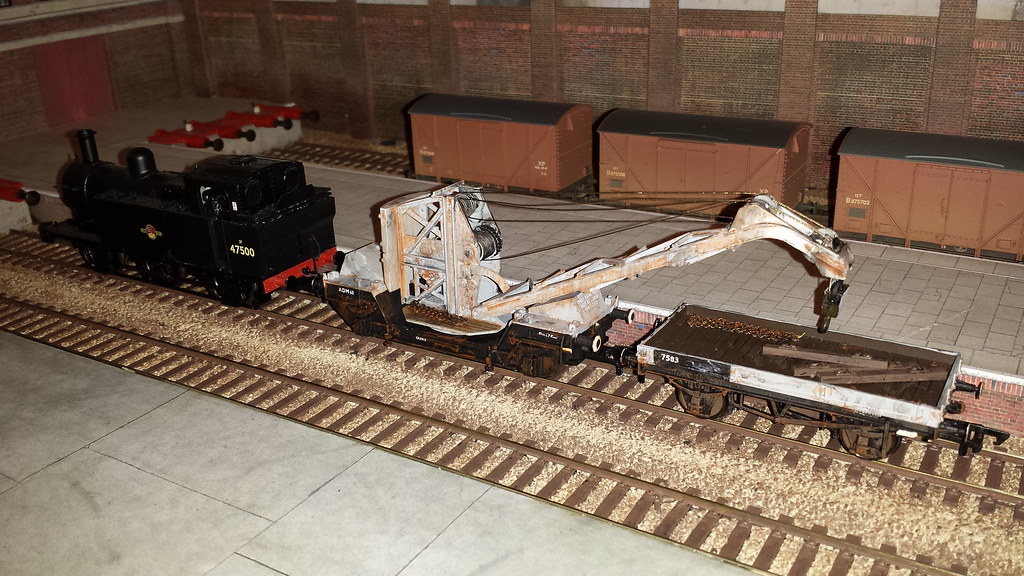 From what I've read (Regarding the Lima crane) is that the crane part itself was based on a prototype but the neat looking match truck type wagon that goes with it was fictional, so concentrate on the crane if looking for the prototype.
Top

£212? That would buy me an entire fleets worth of scratchbuilt waggons! :p
I hope it looks good. Does it work on DCC like the Roco crane did? (I think it was Roco who did a DCC crane?)
Top

Most (all ?) cranes in 1959 would have been overall black. However, when the 75 tonners were ordered from Cowans Sheldon under the Modernisation Plan red was specified, apparently in an effort to boost morale in / recognise the efforts of breakdown gangs. A lot of the larger cranes were repainted red from then onwards, as were tool vans, riding vans etc, although many remained in black.

So if you're asking about breakdown cranes generally, the answer is red or black depending on which crane and when. But the 75 tonners were red from delivery in 1960.
Portwilliam - Southwest Scotland in the 1960s, in OO - http://stuart1968.wordpress.com/
Top

Another question, if I do rebuild one and repaint it are there any water-slide decals available.
Never enough time...........
Top

Tom@Crewe wrote:Another question, if I do rebuild one and repaint it are there any water-slide decals available.

Make inquiries with this guy https://www.cctrans.org.uk/index.htm

Thanks Timberwolf I have been in contact with him and he can't help on this occasion
Never enough time...........
Top
Post Reply
35 posts