Have any questions or tips and advice on how to build those bits that don't come ready made.
Post Reply
39 posts

I have acquired a Bachmann 0-4-0 Porter from the USA - it was only $60 (new) with decoder fitted (although shipping and customs/vat pushed the price up somewhat). It looks very good - though VERY American of course: 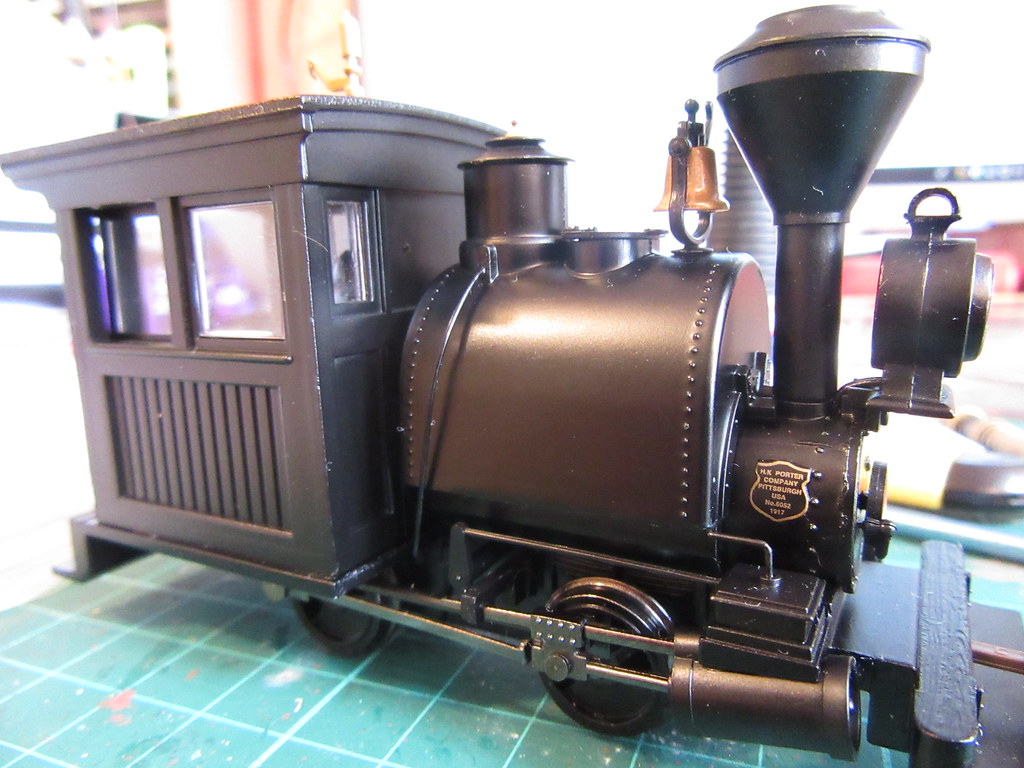 I described the improvement in running I got from replacing the factory-fitted decoder elsewhere but this entry is to Anglicise the loco, and to this end I have purchased a 3D printed replacement cab from CWRailways and some parts from Smallbrook Studios. With these and some plasticard, lets see what I can do! Watch this space...
Old N layout
0-16.5 workbench
Micro 0-16.5 layout
Top

I have started butchering the Porter

First I removed the foreign-looking horizontal steps from front and rear buffers. Wow the metal was hard to cut! My poor little cordless Dremel really struggled - must get some better cutting discs for it. Anyway, rear buffer now looks like this: 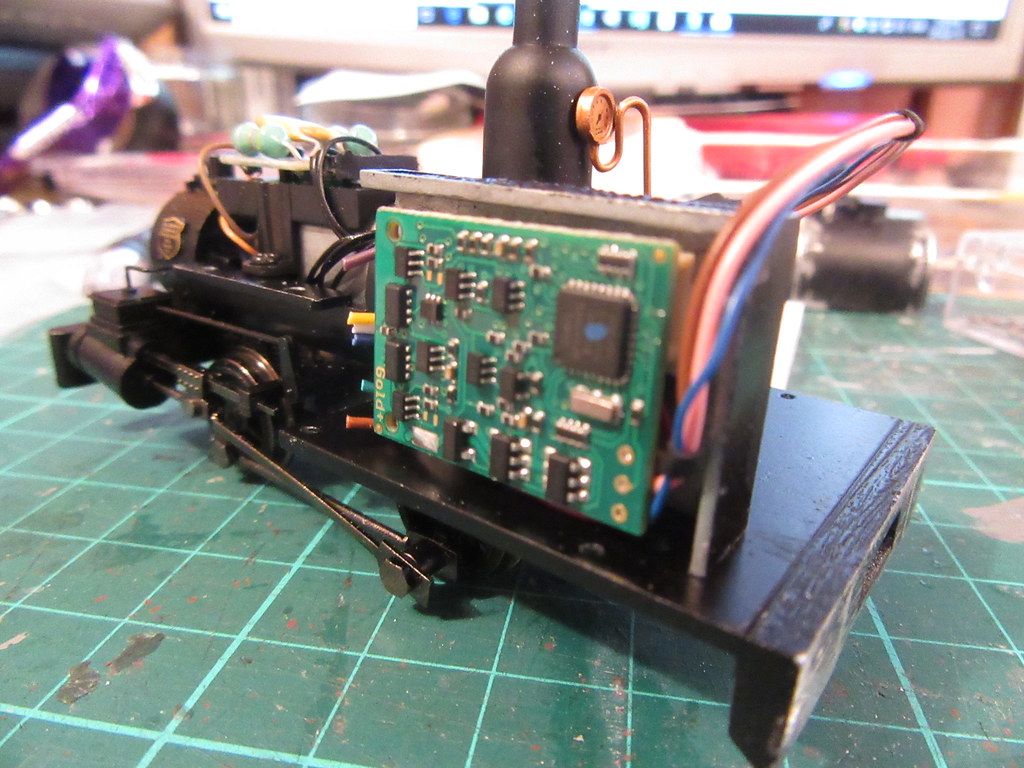 I also removed the heavy metal saddle tank from the loco (attached by 4 screws) and removed the bell. More hard metal to file down: 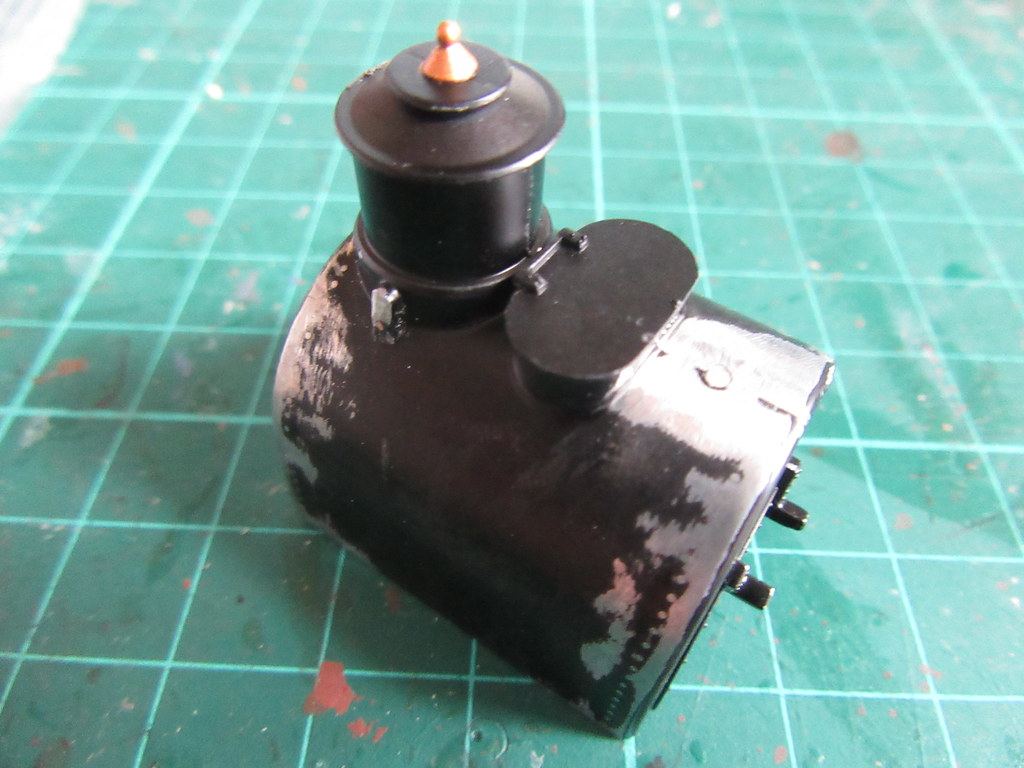 I then looked at the parts I had purchased. First the 3D printed cabin from C.W.Railways. Having discussed with the proprietor Tim, it became clear that his cab was longer than mine and intended for the 0-4-2 Porter

. We agreed the cab looked a bit over-sized for a British locomotive, so Tim was most helpful and offered to shrink the length to my dimensions. The wonders of 3D printing! Here are the parts as supplied - and yes the length fits my loco: 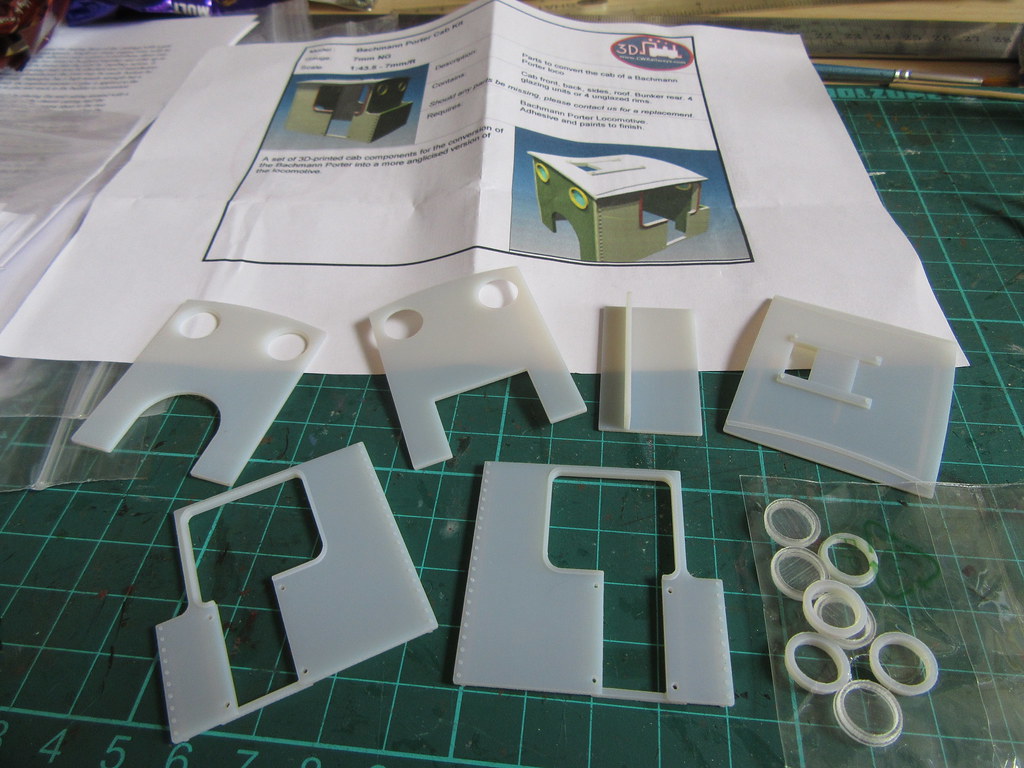 I have also purchased a chimney and smokebox door with dart from Smallbrook Studios: 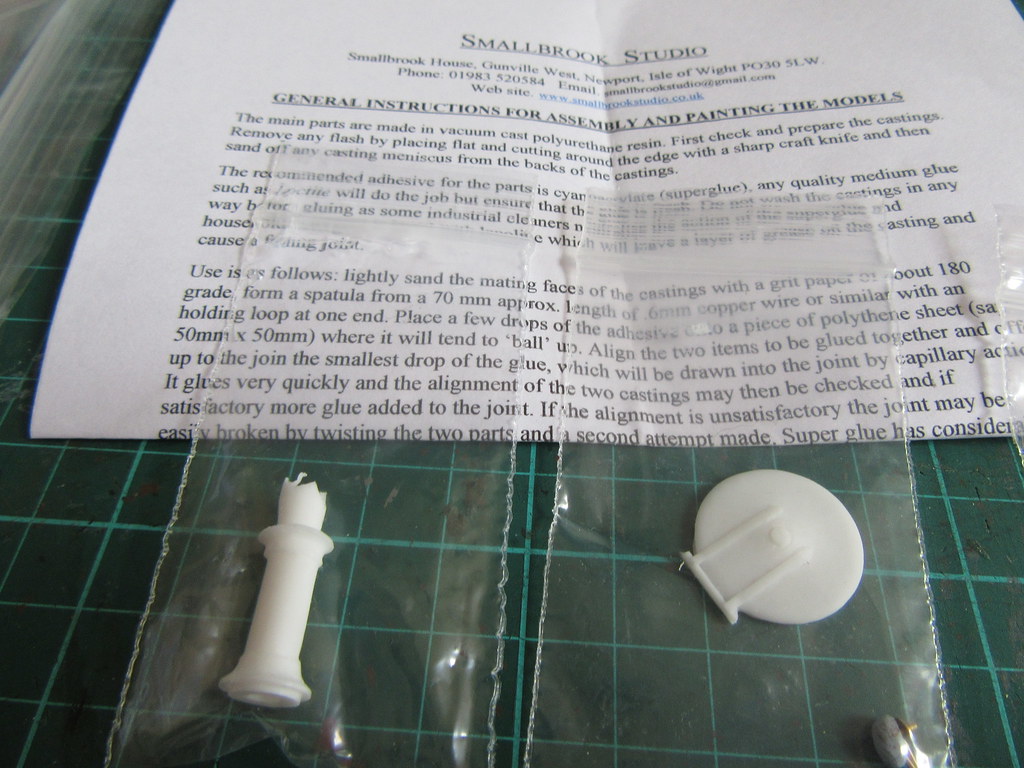 Right, so if you're currently anywhere in India or further east (which pretty much covers all my fave parts of the world BTW

) then its already the 1st May. So I reckon I'm allowed to start my competition entry

. Unfortunately I'm stuck in an absolutely freezing Blighty, so what better to do than some modelling?

So, I began by constructing the main shell of the cab from the 3D printed kit from CWRailways: 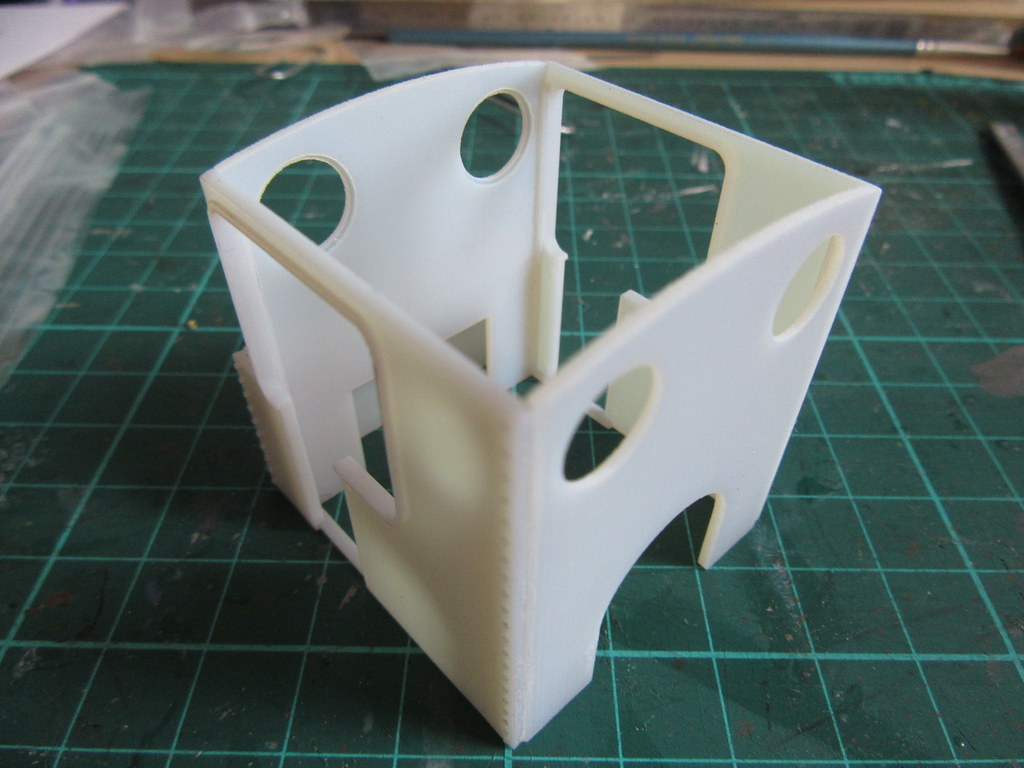 Went together very easily with a nice snug fit. First coat of sprayed primer, a bit of sanding and filling, and then a second coat: 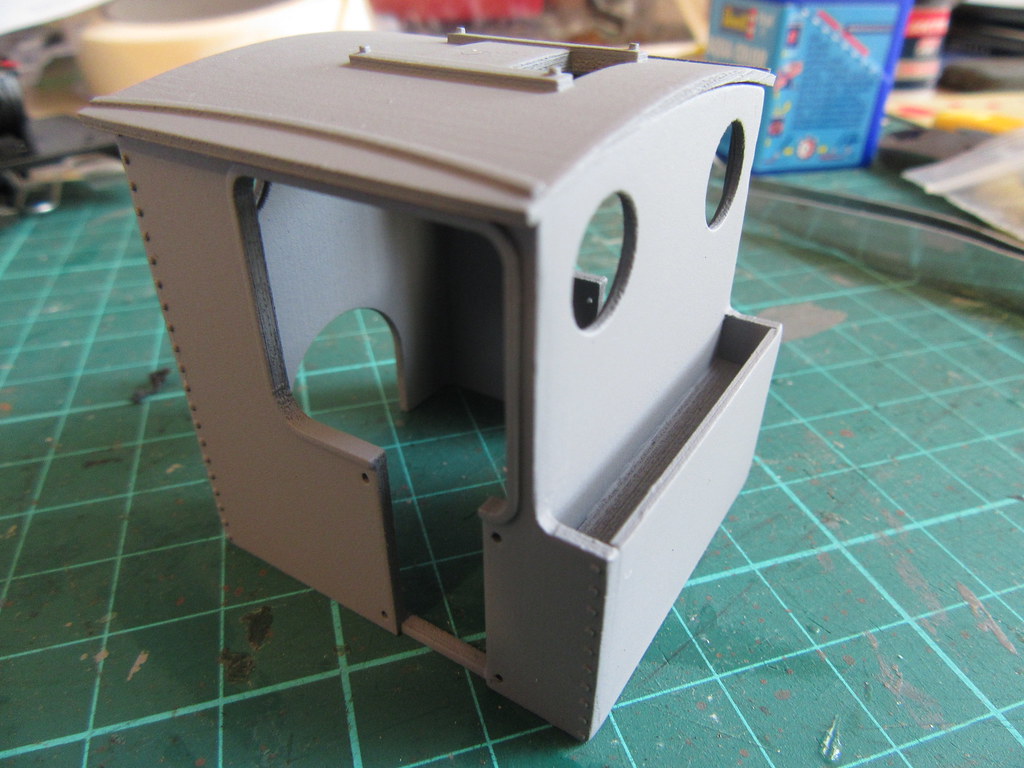 I also primed the saddle tank and just placed both parts on the chassis to see what she looks like: 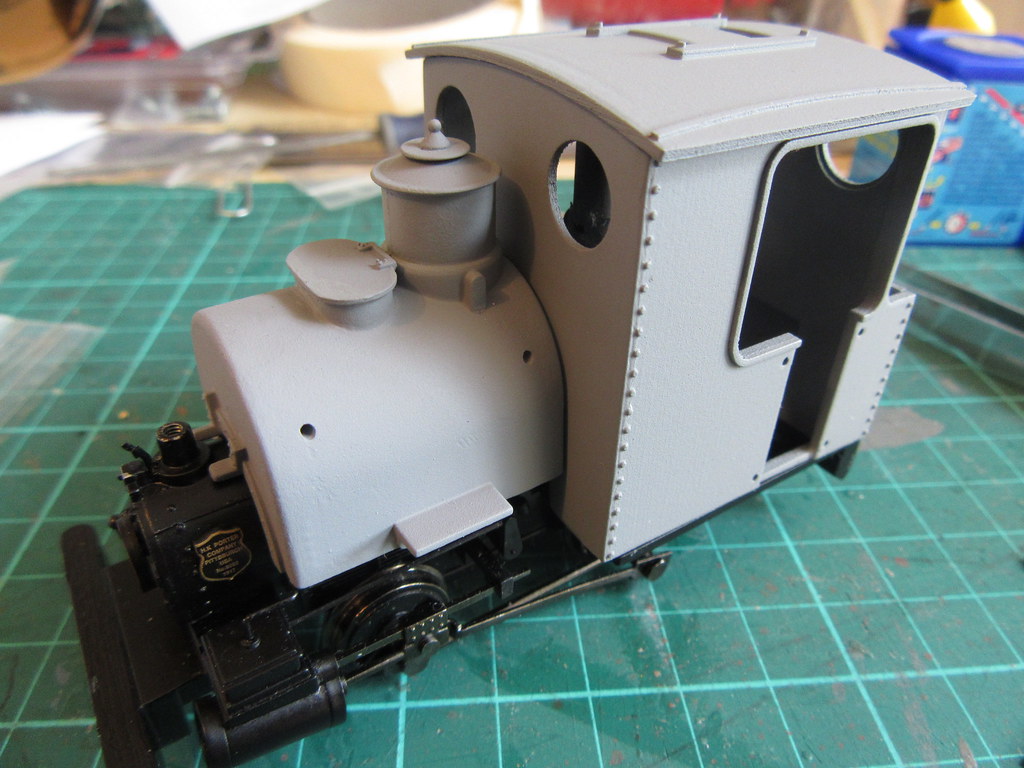 This view from the front shows what my next step must be = to put something over the diminutive low slung smokebox - work for a future update . . . 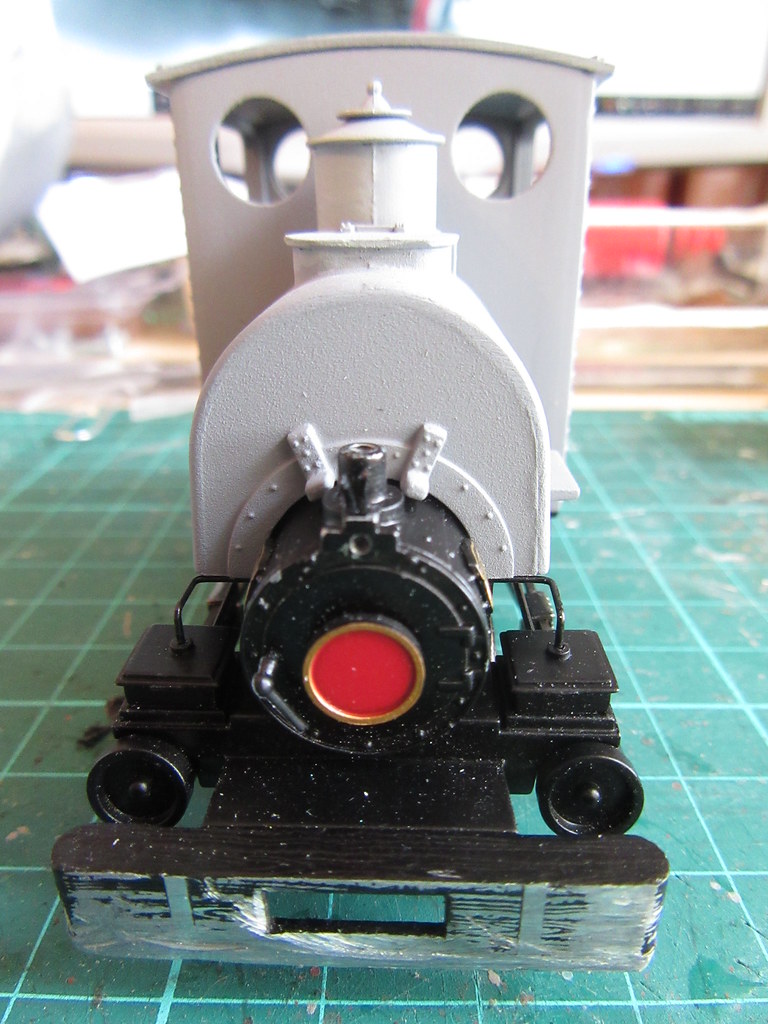 As I said in my last post, the cab was reduced in length before printing by Tim at CWRailways - it fits my Porter pretty well, but it does mean, with the rear coal bunker, that the backhead protrudes a very long way into the cab and there is not a lot of room inside for the driver behind it

. But I knew this conversion would require some compromises and I am hoping this will prove to be an acceptable one . . .
Old N layout
0-16.5 workbench
Micro 0-16.5 layout
Top

I constructed a simple smoke box out of plasticard - it had to be a little larger in diameter than fits the loco due to the size of the door I have (from Smallbrook Studios). 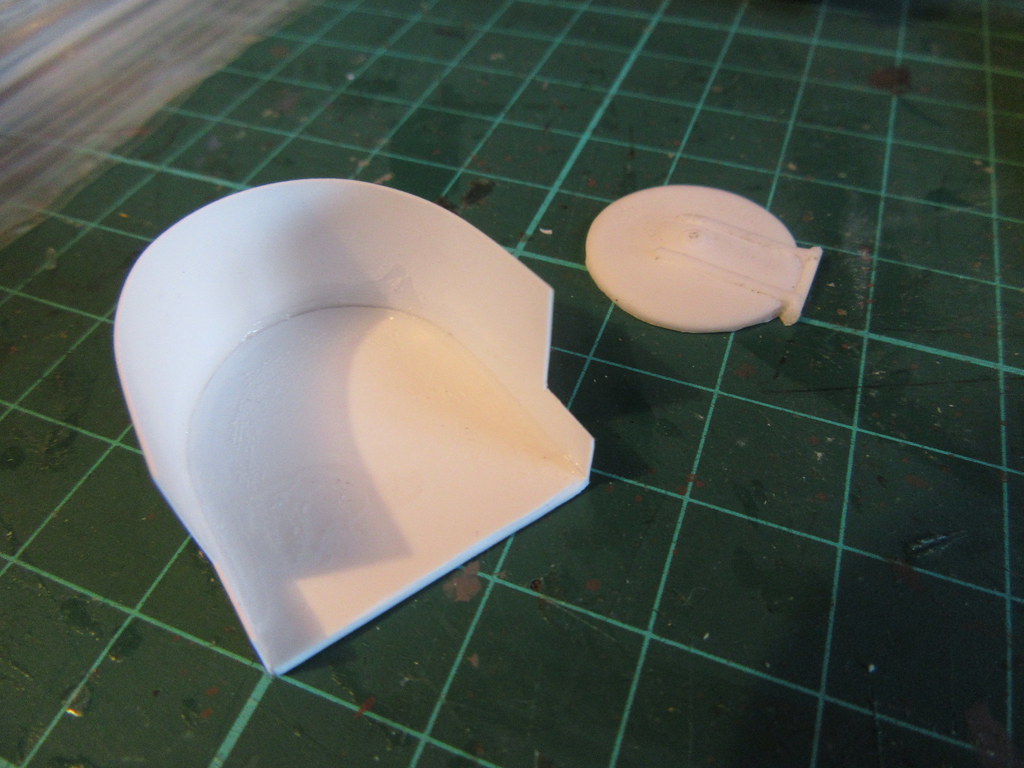 This was my first attempt with a chimney just sitting on top to gauge how it looked: 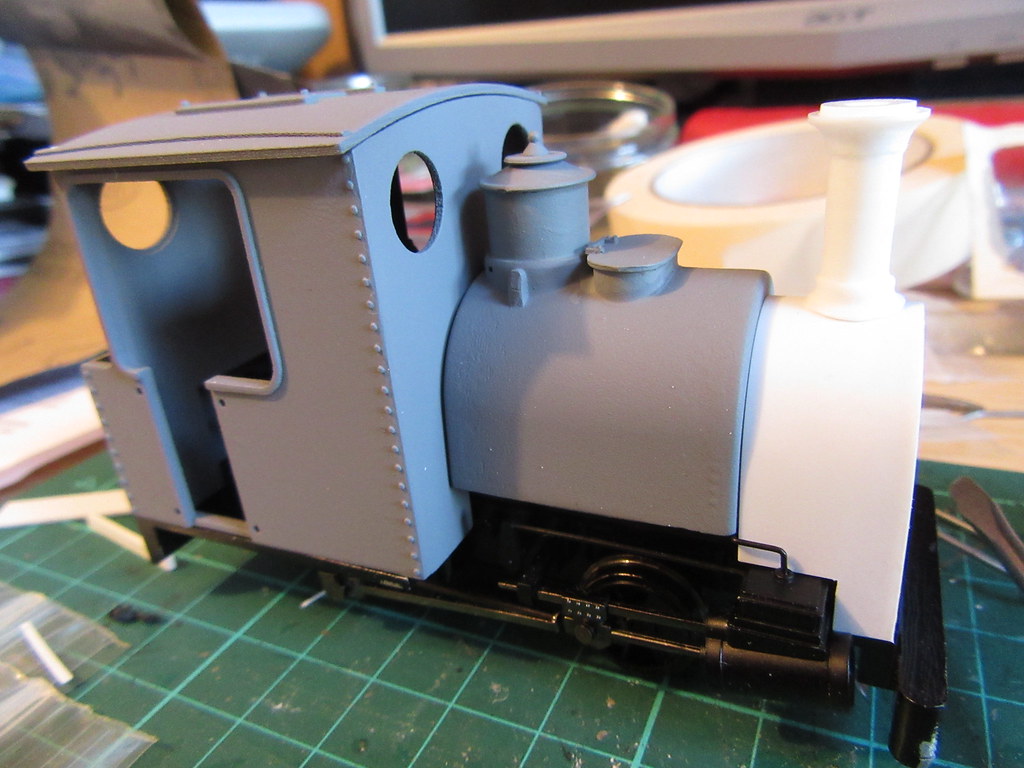 I decided the smoke box was too tall compared to the saddle tank, so l shaved a bit off the bottom! 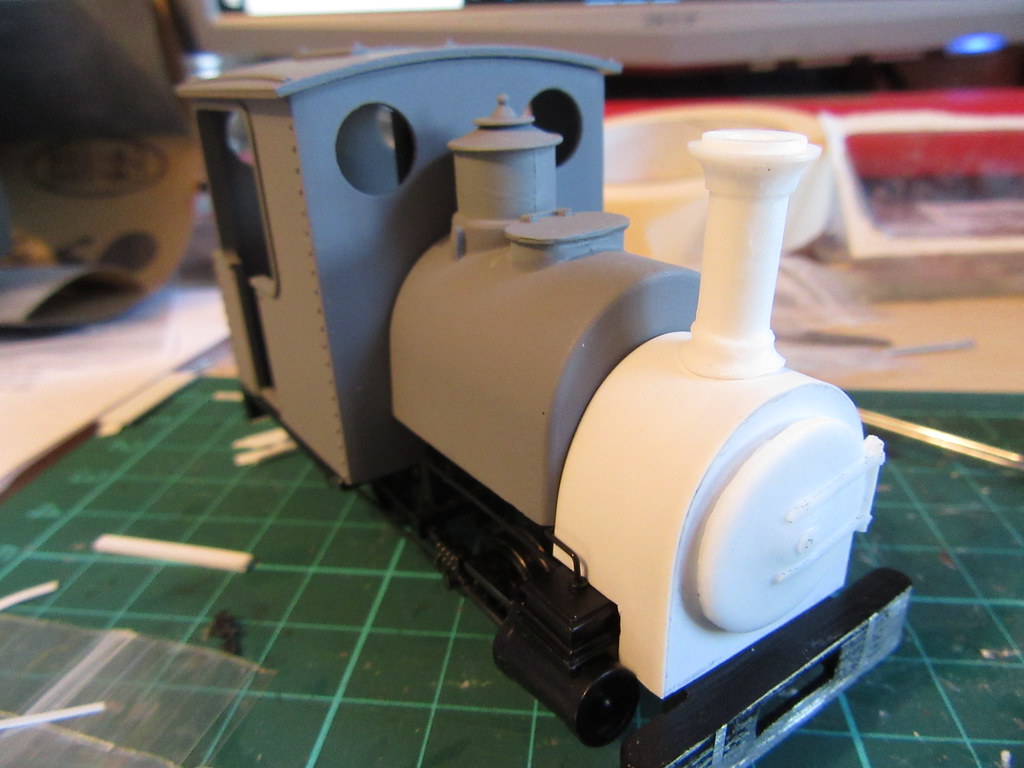 But now I thought the chimney (from Smallbrook Mars) was too short! So I tried another taller one from a Smallbrook Echo kit: 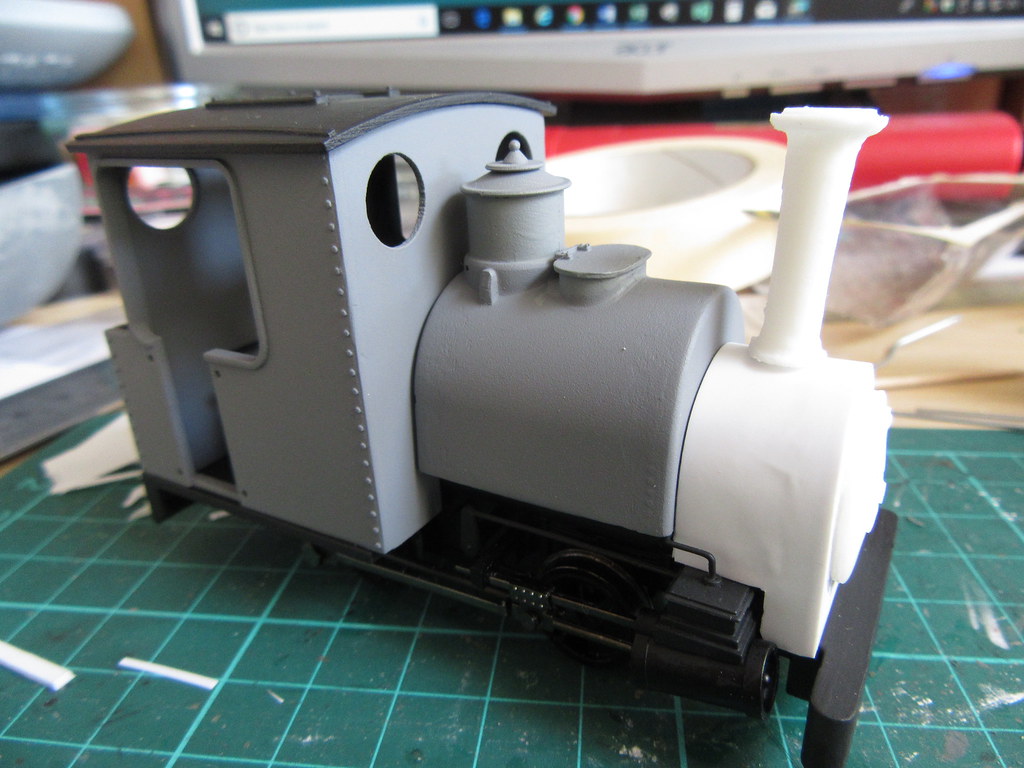 And this is how I think I will proceed - a couple more views: 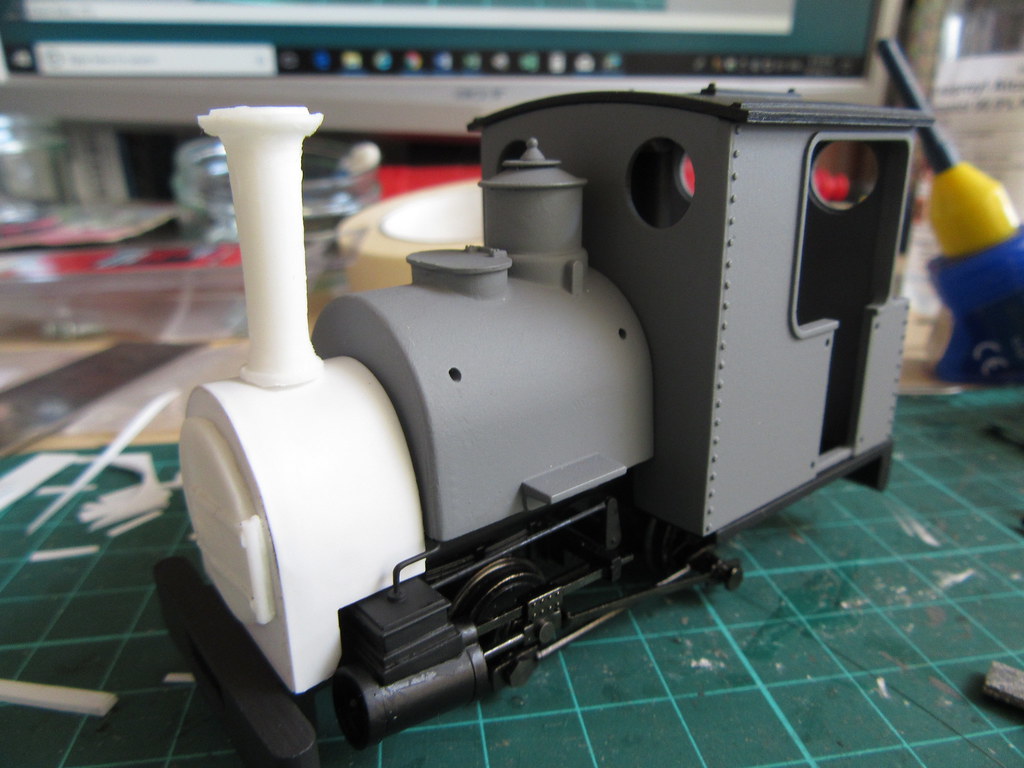 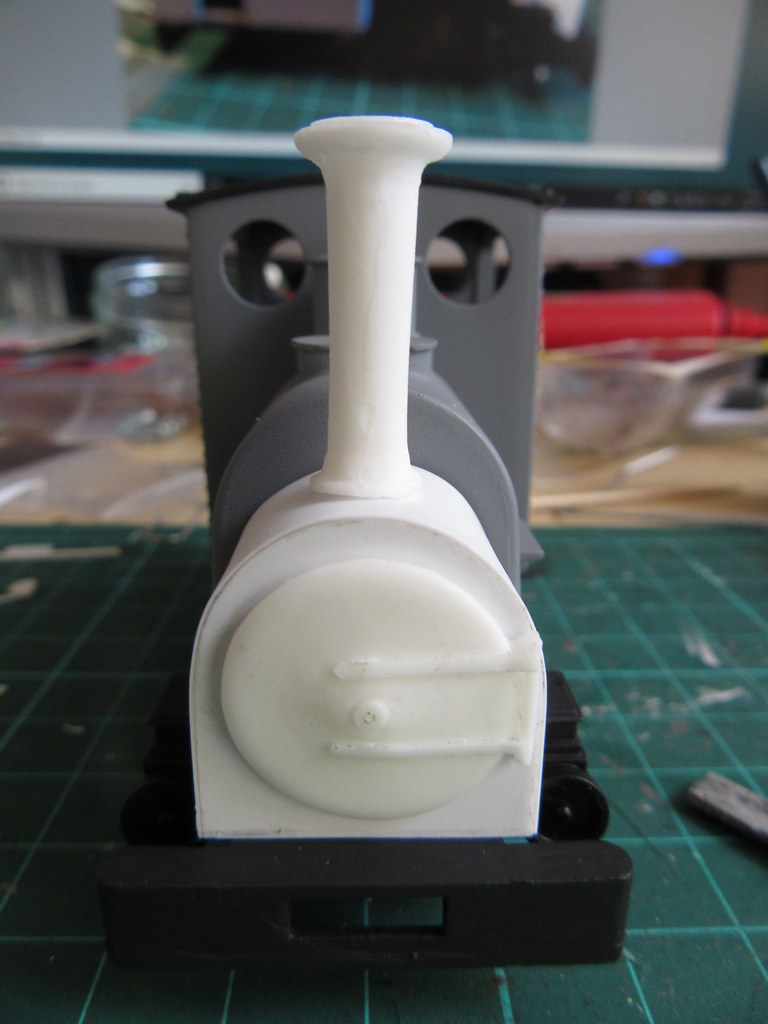 Wow! Nice work PNP, the difference in the look of the locomotive now is incredible!

Charming little loco, don't forget to paint/detail inside the cab before you glue it all together!

Thanks for comments - the shiny new plasticard has now been primed . . . 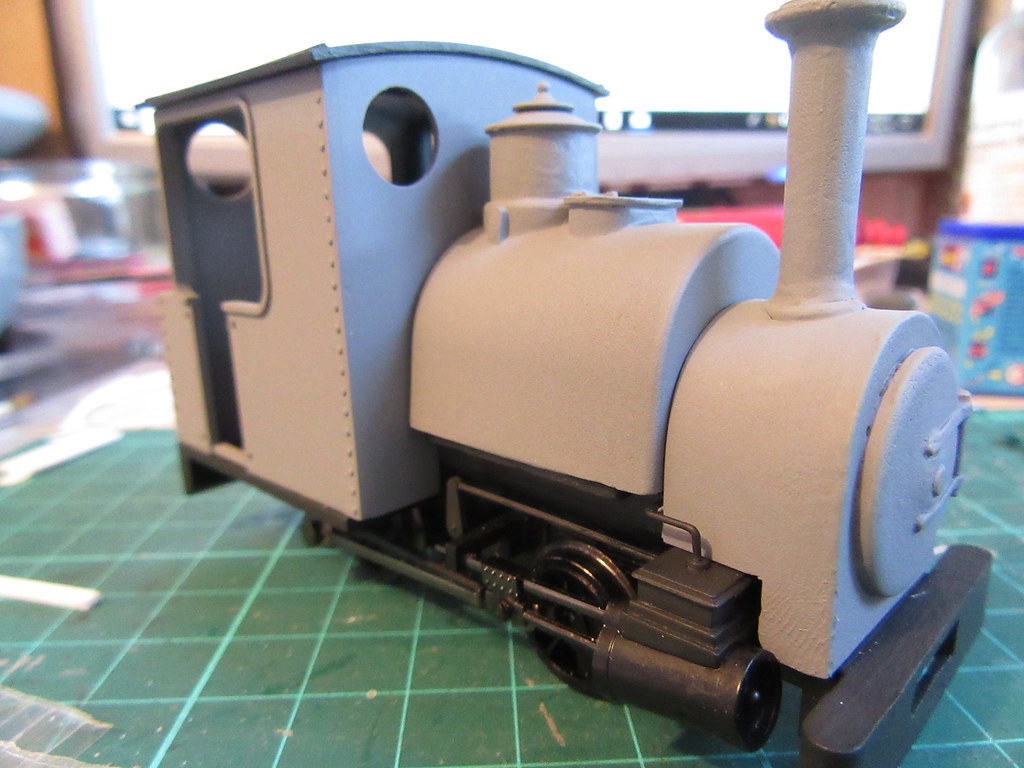 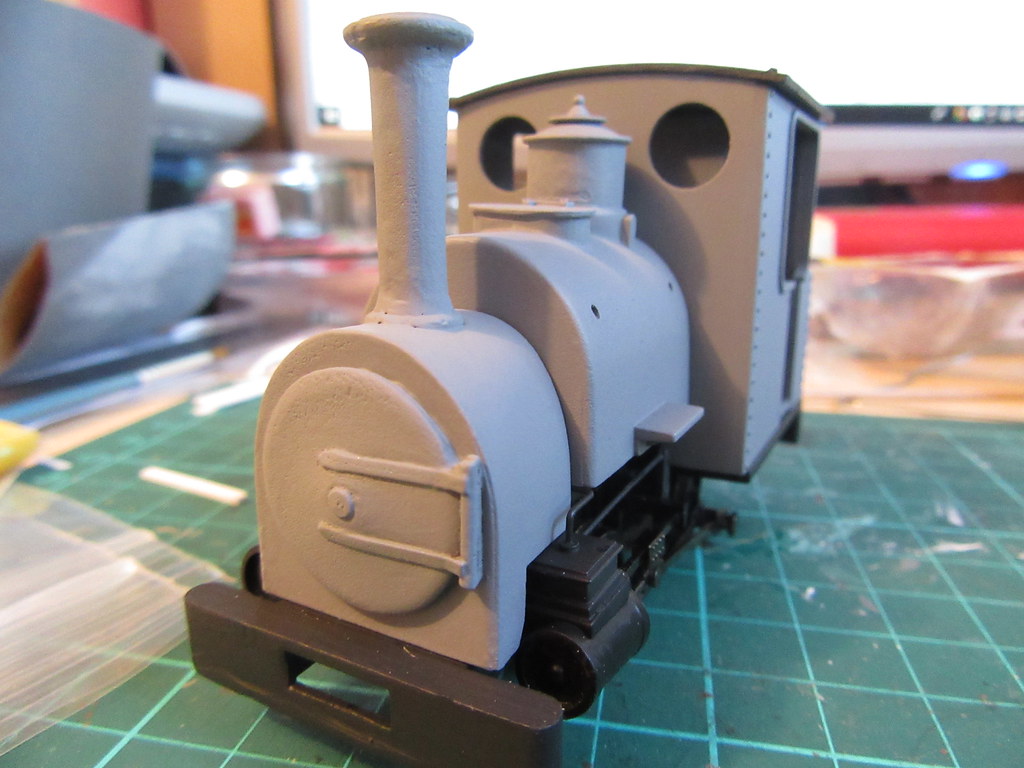 And a more representative look after first coat of black: 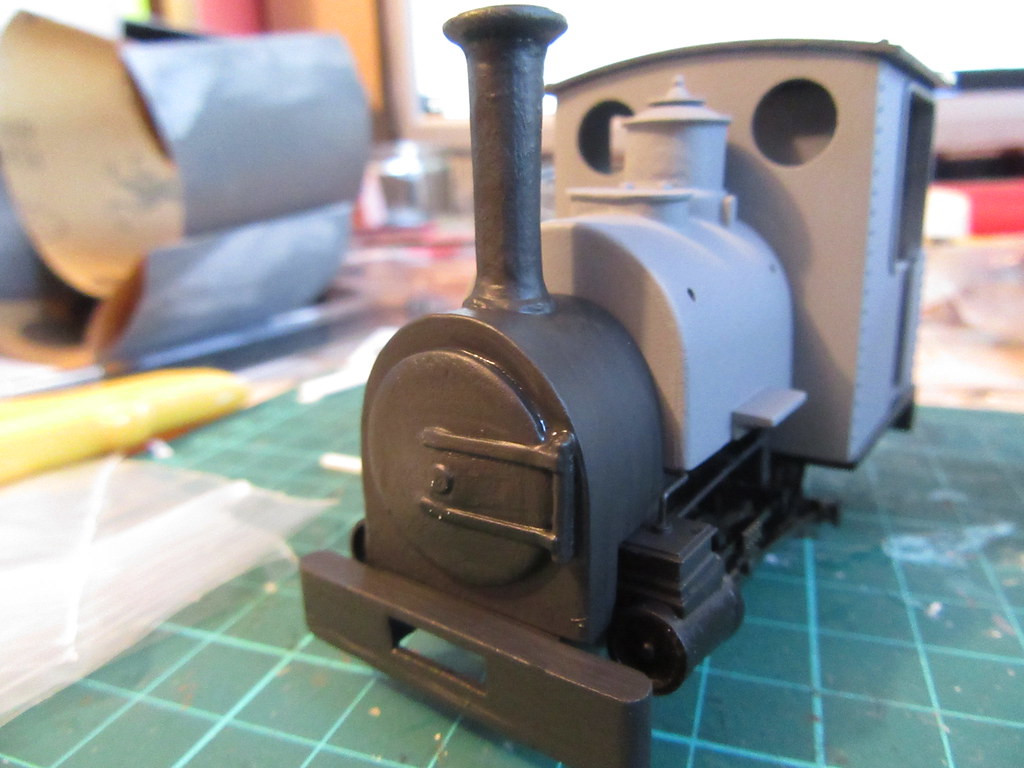 I have to say the loco is looking brilliant!
Top

I decided I wanted a bit of red on my (yet to be started!) railway, so chose Revell Carmine Red for this locomotive. Revell acrylic spray paints do not seem to be as good as Humbrol, but Humbrol do not have a large colour range in matt. Anyway, it took 4 coats of the red to achieve decent coverage, followed by a coat of matt varnish: 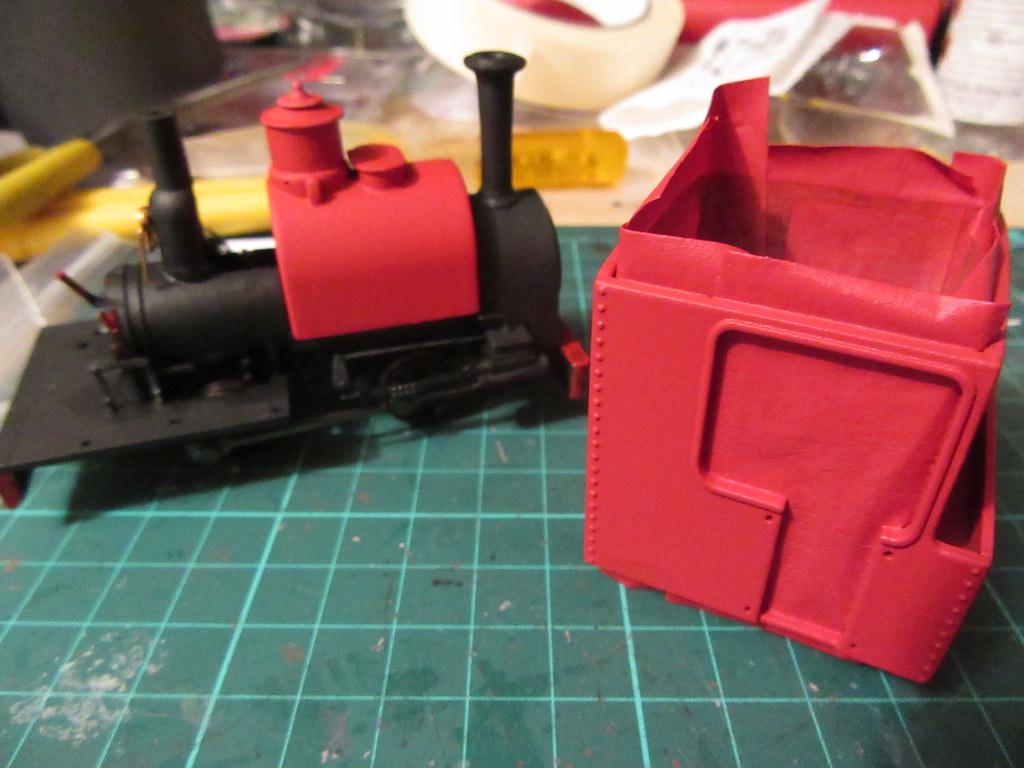 After removing the masking tape, but before cleaning up and touching up I have this: 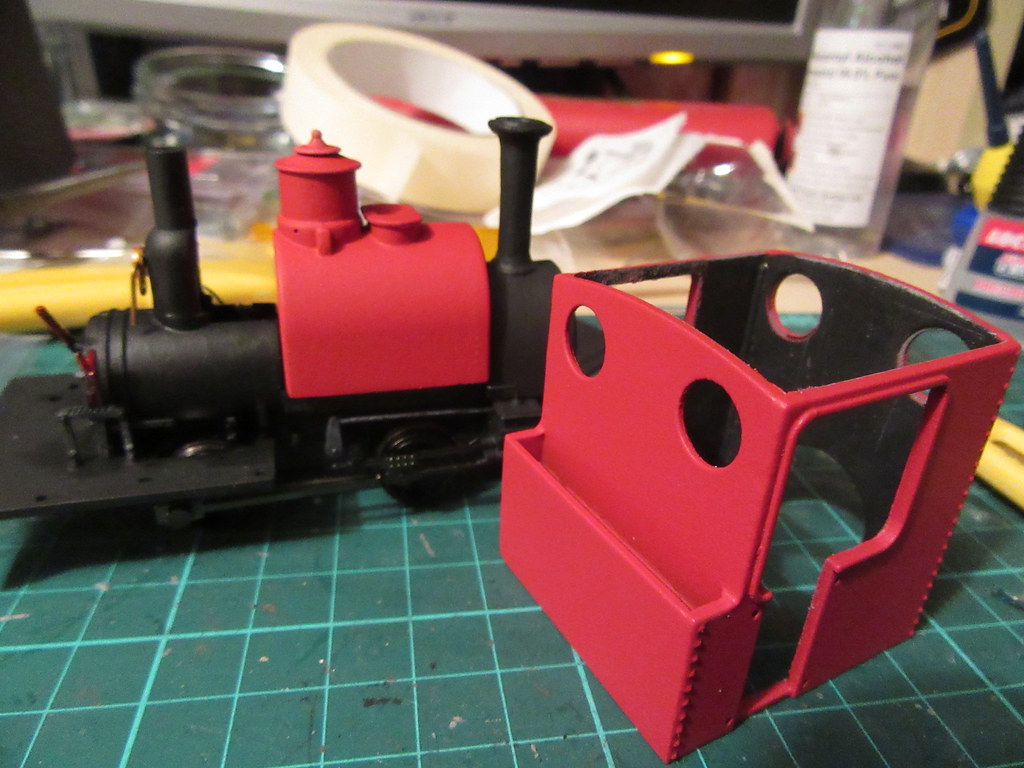 I had thought the red would be a bit darker, but never mind. Once its toned down with some weathering powders I'm hoping it'll look the part . . .

i donno i think its a really nice shade of red for such a loco.

It looks Pink to me!

TimberSurf wrote:It looks Pink to me!

Yeah, luckily its a lot more red and a lot less pink in real life

I did some more to my Porter project today, but Oh Dear, suffered a couple of setbacks.

SETBACK #1: First of all, whilst touching up the inside of the cab, I managed to drop the damn thing

and it broke into three pieces

!!! A couple of choice words were uttered and then I set about repairing with superglue. Its not too bad - the breaks are above the doorways just below the roof so will hopefully be largely hidden by the shadow under the small overhang of the roof. I knew the 3D-printed pieces were weak at those points, but not THAT weak!

Anyway, I continued with the build: painting the window inserts brass and also the top of the chimney the same colour. The window recesses needed a tiny bit of filing to accept the windows, but then they slotted into place nicely. So nice to be able to get a really clean line between brass and red - because they were separate pieces! 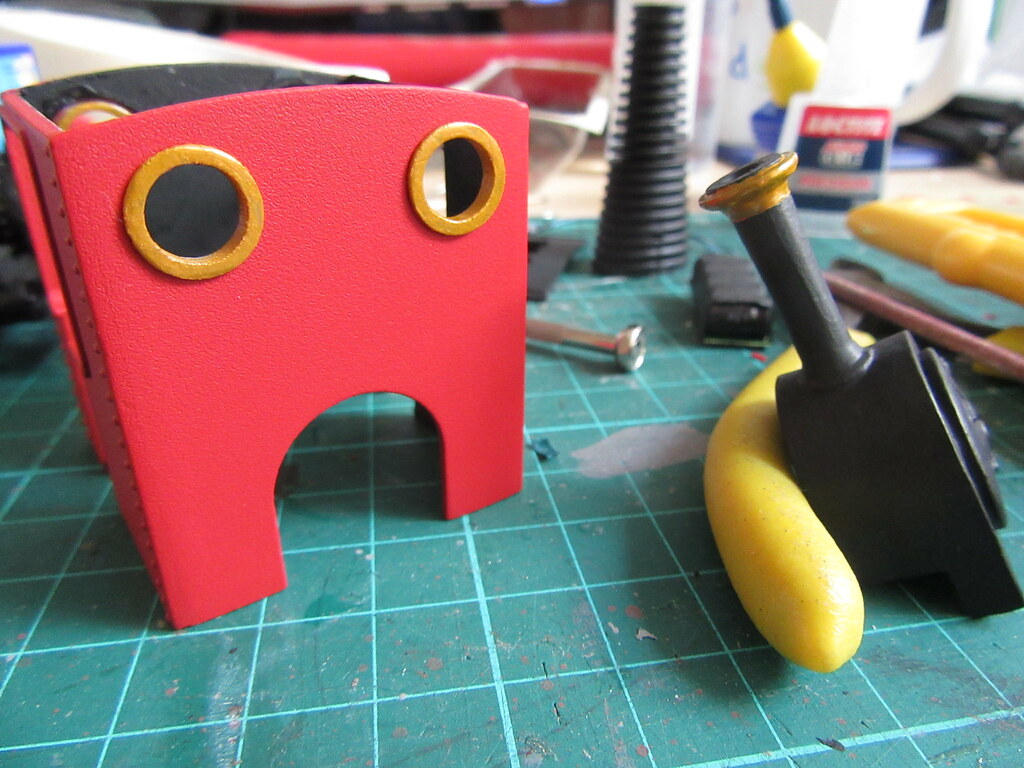 A little while ago, despite being so pleased with myself that a Lenz Gold decoder fitted in the same space as the terrible factory-fitted one I was replacing, I then realised that my replacement cab meant that the decoder protruded right across the doorway

. The new cab is a completely different shape, so of course the old location was not suitable! That decoder was too large to hide elsewhere in the cab, so I purchased a TCS M1 (the same one I used in the tiny Simplex) but with a different-shaped stay alive that I measured could also be hidden in the cab. So I soldered the 4 connections to the M1 and . . .

SETBACK #2: The loco did not run

. Absolutely nothing! More choice words. I double-checked the wiring = correct. I ran another loco on my test track = fine. Hmmm. So I quickly unsoldered the TCS decoder and re-soldered the Lenz one = still nothing. More choice words! I thought "I can't even try the loco on DC as it came DCC-fitted and I don't even still have the original decoder!" Then I was thinking that there was no way I could send the loco back - it was shipped from the USA and has been butchered so much by me since, so that's not an option.

. So I unsoldered the decoder, dug out my old DC controller, and connected it to the orange and grey wires to the motor = still absolutely nothing. Thinking the very worst now, as a last resort, I spotted contacts on a little circuit board where those two wires were connected just above the motor. Placing my controller leads on those two contacts = YIPPEE! The motor ran very sweetly!!! A bit more experimentation revealed the grey motor wire on the loco was somehow not connected anymore. Quickly a new wire was connected to the circuit board contact, the TCS decoder reconnected, loco placed on the test track, and = nothing yet again. WHAT? After some frantic checking with the DC controller again, swapping decoders (in case I'd burnt out the TCS somehow), I noticed that the power to my test track had become loose!!! OMG!

So, FINALLY, I have the TCS decoder connected with the stay alive, and the Porter is running up and down my test track nicely! Phew! I decided not to proceed with shortening the decoder and stay alive wires and working out how best to fit in the cab - that can wait until another day. They say accidents come in threes - so I'm definitely counting the track power connection mishap as the third!!!
Old N layout
0-16.5 workbench
Micro 0-16.5 layout
Top
Post Reply
39 posts