That is looking good. Will be looking to see what colour you will paint the main coat. One thing I love about watching people build these kits is as they are mostly freelance kits, each person brings their own style and livery to them, which is a refreshing break from the conformity of following an exact prototype livery. I love this approach as one can build ones own railway company which actually challenges one to learn more about prototype practice's then if one had made a direct copy. There are decisions to make like "Will I adopt a central buffer or twin buffer design for my railway?" and "What will be my acceptable loading gauge in height and width, and what will be the sharpest radius curve I will use?"
All these aspects bring character along with a sense of realism as every aspect one has thought about and considered just like a comitee of people who set up a little railway company would have done.
Top

Mountain wrote:That is looking good. Will be looking to see what colour you will paint the main coat. One thing I love about watching people build these kits is as they are mostly freelance kits, each person brings their own style and livery to them, which is a refreshing break from the conformity of following an exact prototype livery. I love this approach as one can build ones own railway company which actually challenges one to learn more about prototype practice's then if one had made a direct copy. There are decisions to make like "Will I adopt a central buffer or twin buffer design for my railway?" and "What will be my acceptable loading gauge in height and width, and what will be the sharpest radius curve I will use?"
All these aspects bring character along with a sense of realism as every aspect one has thought about and considered just like a comitee of people who set up a little railway company would have done.

I agree - I have never modeled a particular prototype, or worried how closely I follow the 'real thing', as I like to use my imagination. So to go completely freelance is even more liberating. I think subconsciously it is one of the attractions of narrow gauge for me. Of course this horrifies some people, and I respect their views, but each to their own

My goal will be more to capture the atmosphere of what I'm trying to create, rather than to replicate a real life place. And a narrow gauge railway seems to offer some real character in all of: locos, rolling stock, buildings etc. Of course I still want it to be realistic and look like a railway, just not a (part of a) particular railway.

I decided on humbrol 80 'grass green' in matt for the colour for this loco. So I sprayed three coats onto it and then started to pick out parts in tar black, red and brass. The last two colours were washed-on to avoid them looking too bright - though I will be weathering further in due course. This is how it is now looking: 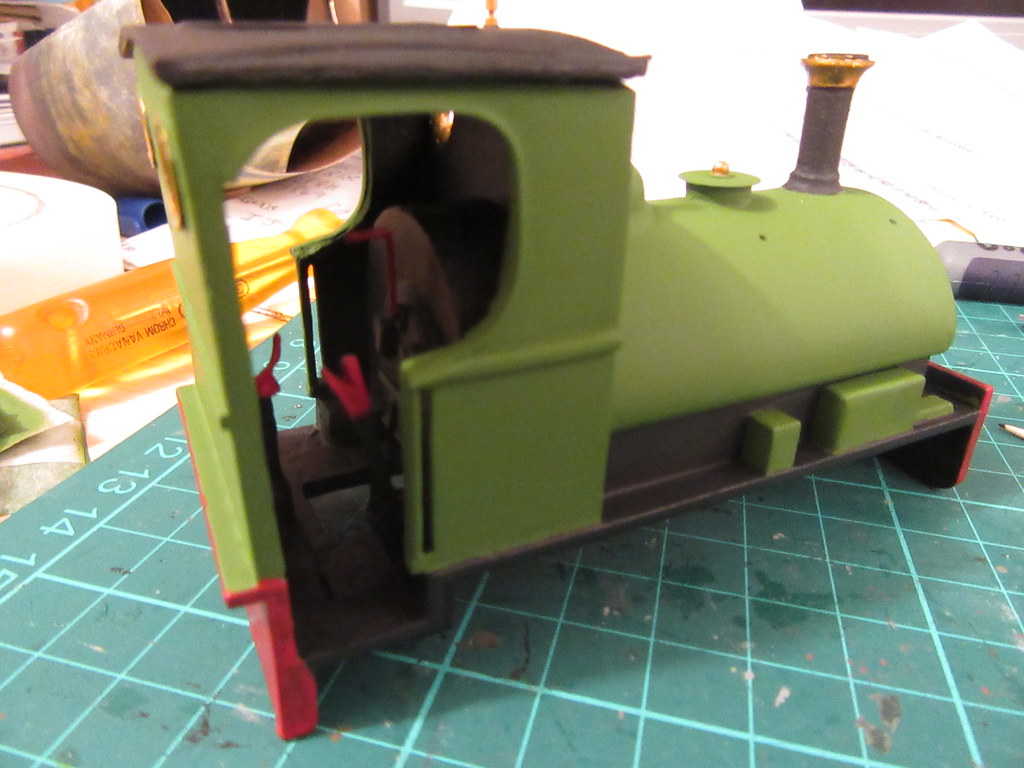 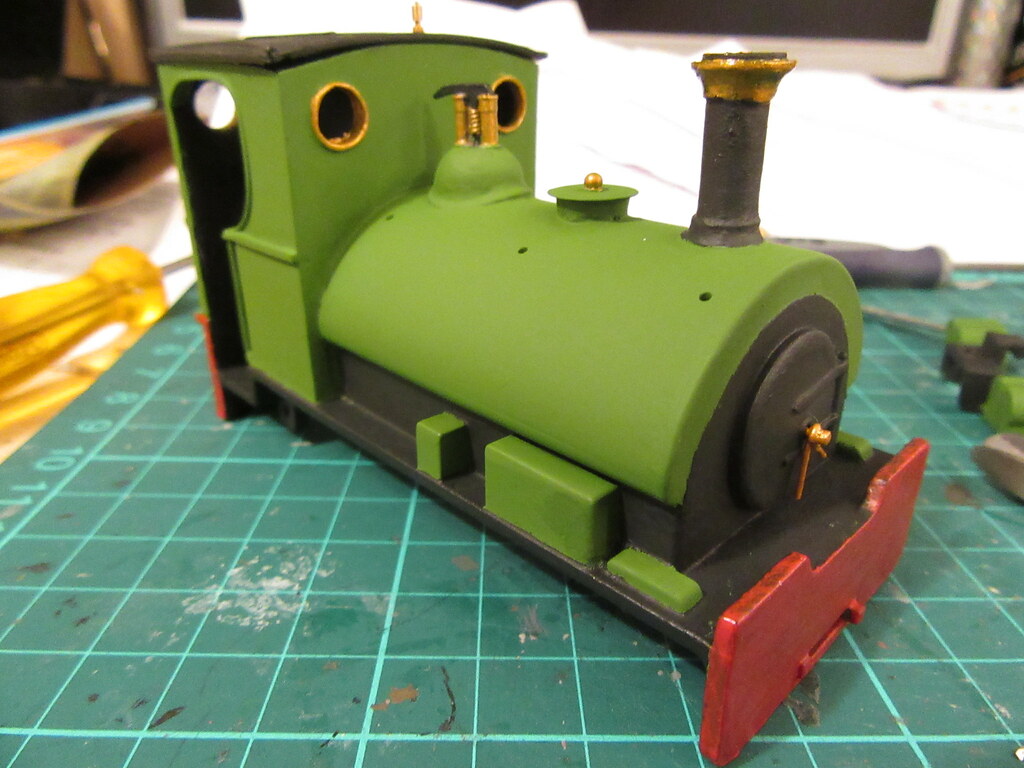 The first one reproduces the real colour in the photo much more closely than the second, and I think I am happy with it. The cab roof is just resting in place at the moment, so will fit more snugly when fitted properly. Moving on next to hand rails . . .
Thanks for reading.
Old N layout
0-16.5 workbench
Micro 0-16.5 layout
Top

That does look good.

It is well worth taking your time with these kits. While I expect it will be loco number 1, any thoughts about its name? On my little railway, I have a tradition of naming steam trains in the female gender and diesels in the male gender.
What about couplings and train crew? I have not yet painted enough little people up as yet to use as train crew on my locos.
Your loco is certainly looking good though. I'm impressed!
Top

Thanks for your continued interest Mountain

Yes it will be loco #1 prominently displayed on the cab side (easy for DCC address identification!) and I have ordered name and number plates from Narrow Planet. I will be naming my locos after departed family members, and like you, thought females for steam and males for diesels would work quite nicely! I intend to go with the supplied tension lock couplings for the moment. Soon I will be attempting to paint my loco driver, who seems huge (and heavy!) after N gauge figures - which I never attempting to paint

. I am also considering treating this loco to some sprung buffers - as I don't like the blocks that came with the kit.
Old N layout
0-16.5 workbench
Micro 0-16.5 layout
Top

Sprung buffers. Now that's fancy. I take it your model will have two buffers per bufferbeam. Not sure where you get 7mm scale buffers from, but they are bound to be available.
You will find there is room for an N gauge DCC decoder at the back of most of the 0-4-0 chassis if there is not enough room in the body. Locos like my Smallbrook Clio it is the only way unless one uses the cab.
While you've been working on your loco, I've been busy working on my layout, as I want to get it working to run my trains on.
Top

It's worth bearing in mind that very few NG lines in the UK used twin buffers as per SG practice, one centre coupling was the norm. If you do use them stick 'em close together like the Tallylyn, they look better like that!
Top

I think the main reason why so many adopted the centre buffer and coupling was that it worked better going round sharp corners. Some adopted the twin buffer because it worked well when the waggon frames would double up as buffers, so on the minor industrial lines of which most were propelled by a horse, this twin buffer design was popular except that all it was was the ends of the wood. Sometimes a metal band would go round these chassis ends to prevent the wood splitting. This design of simple twin buffer was very popular, but not so often seen on main narrow gauge lines which employed steam traction which the centre buffer became the more common method.
It did happen that some mixing of the two where one industry had internal waggons and they would meet the main line, but understandably, the loco would have two buffer types or the waggons could be used for more then one coupling type.
Like with 0-16.5 where quite a few different coupling methods are used, the prototypes employed many more types. The one I used to base my design on was the Welshpool and Llanfair Railway as the two breakaway safety chains dropped down and I used this look to form a metal loop instead, rather similar to the Corris Railway coupling loop but larger. My loop was going to be two chains with a metal cross piece but I opted for a metal loop instead for the convenience of making the things as there is enough work in making a simple coupling on my entire fleet! I still have many more to do as some still have the Peco type as used by Hornby Dublo and Jouef, and others have tension locks. If the Peco types were not so expensive to buy I would have used them as they are simple solid things and look as if they are meant to be there! I just saw the price and thought maybe not. My initial attempt to make my own didnt make valid use of my modelling time, why I turned to drawing pins instead.
Top

For your first foray in to 16.5mm gauge, PNP, this is looking like a real corker. The colour scheme of that little loco is just sublime. Has this wet your appetite enough to make the move?

Thanks for comments everyone. Re the buffers I have ordered a set of 4 and will see how they look. Yes b308 it was actually pictures of Sir Haydn and the other Tallylyn locos that made me think of getting some

Onwards with the build . . . I fitted the hand-rails. They were quite fiddly to thread into the knobs - and I found that the holes drilled into the knobs can't have been 100% straight as the knobs are slightly slanting for a horizontal rail. But I don't think its too noticeable. Painted black they look like this: 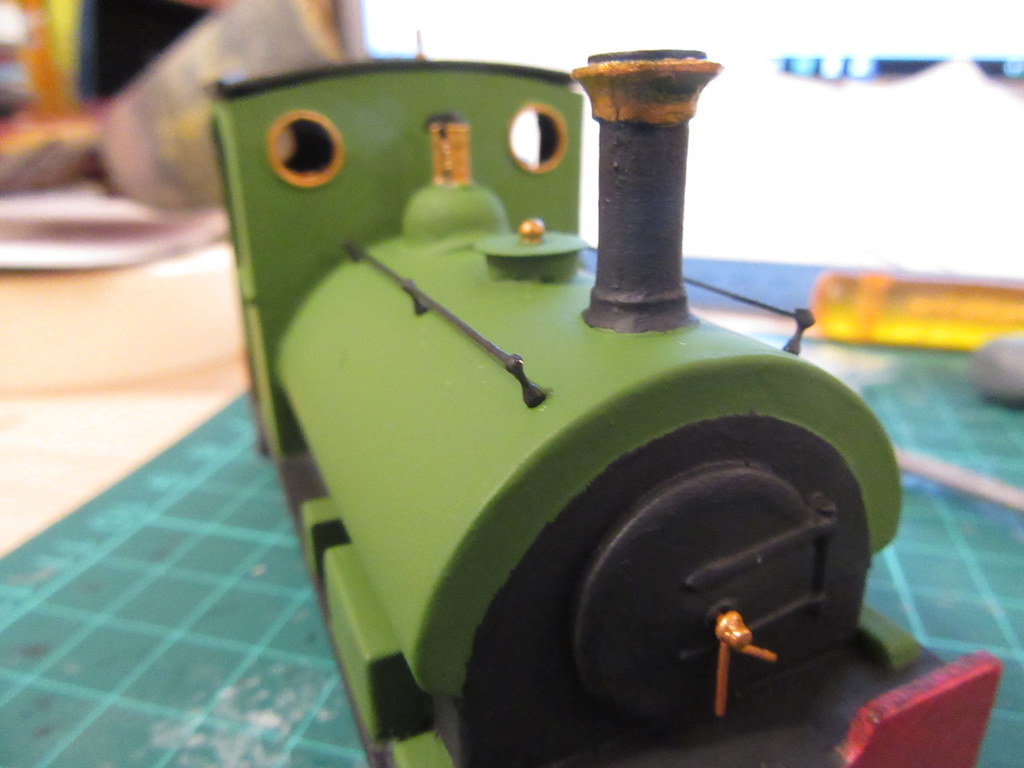 I then turned my attention to the driver, who came as a whitemetal casting with separate left arm that could be 'posed' appropriately. Here he is part-painted: 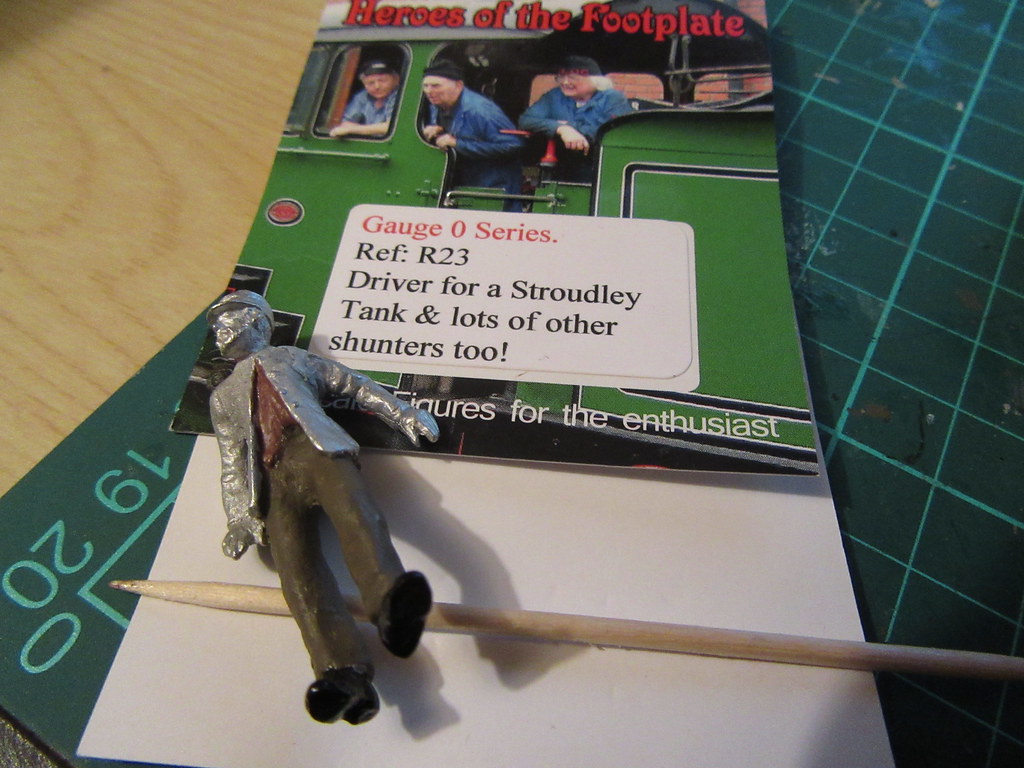 And here in position in the cab: 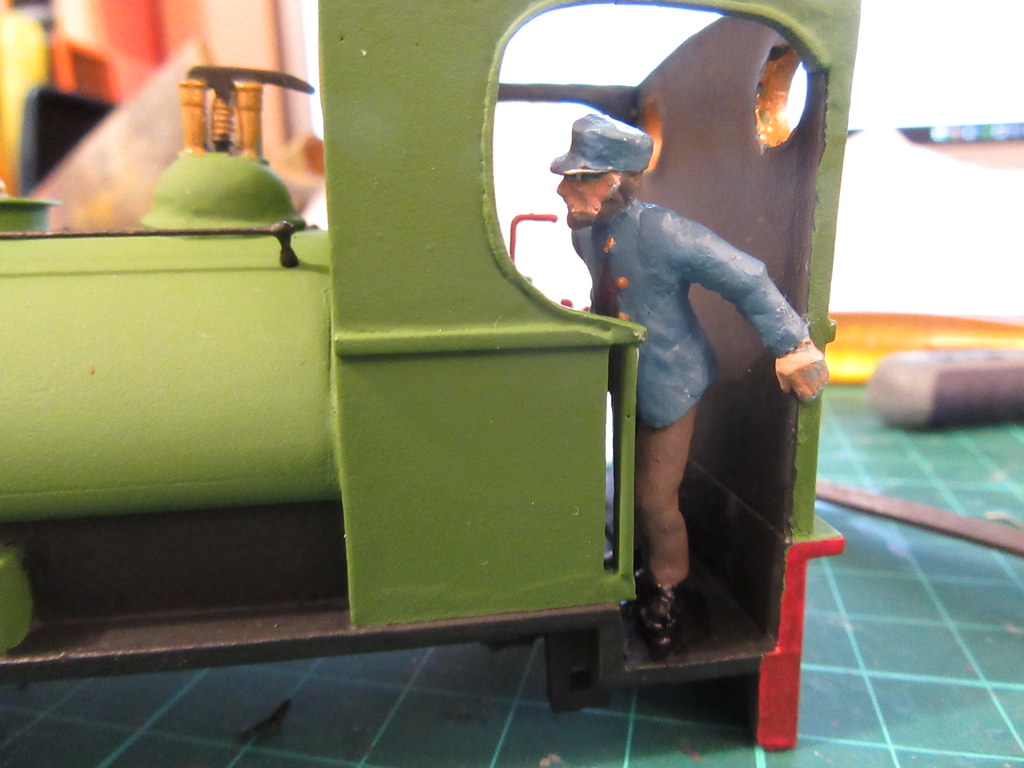 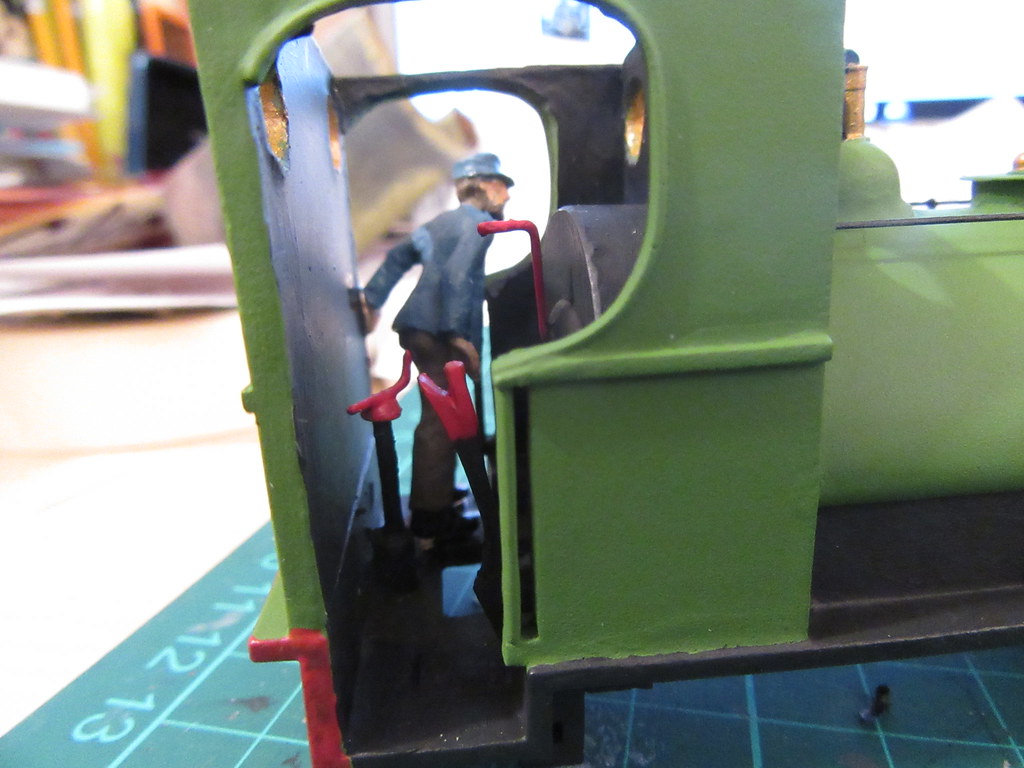 Wow these photos are brutal

- I must stop using macro mode! I think he looks ok to the naked eye

. I wasn't sure of the skin colour I mixed at first, but it dried looking recognisable as skin at least

. He's also surprisingly heavy, adding quite a lot of weight to the plastic body, not sure if I will need some lead to counterbalance . . . ?
Old N layout
0-16.5 workbench
Micro 0-16.5 layout
Top

Excellent work there. I love the guy you've painted as he looks quite a character!

Given your excellent work in N gauge, I have no doubt you would turn out some similar quality in a larger gauge, I am not disappointed. The engine is looking really good. Before I got to the bottom of the pictures, I was thinking that white metal driver would add to weight and my mind wandered to do the same in OO, well perhaps not

I cant wait to see you start the layout.

I've been prompted by this thread to have a go at an O-16.5 loco or two, as that was in my "future idea" list anyway.

The body's height was unchanged, but markedly shortened.
I also took 5mm off the width, but in retrospect that was more effort than it was worth, unless absolutely necessary to fit an existing loading gauge.

Having played and posed with the loose pieces I think I'm going with the 0-4-0 this time.

"It's his madness that keeps him sane."
Top

That really looks good Emettman. It looks very promising. I'm not sure if I prefer it as an 0-6-0 or an 0-4-0.
Some of the things I've made have me thinking "Would I make another one?" after the project needed more work then I thought! Mind you, the results of such projects usually give something so unique that it is worth the effort.
Top

While visiting a site I've used before, for myself and for "stocking filler" Christmas presents, I came across a new product.

I've ordered 4, coming out at £4.25 a time including postage.
I'm pretty certain that, by re-modelling the ends a little, usable old-time loco hauled bodies will emerge, more cheaply and easily than anything else I could come up with.

Interesting using card.
I made this which has a horse drawn style to it (My excuse is it was converted later to loco hauled use) out of coffee sturers, lollypop sticks etc.