Very nice indeed, especially the viaduct and trees. Like you I have lots of rolling stock and do not want it to be hidden from view, after all they are not cheap and therefore should be visible. I look forward to seeing more of this fine layout.
High towards the far post,Howard with a header,Hes done it!Steve Howard has scored for Leicester City,Bedlam here at the Walkers Stadium. the Leeds United players are flat out on the turf in utter despair. Leicester City are going to win again
Top

Well here's the track plan and my version of history. 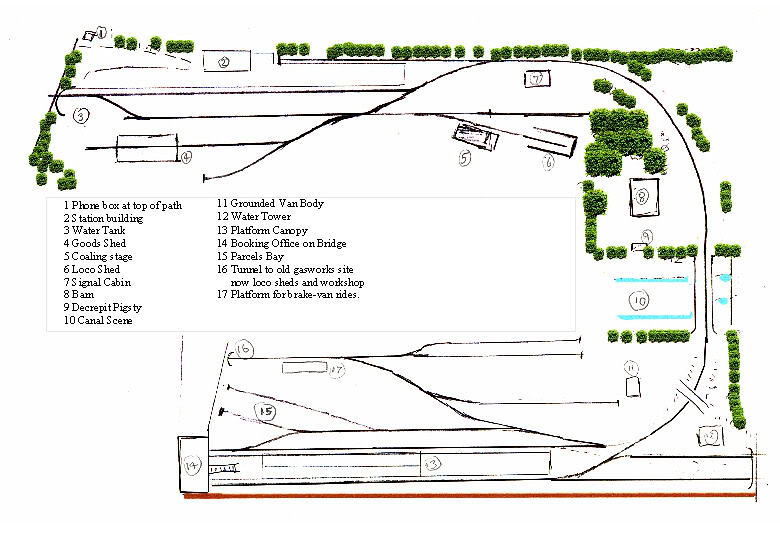 Anyone who knows the geography and the history of the lines south-west of Birmingham may conclude that we are looking at a parallel universe. The lower station served a small market town on a mainly single track secondary route built by the Midland Railway. It left the West of England line somewhere south of Birmingham and rejoined it somewhere North of Gloucester. The GWR built a branch off the Oxford, Worcester and Wolverhampton line to join up with it. The line through the junction was doubled to allow both north and southbound trains to make some sort of connection with the GWR. The upper station is the first along the branch on its eastward journey.
Beeching closed the old GWR branch and the line south of the junction. In the eighties the remaining line was electrified, and diverted north of the junction into a new platform adjoining the bus station. The junction station has been taken over by a group of enthusiasts and the layout modified to allow both platform faces direct access to the branch. Until the change to natural gas in the sixties coal was brought in for the local gasworks, and shunted through a tunnel in the corner of the goods yard. The gasworks site has been redeveloped as an industrial estate but the
area around the tunnel mouth was unwanted and has been taken over by the local authority who leased it to the enthusiast group for a loco shed and workshop. On special events visitors wanting to see the sheds and works are offered brake-van rides through the tunnel.

Sorry to disapoint manormadman. City of Truro and a 2251 can manage the branch between them. Well spotted Pedanticmongrel - The crankpin on the centre wheels are the giveaway. The Lima chassis twisted with the torque on the rear wheel despite the massive weight in the boiler.

John (Bufferstop)
Growing old, can't avoid it. Growing up, forget it!
My Layout, My Workbench Blog and My Opinions
Top

Woops! It’s been nearly three months since I said I’d post some more pictures. I blame it on this website,. I sit down at the computer with the intention of doing something, then end up checking the new posts and getting involved.

Perhaps I should go back a bit and put my modelling in context. Since I was about twelve I’ve had a layout of some kind, apart from a few years when I was looking after my young son and my terminally ill wife. Even then I managed a subscription to the Railway Modeller and keep up with what was happening. Then when I remarried as well as gaining a wife, an extra son and daughter I gained a loft.

Part boarded, insulated, wired for power and light and with an excellent foldaway ladder. There were two things wrong with it. It didn’t contain a model railway (just a train-set) and the maximum height at its centre was one inch taller than me. I managed to fix the first problem, but I was stuck with the low roof. Still it served my needs for over ten years.

Then fourteen years ago health problems forced me into early retirement and part time self employment.. I discovered that spending any length of time in the loft was a pain in the neck, so a rethink was called for. We had a spare bedroom used a few times a year by one or other of our fathers. So I constructed a set of lightweight baseboards that sat on top of book shelves and dressing table, with a board for the hidden sidings which bridged the bed.

When I say lightweight I mean light, with the exception of the drop section for a viaduct and the hidden sidings the boards were laminated from inch thick poly foam, to form an upturned box with inch thick top and two inch square walls. The outside was trimmed with very thin ply except for the ends which joined, where it was twelve mil thick.
Time and the inevitable ended the need to use the room as a bedroom and we found just two of us living in a house adapted for a family of five. We took stock and decided we didn’t want to move, so the house and garden got a makeover.
[edit] These photos of the house alterations never fitted well, so when PhotBucket went all greedy I didn't bother moving them.
Growing old, can't avoid it. Growing up, forget it!
My Layout, My Workbench Blog and My Opinions
Top

wow.....your house looks lovely.......(lol not to mention the model railway

Thanks for the update - great house with lots of room! Hope you had a re-house warming party

Looking forward to seeing more of your layout in due course as well!
“Sir, Sunday morning, although recurring at regular and well foreseen intervals, always seems to take this railway by surprise.”
William S Gilbert
__________________________

I to have problems with one of the cats,he keeps getting in and nicking the trees.What scale is your cat as raffer big for 00 gauge.Anyway very nice layout there,always nice to see someone else work.

I have a kitten which keeps chaseing the trains, in the end it gets dizzy and falls over and crushes some 00 gauge people
Top

Eastern wrote:Thanks for the update - great house with lots of room! Hope you had a re-house warming party

Looking forward to seeing more of your layout in due course as well!

We had a sort of house warming! The builders were finishing off inside mid November. The house needed to be brought up to temperature, but the underfloor heating had to be kept fairly low until the flooring had acclimatised itself. The answer was nicknamed Jumbo 'cus it looked like an engine off a 747. Sounded like one too when it started up. We set it up at the bottom of the stairs and pumped in warm air for a week. The room 'stats are all battery powered so I left them unplugged and when they had showed around 15 degrees for a couple of days I plugged them back in their sockets and watched the servos opening and closing the valves for that room. By the end of a week all the rooms were at the temperatures we'd set and Jumbo went back to the depot. As Jumbo had been blowing into the area where the layout would be, the first job was to vac out all the dust he'd kicked up.
Growing old, can't avoid it. Growing up, forget it!
My Layout, My Workbench Blog and My Opinions
Top

champion wrote:What scale is your cat.

The ginger "monster" is actually quite small, she's sixteen years old but you wouldn't know it from looking at her. Very self important, sitting on the layout was one of her attention grabbing tricks. Perching on a three inch wide first floor balcony rail is another. Chasing model trains appears to be beneath her dignity. When they start moving she looks at them, turns her back for a moment then stalks off.
Growing old, can't avoid it. Growing up, forget it!
My Layout, My Workbench Blog and My Opinions
Top

The cats not a train spotter then more of a train squatter.Damm there goes another tree.

We have a second cat who disappears whenever a camera is around, she' a couple of years younger, a bit larger and very hairy. Her main preoccupation is getting in enough shuteye every day. When the layout was in the spare bedroom her favourite place to sleep was on the platform. I still have a collection of bent and twisted station lamp posts.
Growing old, can't avoid it. Growing up, forget it!
My Layout, My Workbench Blog and My Opinions
Top

Thought you might like to see what I did with a pair of rather tatty Hornby Dublo signals.
Here they are after I worked it all out on the first. As you can see it is now a lower quadrant signal with a finial on top rather than a cap.

then attacked the top and the lamp bracket. The hole is to help locate the finial

next I cut and ground off the pivot and lamp. Drilled a new holes for the arm and lower pivots and one through the base for the wire and tube.

whoops out of sequence, glue lamp in place

fit ladder and other bits

two signals ready for planting out on the layout.

The bases will be cut into the cork base and the covered with scatter.
The ends of the wire-in-tube will come out through the side of the boards with a plastic bobble to pull and push them. One day in the future I intend to connect them to a lever frame.
Growing old, can't avoid it. Growing up, forget it!
My Layout, My Workbench Blog and My Opinions
Top

again, nice work on the signals

Users browsing this forum: No registered users and 21 guests