Control panels. Show us yours.

Control panels. Show us yours.

I'm seeking some inspiration for my control panel design and wondered if members would share pictures of your own creations be it bought or home made.

Although my layout control will be with DCC, my control panel for point switching and the SEEP PM1 point motors themselves will be run using DC.
(There will also be some surface mounted points that will run on DC)
Thanks
End2end
"St Blazey's" - The progress and predicaments.
Welcome‎
Planning
Building
St. Blazey's Works & Depot thread
Top

My panel is pretty basic as I only have four sets of points to operate. But the principle can be used for a larger panel. Switches are sprung on-off-on. I don't have any light on the panel as I am fitting light signals which will show which way the points are set. The panel is removable and attaches to the board using a couple of 3mm bolts with wing nuts. The wires are plugged into the board using a plug and socket. The points are powered using a cdu fitted under the board.
I can post more pictures and details if required.
Dave 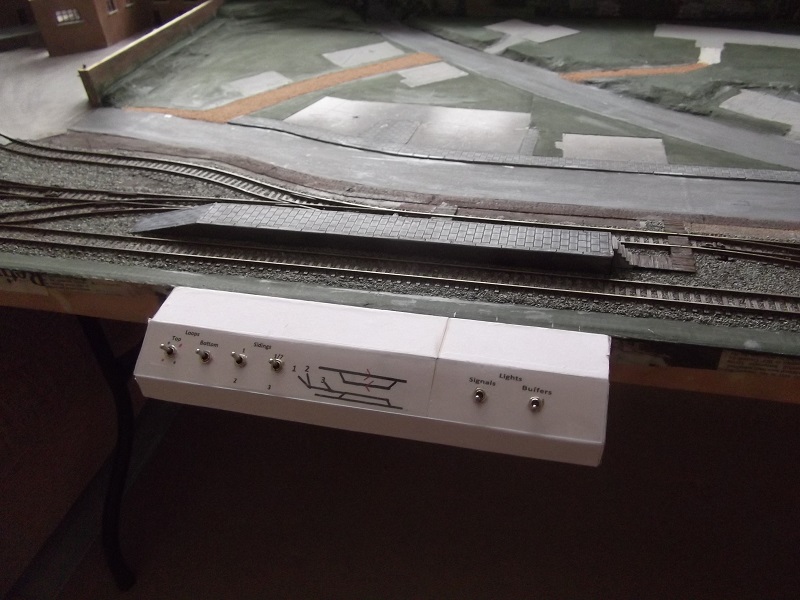 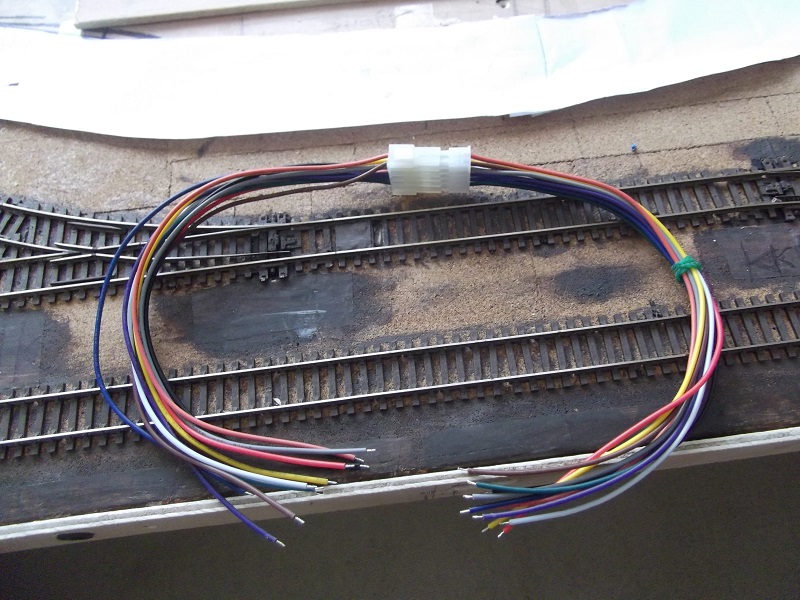 This is mine. Crudely labelled but I know what it does
I also have 6 Hornby point switches alongside it.

The controllers are Gaugemaster hand helds, on a long enough lead for me to reach the ends of the layout. I've replaced the Gaugemaster leads with some eight way cable and an 8 pin DIN plug to fit in the meters on the no2 cab. The track diagram is colour coded. I was able to get away with just three colours there being red yellow and blue zones at each end, and the switches in the centre are colour coded to match. The isolation gaps between the zones are shown as gaps in the line on the diagram as are gaps for dead ends and sections within the engine sheds. The switches are two way centre off types so that either controller can operate any zone on the layout. In addition the right hand blue zone goes through a change over switch so that I can swap the yard to a local controller. The two meters are for track voltage and current and can be switched in or out of circuit on the right hand (No2) controller, they only work with one of the controllers, but the other two have the same plug so that any can be used in any position, the modified controller has additional leads as the voltmeter has to go across the feed to the reversing switch and the ammeter is in line with the positive feed to the same switch. If a loco isn't running too well watching the meters as it runs can highlight things like binding, the voltage drops current goes up or loss of contact voltage rises and current drops.
The panel is hinged along the bottom edge and can be hinged down by removing the two screws at the top corners (whilst remembering to park the controllers elsewhere before tilting it.)

What can't be seen too clearly is in the back corner behind much of the wiring, is a bundle of leads from the compartment below, where a six way power strip holds a row of wall wart transformers and adaptors which are all controlled by a single switch on the outside. It's covered by a solid panel screwed in place so that accessing any mains connections requires deliberate action.
The one thing you won't find in there are signal and point switches, they are all mechanically operated, and as they are just in front of the things they control, press button and switches for dead ends etc are all placed in front of the sections concerned. They all have colour coded tops so that where they are close together you can see which zone they are in. It's only when I want to do something complicated, like pulling out the carriages to release a trapped loco, that I need to isolate a zone, most other moves are controlled by the point settings and the dead end switches.
Growing old, can't avoid it. Growing up, forget it!
My Layout, My Workbench Blog and My Opinions
Top

Here's mine, traditional switches on diagram for points and sections with lines colored to correspond with controllers, very simple compared with some in the past as I decided to go back to basics with this layout (human controlled).

It's fixed to the layout with hinges allowing different operating positions from horizontal where it's rather intrusive to vertical where you have to work by feel if standing or just right if you are sitting with the layout at eye level. There are no connectors, the wiring is permanent (and some might say a birdsnest).

The squares of veroboard are track circuits for the signalling, finned black things are controllers, digi-switch selects stacker level.
Does the pain of N gauge steam ever end!
Top

Ahh yes switches on the track plan. That is my thinking, with LEDs to show point position if they will fit.
Thanks so far members. Keep them coming.