I want to add some interior lighting to a few houses on my layout, ideally a soft yellow light rather than a bright white light.

There are LOTS to choose from on EBay and I don't want to pick the wrong sort. Anyone have any recommendations or advice?

Warm white or yellow depending on era/taste. Use resistors (always needed anyway) to dim to the brightness you want. Recommended at least 1k. You could end up with 5k or more.
Pete.
Top

A set of christmas tree lights could be a good option if you need more than a few lights. Have a look in January!
Once an engine attached to a train, was afraid of a few drops of rain...
Top

pete12345 wrote:A set of christmas tree lights could be a good option if you need more than a few lights. Have a look in January!

At 100 LED's for (roughtly) £1 you can get them off ebay. Might take a while to come from the far East but by far the cheapest option.
I've bought 100's in various guises / coulours / sizes.
Your probably better getting 3mm WARM WHITE LED's to start with for internally lighting buildings.
ALWAYS add a 1KOHm resisitor to EACH LED. These are also obtainable via ebay from China for a pittance for a 100(0).

One suggestion would be to buy a CR2032 coin cell battery to test each LED before soldering onto / into a circuit. Just slip it between the LED's legs. If the LED doesn't light turn the coin cell battery round the other way.

If you look through my layout thread you can see where I've used various LED's in my buildings. Most of them are lit. Some with lampshades too.

Bare LEDs always need a resistor in series. As already suggested, 1k ohm is a good starting value, but in theory the minimum/optimum value depends of the LED's colour (different colours have different electrical characteristics), its current-carrying capability (usually related to brightness), and the supply voltage. I use this simple on-line calculator http://led.linear1.org/led.wiz to determine the optimum resistor value, and then increase the resistance if I want it dimmer. I steer clear of LEDs where the vendor can't give me their forward voltage and forward current, though 20mA is usually a safe value for the latter.
Top

You should just use whatever colour you feel like. But this would depend on what era you are modelling.
Top

My rule of thumb for LEDs is White to represent florescent lighting in modern'ish shops.
Warm White LEDs for representing filament lamps in houses, street and platform lights etc from the 1950's on.
Yellow or orange for gas light lit interiors and ideally one of each which I feel gives a better colour rendering mix!

The main problem with many cheaper White ex Christmas tree strings of LEDs is they are frequently not white but are extremely blue tinted when viewed illuminated and inside buildings, providing a very strange lighting effect, so be aware white isn't just white!

As previously advised, add a series resistor and additionally if using a mains to low voltage power supply then use a regulated DC power source which will prolong the LEDs life.
[

abenn wrote:1k ohm is a good starting value, but in theory the minimum/optimum value depends of the LED's colour

My minimum/optimum value is one that doesn't blow the LED's. So "in theory" a 1KOhm is a good safety margin for whichever LED's you end up using.

You could calculate the EXACT resisitor for each LED, but I use 100's so there's no point in me buying a bunch of differrent resistors when 1KOhm will light all of them and keep them safe from blowing.

Just to point out, I'm talking about LAYOUT lighting here.
Where the resistor calculation would be useful is pre-made lit signals. No one in thier right mind would want to take them apart and change the LED.

For building interior lights I use "warm white" flexible LED ribbon
Each roll has 300 LEDs which you cut into short sections of 3 LEDs each. Each strip of three LEDs has a series resistor. The strip is self-adhesive so you can just stick it to the ceiling of your building. You still have to solder wires to it.
It gives a nice effect because the light shines down instead of outwards casting strips of light on the ground. 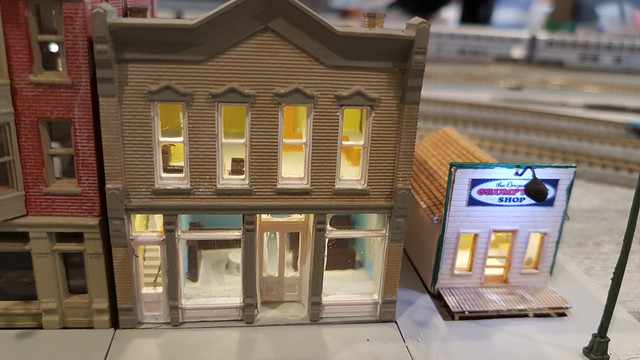 I use NCE "illuminator" decoders to power and control the lights from DCC. They allow you to adjust the brightness as well.
Regards
Rob
Top

I have powered my lighting from the speed knob output from an old DC controller, which allows me to turn them on/off or set at any level of brightness, up to the max given by the controlling resistors in circuit with the LEDs.
RAF Halton Brat - 96th Entry
http://www.halton96th.org.uk/robs_rails.html
β-tester
Top
Post Reply
12 posts • Page 1 of 1