Have any questions or tips and advice on how to build those bits that don't come ready made.
Post Reply
23 posts

Thanks Ex-Pat, yes I see what you mean about it being more American. This wasn't just a one off though, this was a common design across a range of the LNWR's more luxurious/special carriages, from their Royal train, through to their prestige "2pm Corridor" service from Edinburgh to London in conjunction with the Caledonian, right down to this regular composite dining car. As ever, a combination of a tricky livery and some complex build features drew me to wanting to model it, just to see if I could!

Thanks Ex-Pat, yes I see what you mean about it being more American.

Weren't they a home built response to the design of some imported Pullmans? The inset vestibule doors and the huge clerestory are very Pullmanesque. Magnificent coaches must have given a marvellous ride!
Growing old, can't avoid it. Growing up, forget it!
My Layout, My Workbench Blog and My Opinions
Top

Thanks Ex-Pat, yes I see what you mean about it being more American.

Weren't they a home built response to the design of some imported Pullmans? The inset vestibule doors and the huge clerestory are very Pullmanesque. Magnificent coaches must have given a marvellous ride!

Yes I think you're right Bufferstop, and the 6 wheel bogies would certainly have given a very good ride. Should be interesting when I get round to modelling them! I haven't found a kit for them so it'll be a bit of a challenge.

More flitting around, a couple of MR wagons rolled off the bench as I finally got round to knocking up some transfers for them: 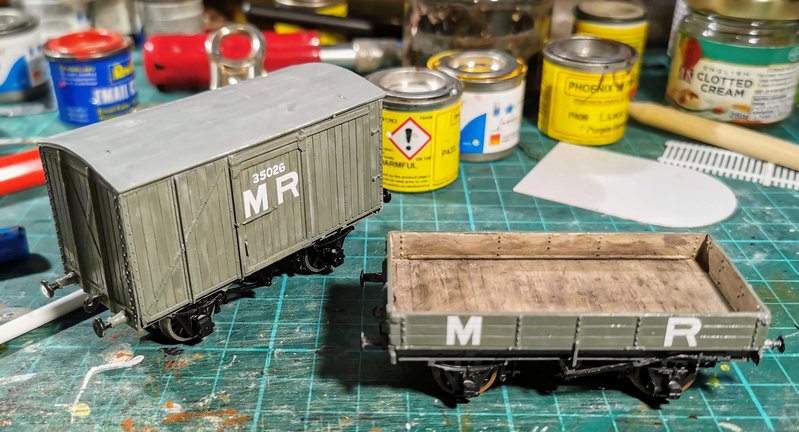 The latest project though has bene inspired by a few pictures I've seen recently of people improving the old Hornby railroad teaks, originally resplendent in beige plastic. Now I have no use for LNER teaks, beige or otherwise, but Dad does. I successfully spirited them away from his shed for a makeover as a Christmas present. So far he hasn't noticed! Anyway, here's the starting point, from a stock photo, for those few people who didn't have any as a kid: 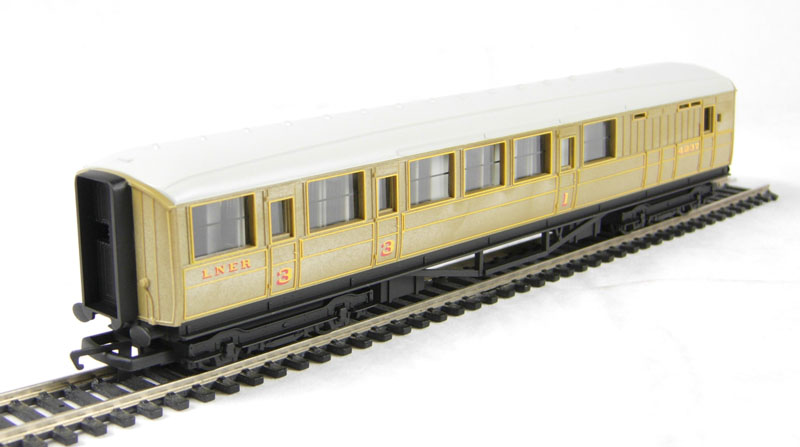 Starting with the body shells, all of the lining (some of which was incorrectly placed, or misprinted, and some not present at all) was scraped off with a knife along with lettering with a glass fibre pen. The end corridor doors were also painted in a similar beige paint, as these ought to be the same teak colour as the body, not black. Rather than overpainting the beige plastic, I kept that as an undercoat. "Raw Sienna" was brushed on with a stiff brush in the grain direction, followed by a teak stain once dry.

While I was waiting for that to harden (takes a couple of days) the sole bars were painted brown over the incorrect black plastic, along with the electrical connections on the end of the coaches, the cables picked out in black. The interior was painted a tan colour with red seats for 3rd class and blue for 1st, and the top edges of the ends were painted off-white to match the roof.

Then it was out with the bowpen to reinstate the lining. The nib ran along the lower beading quite nicely all by itself, and it was dead easy to tidy up any mistakes with a brush dampened with white spirit, possibly the easiest lining out I've ever done! Likewise with the end beading. The verticals on the upper body beading were put on with a ruler (the lining shouldn't be on the frame, nothing around the doors and nothing horizontal above the waistline). Finally all set off with HMRS gold transfers.

Here's the result with 3 done so far, another 3 are still in processing:

I know they're not accurate, but hopefully an improvement worthy enough of wrapping up and putting under the tree.

A question for anyone more knowledgeable than me, are there any other easy, noticeable improvements that could be made that don't involve cutting plastic? What about destination boards on the carriage roof or sides? I tried looking for some examples but didn't get much, any suggestions?

As far as destination boards are concerned I have recently purchased, but not yet applied, these:

They certainly have other titled trains in their repertoire, although I find their website frustrating at times.

They might be far too modern for your purposes but you might be able to cannibalise perhaps.
My layout thread: http://www.newrailwaymodellers.co.uk/Fo ... 22&t=50019
viewtopic.php?f=49&t=51636
Top

Thanks Ex-Pat. I'm fairly happy on how to produce the roof boards, plasticard and home-printed transfer paper is ideal of that, just not sure of the design, colours, fonts, size etc. for LNER period. As you say, those are a bit modern, however looking elsewhere on their site they have lots of LNER era ones coloured cream with black lettering for named expresses. I've also seen some blue with yellow lettering for Flying Scotsman sets, and some smaller white on black. I'm now totally lost!

Edit - the SVR are normally pretty spot on with these things, for simple destinations, they've got one cream and one white, both with black lettering. Hmm, think I'll go with cream then.

I haven't explored further, but you might glean further info here:

The teak coaches look so much better and now I need to give mine the same treatment. It's probably worth dirtying up the roof as well as these wouldn't have stayed white for long.

If you're running these as fixed sets, the Keen systems close coupling mechanisms are a straightforward fit and close up the gap nicely. They're also a rigid drawbar which means the whole train moves and stops as a single unit- no more picking up the coaches one by one like a loose-coupled goods train.
Once an engine attached to a train, was afraid of a few drops of rain...
Top
Post Reply
23 posts