Thank you TimberSurf - do not, however, give up....

Did I say earlier that simple though these kits appear to be, they can never be taken for granted? The last few days have been beset with self-inflicted problems: a classic case of more haste, less speed. I managed to smear epoxy resin over one side and both ends for starters. Don't ask me how, I just did. Fortunately it was the varnished side that was messed up and several very quick and light passes with a tissue soaked in IPA solved the problem. The ends were treated similarly and survived, although they will be resprayed.

Attaching the second side and inserting the wheel sets led me to believe that there would be no further problems. The body is square and sound but a trial run on track, once the adhesive had dried, showed an appalling wobble, something I could not live with. This had not surfaced at all during the earlier dry run and was a puzzle until it was traced to one of the wheel's plastic insulating bushes. The wheels are at least 50 years old and at some time, during their attachment to the coach, a bush had cracked and the wheel had shifted out of true, irreparably so.

The frames are rigid as you can see and the body parts are glued solidly together. The only way to remove the wheel set was to cut through the axle. This done, a new set was cut into two [and the centre piece further shortened] and then long tubing from an unused pop rivet was cut down, reamed out and slipped over the cut axles with both wheels then pushed in. In that way, the wheel set could be inserted into the axle boxes and a back-to-back gauge then used to pull the wheels apart to the correct setting. Liquid superglue was then applied to the tubing and capillary action drew it in, securing both wheels firmly in place. The coach now runs without a wobble. This palaver took an entire day to sort, the main problem being sourcing a metal tube of the correct dimensions to form a whole axle. The photo is probably worth a thousand words however.... 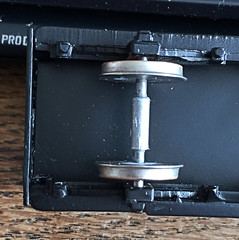 Pop rivets are available in a number of sizes and provide a valuable source of cheap metal tubing for jobs similar to this.

Finally, a photo with the roof dry-fitted to check for squareness, etc. I have repainted the roof and it awaits re-application of grey paint below the rainstrips. Buffers and couplings have also to be fitted and a little touching-up applied here and there. But coach one is now nearly complete.

The glazing of the roof lights is quite effective I think, certainly worth the effort.

Comment has been made elsewhere about avoiding Keyser white-metal kits. Certainly, their loco chassis can be trying, and their motors are probably best avoided completely, but for interesting prototypes like this they really are worth persevering with. If you've patience and the right tools, an acceptable outcome is nearly always possible.

I won't give up the competition, it's just I am resolved that I won't get a place!

(Again)
I Know how to spray paint, done lots of can rattlers and compressed air and airless. I only recently bought an airbrush kit and had mixed results, mostly blocking up, which I have been advised is because I was using 30 year old Humbrol paint! However, ignoring blockages, the results were as expected, it covers and dries like lightening!
I have bought a new expensive airbrush that has not had my ancient humbrols near it. I bought model air vallejo paints and have been using them on my comp entry. I find the result astonishing. They do not cover. They take forever to dry!
What paint do you use, enamel or acrylic?

Well, I also have an airbrush but I just can’t be bothered with the faff involved. On large ateas I use rattle cans (generally), smaller areas and details I brush paint. The body and roof here is sprayed with Halfords Rover Damask Red and Halfords Matt Black.

Amongst a number of modellers there is a snobbery about using auto paints in an aerosol. It usn’t viewed as ‘real’ painting. I have nothing against air brushing but I get really good results with aerosols most of the time without the hassle of mixing (and sometimes running out of) the paint and cleaning up the brush after. Each to his own though. Halfords paint is acrylic as far as I am aware.

The first coach is more-or-less complete now, the roof has been re-detailed and both sides given a further light coat of ‘Klear’ to restore some of the richness of colour that the varnish removed. Buffers have been attached and it just awaits vacuum pipes and couplings. The sides of the second coach[Brake 3rd] have been painted and the build will proceed in due course. 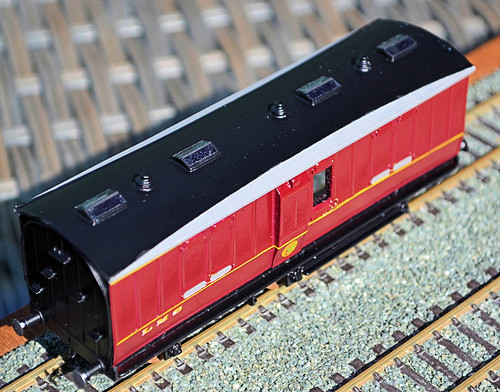 Everything looks better in the sun! But excuse the dust once again.,...

I do enjoy seeing what can be done with a white metal kit. This one has turned out to be something very special. I really like the guard leaning out the window - something you don't often see modelled.
Steve
Top

Beautiful paint finish - but will you have the heart to weather that fine work?

Thanks both. Weather it? Heavens no!

I spent an hour ot two last night lining the sides of the second coach with my new bow pen. The results were not really satisfactory however as the raised beading was insufficiently sharp to prevent even neat paint from being drawn away through capillary action. A bit annoying but no harm done. The paint was removed and I’ll use Pressfix lining in its place today. I think that an experienced hand at lining could probably have mastered it but I just couldn’t stop it from flowing around the door handles and onto the panelling. I will try again when I build the third coach, the All-Third, as the detail on that is far more distinct.

In the meantime, dummy couplings and vacuum pipes have been fitted and to finish the job I’m just waiting for some Bachmann couplings to arrive in the post.

Sorry to hear of your problems with using the bow pen (what pen do you have?). How thick was the paint that you used? I often find that the paint as it comes from the tin isn't thick enough to use (occasionally, it is too thick!). As a general rule of thumb if it will remain on the end of a cocktail stick by turning the stick slowly, then it is about right. If it drips off, it is too thin and you'll need to leave the lid of the paint for a day or two (keep checking the tin and don't let it skin!). If if refuses to drip at all then it is too thick and you can thin it a drop at a time until you've got the consistency you want.

Once you've found the consistency you want, only use that tin of paint for use with the bow pen.

Sorry if this is teaching your grandmother to suck eggs.
Steve
Top

No problem at all with those comments Steve.

I don't know what make the bow pen is. I bought it online as one which was clearly a draughtsman's pen and one which had been professionally reground. It will draw an unbelievably fine line [down to .08mm] on flat plastic card or coach sides but on old and not terribly precise white-metal mouldings it suffers like any cheaper pen would.

The beading on the waist panels does not have a very square edge and, being quite rounded in places, allows paint to slip off if you are not very careful. The moulded door handles and grab irons also touch and even overlay the beading in places, capillary action then tends to draw paint around them, even though the paint is quite thick. I know that practice in using the pen will improve matters but on this particular coach, having to constantly change pen pressure and angle to ensure a consistent line in terms of both thickness and colour density means that I'll go back to using lining transfers.

I'm not at all worried about that, it would just have been more satisfying to have drawn the line in!

Final photos of the completed stage one build, the Passenger Luggage Brake: 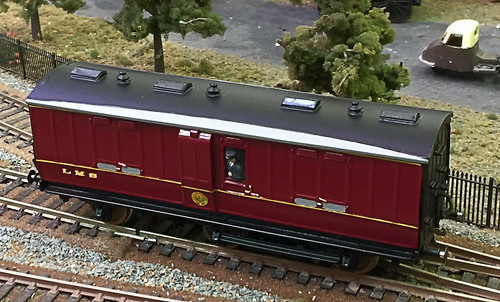 Wow. That is amazing!
Top

That is one stunning looking coach!
Well done with it, its very pretty.

Many thanks all. Appreciated.