Have any questions or tips and advice on how to build those bits that don't come ready made.
Post Reply
425 posts

Wow! Those are looking lovely Matt. For lining, I would try and go with the bow pen first but I wouldn't use gold. In Ian Rathbone's book he is quite happy to use colours other than the official ones stated to get that finescale look to the finished model. I was lucky enough to meet him at Warley last year and we had a very informative chat about how he goes about things. I got to see several of his models in the flesh and can honestly say, I couldn't tell that some of the lining colours were wrong. The fact that he typically uses a light grey instead of white on locomotives was staggering - it just look so right.
Steve
Top

Hi Steve, thank you, yes I have a dvd of I think it's Tony Wright's right track series where he's basically building and painting and has a bit with Ian demonstrating what he does, he has a lot more experience than I and I have only used it a couple of times the bow pen... I know what you mean by using different colours, something that's crossed my mind, as I have had problems with gold transfers from Fox that seem to of gone green over time... so have been looking at options to get round it... not had an issue with HMRS yet and I have a set of gold lining I haven't used... so yes when I get over this period of ill health I will have a go at it... sadly none of these we known modellers get this far south, so don't have the chance to see or speak to them.

But the DVD will have to do at the moment.
- Youtube/bluebellModelrailway
- NEW Website: http://bluebell-model-railway.my-free.website/
- www.shapeways.com/shops/Bluebellmodelrailwayshop
Top

Another odd - never waser locomotive recently complete, using an old schools chassis I had lying around, using photos of the 2 versions they made using ply sadly the streamline or air smoothed schools never made it...
2 versions as mention were done the first was quite basic the second was a bit more refined, its a mix of the 2. 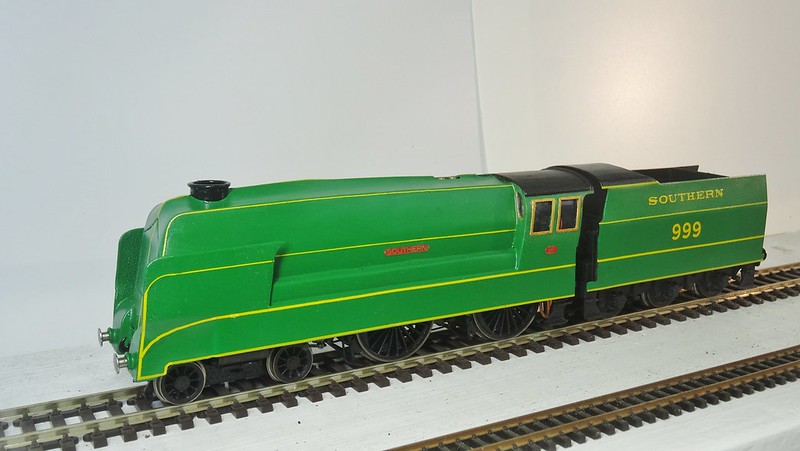 Matt,
as usual a great job. No reflection on your work, however, the prototype design looks like one of the tinplate toys from the 1930's.
Top

mattmay05 wrote:Another odd - never waser locomotive recently complete, using an old schools chassis I had lying around, using photos of the 2 versions they made using ply sadly the streamline or air smoothed schools never made it...
2 versions as mention were done the first was quite basic the second was a bit more refined, its a mix of the 2.

Great job Matt and what an interesting 'could have been'. It reminds me of the, alleged, brief consideration that LNER gave to streamlining the C1s - doubtful in the potential benefits considering the size and age of the design and something that I don't think ever progressed beyond a basic line drawing (if that).
Steve
Top

GWR_Fan, yes I know what your getting at, its very blocky and a poor attempt at streamlining or should that be air smoothed either way its odd and slightly interesting, it certainly goes well... and was tested on some quite steep inclines, and it did very well, must of been the extra weight from all the brass?

Asto, Thanks yes I have always had an interest in the odd, never wasers as me an a club member call them, from that rather large Bulleid 4-8-2 to this schools, they are interesting, and gets peoples attention, makes me chuckle when I do show them off at exhibitions...

I have one in current CAD which makes the Q1 look well... Nice!
- Youtube/bluebellModelrailway
- NEW Website: http://bluebell-model-railway.my-free.website/
- www.shapeways.com/shops/Bluebellmodelrailwayshop
Top

Having built this model on this forum and for a competition some time ago, I thought I would share that it wasn't just built for the competition but also occasionally runs... I had drawn up a number of improvements when the time came...
Firstly early 2018, the chassis was replaced, due to damage, I took this time to improve some areas, like the sprung axles. The chassis was made from SLS 3D printed Graphite nylon, the sprung axles were made bigger, with resin inserts, meaning a smoother surface to run on.
The special thing with this chassis was it is hollow, meaning I could add more weight in the chassis with liquid gravity so gained 50 grams there. 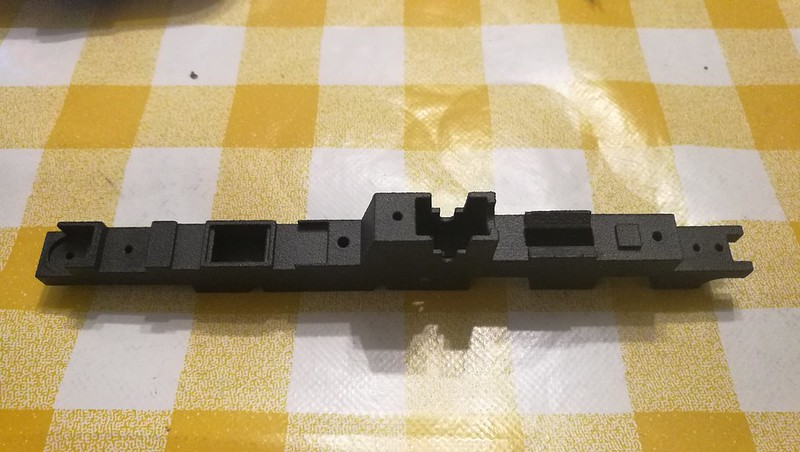 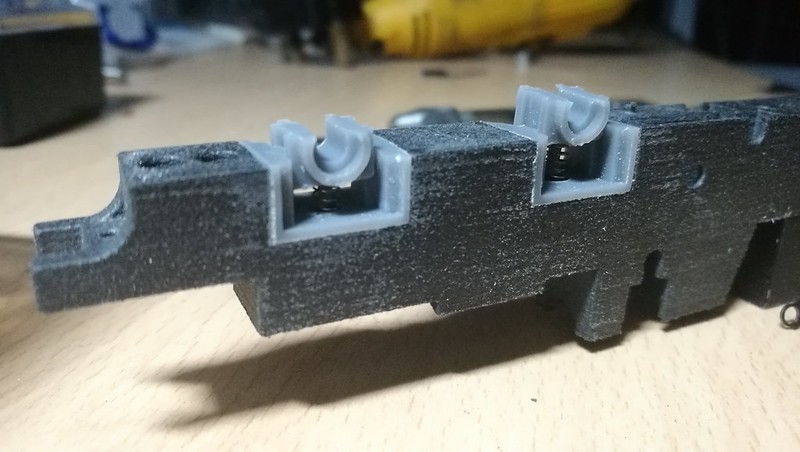 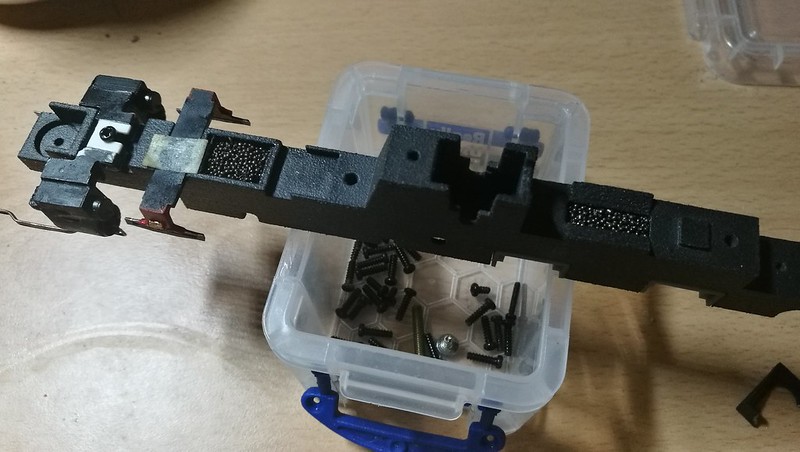 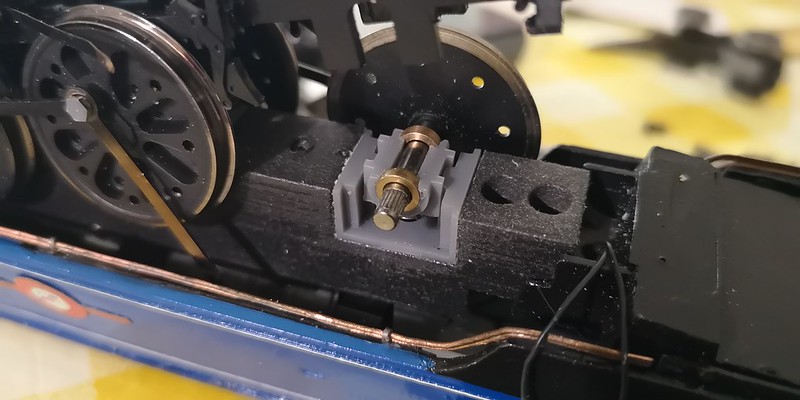 In November I returned home to where my models are kept, to find my big bullied damaged, obvious dropped, by family when my old room was being moved around. The front end was completely broken, with bits missing. 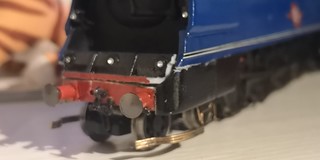 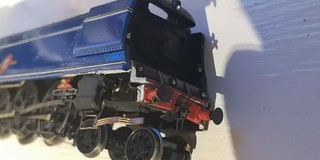 So a front end rebuild required, spare casting purchased from RT models, a white metal front end, plus brass steps, I had some spare Markits buffers, so could use those.
A week later it was coming together, with this added new front the weight on this model was now 458 grams... so it is now a monster... 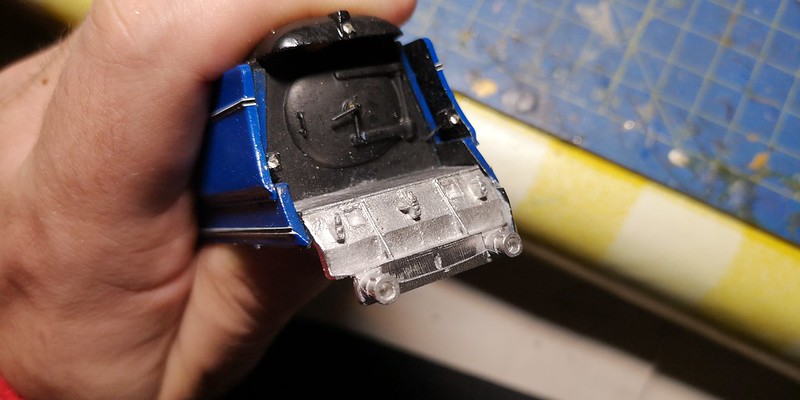 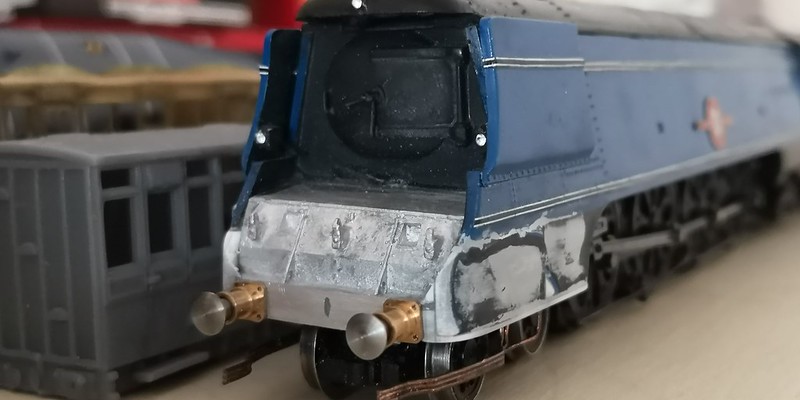 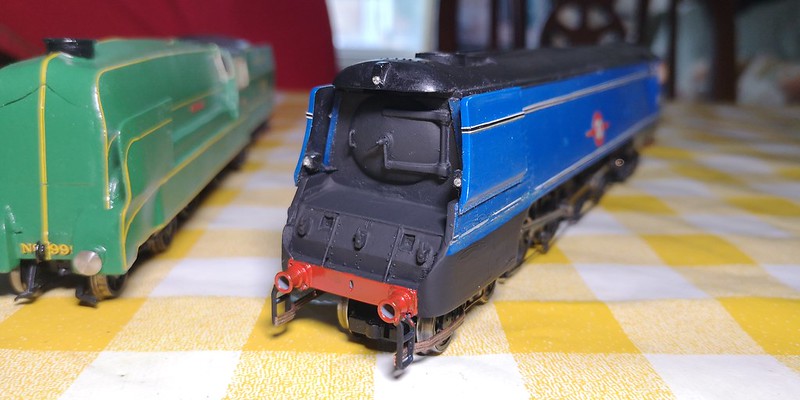 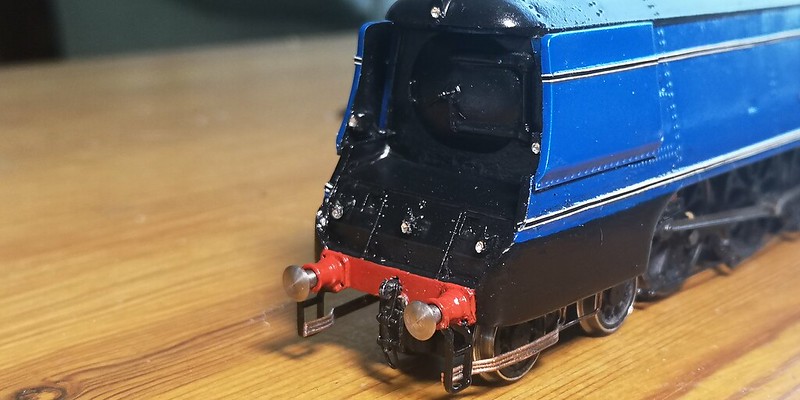 Haven't been on for a while, as to be fair I keep forgetting about this topic, and forum especially when I don't receive notifications ect...

So 5 months ago, the carriages seen on the last page were completed.
LBSCR Directors saloon, lined out in gold taking 15 hours, with furniture fitted, and glazed, looks the part, Bluebell volunteers seemed pleased when I took it down for their branchline event.... so that was nice.
The LNWR Observation car, was completed a lot of time adding the seats, think I might change the design on that... was time consuming and fiddly! Lining took 10 hours with a bow pen... was my first go, a little rough but not too bad. Also gaining a certificate from the LNWR Society of Highly commended which is also very nice, might pop up at an exhibition or 2 who knows. 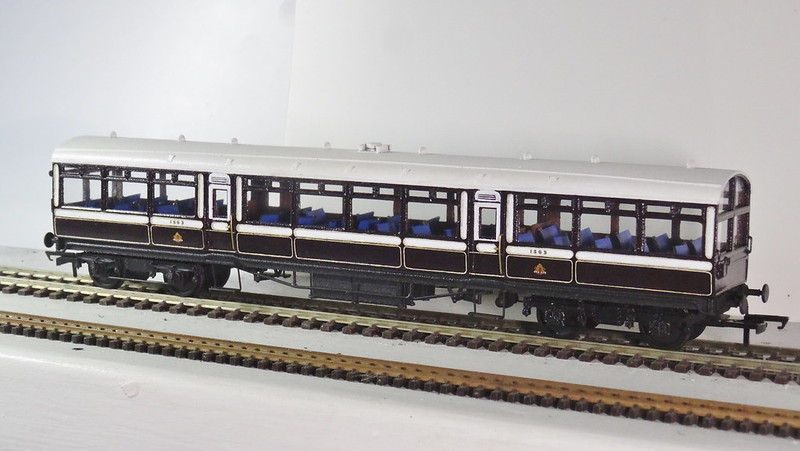 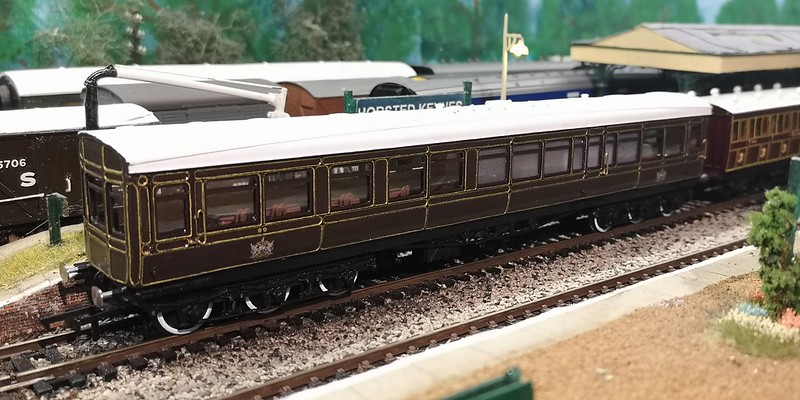 Staying on carriages, I purchased a 60ft SR green brake 3rd Lav Birdcage 3 months ago, with the idea of converting it to a 50ft 1" birdcage, not an easy task, plus a fair bit of compromise due to its slightly different mouldings between the windows.... having right angle corners and not rounded like the 60fter and an extra 1" due to the compartments of the former 2nd class. Work required sectioning the carriage removing 1 compartment and half the luggage area. This went reasonably well, the complex part was the chassis a lot of moving bits around to get it all to fit.
It may not be 100% correct but with no kits for this birdcage that represents 3363, it was the only way. 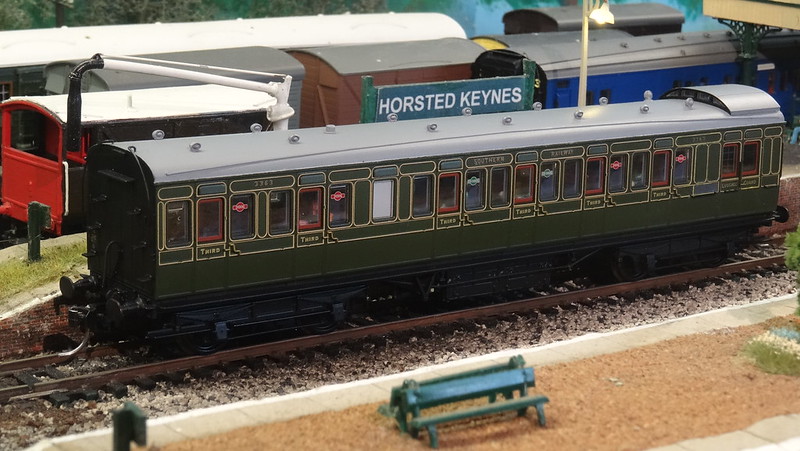 Many more carriages on the workbench to add to the vintage bogie set of SECR, LBSC, and SECR carriages.

On the loco front, 75027 by Bachmann came to the island for a bit of a model overhaul, always liked the model runs well.... however its factory weathered and looks awful. Task remove the weathering carefully without damaging too much.
This was done over the weekend, with a cotton bud, and some soft remover, I only lost a few bits, but the lining stayed intact, losing the numbers, one crest and the blue route dots as it worked around the GWR. Then lightly coating the model in the BR green, add cleaning off any over painting.
Fits in now, with its surrounds and looks quite nice.

Another sort of small project... Hornby's new terrier, nice, but none in the condition that I would like... so taking an A1 Stepney, to convert it in to A1X Preserved condition... could it be done.... 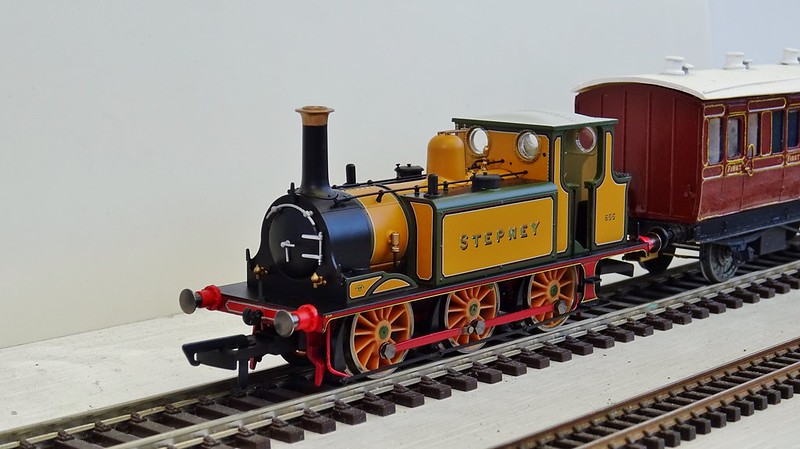 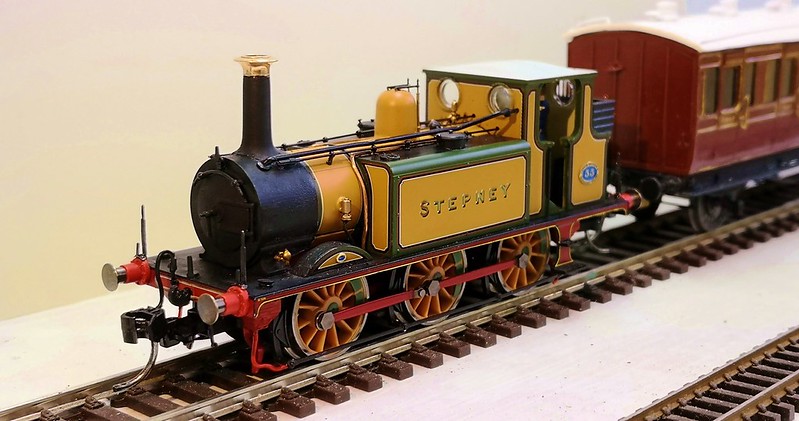 Thanks, yes there is a lot of work, not much of it can be seen, took a lot of research and there were some large changes.
- Youtube/bluebellModelrailway
- NEW Website: http://bluebell-model-railway.my-free.website/
- www.shapeways.com/shops/Bluebellmodelrailwayshop
Top

Another almost finished project which started 2 years ago with research and measuring as well as finding sources for transfers ect... The project was to create Isle of Wight Oldbury carriages, one of which featured on the program, great railway restorations.

My aim was to 3D print a set of 4, one of each type, Composite, All First, All Second and a Brake Second.

There was a lot of research due to suspecting the book I was using for research wasn't quite right, thanks to the IWSR Carriage and Wagon group they cleared up a number of areas, and assisted greatly with any of my enquiries.

Another project completed, thanks to Covid 19, I can finally get some of my own work done, GN Directors saloon V2, is now complete, this is almost fully 3d printed, apart from the bogies and coupling cam.
3D printed interior like furniture ect... 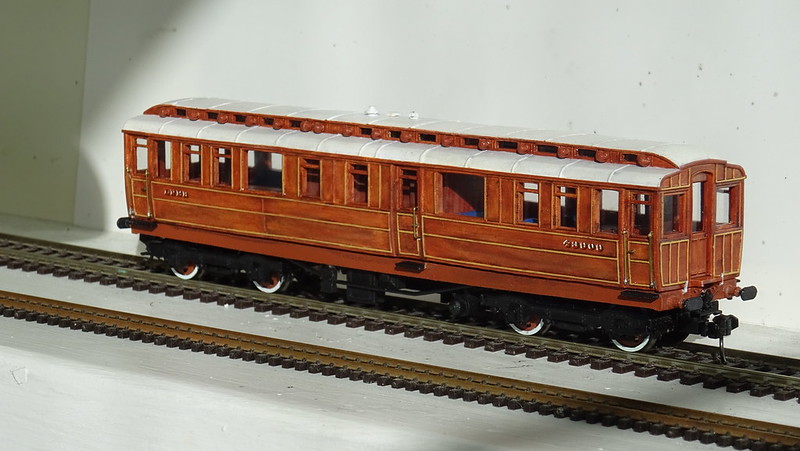 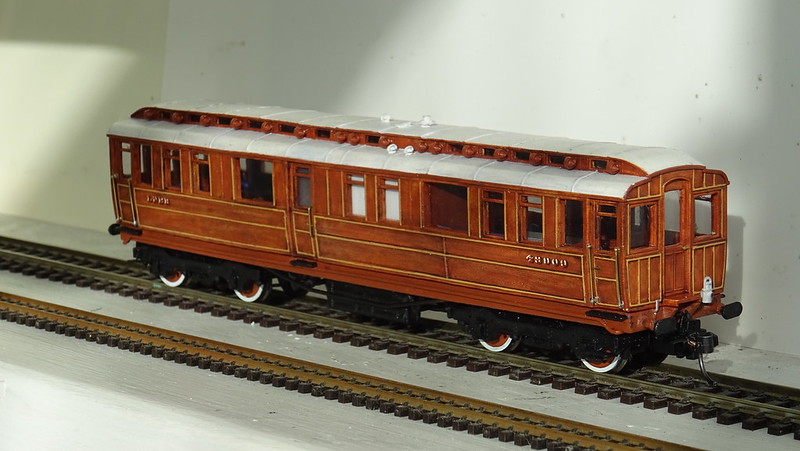 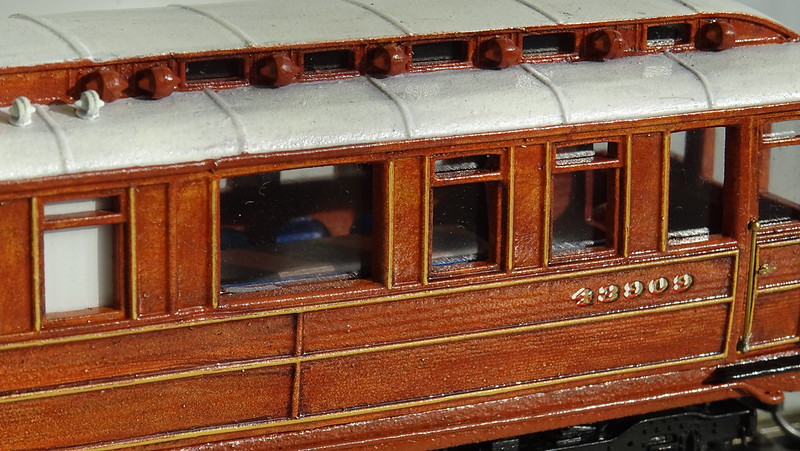 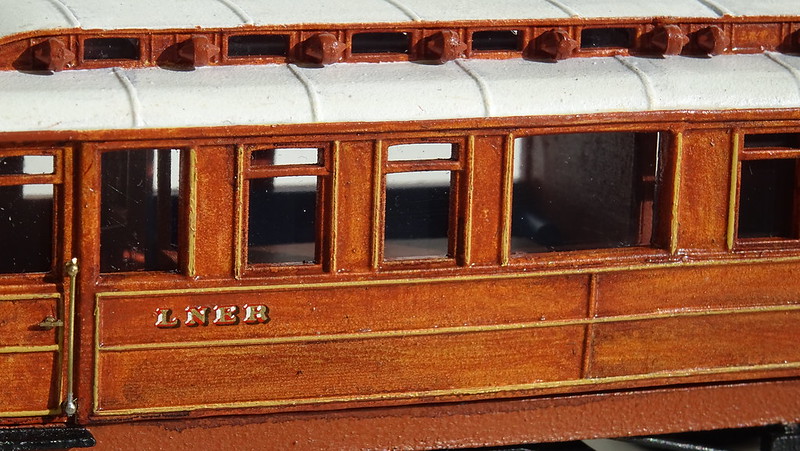 That is exquisite Matt. I think the barely visible print lines really enhance the wood effect. Likewise the oldburys. I presume the lining is with a bowpen? Extremely neat anyhow.

The might have been air smoothed Schools looks great, it is an example of the generation of steam locos we never got to see. The American streamlined 4-4-0s of the thirties and fourties were great looking locos that set a style statement that the first generation diesels had to live up to.
Growing old, can't avoid it. Growing up, forget it!
My Layout, My Workbench Blog and My Opinions
Top
Post Reply
425 posts