Happy NOW to you, and the rest of the world, Ken.

I want to say something about:
I don't belong to any religion, tradition, idea or stream, let's stay ideology, philosophy or whatever. Not because I imagine 'I'm better' or 'know better' bur simply because after seeing during my whole life what the human mind has been doing I don't believe at all in any of it's theories, inventions or any other thing.
I don't celebrate even my birthday but I do celebrate only two things: the first is waking up every morning and the other reaching my sleep every night.
Both are simply gratitude. To who? I would lie if I would say I know. But I realize you and all others are part of it so THANK YOU FOR BEING WHO YOU ARE.

Here a couple of photos that may help a bit to realize what is the situation at the front of the bridge. 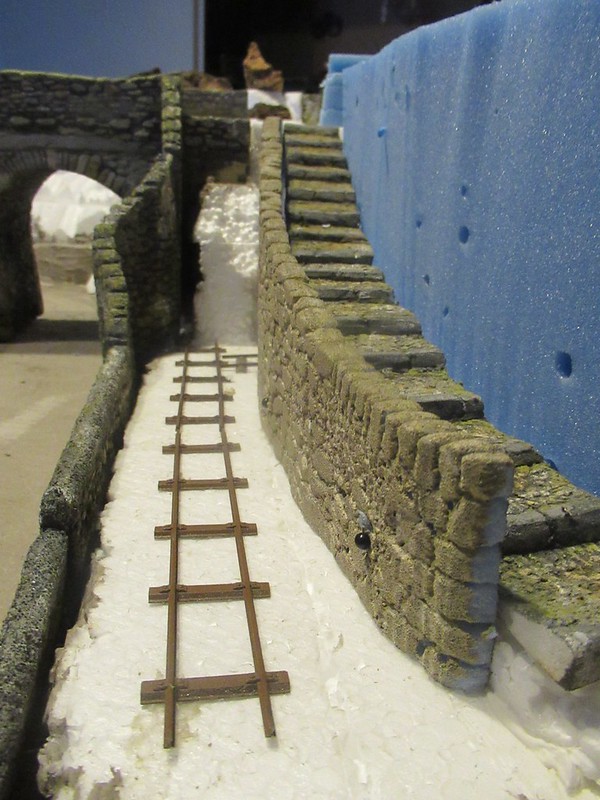 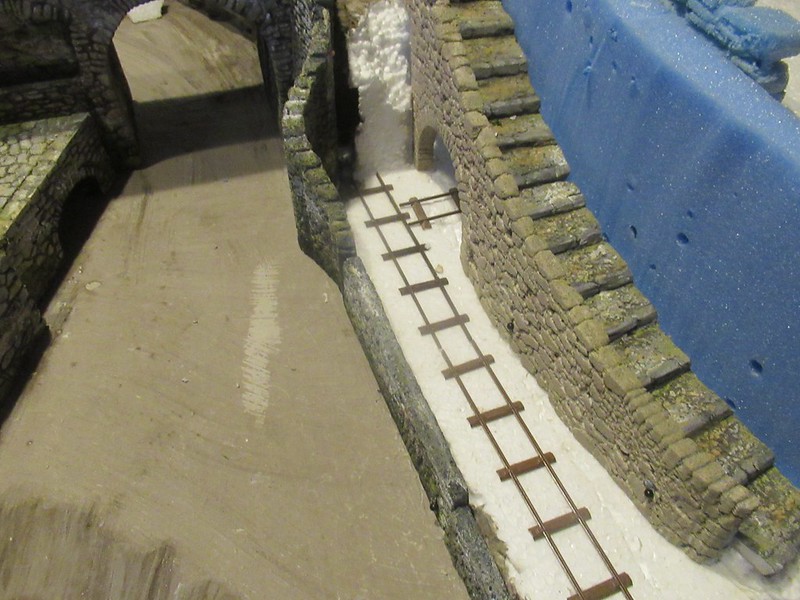 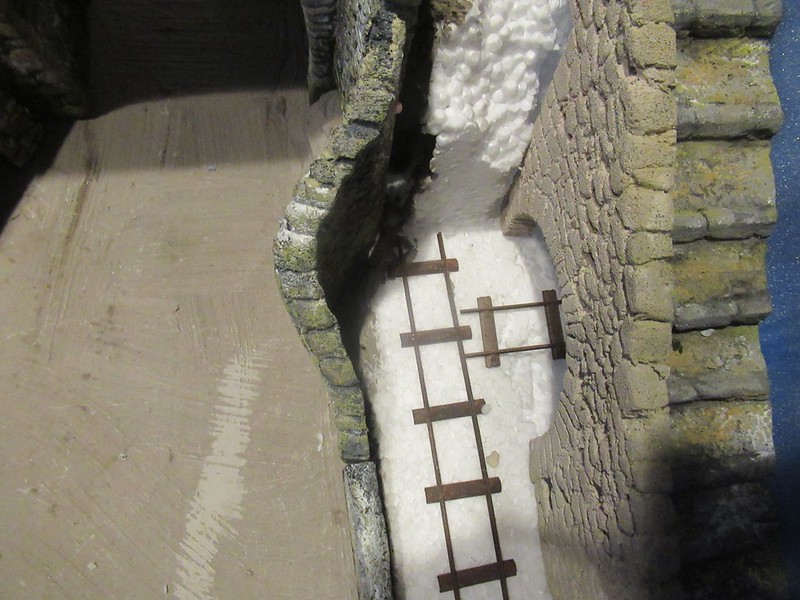 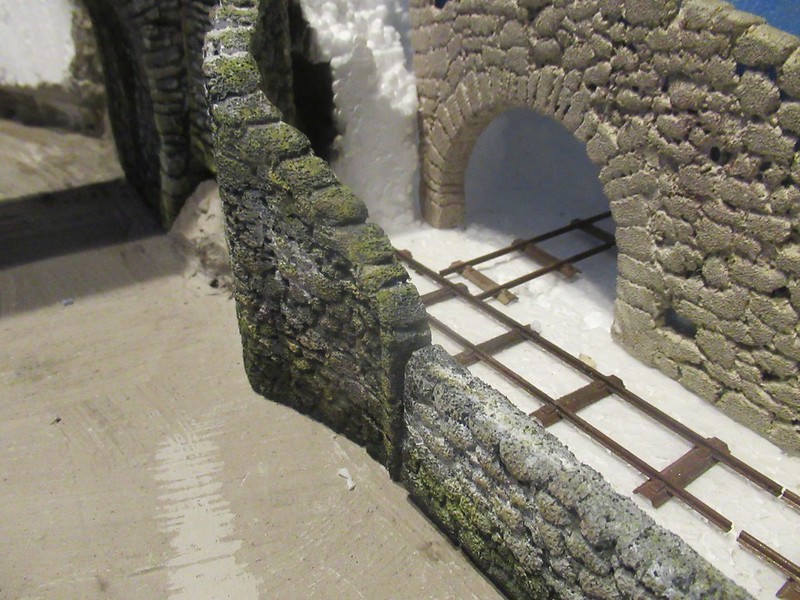 At the 90 degree crossing of the tracks there may have been a portable turntable as for example these... 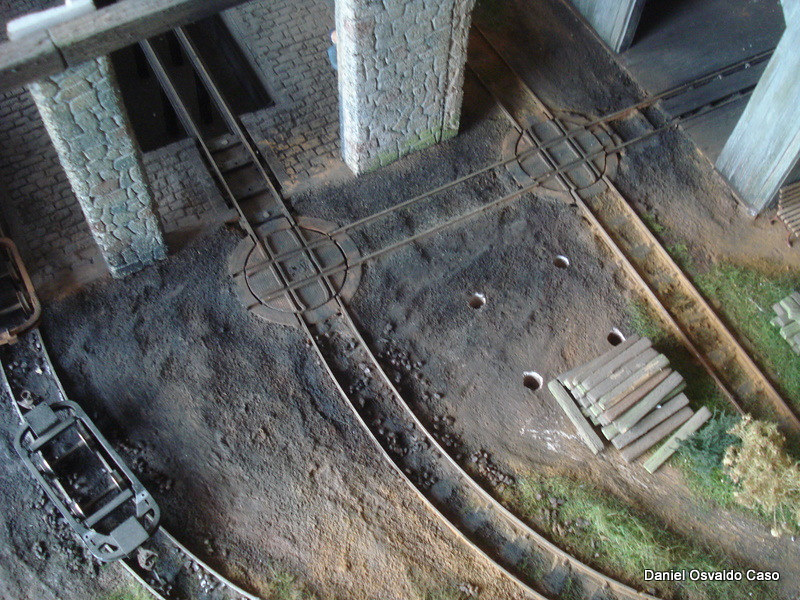 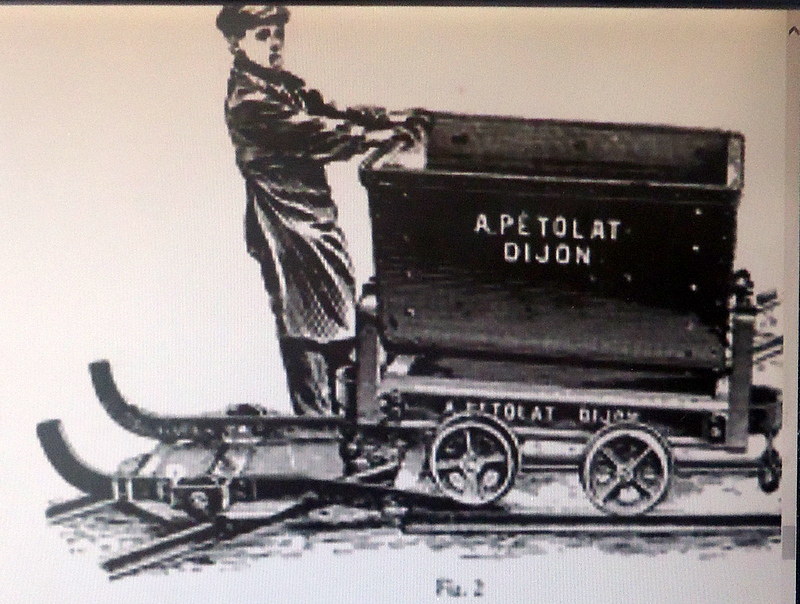 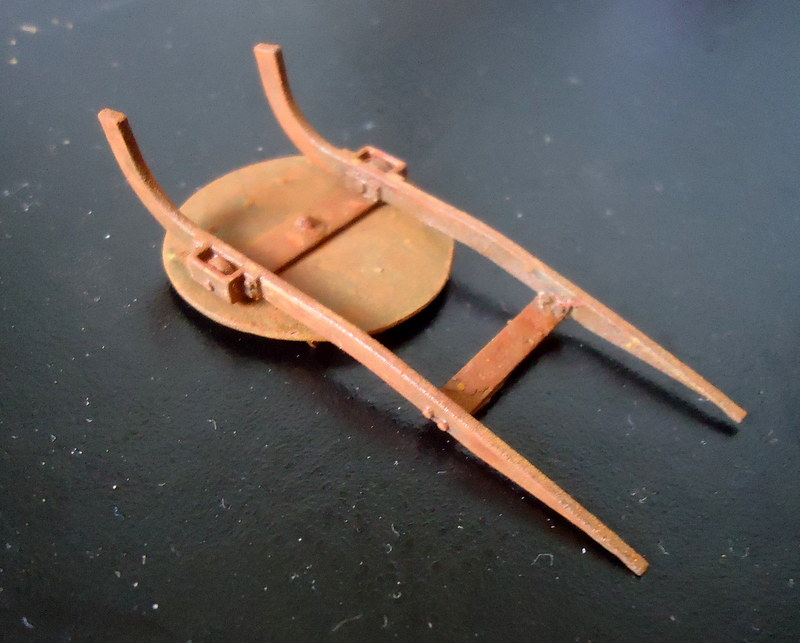 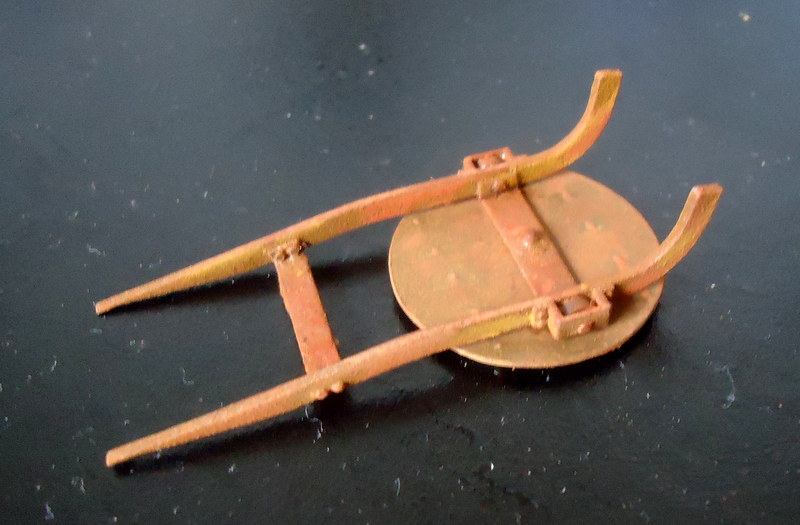 Here, just in case, a scale drawing of a similiar portable point... 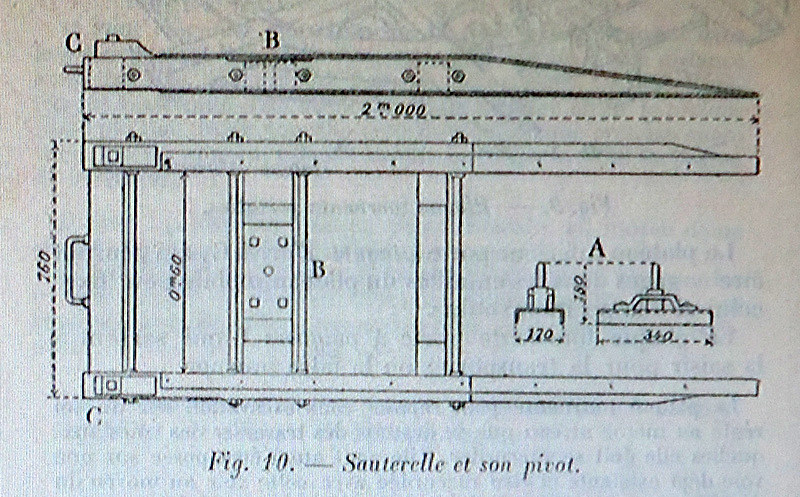 By the way, I posted this image of Mafalda to the NGRM seven years ago. Now, searching images of portable points though my old Flickr I saw it again and notice it's mesaage doesn't belong to time and will always be fully actual: 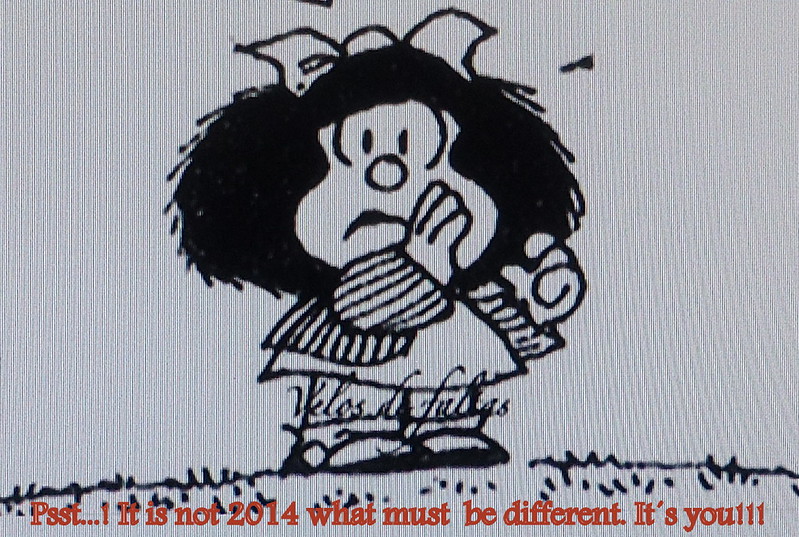 That switch is quite a neat contraption Daniel. What is being moved in the tunnel? Dijon mustard?

Not Dijon mustard but the thousands of interrogation signs about when will Nevadablue get back to his modeling as he did during 2014...

Yes, those portable switches are great. Some uses such a thing to get lazy modellers back at their workbench!

. Amazing how you carve the polystyrene so realistically!
That larger bridge in particular is also very fine - love the distressed look to the wood and the sagging effect

P.S. Nice to see you managed to put Christmas Day to such good use! But a bit horrified to hear about "chopping, throwing away" such splendid work

Thank you for your kind words, PinkNosedPenguin.
The stone carving is a thousand times easier than it seems and every little kind could do it. The important things are

a) looking with real attention real ones and
b) giving one's hands full true freedom to do it instead of playing director and assuming one 'knows'.

There is something amazing in foam: it's incredibly low -if any- memory-, even worse than my lone brain cell's.
That means one can't get back the untouched material if one stone went wrong.
The good side of it is an ugly shaped stone can always be splet in two or more beautiful ones.
Also, if part of a wall, one or many stones, have gone really unnacceptably wrong, it rales a few seconds to cut off and remove that area and fill it with one or several pieces of same or different foam.
Actually sometimes I do that on purpose: filling with bricks or whatever a spoiled area of stones adds lots of realism to an old wall.
The only true trick is investing in it (or whatever one do) our joy. Without that, even if one invested a lot of money in expensive materials and tools, one is missing the essential.
Actually I like to let my hands play with the materials and tools as they were two little boys full of curiosity, just as my dad used to do with me. That's my most important learning moment every single day.

Regarding the chopping & throwing away,
well, I read your message yesterday several times wanting to give you an honest, clear answer. But got tangled in words and thoughts every time so left it for today hoping to find something else to share than letters soup.
Fortunately Mountain saved me with his brilliant words:


Mountain wrote:Doozers from Fraggle Rock used to do that to the lovely structures they would build as they just loved to build and ran out of space if they did not knock down to build some more.


Mountain: I never heard about Fraggle Rock until you wrote that so jumped into the net and then into Youtube.
BIG THANKS, MAN!

You made me laugh! I loved Sprocket the dog.
Modelling On A Budget ---》 https://www.newrailwaymodellers.co.uk/Forums/viewtopic.php?f=22&t=52212
Top

What would a Fraggle Rock Doozer railway look like? Hehe.

Once more an unexpected pause.

First my PROXXON saw (the bigger one) that was my companion for more than fifteen years passed away. Because that little old jewel is always a aprovisory center during the build of a diorama or whatever, it was a critical moment.
Repair was not posible because it was not just a broken belt but also a burn motor and an absoliutelly imposibility of removing the also destroyed gear from the axe.
After a couple of days walking the ceiling I decided to ask, once more, a loan to my neighbor and buy the SAME SIZE BUT much more refined PROXXON FET...

(By the way: the fellow in the film has a whole series of films at Youtube with plenty of genial ideas. No speaking one word, just shwowing as a real master every aspect of each idea as an expert teacher. Great to learn and beautiful to see.)


Not that I liked that because would mean four months with no cent for modeling materialst in order to pay back the loan. Still, it must happen so I put on my coat and hat and right then the telephone rang.
It was someone I havent seen for years that unexpectedly brought me a present in money. I couldn't believe it!
Now I bought the FET and ordered some Makerbeam stuff for making my own sled based on the one in the film but twice as big.

The other good but not nice news is I've got my booster vaccine. Pfizer again, as the two previous ones that had not even a tiny side effect on me but this time is having some and, as a way of saying, took my day away and it seems will take at least a bit of tomorrow.

I was getting worried again. Good to see you, sorry about the bad news but happy for the good news!

Get well and then show us more magic.

I’m off to look at the utube videos.
Top

Nevadablue wrote:I was getting worried again. Good to see you, sorry about the bad news but happy for the good news!

Get well and then show us more magic.

I’m off to look at the utube videos.

Thank you Ken.
No reason to worry.
The fever is gone, also the muscle pain and I am going to do today something that really MUST: the periodic cleaning-rearranging of the two workrooms that get's their joyous but at this point limiting chaos every time I start a new diorama.
Using the blue foam causes a lot less of that but the little expanded styrofoam balls beheave as a plague and after the roughest work is done one must get rid of them all.

Yesterday the work on the new sled advanced a bit more but to complete it I must now wait my order of Makerbeam stuff which I hope will arrive next week. So after the cleaning session I will probably play a bit with the new saw and learn more.

I gave up on his videos, but saw enough to see that the little machine seems to be well made.

He fought with accessories, makes no sense. I’ve never been able to run a table saw with a guard/splitter. I have used a table saw a LOT and still have my fingers. Fighting with the guard makes no sense, especially since he puts the sled on later… no guard there.

Have fun with the new toy! What blade came with yours? He complained about the 36 tooth blade which should have been better than the 24 he had.

Show us pics when you get a chance please.
Top

Nevadablue wrote:I gave up on his videos, but saw enough to see that the little machine seems to be well made.

He fought with accessories, makes no sense. I’ve never been able to run a table saw with a guard/splitter. I have used a table saw a LOT and still have my fingers. Fighting with the guard makes no sense, especially since he puts the sled on later… no guard there.

Have fun with the new toy! What blade came with yours? He complained about the 36 tooth blade which should have been better than the 24 he had.

Show us pics when you get a chance please.

Hmm... Well, may be your approach is quiet different than mine. I have found the slade a marvelous improvement and have been usiung it in both, the now dead FKS 300 and the small KS 230 that you and other fellows from the NGRM gave me as an emergency present many years ago.

Yes, the fellow is focus on accesories and improvements and I have not seen one that I would want to mis.

But, o.k., taste & preferences are a personal thing so we can disagree but if your conclusions are from working with full size machines you are missing a quiet different experience.

Oh, I like the sled. You don’t use the guard on it, right? I always wanted a sled for my big saw but never did get one.

also, that fellow in the videos has some really nice files for download, including a pantograph that looks very nice.
Top

Well, I was going to answer your message with this...

... but then I realized I know nothing and am going once more for good marvelous lessons period, this time at this school:

Probably many of you already use it but just in case:

Being right is one thing, but being true is quite another.
Top
Post Reply
311 posts