minipix wrote:End2End, those are exactly the sort of axles I'm interested in! My challenge at the moment is finding them within budget. DCC Concepts sells them in packs of 48, which seems a little excessive given that I only want 2! Metal axles are probably easier to come by in smaller quantities, and I can probably get a conductive pen for about £10. This definitely sounds like the right solution, I just need to ensure it's affordable too.

I change all my original wagon wheels for Hornby one's. (a Hornby product I recommend 100%). These are easy to remove one wheel to add the spring.
Use your back to back gauge if you have one to reset the removed wheel afterwards.
As you only need 2 springs and I have a few left over, PM your address and I'll send you 2 for free.

minipix wrote:End2End, those are exactly the sort of axles I'm interested in! My challenge at the moment is finding them within budget. DCC Concepts sells them in packs of 48, which seems a little excessive given that I only want 2!

Wind your own from a bit of phosphor-bronze wire.
Portwilliam - Southwest Scotland in the 1960s, in OO - http://stuart1968.wordpress.com/
Top

They say if you have a problem, sleep on it. I'm glad I did. I made some excellent progress as a result.

The first idea was to use a strip of metal to pick up electricity from the tops of both wheels on both sides. I pulled apart an old Hornby power clip that was surplus to requirements, so that I could use the bit of metal inside. I figured it was designed to conduct electricity, and was the right sort of shape and size. Sure enough, with a little trimming it fitted nicely into place in the wagon chassis. I superglued it in place, but it didn't seem to want to stay put so I superglued some little offcuts of plasticard on top to hold it in place. With that idea tested, I did the same for the other side too. The wheels themselves were replaced with some metal ones I had lying around - the centres and the axles are plastic (from another really old Hornby wagon I think), but the main thing is that the tyres are metal.

Next I soldered some test wires in place to connect the wagon pickups to the motor of Smokey Joe. It looked ugly, but it proved the principle! The performance and reliability immediately improved, although I had to hold the wagon down on the track because the wires were so stiff they were lifting the wagon into the air.

With that proof of concept done, I tidied up the wires, re-routing them under the chassis and subtly into the body of the loco. Another quick test showed it all working nicely, although the added friction of the pickups do mean the wagon wheels slip quite a lot - some fettling needed there I think.

One thing I need to mention is my gratitude to End2End, who generously offered to send me some axle pickups. I haven't used those after all, but please don't take that as ingratitude - I'm really thankful for the kind offer, and I'm determined to use those pickups in a future project!
Last edited by minipix on Sun Sep 13, 2020 9:58 am, edited 1 time in total.
Frontington & Backwoods Railway: https://www.matthewdawkins.co.uk/catego ... way-build/
LocoSound - sound effects for DC model railways: https://mafu-d.github.io/loco-sound
Top

Next, I had to make it all look pretty.

I had started with an old Hornby 5 plank wagon, on the basis that it was a fairly short wheelbase, and I didn't really like the look of it anyway - it was in a bright blue livery with "Crook and Greenway" written on it. So I had not qualms about hacking it to pieces! I had seen on photos that the real life tenders people had made for their class 264 locos tended to be somewhat roughshod, cobbled together rather than carefully designed, with no one definitely example, so that made my life easier.

Firstly, I decided that 5 planks was just too many, so I took a knife to it. Now it's a 3 plank wagon! This means it retains the side door detail is all still intact (whether that's prototypical or not). A couple of coats of brown acrylic paint nicely covered up that bright blue livery. The photo below shows it next to another Hornby wagon body, for reference, this time in green.

Next came some details, picked out in black.

Once back on its chassis, it looks pretty good. The wiring is mostly all covered up. The metal weight no longer fits underneath the wagon body though, so I'll need to have that inside it instead. It needs weighting down a fair bit at the moment, because the wires are quite stiff and the wheels need to make good contact with the track while still overcoming the friction of the pickups enough to rotate. I'm hoping I can pile up some coal and other detritus in the wagon to hide the weight.

So that's all got me quite far, in the end. It's lovely and smooth, even over my dodgy insulfrog points, because I now have pickups on 4 axles instead of two.

There's still some work to do though. The pickups need a little tweaking to balance electrical conductivity against friction, but I'm hoping that running it around for a while will help to bed it all in. I'd also quite like to reduce the distance between the loco and its tender - in the photos I've seen the loco and tender don't have buffers between them. And my loco desperately needs a crew too. But it's an excellent improvement, and makes my pocket rocket much more controllable and feels less like a toy!
Frontington & Backwoods Railway: https://www.matthewdawkins.co.uk/catego ... way-build/
LocoSound - sound effects for DC model railways: https://mafu-d.github.io/loco-sound
Top

Nice work. I swapped out the motor in mine for the older Johnson 111 used in the original models. It's still speedy but slightly more controllable. The more recent models have much better slow running.
Gerald H - BNR Correspondent :)

I see you've cut out the wagon front. Somewhere I saw the Caledonian yard 0-4-0 with a cut
down wagon, sorry I can't point you to the picture, but that was probably 10+ years ago !!
Here you can see my wagon 'tender' where I cut the rear end and sides to match the picture.
At that time the loco & I think wagon had dumb buffers (Blocks of wood) and the back end
of the wagon had all sorts of junk that they may need when shunting around the yard, something
I never added !! 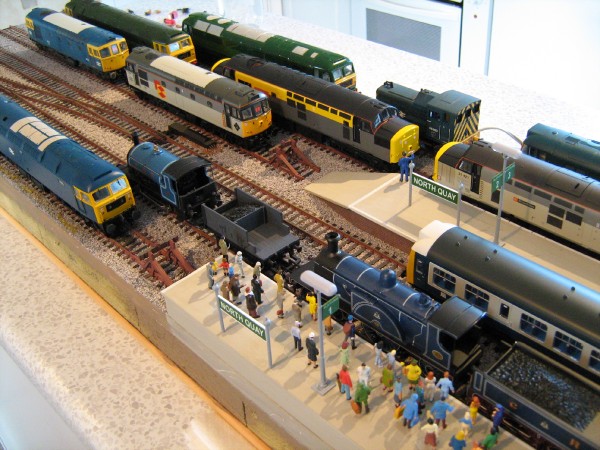 I certainly think your project is great and now with additional pick-ups you should have good
running qualities.