Smokey Joe was one of my first locos, back when I was a kid. It was a great toy, and I enjoyed playing with it. Not exactly realistic, but I wasn't to know.

Fast forward a few years, and I've become a "big kid", with a much more grown-up looking layout. But I still have a soft spot for Smokey Joe, so I've been working on making it fit in better with the rest of my locos. The comical white text scrawled on the tanks looked really out of place, and it still went like a rocket. But where there's a will, there's a way.

One of the easiest first steps was painting over the side of the tanks with black acrylic paint. It gives a dull and uneven finish, which is exactly what I wanted - a run-down, functional shunting loco. I attempted a little light weathering too, just to add some water streaks here and there, although I don't think it comes out on the photos very well. While the paints were out, those buffer beams were nicely transformed with a little red paint; again, nothing too bright. And while the cab isn't detailed compared to modern locos, there are some moulded details that I picked out with a silver pen.

That was a few years ago. Since then, I've added other locos to my collection, slowly but surely increasing in quality. And last night, still unable to let Smokey Joe retire completely, I had another go at it. One of the glaring problems was the wheels, which were uncharacteristically shiny. So, once again, the acrylic paints came to the rescue. Not the best job in the world, but that's kind of the point - this isn't meant to represent a valuable loco that will attract the crowds. I painted the connecting rods, the wheel centres, between the spokes, and even a little around the outside of the wheel (not on the bit that goes on the track, of course). All that shiny metal disappeared into grubby blackness. Another coat on the connecting rods wouldn't go amiss. But it's a great improvement, I think.

I also added some handrails. As I understand it, they were included on the very first iteration of this loco, but the moulds were simplified for subsequent tooling. But, looking really closely under a strong light, I could just make out some little dimples in the moulding of the tank that looked suspiciously like where the original handrails would have attached. I'm guessing they just filled in the hole in the original mould. Anyway, that gave me a reliable guide for where to drill my own holes! The handrails themselves are bits of magnet wire, painted black. They're a little fragile, and not completely straight (but there's a running theme that can justify that!), but they look the part once attached.

The final bit of detail I added was going round the cab windows with a bronze Sharpie pen, to give the impression of a window frame. There's no glass there, but it looks much more deliberate than just a hole.

So that's where I've got to so far. Next steps will include replacing the motor (which is growling horribly from years of misuse) and adding some real coal. Looking at photos of the 264 class, there are several that have the coal piled right over the firebox, almost up to the whistle. That makes sense, given how comically small the coal bunkers look on Smokey Joe! I'm not too worried about the performance - I know people refer to it as a "pocket rocket", and there's no denying its top speed is ridiculous, but with a good PWM controller (mine's a Gaugemaster DF) I can still get realistic crawls from my Smokey Joe, even with its dodgy motor. Once the new motor is in, I'll try to record a video to show it in action!
Frontington & Backwoods Railway: https://www.matthewdawkins.co.uk/catego ... way-build/
LocoSound - sound effects for DC model railways: https://mafu-d.github.io/loco-sound
Top

There's a lot more to those little pocket rockets than many will admit.
My running by DCC can be superb, slow and predictable. Much aided by packing
as much lead into any place you can, particularly the plastic chassis versions.

My favourite loco is still my 0-4-0 06 class diesel shunter that uses the same old
0-4-0 chassis. They just need taming and tarting up, nice job !!

A lot of the 264 class (and the very similar NBR Y9 class) ran with wooden tenders, like a cut down coal wagon with the end nearest the loco missing. They gave the locos a much longer range and also seem to have acquired the usual detritus associated with shunting - spare lamps, couplings, chocks, even a bike in one pic. 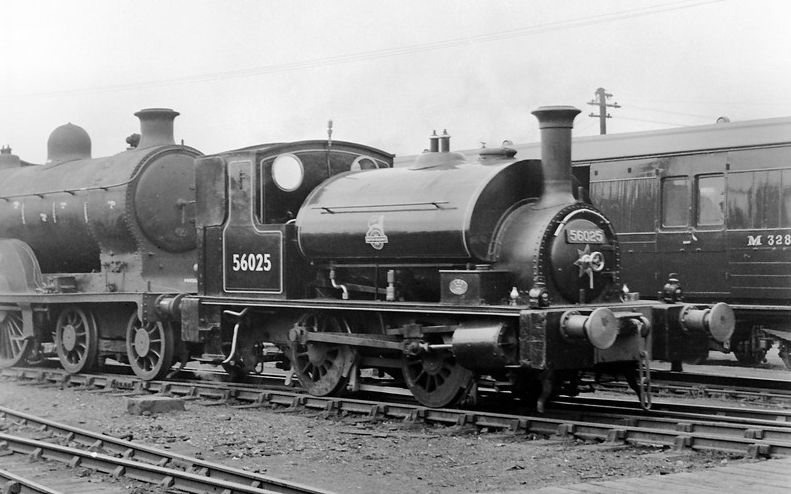 Just looking at these photos made me wonder why Hornby included the prominent springs below the saddle tank, the Caledonian 0-4-0 pugs were derived from a Neilson and Co. design which do have prominent springs, the NBR had Neilson build the Y9 for them and kept much the same design so the Y9s also have the springs visible. The Caledonian bought a couple but them decided to redesign them and in their design the springs are hidden

Here is an original Nielson 0-4-0 "Kelton Fell" and NBR Y9 at Bo'ness, you can see the springs on these

Smokey Joe's reputation has found its way onto Shapeways
Link to shapeways image.
Growing old, can't avoid it. Growing up, forget it!
My Layout, My Workbench Blog and My Opinions
Top

The springs are above the footplate on some 264s and below the axleboxes on others, it varies between batches and sometimes between works visits as does the pattern of driving wheels, position of rear sandboxes (and presence/absence of same) and provision of buffers. For a comparatively small class they are almost as much of a minefield as Black Five boilers !

Thanks for your comments, everyone. Great to see some more photos of the real thing.

I ordered a new motor for Smokey Joe, which arrived yesterday. Installing it was a breeze. It certainly sounds much quieter than the old motor, and I'm pretty sure it's a little slower too. Unfortunately the performance is still a little temperamental, but I think that's more to do with the pickups than the motor itself. The motor is held in place with a clip, with the motor's pickups pressed down onto the metal pickups that go to the wheels. It's an odd design choice, and I'm wondering whether actually soldering some wires in place might be more reliable.

And of course as people have suggested I could use a shunters truck for extra pickups.
Frontington & Backwoods Railway: https://www.matthewdawkins.co.uk/catego ... way-build/
LocoSound - sound effects for DC model railways: https://mafu-d.github.io/loco-sound
Top

I think connecting up the pickups and motor with a pair of wires is probably the best solution. I've noticed that Hornby 0-6-0s which were designed with similar spring contacts were later produced with wired connections. If you have any intention of converting it to DCC changing it to wired pickups and motor is an essential first step. I'm sure this is why Hornby changed the 0-6-0s.
Growing old, can't avoid it. Growing up, forget it!
My Layout, My Workbench Blog and My Opinions
Top

This afternoon I took Smokey Joe apart (again) and soldered wires to the pickups, as suggested. In case anyone's interested, the motor has to be turned over, and you have to remember to cross over the wires otherwise the polarity will be wrong and it'll run the wrong way. I did think of this beforehand, and then completely forgot when I came to soldering, and only remembered when I put it back on the track! The good news is that the wiring is all good. The bad news is that the performance still hasn't improved.

I do like the idea of a little tender, as I've seen a lot of mentions of the real life 264 class having them. I've got an old Hornby coal wagon that might do as a donor, I just need to figure out how to get electricity from the wheels. I like the idea of using pickups on the axle rather than using wipers on the wheel backs, which sounds rather fiddly. Here's a photo of the chassis (top removed while I play around with things).

minipix wrote:I've got an old Hornby coal wagon that might do as a donor, I just need to figure out how to get electricity from the wheels. I like the idea of using pickups on the axle rather than using wipers on the wheel backs, which sounds rather fiddly.

I've actually done this with a Circuit Works CW2000 Nickel Conductive Pen and DCC Concept pick up springs. It's quite easy just remember to only paint the conductive pen on ONE wheel PER axle making sure the axles pick up voltage from separate tracks. 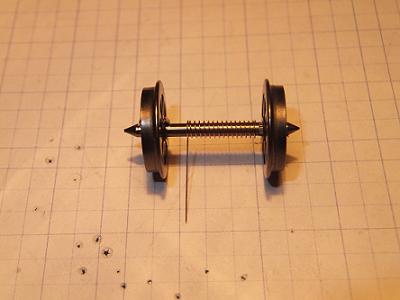 One source of poor control of theses 0-4-0s is the contact between the worm and gear. That fearsome spring that holds the motor in can force it down so hard that the worm is actually pressing against the bottom of the thread. You can experiment with adjusting the pressure by putting shims between the motor casing and the point where it should press on the diecast bracket. It involves some faffing around trying different thicknesses in different positions, but it can make the motor spin more freely. I've noticed that the latest samples seem to be somewhat better. I suppose after making it for so long you're bound to get it right eventually.
I remember on one of the narrow gauge forums someone had done a lot of experimenting with different gear combinations and come to the conclusion that the standard gear and worm that they fit now was as good as you could get it, because raising the ratio risked introducing more friction, leaving you no better off. The only success I've had changing the gears was to fit the combination used in the Triang designed motor bogie that preceded the ringfield. Unfortunately there's no part numbers for them as the worm is part of the armature, and the gear part of the wheelset.
Growing old, can't avoid it. Growing up, forget it!
My Layout, My Workbench Blog and My Opinions
Top

End2End, those are exactly the sort of axles I'm interested in! My challenge at the moment is finding them within budget. DCC Concepts sells them in packs of 48, which seems a little excessive given that I only want 2! Metal axles are probably easier to come by in smaller quantities, and I can probably get a conductive pen for about £10. This definitely sounds like the right solution, I just need to ensure it's affordable too.

Found this we beauty in my files, downloaded it from the web a long tome ago as I had a thought about building one myself