Funny you should mention Airfix. I was looking at some Airfix couplings the other day. Compared with the competition
at the time they were so much ahead. A form of sprung loaded narrow tension lock in the 1970's

Today I've more or less made up a Parkside PC48 GWR Mink 'G', so easy to make up after the coal hopper. No pictures of
parts before starting, this was my first shot. That underside shot compared to one with just a few modifications. Brake cross shafts, oversize because all I had was 1.0 mm
plastic rod. The vacuum tank brake attachment, but all very easy to add to the well executed model design. Couplings on and ready to roll !! A painting session due tomorrow, this one BR Bauxite as I already have one in GWR grey. This is now going to be slow. Tomorrow it Might be dry enough to hold by the sides while I paint
the ends. If not I'll do it some time - Who said sometime never ?? 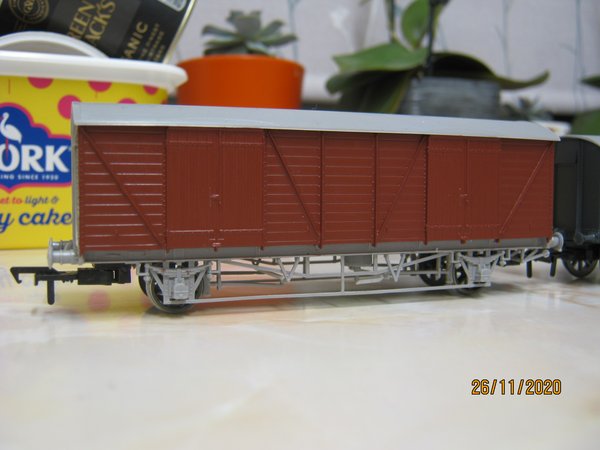 Back on page 78 I had built 2 x Ration GWR iron mink wagons, but as often happens I drifted off into
other jobs. So while the camera was out i took photos. Just to prove they're not forgotten although the large GW lettered wagon could do with end numbers
and both warrant weathering, sometime.

A cold day, well by south Dorset standards and we're not allowed out to have a party !
So kitchen table beckoned, for no good reason other than I could, I put end numbers on the earlier running number
Iron Mink. These put on up to around 1925 and left until repaint. All individual numbers from a HMRS pressfix sheet. I think I've made 22 wagon kits up this year and modified, or painted over 20.

MMM no wonder I'm running out of space.

I've now got around to putting decals on the Parkside BR (W) Mink 'G' van.
The newest issues of this kit, now in the hands of Peco come with decals included.
Mine was an older Parkside Dundas, so I either bought a special decal sheet, or made
up my markings from my collection of left-overs and Fox generic decals. Unfortunately
the Fox wagon numbers sheet was rather feint and didn't match too well with the generic
sheet from which I produced other markings. Examples of cutting up seen where the 20T is made up from the 2 and T from a 12T decal
with the 0 coming from the line of other small numbers. The W from this same generic
sheet, as I said a shame the Fox blocks of 3 numbers were not matching !!

Next back to Dapol.

No build photos as I throw these together so quickly, but another Dapol 16 Ton Mineral
joins my fleet. I'm getting near to having made 30 of these kits which do make up into
good models. One thing, IF you intend running empty remove the moulded in part numbers.
In fact should you want to be very fussy fill and sand smooth the moulds round hollows !! Making the side doors open is easy, but as I don't need that these have been stuck in by that
first coat of grey paint. If wanted open then paint them while open and scrape top & sides to
allow to fit back easily.

If you intend using brass bearings then drill out (2.0 mm) the axle holes until you're almost through.
Then countersink the hole tops with a 3.2 - 3.5 mm drill until the 'Top-Hat' can sink well into the
axle box. IF NOT then you will end up with splayed 'W' irons. Though if fitting without they will
probably be best left alone - I don't know because I ALWAYS use brass bearings !!

I just HAVE to start some weathering !!

These Dapol 16 Ton mineral wagons are an ideal kit to start with. There are a few wrinkles,
particularly if you intend using brass bearings. Also super care to have opening doors.

If I thought it would tempt anyone else to try I could do a thorough 'low down' from buying
to running. Thinking I may try weathering tonight.

After a pause to gather my breath I've actually weathered the Dapol 16 ton mineral and my Parkside
21 ton hopper.
Here you can see the 16 ton mineral between two Bachmann factory weathered versions. It fits in
quite well. Behind that is the more lightly weathered Parkside hopper. Last evening I saw PC49, no nothing to do with 'Dixon of Dockgreen', but Parkside PC49 a LMS goods
brake van. Already coming along well !!

Mentioned in my last posting is the PC49 LMS brake van.
I was well through the build before I took any photographs. I don't know if it was 'lost' before it came to me, or just not packed, but I had only 1 length of
grab rail wire, even that wasn't enough for all the rails. that little scrap laying by the pin should
have done one of the entrance rails. Luckily I do try and keep some 0.5 mm brass lengths, although
that supplied is 0.45 the difference doesn't show too much, certainly O.K by my eyes !!
Seen along side one without ducketts made in 2018 This latest build is in post 1936 LMS Bauxite and destined to have small markings low on the lefthand side. So to all that follow the thread have a safe & happy Christmas - Covid will be cracked in 2021 !!

Dad-1 wrote:So to all that follow the thread have a safe & happy Christmas

Thank you and best wishes to you and your family too.

As an avid follower my NYR has to be to get more kits built, my total for 2020 was a pathetic single 16 ton mineral.
Dave
Top

Quite a long time since I posted. The basic reason is the shortage of Bachmann short narrow tension-lock couplings
with their NEM pockets.
First I thought I'd add a picture of that Parkside LMS brake van with decals on. Another task has been trying to catch up on some decalling. The Ratio GWR 5 plank wagon kits are great representations,
although it has to be said rather delicate. I've inherited half a dozen from Derry that I wanted to add to my existing models,
but for some reason they were in small plastic bags without any decals.
I checked my HMRS sheets and although I had enough decals to do the work they were rather different. Even the size of the
GW's for each side didn't fully match. I rang Peco who could supply me with the 6 sets I wanted, although being close to
Christmas I was advised they wouldn't be despatching until the new year, not a problem.
So tonight I decided to put some on. Oh Dear !!
The new decals are printed on a highly glossy film which does not respond to Microsol fluids. The film is rather stiff with poor
adhesion to my satin finish paintwork, yes I know high gloss is better, but interestingly the wagon numbers made up from
remains of my earlier decal sheets were fine.
24 hours after putting the decal on I thought I'd give another wetting of Microsol fluid which was enough to float the decals off
and they moved by gravity when the model was moved up to 45 degrees !! Crazy !!
Now my last two Iron Mink wagon kits had similar quality glossy decals - they do not stick well, lifting as they dried and as said
Microsol fluids couldn't get them to conform to surface detail.
I'm tempted to write to Peco, I know they think complainants are just poor modellers and it's not their product defect.
I suppose I should try on behalf of those who will be buying the kits, even for their reputation for quality. Soaking in Microsol fluids, the old decal cut up numbers responding as expected. And another couple of 16T minerals slide into your fleet too

I've always said you can NEVER have too many 16 ton steel minerals.
Although I've reached the level that I DO have too many wagons here,
but as to cutting back ? Why ? I can still find the odd corner for a few
more.

Geoff, because of the poor quality of both Ratio and Coopercraft transfers - either too glossy, too much carrier film or simply too little sticky - I standardised on Pressfix exclusively years ago. One or two items cannot be covered in that way (eg rakes of Micas or that Dynamometer coach) but they do provide for most things (even if you have to buy a couple of sheets) and are really easy to apply. I cannot remember the last time I used a true water slide, but then my wagon building is not as prolific as your’s!!!!

Generally I get away with the kit decals. Even at the height of my aircraft modelling I knew some would be problems.
Early Eastern European decals had so little varnish they just broke up as the adhesive softened. Gradually you built up
a knowledge base, so some would be given a thin coat of varnish before you put to water. Then one company had lock
in place on first touch to paint, again the plan was to water down some Crystal Kleer and slide the decals onto that. while
they were floating on that you could move into place before they grabbed.

I hope I've cracked these rather poor 'new' Ratio decals. I added a coat of Tamiya gloss acrylic varnish, then go through the
full Micro fluids programme. Slide the decals onto a film of Micro-set, when in place and lightly dried, whet with a film of
Micro-sol. The Micro-sol seems to have an effect on the Tamiya varnish that then seems to stick !!

I have written to Peco because the 3 of these wagons I made in 2015 with different looking decals were working fine. In fact I've
had to use the remaining running numbers, all cut up and re-joined on these new builds. There can be no argument the newer
decal are poor quality and I'm prepared to go and see them to show that after 60 years of using decals I know what I'm talking
about.

Anyway here are the current 6 behind a part built Parkside 7 mm 16 ton mineral. I believe I may have a pathway to Michael Pritchard (MD) so if they fob me off too easily it may come back to bite someone.

I am now in communication with Peco.
I know many time waster moaners spout off, but in their normal courteous way
I've had a reasonable reply and we'll have further communication. Who knows
we might help improve future decals - far too late for what's already in the system.