Since you can't find anything about it no one can prove it didn't exist.

I stumbled across this while Googling for "coke rails" http://www.cs.rhul.ac.uk/~adrian/steam/ ... index.html ... among other things

It didn't specifically mention a 5 plank wagon with coke rails, but does offer some reason for lee-way in designs.
Regards
Rob
Top

Those are very interesting drawings for any wagon enthusiast, thanks for the link.

The Ratio 1500 series I'm certain also included the GWR Open 'C' 14 ton timber/tube wagons. The
very kit that I was/am working on directly before starting this Coke wagon. It's moulded in the same
hardish black plastic, again with more than a few shortcomings. Unfortunately I didn't get any instructions
with the open 'C' as well as many parts being missing.
Inherited at the same time I have a plastic bag with a 5 plank open wagon. This time moulded in a cream
plastic as used later by Ratio. It may, or may not be an early Ratio, but having made 3 of the later issues I
will recognise the parts and have instructions, which again are not in the bag.

Back to Coke, it seems that many coke wagons were private owner, particularly timber planked types. So
they could have been run by any smallish gas works, the majority of available models have been based on
7 & 8 plank wagons with the additional raves to get more volume into a wagon. Weight was not a problem,
a 5 planker is quite small volume hence the chance to make representing a small town works perhaps in
my case Dorchester Gas Company ?

maybe that's why they would add a few coke rails?
Regards
Rob
Top

Alexander Court wrote:Cant be certain but came across a reply to a post on here about lost ratio rolling stock kits where 'mahoganydog' mentions finding a "1502 24T Iron Ore Wagon" which is described as similar to Bachmann's 37-508 in type (whatever that is?)
Alex

Interestingly this 5 planker has 3 raves along the wagon sides, the usual was just 2, but on 7, or 8 plank wagons.
The result is that this is of a similar height and therefore volume, no doubt a conversion of an available wagon.
Here it is sitting alongside my other coke wagon, a Mainline RTR that along with most of my stock has been converted
to Bachmann narrow tension-lock couplings. This picture taken during coupling height adjustment while the glue sets. 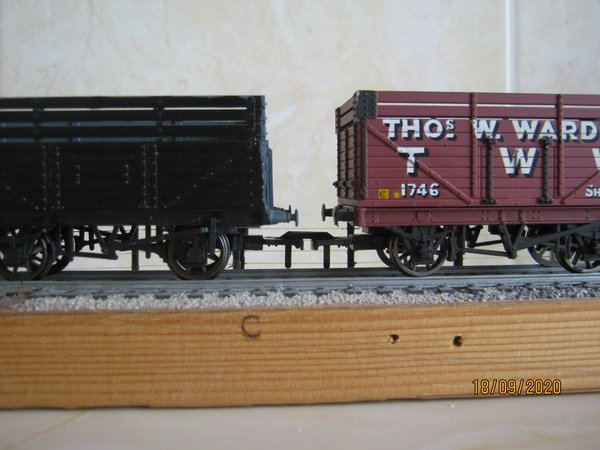 Now with the body painted. 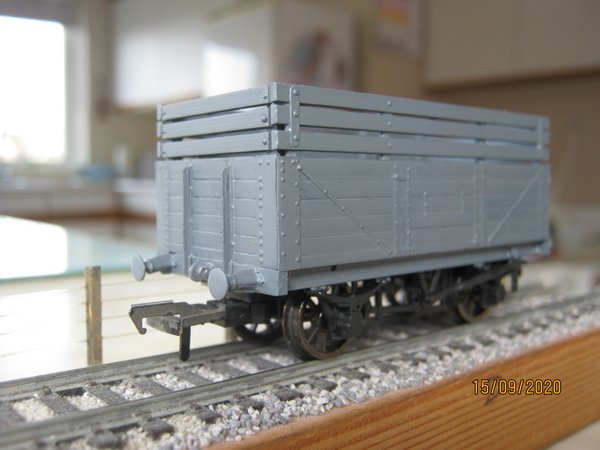 Now Alexander Court, Yes that Open 'C' is one of the missing Ratio kits, but the only instructions I've ever seen for the
Open 'C' is from when Ratio had moved to Sturminster Newton in Dorset around 1973 ?? It is possible it was in their
range in the late 1960's, certainly the plastic and presentation is like their earlier production, but listed as kit 5061.

Either the moulds were damage, yes perhaps lost, but I have a feeling they decided these were not up to the later
standards and just dropped them from their range and didn't pass the moulds on to Peco when they gave up.

To quote from that other model railway er...forum;
"Il Grifone
Posted October 15, 2013
The original plastic Ratio kits were a coke wagon (17' 6" length 5 plank on a 10' wb steel underframe - RCH spec. was 9'), a 24T* hopper wagon, a NBR cask wagon (overwidth) and the OPEN C (this has 'hockey stick' diagonal strapping and no chain pockets). The last two share an underframe though the cask wagon has grease boxes whereas the others have rather poor GWR OK oil boxes. All came with plastic wheels and Ratio's version of the NMRA X2f coupling. Later kits included a TVR bogie bolster (GWR MACAW G) and an LMS bogie ore wagon (ex CR?)"

Found an ad in Railway Modeller 1960 January for the coke wagon. Apparently, is was the first in the '1500 series'. So called because there were supposed to be 1500 models made as a limited production. Priced at 5/10.

Since many Ratio wagons have been around for decades, I assume that the 1500 count, was quickly forgotten!"

Hope that additional information is of some use to someone xD

Thanks Alex and Geoff - great info.

Just built 2 of their LMS 3-plankers (573) from the Parkside latest packaging - they went together great, but like all plastic kits needed care over the fitting of wheel bearings and axles.

I will be writing to Peco - to enquire over the possibility of re-introduction of decommissioned kits - for me the 24T Ore hopper and Open C - anybody want others from the Ratio/Peco/Parkside range ?
Pete

Ratio discontinued production of their Open C wagon as the moulds wore badly and were too damaged to continue using.

Incidentally, my two were made from a slightly softer grey plastic.

I found some additional information at the Brighton Toy Museum.
Ratio, started with wood coach bodies in 1950, began plastic around 1958.
Their Chorleywood address as on my packet was operational between 1959 to 1961.

This means my kit is as near to 60 years old as can be accurately dated !!

Now they 'aint perfect, but when you compare to say many Triang models of
this time their models were good !!

With Hornby spoked wheels & Bachmann couplings in Peco mountings it runs a treat.

No you can't buy them for 5/10, five shillings and ten pence for youngsters who may not
understand the old way of pricing. It amounted to a near as damn it 29 pence.

Don't believe everything you see on that, or any other website, or even Wikipedia.
Some of that critique is wrong.
The GWR Open 'C' were made in several batches over many years. Not all had
hockey stick strapping !!
I'm going to make a 019 series that had straight strapping as well as Self Contained buffers.
Proof - small very poor scans I wasn't going to damage the spine of my GWR wagon book. 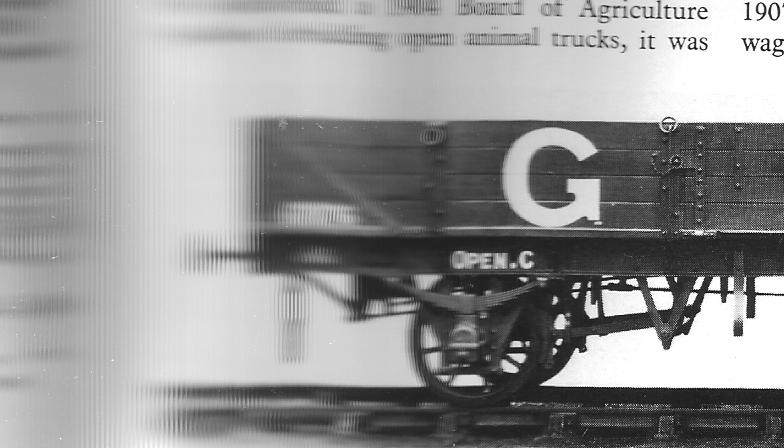 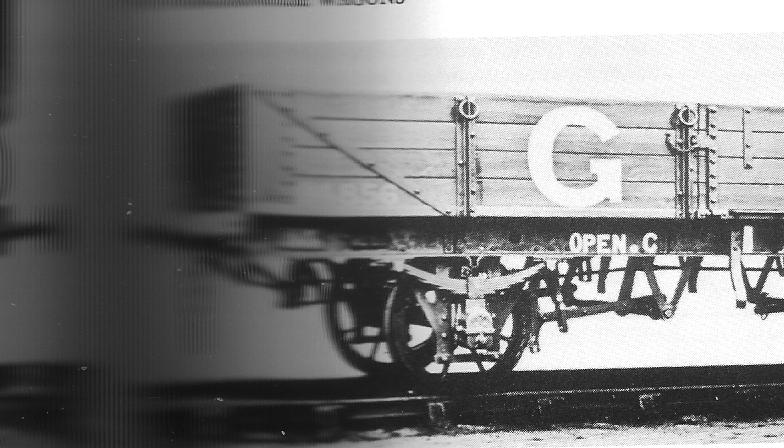 Always doubt information, double check where you can & if insufficient information decide what you are prepared
to accept on your layout. Some things that never existed actually did.

Hi Alexander and all who read,

Been busy since that last posting regarding 'faults' with Ratio models.
Now I've thought about that comment that the RCH 17'6" planked wagons had 9 ft wheelbases.
Yes many did, but there are also many later that had 10 ft wheelbases, some even had 9'6" a wheelbase.

As Coke wagons belonged to Private Owners they were 'various' as could be bought at the right time
for the right price. Searching has so far not revealed ANY prototype picture of a 5 planked, 3 rave,
coke wagon. In that case until such a thing is revealed there is no proof either way as to what may
have been used. So as far as I'm concerned they could be either 9, or 10 ft chassis.

I recall a guy at a model aircraft exhibition telling someone his model never flew in 'those' colours.
The ex-RAF pilot modeller explained that was how it was when he flew it !! Take care of the accurate
information you may read - 2 sources at least before you begin to believe.

The other old Ratio kit now getting near completion.
On 13th September I posted a picture of the slack in the wheel bearings in chassis of my old Ratio GWR Open 'C'.
To get the full story (to date) I show again that first picture, then followed by one showing my horseshoe fillers. 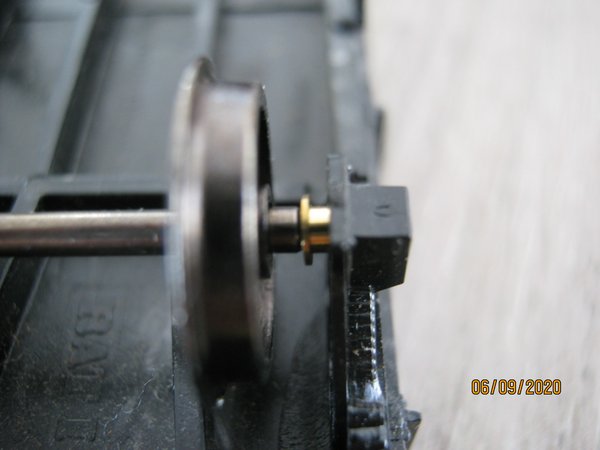 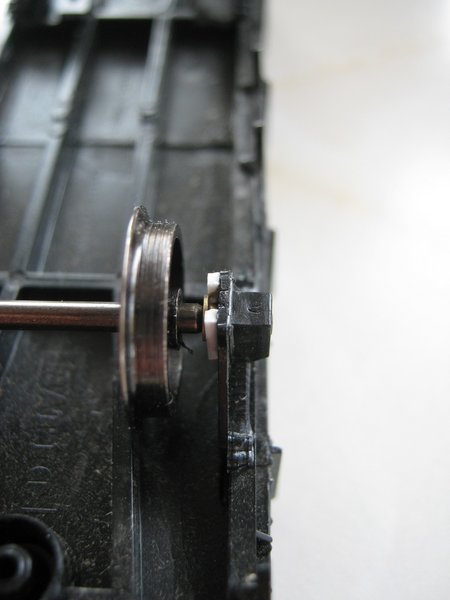 The main body was already together, one of the rather poor representations of side door stops was snapped off.
There was only 1 'V' hanger, so I had to make a set of my own from microstrip 0.75 mm x 1.0 mm. 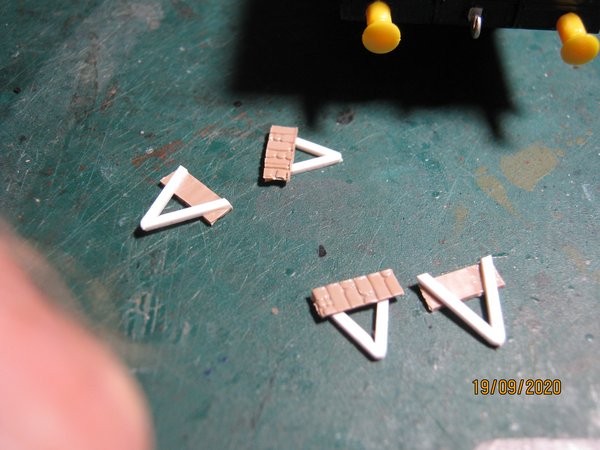 They didn't look too bad, but wouldn't be as strong as original one piece parts. To try and add some additional
strength I put in rather overly thick cross shaft from 1.0 mm rod. 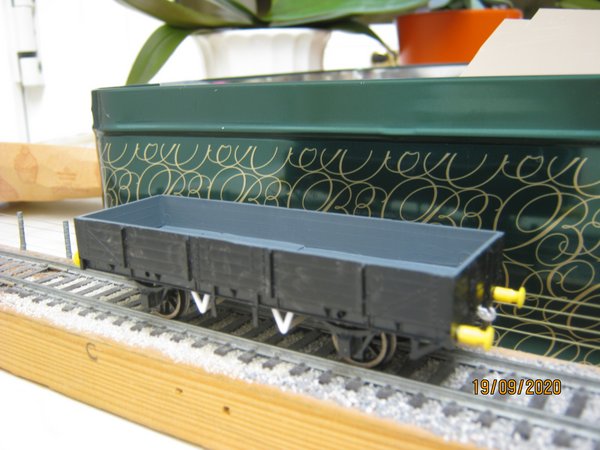 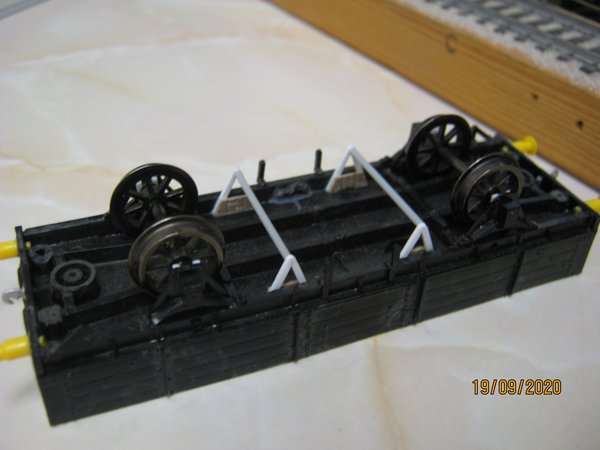 The buffers were missing. I had some left from an Airfix Presflo that looked superficially like GWR self contained
buffers used on the 019 build of these Open 'C' wagons.
When painted it was beginning to look like a wagon ! 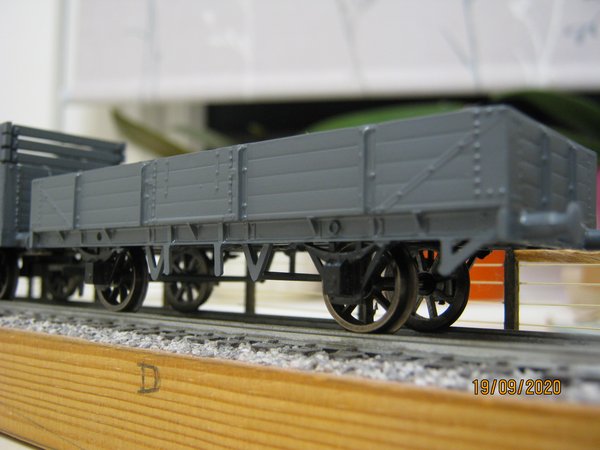 The brakes as supplied were all wrong and had to be re-modelled. They were one side detailed, however they
needed to be fitted the wrong way around on one side. Luckily not a place that gets too much attention when
in use. 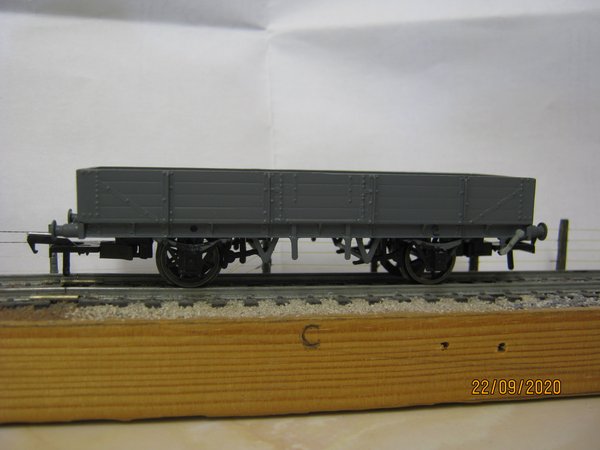 With the DC III brakes an outer hanger was moulded in the kit, but it only contained Morton brake levers I found
some DC III levers from another kits alternative parts, but with couplings fitted the inner hanger (not supplied)
couldn't be in the right place, but I made from microstrip and mounted alongside my couplings. 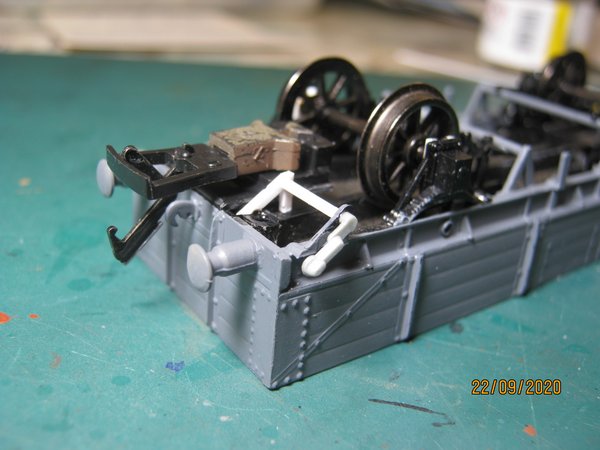 I now have to paint the underframe grey, then add livery markings.
Pictures of the original wagons do show a brake tie bar running through the rather empty centre of the under
chassis. I can't decide if I should try and add one from 0.5 mm brass wire. It would show in low photographs,
but with many other intransigent faults is it worth the effort ?
The biggest fault to me is the ride height which is about 1.5 mm too low, they should look leggy and empty underneath.
It also means the buffers are a similar amount too low.

If you're a perfectionist please look away, or the views may offend you !! (Tongue in cheek joke)

Is usually the case where ride heights are too high. Would adding larger wheels solve the issue? Only downside is if the larger wheels are noticeable and if they would fit.
Modelling On A Budget ---》 https://www.newrailwaymodellers.co.uk/Forums/viewtopic.php?f=22&t=52212
Top

With this kit, larger wheels would probably rub the underside of the floor if, indeed, they could be fitted at all. I seem to remember this problem.

No, larger wheels wouldn't help much regardless of whether they would fit, or not.
While they would raise the buffers, visually they would look so wrong with such a
large area hidden behind the solebar. If you look at the (poor scans) pictures of
two different Open 'C' wagons I posted earlier you'll see how little of the wheel
circumference is hidden. You'll also note how fine the original wheels were in
comparison to model railway wheel sets.
The 'W' irons are what's out, just too short. You can't add a 1 mm + strip under the
solebars without that looking so wrong. What I have got is a working replica of
a GWR Open 'C', that when running in traffic won't look at all bad. It is a long way
from being perfect, but my argument against those from a particular Webforum
who will rant on about inaccuracies, is simply it's a '00' wagon, running behind an
electric powered replica of a steam powered locomotive. Say's it all really ?

A picture of it in it's full (simple) livery soon.