I do like this subject, but already I can see where I could have improved on my results.
As yet it's nowhere near being pulled along in a train to see how it behaves. That will
have to wait until I have some Romford 3 link sprung couplings, on the way, perhaps a
couple of days.

One of the difficulties for anyone wanting to draw along in a train is the fixing of any couplings
other than 3 link. Any other type will foul the openings in each end of the solebars that hold jacking
girders used to provide support on anything over a certain lift weight. 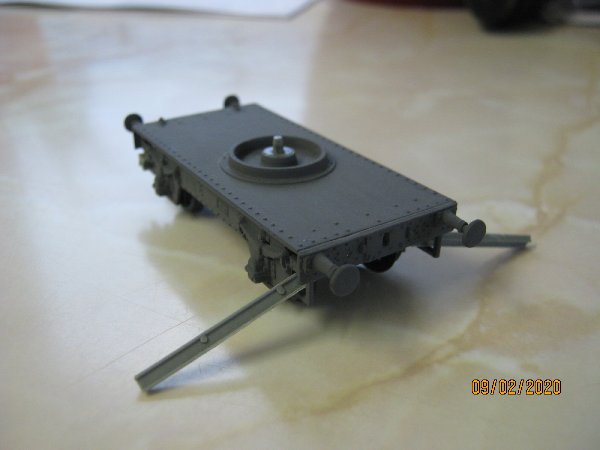 As can be seen they have to be cut, just keeping the protruding ends to make the central area free
for couplings. The other end where 3 links should give me the space there are the complete girders.
I had problems getting some weight under, a very old pure lead weight still needed some trimming. 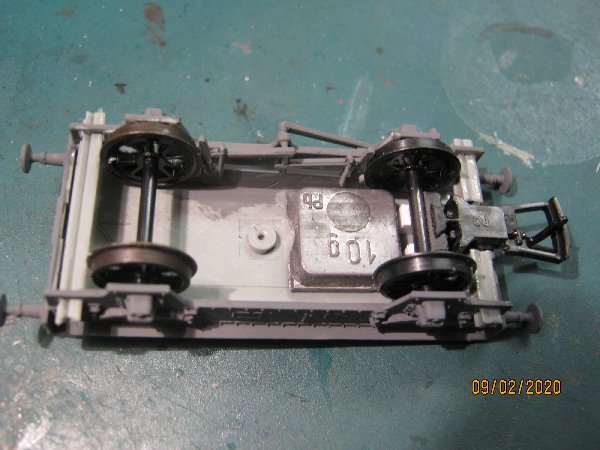 It's difficult to get cross shafts into place after joining the two sides, I also didn't have the end locations
dead oposite each other. 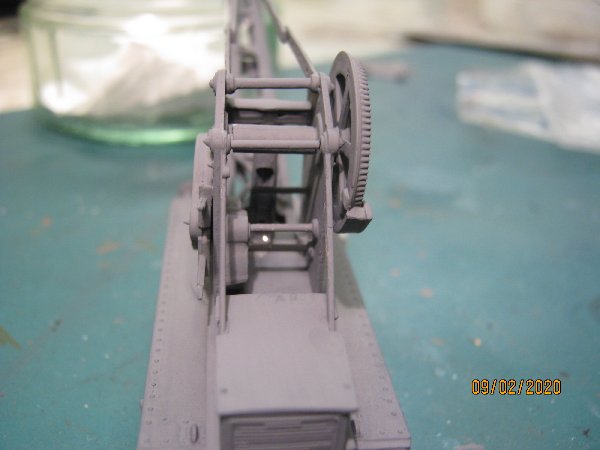 During my searches I found some pictures of one rusting away on the Severn Valley Railway. The basic
colour being GWR wagon grey, however the jib above the trunnions that hold jib support bars was white. 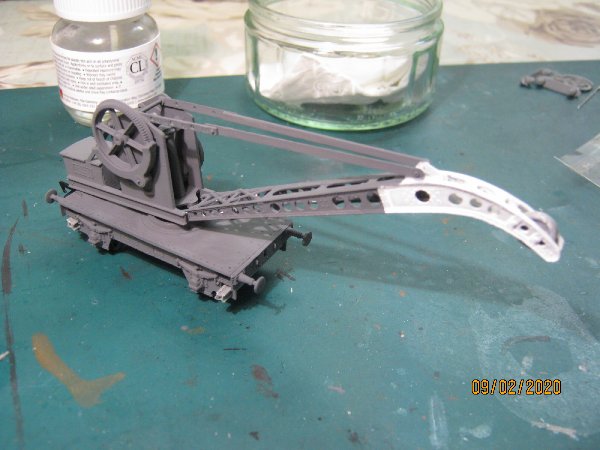 Now fitted with tension-lock couplings at each end. 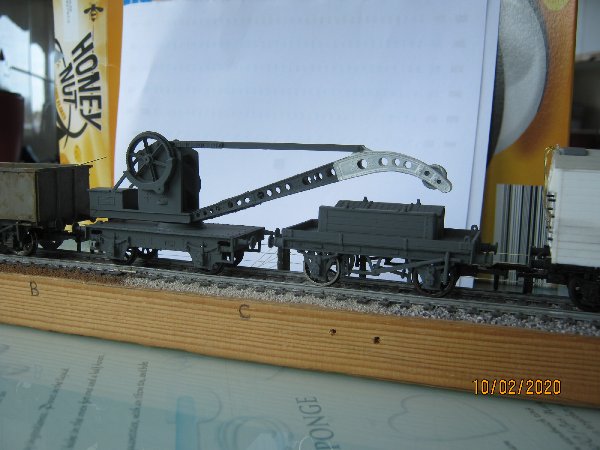 One interesting 'Aside' is that this is sold as a 6 ton crane.
Yet reading the warning plate on the end of the Severn Valley relic it's
instructions give the maximum weight at 16 ft radius, the minimum
shown as 3 tons, reducing to just 1.1/2 tons at it's maximum 21 ft radius
of lift. ?? Why nothing heavier shown ???

Regardless of that I like this for being so different !!

I wouldn't expect the 6ton version to look particularly different to a 3ton one, The differences would be some incremental changes to the steelwork in the jib and some uprating of the mechanism in the winch. Or perhaps the 3ton one was downrated from six due to the age of the same components.
Growing old, can't avoid it. Growing up, forget it!
My Layout, My Workbench Blog and My Opinions
Top

Normal practice to rate a crane by its maximum, rather than what it can lift at the extremity.
Dave
Top

The model is an exact match to the Severn Valley Railway pictures and it is
described as being a 6 ton crane so I have a theory :-
I believe the weight and lift radius as shown on the back of the ballast box is correct for un-supported operations.
However if the outriggers are correctly in place to stabilize it, the lifting weight can be doubled.

If I find a way to 'lift' the photo showing radius lifting weights I'll add as an enlarged notice segment.

Yesterday was rough down here on the Dorset Coast, at least we live on very high ground so no chance of flooding.
What CAN you do on a day you don't want to go outside, not even to the shed, or garage.
In my case find one of my old Airfix kits, genuine boxed Airfix Cattle Wagons, I have, no, had 3, now down to 2
in stock. Here we have, it will no doubt take me weeks to suitably paint and decal. The roof is still loose for painting.
I feel like making with all the doors open and having someone inside cleaning it out. Can't fit in a running train that
way, but I already have several running cattle wagons. 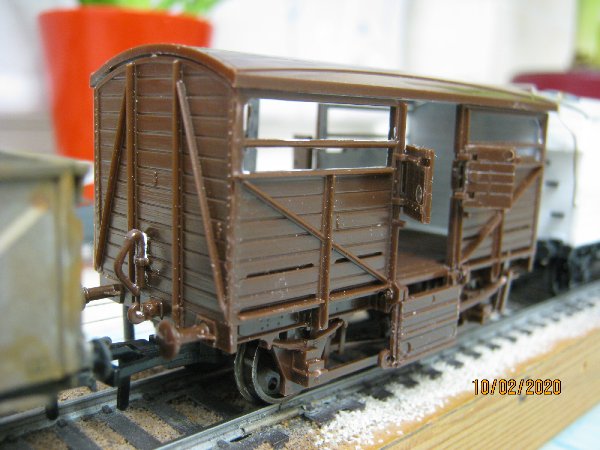 My Romford sprung 3 link couplings have arrived today, so back to my crane.

Had to tidy up a little storm damage in the garden
so no time spent on the three link couplings. 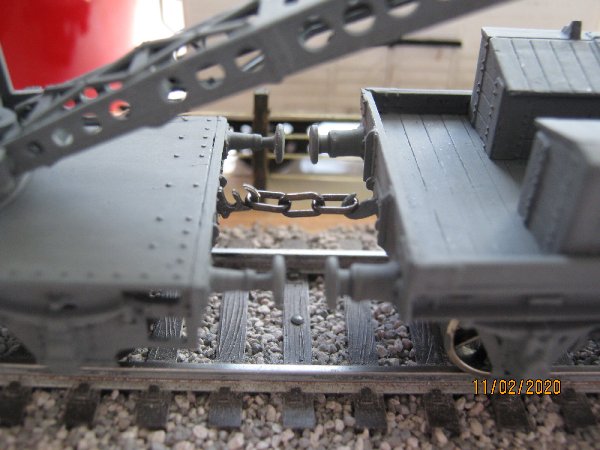 Yes I know one side should have the other 3 links dangling, but this is just
to see if it's worth it - No it isn't for any regularly running train, this fitment
is one of necessity.

It is going to be VERY difficult with my sight and old fumbly hands to get the split pin
through the small hole in the end and compress the spring !!

As close up as this you really do see the current lack of rust on the buffer shanks !!

Dad-1 wrote:it was time to finish something. 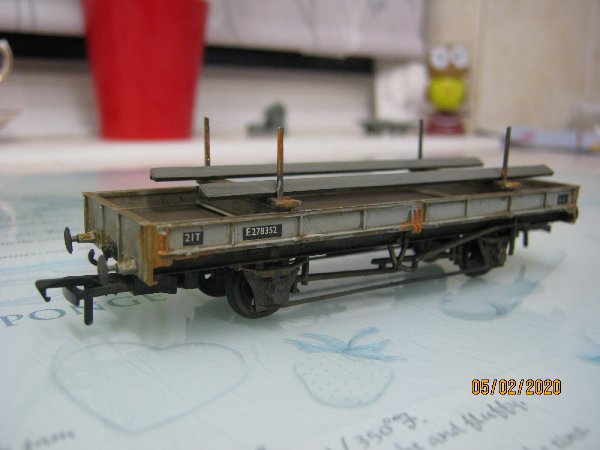 It would appear that this little stunner has found its way up north.

I am very grateful Geoff

Dunno what Middleburgh could have been sending to Port Talbot, but these things often used to get 'Lost'
before TOPS …. the lads just forgot to send it back !! I expect a GWR Bogie Bolster appearing may have
reminded them ?
That's the back story anyway.

O.K everything doesn't go right. I've had and have problems with one of my Airfix Cattle Wagons. It comes down to
lack of care when drilling out the axle boxes for brass bearings. The original Airfix kits had slots in the axle boxes
to take their reduced shaft diameter axle ends. Drilling accurately into a slot means it's very easy to get variations
and while wagon 1 was fine, wagon 2 has one out, which has resulted in more diagonal rock in the rolling chassis than
I like. This means No.2 will have all doors closed and additional weight added in the hope it won't derail easily. Should
it give me problems the answer will be to fit Hornby 3 hole wheels in place of the currently fitted Dapol spoked type.
Those deeper Hornby flanges have their uses !!

All in the paint shop at the moment so no photos until next posting.

Current work bench clogged with the GWR 6 ton crane, awaiting weathering and then
two Airfix cattle wagons. Here they are alongside a Bachmann RTR 'weathered' version
from a set of 3 they did some years ago. I use the Bachmann one as a guide to the overall
colouring, I don't want exact, but near enough to look right, but have individuality. 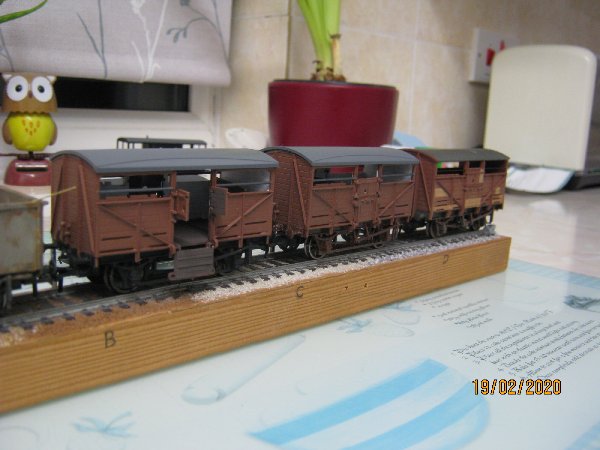 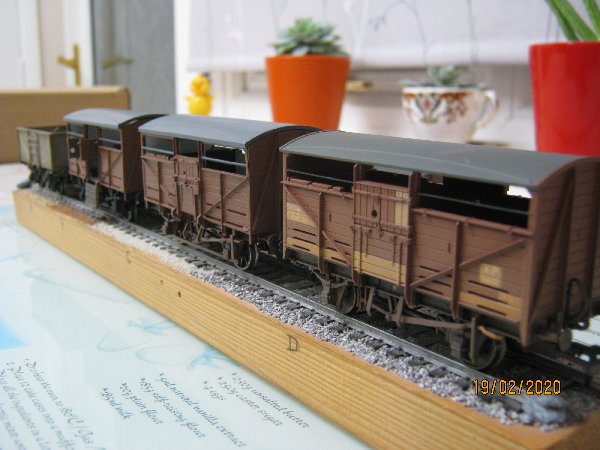 More painting to do on them before I'm finished.
An interesting point for some is that the Bachmann version is too long, where as the Airfix ones
are spot on !! Then they do have their own weaknesses.

Is it always wagons ? No not at all, a long time back I did a few postings of plasticard buildings I
built for various projects.
About 5 years ago I fancied making a building with a curved corner. The difficulty is curving embossed
plastic. I wrapped around a small bottle and poured very hot (Boiling Water) when it was tightly held
down with elastic bands. As often happens it was put aside and all but forgotten.
Move forward 5 years and tidying up my cupboard I came across this little piece of plastic, then double
checked a couple of envelopes one which held most of the building parts. I just fancied a change, so
perfect timing.
Now the actual shell is together, leaving some interesting jobs still to do. Most difficult will be the roof
as I've decided to make a curved roof, this necessitating the whole roof to be made with rafters, battens
and individual tiles !! Windows will be slow due to wanting old fashioned small panes. 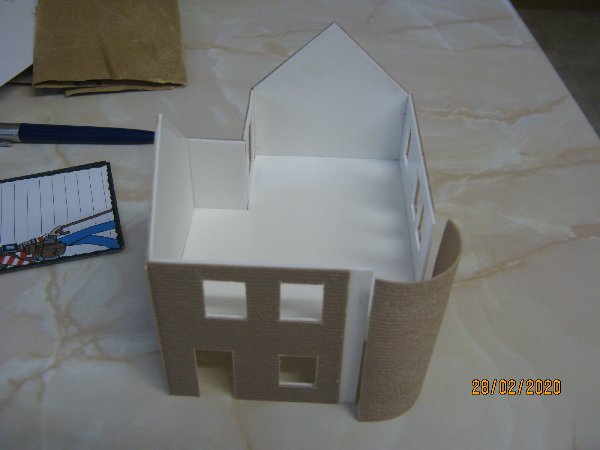 By pure luck my curved plastic exactly fitted the gaps I left each side for attachment.
The large window is because I fancy this being a shop - Acorn Antiques anybody ? 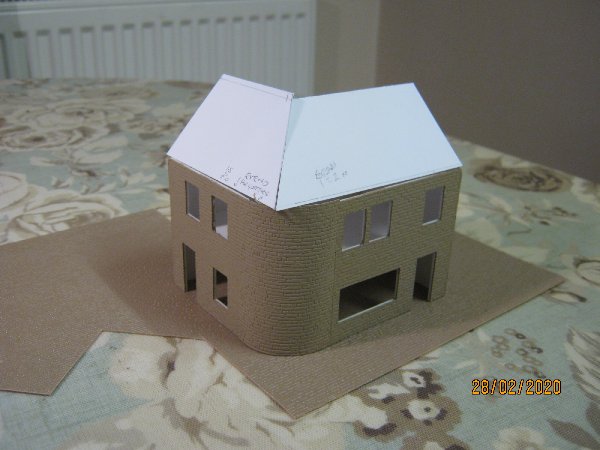 I did seriously think about keeping to straight roofing giving a corner overhang, but didn't like the idea.
I plan a hoist to lift heavy items to the upper floor. 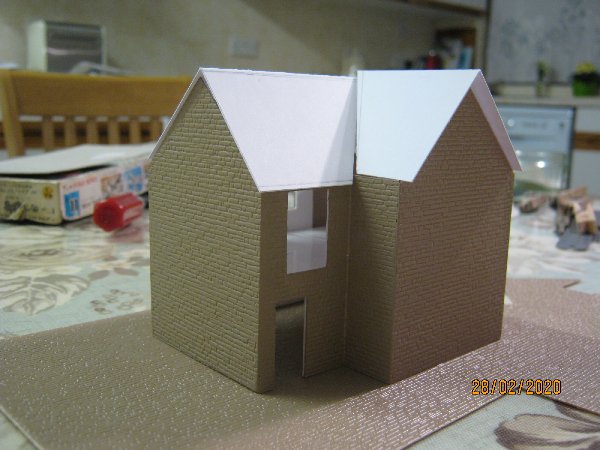 My side street entrance 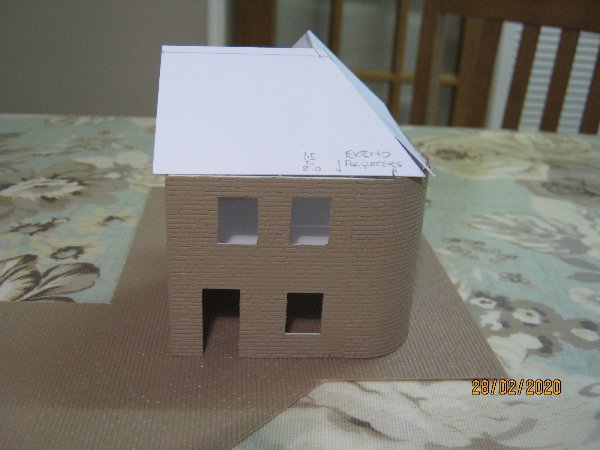 I love the curve of the building. It gives it character.
Top

All but a few days off 3 Months since I last posted anything that's going on
around my Workbench.
It's not that I've been withdrawing for involvement, but I've been spending
all my time working on what is a Club Layout. Although it was intended other
club members would have an input we had the Lock-Down when the layout
was in my garage. As a result I've been making several wagon kits, adding
liveries to others (Unpainted Dapol) and converting to Kadee couplers. I
didn't put in this thread as they were not mine, or for my collection.

I have come back as I have inherited a few wagons that needed a degree of
loving care to bring back from the brink of extinction.
This Keyser plastic kit was very dirty, missing central axle set, damaged and
mostly missing decals which had been put onto unpainted plastic. Missing
and non compatible couplings. Thankfully the actual build wasn't too bad
although there is a considerable diagonal rock from a somewhat less than
square chassis.

Now with metal hooks where there were none, replacement steel wheels at
each end and a central plastic set with the flanges removed. A full set of markings
from the HMRS GWR Wagon sheet, including an end number. 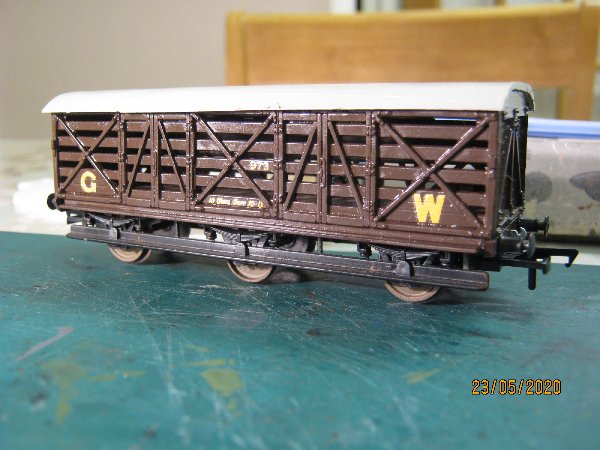 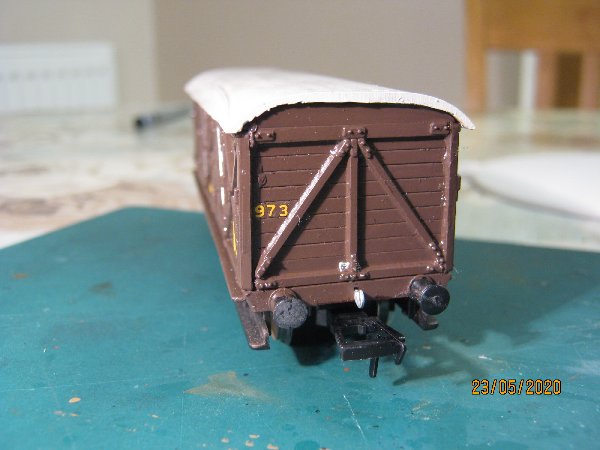 I still have some lower chassis painting as well as a gentle weathering to add,
but it runs well and will reverse push a train around 1st radius curves without
derailing. A really nic e addition to my personal fleet !

Updating the inherited 'K's Low Siphon was enough to start me wagon building again.
Also with the inherited 'stuff' was an old Airfix Lowmac, this was in very good overall
condition, but one buffer head was partially broken off. That was easy enough to patch
with a scrap of plasticard, sand to shape and paint. 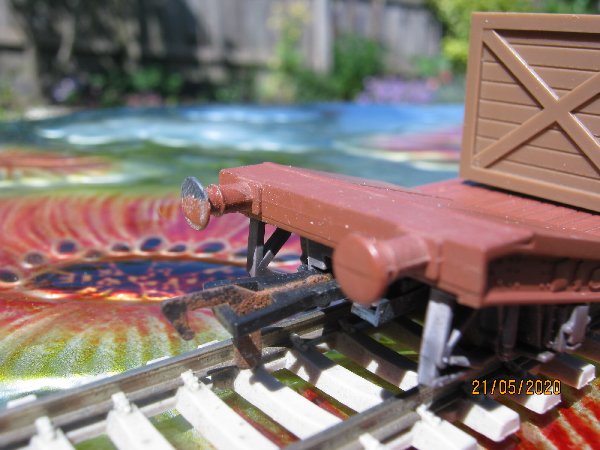 I have decided I can't live with the wide plastic wheels and will replace from my stock
of small metal tyred lowmac wheels - more on that to follow.

My choice of wagon to recommence the wagon works construction programmes is the
Cambrian Kits C48 20 ton Loriot, you see so few low floor wagons it makes them something
slightly different. 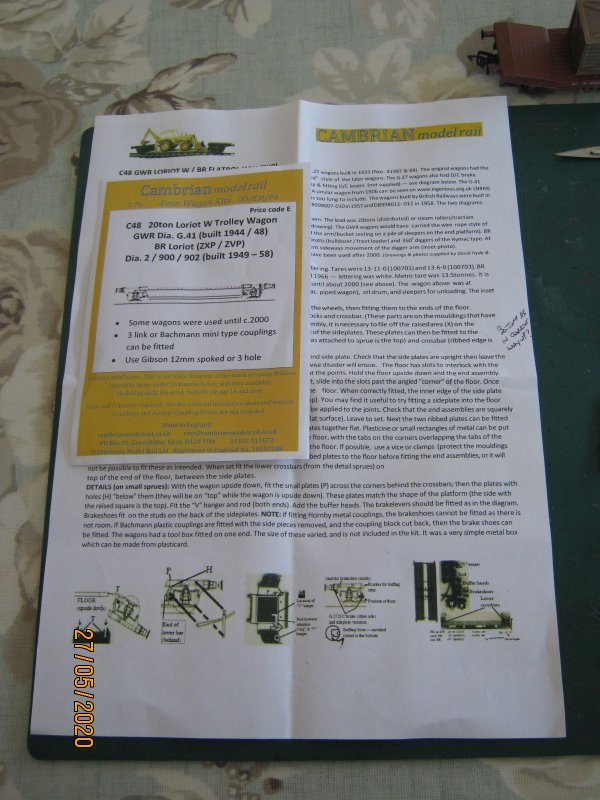 As with most Cambrian kits the instructions are far from clear, with very small and poorly
explained pictures. The contents are a floor with two identical sets of sprues, one sprue
with mostly the components to make end sub-frames that have the axles & wheels. 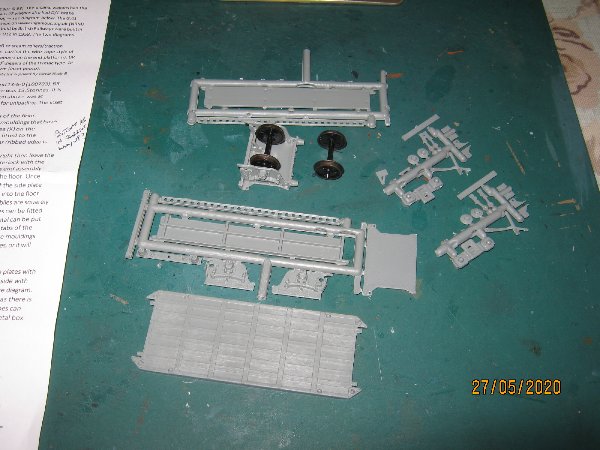 They recommend using Alan Gibson wheels, in this case they are undoubtedly the correct
thing to use. I would normally fit Hornby wheel sets as they have deeper flanges that aid
running reliability, particularly if you end up with a less than perfectly flat chassis. The
actual rolling sizes are so near as to not present problems, but as can be seen here the
smaller flange only just clears the brake rod that fits into the 'V' hanger of a completed
sub-frame. 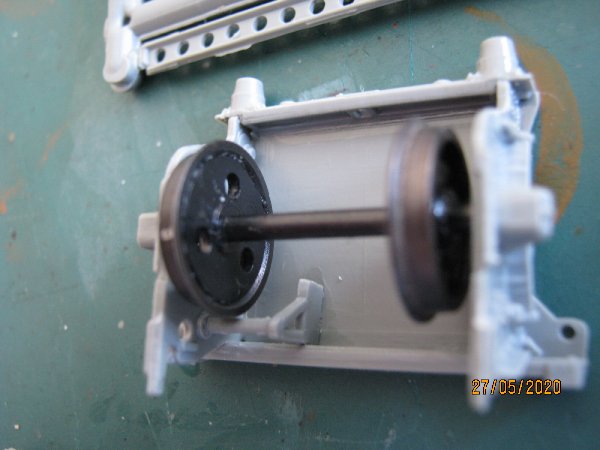 A little more done to the Airfix 'EU' Lowmac.
The wheels have been changed, a comparison :- 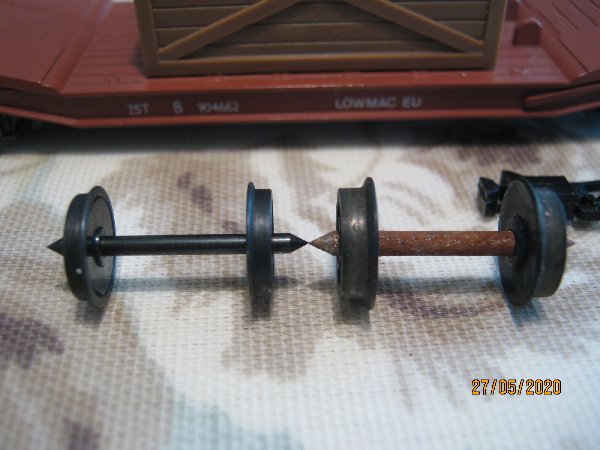 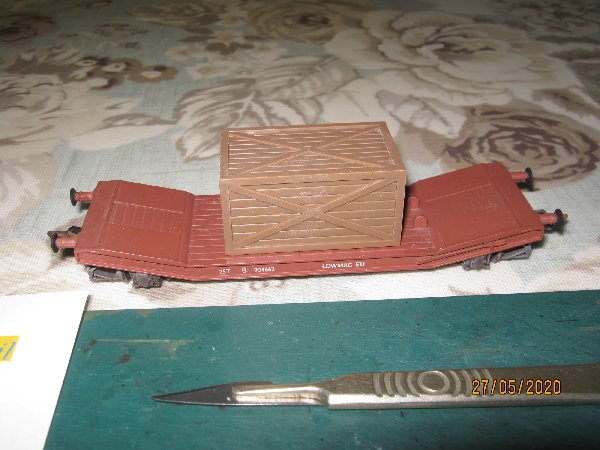 Basically a very nice 'Historic' wagon, but I think a 'Tarp' over the box would help. I'm
keeping the box though as it easily holds several old bolts as the weight improves running
when pulling a heavy train.

Just like those annoying TV dramas that switch back & forth time wise I switch kit builds.
This time back to the Cambrian Loriot. So far apart from poor illustrations in the instructions which could themselves
be clearer it is making up easily into a more than average interesting wagon type.

This would be very light without suitable ballasting. You can hide some thin strips of sheet lead into the voids of the
under-floor part. It MUST leave the ribs clear to stick to the floor. 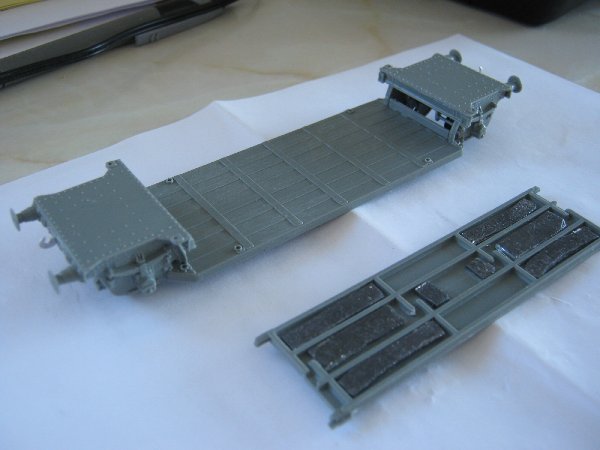 A regular problem with Cambrian is that the brake parts seem to be spaced for EM as with '00' the brakes are well
outside the tyres. I fixed to small spacers made from plastic channel. 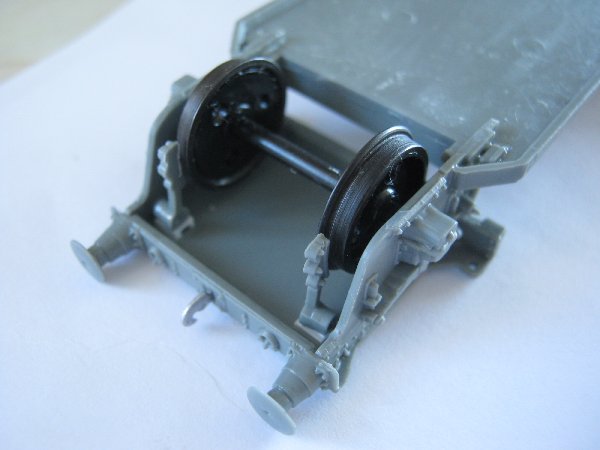 Tightly hold the under-floor when gluing in, they warn to be generous when attaching and clamp if possible. 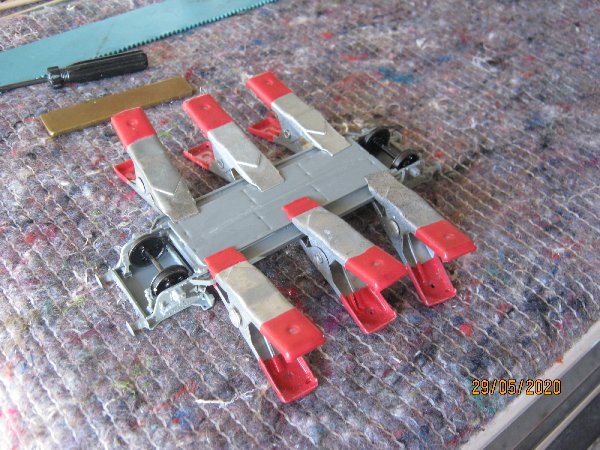 Apart from fully understanding the build process from rather poor illustrations and less than perfect description
this makes easily into an interesting BR engineers fleet wagon. I'm now just about at fixing couplings and then
adding some paint !!