Not in the same league as Jim S-W, but I'm happy and that is one of the first rules of modelling.

Today, raining, dull, if it wasn't so warm it would be more like November.
I brought the shunting layout in for a few little jobs that were outstanding.
I decided to take a photo of the Sleeper Wagon by my platform, resplendent
it overall black. I have to paint the underside, but from this view it looks done.

I'll probably start decal hunting tomorrow as like the Loriot build a few pages back
I don't have a specific decal sheet and will make up from bits & pieces. 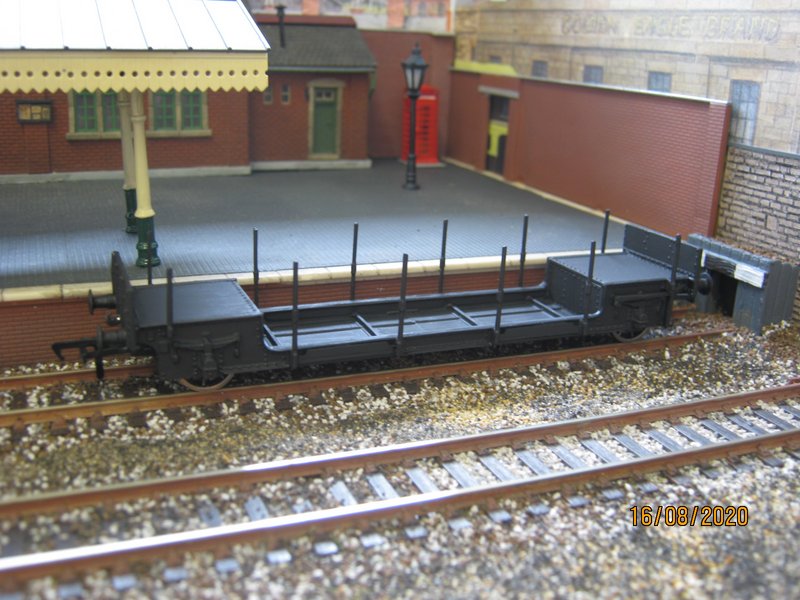 Nice shot Geoff, is that the phone box you were searching for the other day?
Growing old, can't avoid it. Growing up, forget it!
My Layout, My Workbench Blog and My Opinions
Top

Yes it was a search for a Hornby Skaledale, because they were tough and looked good
However on Ebay the Hornby versions were going for well above £10 each.

I asked all the club members, as it's a club layout and Shirley, our lady member offered
me a made up Scalescenes version which I accepted. They are somewhat smaller than
the Hornby ones, but come with no glazing which I added. It was all red, unless you add
the small white panel yourself. I made from fine cut white decal film, but no way could
I add the text 'TELEPHONE. The one small advantage is that it has the black 'desk'.
I'm quite pleased with the final look.

Shirley also found a Langley cat in her stash that will be sitting on a packing case I still
have to make.

Back in 2016, I was shown some '4ground' packing cases made by my buddy Derek.
I was so impressed that I bought a pack, but mine just didn't go together correctly.
Having Derek's samples to look at I could see that the material was too thick on mine.
I complained and yes a small number of packs had gone out using a thicker material.
The precision of these laser cut parts is admirable, a brilliant yard/platform accessory.

The makers replaced my faulty pack with 2 new ones which then got lost in the loft
stash, the moment had gone. I decided I wanted some of these to go on our Green Frog
Brewery layout, surprisingly easy to find and although rather fiddly to make are everything
I remember. Just brilliant finished packing cases.

Here we have the iffy Langley cat sitting on one. 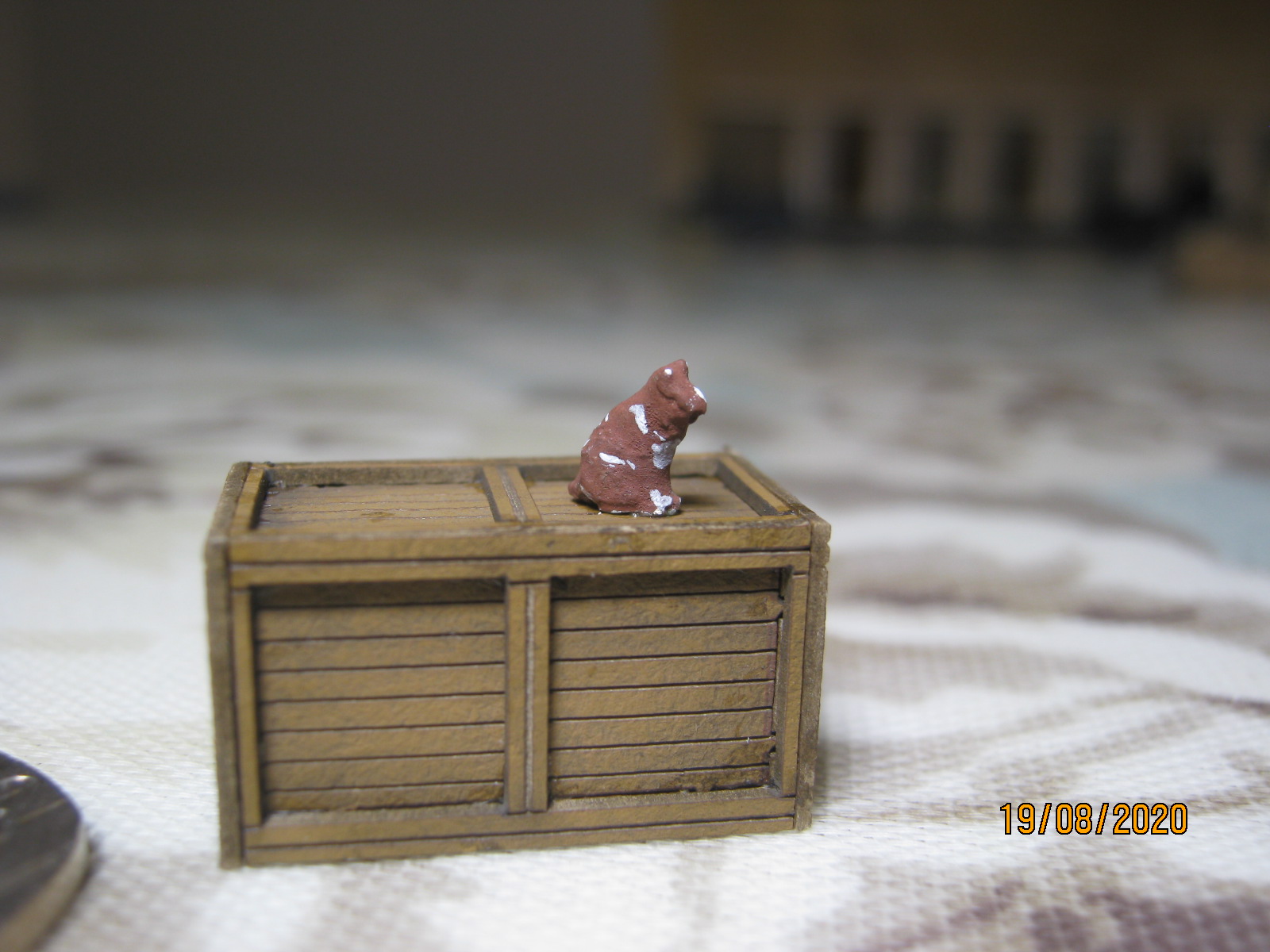 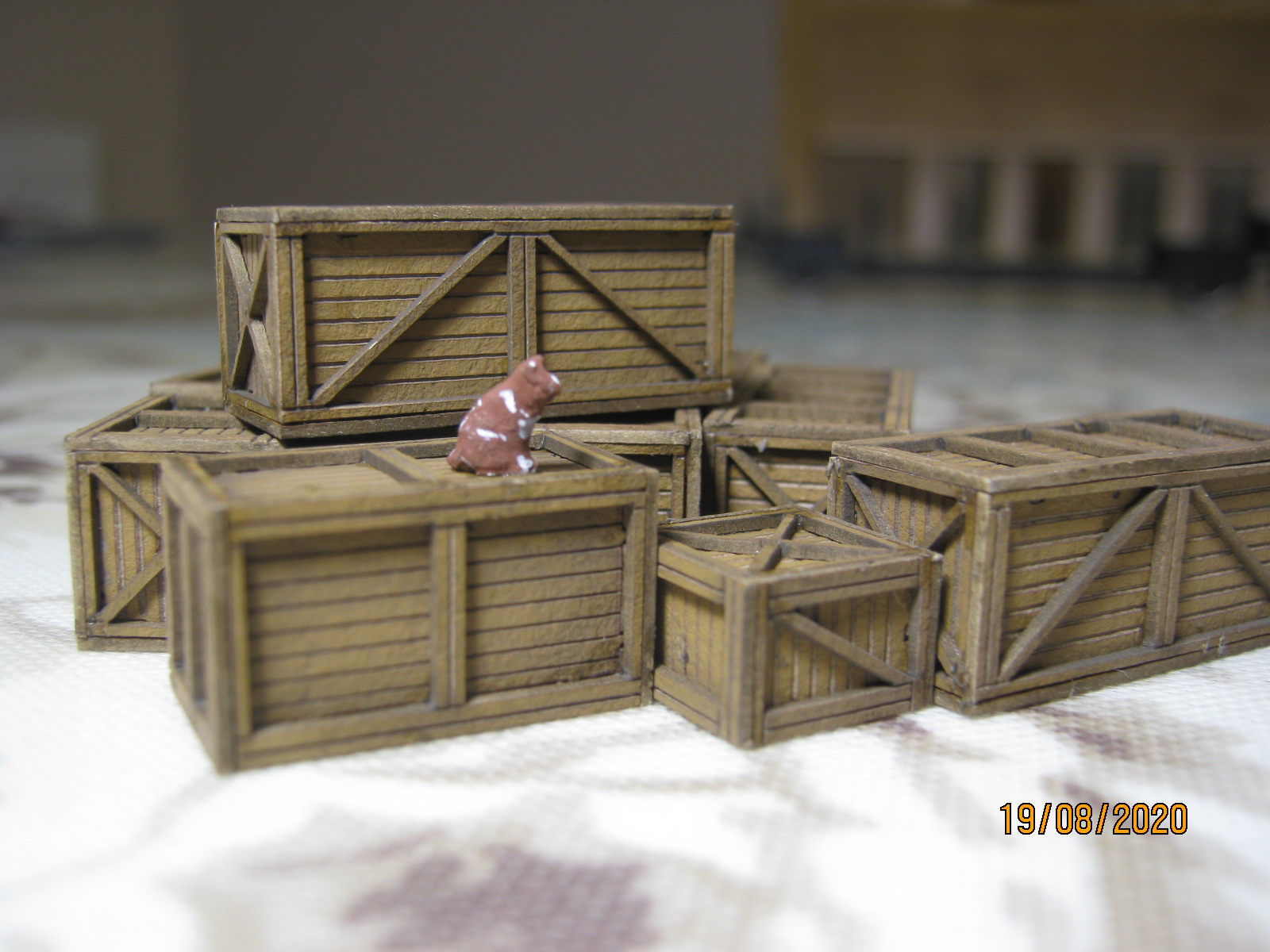 Having found a source for decals to finish the Sleeper Wagon I've sent off for them. In the meantime I've started another
Cambrian Kits Wagon, their Dogfish ballast wagon, the decals for which are also on the sheet I've ordered.
The contents are limited, helped by the main hopper body being a single piece. 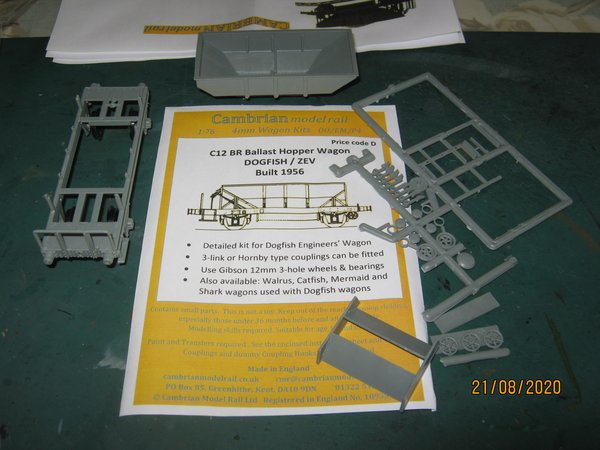 You need to take great care when removing parts from the sprues and cleaning off flash. There are times when it's
difficult to work out what's flash, from profiled edges needed during construction. The footplates/platforms have a
ridge on the inside of the solebars to rest on, yet have a thinned edge all around their joining edges making it look
like it may need removing, this particularly noticeable on the thin tie bar. DO NOT degrade as these need to be fixed
with the upper surface matching the solebar tops. 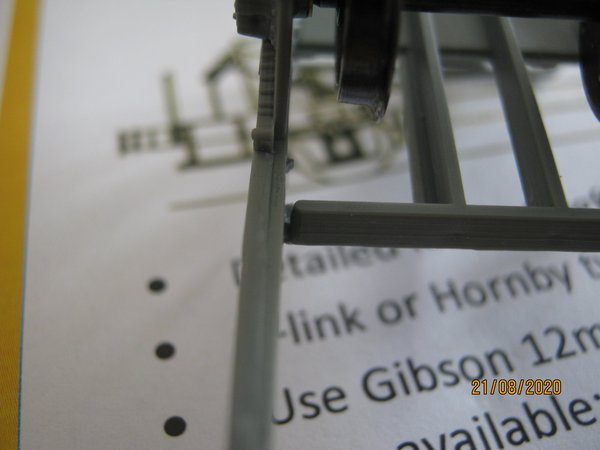 Getting two headstocks, two solebars and two footplate/platforms stuck together and in alignment can be a difficult
job. They suggest building this and adding wheel sets later. I believe that could pull some joints apart, so I slipped my
wheel sets in, but used an elastic band around all 4 axleboxes to hold in place. This I think helps getting all the other
parts in place while the edges are all gooey from liquid polly. Using line of sight down over the two axles you can see
any chassis twist and duly hold in place until the adhesives have set enough not to move any more. 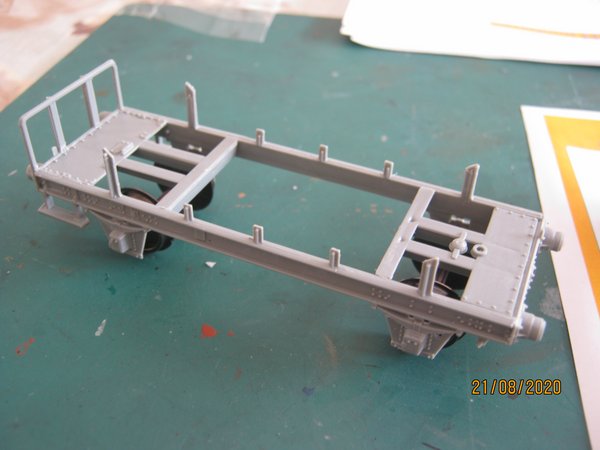 My resulting chassis is flat, no diagonal rock at all, all ready for the next steps. I was confused by the underside chute
which is made up from 4 pieces. In a scrap diagram it shows all 4 part letters, DON't follow that !! Alongside the text
tells you to use two other parts from the same small sprue ??? the two mentioned on the scrap drawing are not used
in this kit at all.

It seems the main chassis of both the Catfish & Dogfish ballast wagons are virtually the same,
but the Dogfish has an additional discharge chute with two additional control wheels.
Here you see the differences between the two Cambrian versions. 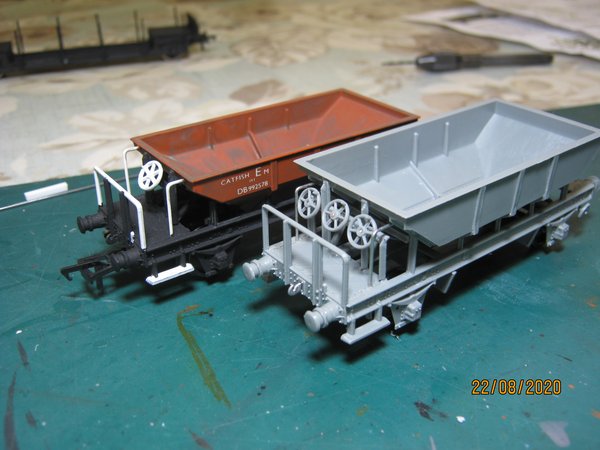 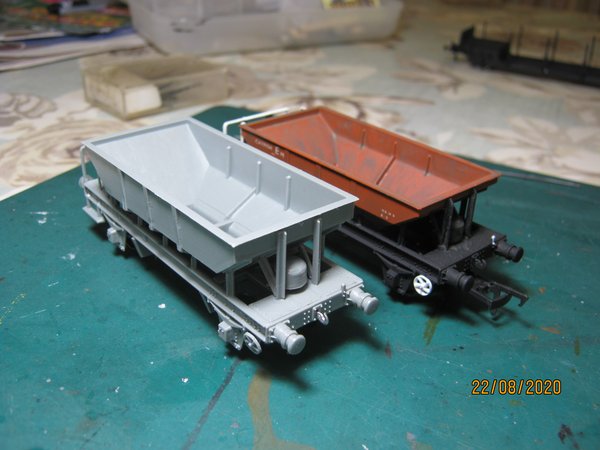 In that second picture the brake operating wheel on the new wagon had sagged, still rather
damp glue when photographed. Now safely moved up !!

Painting to begin, my need for an early period wagon offers me the choice of Black !! The Catfish
alongside has a 'Gulf Red' hopper dating from a slightly later period (Early 1960's)
Now awaiting decals.

A week off, Not quite, but other things need doing around the house.
So we return to Engineers Wagons, still not finished as they need the odd decal adding and then
weathering. I was persuaded to get a Cambridge Custom Transfers decal sheet, these are not cheap,
although getting small individual Model Master, or Fox decals to cover half a dozen Cambrian Kits will
cost you much more and probably have simplified markings. Better to invest if you're going to do several
Cambrian Kits.

Trying to identify what and where the early BR markings were placed is difficult. I settled on an arrangement,
drew it on the instructions and have cut & matched my decals to one particular photograph although not matched
the number because I'm limited to what the decal sheet offers.

I also found a build error on the Dogfish. The instructions were vague and I later found the chute I had made was
one specifically for the SR 3rd rail environment. Rather than try to pull apart what I'd already made I cut two chute
parts from plasticard and mated to the supplied ends

Here it is of today. 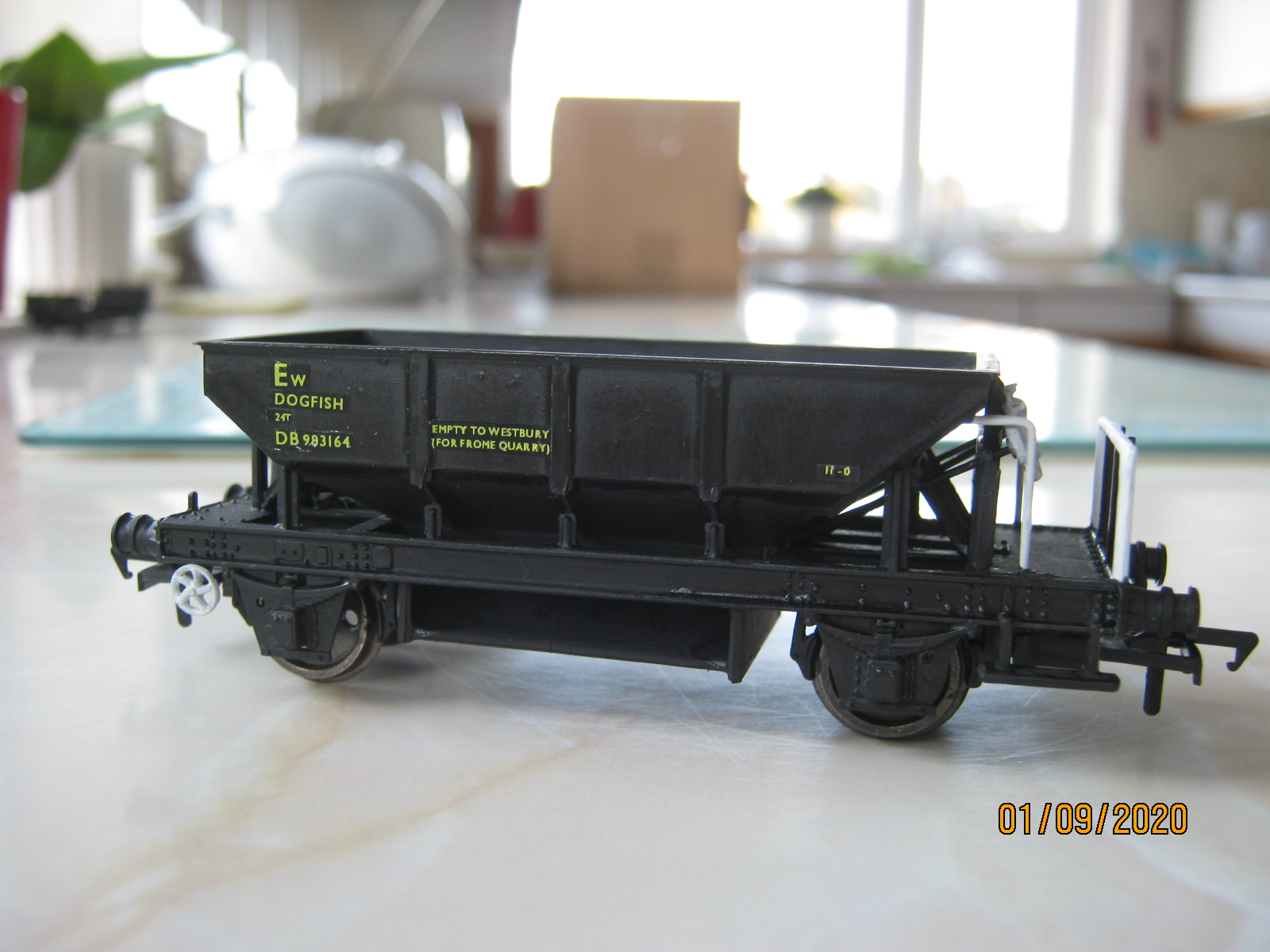 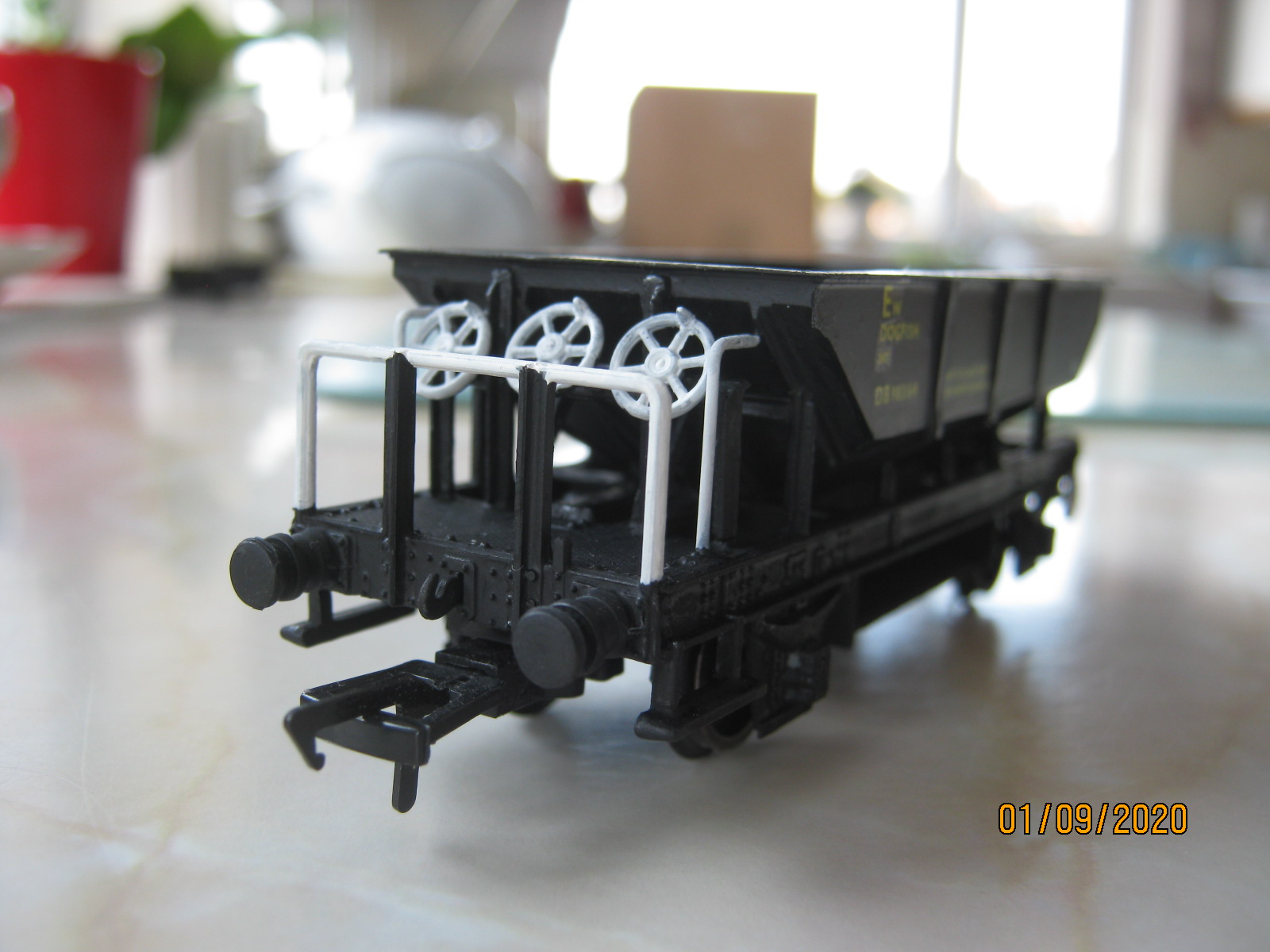 Mostly a tidy up and weathering to finish, well worth the effort. So pleased I may make another due to the decal sheet
offering two sets for the Dogfish !!

On the same decal sheet I had two sets for the BR version of the GWR chaired sleeper wagon. Here there is a problem
they give one set in white and the other in correct yellow. In truth I needed the later wagon number, but while the
instructions said they should be yellow this was the white one. ! Used the earlier buffer fitment number, as it's on the
end you have difficulty reading it !! It's much smaller than appears here. I had one of the weight decals come off onto my hand, not leaving long enough to dry before handling. The decal was
lifted off my finger, floated on a bubble of water, coaxed onto the glue side of some backing paper and re-applied.
Very few decals would ever survive that, but this one did. The surrounding panel appearance is just reflection and will
vanish when weathered. 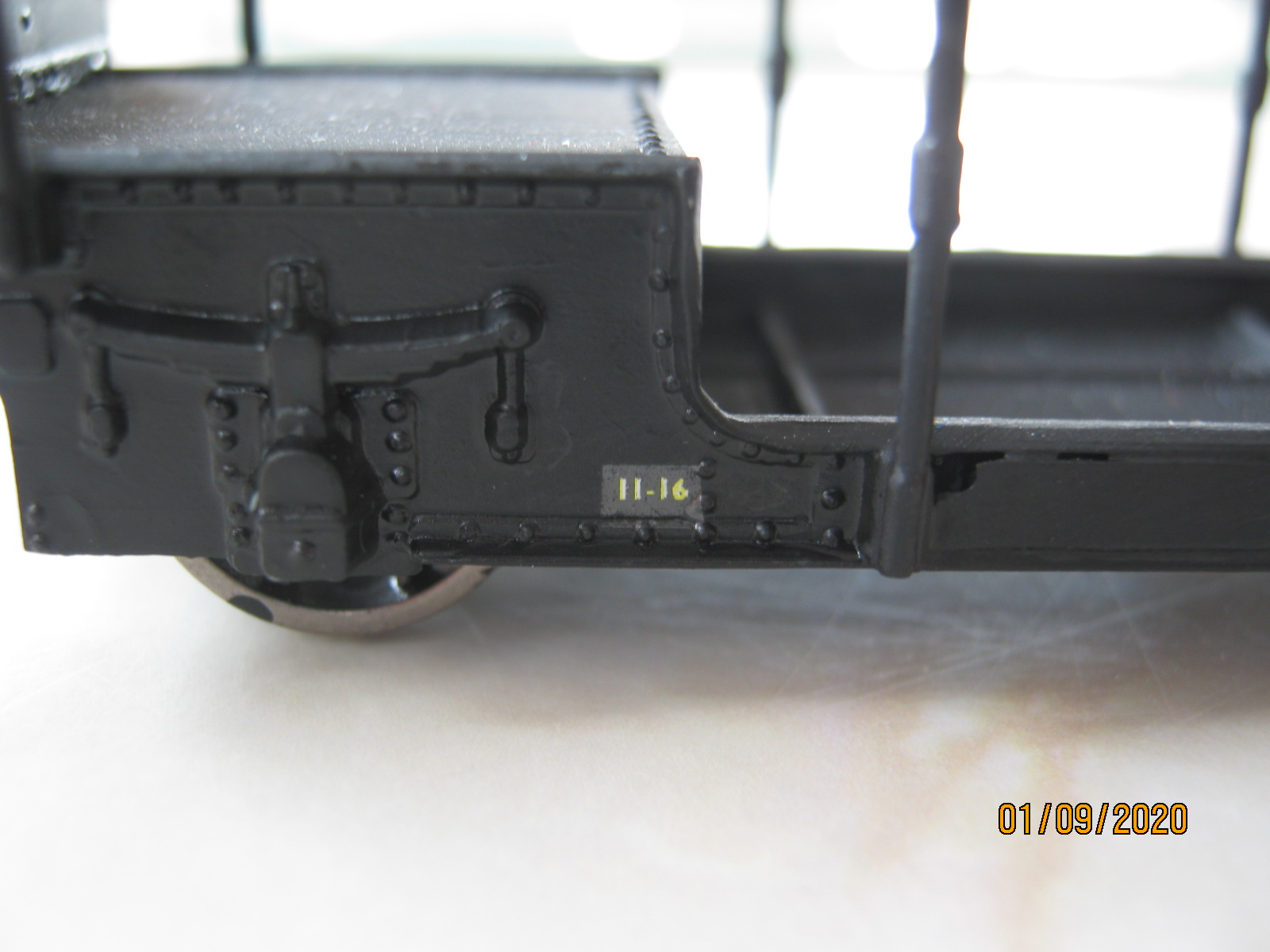 Now I must rescue my 4 'Mermaids' from the loft as this decal sheet has all I need.

Off to Cornwall at the end of this week, I need to collect some more Cornish wind-blown shell sand that I use in so
many scenic jobs.

Weathering will make so much difference - A big question mark ?
Do I weather and run as empty, or do I load up with ballast and park up full !!

Nice tidy work Geoff, will look even better once the weathering is complete.
Top

Dad-1 wrote:Off to Cornwall at the end of this week, I need to collect some more Cornish wind-blown shell sand that I use in so
many scenic jobs.

I'll be there next week. Thanks for reminding me.

Back from my break away.
There must be many staycation people around it was busy, couldn't get any parking near Port Issac,
but being in Polzeath we spent much of our time walking the coastal paths.

I took 3 wagon kits with me, only found time to work on one. A VERY old Ratio GWR Open 'C' that was
inherited with loads of other stuff. It turns out to be quite incomplete and of course with no instructions.
The main body went together well and I then met the usual Ratio kit problem. These were moulded with
plastic wheel sets included, these had by todays standard, longer axles.
I found I didn't have any spoked wheels and used a 3 hole set to try and fit in the brass bearings. These
needed to be right on the edge I decided to just leave modelling until I got home !!

I have since fitted plasticard horseshoe washers around the bearings and therefore have a rough rolling
chassis. I've been in contact with a friend who is certain he has a set of instructions and will halt this
until they are received. There are so many parts missing, no DC III brake levers, no buffers, no hooks
and only some of the brake fittings, like 1 'V' hanger, but I need 4 !!

So after the frustration of that ?

I'm going to start another VERY old Ratio kit. The postage stamp on the outer packet from Ratio at
Chorleywood is a Pre-Decimal definitive 6d stamp !! That means this kit is at least 49 years old. Who
can remember a Ratio Coke Wagon kit ?

Is there something I've missed ?

My latest Ratio kit build is Kit No. 1501 from their 'New' series.
Here are the instructions, yes quite basic. First though we have the original packet with it's pre decimal currency
postage stamp dating the kit to at least 49 years ago ! 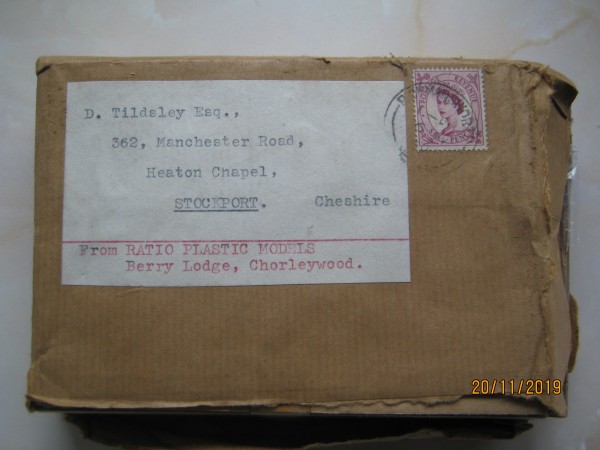 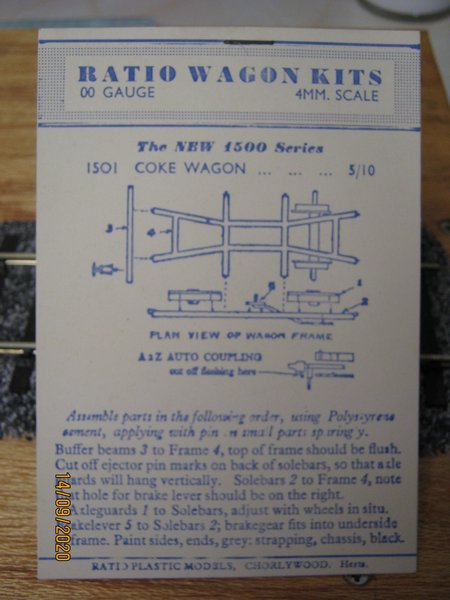 The contents quite reasonable for something moulded 50 years ago. A separate chassis onto which the body fits. 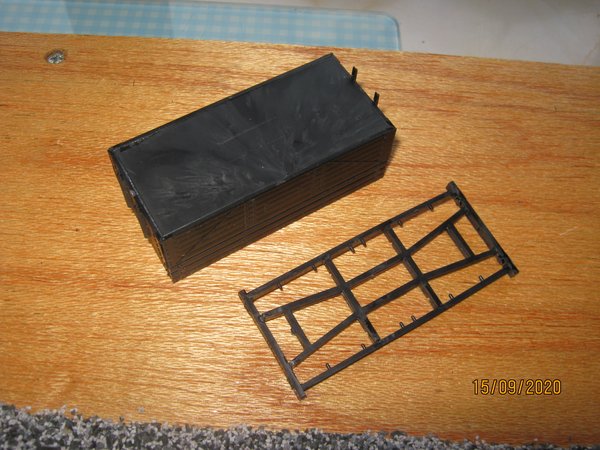 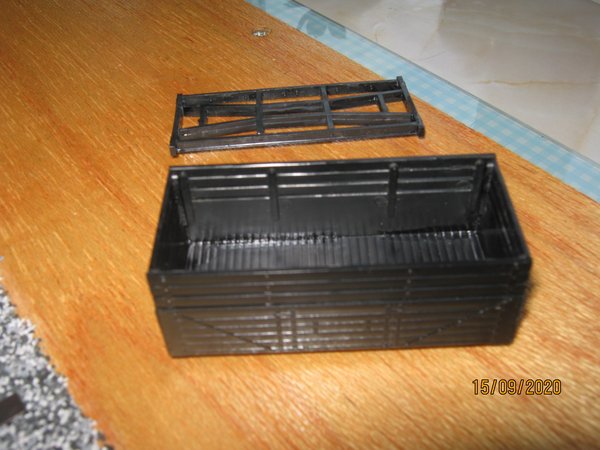 I thought it would be a good idea to check out any originals. Here I drew a blank, I can't find any reference to
a 5 plank wagon with coke rails. So is this a fictitious model ? That was quite common, yet Ratio were trying to
set a higher standard. I mean 5/10, or about 29 pence !
Now could this doubt over prototypical form be the reason why this is not in the recent Ratio product ranges ?

Tonight some paint going on, to try and hide it's doubtful heritage I shall probably try doing my own decals for
a small west country town's gas works from which coke was a by product.

Just the excuse I need to drag out the RM back numbers from around 1970, see if there's any Ratio adverts that might throw some light on the 1500 series, or if it never got further than 1501!
Growing old, can't avoid it. Growing up, forget it!
My Layout, My Workbench Blog and My Opinions
Top

Bufferstop wrote:Just the excuse I need to drag out the RM back numbers from around 1970, see if there's any Ratio adverts that might throw some light on the 1500 series, or if it never got further than 1501!

Cant be certain but came across a reply to a post on here about lost ratio rolling stock kits where 'mahoganydog' mentions finding a "1502 24T Iron Ore Wagon" which is described as similar to Bachmann's 37-508 in type (whatever that is?)

Alex
"I love the way you call it Art, When you never even use your Heart, and I just wanna tear you Apart"
Top
Post Reply
1269 posts