I just can't resist starting another kit when I have a few spare minutes.
Getting paint & decals out is long winded, easier to stick bits together.

As a result I have 2 x Parkside PC66 LNER/BR Lowfit wagons already into
the painting stage. I thought it may be interesting for some to see how
I attach the Parkside PA34 dove-tail mounting blocks. 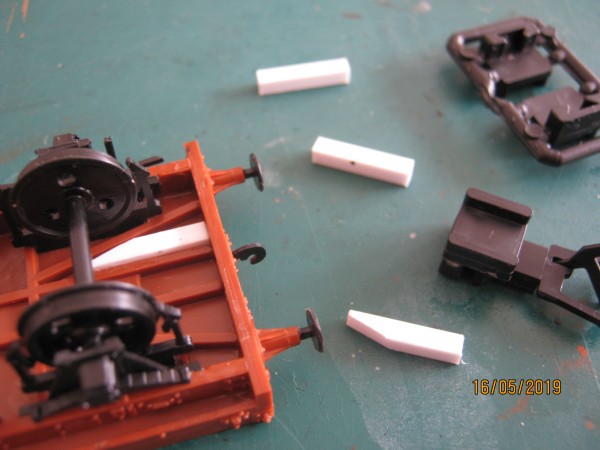 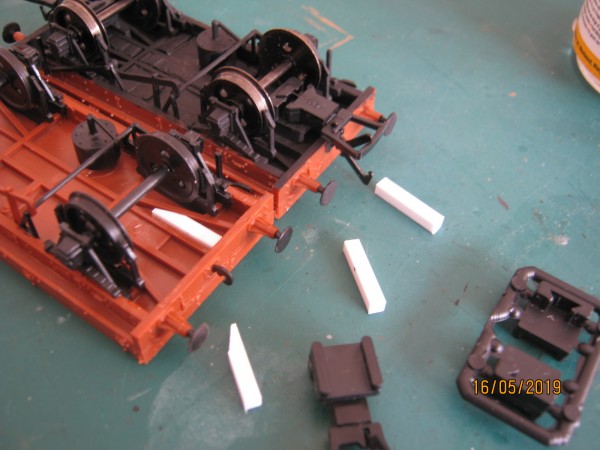 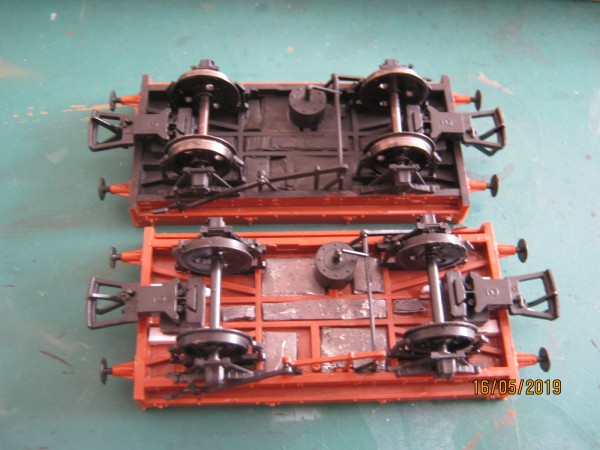 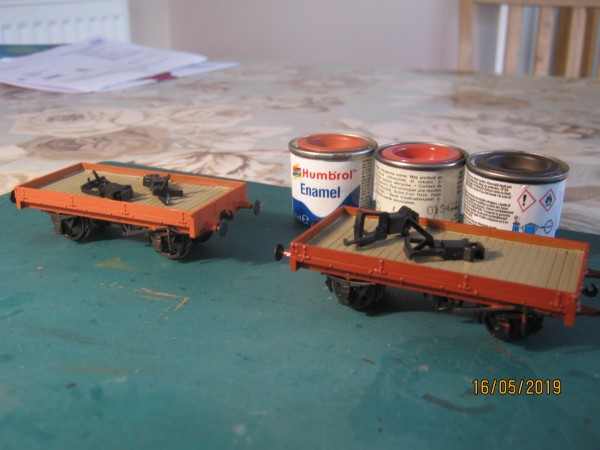 More painting needed. The brighter one to be LNER, duller a BR with an 'E'
prefix number.
I have some lead sheet that I cut up to put into chassis voids. As can be seen
in the black painted undersides version it becomes difficult to see, impossible
when on the rails.
These are VERY light, even with the lead are much lighter than the Bachmann RTR.
I wish I had more books ...... The Bachmann releases have steel channel solebars,
but my information says most were built with wooden solebars as per the Parkside
kit. ?????????

Back in November I was working on some kits for my club's new layout and I really
liked the louvered ventilation shutters of the Mink 'A'. I decide I'd make one, or more,
for myself.
Tonight I started, and while Lysander gets motorcycle alloy wheel type of balance weights
for ballasting light wagon kits, I find money cheaper !! Here you see the kit contents and
the part constructed van body with 2 x two pence pieces glued in with gel superglue. 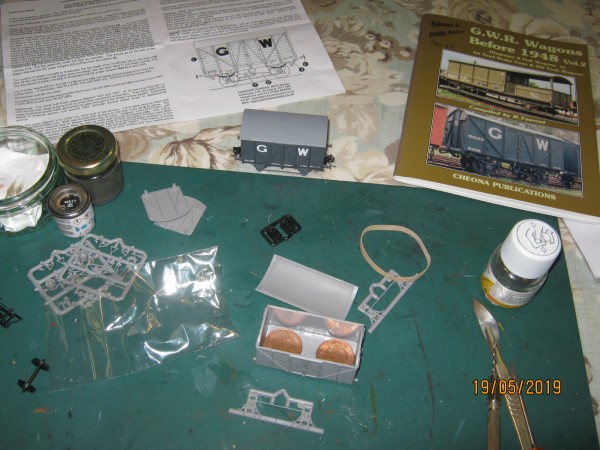 There are several variations you can make from this Parkside kit and this left me with a quandary.
Should I believe the kit instructions, or go by a modern preservation picture of an unfitted wagon.
The kit says the hand-brake only variants didn't have the tie bar between 'W' irons, yet this publication
shows an unfitted with tie bar ? Easier to leave in I think ? 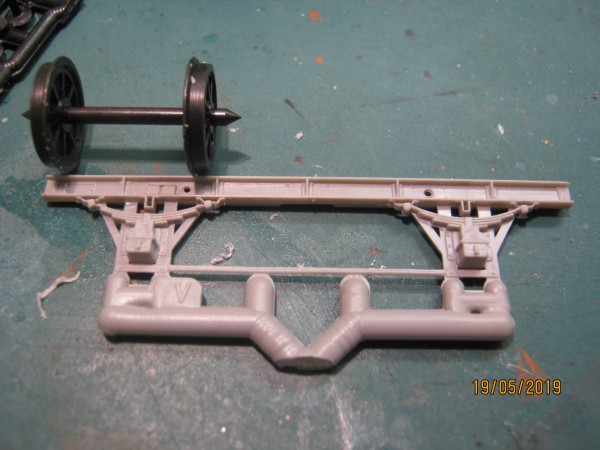 I have 2 kits, but the more I get involved I can see good reasons for having around 4 of them !!

I was counting wagons going past as I drifted off to sleep last night.
I don't think I can resist having a couple more of these Mink 'A' kits
It's the range of options that's got me hooked, not inhaling glue fumes.

You have options V12, V14, V16, early versions with the louvre shutters,
but these were later converted to the two bonnet vents. They also came
as fitted, or hand braked only. Then the buffers changed in production
and later conversions.
I run my layout in two epochs, either GWR/LMS, or early BR. While GWR
needs dark greys, best all very slightly different, you need either bauxite
for fitted and grey for unfitted for any lasting into early BR days.

O.K. What do you make ?? The clubs GWR variant I made (picture about 4
pages back) was a V12 louvred vents and fitted brakes. My initial build from
last evening will be V12 louvred vents unfitted. My second current kit will be
GWR, but a V14 with bonnet vents and fitted. I do fancy being able to run one
in a BR train, leading to a requirement for 2 more, one fitted and one unfitted.

MMMmmm 2 more Mink 'A' ordered today.
A lost cause, anyway I've all but finished the two Lowfits, all they
need is tidying up and weathering. 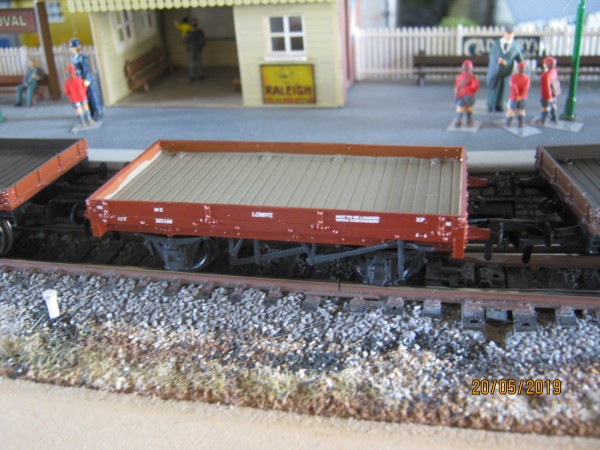 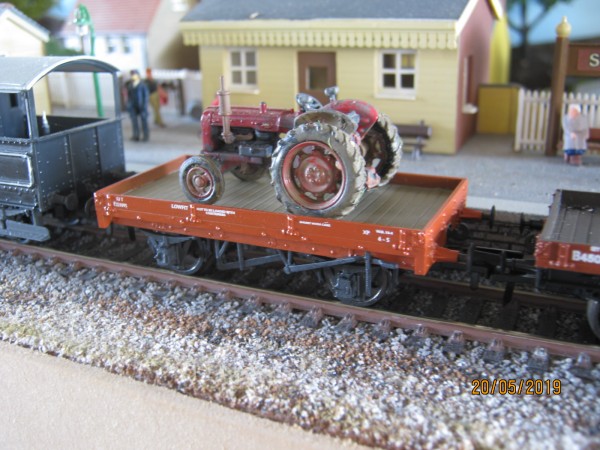 One NE, the other BR (E). I did unravell the differences, the Parkside kit was a true LNER
design and build, while the Bachmann version is a BR production hence the change from
wooden solebars to steel. I now have 6 of these, 4 Bachmann and these two kit versions.

The ModelMaster decal sheet is now included with Peco releases of this kit.
I thought the size was slightly small, but I wasn't going to see what else may
be here, made as supplied. 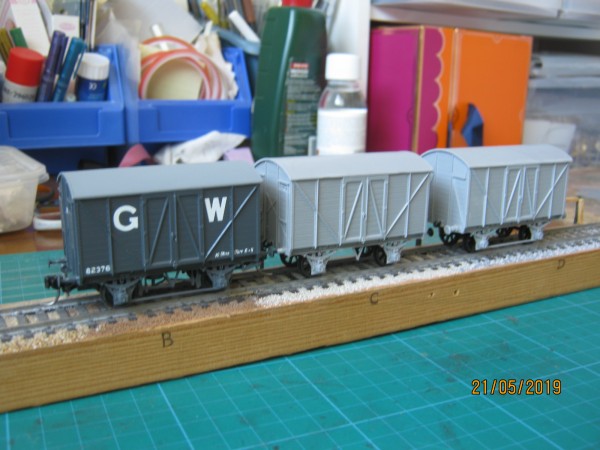 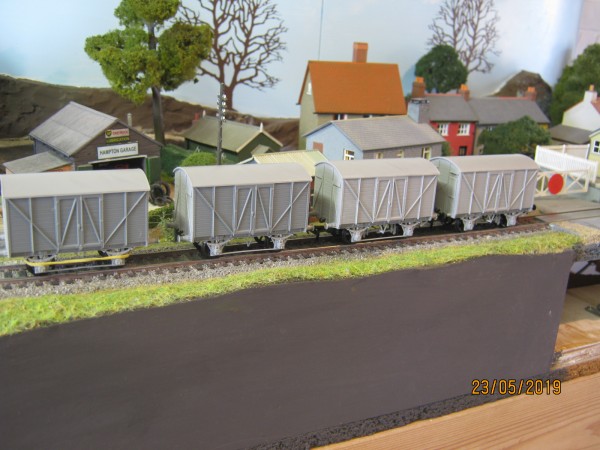 Now I don't know if it was a packing mistake, or Peco are changing what's included in this kit,
but the last 2 had one small sprue missing 'Pt.17' on the instruction sheet. This small sprue
has the buffer heads for the early Louvre Vent version of this kit, plus 2 hooks and a couple
of drop side door stops that are obviously for use in some other kit.
While the new packaging has a small ModelMaster decal sheet now included the wording on that
had me anxious as it clearly states "PC84 Ex GWR Mink, Mink 'A' V12, V14, V16" and only includes
decals for these vans in BR use

I wanted these as GWR first and foremost !! In particular the early louvred vent shutters of V12.
I have emailed Peco and await their comment. It's of no immediate concern as the two I wanted
with the Louvre end vents have already been made for my earlier kits. In the previous packaging
you have 4 hooks, 2 on the small missing sprue and 2 on the other main gray sprues. 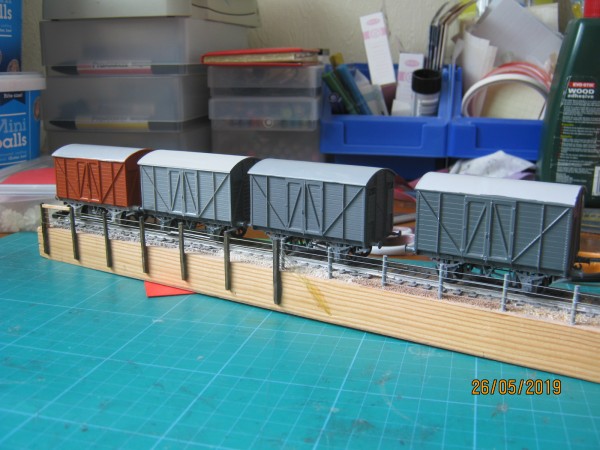 Progress, so slow while waiting for paints to dry hard enough for adding a Klear seal before
putting decals on.
A decision has been made regarding the lightest grey (unpainted plastic) version. It'll have
to be GWR grey, just the one in Bauxite for BR livery.

Very nice. I love to see things being made.

Geoff your workbench thread is really interesting with some excellent modelling skills throughout. It’s taken me a bit of time to catch up but I’m up to speed now.

I think you missed the Irony/Humour in the comment

That was the challenge

At least one is now 'dressed'.
An unfitted V12 with the slightly later & smaller GW side markings. 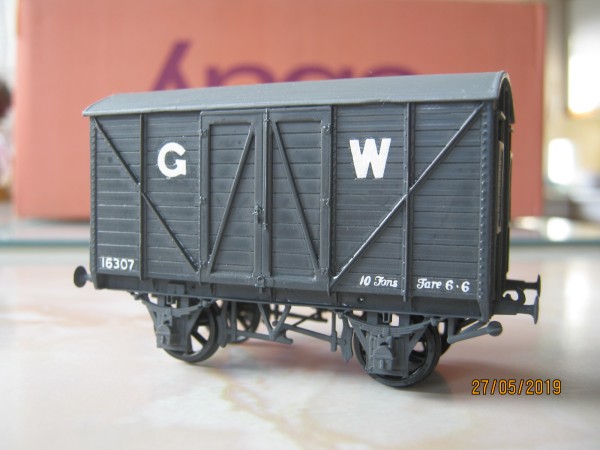 This is a cheat as I've not yet added the wagon end numbers.
HMRS Decals, not difficult to put on with the exception of the dot in the tare weight !!

Now all but weathering, a V14 with fitted brakes.
Again with the smaller GW side markings, but no end numbers for this van 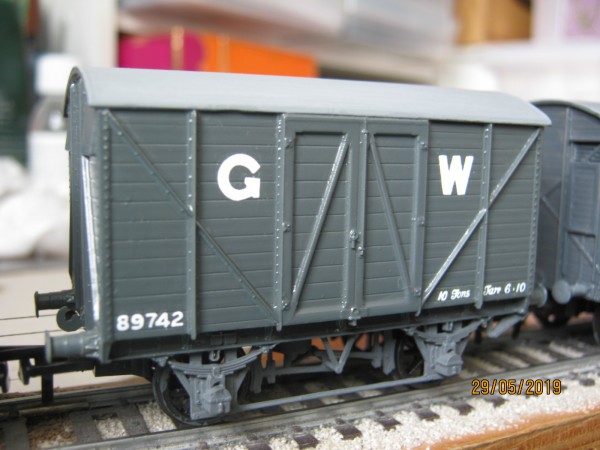 Note the extra tare weight from vacuum brakes and piping as well as the
tie bar between W irons.

Very neat work Geoff. you've probably mentioned this before, but what weight are your vans?