Ahh yes, earlier I added some stuff to the Cambrian Kits GWR permanent way wagon,
a load of spoil from a little job outside St Oval.
Typical me I still have to weather the outside !! 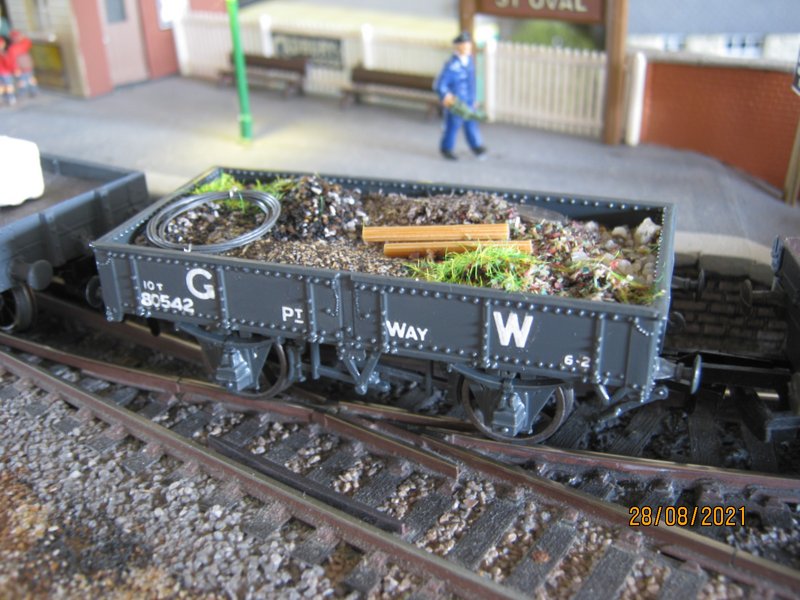 Over the previous page some of my build of this Peco Parkside 13 ton BR coal hopper build is shewn
Well here it is running towards the head of a train with 33 other wagons behind it.
Asking a pertinent question - Do you need to add ballast weight ???
In many cases No
In some cases Yes
Your decision.

Weathered, not quite what I was hoping for, but these are still
clean when compared to Paul Bartlett's photographs. 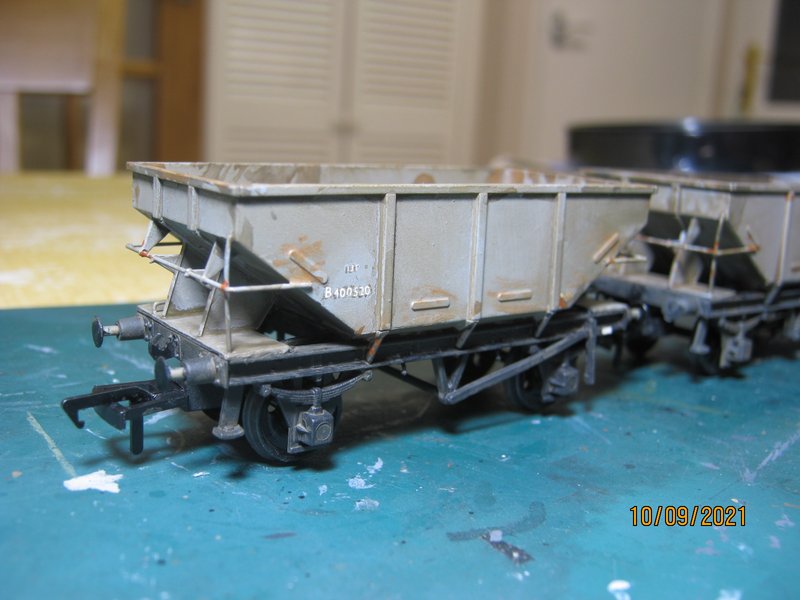 I wonder when the 8 on back order will arrive ?

Quite a long break.
Well 4 of my out standing orders for Parkside PC90 hoppers have arrived.
Two have been made up already, weighing in at 11.56 & 11.63 grams. Very light
even by my standards, although they have been running around my St Oval layout
attached with 13 wagons behind them. 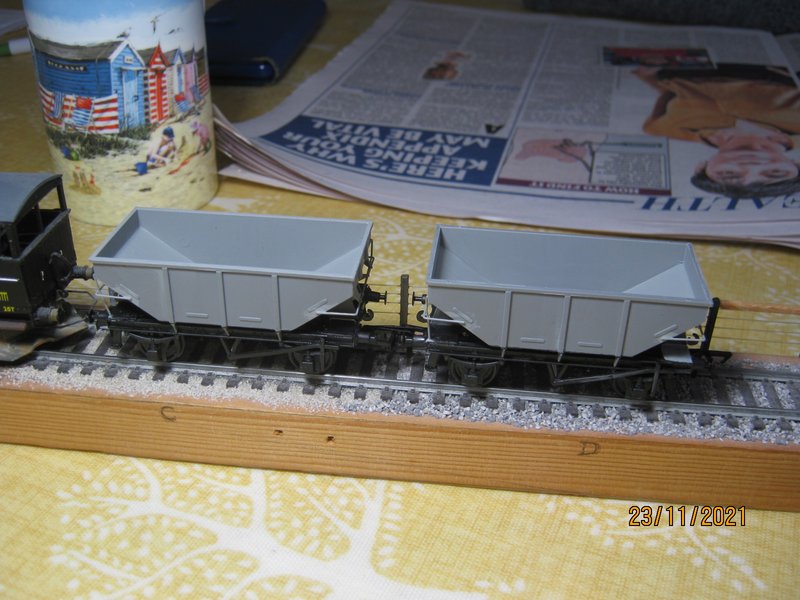 What have I been doing with myself ? I've returned to some Scale aircraft modelling.
These are not flying models, but static, mostly plastic models although pins, fine wire
and any other suitable material gets used.

I decided if I was going to start aircraft again I'd use something in my loft stock and a
subject few will have ever heard of before. A Czech Ba-33 biplane from the mid 1930's.
It's also a Vacuum Formed model 'kit' to be made from components cut from sheet of thin
styrene that had been formed by vacuum over a usually, wooden former. 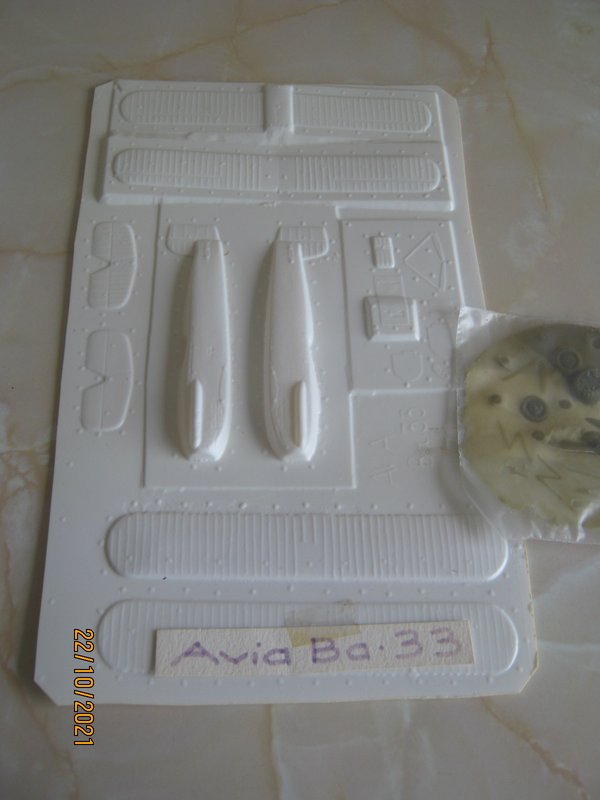 I suppose I should have returned to a 'pending' job that must have been started in excess
of 15 years ago. However that project was a large aircraft, again from a vacuum formed
kit, but that will be a long project if/when I get back to it. As a comparison here the part
built biplane sits on top of the main wings from an IL-76 Russian transport aircraft. More than enough to keep me busy over winter.
I bet the last 4 hopper wagons arrive soon, still, by then the two awaiting a start will be
rolling around my garage layout

Dad-1 wrote:...More than enough to keep me busy over winter...

Just made the discovery this morning that my 'bottomless wagon kit stash' will likely be exhausted before winter is over. Then again I am not as quick as once was the case, do need to use an engineer's square and surface plate and take time to assemble them true, where once it was a 'throw them together, no trouble' operation. It's quite nostalgic finding £4 price labels on some of the PD cards...
Top

I must admit I still throw them together quite quickly, but check out for a true chassis before the glue had hardened
then twist and even lever a solebar up slightly to make certain there is no diagonal rock.
That's the key to good running and why I can run many wagons as light as 15 grams while hauling a 20 wagon heavy
train behind them through 1st radius curves.
Why 1st radius, simply because my ever ready small layout in the garage needed them to pack what I wanted into
the available space. 5ft radius is just a dream !!

My record 'Throw together' a few years back was starting a Dapol 16 ton mineral at 10.30 and having it running before
3 pm while chatting to people about kit making at our January exhibition and consuming my lunch. May I add without
consuming any plastic parts, or liquid poly.

My return to aircraft modelling held while I make up and paint 4 more PC90
13 ton hopper wagon kits.
I've put the video on here rather than the St Oval layout thread because it's
all about these 4 latest kits. I still have 4 more to come, these need to run in
decent length rakes, but I'll not reach in excess of 20 as I have with 21 ton hoppers.

The wire reel is stuck down, I had to check as I couldn't remember.
It must have been a couple of small blobs of Gel superglue, fully
hidden underneath.
It's a fine wire from a jewellery crafts stall, comes on a bobbin.
Mild steel base so can be soldered, a handy thing to have.