I've been on a very long hiatus since I last posted way back in 2014 as I had just been medically discharged from the British Army and have been very busy with sorting my own life out since then so haven't had much to do with model railways up until lately. So the good news is I have found work since then, did an apprenticeship in fabrication and welding which I completed in 2019 and now currently working as a Vehicle Body Builder whilst doing a part time HNC in Mechanical Engineering for 2 years. Also been volunteering with the Severn Valley Railway since 2018 so have been doing something railway related.

Anyway enough waffle from me. Right now I'm starting small again with model railway projects due to lack of time and space for a model railway layout. So for my next project to get me started, I have acquired an old Hornby R.3429 GWR Composite Coach that has seen better days.

My plan is to repaint the outer body to restore the GWR livery that has worn away over the years and make it look more presentable, paint the interior so that I've got decent looking 1st and 3rd Class compartments instead of a grey interior and look at installing some LED lights as-well.

Already got Railmatch paints for the white roof and the Chocolate and Cream colour scheme, will need to source replacement decals for the doors and logo. Also will look at painting the gangway doors as they are currently just moulded black plastic.
Last edited by AJFE 2488 on Sun Oct 03, 2021 10:32 pm, edited 1 time in total.
Top

Go for it! You could end up with a convincing model of a preserved line, and that way you can run a lot of variety of different trains.
Modelling On A Budget ---》 https://www.newrailwaymodellers.co.uk/Forums/viewtopic.php?f=22&t=52212
Top

As good a way as any for getting back into you railway schemes.

So first bit of progress on the Coach project.

Had a day out at the British Motor Museum earlier today to visit the Great British Model Railway Show and bought myself a few bits and pieces.
Got hold of a LED Lighting Strip kit from Layouts4u along with a Flickering Firebox LED Kit which I'm saving for another project.

The kit comes with a strip of LEDs with copper tags in between them and can be cut to length, a decent amount of thin Black and Red wire, a 3v button battery holder, a button switch and instructions. looks easy enough to sort out if you are happy with soldering.

So Coach is disassembled again to get the interior out to see where the LEDs need to go. The instructions suggest sticking the strip to the roof but instead, I've opted to cut a 200mm x 14mm strip of styrene sheet to stick the LEDs to.

Since the LEDs aren't spaced far enough to have one LED per compartment without overlapping each other, I've opted to cut the LEDs into singles and individually solder them together with the provided wire.

Once sorted, I drilled out a hole in the bottom of one of the coach end pieces which conveniently slide out and superglued the button switch to it. That way I can easily switch the LEDs on and off with having to move anything out of the way.
Battery holder and switch are soldered on next to complete the circuit.

Now for the testing

And in the dark

So overall, lighting effect looks good so far and happy that it all works. Next stage is going to be repainting the interior and making it look a lot better than the bare grey plastic it currently is. Also will most likely spray the inside of the coach body a darker colour to stop the light bleeding through it.
Last edited by AJFE 2488 on Mon Nov 01, 2021 8:27 pm, edited 1 time in total.
Top

AJFE 2488 wrote:Had a day out at the British Motor Museum earlier today to visit the Great British Model Railway Show and bought myself a few bits and pieces

Me too, it's the first time I've been there and not struggled to get around,

PS The image command you are looking for goes like this [img]https://the-url-including-filename.ext[/img]
The URL must be the one generated by your hosting site for public display, not the one you use to access the file.
Growing old, can't avoid it. Growing up, forget it!
My Layout, My Workbench Blog and My Opinions
Top

AJFE 2488 wrote:Had a day out at the British Motor Museum earlier today to visit the Great British Model Railway Show and bought myself a few bits and pieces

Me too, it's the first time I've been there and not struggled to get around,

PS The image command you are looking for goes like this [img]https://the-url-including-filename.ext[/img]
The URL must be the one generated by your hosting site for public display, not the one you use to access the file.

I found it a bit of the tight squeeze getting around the conference rooms with the larger displays there as it was very packed yesterday. But thoroughly enjoyed my day out as it has definitely renewed my interest in model railways after a long break from it. Even bumped into the Duty Shed Master I was working with on the Severn Valley Railway on Saturday and had a good chin wag with him while he was manning a stand for the railway. Had a good mooch around the Motor Museum itself and very interested in all the motors they've collected over the years.

Thanks for tip about the image sharing. Figured out what I did wrong as I was copying the link from the post before but managed to grab it from the image this time.
Top

Update time, managed to find time to spray the coach interior with some Army Painter Leather Brown Spray Paint to give a decent undercoat for the Body interior and the Seat insert.

So major improvement already over the bare plastic it was left as and it also helps with stopping the LED light from seeping through the plastic. 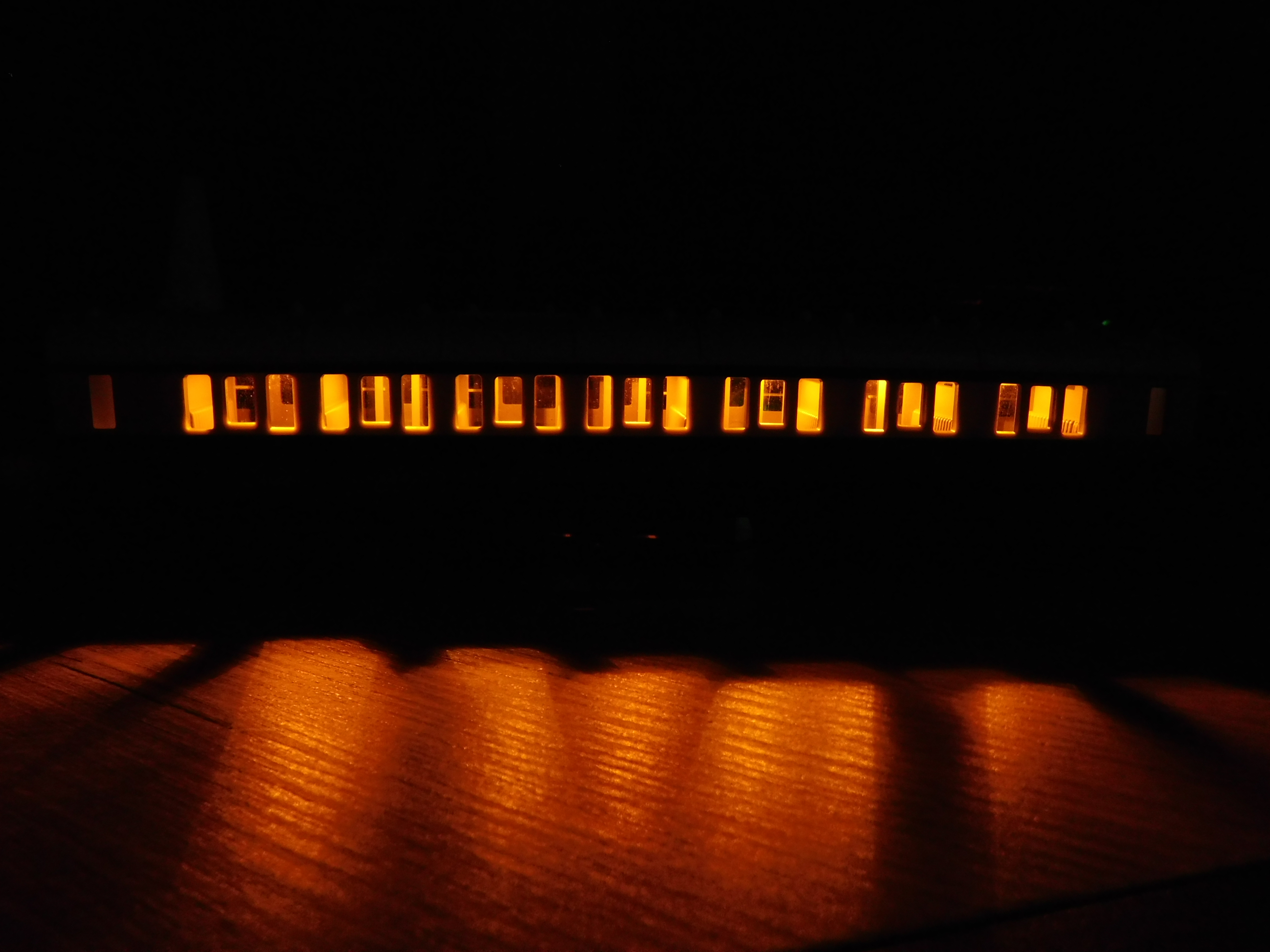 So next stage is to paint the seat insert. Have spent a while trying to research this so that I can get this right and from what I can tell, this carriage is supposed to be a Collet Corridor Composite Left Handed Variant. So that should mean when you look at it from the Corridor side, the First Class Compartments are on the left and the Third Class ones on the right. According to the research, there should be 4 First Class and three Third Class Compartments.

When you look at the body from the corridor side, you can tell by the window pattern how many compartments there should be yet Hornby only marked this one up as only having 3 First Class Compartments. When you look at the Seat insert, you can see another mistake they made which was to only model 3 First Class Compartments which had the arm rests in the seats and the remaining 4 as Third Class. This is an old model so I can't knock them for it but it is a tad annoying that they've done that.

So problem now is how should I proceed with this one. Do I simply restore it with fresh paint and transfers as Hornby originally modelled it or should I paint it up so that it is prototypically correct with 4 First Class and 3 Third Class compartments with the relevant transfers?
Top
Post Reply
7 posts • Page 1 of 1