Post your design ideas for any layout that you are planning to build in the future. Keep members up-to-date with your designs and future plans for your layout.
Post Reply
33 posts

Small update, wood for the baseboards is arriving next week, and the last pieces of track should be here sometime this week.

However, being bored today, I had a little play around with the plan again, as I wasn't happy with the station area, and also wanted to plan the bridges a bit more (especially having made the metcalfe kit yesterday and found its longer than I thought)

So the main changes are, instead of having platforms between the passing loops, I now plan to have a platform between the mainlines, and then another on the outside of each passing loop. But doing this, the spacing on the plan now looks wrong using set track points, so I'm starting to think I may have to source some Peco streamline points instead, to move the lines closer together, though I have already ordered the set track points so I might just have to go with them.

I've also had another look at the junction for the garden section. Initially wanting both loops to go out in to the garden, there was only 1 place I could put the junctions. I tried but I couldn't make the junctions work, while keeping to larger radius track, without needing some pretty expensive custom track work. For that reason, I decided to concede defeat and just have the outer loop go into the garden, but I left its exit and entry point in the same place. Having had a look, I can keep the exit from the shed in the same place, but if I move the entry point to the same corner it means I don't have to run it all along the outside rear of the shed.

Here is the latest rendition of the plan below. As before, yellow is the 1st phase, orange being the later extension.The white bits on the left are the bridges. The bridge on the orange extension being a metcalfe brick bridge, for 'the old line', which is still used for goods. The bridge on the mainline loops being a later steel replacement, for the faster expresses, this is a laser cut wooden kit I've ordered but not yet arrived. The green section is the baseboard for the section, at a lower height than the other boards, grey is a road that goes under the bridges, them up what will have to be a fairly steep slope. This slope leads to a goods yard, and the road follows along the edge of the baseboard to the corner in the bottom right of the plan. I'm undecided what to put here, more railway related buildings, more track, or some houses or something. Possible another bridge leading over the railway to something right in the corner. And finally, the top left corner of the plan is now empty, I'm not sure what to do here, maybe a couple of sidings with coaling station and water tower. 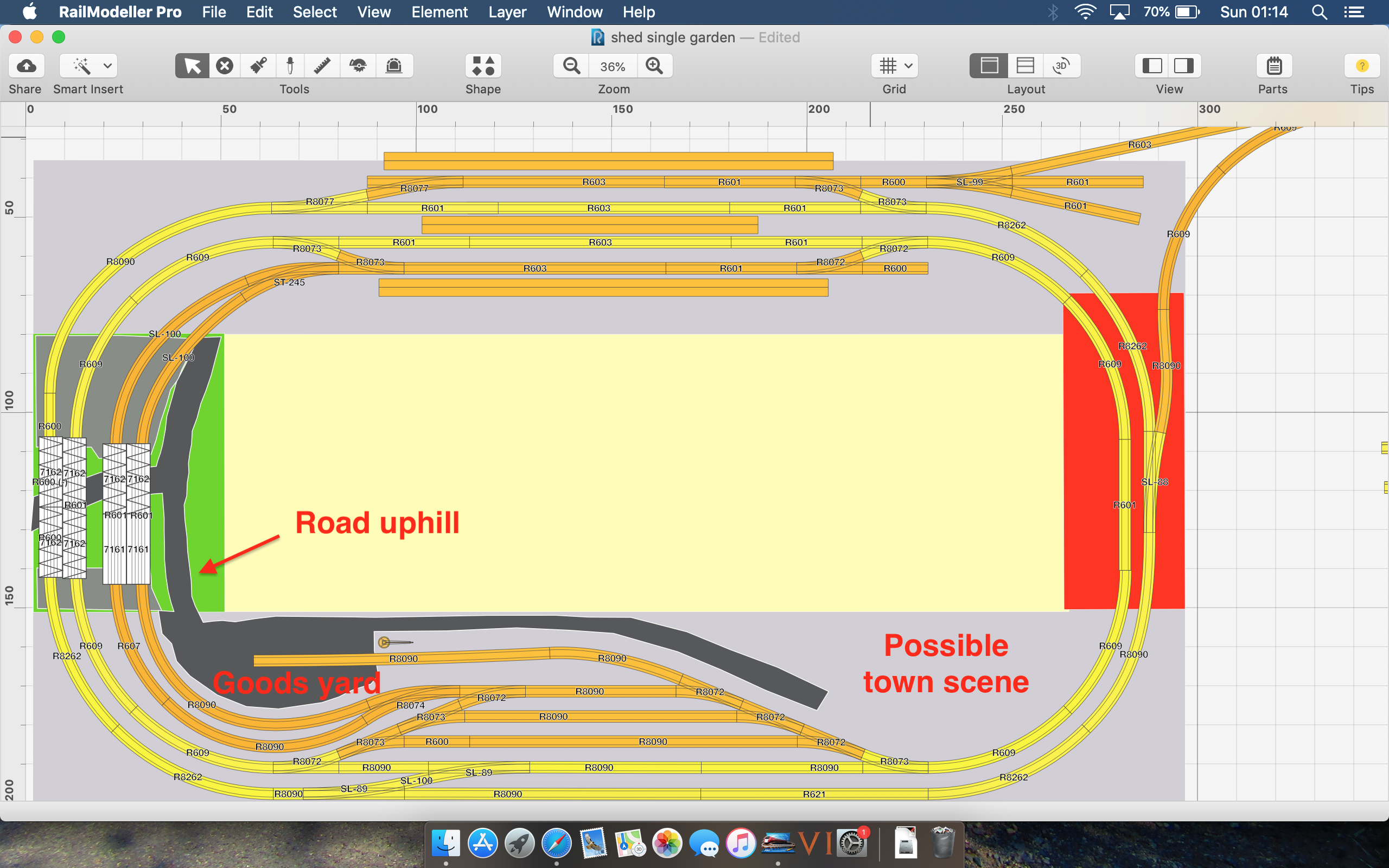 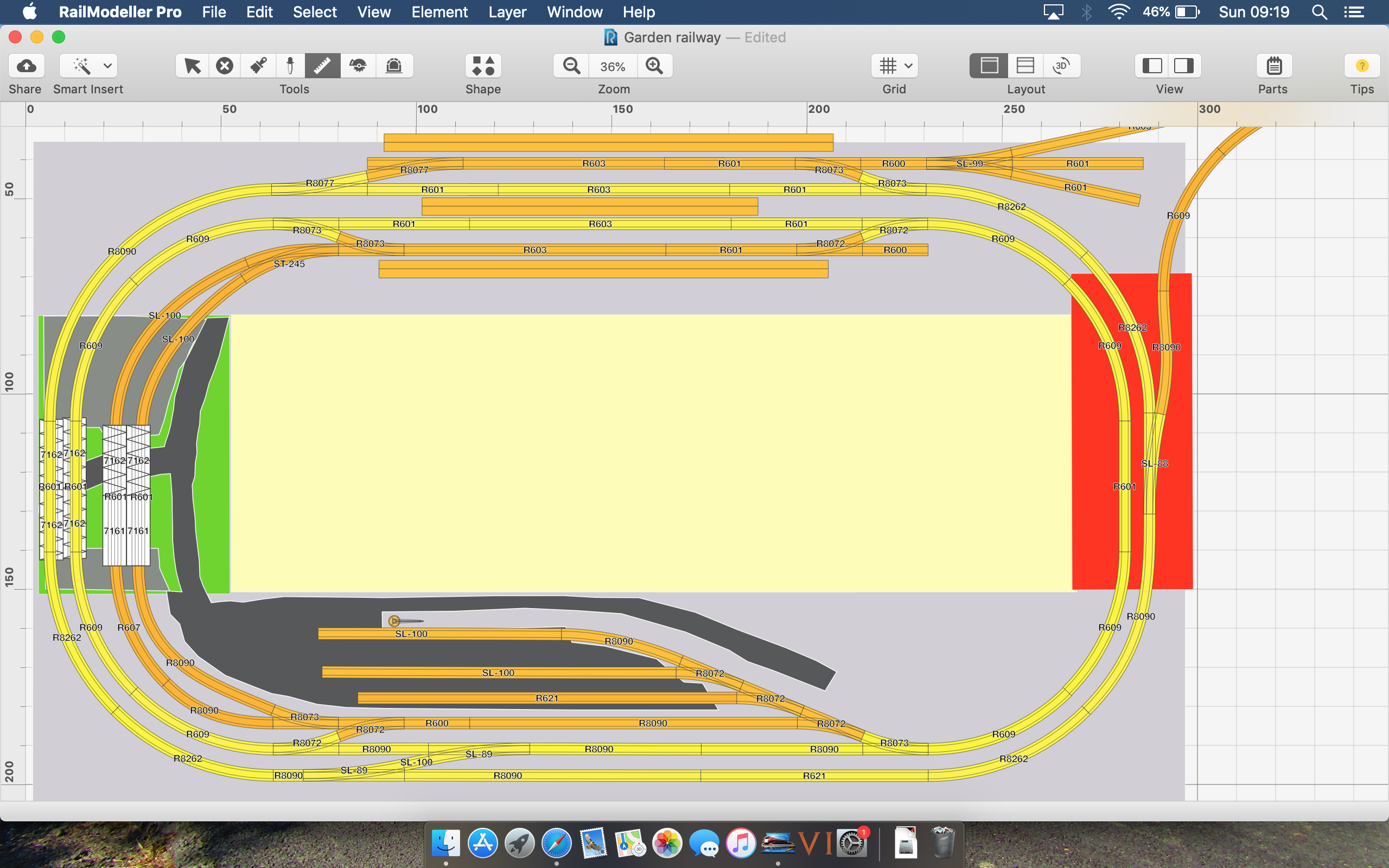 I've done a little more tweaking, which I wish I could resist, as every time I do I end up needing more/different pieces of track!
However, the wood for the baseboards has just arrived, so one it's dry I can make a start on those, and I'll be distracted from fiddling with the plan anymore. Though I'm not completely convinced on a couple of elements.

I'm in need of some help now though. With the kids tracks they've always been small enough to not need to bother with more than just a single power point on the track, and for ease of use for them I've not done any isolated sections. But with my layout being considerably bigger with more elements I want to power each piece of track separately, and how suddenly realised I'm going to need to introduce switches to power specific sections at a time, but I've no idea on the best way of doing this.

I've been through my plan and coloured the sections that will run separately and other sections that will be powered from the same controller as another, but will need to be isolated at times. I'll attach an image and try and give a clear description of what I'm after, if anyone would be able to tell me where I'll need isolating joiners, and switches to turn on/off power to sections, it would be very much appreciated.

Here is the image: 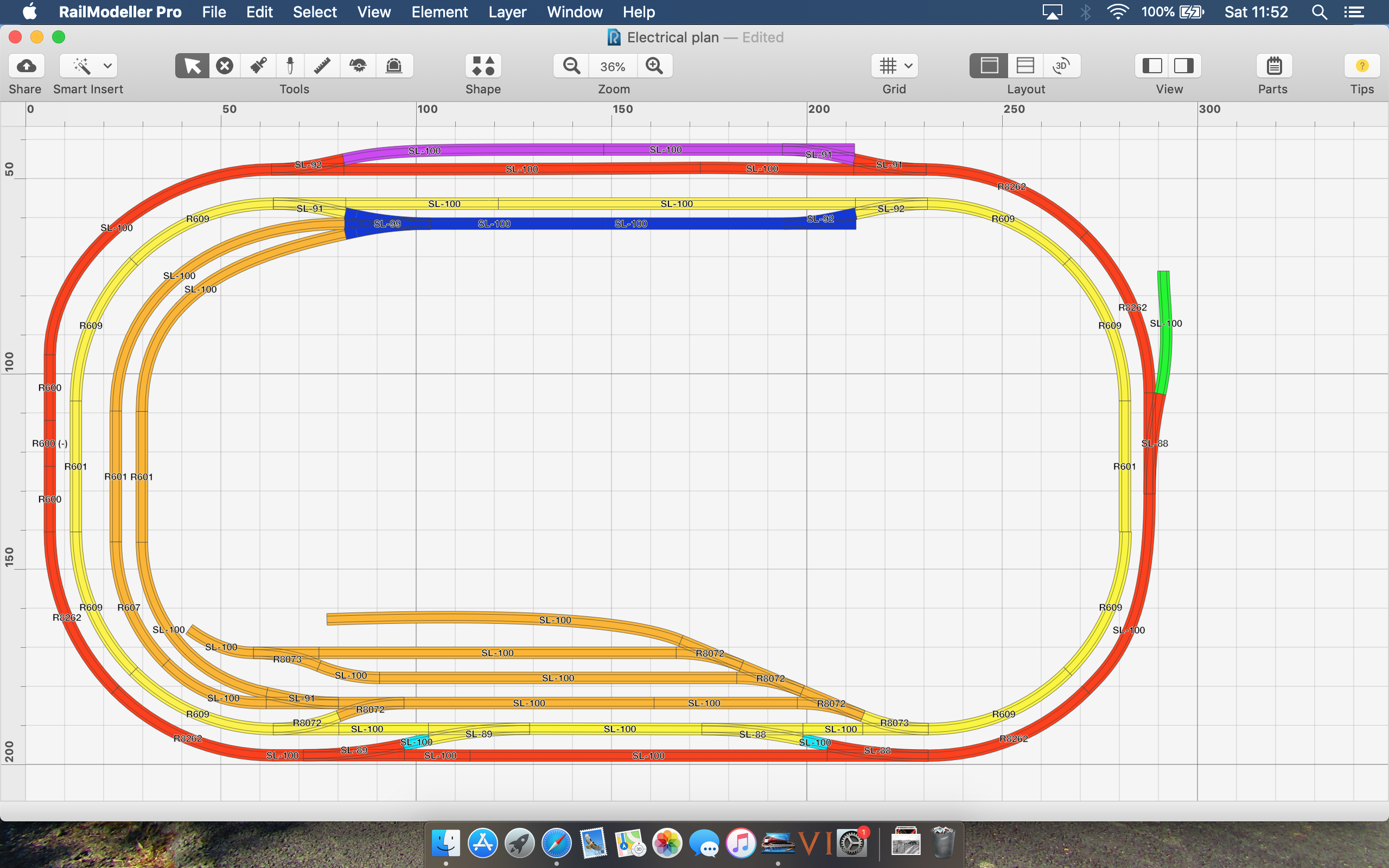 The red, yellow and orange sections will be run from different controls, the red and yellow from an H&M Duette, orange from a separate controller, not yet purchased. The green track piece will be for the later garden section, and will just be the point at the moment so no need to worry about that yet.

The purple section will be powered by the same control as the red section, but will need to be switched so I can stop a train on the red loop and run another around the red oval, and through the purple section. Likewise, the same with the dark blue section being controlled by the yellow control.

I would also like to be able to, if possible, run a train from the yellow loop, through the dark blue section, through the orange section, and back round the yellow again. Is that possible? Or not as they have separate controllers?

And lastly, I've got some points at the bottom of the plan to allow trains to swap from 1 loop to the other, I'm guessing the light blue sections between the points will need to be isolated and have a 3 way switch so they can be unpowered, red, or yellow?

I'm at a complete loss here, and it's making my hurt just trying to figure it out
Top

Just a quick question. I’d like to introduce some height to the layout, and set 1 of the tracks slightly higher than the other 2.

I’ve got limited room, but I only need to raise it up approximately 18mm. The approach and incline either side would be on a curve, 1 end about 600mm long and the other nearly 750mm. Is this an ok incline? It’ll only be class 08 shunter a with 6-8 trucks or a couple of coaches, going over this section, and maybe a couple of 0-6-0 tender engines, depending on if they can make it around the tight curve.

*edit* just to add that approx 18mm is ideal, but could go down to 8-9mm if necessary. While trickier to do, it would be possible if this would be better.
Top
Post Reply
33 posts