Just received this from Hattons.

"Heljan 266209 Beyer Garratt 2-6-0 0-6-2 47975 BR "Lion on wheel" emblems on cabsides & standard numbers on tanks 1950-55. Pristine ( £199.00
Our latest information from the supplier suggests this item will arrive with us July 2014
Whilst we are hopeful this information is accurate, manufacturer lead times are frequently prone to be delayed. This information is to be used as a guide only."


Its like watching treacle flow uphill!
COLIN.
“What experience and history teaches us is that people and governments have never learned anything from history, or acted on principles deduced from it”

I am still waiting for mine with fingers crossed that it eventually arrives.
With seven more variants still to come and them still having stocks of over ten of the first two despite being on sale a few weeks now and also the many returns that have been reported, I hope this venture does not prove a flop for them.
I notice the promised increase (was it £10) on the models release hasn't materialised. Maybe there will be a price drop as with their 10000/10001 models.
Pete.
Gauge is not spelt guage. Remember to put another "m" in remeber. Manufacturers has two "r"s in.
When you buy something, you have bought it, not brought it.
Before you post, are you really LOL and do you NEED to tell us?
Top

I am a little surprised that there seems to have been no further uptake of this model among those who post here. Only the largest ever OO steam model in RTR, and I strongly suspect that once Hattons have sold out the prices will begin to climb for s/h. Don't expect a re-run...
Top

My understanding was that this model had sold well. There have been returns - there always are - but not in their thousands. I'd be surprised if it ended up as a remainder and heavily discounted.

At long last it has arrived it seems like years, it was! Be very careful unpacking lots, and lots of fiddly detail.....

COLIN.
“What experience and history teaches us is that people and governments have never learned anything from history, or acted on principles deduced from it”

Bigmet wrote:I am a little surprised that there seems to have been no further uptake of this model among those who post here.

It's a very big loco. So a very expensive one
Looks stupid with a little short train
Needs a big layout to look convincing
Unlikely to appeal to diesel era fans

I'm not surprised! Yes I would love to be able to say I've got one, but unless I had the layout to do it justice I would get no pleasure from putting one in a glass case.

There's a trick I learned from the two foot Garratts in South Africa. It wouldn't work for me but perhaps it might help someone else. The MPD was on the coast on the south side of Port Elisabeth. and the line went around the southern end of the city then headed down the cape. There was a cement producing plant on the coast on the north side of the city. It was connected by a private two footer, around the north side and met up with the main line at some exchange sidings. Every morning, one of the Garratts would hitch up a brake van and chuff along the coast then off out to find its train. At the Exchange sidings there would be a long rake of empty hoppers, assembled throughout the previous day by a Funkey diesel (same as the Welsh Highland's one) which spent its day hauling away loaded hoppers and bringing back empties. The Garratt would take the empties down the line to the quarry and swap them for loaded ones. He then brought back the loaded ones to the exchange siding, collected his brake van from the end of the train and chuffed back through the suburbs and into the depot.
If you lived or worked on that strip of the coast, all you ever saw was a Garratt heading out with its brake van, then coming back with it at the end of the day. So if you are really only interested in watching those two sets of motion as they crawl past, all you need is a depot and a hidden siding. Don't think it would do it for me.
Growing old, can't avoid it. Growing up, forget it!
My Layout, My Workbench Blog and My Opinions
Top

Had one going round at the model club that I am apart of. The front bogie trucks kept coming off the track, in both directions.
http://www.flickr.com/photos/39259141@N05/ Mostly photos of railway surroundings in my life.
http://whitwellstation.com/
Top

Well I've got 2, both LMS. One standard bunker, and one revolving. Look very nice along side my AD60 Garratt.

Now if only I can get a NGG16 for the narrow gauge line. I'll be in heaven.

Only the insane have strength enough to prosper,
Only those that prosper truly judge what is sane.
Top

According to Hattons, several types have already sold out, and there's limited availability on several other types.
COLIN.
“What experience and history teaches us is that people and governments have never learned anything from history, or acted on principles deduced from it”

It's a while yet before they sell out. Then we'll see what the second hand market activity is like.

A comment I heard in a model shop tickled me, that between them Hattons and Heljan could not have planned to time this any better. I fully grant that this is an expensive item, and rather large for most layouts (then again, any pacific is already well oversize for the average layout, and they seem to sell year in year out) but rolling it out while Hornby and Dapol are struggling to bring much OO product to market, and Bachmann's new introduction rate is running slowly must have worked in H+H's favour big time.
Top

I am running two of these on my layout.

So you do not need a loft or basement layout to run big locos.

The Baltimore and Ohio Railroad, “Linking 13 Great States With The Nation.”
Top

I had a friend bring his Garratt around a few months back (when I still had a large layout) and we coupled just about every wagon I had to it (about 110 in the end). The Garratt just about coped, although the train didn't - kept pulling it self off on the corners. Eventually we gave up on the wagons and just stuck it on a few coaches (A few being 13) and it understandably had no issues what so ever. 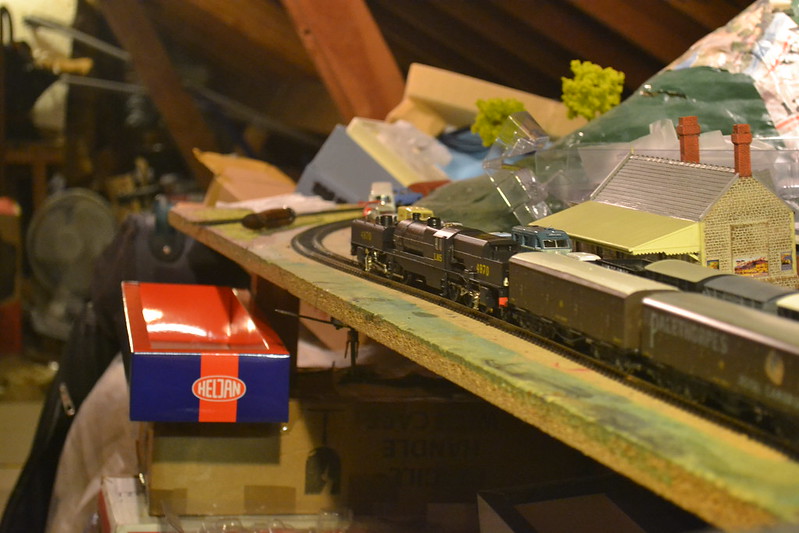 I was very jealous, but am yet to take the plunge and buy one! (it's hard enough to justify spending that much, let alone when you don't have a working layout yet!)

I see that it won the 'Model of the Year' for OO steam by no small margin against several other good models, which would tend to indicate to me that most purchasers have had good experiences with it. It might be that the typical good experience is only getting it out of the box and looking at it of course...
Top

Motor burn-outs have been reported by a number of RMWeb contributors and bits of loose detail by others.

My experience: the first was returned because of broken and missing detail. The second had detail repairs to the front buffer beam undertaken by myself and a later super-glue repair to part of the motion which had worked loose from the body. It runs well but a little noisily.

I'm left wondering if the motor burn-outs are as much to do with individuals attempting prototypical or prototypical + length trains as the model being built to a price. Reports of 110-120 wagons in tow - and I did this successfully myself - must place a considerable strain on the mechanisms, particularly when in drag on curves.

I don't run mine a great deal, a case of buying a novelty as much as anything else. I'll not attempt overloads in future however, given the experiences of a few others.

Hattons are only listing a heavily weathered early crest with rotating bunker as available. Given the number of You-tube videos from disappointed customers I decided to avoid this model as I did not need a shelf queen. Obviously some may have enjoyed their time with their models for it to get model of the year, but for me the risk of a failed dead on arrival was too great a concern.
Top
Post Reply
165 posts