Whilst measuring up carefully for the struts for the roof, it became obvious, due to the curvature of the roof, that my chimney is too short

. Interestingly I have another (Smallbrook) chimney (which is destined for a future vertical boiler loco) which is actually a bit too long. The obvious light-bulb moment here finally dawned on me (!) and a piece of the latter was removed and spliced into the former to increase the height by a few mm. To accomplish this, the chimney did of course have to be removed from the loco - here it is, suitably lengthened, resting in rough position before repainting: 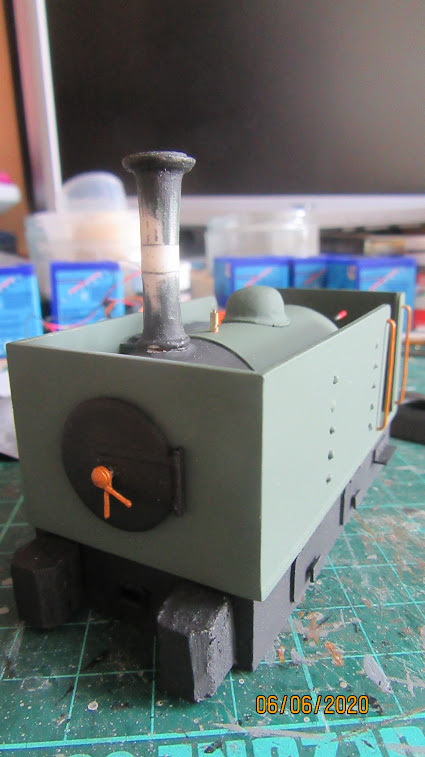 This gave me two advantages:Anyway, before building and fitting of the actual roof, a few more little jobs were completed:
1. nameplates and numbers (from Narrow Planet) 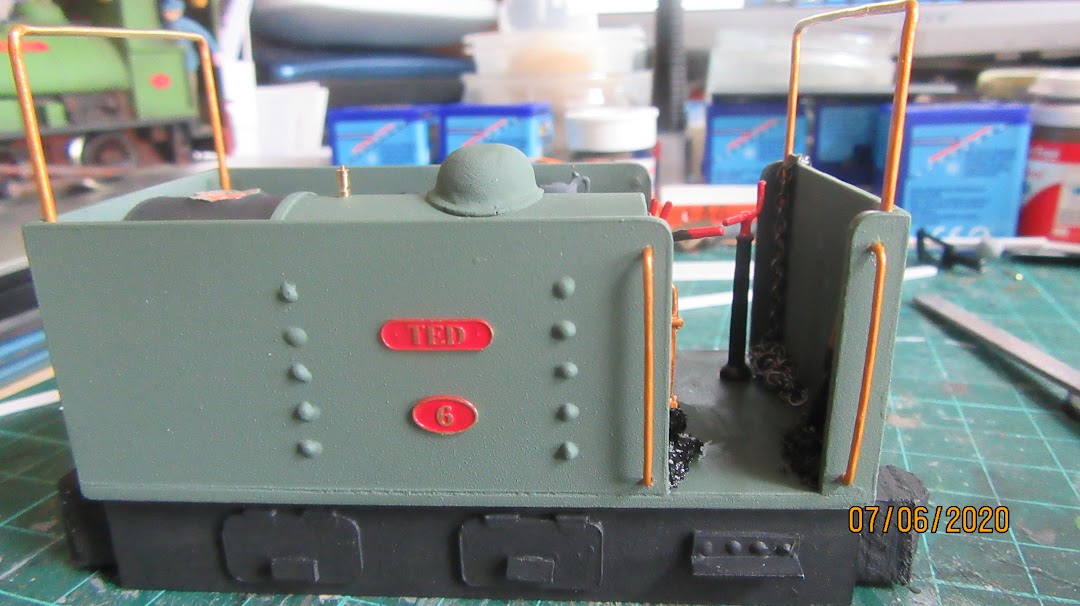 2. some coal, a chain, handrails and roof struts 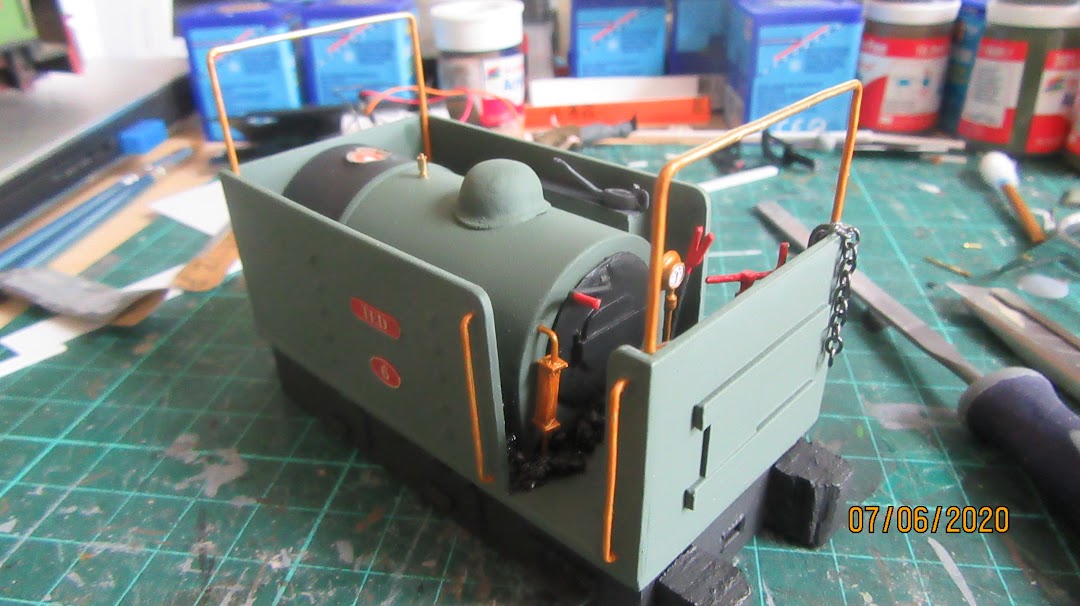 3. some more detail items for 'interest' - oil can, spanner, coal shovel (latter not visible in these shots) 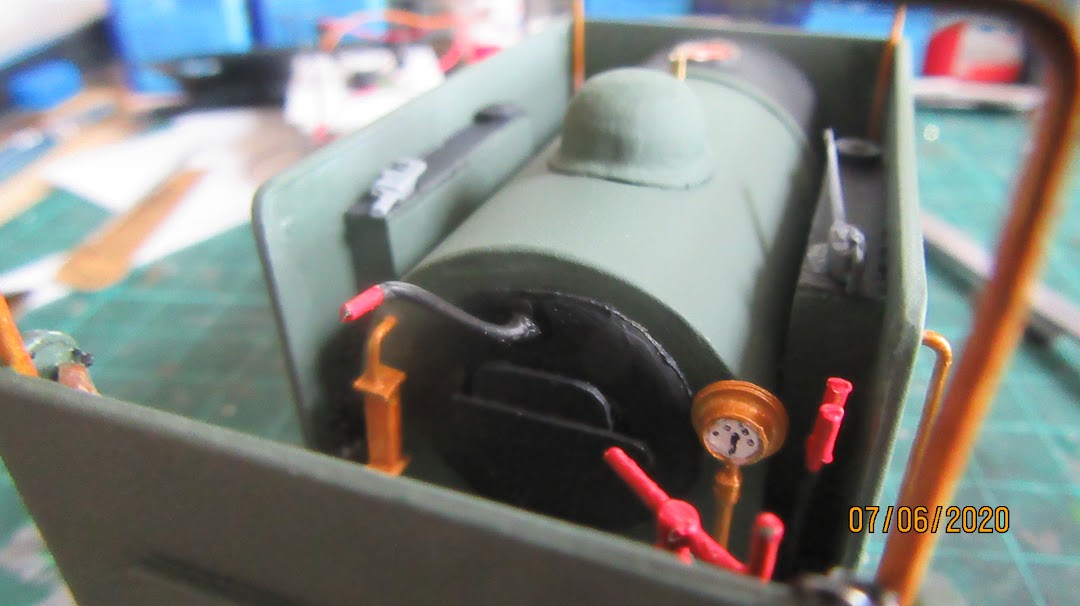 Next comes weathering/dirtying and fitting of the roof

That is looking excellent!
Top

As I said, next was the roof. For this I cheated slightly and purchased a pre-curved plastic roof piece from 422 Modelmaking. For only £2 I thought it would save a lot of hassle - and they gave me a choice of radius curvature - 50mm or 70mm - I chose the latter. The piece was 200mm long, so enough for more than one model (though in my case a c*cked up the first one by making the hole for the chimney too big - as above I found I could get away with a better-looking smaller hole once the chimney was temporarily detached from the loco).

Anyway, some strips of plasticard were cut and attached to the trimmed roof ready to slot onto the struts on the locomotive - I made the space between them a bit longer and wider than required, to allow for adjustment of the final position when fitting later. Before painting it looked like this: 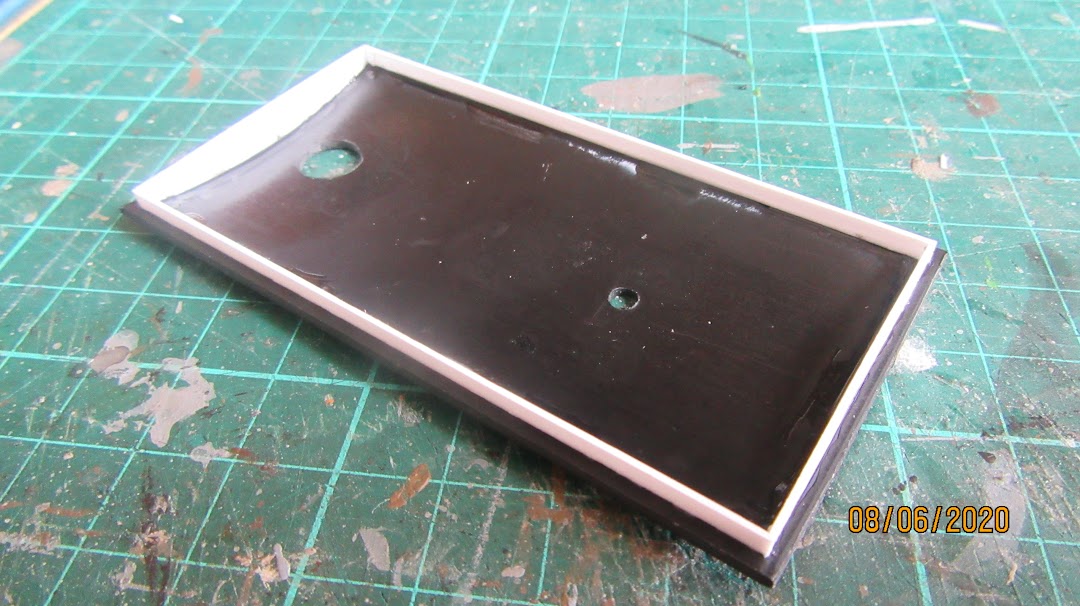 . Below are some (far too many) photos of 'Ted' after fitting onto the chassis and checking he runs! I know some don't like the tension lock couplings, but I actually don't mind them. They are fitted into NEM pockets, so can be changed at a later date if/when I decide what to change them to! For my first scratch-built loco (body) I am pretty pleased!

Anyway, to the photos - thanks for looking 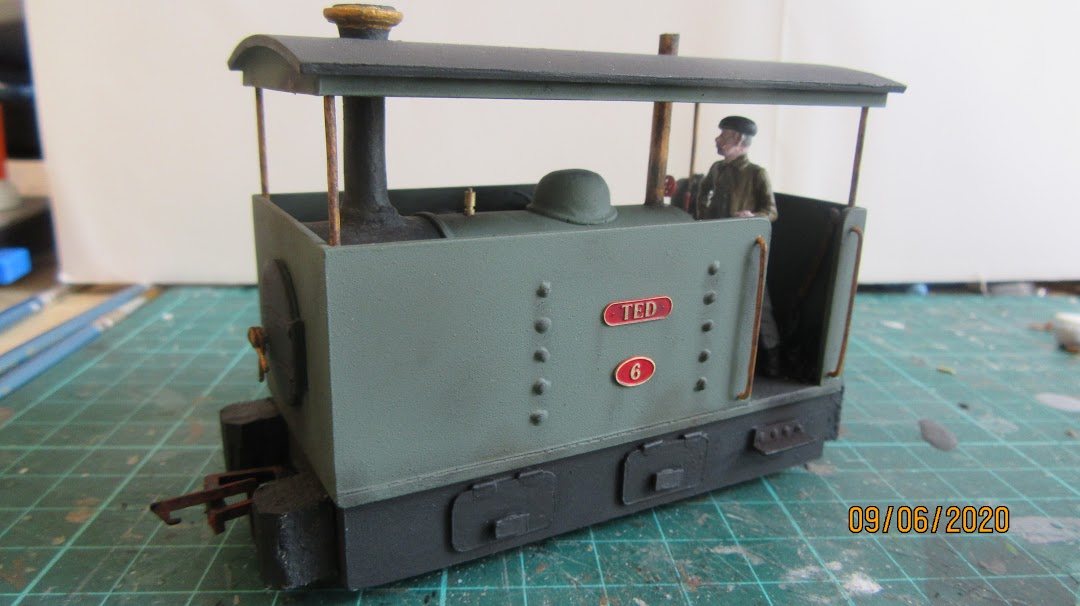 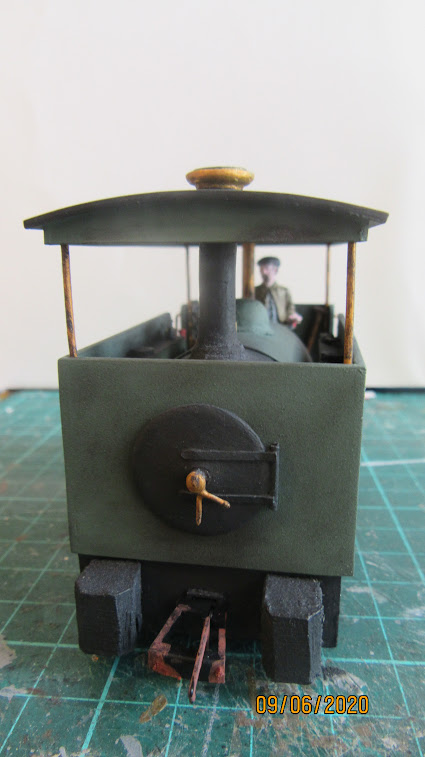 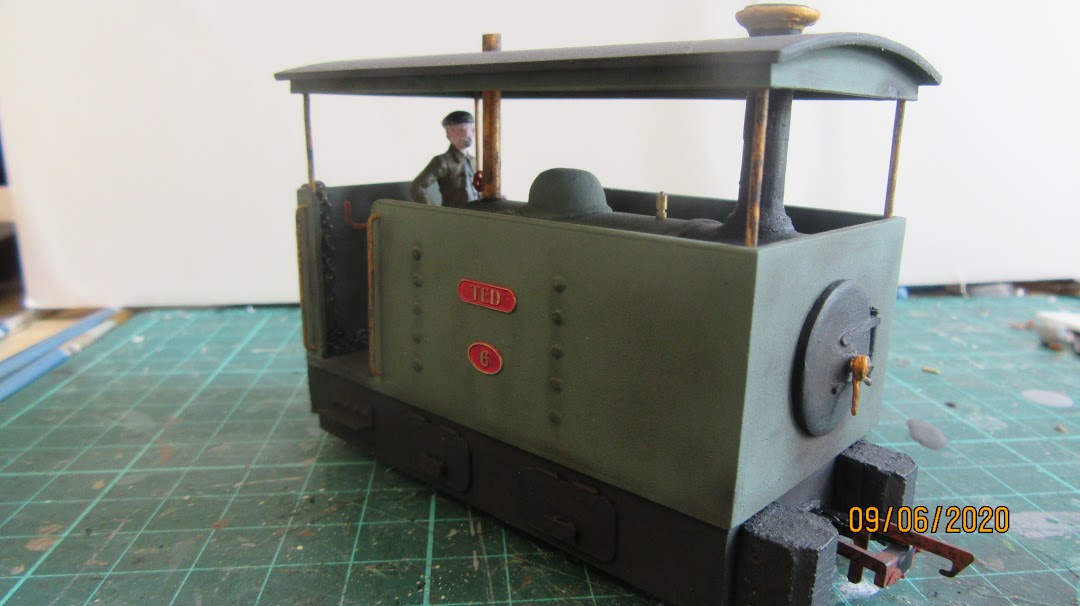 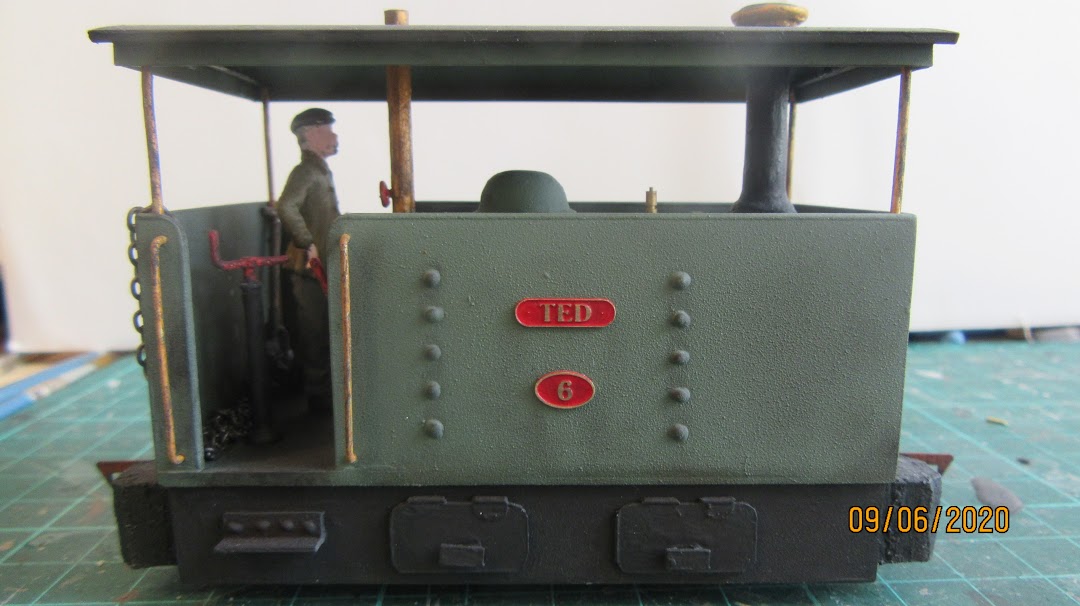 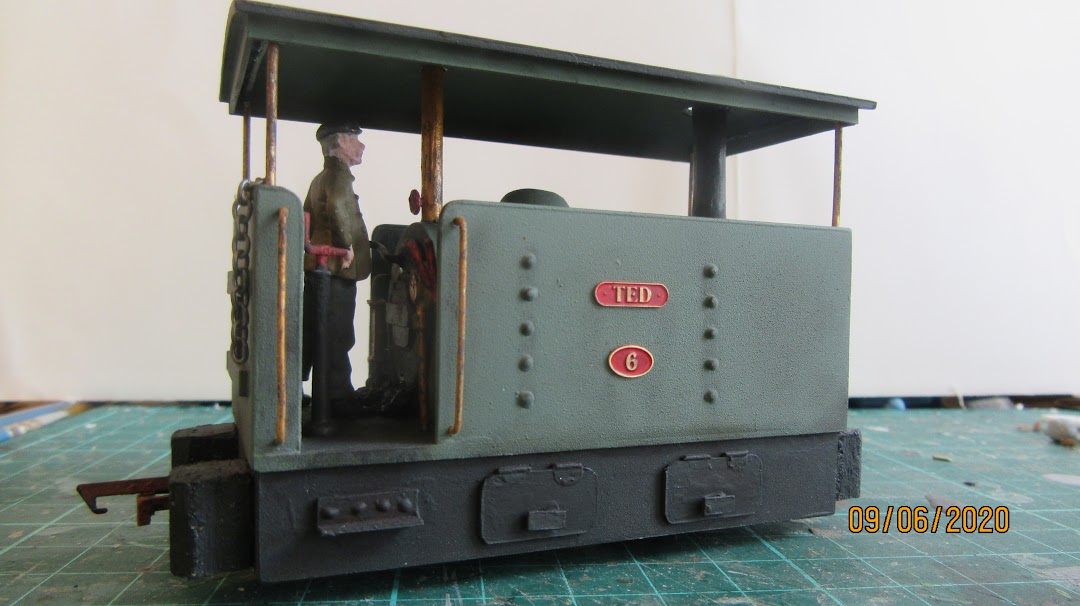 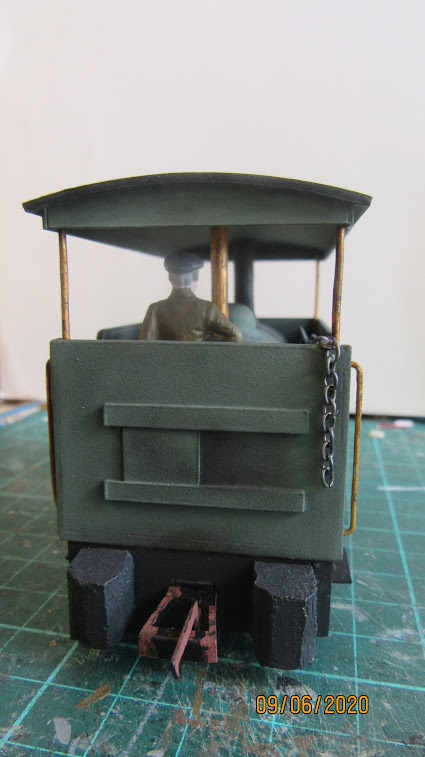 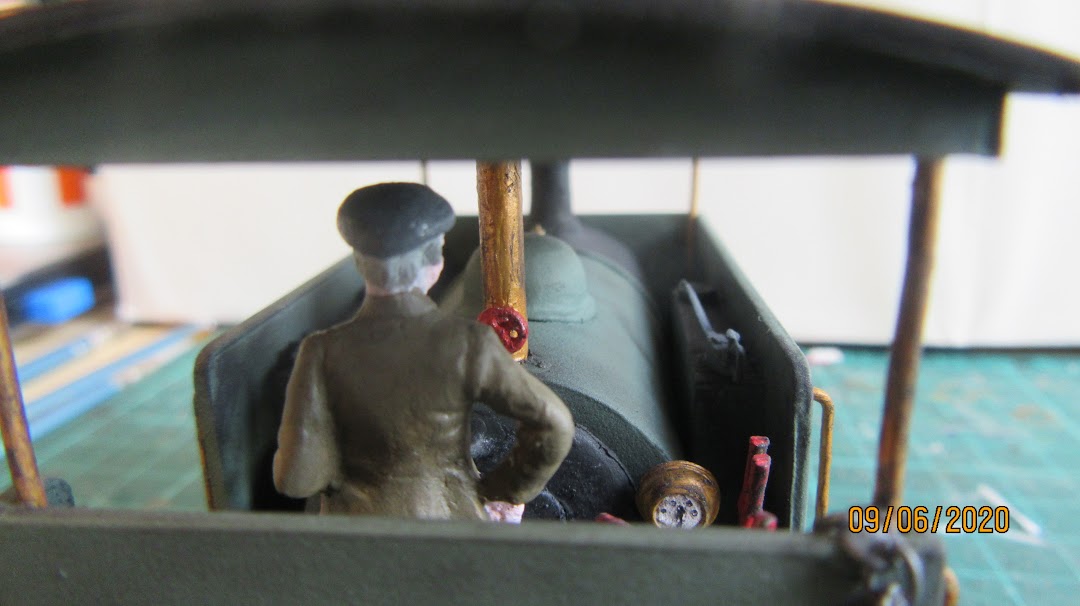 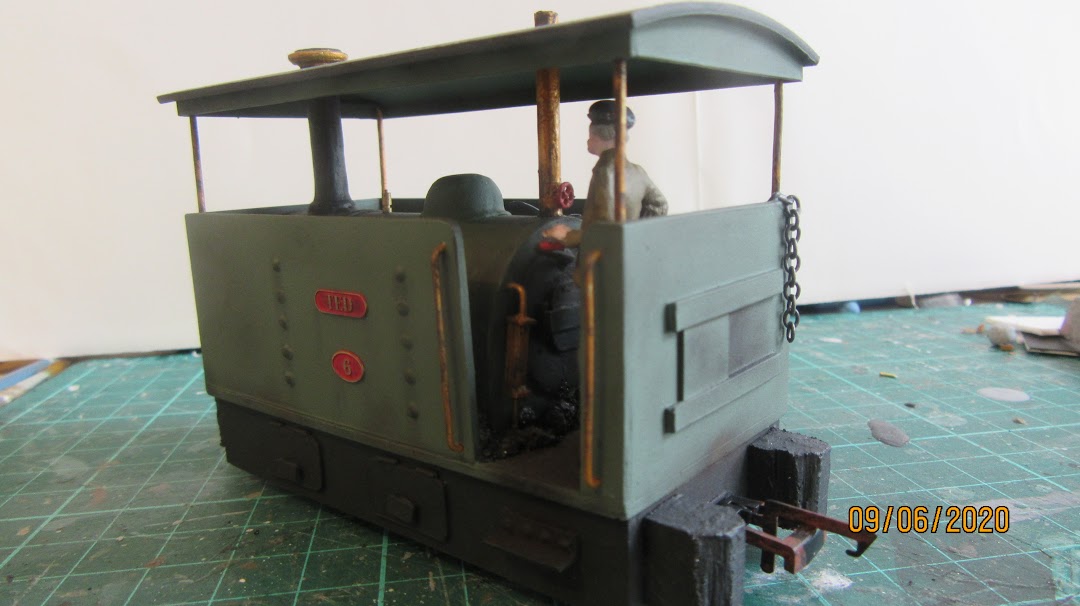 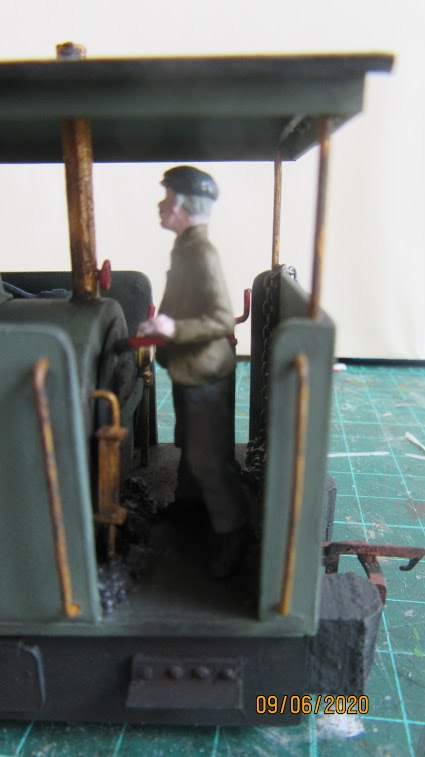 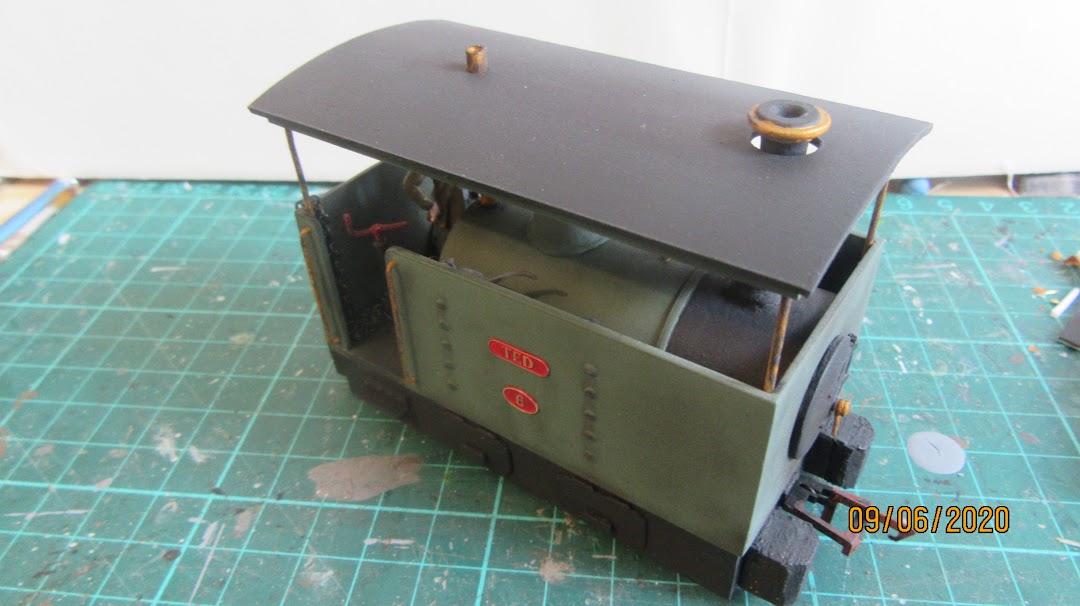 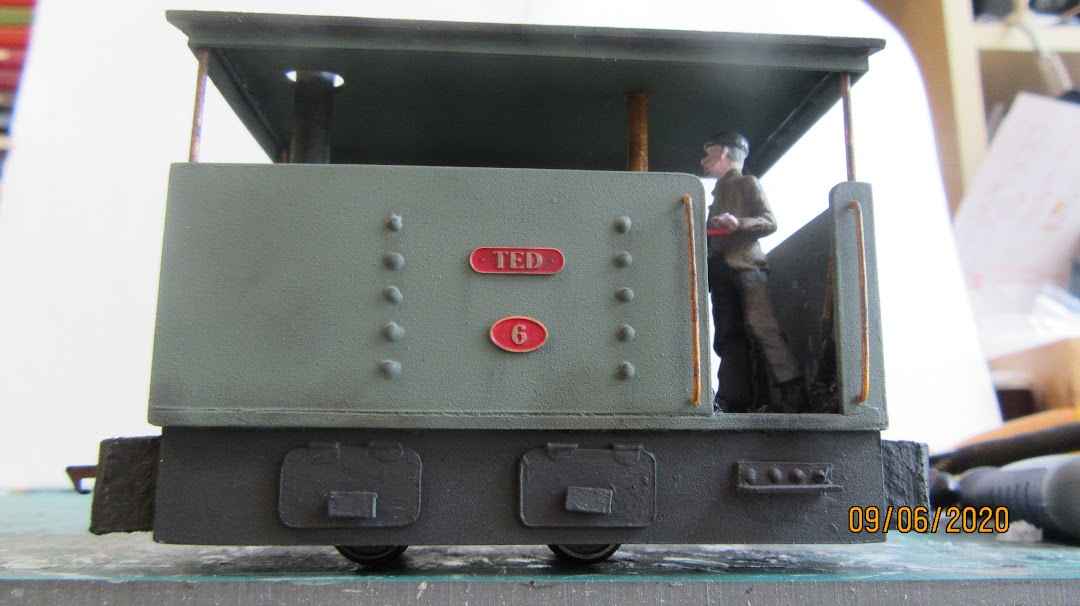 outstanding work here! not sure how I've not seen this thread before
Layout: https://www.newrailwaymodellers.co.uk/Forums/viewtopic.php?f=22&t=54997
Top

Michaelaface wrote:outstanding work here! not sure how I've not seen this thread before

How can you not have seen PNP's lovely models? Cover your eyes PNP!

'Ted' looks excellent! I particularly like the cab detailing and pile of coal on the footplate. The subtle weathering breaks up the flat sides nicely too.
Once an engine attached to a train, was afraid of a few drops of rain...
Top

Many thanks for comments - this was my first attempt at a scratch-built loco (body) so I'm very pleased how it turned out. All my locos are named after recent family ancestors and I think this one is a fitting tribute to 'Ted'

The way you've rusted the couplings looks good too- rather than try to hide them, now they just look part of the model. I guess when it's your railway you can just decide that's what the 'real thing' uses. A representation of the brake pipe could be added to break up the flat ends if regulations require continuous brakes

Once an engine attached to a train, was afraid of a few drops of rain...
Top

My rate of modelling will now reduce drastically, as my extended 'holiday' (officially known as furlough!) will be cut short by two weeks tomorrow, when I have been asked to recommence working

Anyway, I have made a start on some pine trees, loosely following this video I found:
https://www.youtube.com/watch?v=TGlTTOuTGBc

My version of a couple of trees looks like this so far: 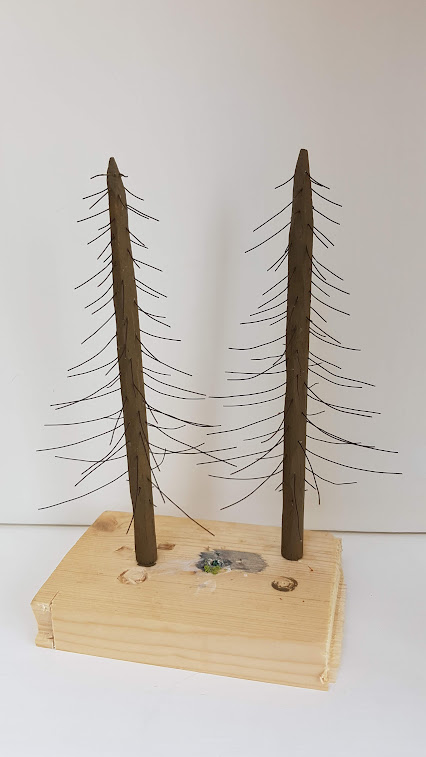 I have used some balsa wood dowels, and florists wire that I had purchased for my (deciduous) trees made a couple of months ago. I am not sure if the 'trunk' is a bit too fat for the height of tree, but I didn't want the trees to be so tall as to be out of keeping with my earlier ones. Anyway, these are just experimental ones to start with - I can always make future ones taller and/or slimmer (in the trunk department) if necessary - once these have foliage and I get to see how they actually turn out

Oooh, no updates in over 3 months - I must be on my summer break

However I have this weekend been constructing a larger-than-usual plastic kit. It came in dozens of pieces (nothing too surprising there, maybe?) but (rather more unusually) it also came with literally hundreds of screws!

It was delivered in three boxes: 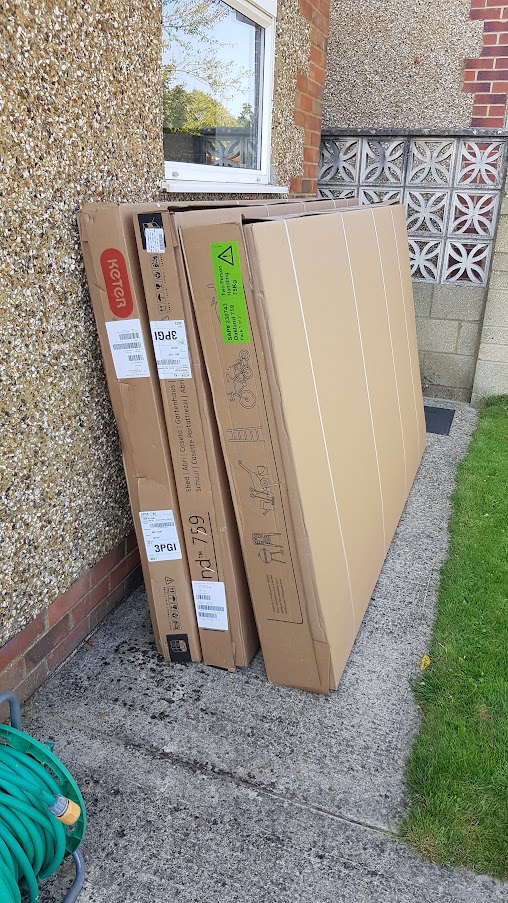 And some of the kit parts were quite large! 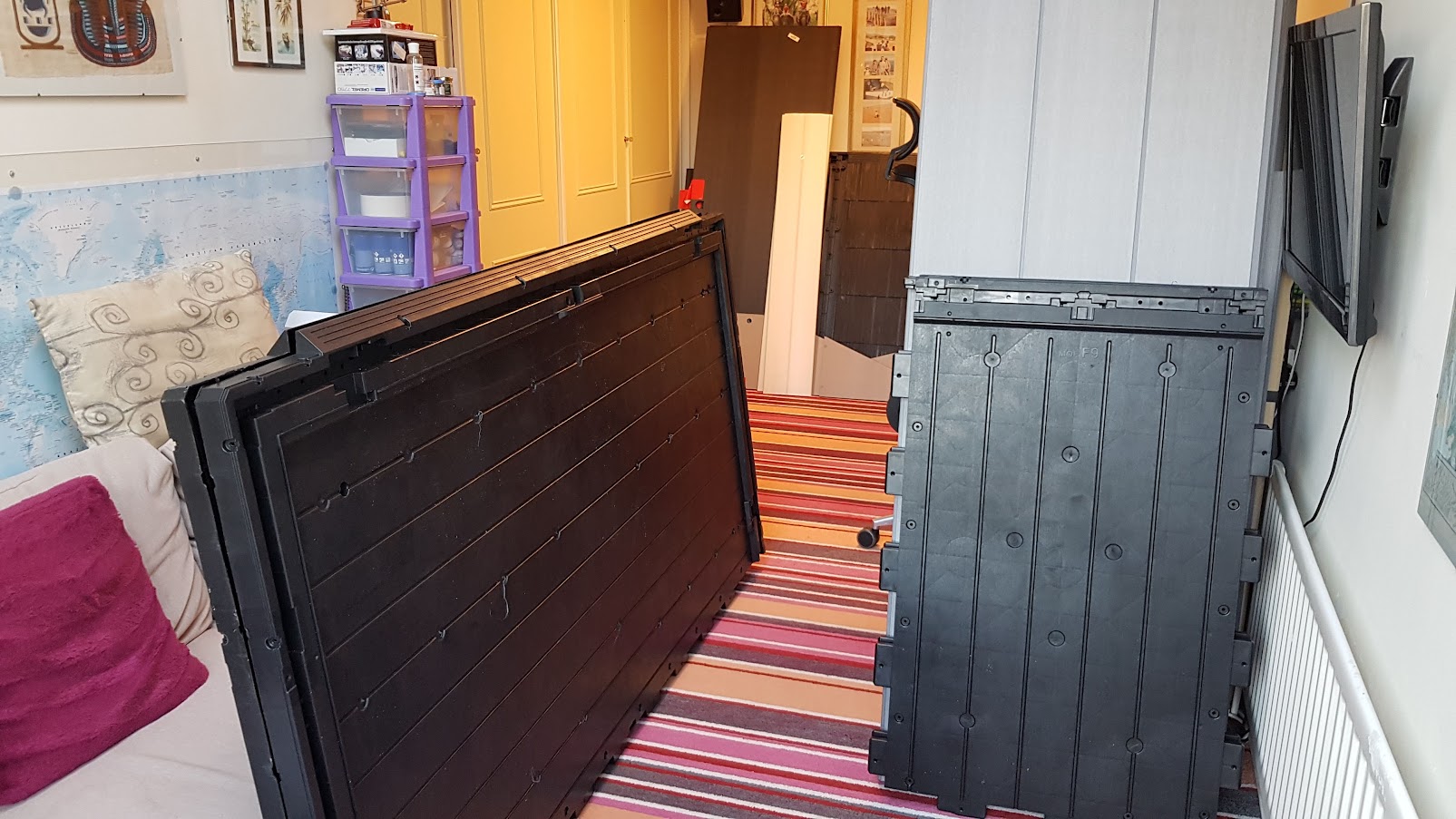 Unlike most kits I make, construction was a two-man job: 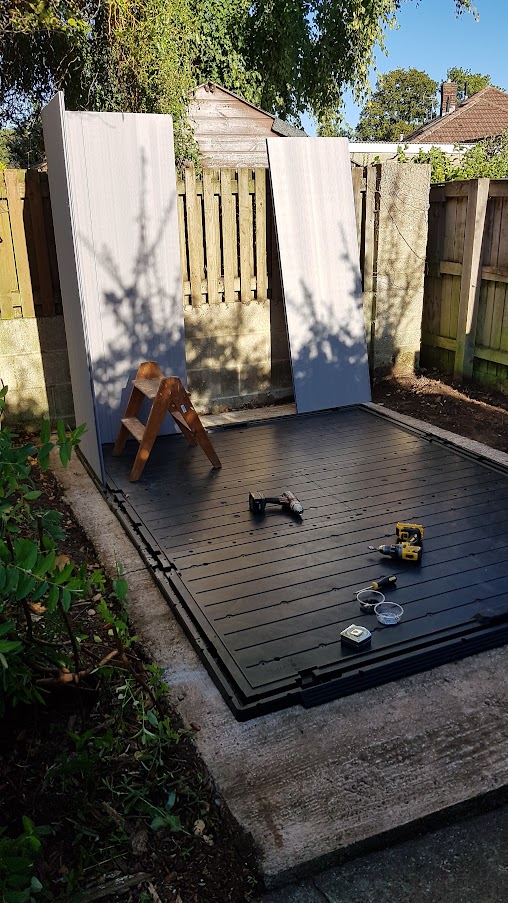 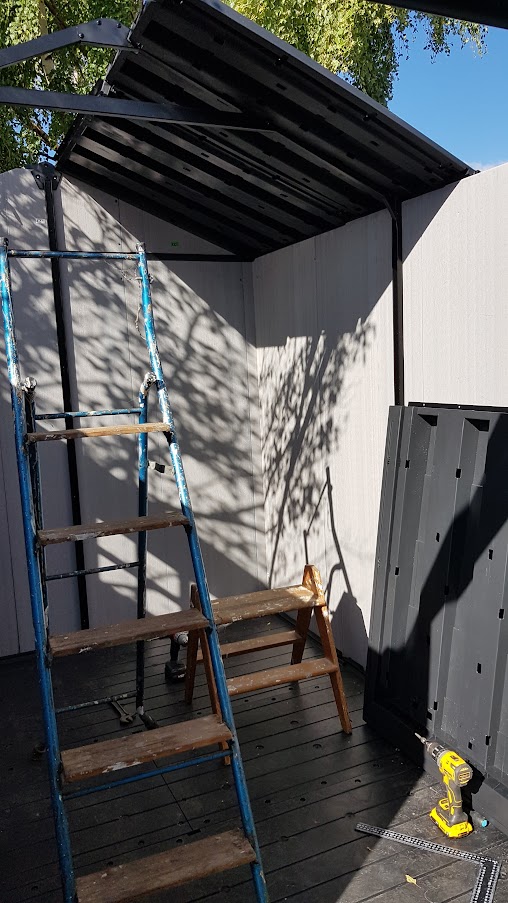 Anyway, it was completed in about a day and a half (way quicker than for a model - probably because it needed no painting, transfers etc): 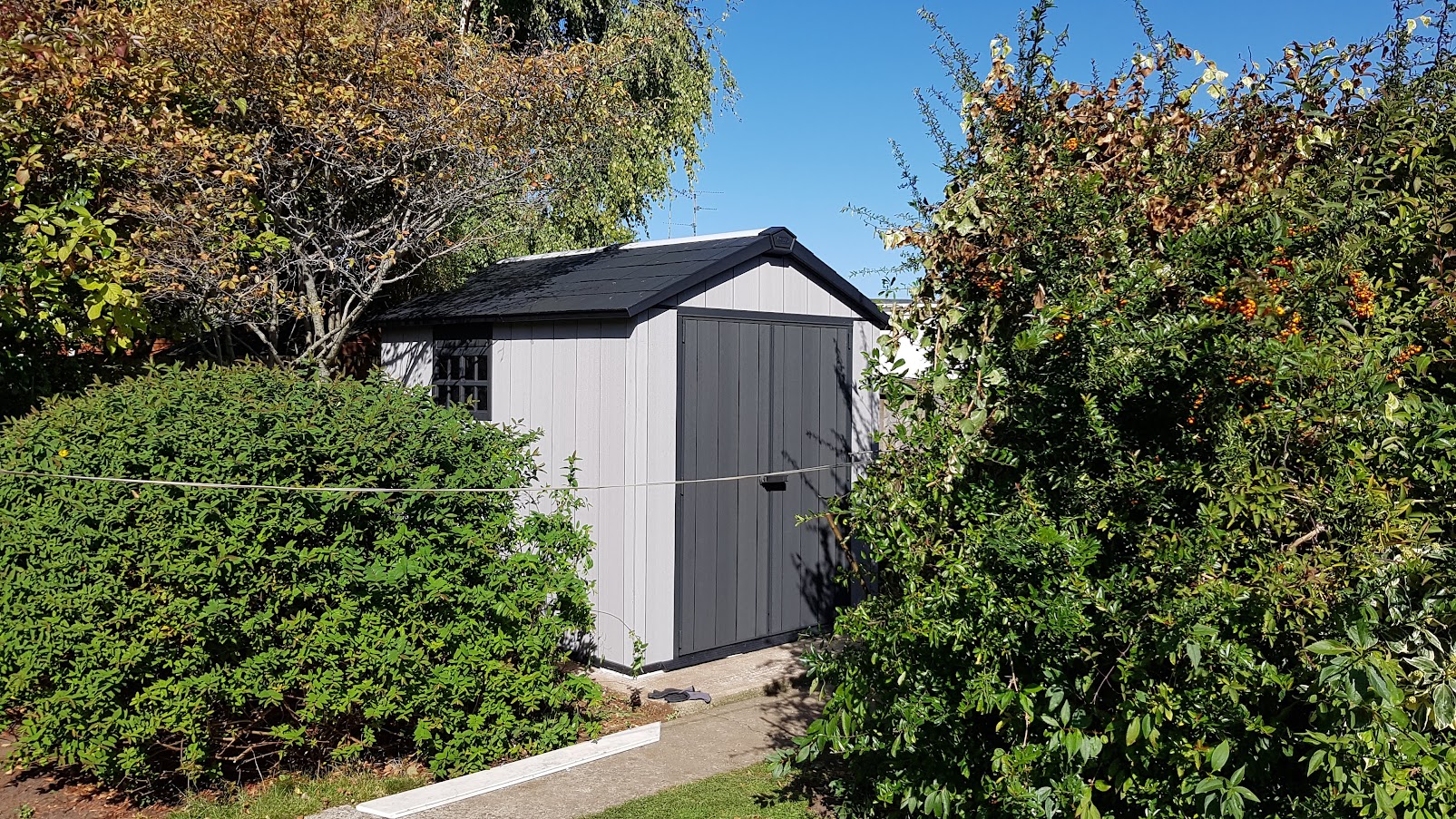 Unfortunately it took no time at all to fill 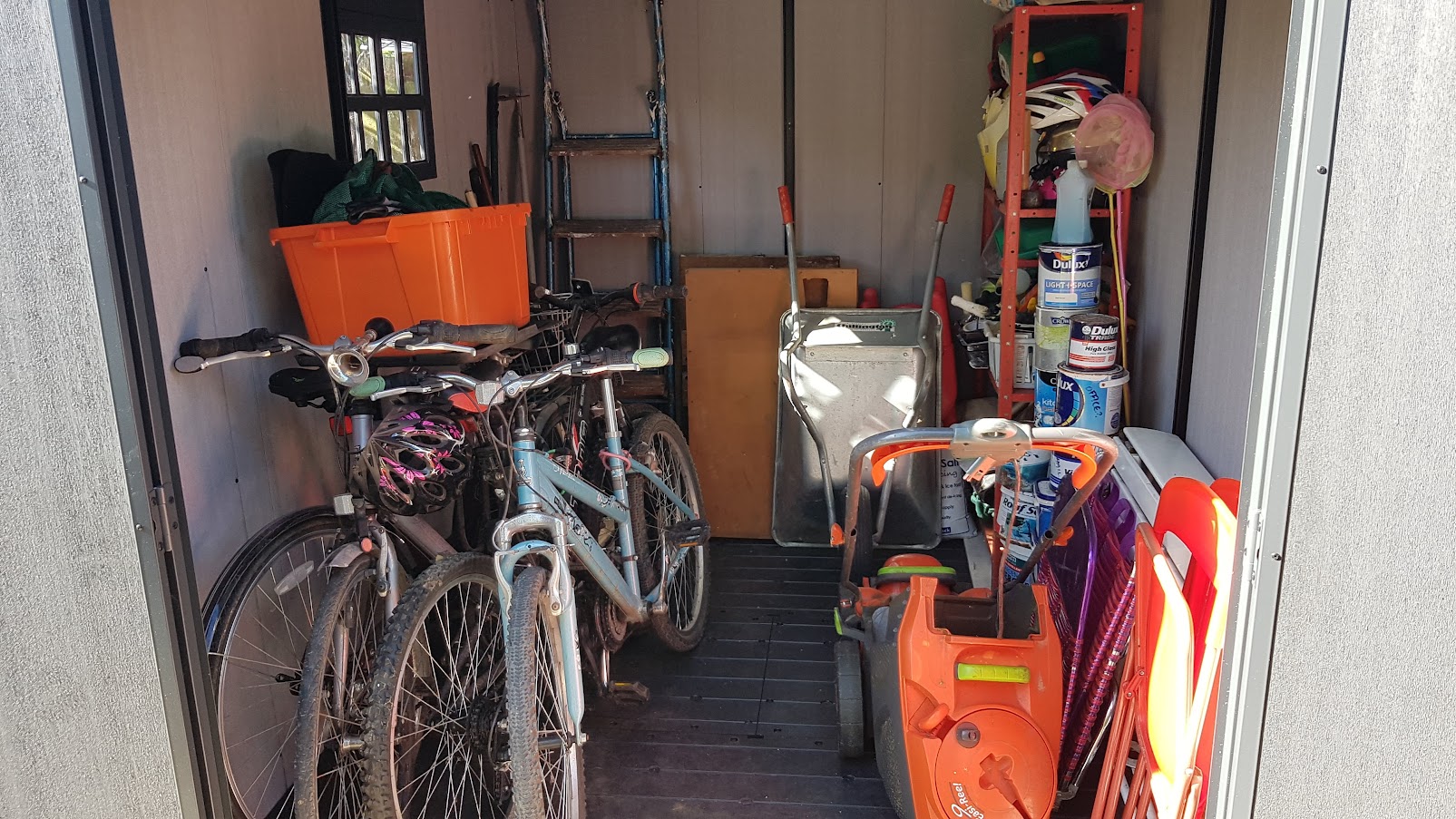 Now Autumn is almost upon us (though absolutely beautiful weather for shed construction!) I may get back to my modelling - and even finish those two 7mm scale trees I started in the last post

Everyone should have a shed! Looks great, plastic and screws at Christmas are the bane of my life and long remembered

Look forward to your off-season (as we say in Failte Ireland land) progress.

pete12345 wrote:The way you've rusted the couplings looks good too- rather than try to hide them, now they just look part of the model. I guess when it's your railway you can just decide that's what the 'real thing' uses. A representation of the brake pipe could be added to break up the flat ends if regulations require continuous brakes

I also had thoughts of adding break pipes on mine but somehow when I went to make some and offered them up to the bufferbeams, they seemed to alter my locos character. Simple and uncluttered just tends to suit my models better with hints of detail.
I don't know if PNP is considering brake pipes or not. It is an idea though.

Love the shed PNP. Shame it is not filled with trains.

Mountain wrote:Love the shed PNP. Shame it is not filled with trains.