The 10.5mm wheels I ordered for the dropdown sided wagons have now arrived, so I have a train of these - some slimrails, some T and S: 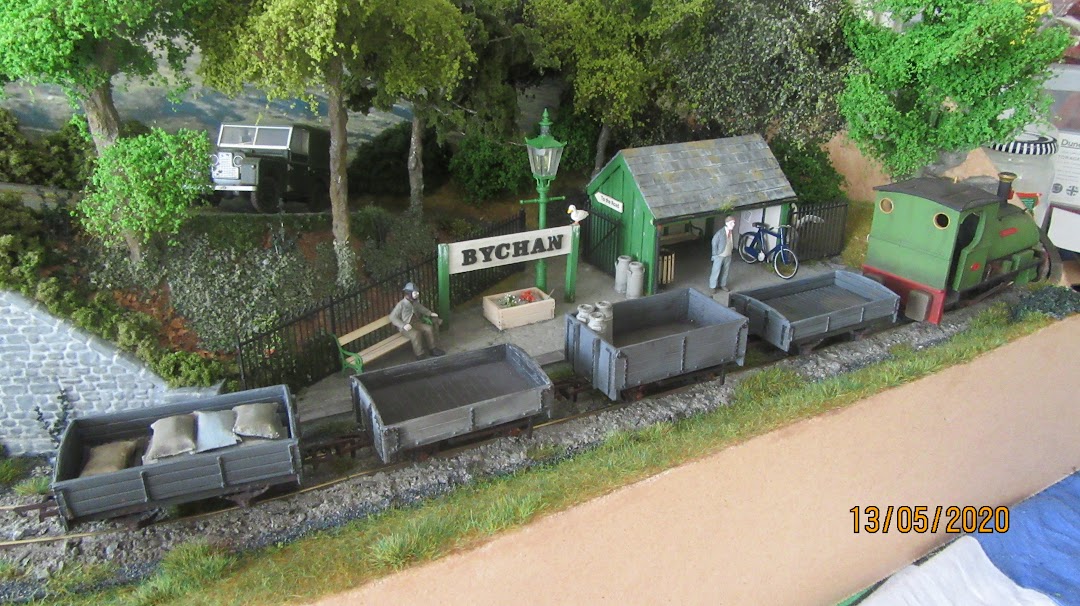 I had also purchased two slate wagons from T and S, and have now made these up. They are much larger than the Samllbrook ones I had, and a different design = metal sided. Not sure whether I really like them that much, I think brass would be a much better material for these type of wagons as the printing is too thick. Here is one alongside a Smallbrook: 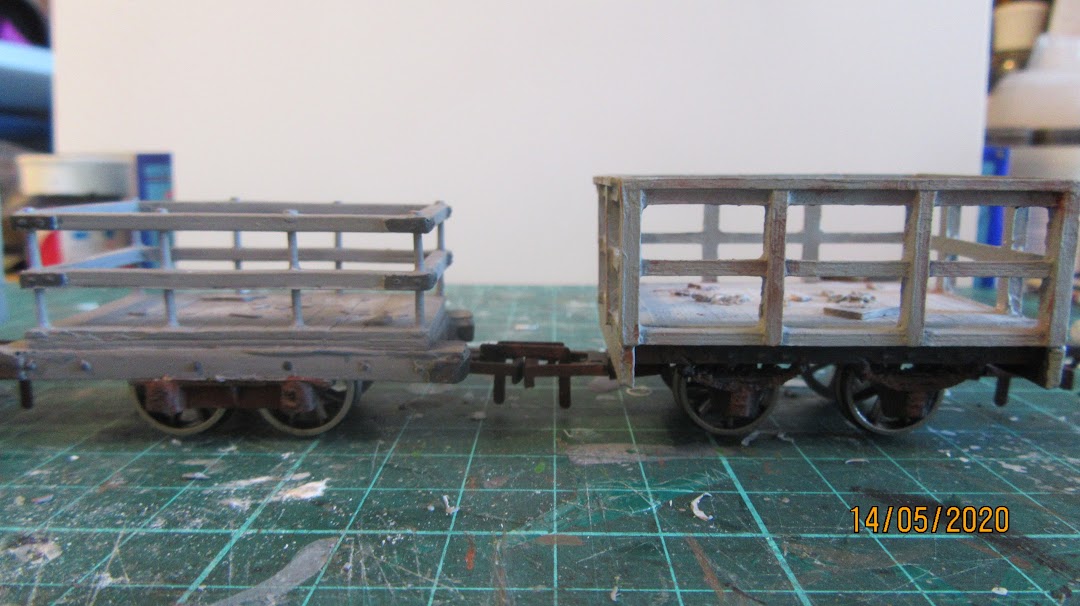 And a train of 5 is just about enough for the little Simplex: 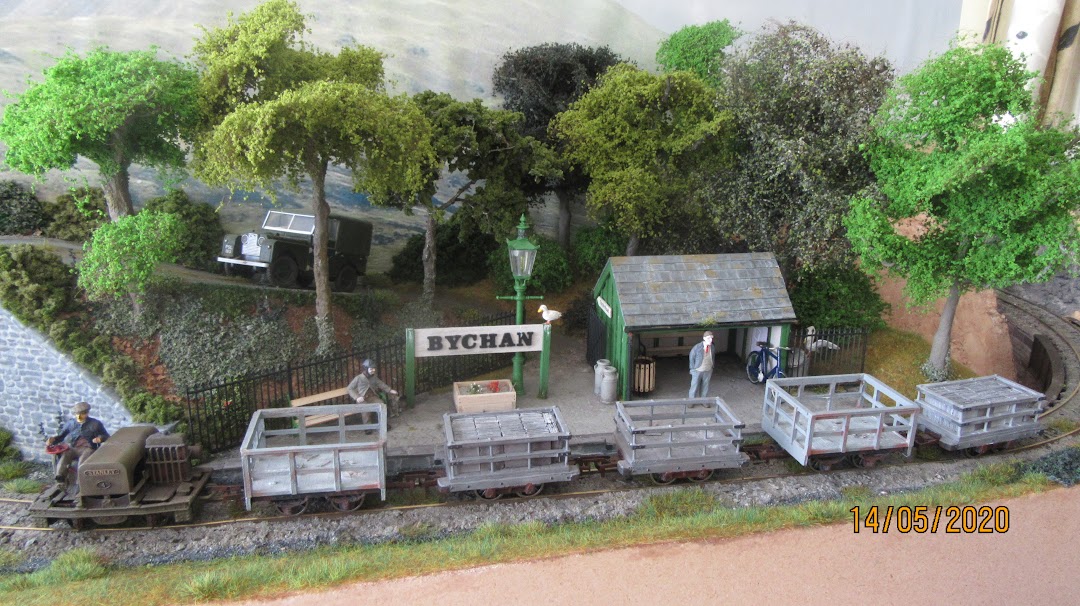 I get what you mean about the size difference, but on the real narrow gauge railways they had the common 2 ton types, and also the larger 3 ton types. The 2 ton types gained more favour as they were easier to push by hand through the workshops.

There was also a difference between the sizes of stock and even the sizes of locos intended to run on the mainlines and the industrial branches off the main lines. Some of these locos (When after preservation cabs were added) look outwardly similar except when one goes to park one of the smaller ex.industrial types next to one of the types used to concentrate on heavier mianline running trains.
Take a little quarry plank waggon just for taking supplies back and fore. They were tiny. But take a plank waggon which was designed foe general use along the main running lines and they were much wider and almost twice the size. Even those looked tiny compared to standard gauge wagons!
But what I am saying is that though at first it may look odd, the different sizes and designs were all part of the character if what could be see passing on a typical narrow gauge railway.

Going back to the three ton slate waggon types. The idea was that they could take more slates without being too large to be used in the quarry systems, and thus saving space when a train of them was taken along the mainline to the transhipment sidings which could often become over run with waggons. Unfortunately they did not take into account the weight of pushing the things in the slate cutting workshops!

But to add, the 2 ton and 3 ton ideas was not new. In the early days of the horse drawn tramways, the same idea about building 3 ton instead of 2 ton waggons and thus saving on siding space was tried, but the cost of the railplates breaking meant that they decided to go back to the 2 ton types after all!
Top

Now that 422 Modelmaking do complete coach kits, as well as the body-only version I had constructed previously, I wanted to try one of them to compare

This the resulting third class coach: 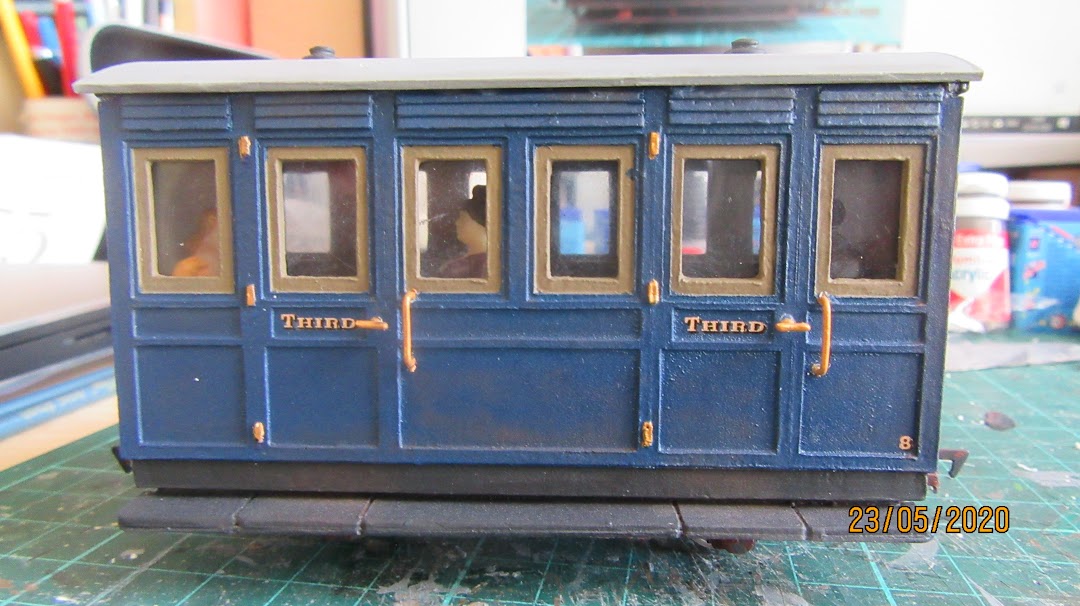 The side panels are identical, but the whole coach is slightly wider and the step boards are much more prominent - I guess previously they were 4mm scale (part of the Hornby chassis) so they should really be bigger. The kit comes with chassis and wheels, though couplings must be supplied by the builder. Width-wise this model now sits inbetween the body-only version (left) and a Peco coach (right): 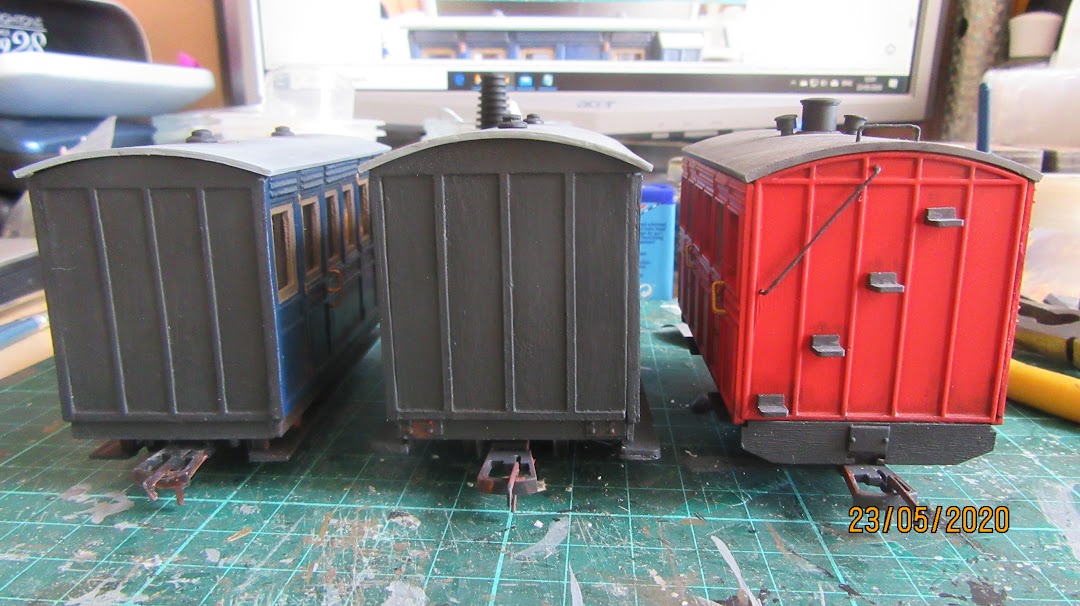 In a train with the others it does not look out of place (the second coach): 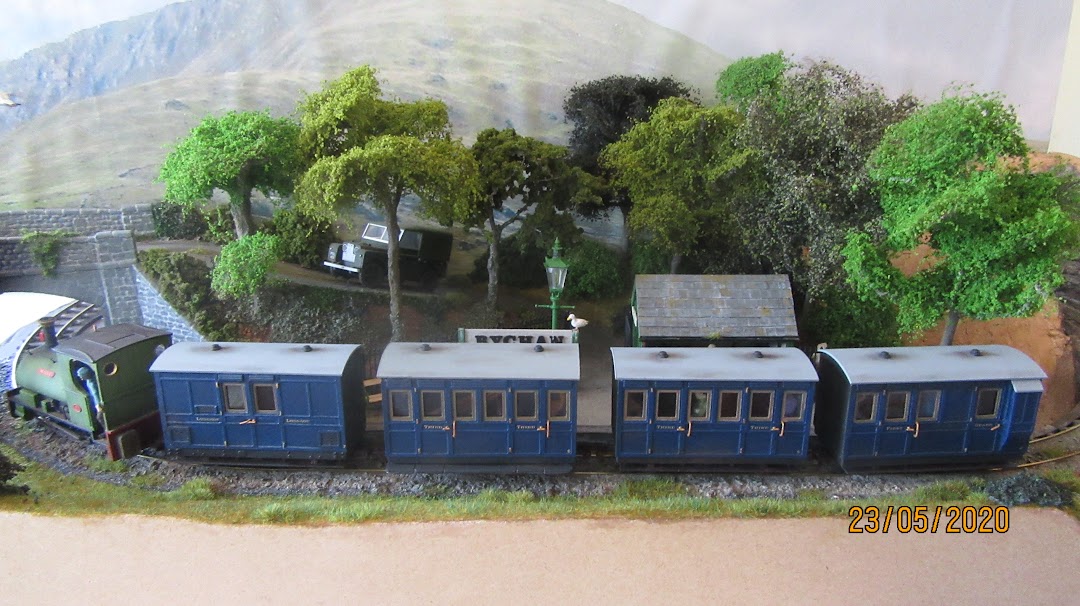 Soo tempted to buy some!

The next project on my workbench was going to be a tram loco from Avalon Lines which looks like this: 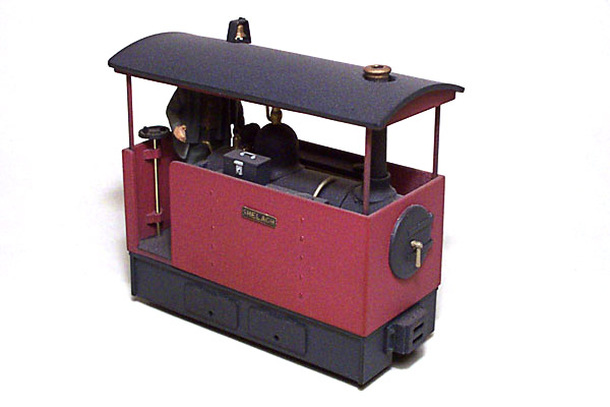 but unfortunately they are no longer trading

But I then I got to thinking that the body of this loco is about as simple as they get, so why not try scratch building the body instead (a first for me)? I could mount it on a spud or similar.

I found a vitamin tablets tube which could do for the boiler (slightly larger diameter than ideal, but only by a couple of mm) and the rest could be built up using plasticard. So first I decided to make a mock-up out of cardboard to test out dimensions and proportions. I had to scale it up slightly from the Avalon Lines model = 65mm long by 30mm wide - though designed for O-9 (i.e. O scale on 9mm gauge) - because of my larger boiler. The below is 80mm x 40mm and I think it looks ok-ish . . .? I need a longer chimney so it can protrude through the roof. This mock-up is body only - so will sit on a chassis with skirts to hide the spud underneath. And there would be plenty of room for a decoder under the boiler. 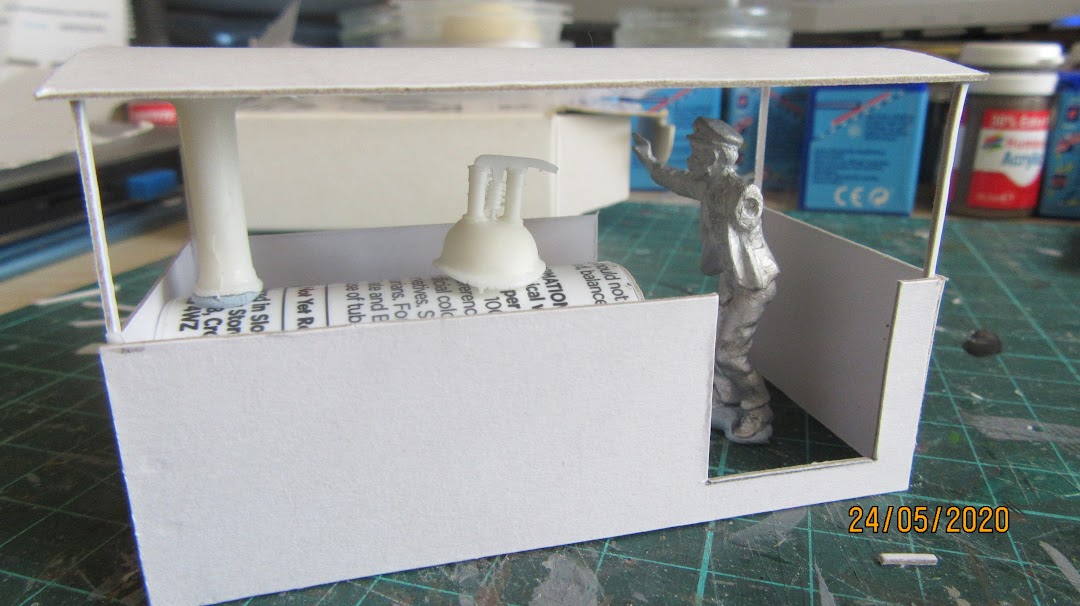 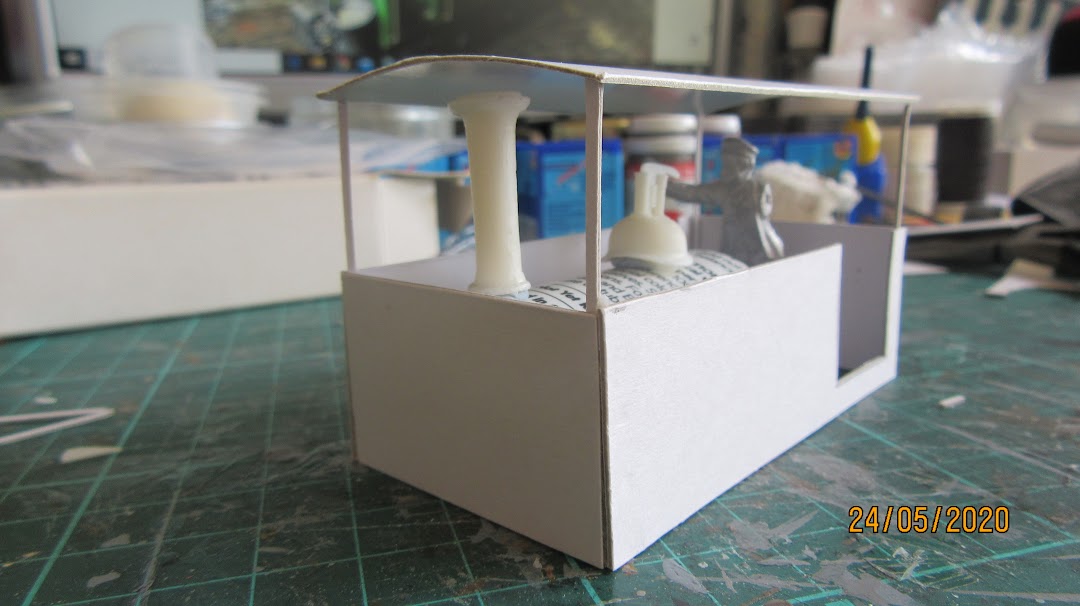 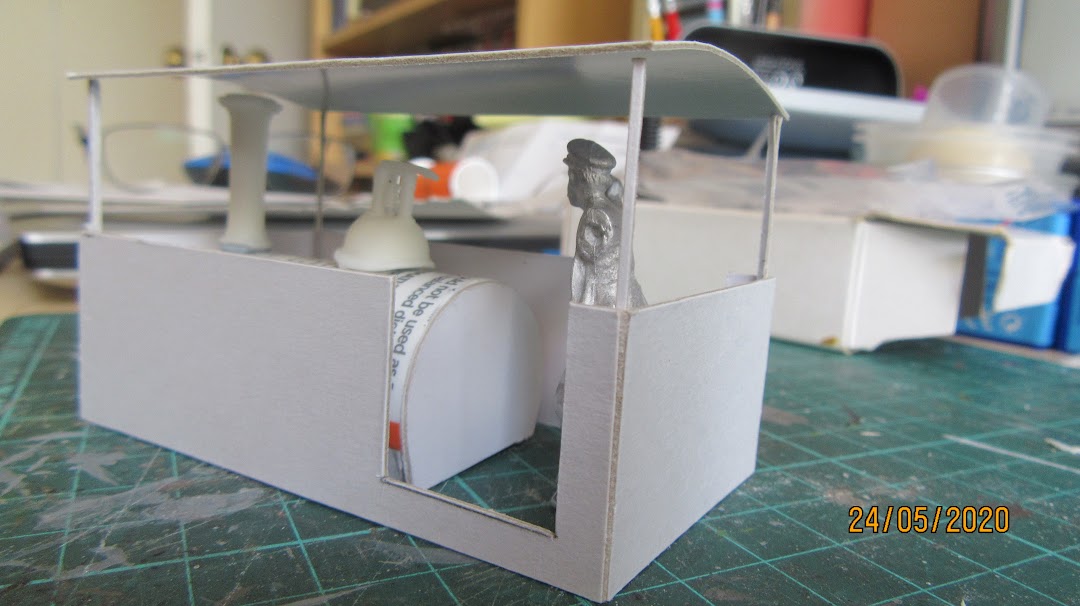 Looks ideal. Are those parts from another unmade Smallbrook kit I see?.

A few chassis will fit from the looks of it. Even a reversed Hornby 0-4-0 may squeeze into there (One without piston rods?).
Top

Yes, the dome and chimney are from Smallbrook; well spotted 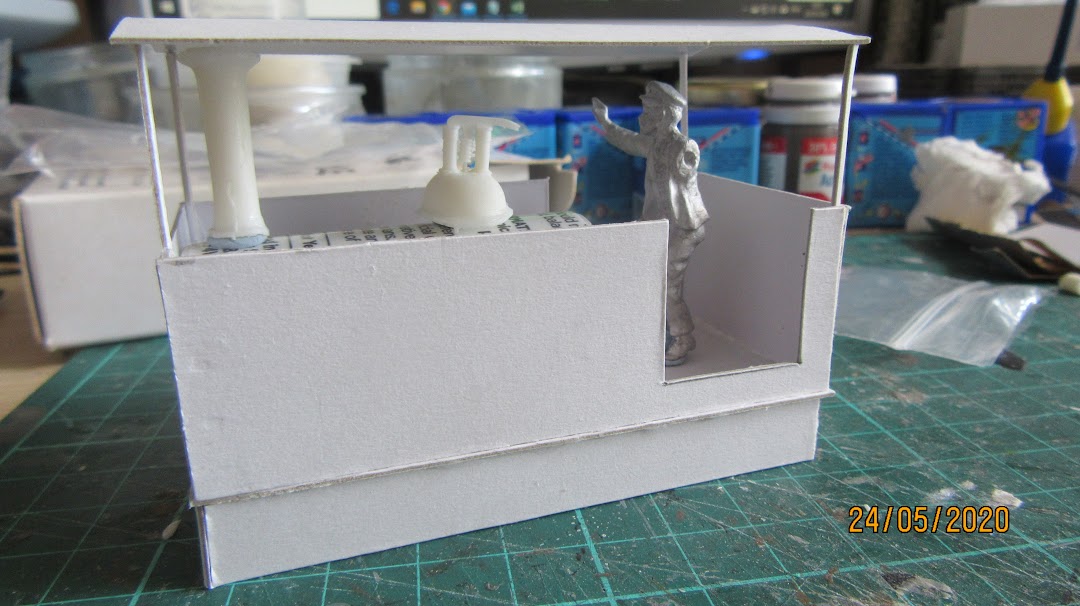 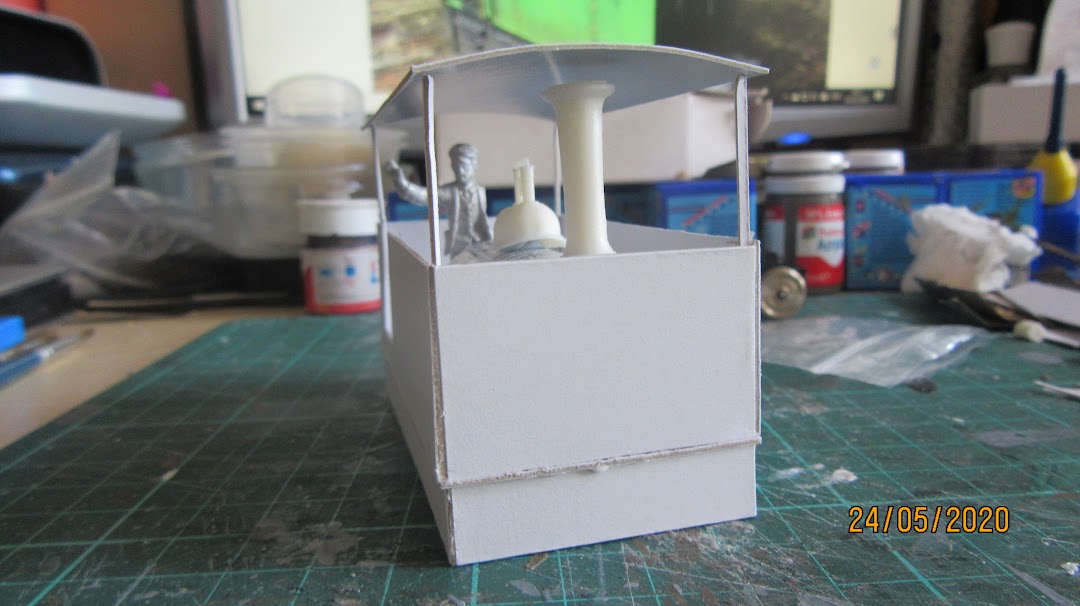 OR, with the boiler raised so that the chimney protrudes through the roof: 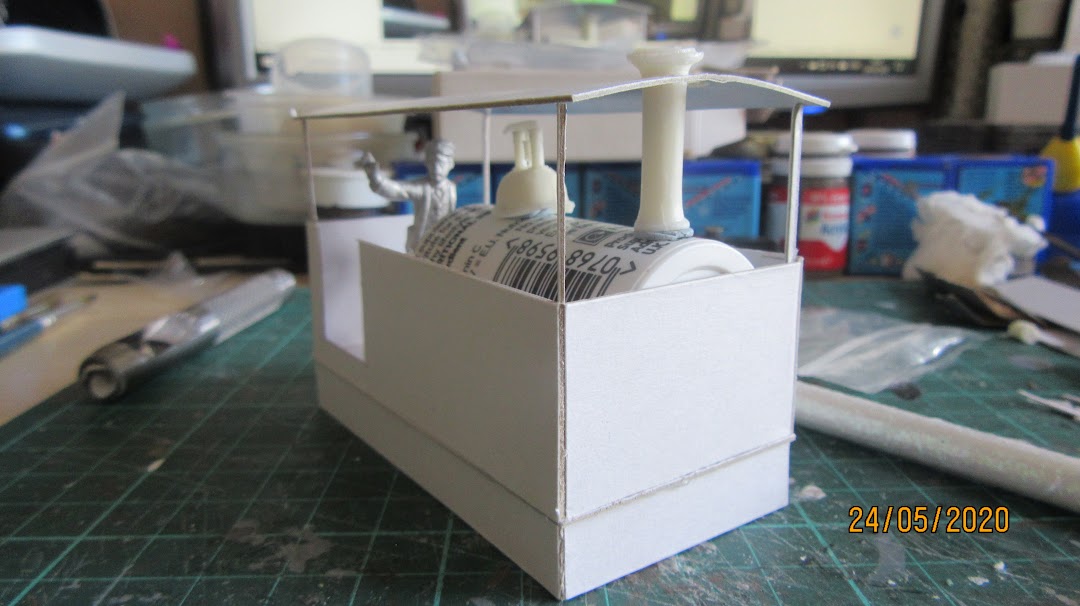 Following on from my cardboard mock-up, work has started on the real body; using nothing more than different thicknesses of plasticard, the vitamin tube and the end of an aerosol lid 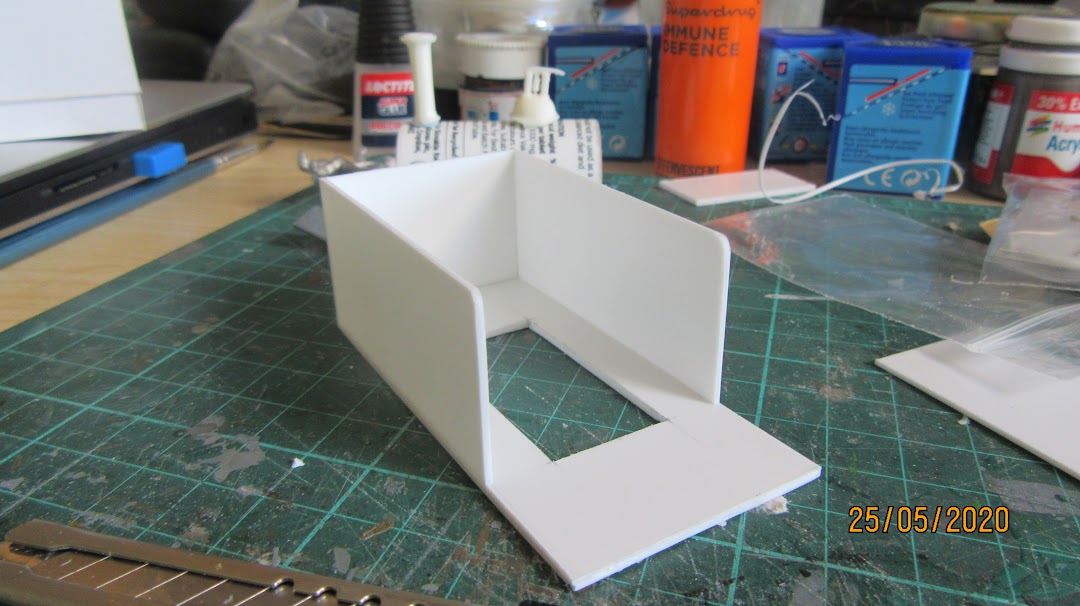 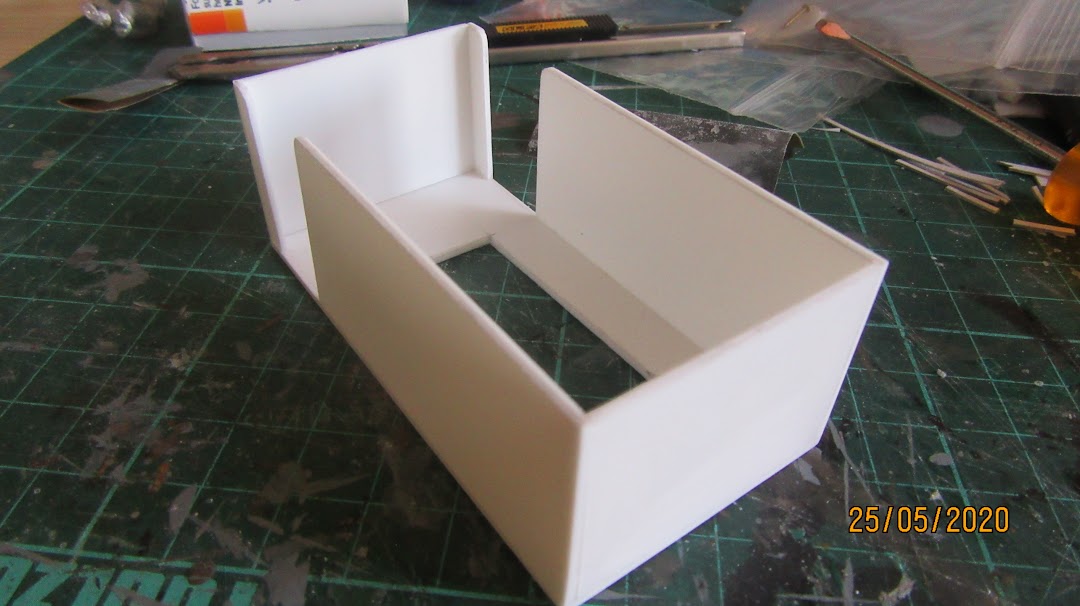 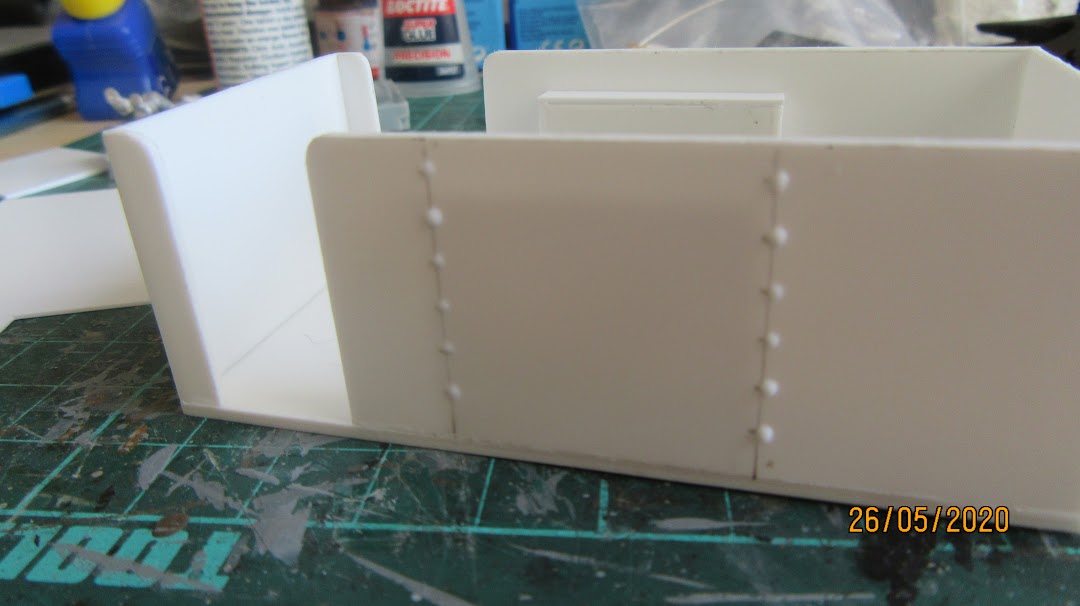 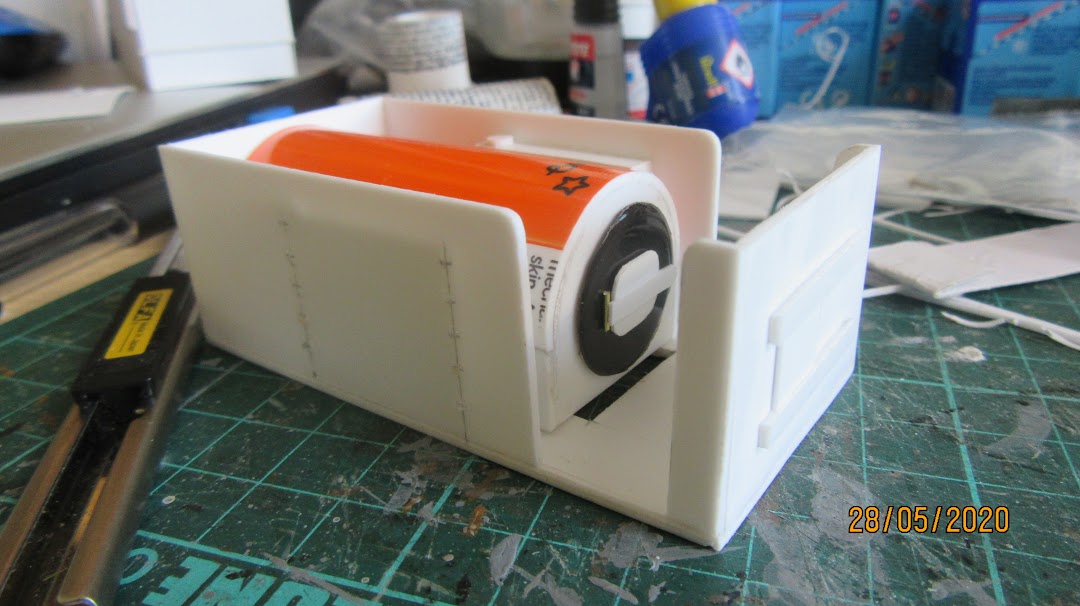 The rivets are dabs of PVA - an attempt to break up the slab side of the loco.

I have ordered a power bogie from Locos N Stuff but it has not yet arrived, so the cut-out for it and exactly how it will be fitted, are still outstanding. I will also not add the skirts until I know how it will sit on the chassis...
Old N layout
0-16.5 workbench
Micro 0-16.5 layout
Top

Making rivits. One can punch the material from behind or use a pointed soldering iron or a heated nail or wire etc. , but do some experiments on scrap pieces of material first. I only mention this as you may find it useful. Most materials one can simply punch from behind.
Some of the more awkward shapes to form are things like louvres and similar shaped vents.
Top

The plastic sheet I used was way too thick for any kind of punch, so that's why I opted for PVA dabs to represent rivet heads; it seemed to work OK and was of course very easy and quick to do! Will have to see what it looks like when painted . . .
Old N layout
0-16.5 workbench
Micro 0-16.5 layout
Top

The power bogie I ordered from Locos N Stuff arrived. It has wheelbase of 24.5mm and wheel diameter of 9.5mm - which I decided were appropriate dimensions for my little tram loco. It arrived with the wiring brought up above the unit (as requested) to make adding a decoder as simple as possible (just un-solder the two visible joints and connect the decoder to motor and pickup wires): 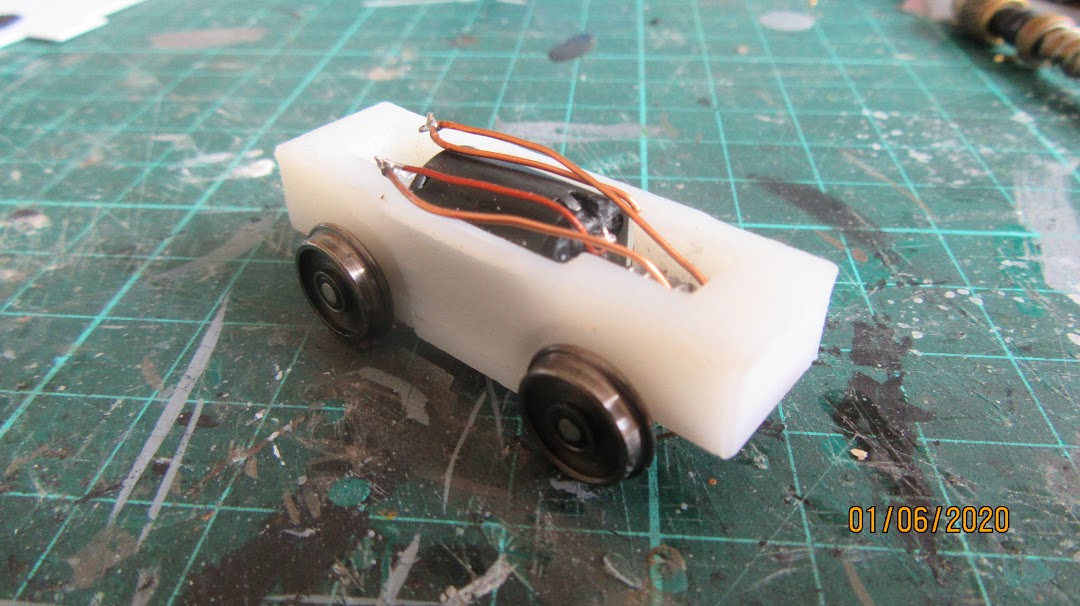 The bogie ran nicely on DC (if a bit fast) and I let her 'run in' a bit on my circle of track on the (stripey) carpet!

I cut a mounting plate from plastic sheet and attached to the top of the motor block with superglue. Holes (with a bit of play for final adjustment later) and nuts/bolts attach to the body: 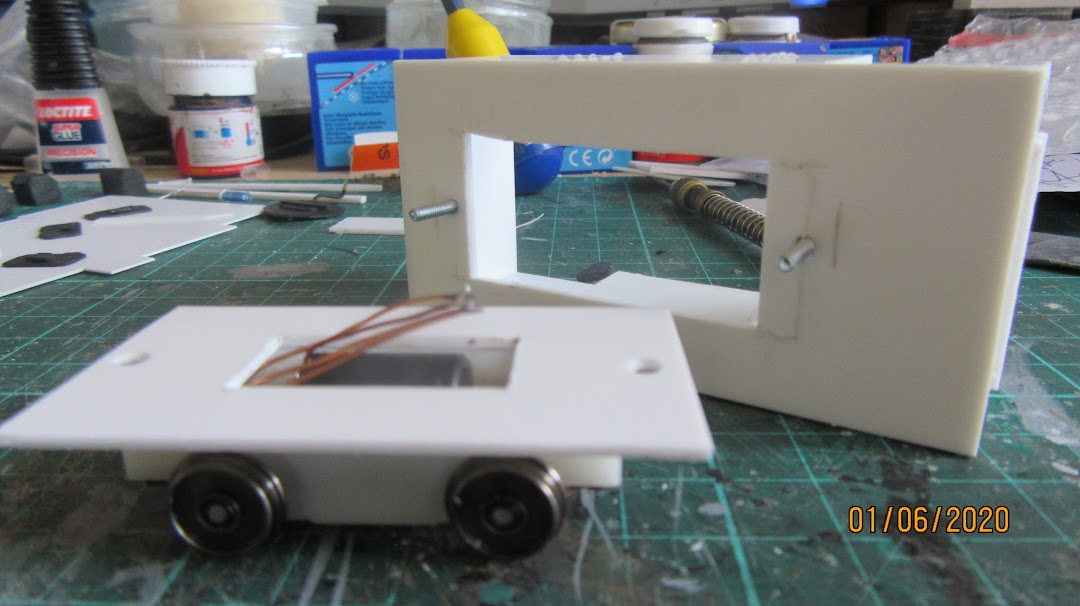 With the body sitting on the bogie (looks a bit strange until the skirts are added): 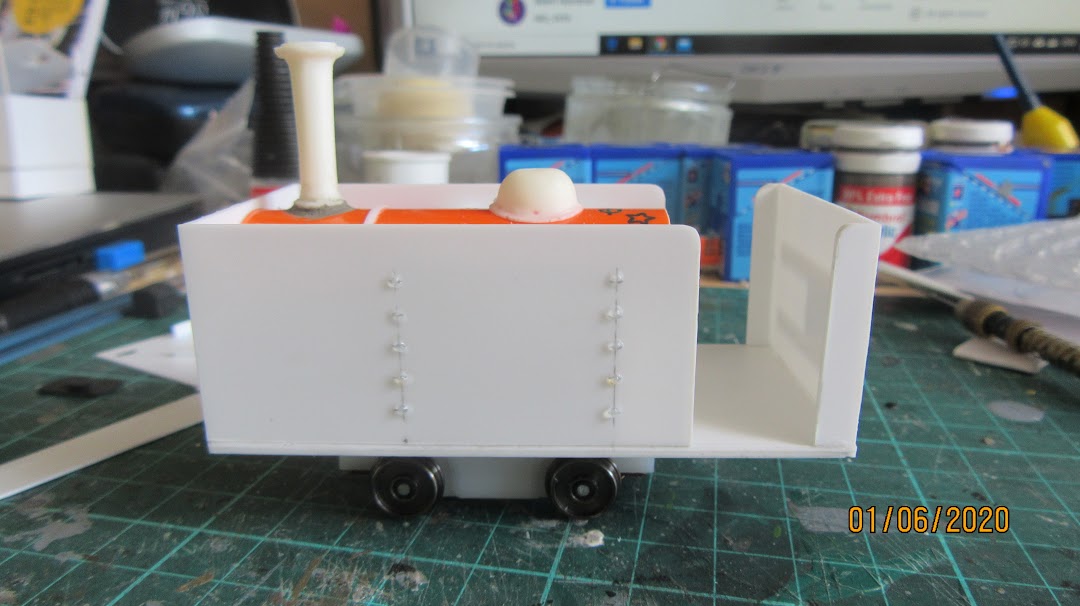 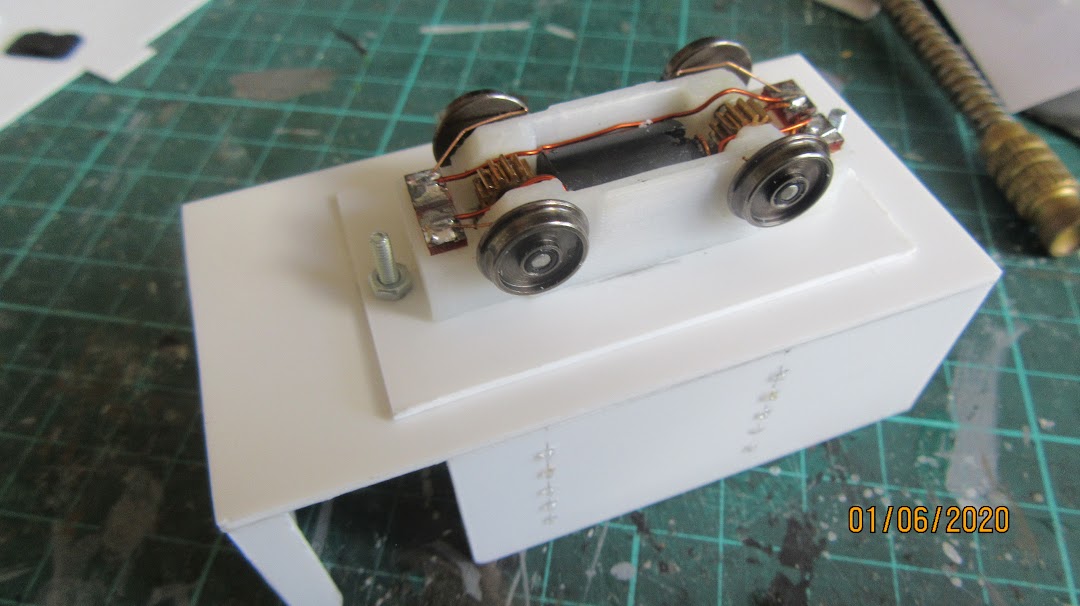 I had purchased a TCS decoder for this loco. These are now only available direct from TCS' own new UK sales office. I found they now do a KAM4, which is a decoder with on-board stay alive in the single package. It still claims to keep a loco running from 6 to 15 seconds after power has been lost from the track. It is much smaller and cheaper than purchasing two separate units which I had done previously. So I soldered it to the bogie wires and gave it a try - seems to run fine, though slightly smoother in one direction (which will be 'forwards' for my loco!): 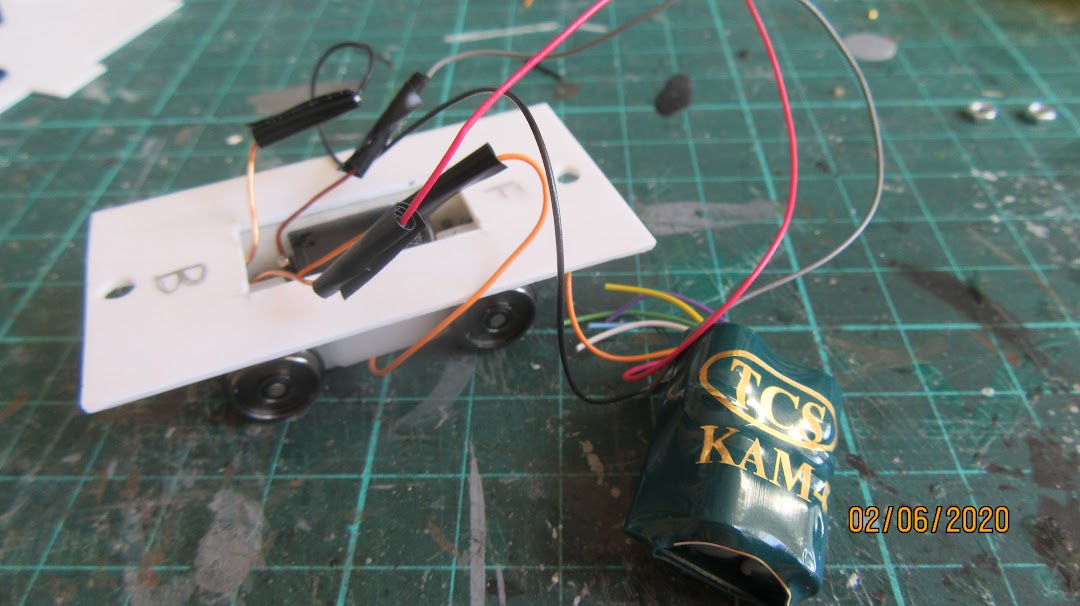 It looks excellent. It is amuzing when the decoder is larger then the motor and gearing. I can see why you need a compact drive.
I like the way you have the chassis bolted on to the body. It all is looking great.
Top 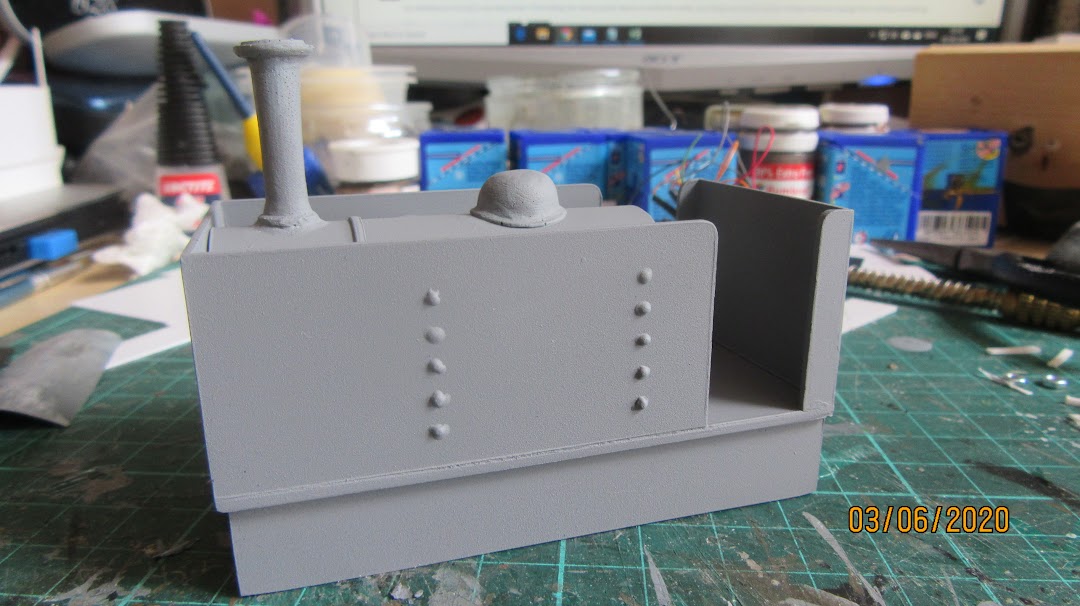 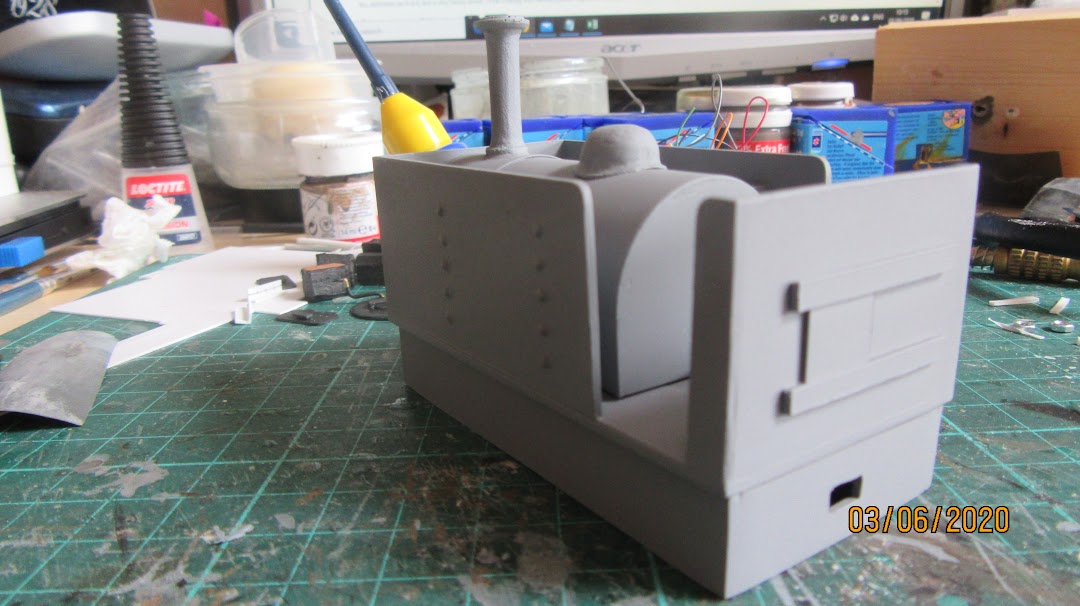 The body has been sprayed in matt Humbrol Dark Green and some details are starting to be added. Note the body is shown here off the chassis - and of course I have not started the roof yet 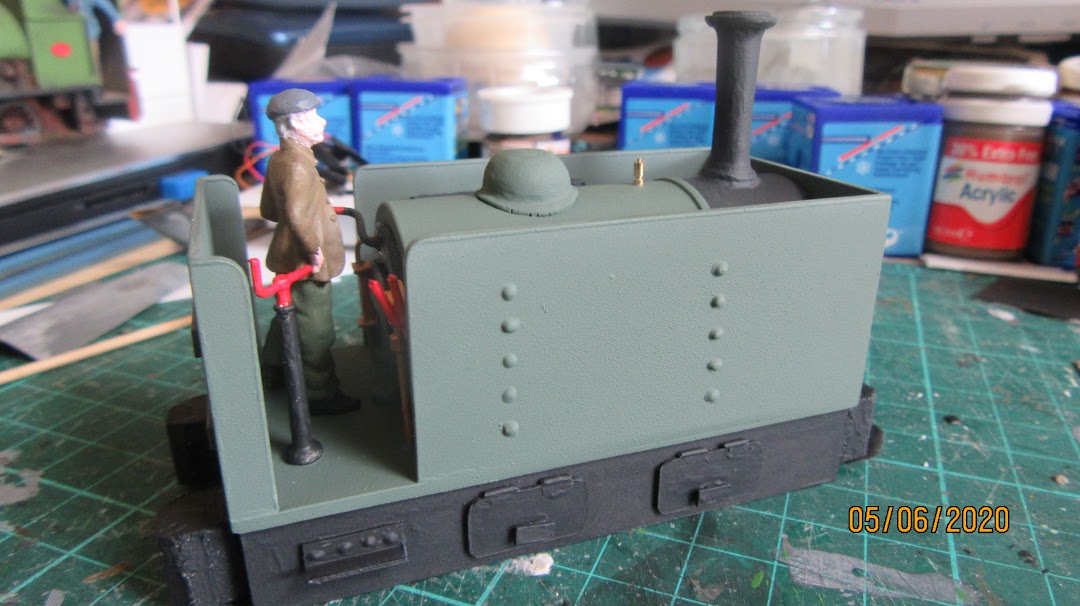 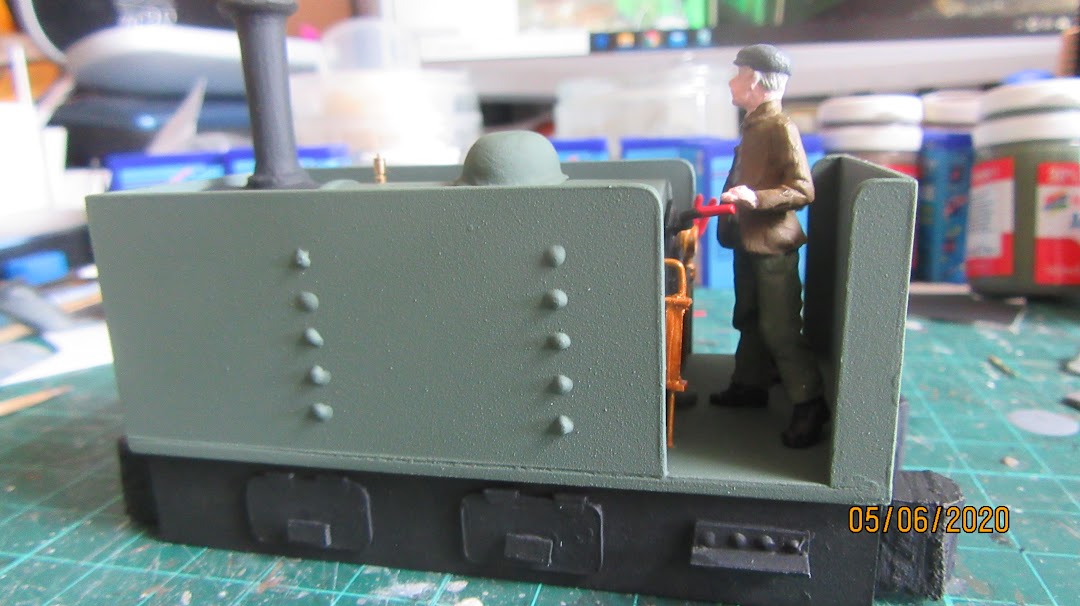