Returning for a moment to this delightful little slate wagon I built recently from a Smallbrook kit: 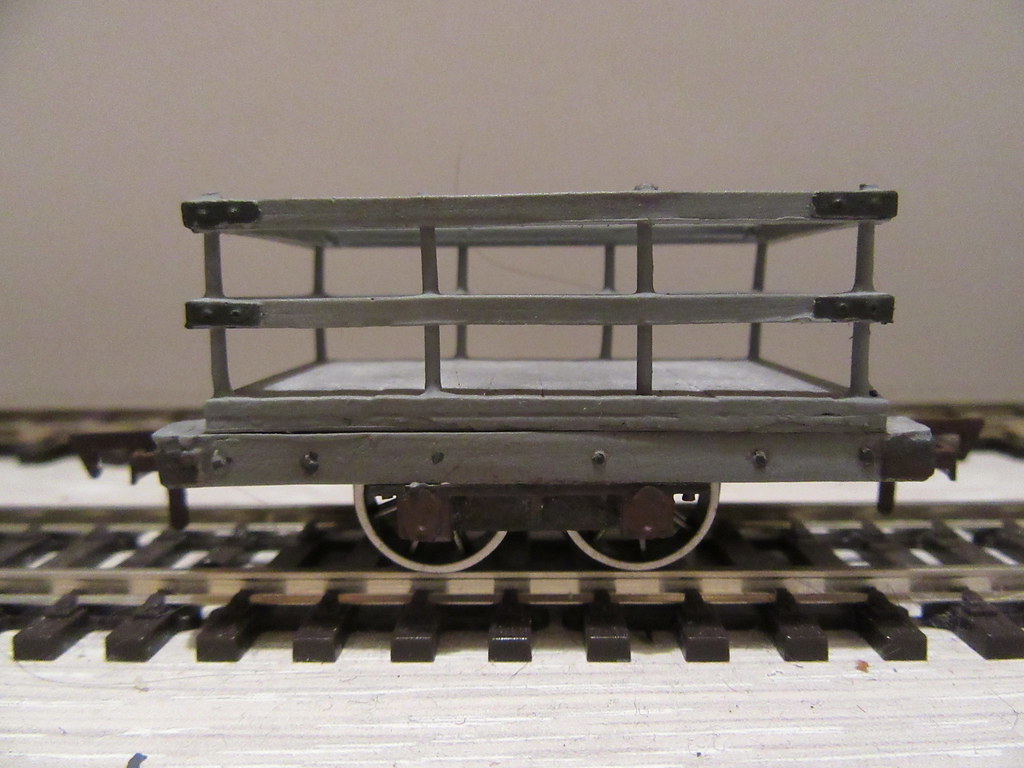 IMG_8272 by Pink Nosed Penguin, on Flickr
I found that the wheel sets have a large sideways play in them (about 2mm!) in their 'axles' in the chassis

- this has the effect of the wagon often sitting diagonally on the track! Whilst this may add yet more character (!) I wonder if anyone has a suggestion on how I could reduce this play?

@Mountain I think you said you have a few of these wagons? Do you have the same problem?
Old N layout
0-16.5 workbench
Micro 0-16.5 layout
Top

Mine are of the standard Sand and Hutton open waggon types. I've noticed they do have play, but the play is not noticeable with the axles... It is more due to the short wheelbase. I have three and they were purchased not long after the kits were first I troduced with this chassis. I think every chassis broke while I tried to clip in the wheels, which wasn't a big issue as it was easier to fit the wheels in position and then glue the broken chassis. Maybe alterations have been made since then?
Mine do have sideways movement due to the very short wheelbase. I started with one filing off the buffers ready to fit my central buffer design to them. I've yet to complete the work.
One could use axle bearings? I believe they can still be purchased under the Jackson brand name. They used to be Romford. They are known as "Top hat" bearings and come in packs of 50 in a tiny sealable bag. The easy method is to drill out the axle boxes, then slot them in from the inside, fit the wheels and find a filler to fill the holes from the outsides of the axle boxes. The harder way is to drill out them from the insides to make a suitable hole, which may be much easier to cut the chassis to get holes drilled square to drop the bearings into and then glue the assembly back together.
If one wants super rolling wheels, drill out bearing holes from the outsides, fit the wheels and dont fill the axle boxes... Dont glue them in ... The bearings and the wheel axles will be free to rotate and the wheels will spin for ages before they finally stop!
I use bearings like this as an easy way to fix any bodged work... Let's say I drill a v shape too far in... The axles are too loose. Bearings can fix this issue.
[Top hat bearings have a shoulder which stops the bearing from falling through the hole one has drilled for fitting them].
Your waggon looks ace!
Top

Now that is a cute-looking wagon.
Yes, such a short wheelbase will wobble.

The GWR broad gauge had some goods wagons which had a shorter wheelbase than the gauge. Apparently they were quite reluctant to run straight.
I can't see if that applies here, but it can't be that far off.

One fix might be to run them in pairs with a bar coupling. (Attached ~1/4 way into the wagon, I'm thinking.) That should let each feed a bit of stability into the other.

Terrific progress being made PNP. Both the diesel loco and little slate wagon look great. I get the sense you are really enjoying this foray in to 0-16.5, have you given any thought to a layout yet?

Thanks guys, I guess I was hoping there'd be a way to 'inject' something in without having to remove and refit the wheels - because, as Mountain says, the resin chassis is quite rigid so there is a very real risk of breaking it when removing or inserting the wheels

I will order some brass bearings and see how I get on fitting them . . .

carnehan wrote:Terrific progress being made PNP. Both the diesel loco and little slate wagon look great. I get the sense you are really enjoying this foray in to 0-16.5, have you given any thought to a layout yet?

I have been making a track plan for a possible future 0-16.5 layout, but some house re-organisation needs to be done first, and disposing of my table football layout - so in the meantime I am enjoying just building some locos and rolling stock

Even if you dont use the bearings on this project, they are useful things to have in your parts box in case you may need them.
Dont worry too much about trhw chassis breaking as when mine broke it was simple to use superglue to glue the pieces back together again. (For those reading this, superglue is the recommended bonding agent for these resin kits and it works exceptionally well. I once wanted to slightly move the saddle tank on one of my locos and no way could I get it off once it was stuck down!)
Top

I dont think it is too difficult to make a cab and use the rest from an 06 or an 03... An 08 also looks an interesting donor loco to enlarge the cab. I've seen a kit somewhere that converts an 08 to narrow gauge but I think it may have been in 009 gauge. The same principle can be done in scratchbuilding.
For most of us who have a general idea how to put things together (Some modellers may struggle here at first!) there is not a huge difference between kit building and scratchbuilding. I say this, as with some kits one has to gently file out excess flash from windows etc. So those who've made kits are already half way there... Those who have not, give it a go! Start on an old cheapie loco and see what you can build! If it doesn't quite work out, try again, maybe with a different angle of approach. Find what works for you!

Many locomotives have great potential for use as donor locomotives. I've even seen large bogie diesels made into narrow gauge locos. I tend to look for 0-4-0's and short wheelbase 0-6-0's due to their ability to take sharp curves. 2-6-2 chassis has also been used to make convincing narrow gauge locos.

Quite a few kits can be adapted to run on different chassis, though it may take some trial and error! For example, when I decided to mount one of my Smallbrook Studio body kits onto a Triang chassis instead of the Hornby chassis it was designed for, I had quite some work to do!

It was a type of job that while slowly trying to cut and grind the cast metal chassis which isn't an easy process... I was thinking if it would take me weeks! Fortunately it took me about two days of doing bits at a time untill the work was done. Didnt have the patience to keep going and doing it in a day!
Top

Dave wrote:I really like your 'Ronald' build, I am just wondering if the body could be hacked around to fit a bigger motor, like a 00 Class 06 or even a Class 03.

. Yes this kit has definite possibilities in this regard (and is excellent value at only £15) - there is loads of room under the 'hood' (where I have stuffed my decoder and stay-alive) and some of the cab area could be used too, depending on the shape of your chassis, if you cut out the front of the cab where it joins the hood (and are happy to disguise any part of the motor protruding into the cab). The kit is available from slimrails.
Old N layout
0-16.5 workbench
Micro 0-16.5 layout
Top

Ronald now has handrails fitted and painted, but is awaiting name- and number-plates and weathering: 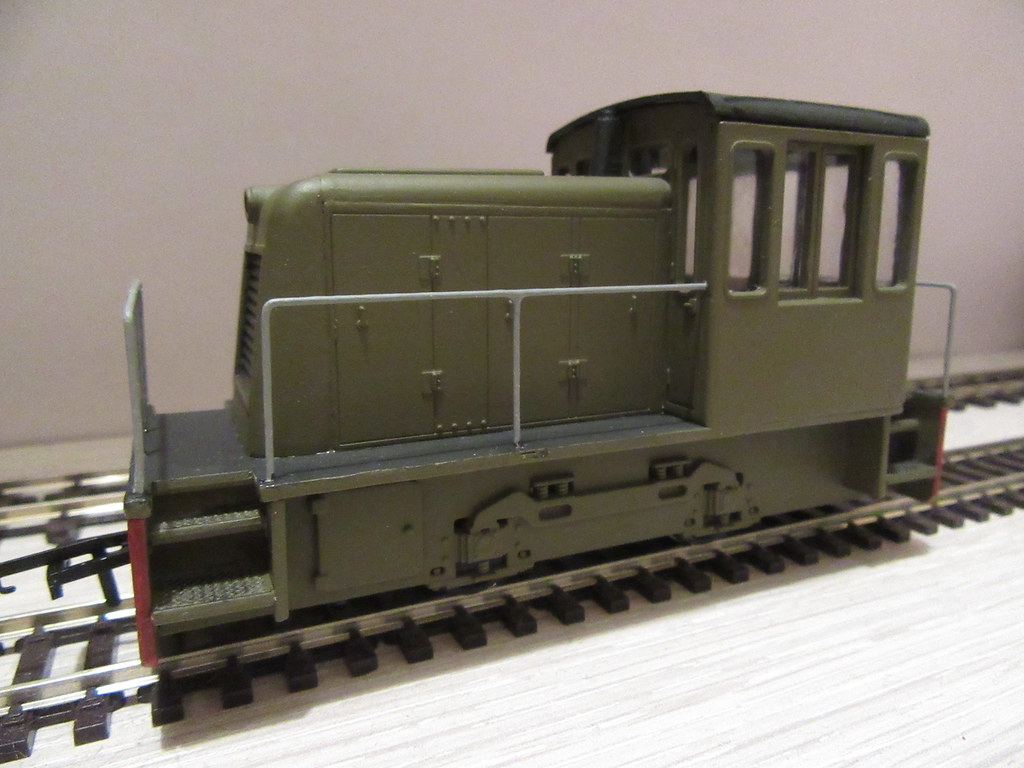 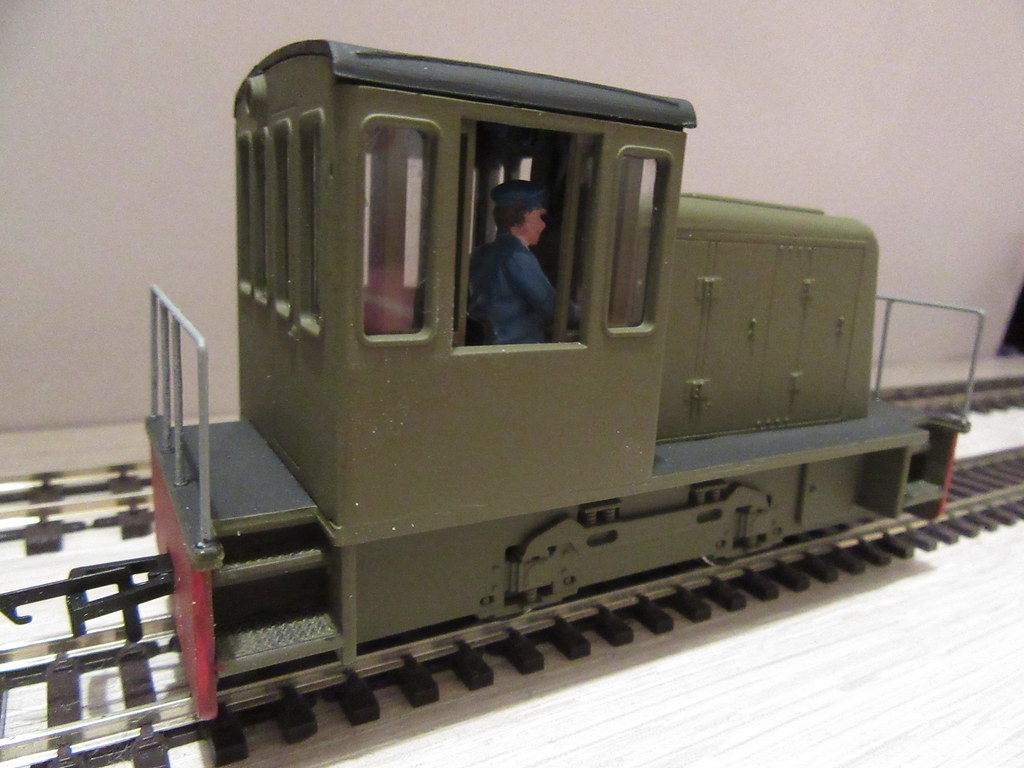 And here he is with Mabel - where he looks far too clean!: 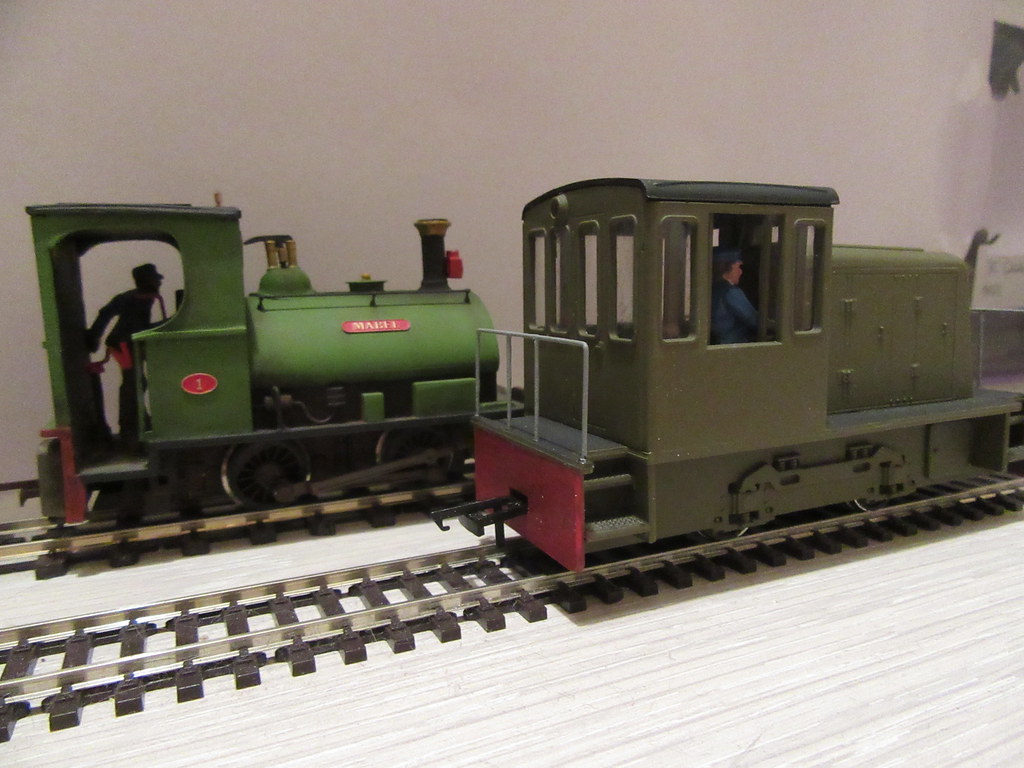 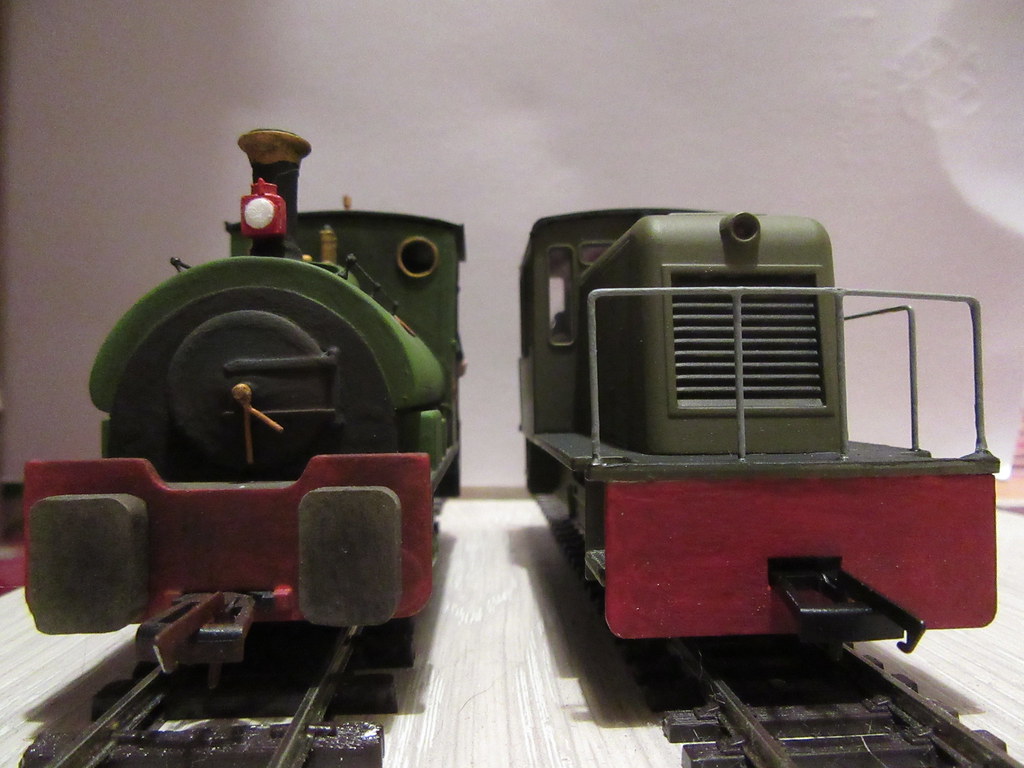 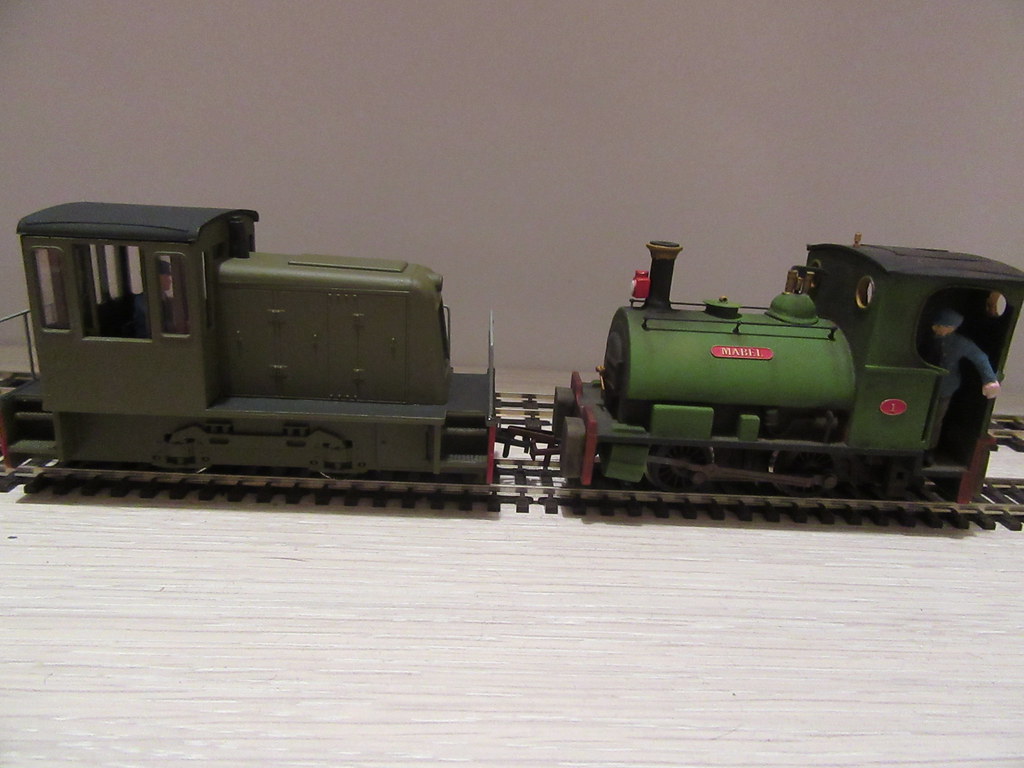 Very nice. You could do with more wagons to go with them. I'm at a stage of three locomotives built, (A few more loco kits not yet built!) and yet not a lot for them to pull. Hence why my modelling efforts turned to building coaches for now, though I find I prefer to build now and then rather then a full concentrated effort.
Top

Mountain wrote:Very nice. You could do with more wagons to go with them.

Agreed! But then I could also do with a layout to run the locos and rolling stock on

Ah yes. I need to do more of that as well!

Back to my little slate wagon, I received the small bag of 50 top hat bearings I had ordered from eBay, so tried drilling out the holes in the wagon chassis to accept them. They went in ok on the first axle - here's one in place and a second bearing waiting to go in: 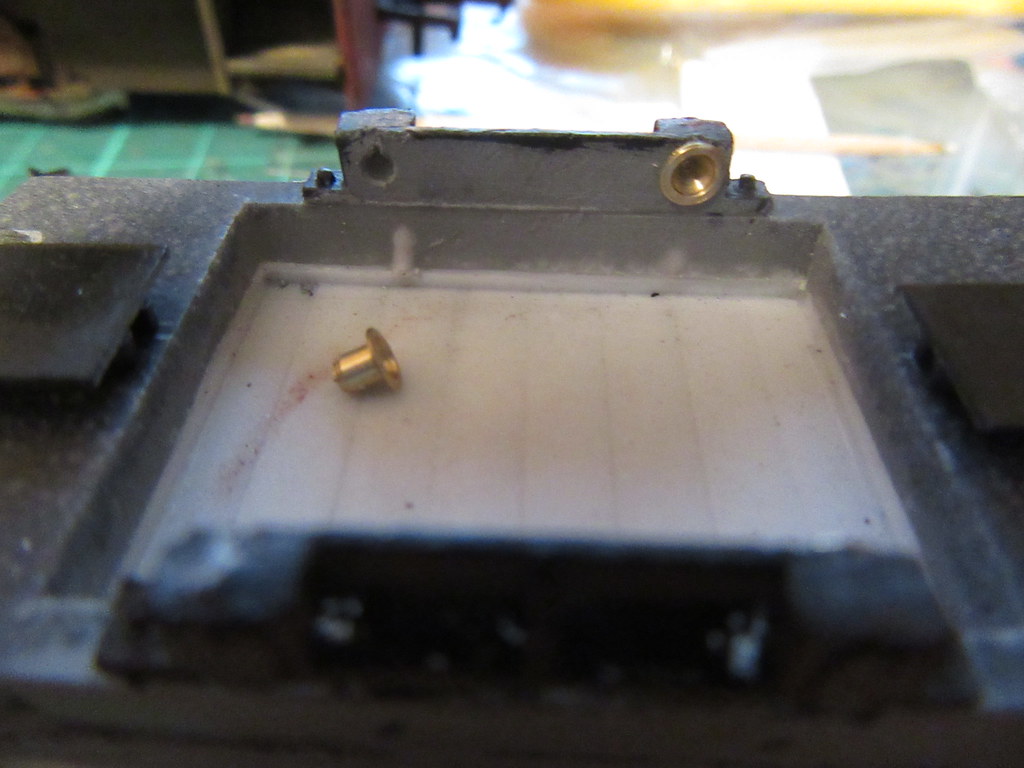 .
So I removed the bearing from one side and then the wheels went in quite nicely with hardly any sideways play

But unfortunately the second side I had drilled out is now a rather sloppy fit.

For the other wheel set, I only drilled out one side for the bearing and the wheels are not sloppy, but a little tight, and not as free-running as I would like! Oh well, I adjusted the wheel back-to-backs to allow for the axles being closer to one side of the wagon than the other: 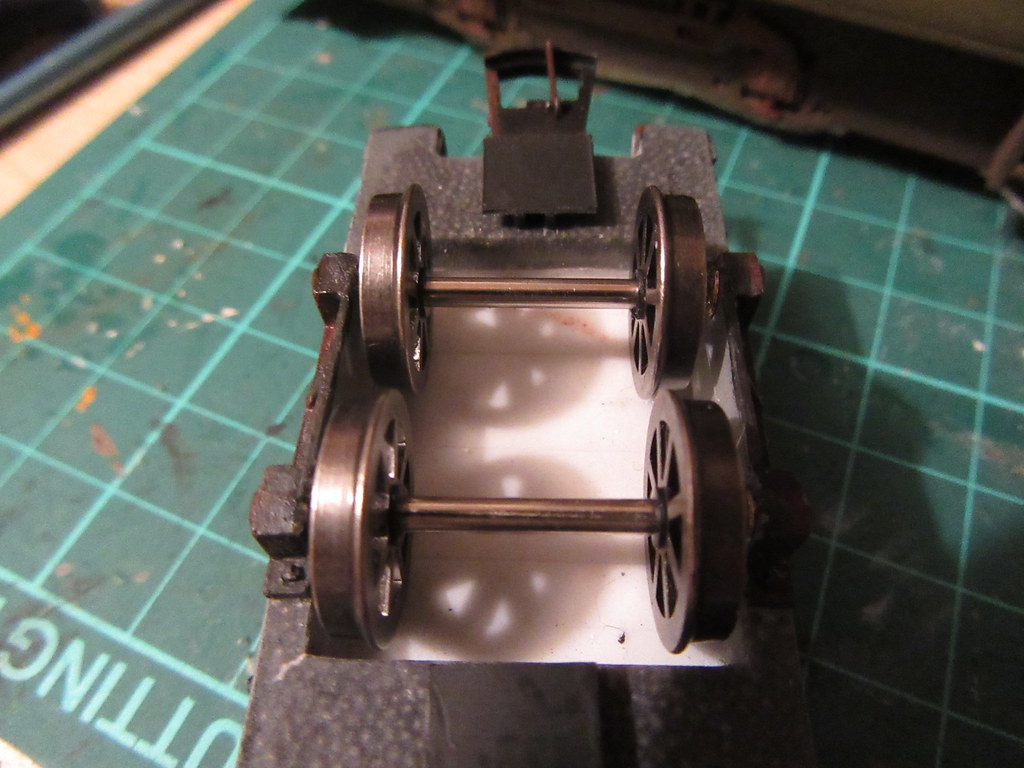 So now the wagon is a little better than before, but not perfect. But I've learnt what needs doing for these wagons so I'll do a much better job on the next few I buy

Could you file down the edge of the bearings on one side and push them in from the outside? Just an idea. Another idea is to split the chassis in half to fit the bearings, and then glue it back together again.
I've found these bearings can give very good running once set up right. I found they also give an interesting realistic squeel if left for a good while without being used! A tiny dot of oil and they run quiet again. Is interesting.

Ronald is now complete with plates and some weathering: 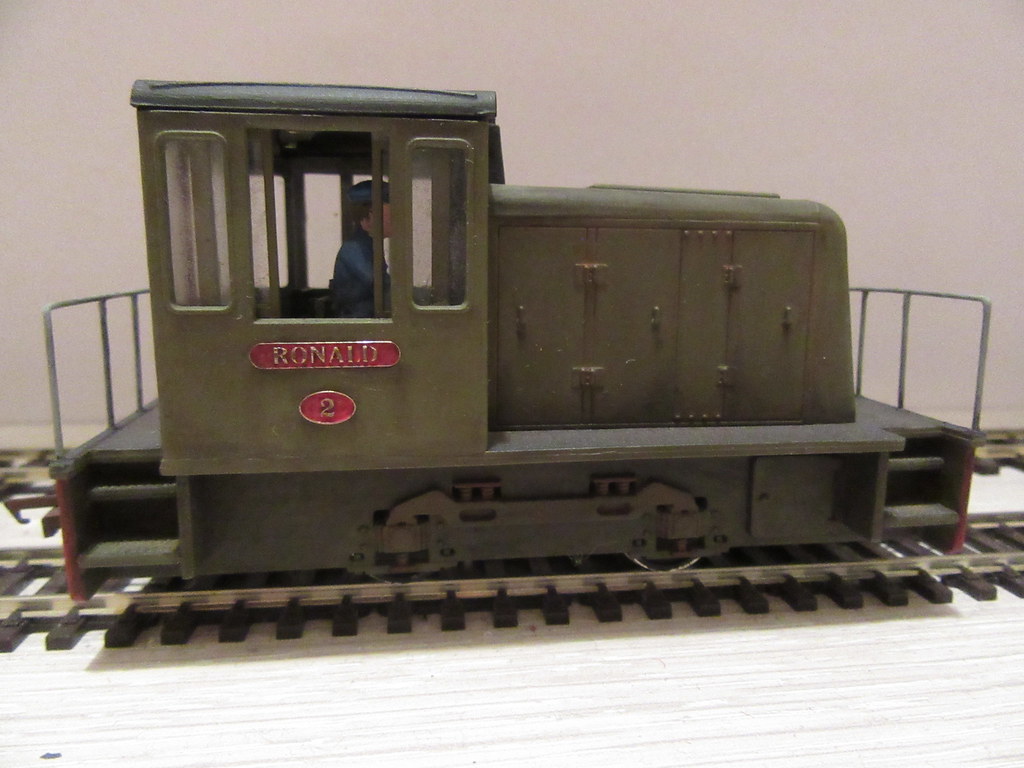 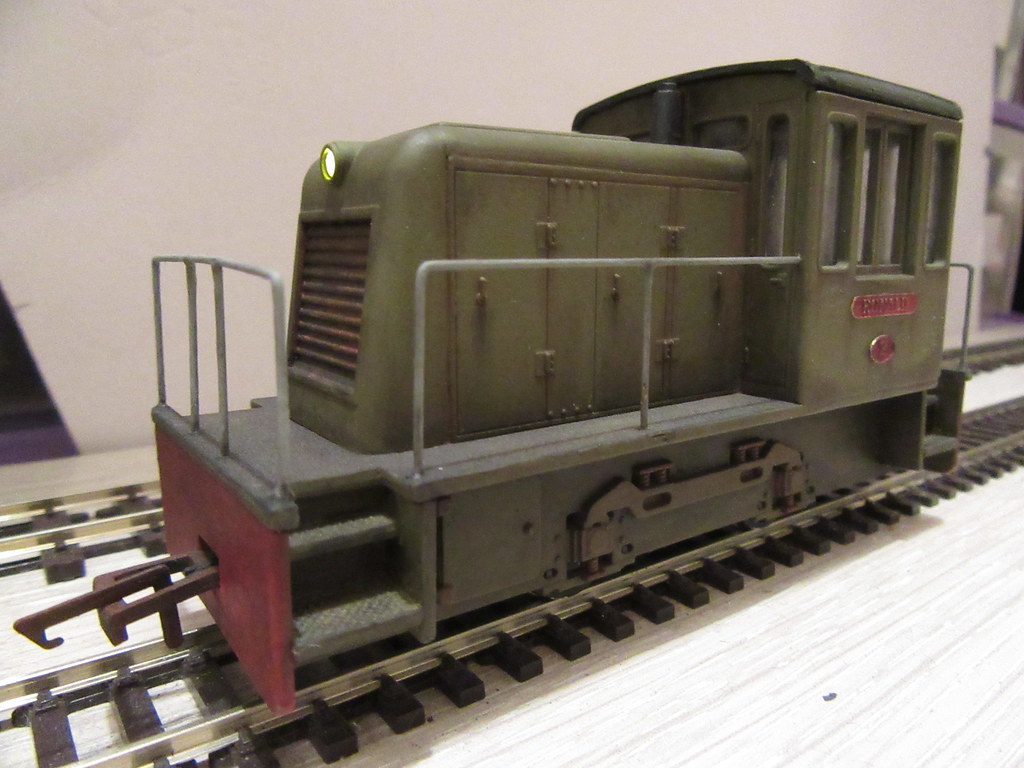 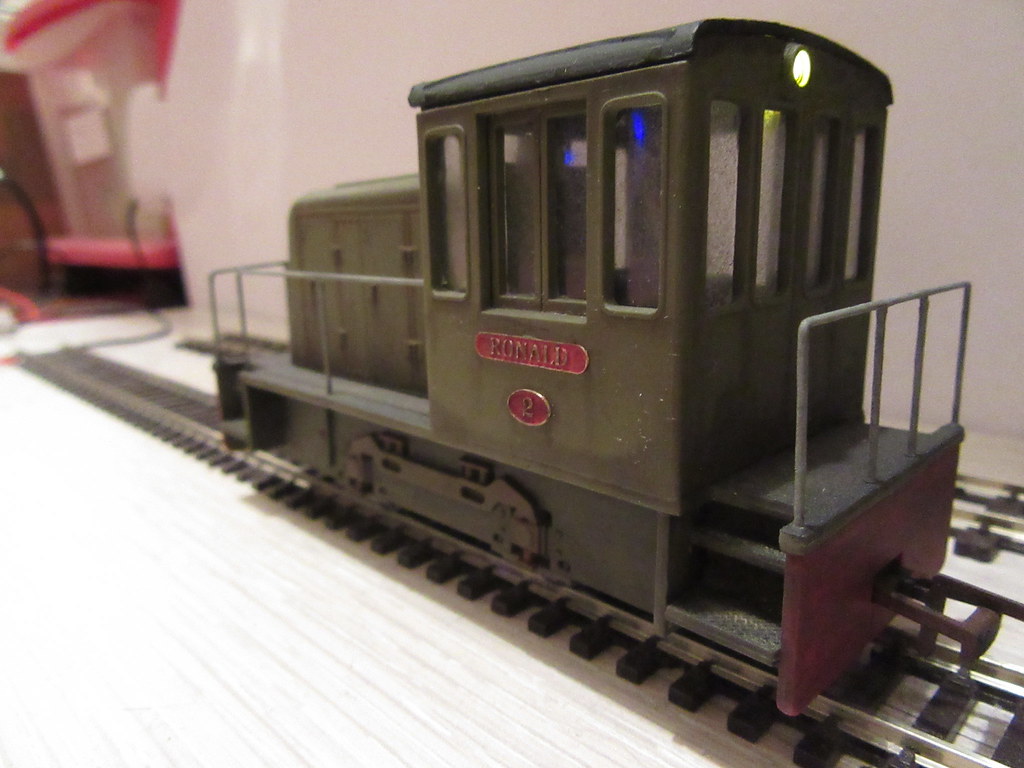 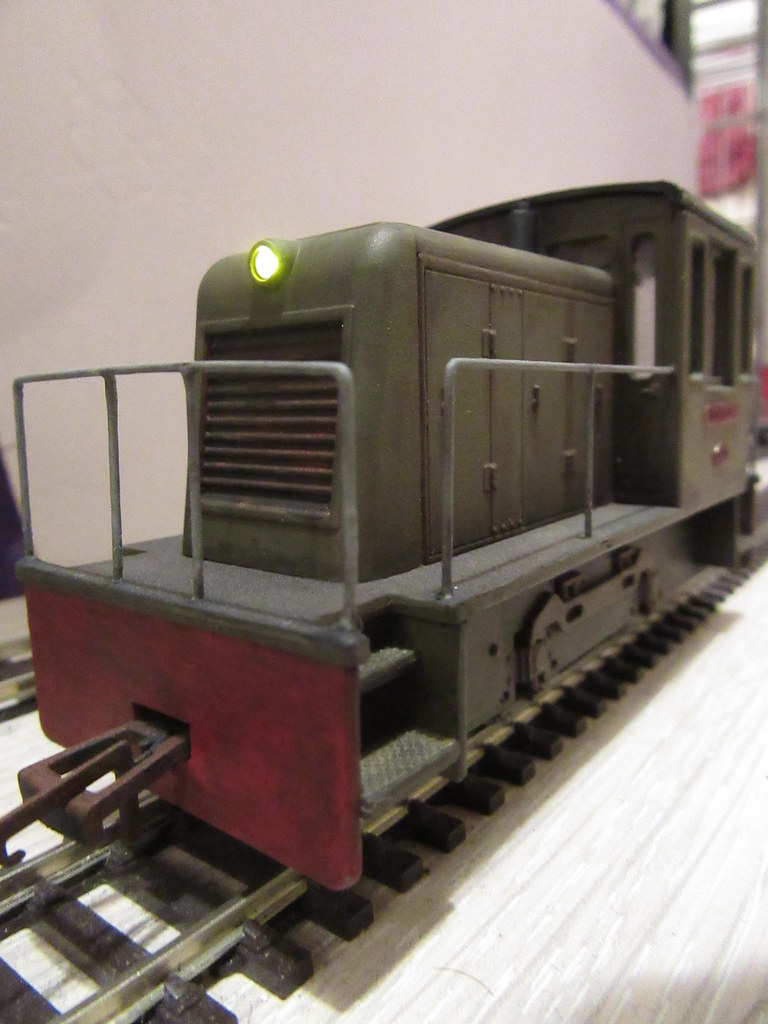