The shed looks excellent as per usual

You can sort of tell it was meant to be American, but it's hardly a red Kansas barn and I think the stone colour and green colour scheme Anglicises it in a way. It would fit right in amongst a grey sky and that persistent Welsh rain.
Once an engine attached to a train, was afraid of a few drops of rain...
Top

Thanks all - Pete, it's only the doors that are American

Next on the workbench is a lorry for my next warehouse building - a (Spanish) yellow BMC FG which I sourced for a decent price on eBay. It came apart easily enough even though it used those annoying triangular-recessed bolts to hold it together - even though I only possess normal allen keys, I managed to get them out by jamming in a flat head screwdriver: 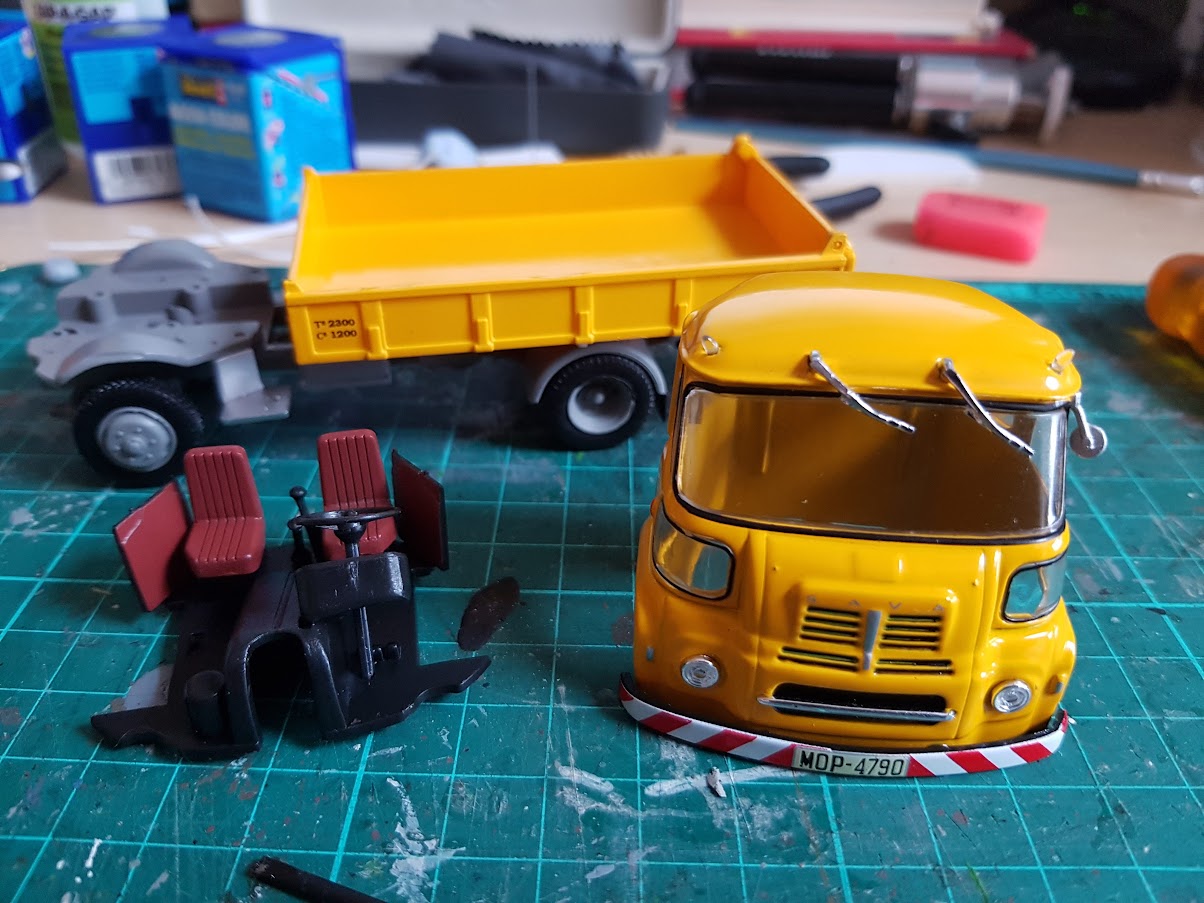 First job was to cut off the steering wheel column & instrument cluster and move to the right hand side, and to carefully rub off all Spanish signage and decals. I also 'constructed' replacement wipers from 0.7mm wire: 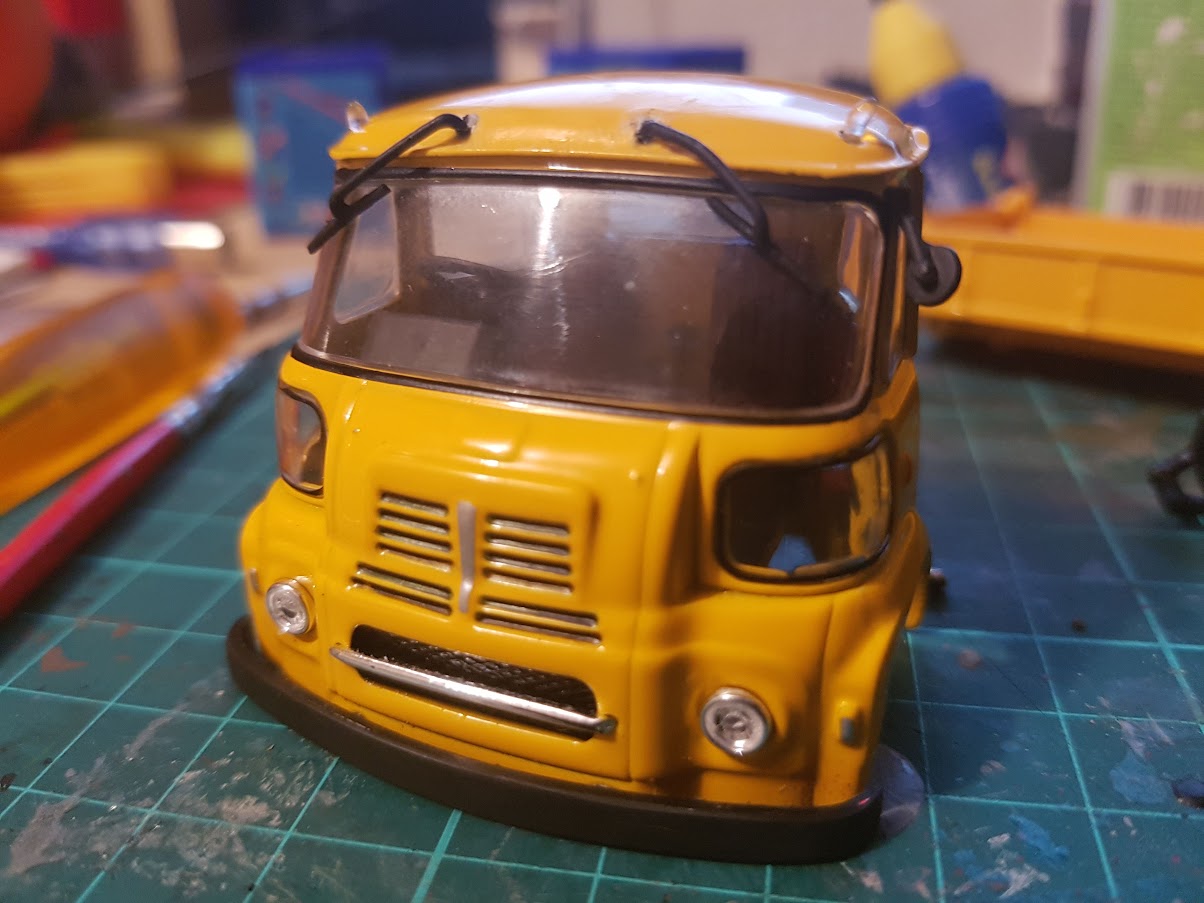 Next up was some weathering, respraying of the back, addition of number plates, a driver, load and workman unloading - as shown in these cruelly-close-up photos: 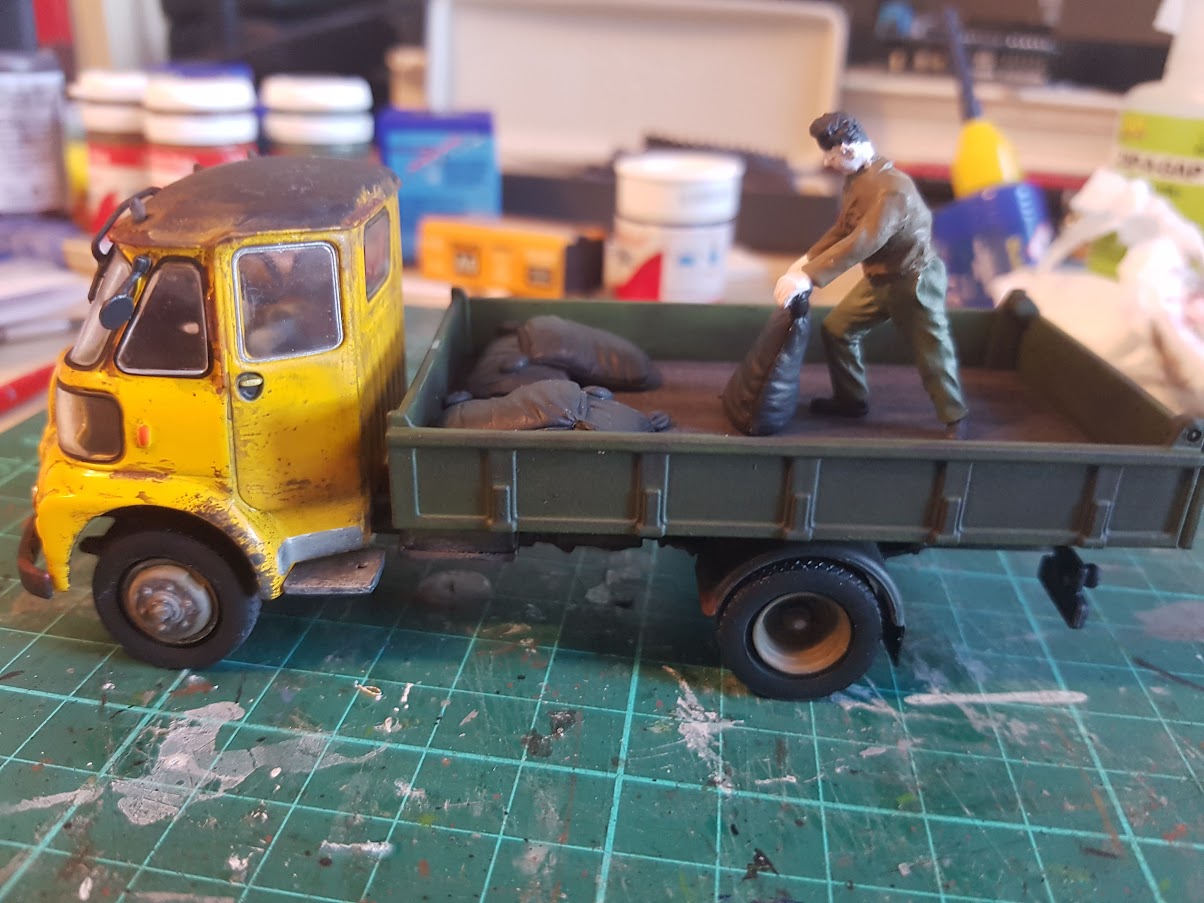 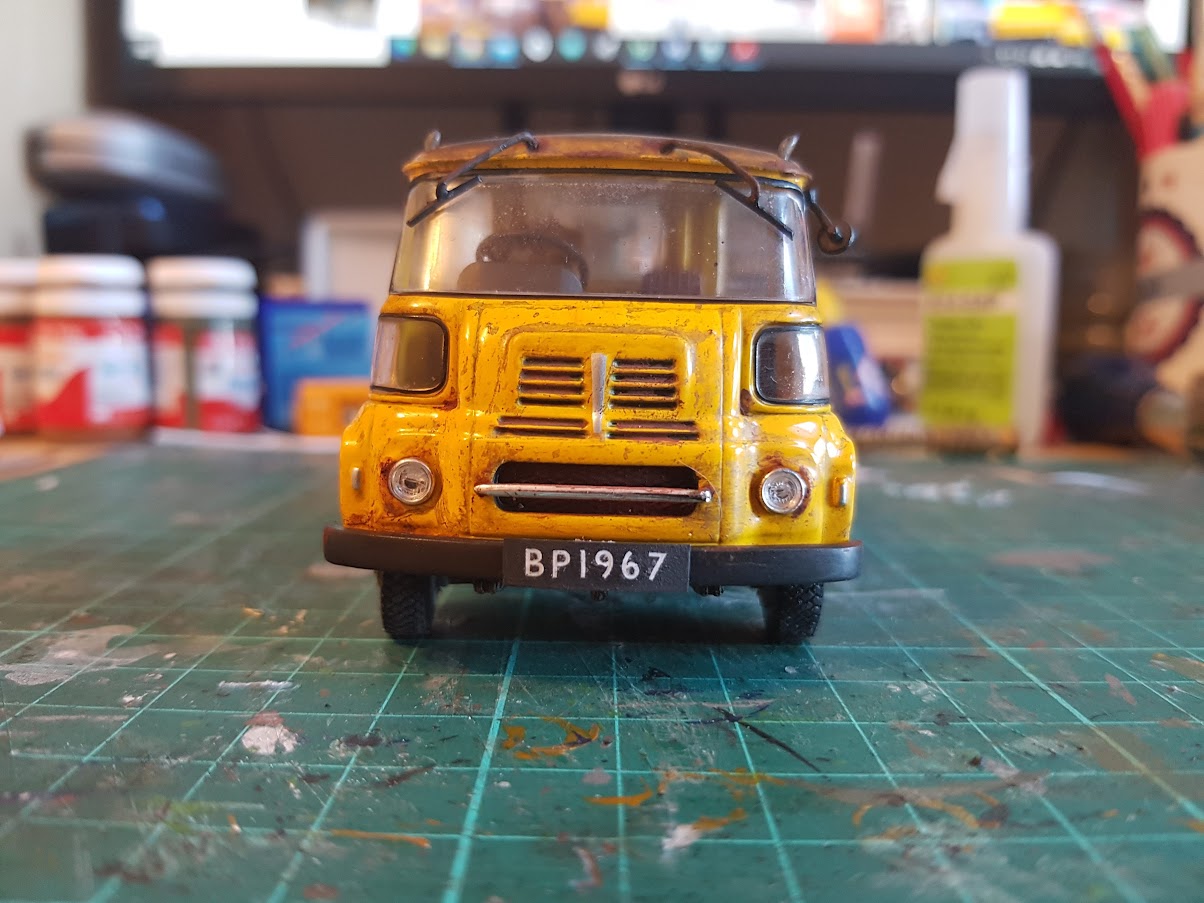 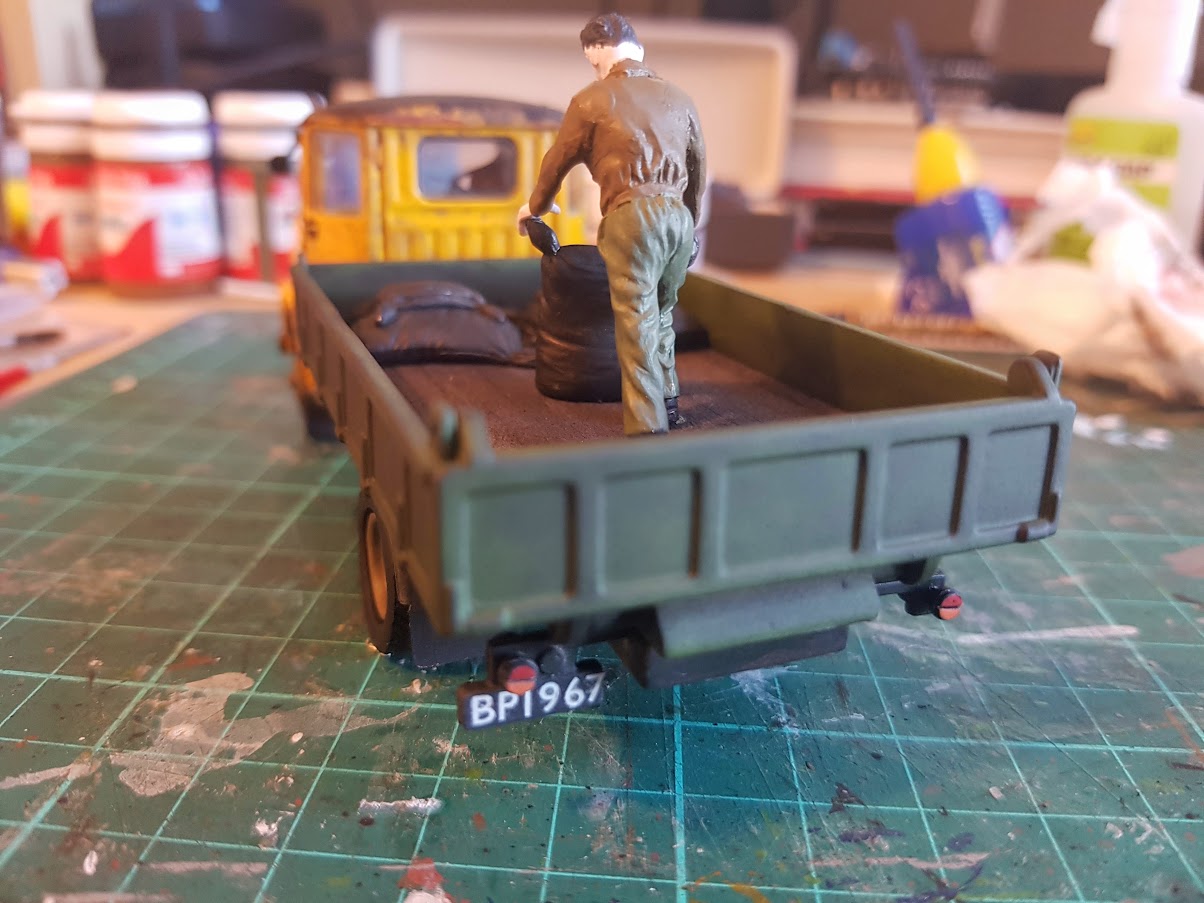 Here it is posed by a mock-up of the warehouse: 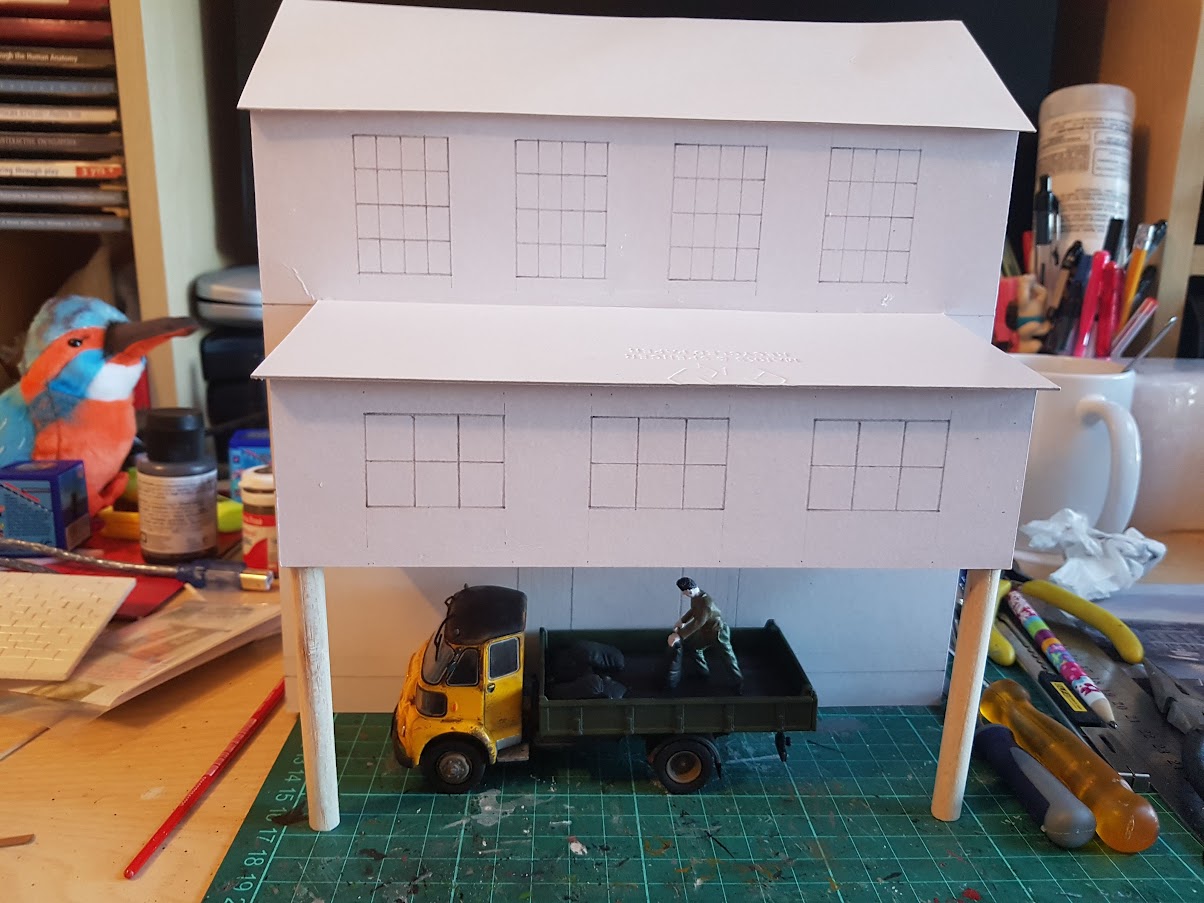 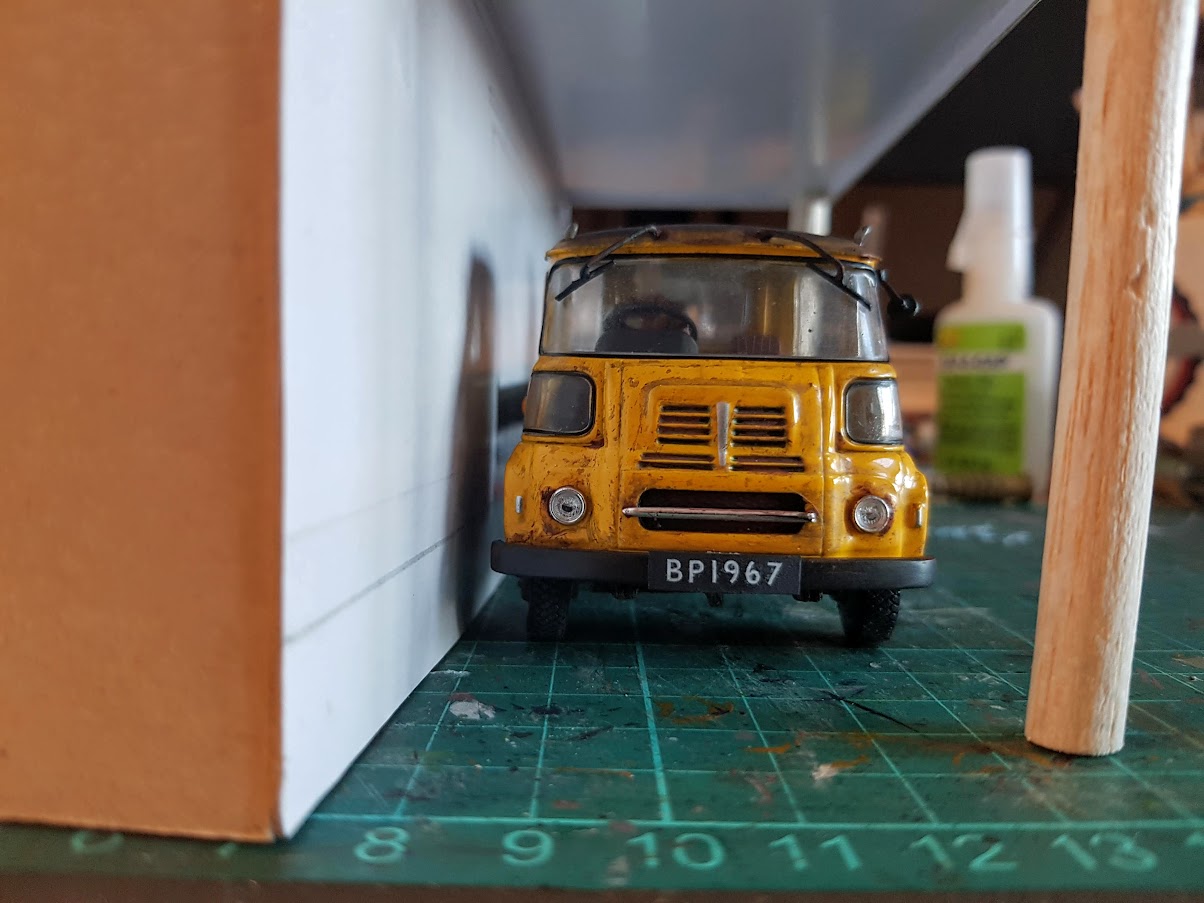 PinkNosedPenguin wrote:Thanks all - Pete, it's only the doors that are American

Aha! So it's the doors that Americanize rather than the other way round. Obviously the original builder had the doors made out of American timber.
Once an engine attached to a train, was afraid of a few drops of rain...
Top

This one will have a stone ground floor with loading doors, wooden 2nd and 3rd floors and an overhang over the loading area.

The ground floor made from scribed 3mm Palight as before, showing the sliding doors (manual this time!) and some timber (balsa!) for the forthcoming overhang: 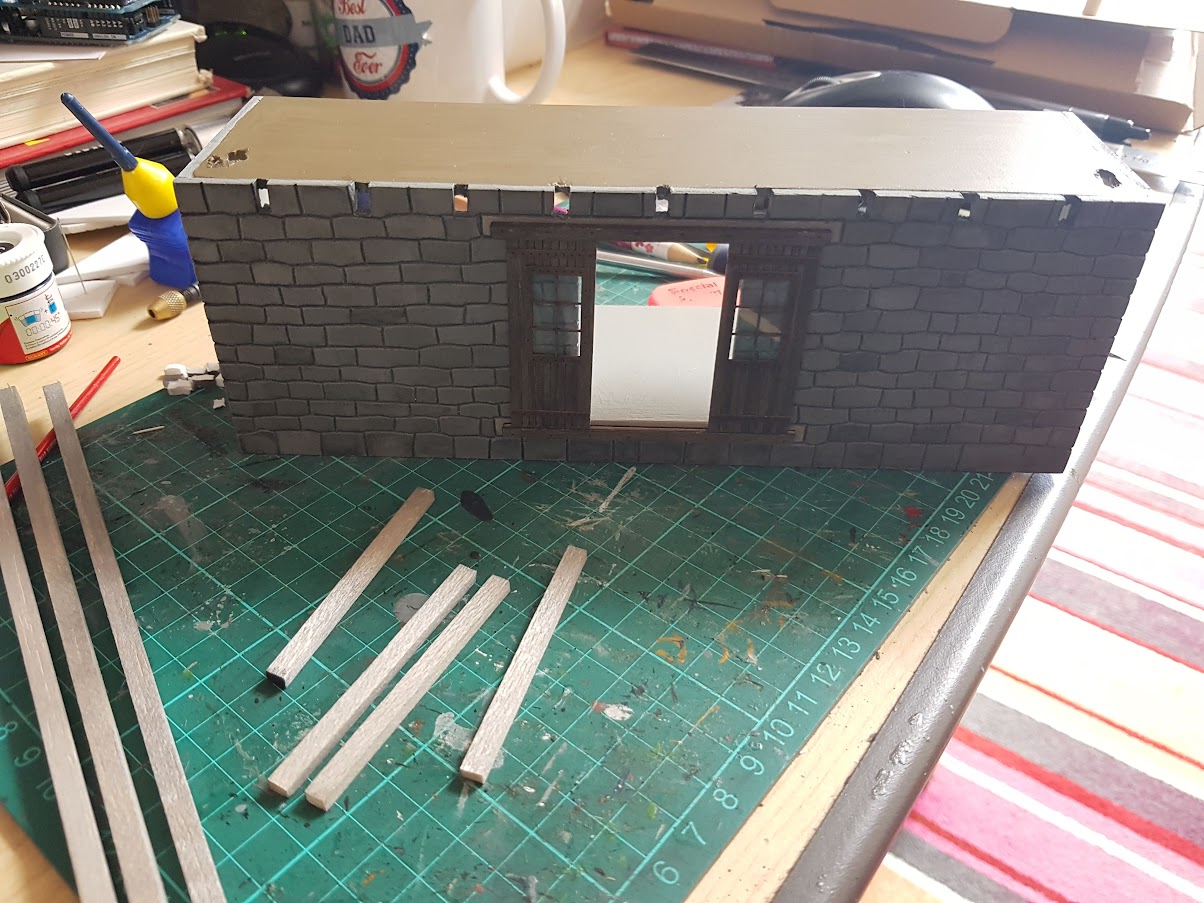 The overhang now added, showing a hole in the floor for a winch. You can see I drew some 'planking' on the floor, but looking at this now I realise I completely forgot to align the plank ends with the battens underneath 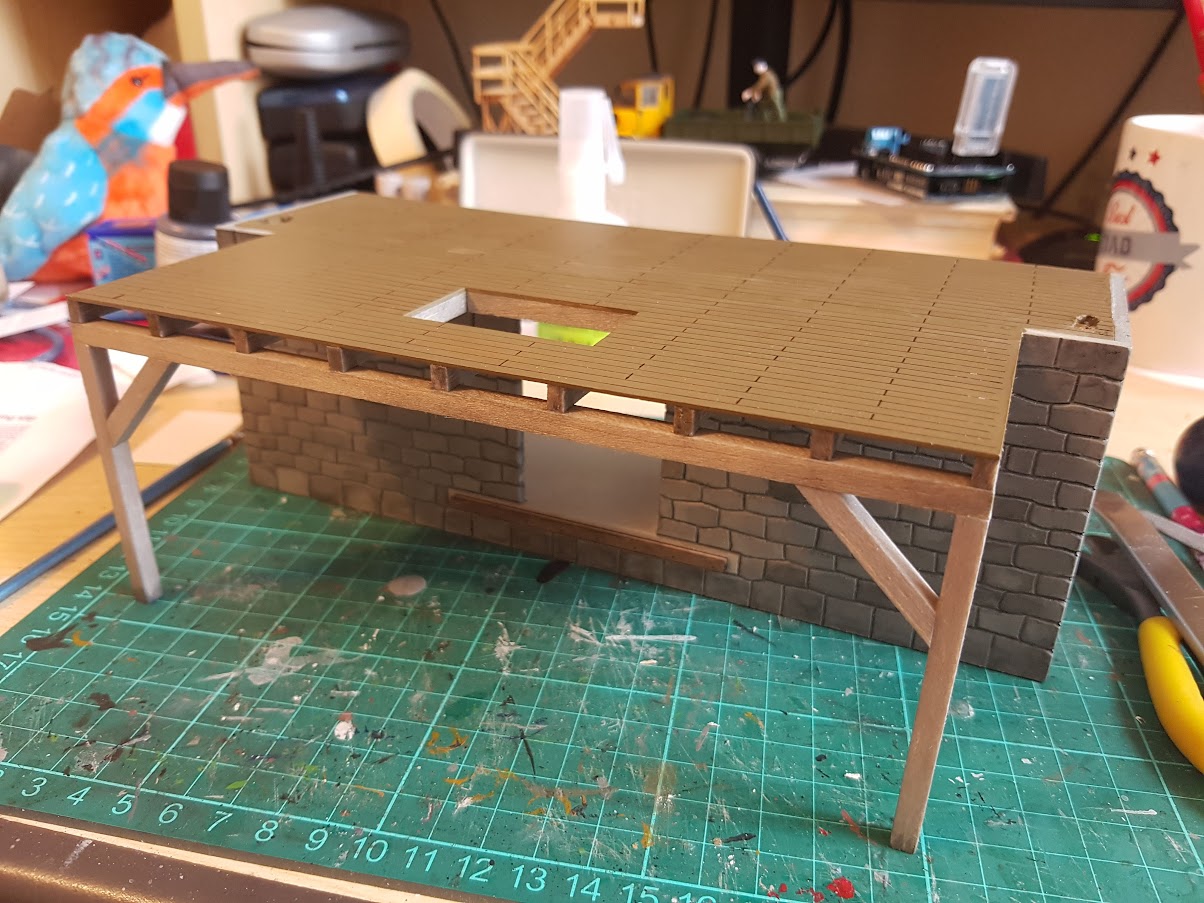 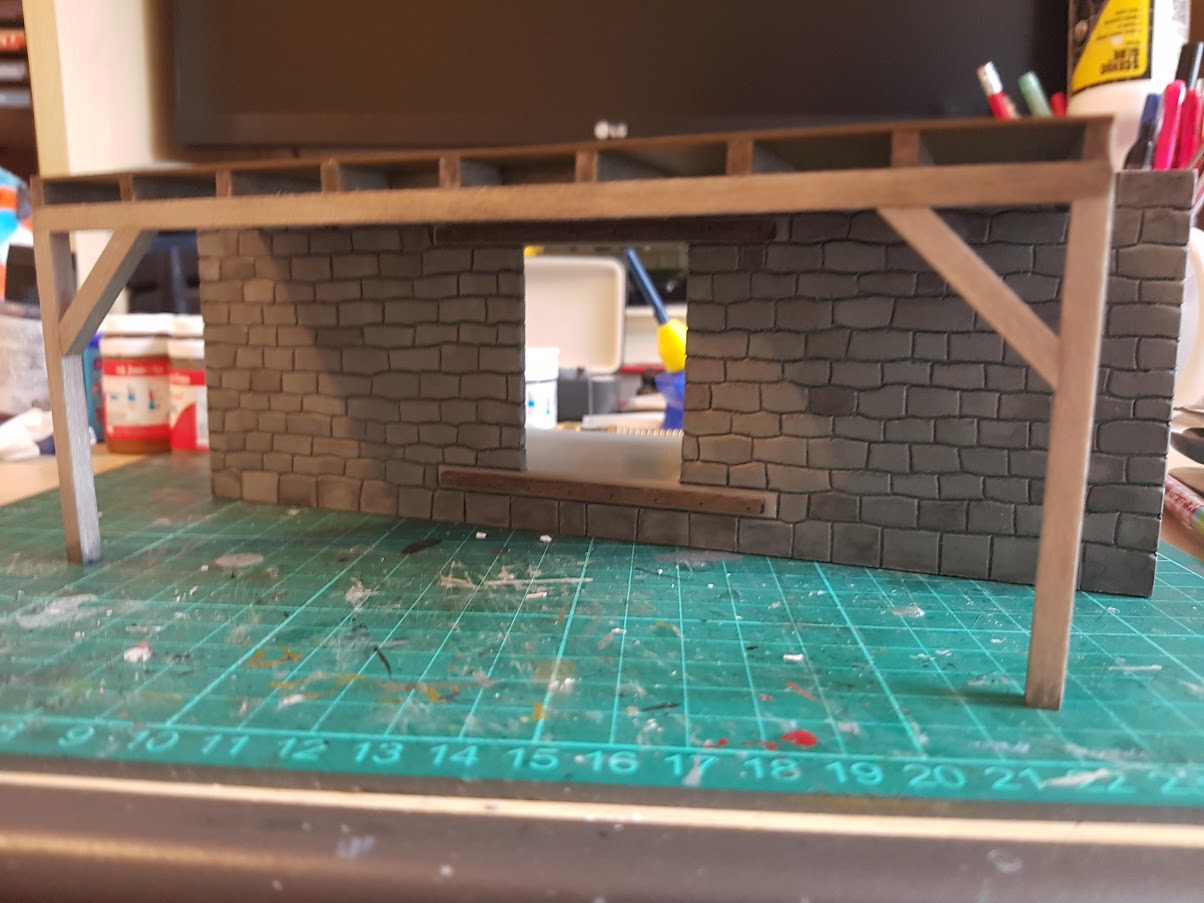 I wanted a simple hand-winch to be glimpsed through the windows of the overhang, so came up with this: 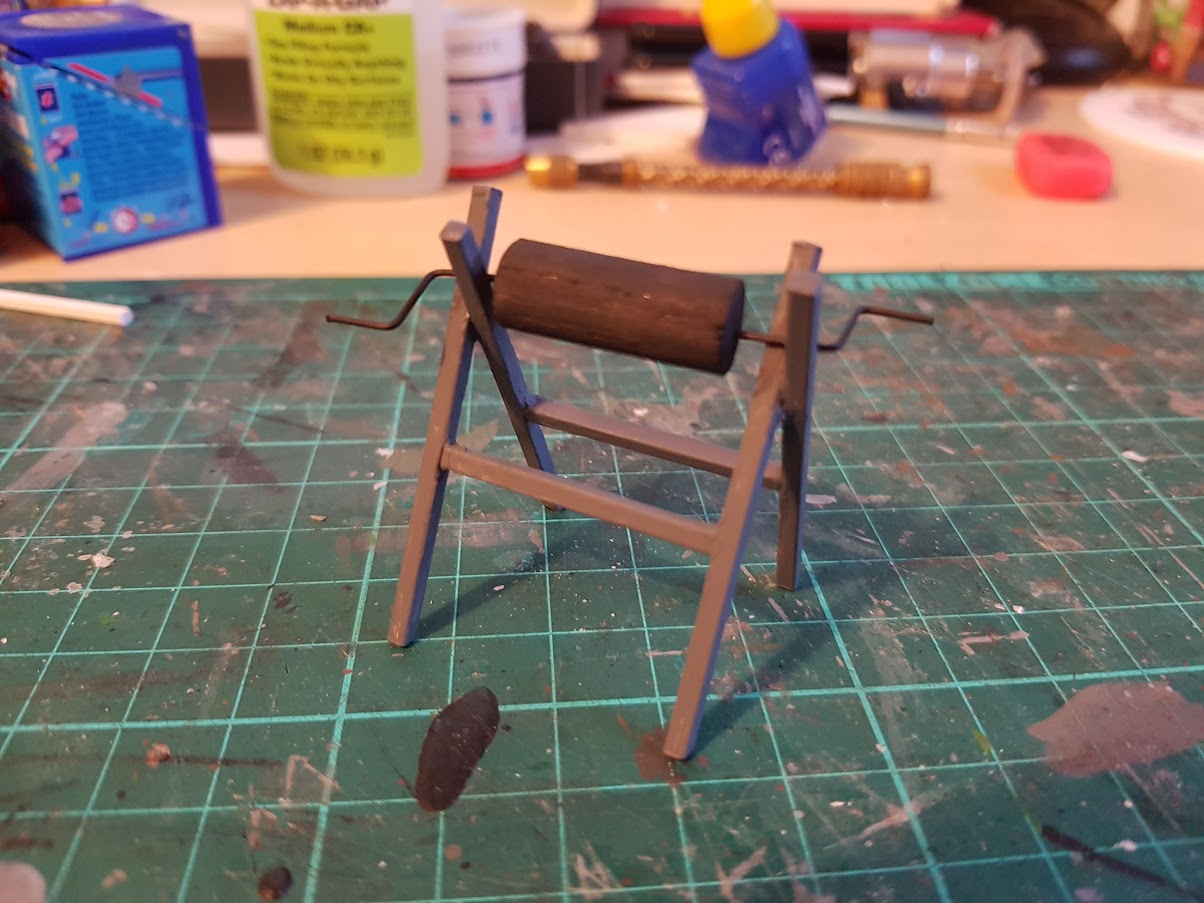 The warehouse building has been progressing . . .

For the upper "wooden" floors, I decided to scribe the Palight into planks, rather than clad with balsa - although nothing looks like wood better than wood (:?), I have found in the past that scribed planking in balsa does not show up very well, so I thought I'd try this instead this time: 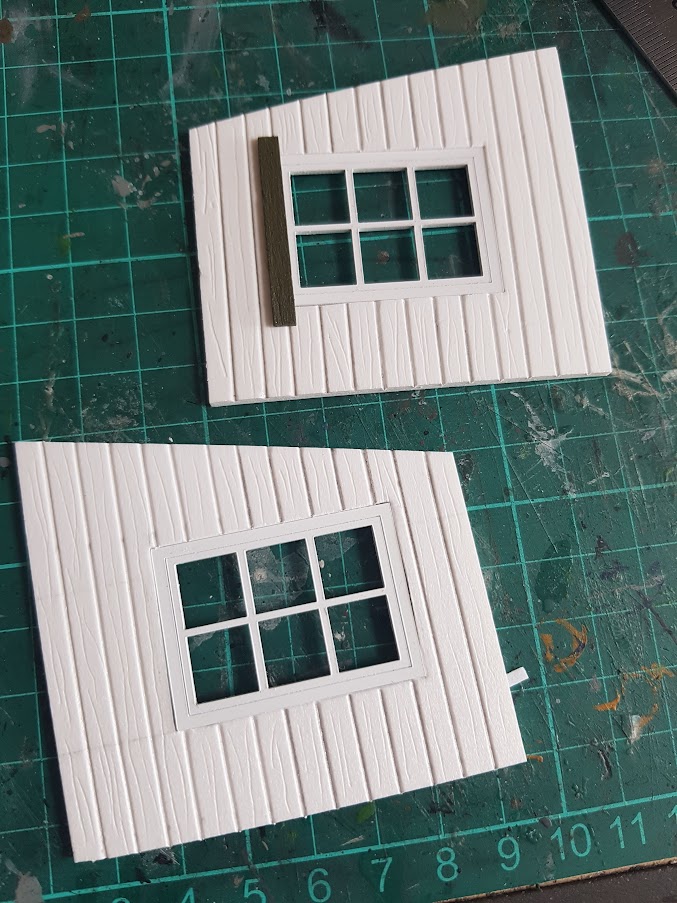 I painted the Palight with watered down acrylic paint and picked out some planks darker then others to emphasise the planks and provide variation. I again used York Modelmaking windows, but whereas in 'stone' walls they look great mounted behind (due to the thickness of stone) I wasn't sure how to mount them in 'wood'. I decided to mount them flush: 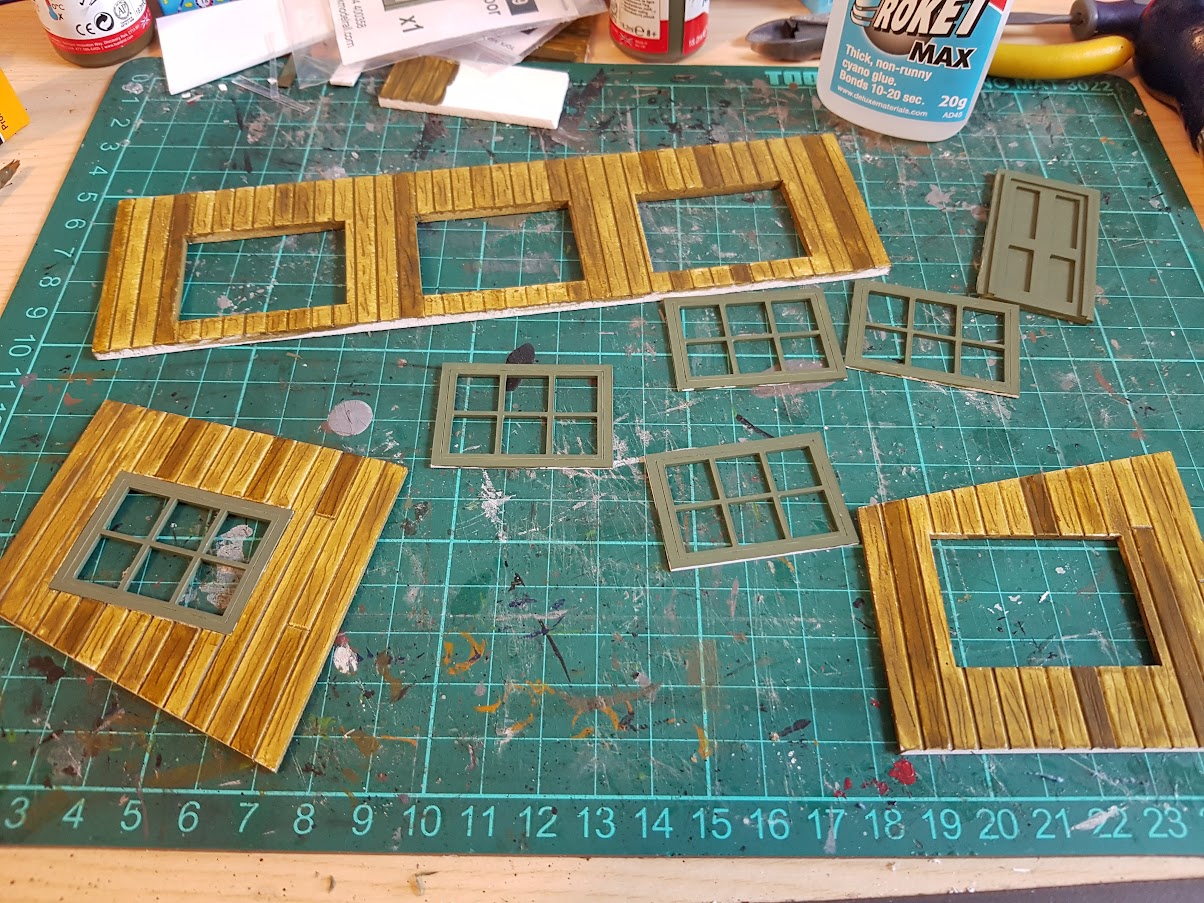 And then added a representation of window frames using strips of balsa afterwards:

I constructed the overhang section first: 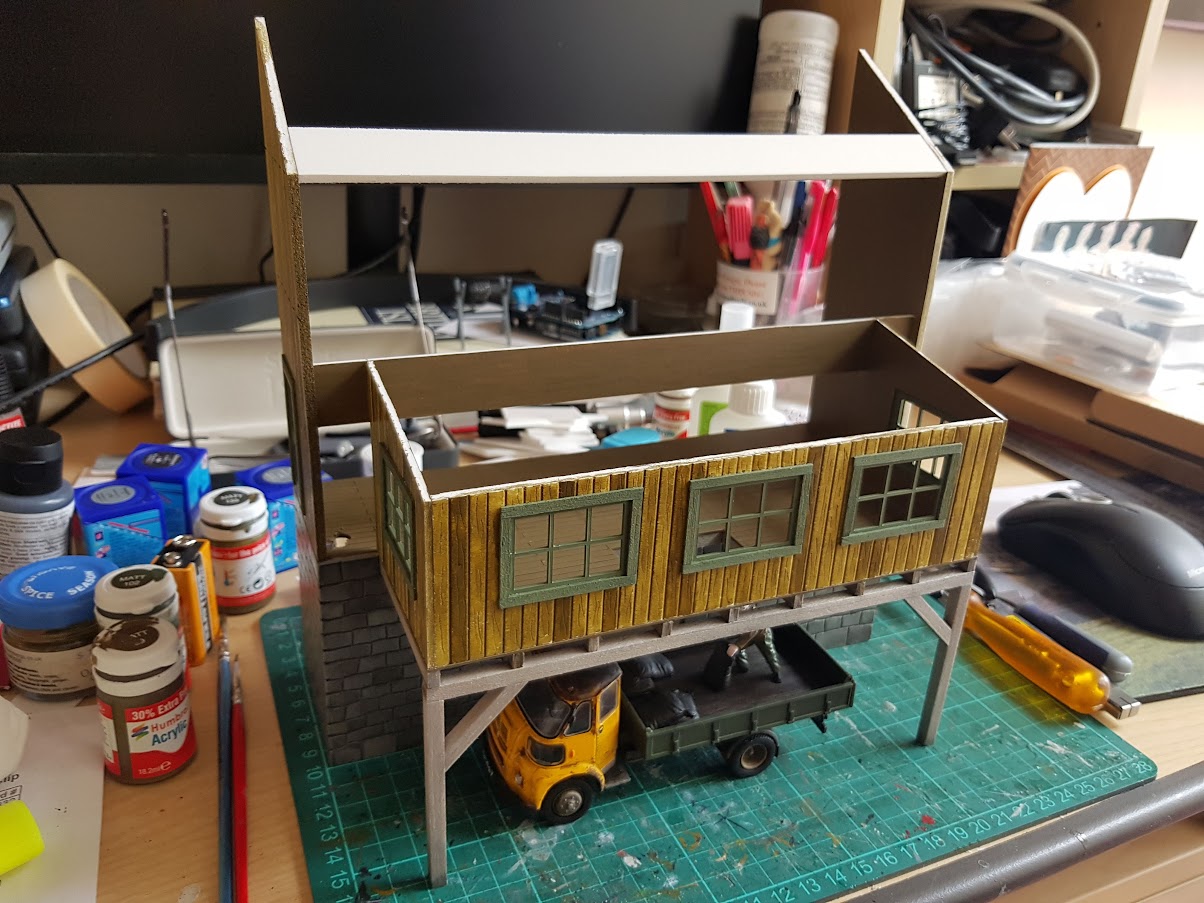 And then added the main building and upper floor. I made a special request of York Modelmaking to separate the inner parts of the windows I used in the upper floor, so that I can model some of them as 'open'. More balsa was added at the building corners too: 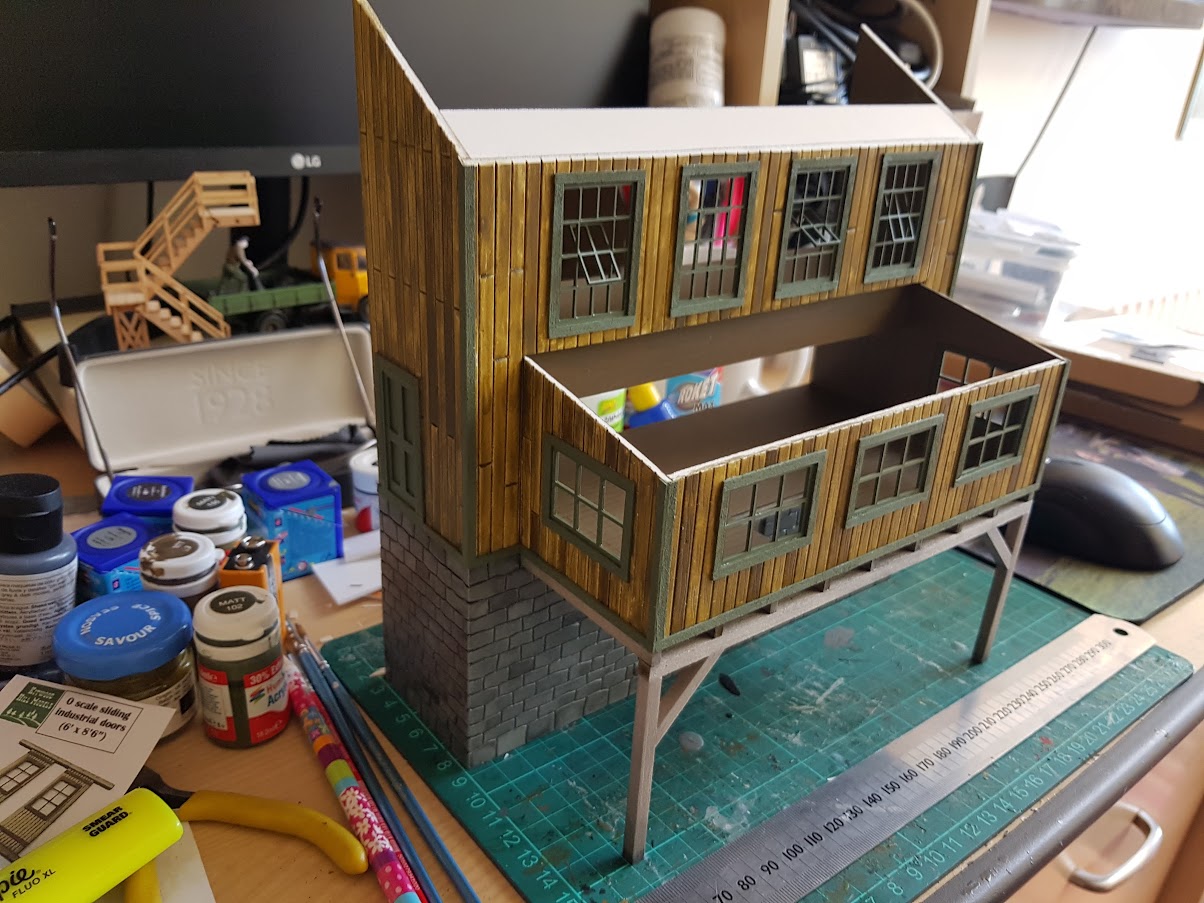 With the "wood" painted/stained in the right colours it probably looks more like wood than balsa or birch ply would have looked.
Great job. Put me out of my puzzlement, apart from perhaps having their frames on the outside, what's American or at least not English about the doors? Are American thieves too thick to realise that planks nailed to a frame can be "kicked in" from the frame side?

I like it a lot.
The windows look great but the whole is really a eyecatcher already.
Good colour choice.

Re the doors - they are manufactured specifically for American Railroads. I think the windows in them make them look a bit more American? I think they'll be fine though . . .

See what you mean, multipane windows in doors aren't very common in UK industrial buildings, they tend to be minimal or non existent.
Growing old, can't avoid it. Growing up, forget it!
My Layout, My Workbench Blog and My Opinions
Top

Short update for the roof on the overhanging section.

It was made from some 'corrugated iron' sheets I purchased on ebay (apparently made from recycled pie dish foil!). I glued the strips onto a foundation of plastic sheet: 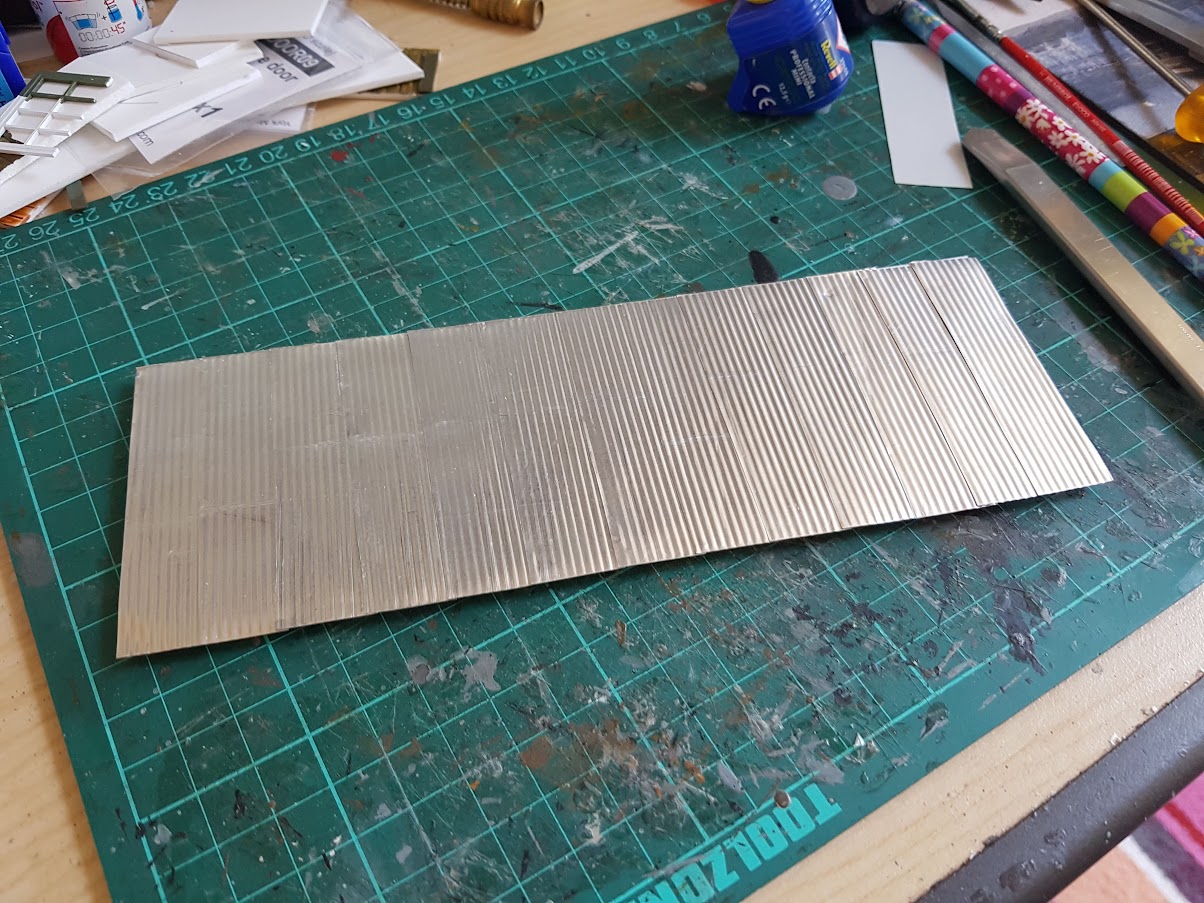 It needs lots of weathering, but after a couple of coats of primer it looks like this in position: 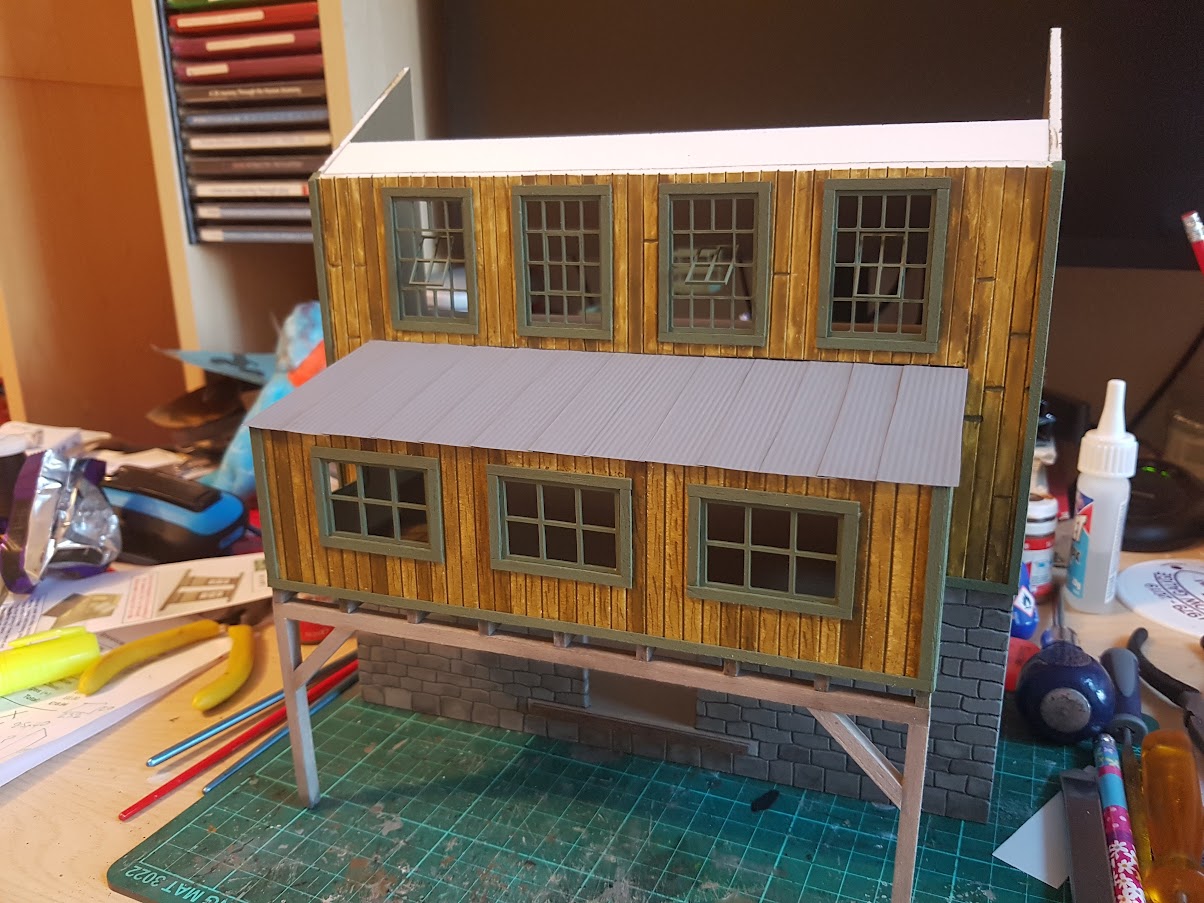 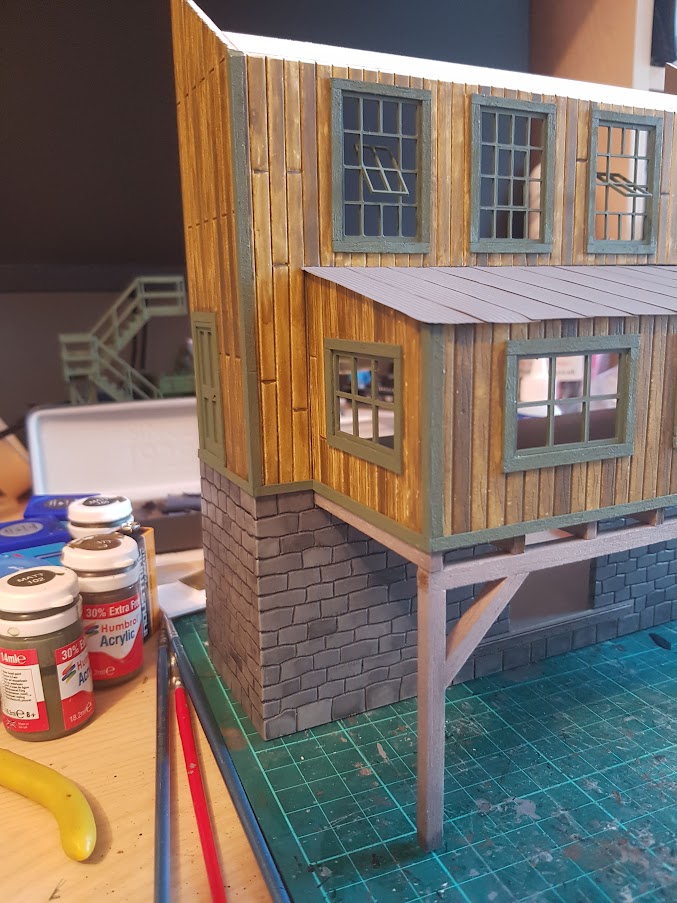