kebang wrote:(If I can find a suitcase/holdall a metre long!)

You can cut them in half, 18" lengths are much more manageable and it's not a problem with laying, I can remember Peco selling OO9 track in 18" lengths and Roco sell in lengths less than 3ft... In fact you could suggest that to a shop if you wanted to buy by post, you may find a kindly retailer who'd agree to do it, I'm sure they've had weirder requests in the past!!
Top

That's a good idea Mountain & b308.
However I'll be in the UK in 3 months time. As shipping takes almost a month, and as before my holiday I'm going to be quite busy with other things, I might as well exercise a little patience & then spend a few hours shopping in the UK for exactly the right track.
Even then I will probably take your advice & get it cut in half to fit comfortably in my luggage.

Is a good idea. Peco do make 0-16.5 track, though very few dealers stock it.
Any thought to locomotives and rolling sock? Smallbrook Studio and Peco I tend to use for kits. All else I scratchbuild or occasionally convert from something that looks interesting.
Another decision to make for your collection is to decide on what coupling to use. Most people use tension lock. Some use kadee type couplings. I make my own to my own design to save on costs, though I've yet to catch up on fitting them to all my stock.
What about paint? If I run out of small tins of paint I sometimes use outdoor exterior paint for my locos. I use gloss for locos and coaches and matt paints for the waggons and vans. Others stick to matt modelling paints and spray paint for a more realistic finish. I brush paint which I think adds its own character.
Top

You need to look for proper model railway shops rather than ones who do "other stuff" like Ian Allan, Modelzone (that was) and Hobbycraft.... All the local MR shops around Brum stock Peco O-16.5mm track last time i looked... And HOe and OO9 as well!
Top

Mountain wrote:Love the light. Noticed it is a plastic kit. (Assumed it was resin). Does it need a little weight added to it to help it pull or is it OK as it is?

- are you native to the Philippines or an expat? I've been to many South East Asian countries in my travels but not (yet!) to what Lonely Planet used to refer to as the "forgotten islands" . . .
Old N layout
0-16.5 workbench
Micro 0-16.5 layout
Top

Anyway, back to my loco - I have procured and painted a white metal seated driver ready for installation in the cab 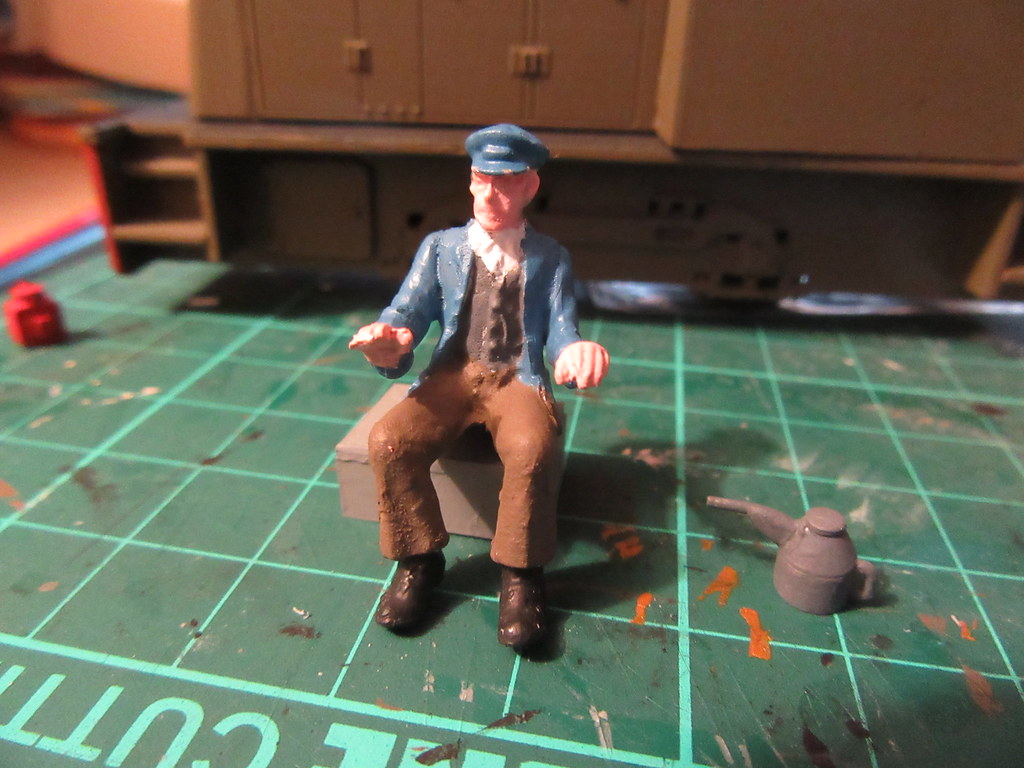 Wow! He looks just like a guard I used to work with. Well done. It is not easy getting them to look so real. One issue is to have enough different colours of matt paint as it is surprising how many different colours of paint one needs when painting ones little people. I was brave enough to paint one of my train crews eyes (A guard). He is slightly cross eyed, but as it wasn't so easy to paint eyes, I settled for that look... I have not tried to paint more eyes as yet!
Top

Two photos of my near-finished 0-16.5 locos.
I don't think I'll need any more.
Two near identical steamers, from Faller O bodies,
and an 0-6-0 OO Plymouth diesel body with a slightly widened body and enlarged cab
(Cut down approach, and build up approach.

Just for fun, sitting on the same gauge of track are my two smallest OO locos.
(battery radio control)

That's one big difference between OO rrackplans and O-16.5 trackplans: the latter will need 2 to 3 times the gradient length to allow a track to rise to cross over another.

The diesel? Ah well. I had a nice plain blue livery done and I reached for the sealer varnish. About two seconds into spraying It was clear I had picked up the adjacent grey primer.
By the time I'd wiped that off, it was clear that "neglected rustbucket" was going to be the only viable livery. If I can't live with it, I'll find another body.
One steamer is complete, the other two locos need steps, windows, couplings and crew.

I have had sitting around for more than ten years a Minicraft O-scale kit. 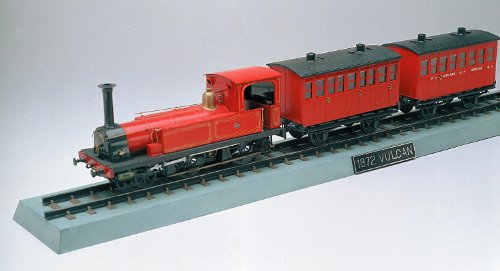 The loco could almost certainly be adapted to a small-wheel OO chassis, but would probably need shortening, which might entail filling and smoothing the engraved lining on the side-tanks.

Could split if the person who wanted the coaches didn't fancy tackling the loco.

As I say it's the wrong size for my loading gauge, and I need to cut down on projects I'm simply not going to get to.
(No, not dying yet, but I have a LOT of materials for "one day" projects and I now have O-16.5 covered, twice.)

Mountain wrote:Wow! He looks just like a guard I used to work with. Well done. It is not easy getting them to look so real. One issue is to have enough different colours of matt paint as it is surprising how many different colours of paint one needs when painting ones little people. I was brave enough to paint one of my train crews eyes (A guard). He is slightly cross eyed, but as it wasn't so easy to paint eyes, I settled for that look... I have not tried to paint more eyes as yet!

I tried adding eyes (and lips!) on the passengers in my coaches (see p7) but it did not really go very well

. So, for my (much more visible) drivers I am leaving their facial features in skin colour - maybe they are blinking like in a photograph

Chris,
If your coaches are available in May I'll certainly take them from you with thanks! I'm a bit worried about your comment that 'That's one big difference between OO rrackplans and O-16.5 trackplans: the latter will need 2 to 3 times the gradient length to allow a track to rise to cross over another. I take it that this plan has no chance of success?

Dont think it will work unless you have a rack railway.

I would go for a simpler plan on the same level in the size you have made it. I've done a simple oval with a passing loop at each side (One behind the scenes and one on the main board). In 5½ ft I should imagine you will get 3 to 4 coach lengths behind a locomotive if you have a loop if using shorter coaches.
I have just short of a 7ft board and I get about 5 to 6 coach lengths (4wheel coaches) behind the loco. Many narrow gauge systems ran short trains so it isn't too much of an issue.

The body has now been fixed to the base, though the roof is just resting on top for now... The driver is installed in his cab, with the side windows open, and looks to be concentrating very hard on driving 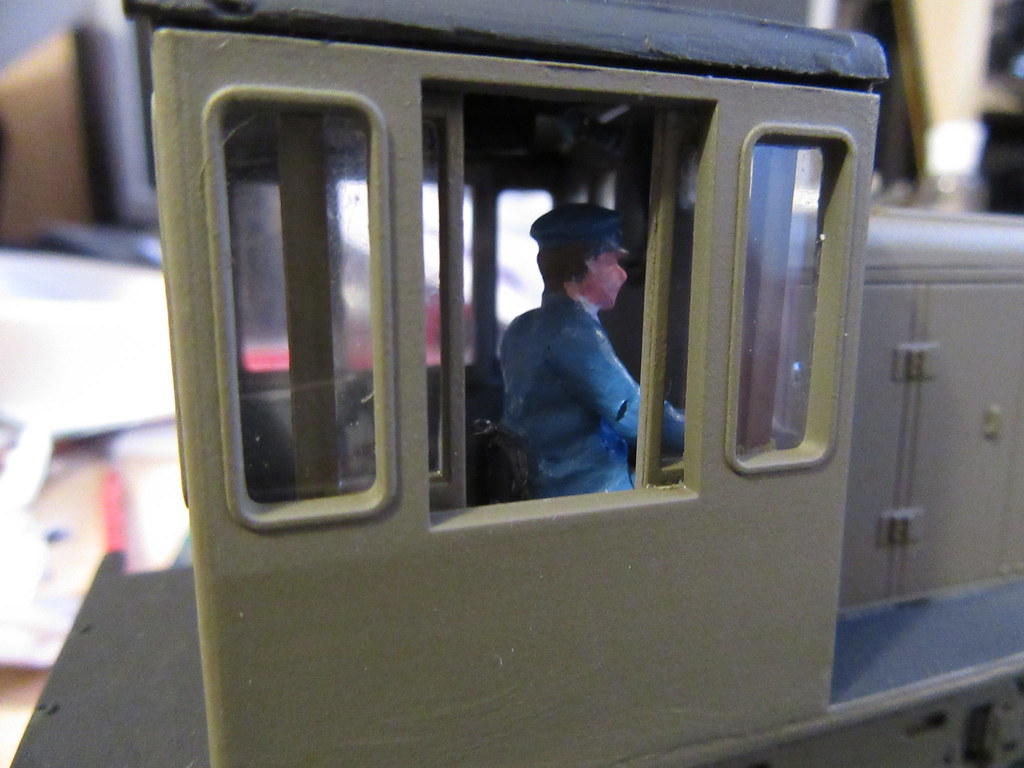 His view towards the front is not that great, but probably adequate? 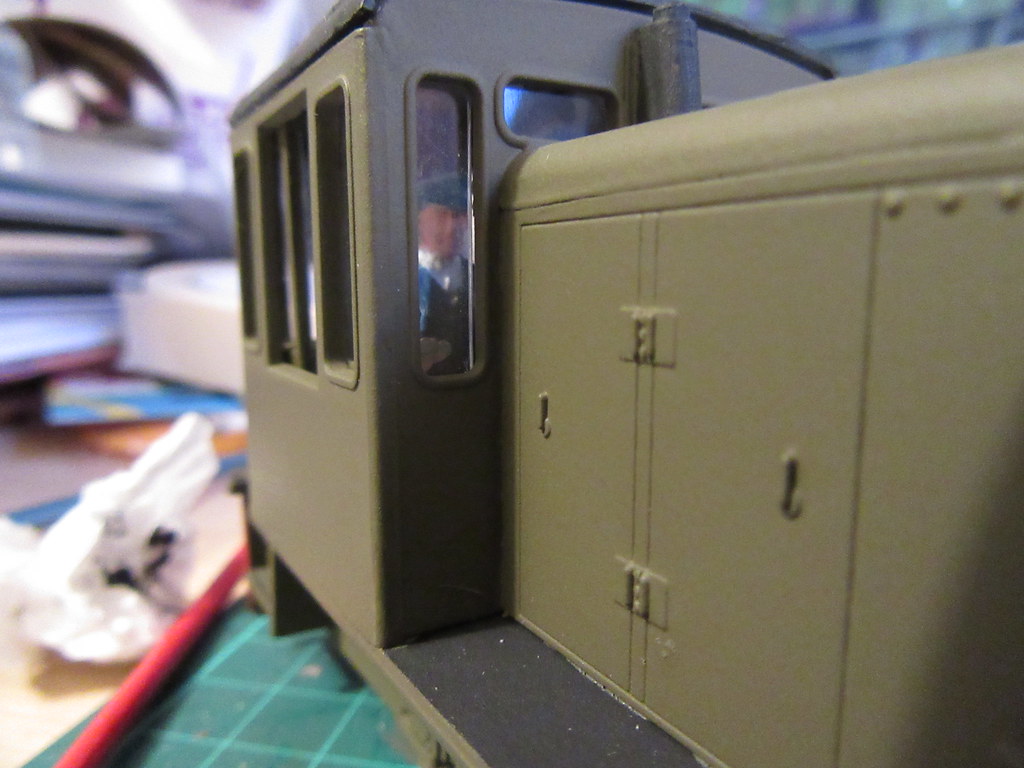 Also the back light LED is now wired up (I have reduced the brightness of both lights which are controlled via CVs on the decoder): 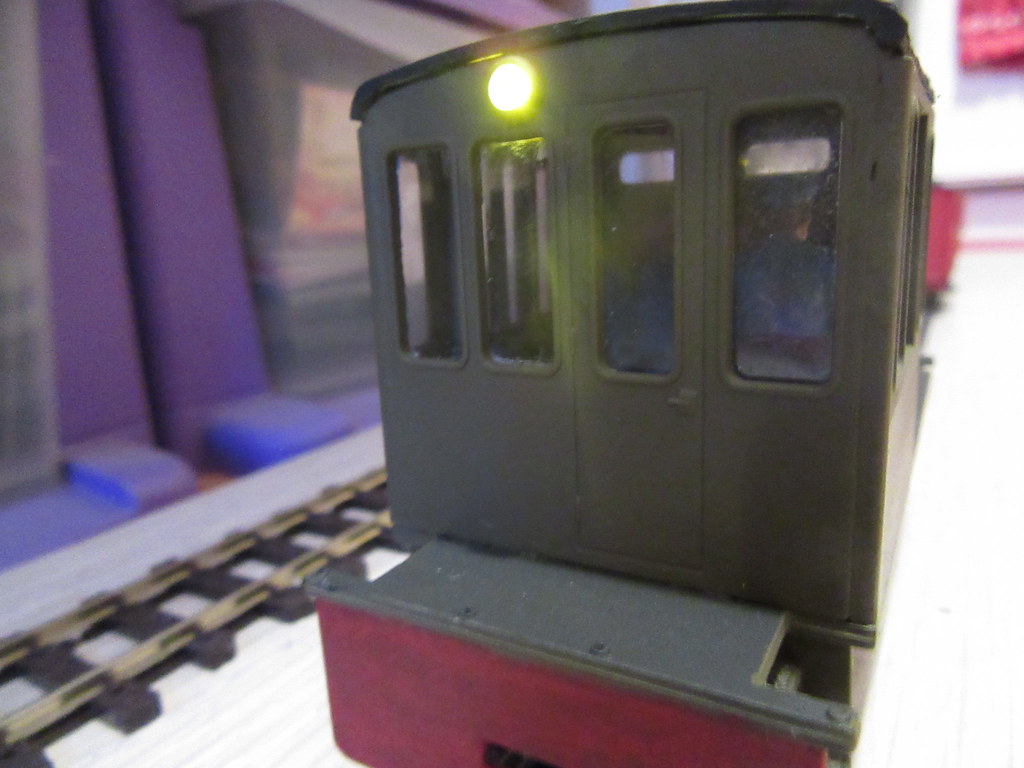 I have added some weight and light lubrication to the chassis - it runs ok, but I have not been able to run it in properly yet as I only have 1 metre of powered track

He really looks the part in his cab. Nice.
Top
Post Reply
305 posts