Post pictures and information about your own personal model railway layout that is under construction. Keep members up-to-date with what you are doing and discuss problems that you are having.
Post Reply
36 posts

Looking at the layouts under construction properly for the first time in a few weeks, two dockside layouts underway, Josh and Goldenoldie.
I'm going to add a third. My 1944 layout is still under construction but it is portable rather than permanent as the man cave is also a guest room and it's a bit of a pain to get out and put away so I decided to make a smaller shunting layout that I can set up and put away in a few minutes.

Board size is 72” x 24”. When I started the 1944 layout the intention was to have WWII theme with bombed buildings, something that I have been wanting to attempt for a while, but it ended up more 1950's so Canford Quay will be set in the second world war, a small port on the South coast.

I have been collecting and modifying bits and pieces over the past couple of months but I didn't manage to get a lot of modelling done last year for various reasons so nothing to show yet other than the baseboard. Once it's properly underway I'll post pictures and updates. Although I have got the plan in my mind I shall be following the other two layouts for inspiration. 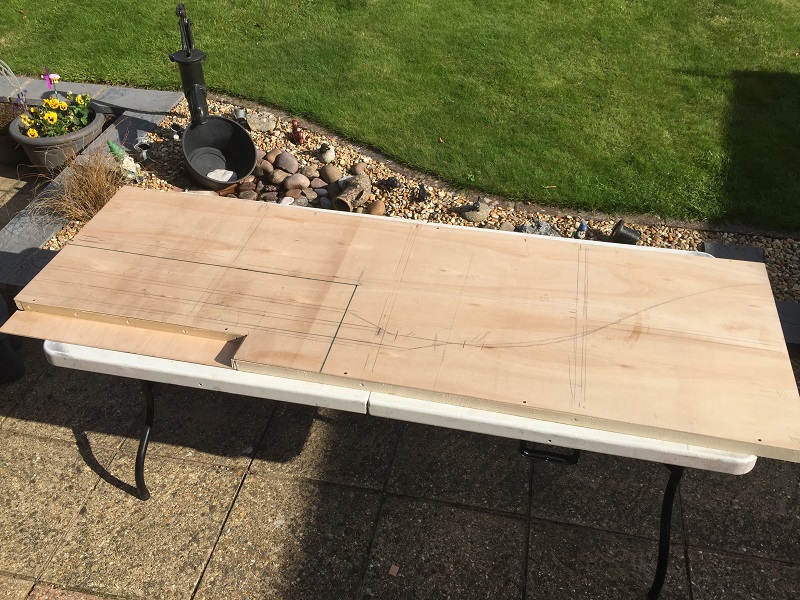 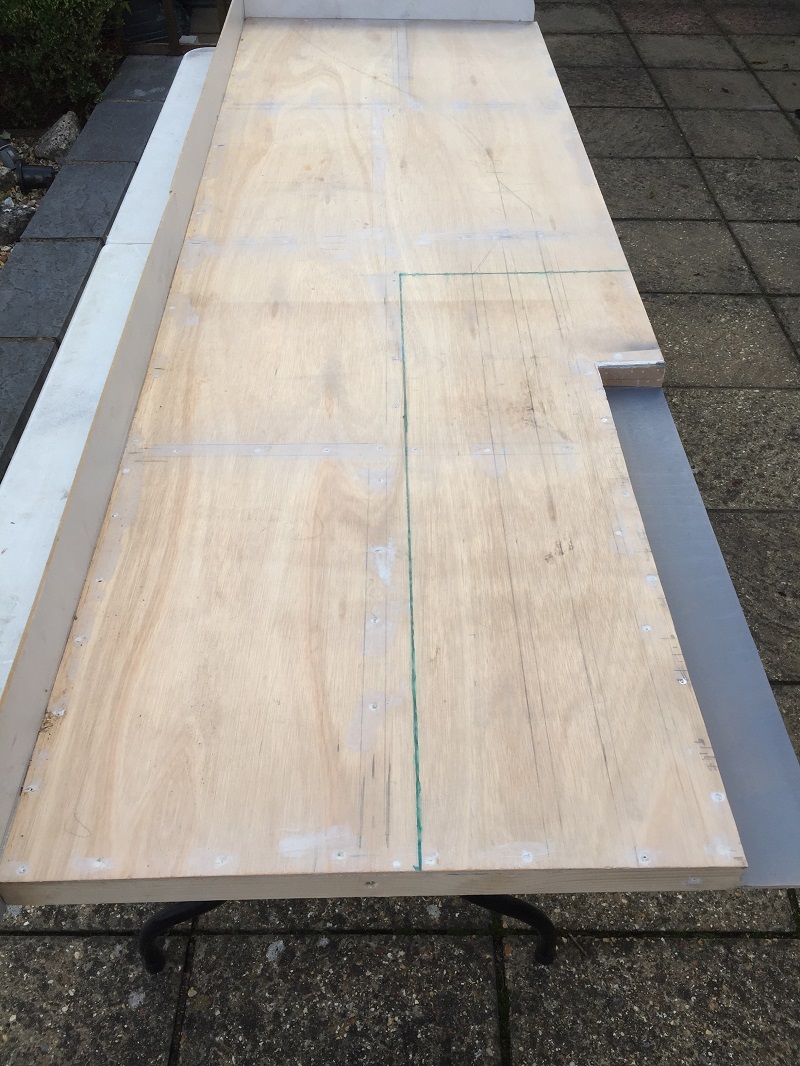 Sure to be a very exciting venture Heda! What plans have you got for ships in dock?
Cheers,
Josh
Our 8x4 oval viewtopic.php?f=22&t=53482

I've got a small coaster that I'm painting and building, apart from that just a small rowing boat and inflatable dingy. I'm planning on not sticking the coaster in place so I can swap it for something else, not sure what yet but as it's a wartime theme maybe landing craft.

Ohh lots for me to look at.
I like small shunting layouts, even non-working dioramas and the
quay side theme.
Was there a Quay at Canford ? Nr Poole ??
Doesn't matter, but I seem to recall going to Canford Cliffs when I had a girlfriend
in Poole. All near to 60 years ago now.

There isn't an actual Canford. Locally there is Canford Cliffs / Heath / Magna / Bottom.
The only Quay is Poole, which did have a railway line, long since gone.
So Canford Quay is fictional, I've used Poole for inspiration but the layout will not look anything like it.

Nothing wrong with Poole, still have good memories. Including the Poole
Wheelers CC 25 mile time trials of the early 1960's. All SO long ago.
I like fictional places, a chance to allow imagination to spread it's wings.

Interesting idea, Dave. Having a separate layout that can link in to the main plan. I did a similar idea with Clarence Dock.
I shall be watching your build see how it comes together.

The harbour wall is in place, I used some Wills stone wall that I had laying around. I'll paint some green slime at the bottom before adding water.
Mounting card has been stuck down to raise the level nearer to sleeper height. Once the track is in place I intend to cover it with cobblestones.
The harbour has had a coat of green acrylic, not the final colour just something to make it look more like a harbour for now.
Lastly the strip of paper will be a road, the plan is to have some buildings along the back with open rough grass areas to the front and right. 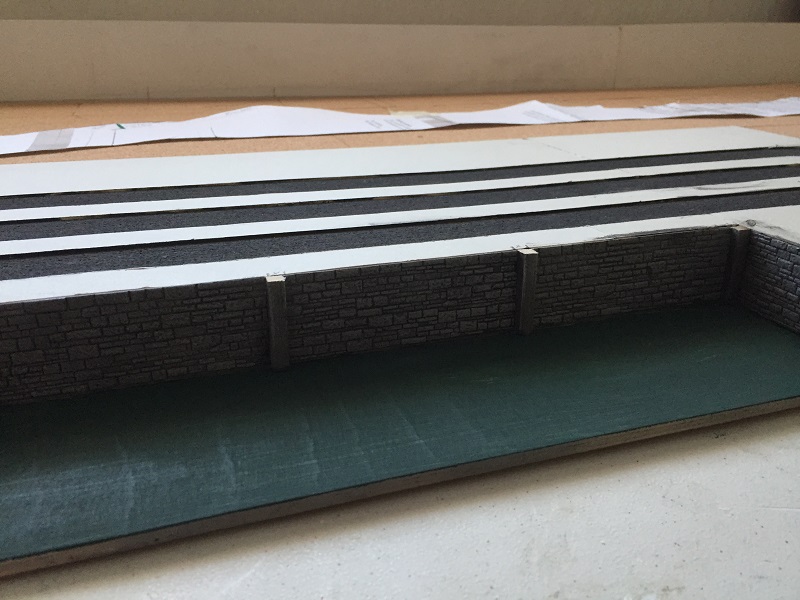 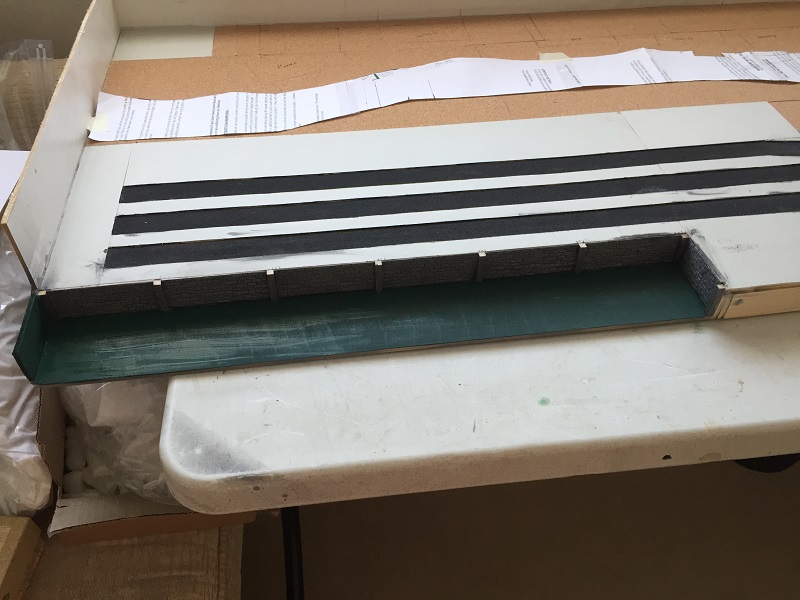 Moving fast !!
Then the water !! gloss varnish ? A plaster type base with some surface wavelets ?
Ohh I suppose I'll have to be patient.

It might look like it's moving fast but it was the easy stuff, I had the materials laying round so it was just a case of cutting, painting and gluing. Track laying is next, should be quite straightforward, three tracks in the dock, two sets of points and one track leading away to the top right.

The water, which will be on of the last jobs will probably just be a coat of green/brown acrylic and a couple of coats of varnish which is my tried and trusted method, although I shall be watching the other dock constructions, see how other methods turn out.

Meanhile I've been spending modelling time working off the board making up buildings and a small coaster.

If you haven't seen it, Marklinofsweden on youtube does a fantastic, simple method of making harbour water. In the end it may not be for what you want to achieve but it is worth a watch!

Thanks for the link Josh, very interesting and very realistic. Mine won't look that good, I'm going for flat water, the reason being I'm not going to stick the boats down as I want to be able to swap them around. If I have waves in the water my flat bottom boats will sit on the top of the wave.

No problem, I find some videos you can keep the information in your back pocket for later!
Being able to change or remove boats will make for some interesting play.

The coaster is pretty much finished, I Googled for pictures, came up with the one I wanted and sent the picture with a few alterations along with sizes to a friend who has a 3d printer. A week later along with a few other bits and pieces it arrived in kit form so needed painting and assembling. The tarpaulin isn't quite dry yet so not stuck in place. The cabin and bridge are fitted with led's. Once the quay is paved and bollards fitted I'll make up some mooring lines. I'm thinking maybe a small trawler might be next on the list but must crack on with the track laying first.
Dave 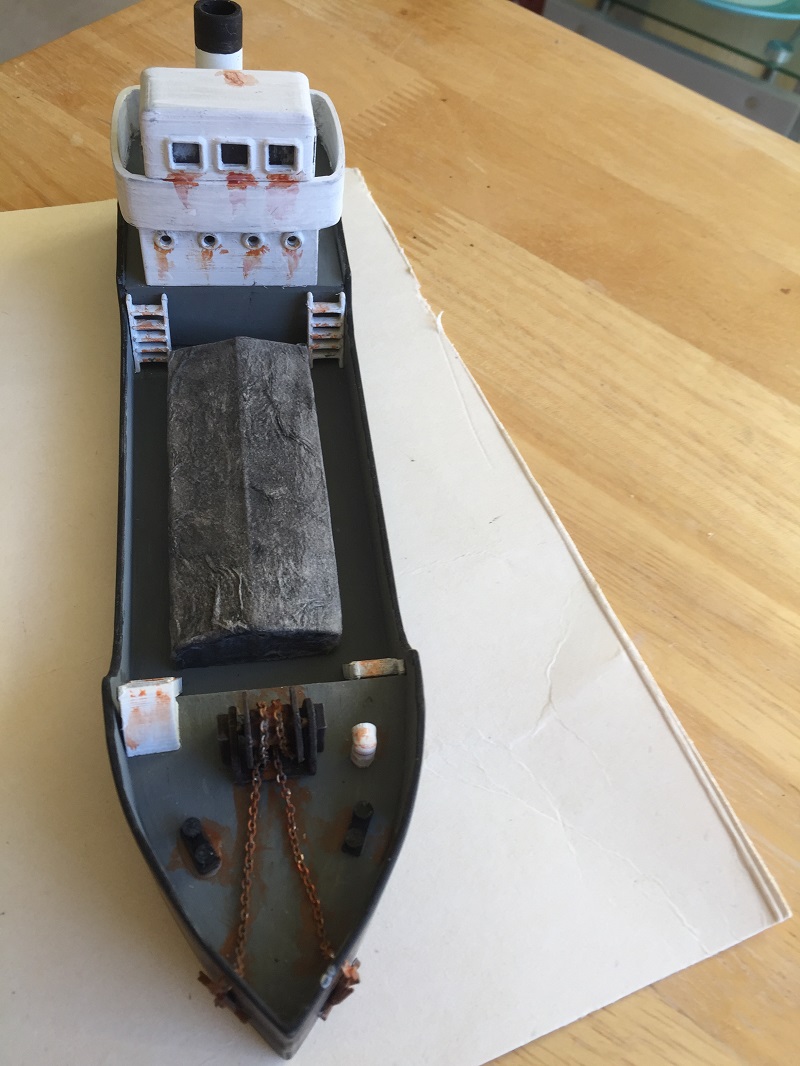 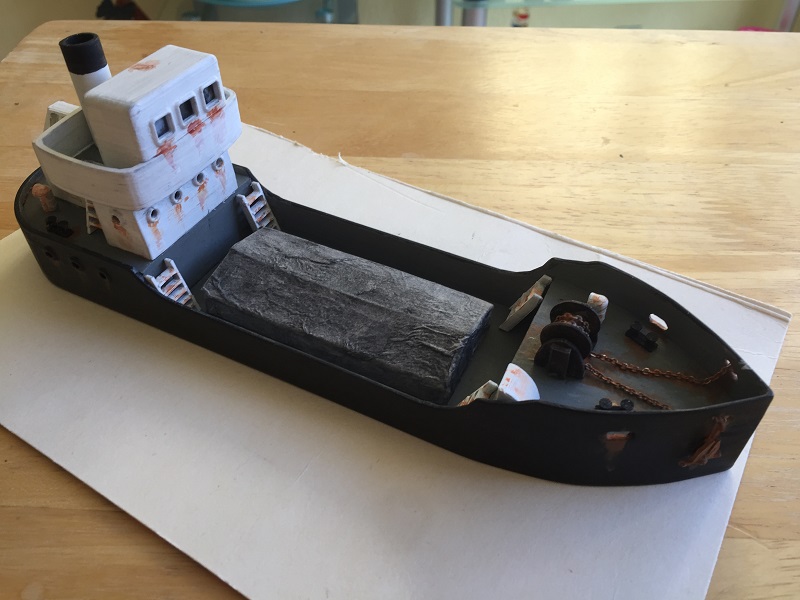 A nicely done coaster, and nice of your friend to help you out. I really must look at 3D printing one of these days.

Users browsing this forum: No registered users and 15 guests