Post pictures and information about your own personal model railway layout that is under construction. Keep members up-to-date with what you are doing and discuss problems that you are having.
Post Reply
77 posts

Looking good, reminds me of the 'Milk Dock' at Kings Cross, but with grass !!!!

Always funny when later somebody asks "How did you do that"
Trouble is with wiring you might have to go back through it.
The old MK Club Central Station layout was always failing and
I would short things together and get it working, but neither me,
or anyone else could remember what I did !!

Always reminds me of Maths at school - I'm a practical bodger
and could never get my head around algebra, what the heck do I
want to spend time working out what 'X' is ??? so was always
bottom of the class (well nearly) Yet geometry I was top because
I was finding out measurements that I wanted to know. Could
never work too well in the abstract.

Almost 2 months since the last posting, in truth not a lot extra done.
Partially because there was not that much left to sort out, but I had
run out of ideas.
Although looking a little odd the stairway up from the pedestrian tunnel
is at last being added. The old country lane now with it's stone walling
will soon be ready for permanently fixing and a gravel track surface laying. 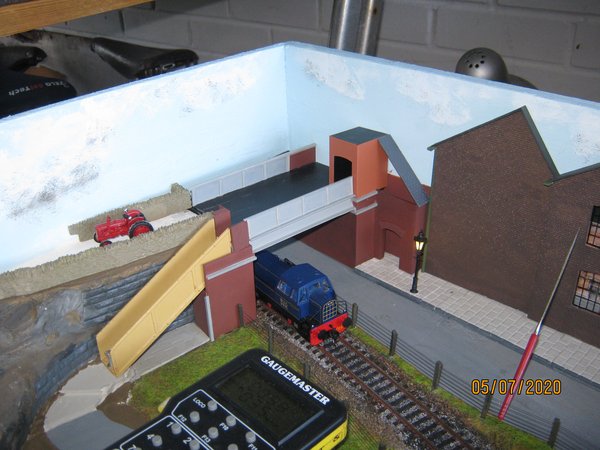 On the platform I have one of the RM free Ratio demounted van bodies. Also
found a building in Derry's stuff that had a damaged roof top. I've added a tile
strip, meant to look like a ventilated roof space. A retainer for the puzzle cards
built into the back wall boundary. The phone box is mine and not to be fixed on
this, but perhaps we'll get one. 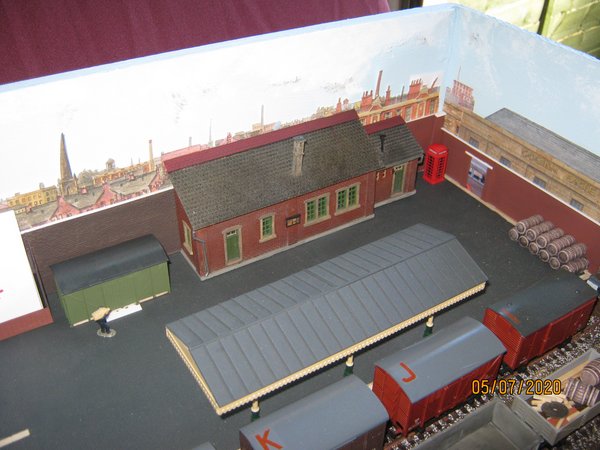 The overall look is still held back, but now I think I know everything that has to be
done and how I'm going to do it. 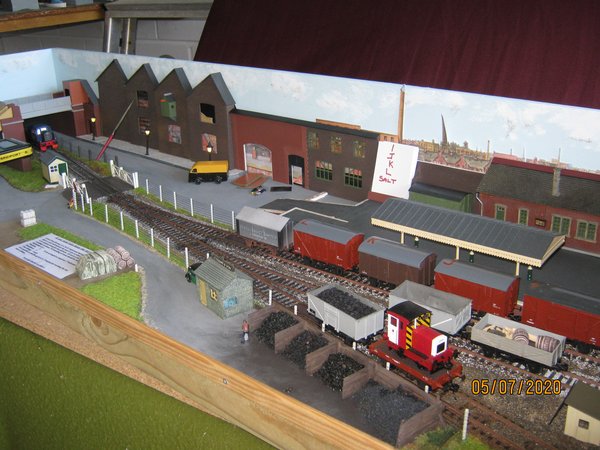 These shunting puzzles are great fun to drive and can look good.

Inglenook type layouts have stood the test of time, (Since 1924.) and great fun to operate.

Are you going to have 'little people' on the layout?

Coming on nice, but I fear the 'elf 'n safety mob will be tut tutting at that unbroken flight of steps
Growing old, can't avoid it. Growing up, forget it!
My Layout, My Workbench Blog and My Opinions
Top

Ha, Ha, Bufferstop,
Old people - not like me, will have to wait for the crossing gates to open. There is a notice to
go on the gates to say they are open between 12.00 & 14.00 Hrs and at random times through
the day to let road traffic cross. Otherwise use the footway bridge.
The gate keeper loves chatting up the young mums and unless shunting is going on will open
the gates for them. He probably IS the shunter as well

The scenery is incidental to the task of working through shunting puzzles. I've seen several shunting
puzzles that just don't 'cut-it' because they're little more than a board. The hope is this is good to
look at as well. Will it be looked after by club members who may take to exhibitions ? I hope so.

When we get back to club nights I'll have just one year before I'm off the committee and intend to
just do MY stuff. Time for someone else to take things forward.

Dad-1 wrote: Time for someone else to take things forward.

Keep repeating that to yourself Geoff, Lady W and I do but someone else is a very elusive character, and it's extremely difficult to let it all fall tp pieces for the want of a willing volunteer.
Growing old, can't avoid it. Growing up, forget it!
My Layout, My Workbench Blog and My Opinions
Top

Are these what you mean when you say 'little people' ? 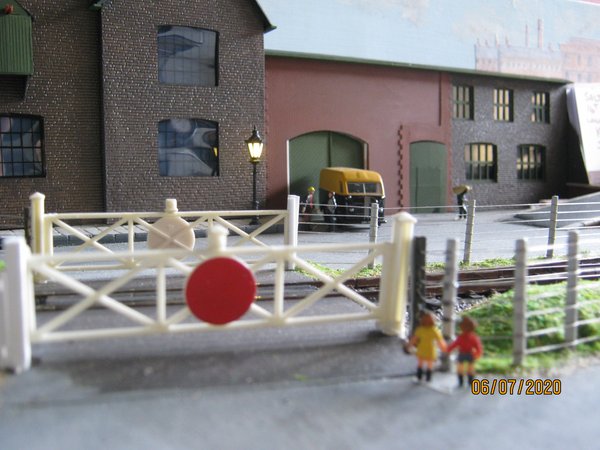 Where is Mum ? with a street light on it must be getting towards their bedtime ?
But Mum, watching them move wagons about is fun ! They make an awful lot of
noise.

Or just generally ? There will be a few, but not crowded - Remember social
distancing. Ahh that must be 70 years in the future ? 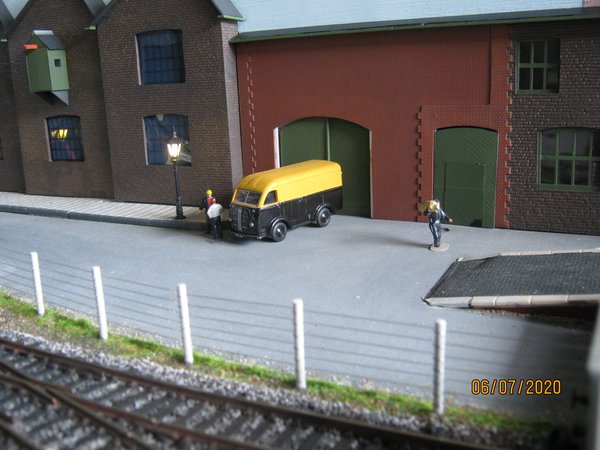 Bufferstop, It's the responsibility trap, they think they can keep you because nobody wants
to take the job on and a good working system has been your baby !!

Dad-1 wrote:The hope is this is good to look at as well.

It’s looking fine to me
Top

I'd not been 100% happy with the footway and steps up to the high lane. I added an
angled roof plus a few scraps of plastic, then with paint on I think I can live with it. 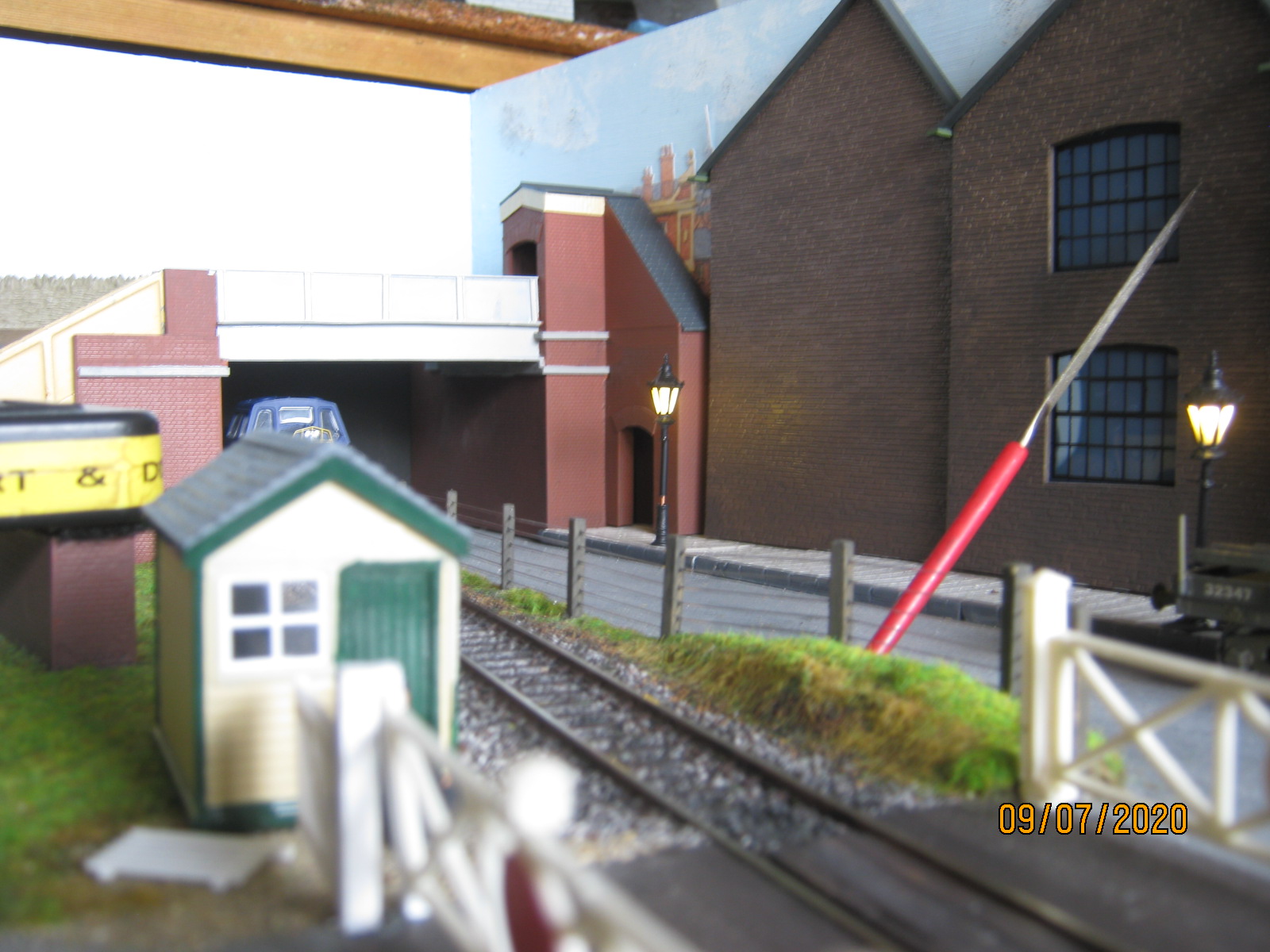 Once this section is stuck in I can secure the factory North Light walls and add the drain
pipes.

I have to ring the Village Hall tonight to see when we will be allowed access again, and
also question as to their policy regarding re-opening for club nights.
The club loco that is destined for this layout is locked in the village hall cellar and it has
a reputation of being a difficult runner so I want to proof test.

I wonder if these kids live locally, or could Dad work at the Brewery ?

Can't see much from down by the coal yard, wagons in the way. 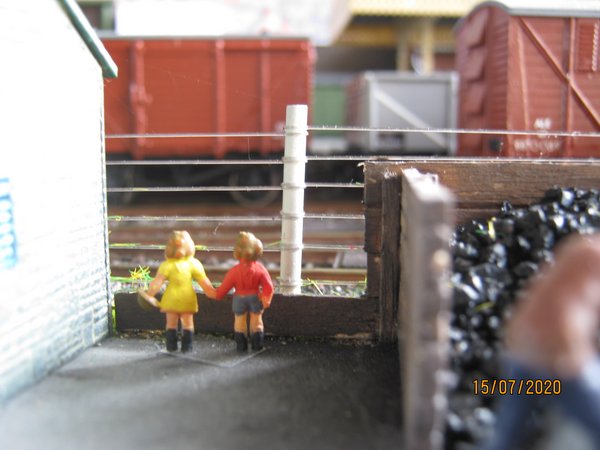 Can't use the crossing though 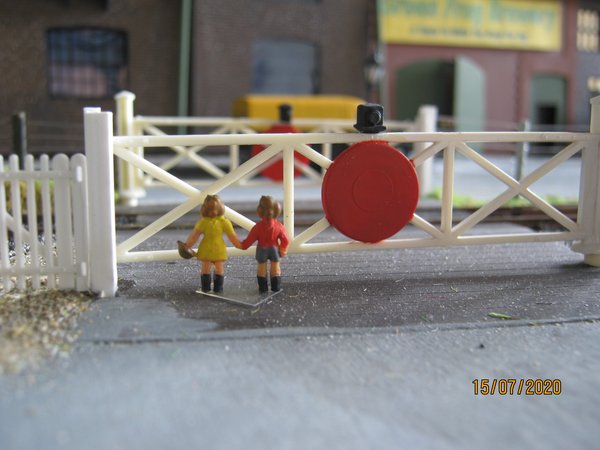 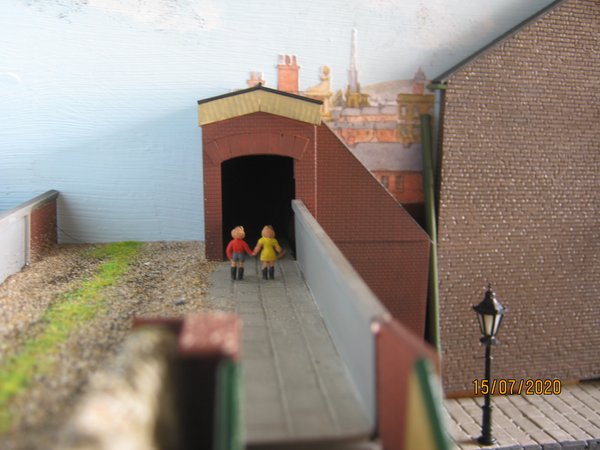 Down the steps on the other side ! 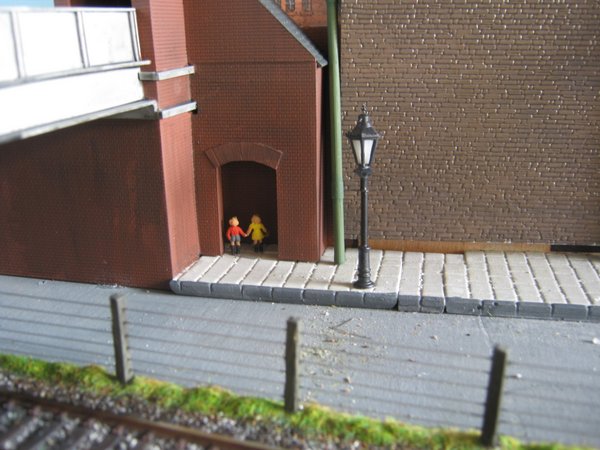 Do we really get a better view ? 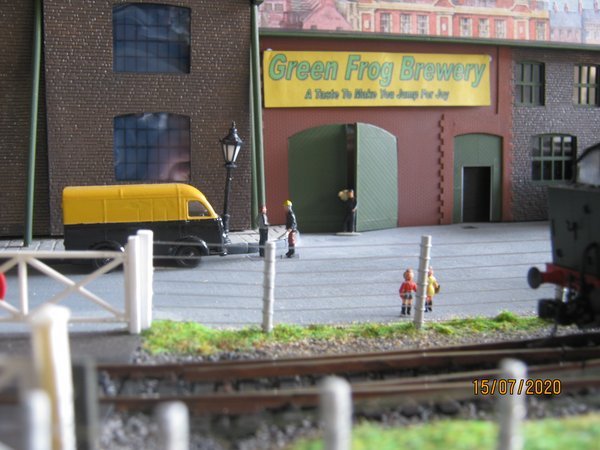 O.K just a silly game and a little spare time. I'm not impressed with these figures, but
have to use what I have.

After a couple of weeks I've made time to do a few more jobs on this layout.
I have been using it quite a lot because a good shunting puzzle should leave
you wanting another go !!

I found some black lace - Where from I have no idea, but it's one of those things
you collect with the idea it may prove useful one day. Well I decided after the
silly photo session with the children that the gaps in those crossing gates were
dangerous, too big, enough to tempt someone to crawl through.
Now fitted with mesh !! 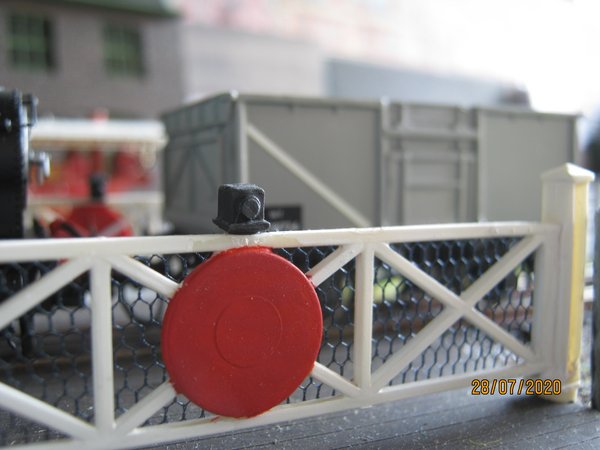 The gates were from a pile of inherited junk, only now I notice the lamp on this gate
had been put on the wrong way up !! Do I snap off and re-fix correctly, or rely on
anyone using it would be too bust driving to notice !! ??

They could do with a dirty wash as well, far too clean.

What is too clean, the children or the posts? Looks fabulous. Shunting layouts not done much in the USA, and this one looks amazing.
Nessie rocks!
Top
Post Reply
77 posts

Users browsing this forum: No registered users and 54 guests