Beaglington-On-Sea 00 gauge in 6ft by 4ft

Post pictures and information about your own personal model railway layout that is under construction. Keep members up-to-date with what you are doing and discuss problems that you are having.
Post Reply
149 posts

Mountain wrote:I love the engine shed. It looks ideal to use up space on the corner of your layout.

Ex-Pat wrote:Yes, the engine shed and coaling stage are a nice corner filler.

Thanks, I was torn between either having a short section of dock on an engine shed but decided on a shed because I had stuff to hand and wanted to keep the plan similar to the end to end version of this layout I had built previously. It's also nice to have my coal stage back on a layout, it's now eight years old, not bad for a bunch of coffee stirrers considering I've moved house 4 times since building it!

dan8400 wrote:Loving the coal and ash on the floor. Really sets the scene off. As mentioned above, it is a neat corner filler.
Nice job
Thanks
Dan

I've always wanted to have a shed with the grimy sooty ground that would have been there. I have now received the footbridge you sent and I've placed it on my platforms which has highlighted some height differences between the platforms which I'll have to examine. Thank you very much, I still need to give it a clean up. Pictures to follow hopefully.

ErlestokeManor7812 wrote:The ash and cinders on the floor by the shed look great, especially with the 14xx

Those LMS coaches are excellent, I've got three myself, they look great with your Patriot. Keep those updates coming.
Kenny

Thanks, I chose 'Holyhead' to buy because of the travelling between Ireland and the UK I've done from Dublin to Holyhead in the past. Apologies for lack of updates because I just haven't had to motivation to get the netbook up and running to do the work. One thing I really need for the layout is hanging basket liner, will have to see if its available cheaply online, I used to get it in Dealz (Irish poundland) but that was when I lived in a town and not in wildest Kerry in a pandemic

Thanks all for your compliments on my corner shed.
Alex
"I love the way you call it Art, When you never even use your Heart, and I just wanna tear you Apart"
Top

Well I hope I will get it sat properly, I very much would like to use it as it is what I envisioned for the footbridge in terms of architectural style.

Just a quick update while I sort out some other photos to upload. I painted up the grey poster frames that came with my Peco station kit in order to fit them to my station buildings, as well as a green bench and a blue bench from hornby which were a bit to platicky in their finish. 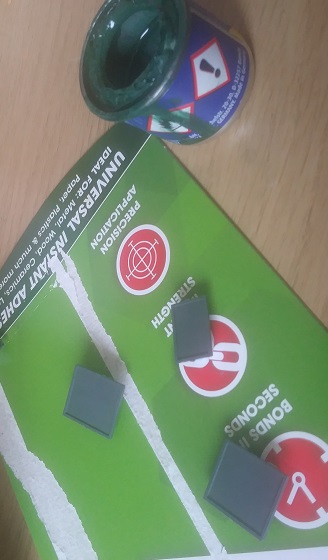 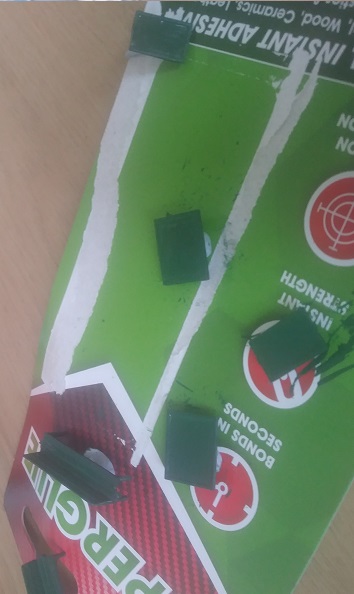 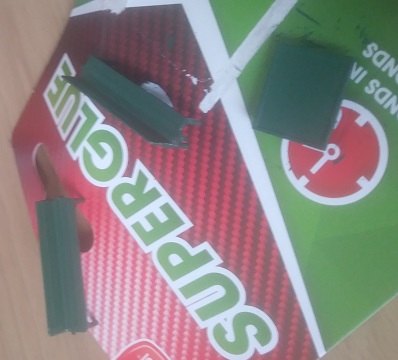 I fitted a Southern Timetable poster to one board and added it to the side of the station that welcomed passengers who have just come up the entrance ramp: 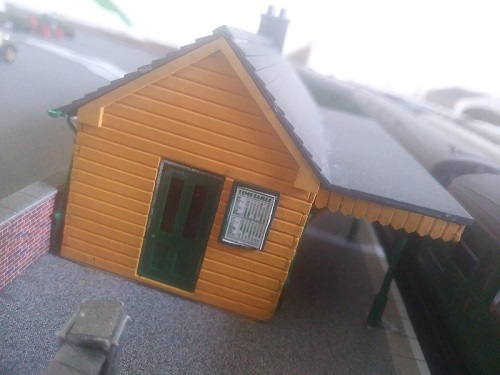 And now, eight years after taking similar shots on 'Tonglington Vale', 'Wimblebury' comes through the station with the LMS coaches, funny considering it is not the same 'Wimblebury' or the same coaches: 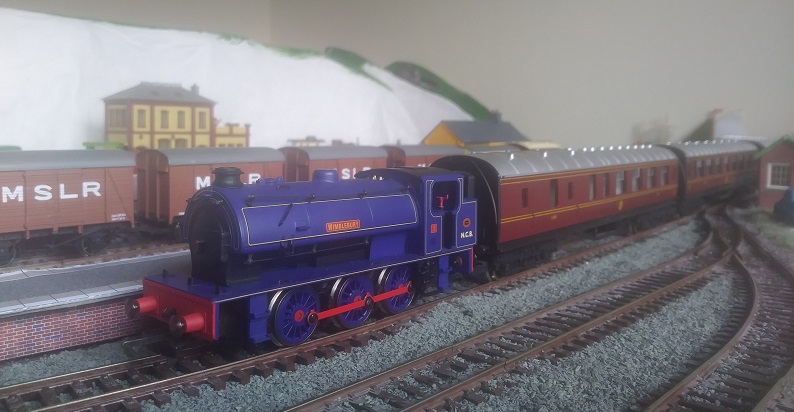 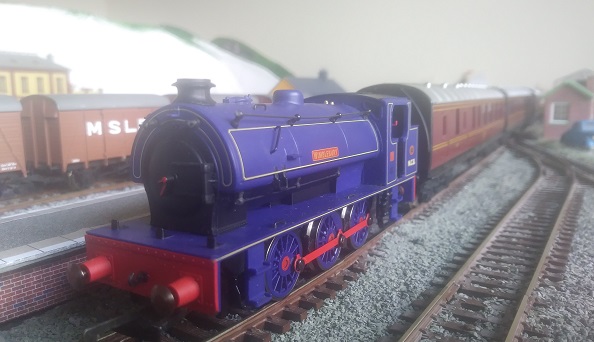 'Wimblebury' with some smaller relatives of his: 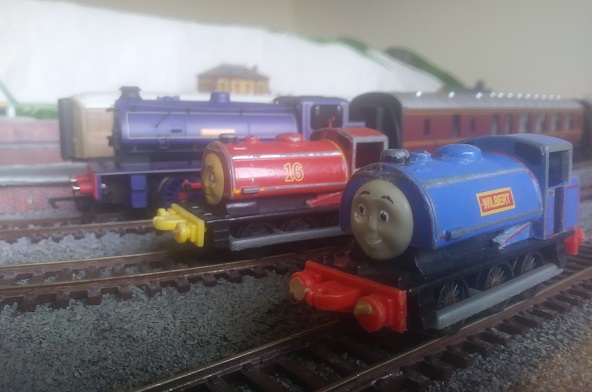 Thanks,
Alexander.
"I love the way you call it Art, When you never even use your Heart, and I just wanna tear you Apart"
Top

Here it is, finally passengers can access both platforms:

It rests completely on the platform in some positions and not in others, looks great though I think, still needs the dirt cleaned off.

Thanks again,
Alex
"I love the way you call it Art, When you never even use your Heart, and I just wanna tear you Apart"
Top

Looks great Alex. Better than it gathering dust under the bench in my shed. Pleased it’s going to get some use.

Time for another update, even if it is almost 1am, this one is about doing the road over the bridge. I had to level up the bridge deck with more metcalfe platform strengthening strips: 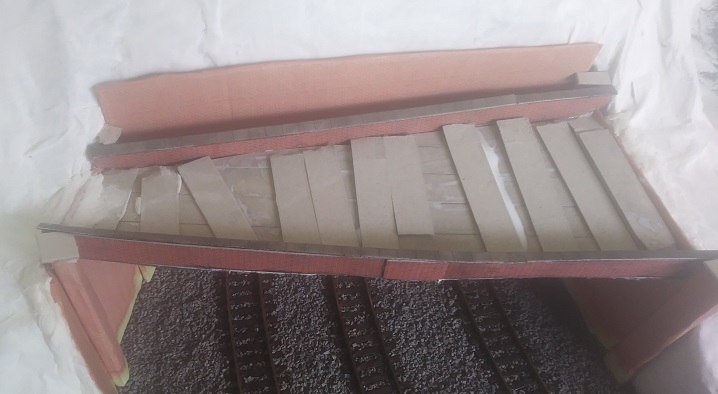 Then using toilet paper mache on the outer ends of the bridges for levelling and paper for the road surface on the bridge and down the hill, I painted the lot with a grey tester pot and around the corner to the pub: 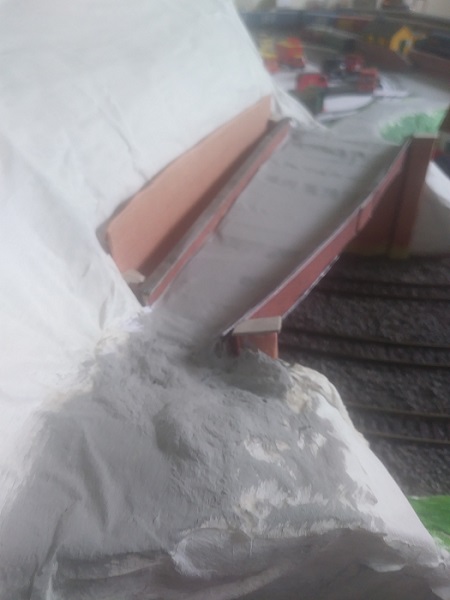 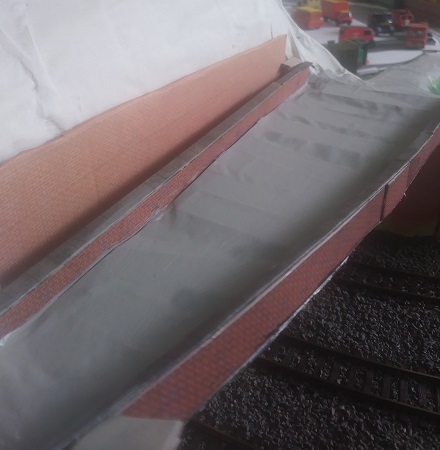 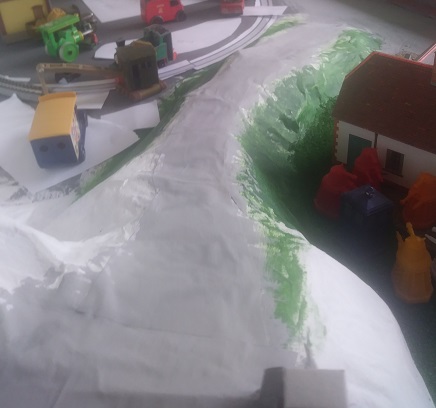 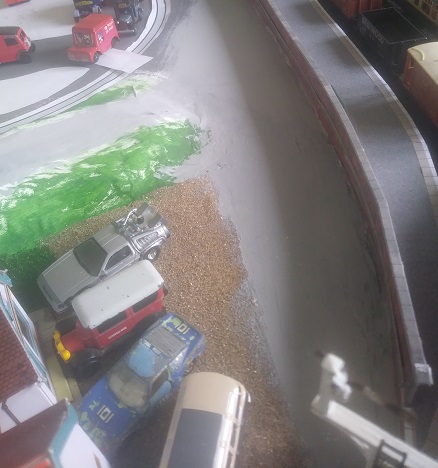 Then I finished the platform shelter restoration with two poster boards: 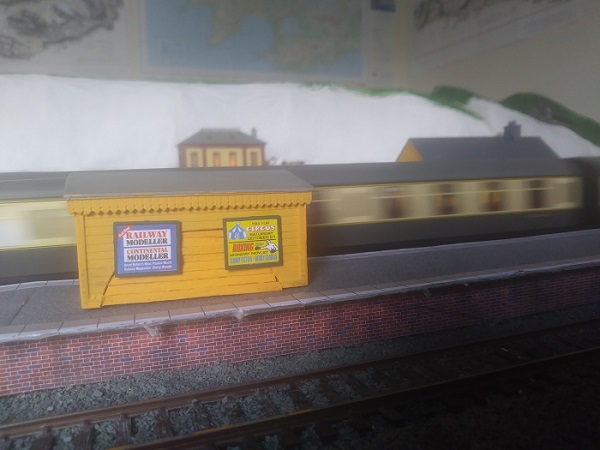 I also added an advert for Paignton to the front of the station: 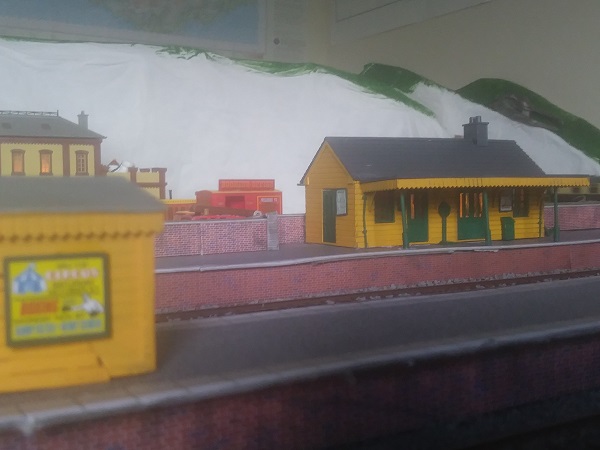 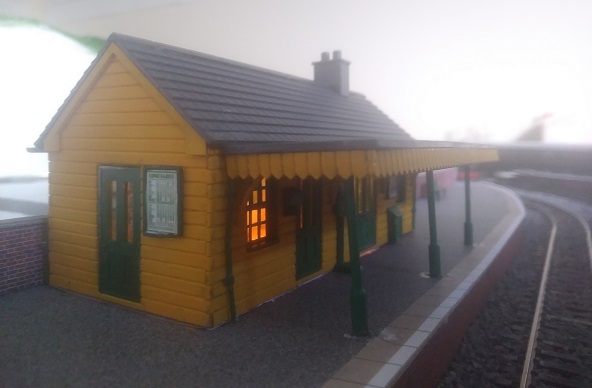 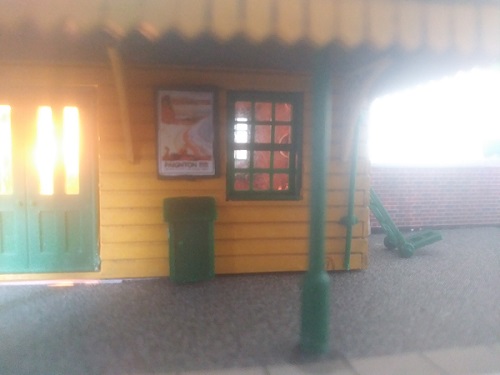 And a shot of the station from the corner of the room where you enter, with my 48DS in the background: 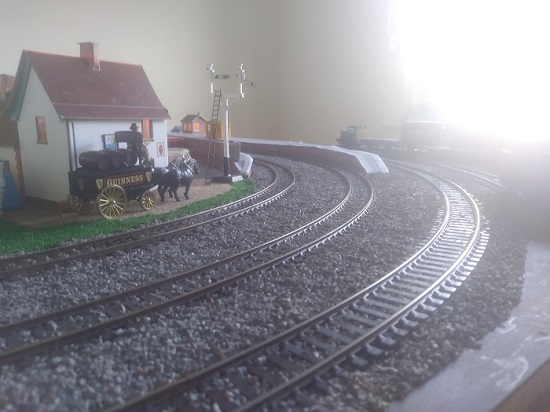 That's all for now,
Thanks again,
Alexander.
"I love the way you call it Art, When you never even use your Heart, and I just wanna tear you Apart"
Top

Lovely work that is well done.

The footbridge fits in well also.

The footbridge fits in well also.

Thanks! I haven't had the resources to do much more on the layout really so I've been looking into stock acquisition and maintenance and just trying to enjoy running trains.

Alex.
"I love the way you call it Art, When you never even use your Heart, and I just wanna tear you Apart"
Top

Little update here.
I decided I would try and get my Dad's old 37 and 47 running again, they always seem to have issues, I can get the 47 to run around the 2nd and 3rd radius loops now but only facing one way, or the axles on the trailing bogie fall off the track. The class 37 had been getting weaker for years and couldn't move itself and eventually stopped working. It turns out that one of the brushes/springs was coming away from the motor assembly and the whole motor assembly seemed to be coming apart. A lug for securing the two halves of the motor had snapped (Probably decades ago) and slowly the sides had seperated until the point where the motor had stopped running, I rubbed superglue onto the inner faces of the halves and held them tightly together for a long time and then when it was dry I ran another line of superglue along the join/crack out the outside of the assembly and now she pulls like a tractor should, very pleased to have them running again. 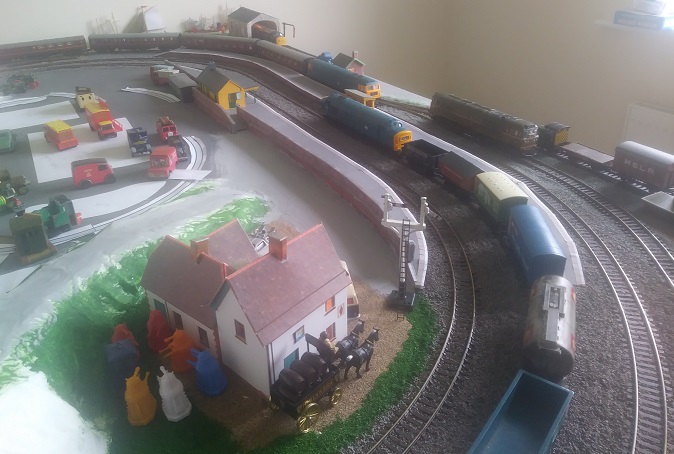 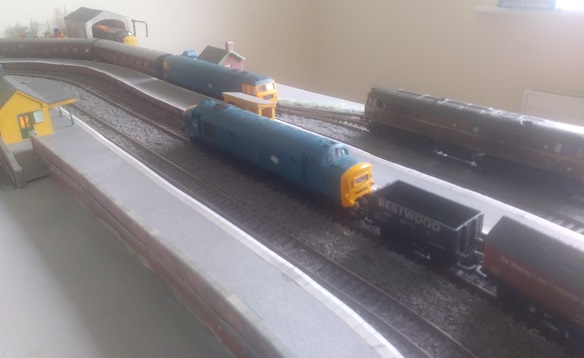 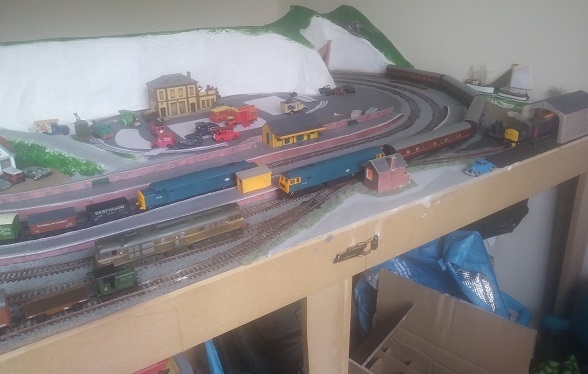 The 37 is pulling wagons that were my dad's as well, the 47 isn't because I don't have the mk2 coaches anymore as I previously had to sell them, I'll get some in future I expect, wouldn't mind some blue & grey mk1s as well...


Anyways, while it was sat on my desk during a stock change over I noticed a detail I'd missed on my Hornby Ivatt 2MT 2-6-0, on the tender moulding there are coals that have been modeled as if they had missed the bunker in the tender and I may just have to paint them black. I can't believe I never noticed before haha. 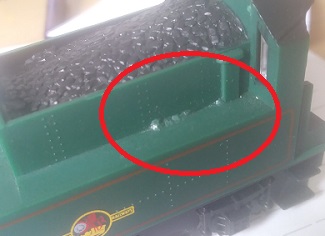 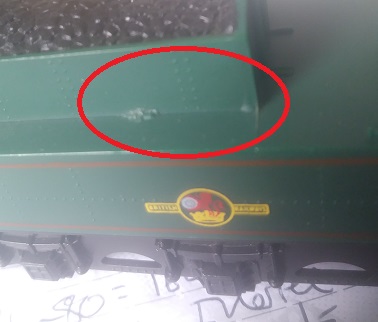 Thanks for reading,
Alexander
"I love the way you call it Art, When you never even use your Heart, and I just wanna tear you Apart"
Top

New Arrival! I was lucky enough to purchase a Hornby B12 in BR early black, No.61520, and it has been custom weathered! What makes this really nice is that the locomotive is from my neck of the woods, or my old one at least, having spent time at both Norwich and Ipswich sheds. It arrived like this:

You may be wondering what it is wrapped in, and I can confirm it was indeed pages from the Railway Modeller 70th Anniversary issue, not a bad idea considering its hard to get out these days to buy packaging, and it is recycling, and Railway Modeller is a rather hardwearing magazine, I have a copy from 1952(? might be 51) still in alright condition, covers a bit rough.
The box:

And the engine out on the line: 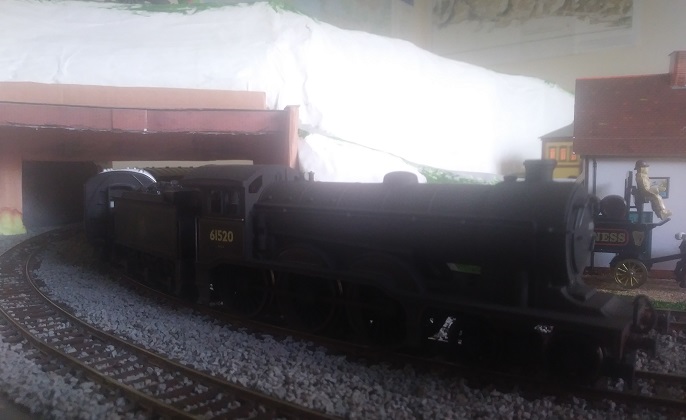 Pulling in to the platform at Beaglington-on-Sea: 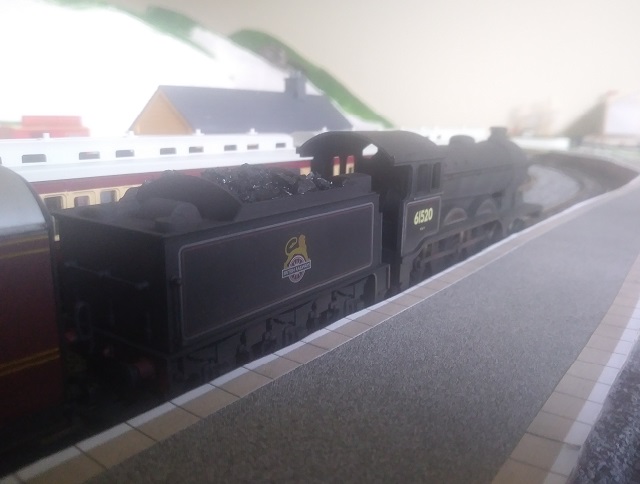 As you can see it has had real coal fitted to the tender. 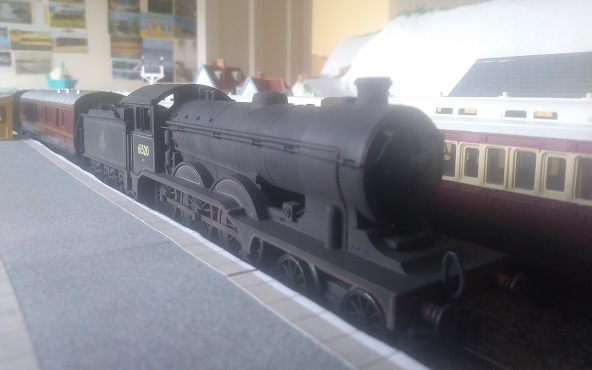 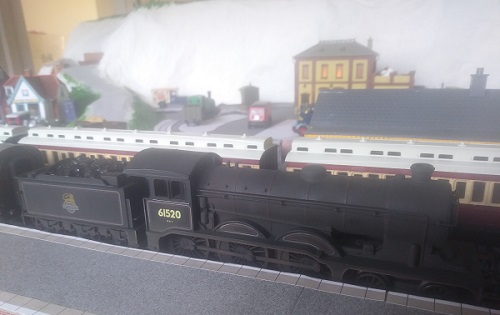 She was then coupled up to some coaches, of which I had owned some of previously with a BR early blue B12 from a set called 'The Anglian' and had purchased some again. It's a nice local BR service: 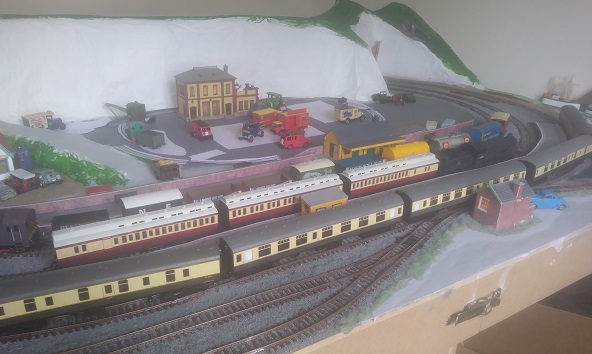 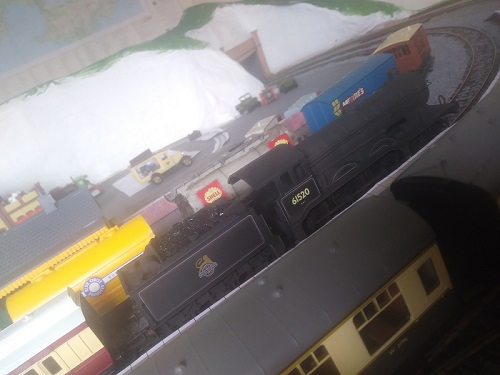 That's all for this B12 post.
Thanks,
Alexander
"I love the way you call it Art, When you never even use your Heart, and I just wanna tear you Apart"
Top

Must have been nice to get your dads old stock running again. It’s always good to have a play. I often get carried away with scenery or making things that I forget how much fun it is to just run trains.

You have quite a fleet of locos now

And as Dan said, great to get something of your Dad's running again - a bit of nostalgia!
Old N layout
0-16.5 workbench
Micro 0-16.5 layout
Top

I endorse Dan and PNPs comments.

Sometimes modelling can take precedence and we forget why we have a layout in the first place.

I'll reply to you all tomorrow maybe.

Right now I'm majorly Foxtrot-Uniform-Charlie-Kilo-Echo-Delta off because my 14XX '1424' Hornby Railroad 1400 class 0-4-2 locomotive that I bought in a real model shop in Bury St.Edmunds earlier in the year, a rare new purchase in an actual shop alongside my dad - the first time we'd been able to browse a model shop together in years, has died.

I had hardly run the loco, although it had been fine, and decided to run it in before June, because we'd booked a holiday last year in Cornwall for June this year and now that we won't be able to go I thought I might invoke the feel of the Western Region holiday traffic by using my 14XX (and the autocoach I had bought for it) alongside my Hornby Railroad 'Helmingham Hall' . However after about 20 minutes of use the 14XX came onto the scenic section from under the road bridge with smoke streaming from the cab windows and stopped with its goods train in the station, smoke now pouring from the cab and upsetting the children. (They were not happy with the smell!).
So now I have no 14XX to run AND no trip to cornwall FML!

Oh and when I tried to get the body off one of the cab handrails snapped off at the top and bottom. SAKE LIKE. (It looked fine inside btw)

Sod Hornby and their 100 years of buying and repackaging other companies products.

but if it was new it should be under guarantee and eligible for replacement. If not new, the shop may offer a (free?) repair service if you post it to them? I'm sure you can get it sorted...
Old N layout
0-16.5 workbench
Micro 0-16.5 layout
Top
Post Reply
149 posts