Post pictures and information about your own personal model railway layout that is under construction. Keep members up-to-date with what you are doing and discuss problems that you are having.
Post Reply
149 posts

I haven't done a lot on the layout itself as were making the most of the nice weather but I've been pottering about with various bits including rebuilding the last of the buildings.
The next job on the board will be to add rough grass and trees to the land beside the depot. I don't feel inclined to spend a lot of money on trees and can't be bothered to make my own so I use the cheap Chinese offerings but they don't look good, all the same shape and often a bright green so I've attempted some minor surgery. Some I cut in half then cut out the middle section of branches before glueing the top back on, this gave shorter rounder trees, others I cut in half and added the extra centre giving a taller thinner tree. A brush with pva and a sprinkle of scatter then when dried a light spray with dark green and to finish a touch of light green here and there.
The finished thing isn't anywhere near as good as expensive trees but at 20p – 30p each and with very easy to do mods I think very acceptable for a wooded area.
The picture is of the first half a dozen now drying, I'll post a better picture of them on the board once there stuck in place,
Dave 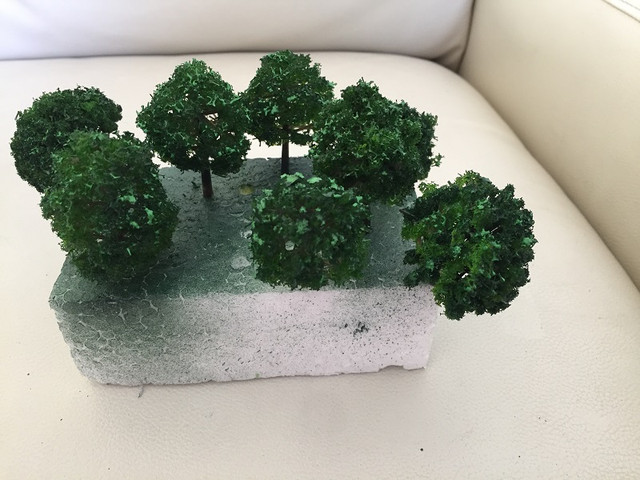 They don't look cheap anymore, nice job. I got a chunk of polystyrene just like that, it's got the skeletons of 3 apple trees on it which seem very slow growing!
Growing old, can't avoid it. Growing up, forget it!
My Layout, My Workbench Blog and My Opinions
Top

Thanks Bufferstop, as I said they are nowhere as good as the expensive ones but a lot better than then green toilet brushes that they were.
Dave
Top

The postman brought me some goodies today, headstones, gates, fencing and other bits and pieces.
As the headstones were grey I decided just to give them a light brush of green to represent moss and stick them in place. The lych gate isn't stuck down yet, that's a job for tomorrow followed by putting some grass down.
Dave 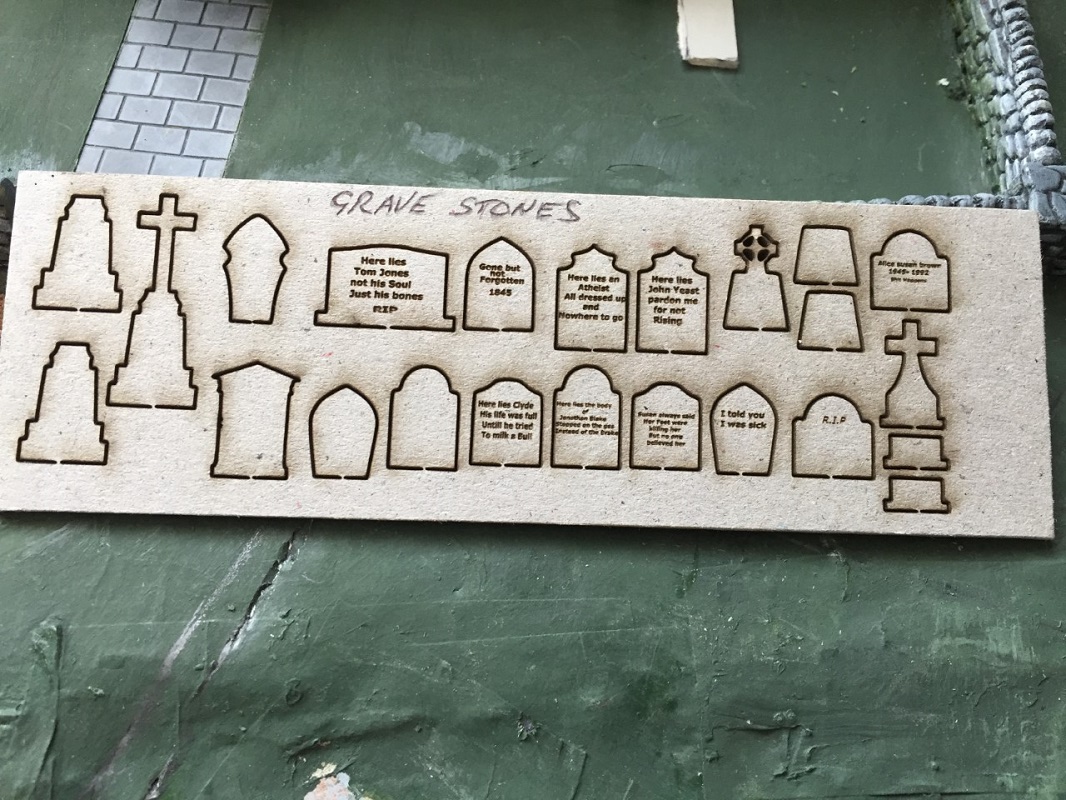 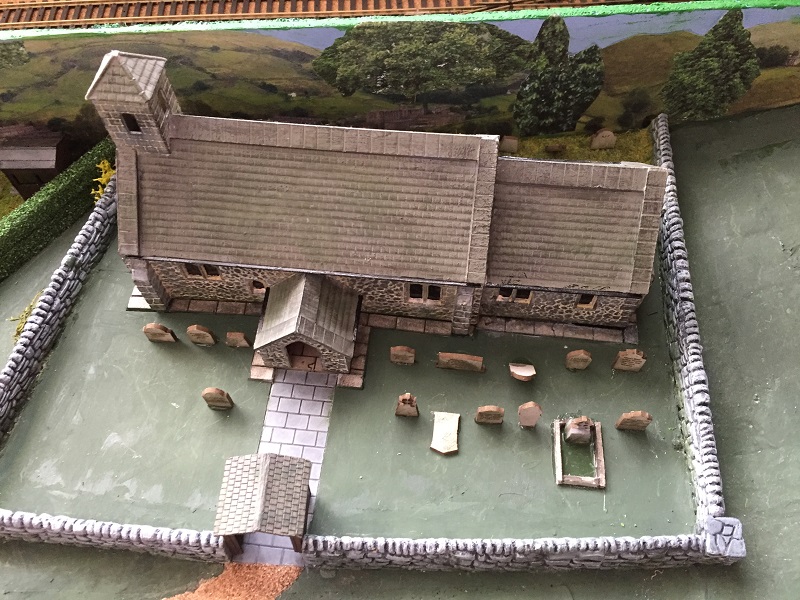 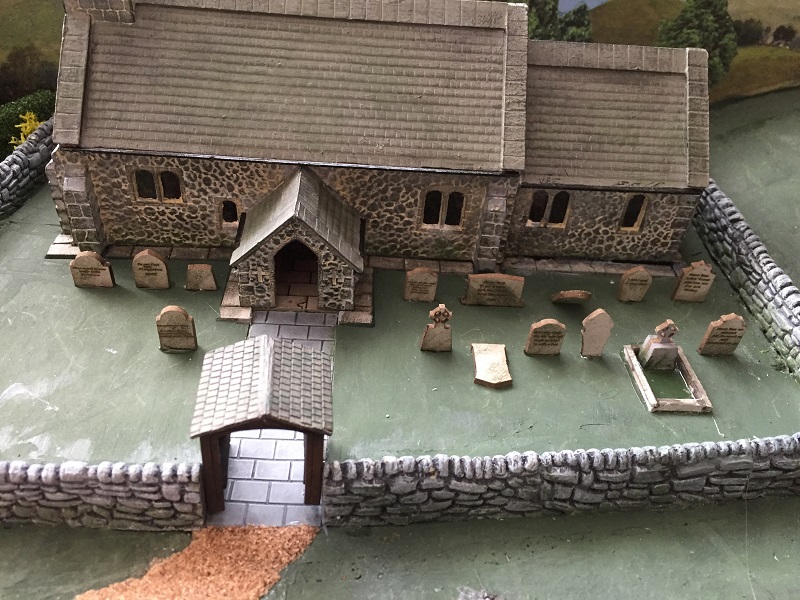 The churchyard is about finished, I stuck some masking tape over the newer graves on the left before covering it with static grass, then once the pva had started to set added a slightly greener grass to the graves to give the impression that they are newer and better tended. Also some coloured sawdust to the grave on the right. I will put some flowers by a couple of the headstones once everything is dry.
Dave 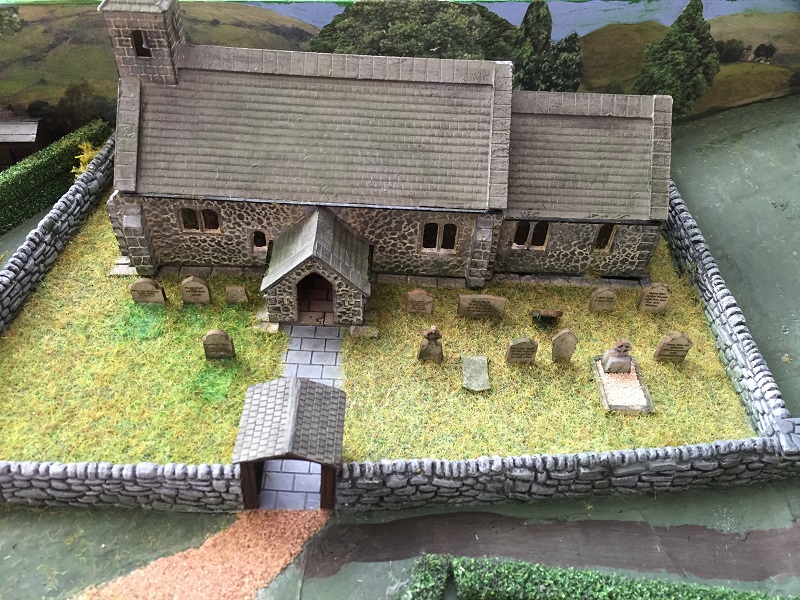 Looking good there heda.
Its quite surprising how good the old Airfix Church can look.
Top

Thanks Dublo, I bought the church as part of a job lot a while ago on ebay for around £10 including postage. All the buildings needed various amounts of work doing and some are still undergoing restoration, overall I'm quite pleased with the results. There not true to scale but, to my eyes at east very acceptable.
Dave
Top

A bit more progress, crossing gates and lineside fencing added, greenery will (hopefully) hide the gaps. I also put more ballast outside the tunnel entrance to follow the line of the fence.
The second picture is the view of the village so far from a different angle. Compact due to squeezing a lot onto a small board but I think it's starting to give the impression of an English village.
Dave 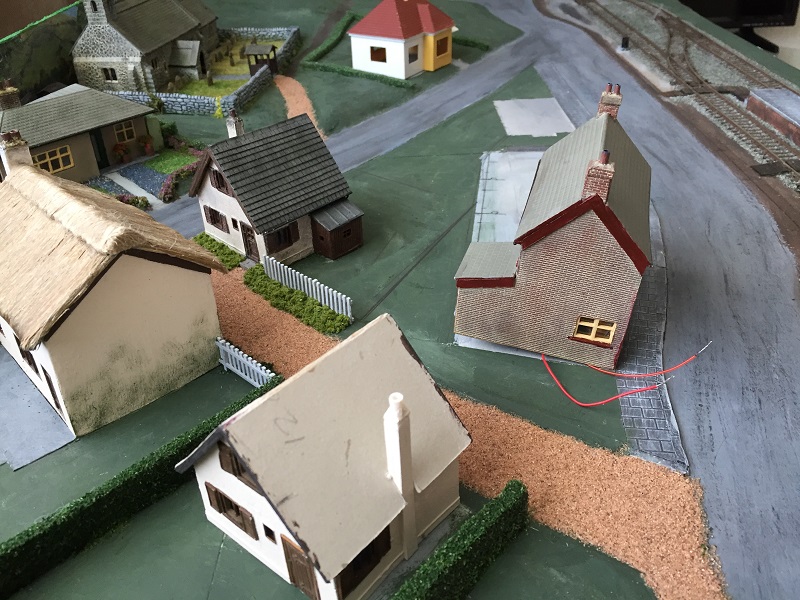 Another garden finished. Shrubs and flower borders were made using my usual method of coloured sawdust, cheap and quite effective. The compost heap behind the greenhouse was a blob of filler painted and covered with static grass without using the applicator. The fruit bushes are the ends of branches snipped from a cheap Chinese tree.
I will put more trees in the wooded area at the back and the house at the front is still undergoing restoration.
Dave 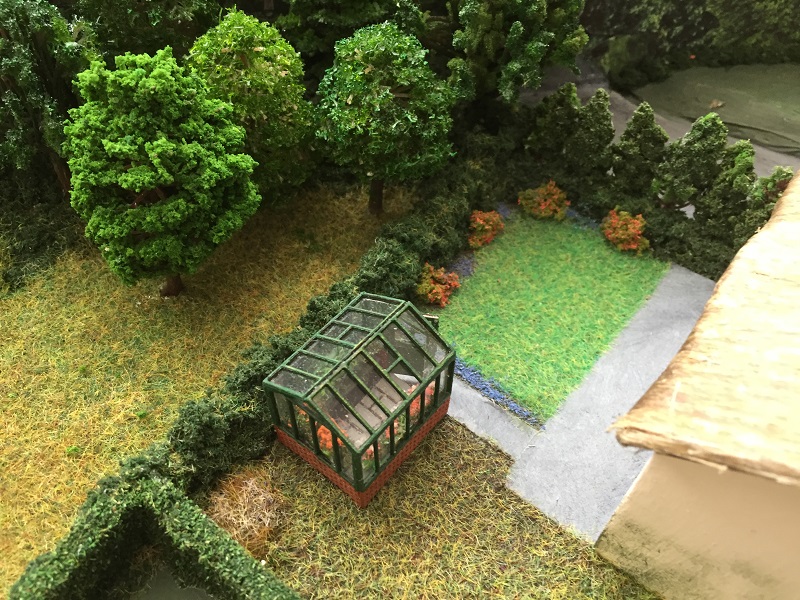 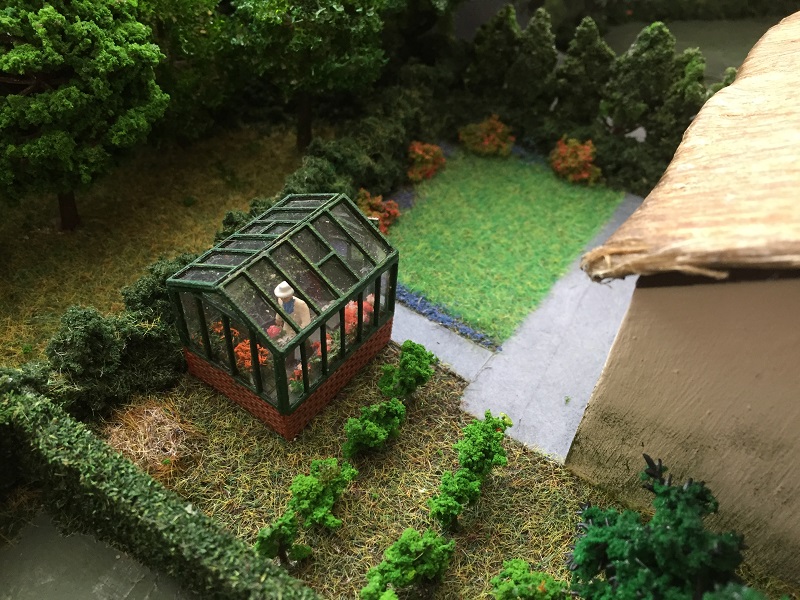 Thanks chaps, maybe I should have taken up gardening instead of railway modeling as a retirement hobby !
The trees are the cheap Chinese ones, I cut a couple up and add the bits to other trees to give them more bulk and change the shapes slightly then a light dust with green spray to change the shades. Not as good as the expensive ones but I think there acceptable.
A recently won Coopercraft Monarch chassis and cab on Ebay arrived today so another project begins. Is it just me but I always seem to start things before finishing what I'm already working on.
Dave
Top

The latest project has been building the Cooper Craft Monarch, Everything was sprayed with primer then red while on the sprue. The body and chassis assembled and the chassis painted black. Pictured in front of the shop to see how to scale it looks, I'm quite happy with it. The windows and headlights still have to be fitted, also the body will have to be scratchbuilt. I'm intending to park it outside the pub unloading barrels but I'm not going to glue the roof down yet in case I change my mind and put it on a road somewhere.
Dave 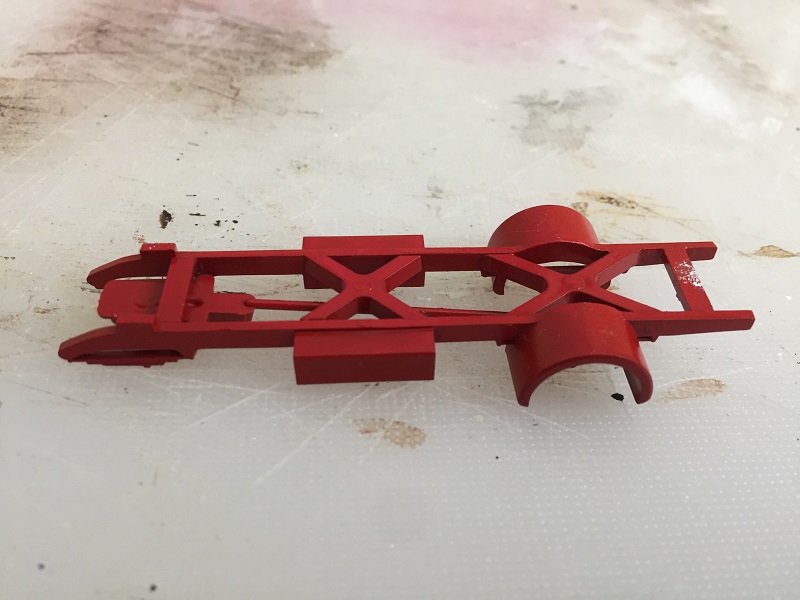 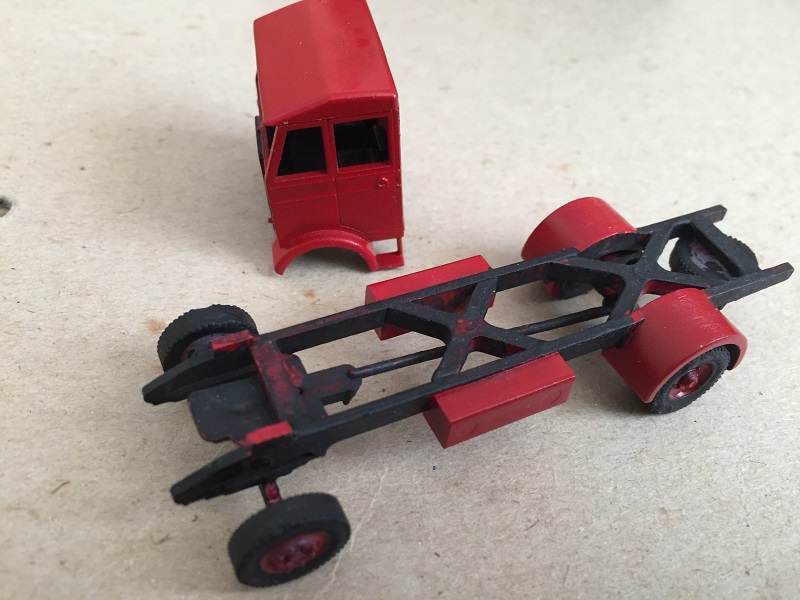 A lovely model well made.

I agree with you not to stick it down anywhere. I too like to 'ring the changes' and place vehicles in different places on my layout.

There is some truly impressive modelling going on here. I like the improvements to the cheap trees. I may have to borrow that idea. I will need a lot.

The gardens are very good and the lorry is very well made.

Top job, keep it up