Post pictures and information about your own personal model railway layout that is under construction. Keep members up-to-date with what you are doing and discuss problems that you are having.
Post Reply
196 posts

He runs on a Locos N Stuff power bogie, which needs a bit of weight to achieve good performance. Hence some lead was put into the front of the boiler (leaving room for the decoder) to counter-balance the usefully-heavy whitemetal driver. A also added some more lead strip around the bogie underneath: 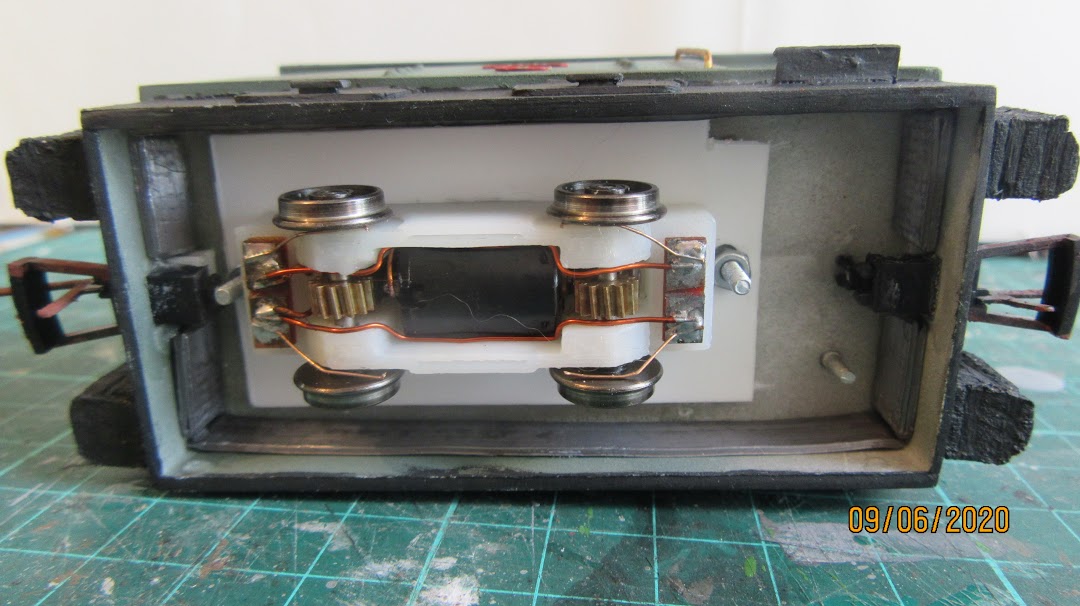 When I weighed the complete loco it came to exactly 100g!!!

Anyway, it runs nicely including at slow speeds though is rather noisy; probably the shape of the loco acts as a soundbox

Here is the loco at Bychan: 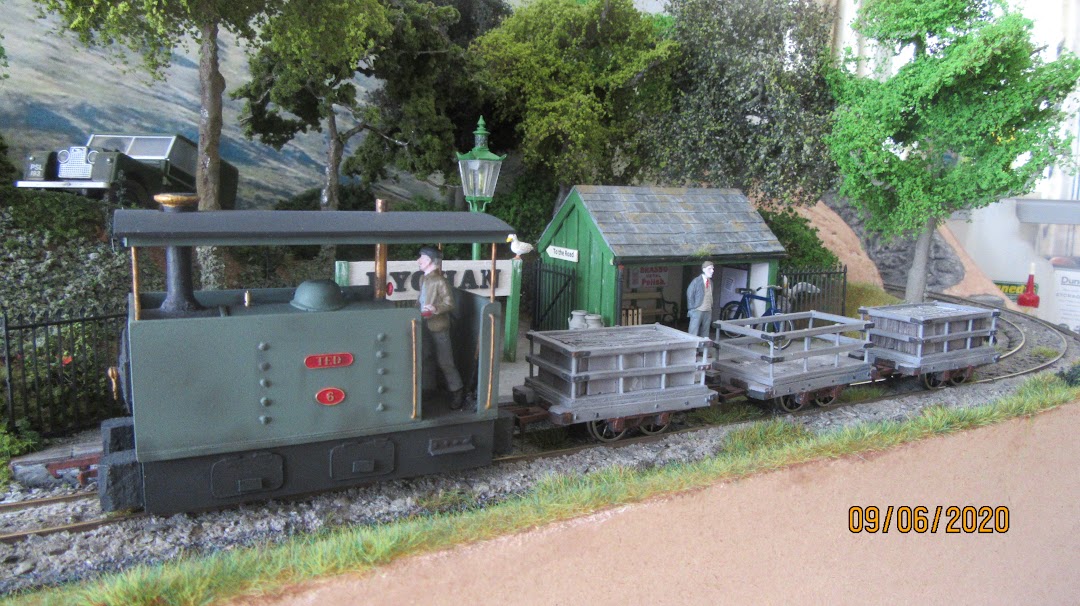 As you can see, clearance is tight under the road bridge just the way I like it! - it's almost as if it was designed that way 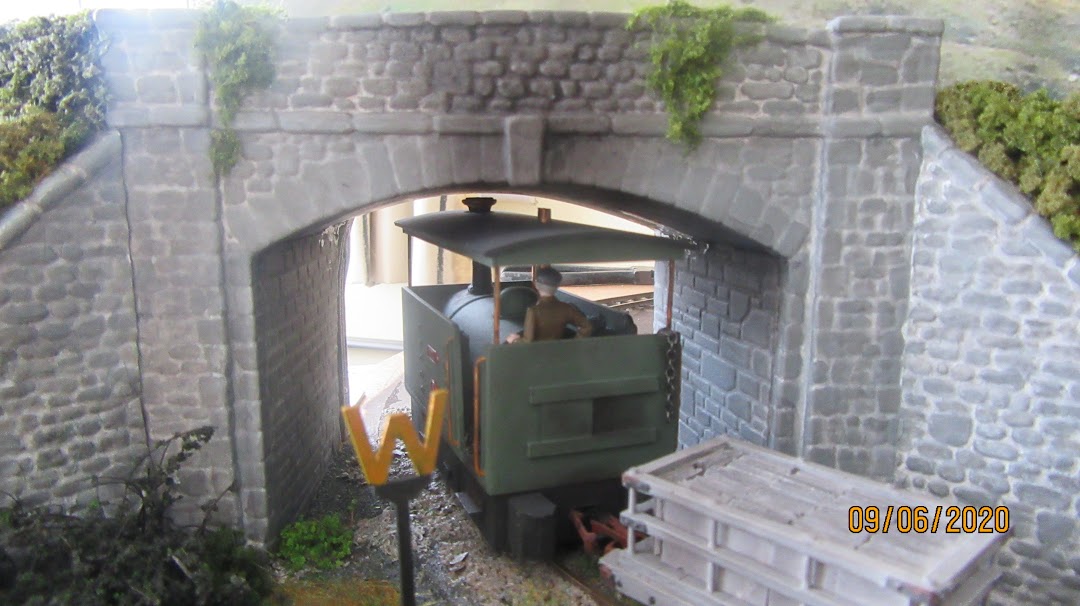 PinkNosedPenguin wrote:As you can see, clearance is tight under the road bridge just the way I like it! - it's almost as if it was designed that way

As the saying (these parts), 'Tight? Tight? Bags a room, mate. Yer c'n gerra! double deck bus under there.'

I have made a start on the river.

First a PVA flat bed was laid down, which I then painted with acrylic greenish colour to allow watercolours to 'take': 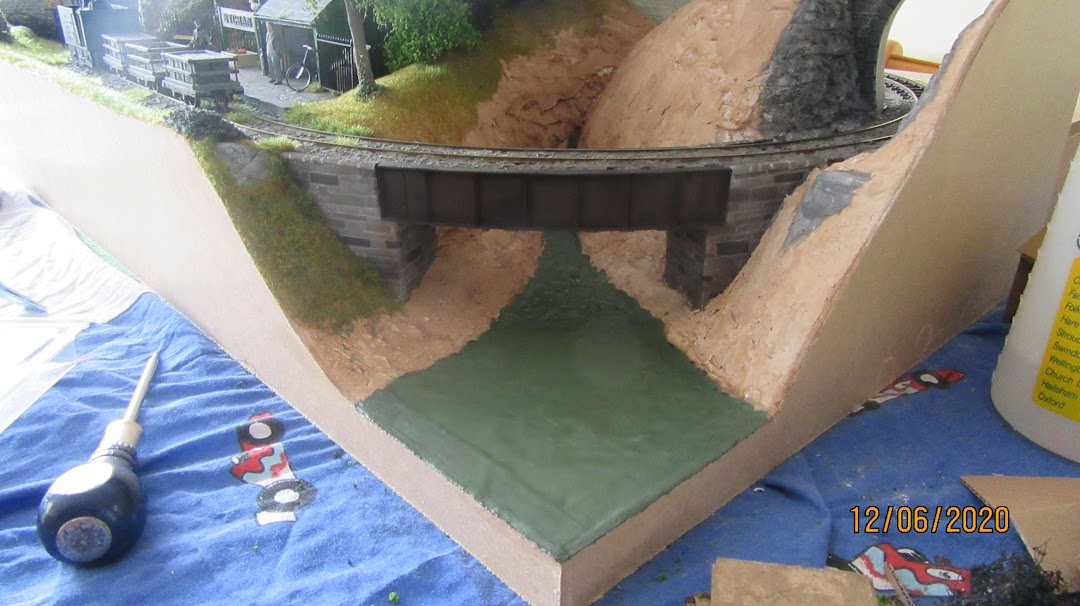 Watercolours where then stippled on using green, blue and brown, lightened with white where I wanted to suggest shallower water: 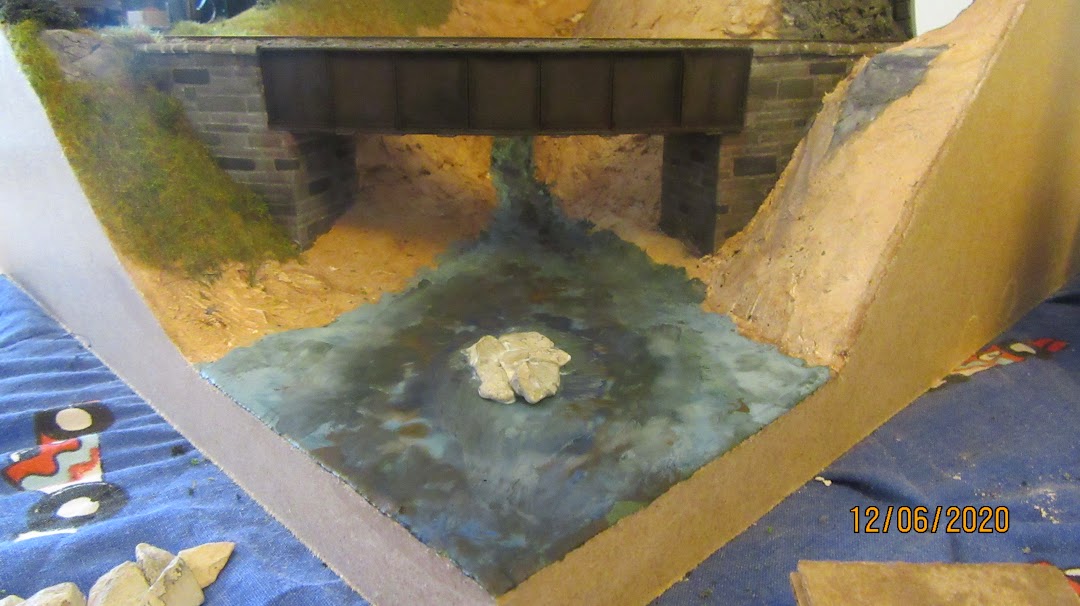 I am now adding PVA (the sort that I know dries transparent) to give the illusion of depth. The first layer was quite thick, but did (eventually!) dry transparent, so I have now added a second layer. Hence although it currently looks a bit like this, I am confident it will dry looking a lot more like water, and a lot less like thick cream 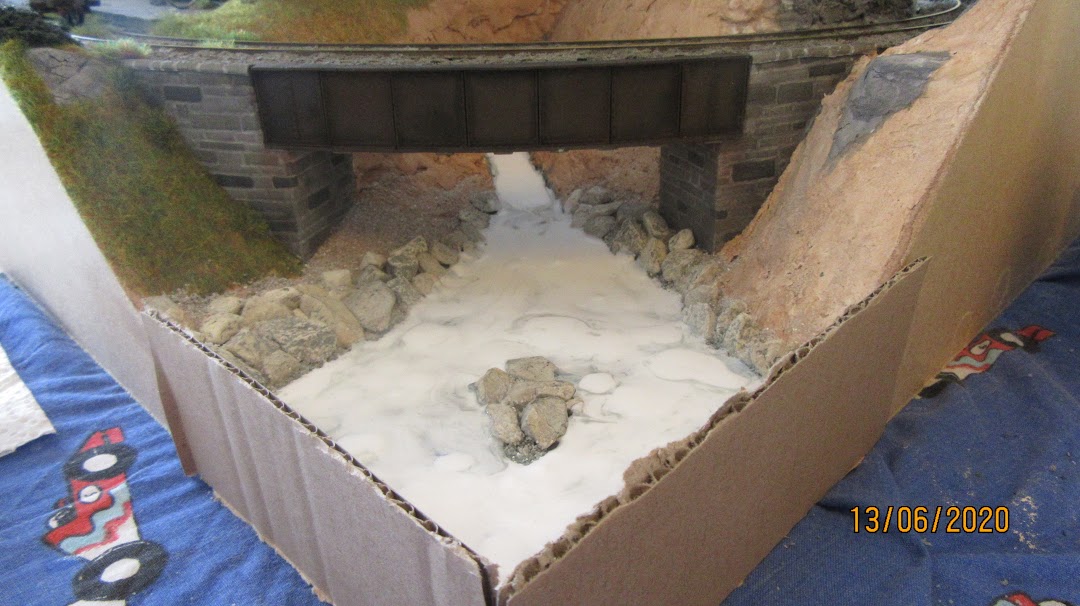 My rate of modelling will now reduce drastically, as my extended 'holiday' (officially known as furlough!) will be cut short by two weeks on Wednesday, when I have been asked (today) to recommence working

PinkNosedPenguin wrote: I am confident it will dry looking a lot more like water, and a lot less like thick cream

Been there, PNP, with my puddles at Clarence Dock. They looked like thick cream even the local 'moggies' were eyeing it up.

Fortunately all is well.

Carry on the good work.

That stream looks pretty neat, looking forward to seeing it when the layers are dry.

Well, after quite a few days (!) the PVA has finally dried, and is thankfully clear

. So, before any further treatment it is now looking like this: 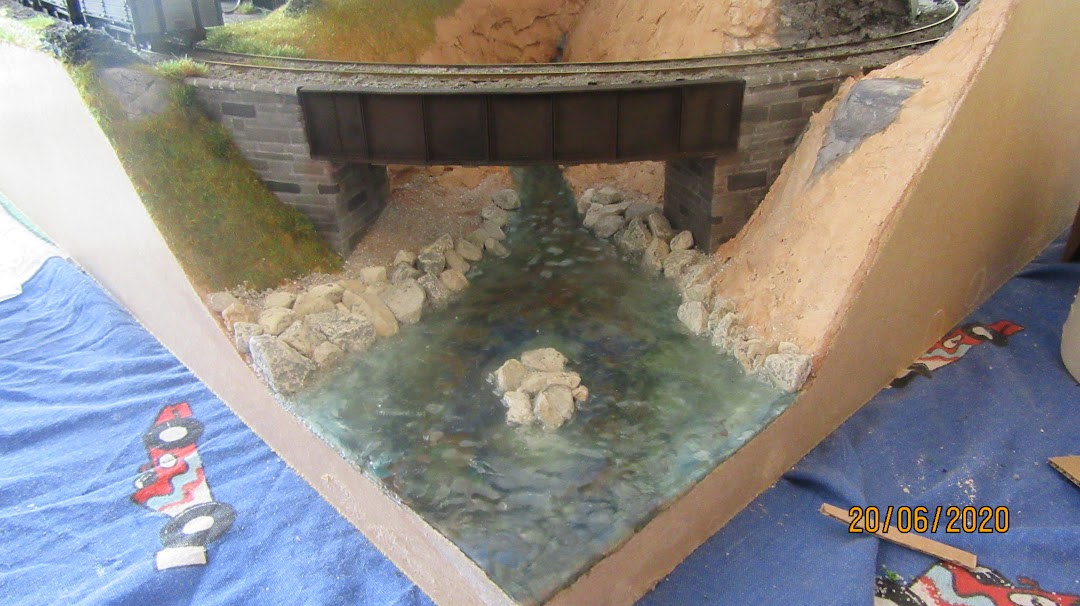 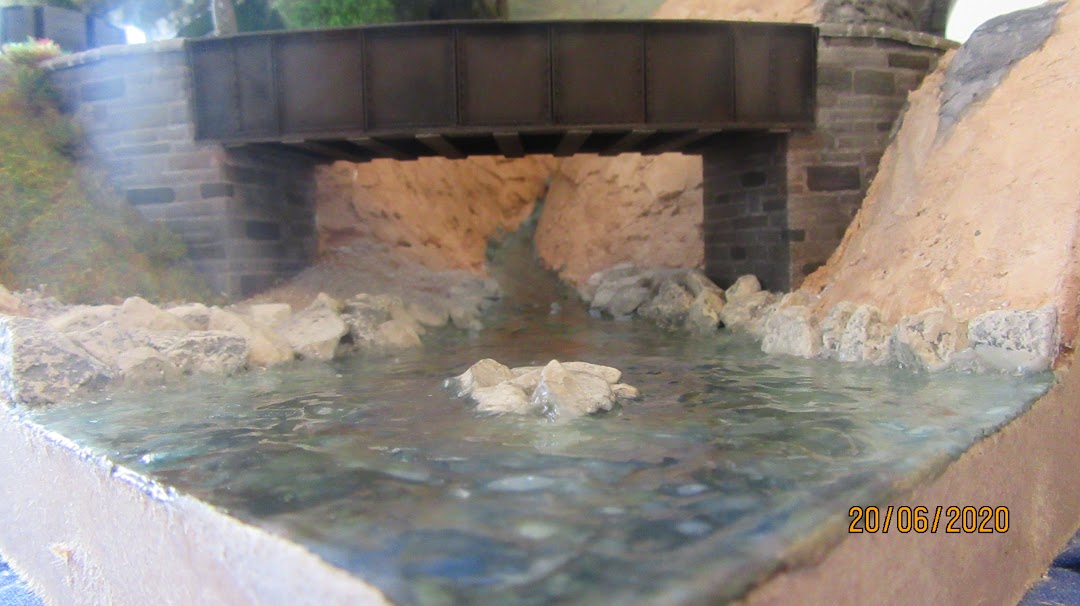 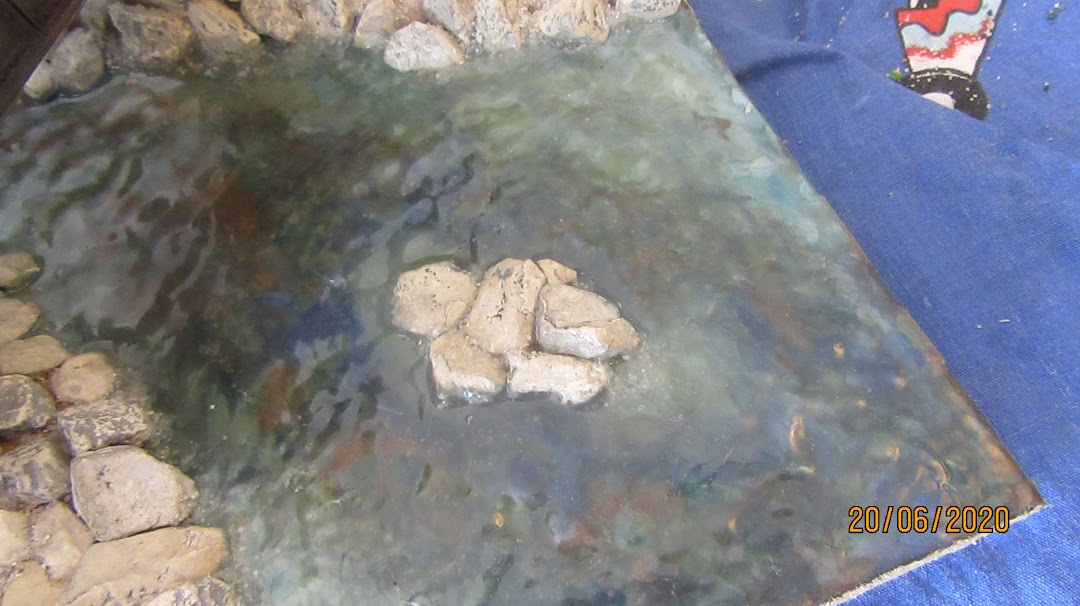 The colouration is purely my stippled watercolour paint underneath, in which I tried to create lighter (i.e. 'shallower') and darker (i.e. 'deeper') areas. It has some undulations in it, although I was actually expecting it to look flatter than this - but I'm not displeased with the effect. I have some Woodlands Scenics 'Water Effects' which I can use to add a bit more texture, and 'rapids' higher up the stream . . .
Old N layout
0-16.5 workbench
Micro 0-16.5 layout
Top

That water looks really good - nice to see alternatives to expensive water resin. The river bed painting has emphasised the depth as appropriate too.
It just goes to show that the right PVA can be just the job at a fraction of the cost. I've found clear varnish also works in a similar way.

What was the brand of PVA you used as I tried this once and it seemed to be slightly yellow when it dried very thick?

That looks great as it is. Don't be too tempted to do too much more to the water. It is good just as it is. I say this because it is easy to overdo things. It is looking great!

I echo alan_r and Dublo.

Just one thing . The water will run on to the floor.

Wow, so many comments - thank you all very much

alan_r wrote:What was the brand of PVA you used as I tried this once and it seemed to be slightly yellow when it dried very thick?

It was Woodland Scenics 'Scenic Glue', so a bit more expensive than 'normal' PVA, but worth it because the PVA I normally use (bought cheaply in bulk) definitely does NOT dry transparent when ladled on thickly!

Mountain wrote:That looks great as it is. Don't be too tempted to do too much more to the water. It is good just as it is. I say this because it is easy to overdo things. It is looking great!

Thanks for the warning, but too late (!) I have dabbled with some 'Water Effects' now

. However I have been quite restrained . . .
Wasn't sure what you meant about the racing cars at first, and then realised they are on the old duvet cover of my son's that I am using to protect the table under the layout (he's a bit old for it now at 22!).

Anyway, so I 'planted' some (white metal) ducks and then added some of the Water Effects where I wanted waves, wondering how they would look once dry 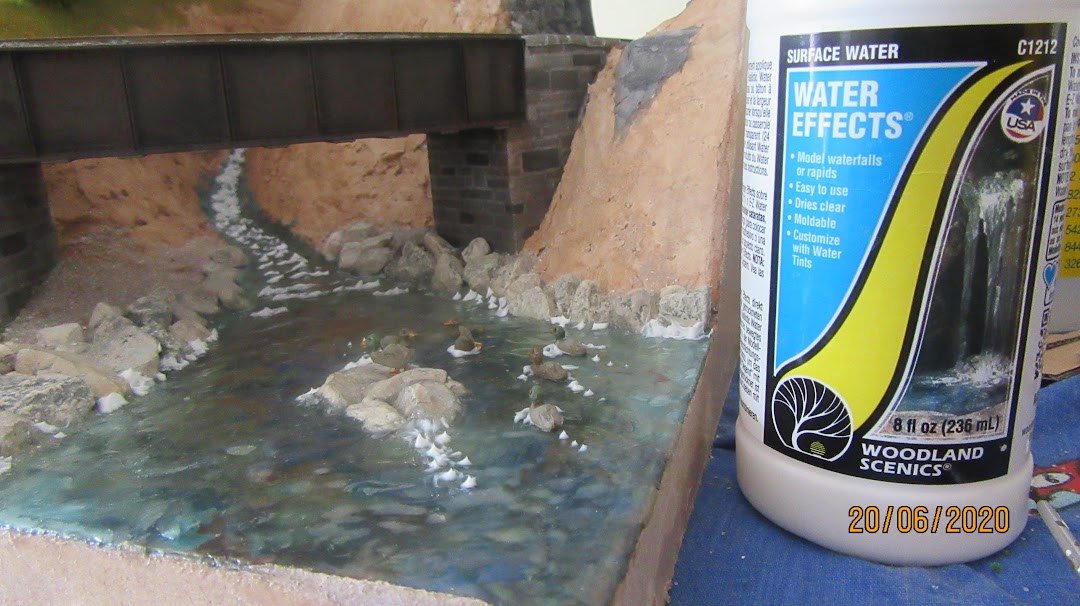 This is how it looks when dry, and dry-brushed with a little white paint to represent white water. I though that, without that, the undulations were not very visible: 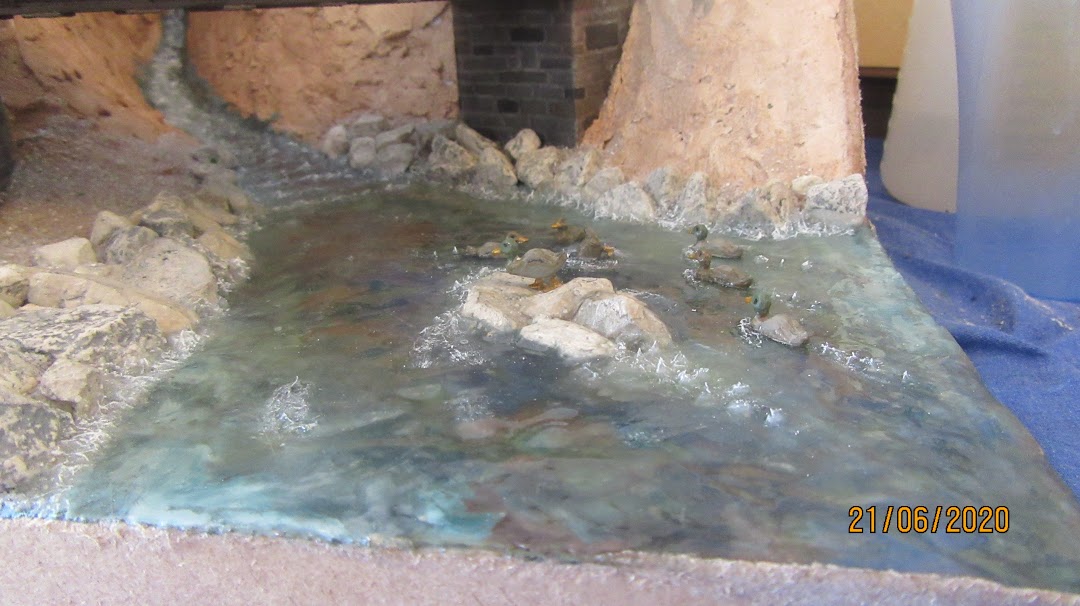 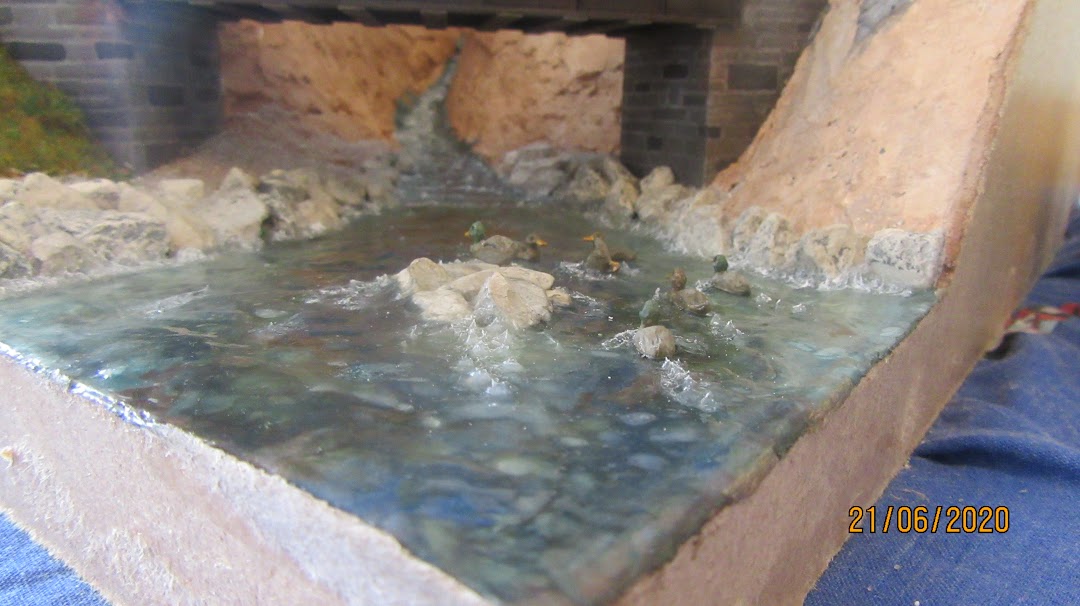 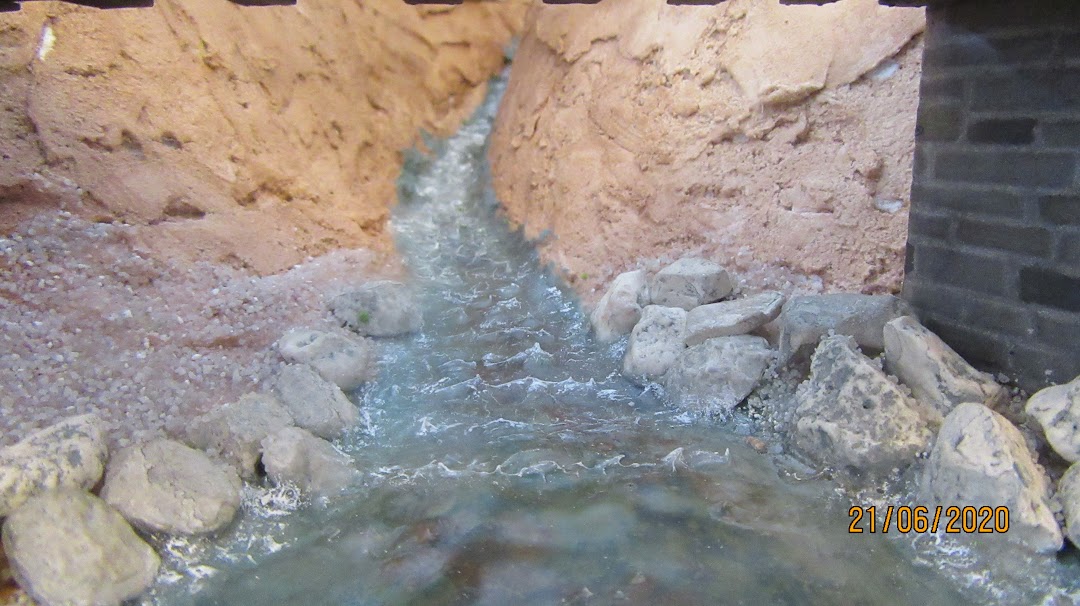 Hopefully it succeeds in suggesting movement of the water (esp. around the rocks and in the steeper area upstream) and the ducks

Always a relief when 'Water' comes out O.K. One of the difficult landscape
skills. This project is certainly stretching your skills and must be quite satisfying.

That water... I can't stop looking at it. It is brilliant.
There is only one very small detail that I believe can be changed to get it perfect, and that is the water just behind the stones in the middle, as I have noticed that choppy water only happens when it goes over stones... But if stones stick up, the water just behind them tends to be calm and flat, and the water eiter side of the area behind the stones becomes choppy in a type of V shape if that makes sense? (But I would be very reluctant to change this minor detail as it may be difficult to do without ruining an otherwize beautiful scene. It is rare to see such a realistic water scene on a model. If it were possible to change, flattening out a small section of water right behind the stones and then leaving the other half choppy behind might be the easiest solution... But don't try if it would damage the scene. I could easily want to bathe in that water!

).
[Be aware I made the small comment above realizing that I am not sure that my efforts come close to your realistic scenes... Though I am considering using a water effect on my layout].

The water behind your ducks is absolutely brilliant, and the cascading water is really something!...

Someone asked what make of glue you used? I want to know as well! It is soo realistic looking! You are quite a 3D artist! I can see that your little 7mm narrow gauge layout was definately the right way to go!

Question. How are you finding tension lock couplings on your curves? I was also thinking that if a square shaped plate be glued onto deepen the tension lock at the front just below the hook, it would look like a chopper coupling, but would such a plate cause issues? It is just a thought as I had been toying with the idea in the past before I started experimenting with drawing pins.
Modelling On A Budget ---》 https://www.newrailwaymodellers.co.uk/Forums/viewtopic.php?f=22&t=52212
Top

Brilliant job of the water, PNP! That’s the same product I have in my wishlist to use ... the effects are stunning! Love your work!
Top
Post Reply
196 posts