Well this layout is destined to be back to our club rooms next week.
In theory still much to do and I'm still deciding IF these Ratio coaches will be
given, or perhaps loaned as and when I finish them.
The brake configuration is somewhat different to that in this picture, although
the following two are exactly right ! 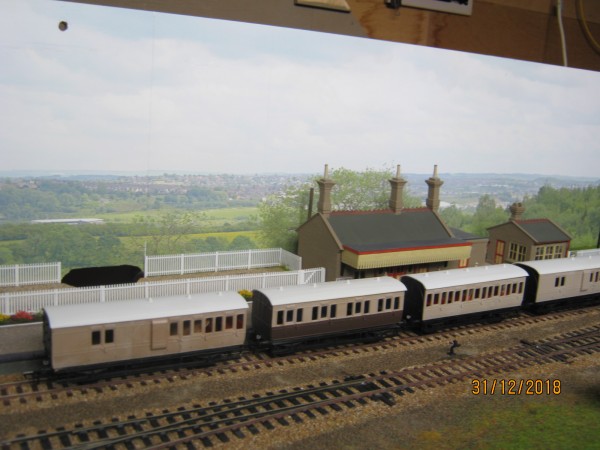 by joshv8
Nice work on the ratio coaches. How do these compare once assembled to general off the shelf items? Ive owned a few kit built wagons that Ive bought pre assembled over the years and over all have found the quality a bit hit and miss.

As you say it'll be very variable. As good as the skills of the modeller who makes them
and the quality of the actual kit they start with.

Take these Ratio 4 wheel coaches : They come with no dividing partitions, or seating.
These need to be made and built in by the modeller. The kit mouldings are quite crisp
and as I recall presented no difficulty in making up. As always you have a weak point
when it comes to adding glazing which is supplied. This is to be stuck on the inside so
the fact you won't get individual window is a potential weakness.

The other kit building difficulty is painting, not so much the main chocolate/cream, but
window surrounds and any lining required. Getting this wrong could easily spoil an otherwise
good build coach. Be prepared to take your time.

The only way to see "If it's for you" is to try. Last time I bought any of these kits they were
a little over £8 each. Perhaps more now ? but probably well worth trying.

by joshv8
Thanks Geoff.
It's positive to hear the mouldings are good.
I do like the 'uniqueness' of putting your own coaches/ wagons together so I think your right, especially at a cheaper cost they're well worth trying.

I shall have a look whats available.

by Bufferstop
I find you have to be very carefully in your choice of Ratio kits. Ratio seem to push to the limits how small the cross section of smaller parts can be, W irons, signal brackets and glazing bars being the sort of parts that don't come out of the moulds quite as they should. I complained about the poor definition of some of the parts in a GWR four wheeler brake, marked the items on the exploded diagram, got a letter back agreeing with me, apologising that it would be later in the year before they had kits from the refurbished tools, and a cheque for the price of the kit. I used the parts from a Peco wagon chassis kit with the Ratio body to finish the model and promptly forgot about it. Three or four months later a kit arrived in the post FOC, a new coach kit with much improved parts. I wonder how many people bought kits but didn't complain about them.

by Lysander
I have to say, I never complained! Maybe I should have....

My advice to anyone contemplating building a rake of Ratio 4-wheel coaches [and, indeed, their Toad brake van] is to buy the oldest productions that they can. By that I mean scour eBay for unbuilt kits in the older Sturminster Newton boxes, the pre-Buckfastliegh ones, easily recognisable as they do not have transparent window fronts.

Why? Simply because they were produced quite a long time ago when the moulds were still quite crisp and flashing is far less evident. The latest coaches suffer very badly from this and very great care has to be taken in removing the flash from the mouldings and then the mouldings from the sprues. Roofs can be particularly problematic as can the fragile and thin tie bars.

The newer kits can still be made, with care, but the older ones are a real doddle and require relatively little cleaning up. They are capable of producing a genuinely prototypical coach and I'm sure Geoff will tolerate just this once [!] my liberty in posting a recently completed older kit. There was very little flash anywhere and nothing broke during construction. It's as-supplied except for the buffers, wheels and interior.

These are really very easy to construct but do not, under any circumstances, use the horrible plastic wheels!

by joshv8
Bufferstop they're the type of stories that give you faith in the people behind the products. Its great to hear Ratio went to such great length for customer satisfaction. Quite often as becomes a quality control problem however the person managing the company and wants to deliver a good quality product, Isnt the one on the line making the part and hence as Tony has said, some of the later kits are lacking. Of course this could be caused by bean counters on the management end also. All the same, Im glad you had a positive experience.

Tony that coach came up brilliantly. I think you hit the nail on the head in regards to not using the plastic wheels. I remember the consensus years ago of guys steering away from metal wheels on stock for fear of them arching out on points etc, but now theyre using the plastic insulated type they work amazing. I see the majority of mainstream manufactured coaches using metal wheels now. I was surprised buying hornbys thomas express coaches for my son how well they were actually made for a basic coach, using metal wheels. They run pretty much perfectly.

by Bufferstop
I think the cost of providing metal wheels has probably fallen off the bottom of the scale since the RTR manufacturers adopted them. Including the wheels on the sprue for a kit was never going to be a realistic solution. Going right back to the time when Airfix was Airfix and Kitmaster was Rosebud getting the plastic wheels to turn was nigh on impossible. The motorised van for animating the locos never caught on because when built as intended the loco just skidded along with the wheels stuck.

by Dad-1
The jobs never finished !!

As with most club layouts it's either a small, usually very small group, of designers and builders
that do all the work. I'm now facing the problem of loosing part of the duo responsible for all
but a few items on this layout. Buddy Derek moved this week to Hampshire.

Does this mean it's all up to me now ? Probably ?

Anyways I was looking through the internet to find a model of a yard conveyor and found on
the NRM shop a Knightwing metal kit. Still not fully painted, but here showing it's planned
use in loading swedes/turnips. I'm told by someone that this was a product sometimes shipped
out of west bay and they used a portable conveyor ! From the cart (this picture previously used on my workbench thread) No doubt there will be regular small developments on West Bay ....... IF I do them ?

I love the horses.

Maybe you have a field for them to work in?

by Lysander
When and where are you exhibiting next Geoff?

Exhibiting ? I'm getting confused as to what's going where and when !!
With Derek having moved I'm feeling rather on my own. One consolation
is that in July Jamie who helped at the beginning of Castell Mawr is planning
to come & see me (He now lives in Cambridgeshire) Fingers crossed nothing
goes wrong.

West Bay will be at the clubs 'Open Day' to be held in the Salthouse at
West Bay on 5th May ..... Thomas was going, but space is tight and we
will probably drop that, but Can't remember about HS-2.
I've already booked with the council and have to collect the keys on the
Friday before.

I think June is clear, but July & August, my heads spinning.

6-7 July, HS-2 at the Chickerel Steam Fair. This is my layout and being loaned out - nervous !!
27 July, Castell Mawr, & Thomas, & West Bay ????? Don't quite know how this will be done ?
3 August, Thomas at the West Bay Fete Day, in st Johns Church.
17 August, Thomas at Drimpton Fete
24 August, Thomas at Halstock Fete
28-29 September, West Bay at WAMRC Blandford

Weymouth at the beginning of November, I can't recall at the moment if it's HS-2, or West Bay
Seaton Library in December, Thomas
West Camel on 29th December. Thomas

AND I wonder why I feel harassed ?

by Lysander
SRMG belongs to WAMRC, so it’ll probably be Blandford.

by Dad-1
Hi Lysander, may see you there then.
I'm doing the first day only.

Well I really fancied seeing the diminutive Heljan 1361 Shunting on West Bay.
It is NOT going to happen because I can't get it to run on the SMP/Marcway points combination used for our
track.
The locomotive has suffered pick-up problems, greasy backs of wheels that took 3 deep cleans to remove.
It has very tight axles with zero vertical movement. I gave it an almost make, or break run on St Oval in
my garage, about 4 hours non-stop each way pulling 18 wagons. It did free it up slightly, but it still wouldn't
run reliably on West Bay.
Knowing that it runs reliably on my Thomas layout and the garage layout, the main problem must be the track
work. It was a committee, whole club in fact, decision to use SMP/Marcway track and my buddy Derek who made
the base boards wanted it laid on cork, which he did. Me, I wanted Peco code 75 and No cork.
A thorough examination of the points has shewn that all the 'V' ends are low compared to the switch & wing rails.
The 1361 actually rocks sideways sort of diagonally indicating that because of the poor track condition only 1 wheel
each side is likely to be in contact with the track. This being the inherent difficulty means that short of stripping all
track and probably replacing with something more robust it is not going to give the show reliability I'm demanding.

I am not prepared to rip away the track, ballast, cork and re-build. As Derek has moved away and nobody else would
take on the task of sorting it out it is obvious this small locomotive has no future. We do get successful running from
our Bachmann 57XX, 45XX and a Hornby M7.

We do have other concerns regarding the points. One has already been repaired when the switch rails broke away from
their tie bar. Another has the switch rail dragging on sleepers and will not close up tight to the stock rail. This causes
reversing trains to regularly de-rail. I will have to de-solder, allow to stress relieve itself, re-join and then file the rail
head down to give smooth transition over the join. I may also have to sand the draggy sleeper as well. I will add that
none of point sleepers have been painted, they're still in the black as supplied.

I know that if I don't sort out this layout will sit in the cellar unused, to my knowledge there is no one else who would
be prepared, or even have the skills to do it.

Not a very happy bunny.