Post pictures and information about your own personal model railway layout that is under construction. Keep members up-to-date with what you are doing and discuss problems that you are having.
Post Reply
76 posts

Nice little running video. All that weathering pays off when assembled into a train!
Top

its been a while since I updated this thread, took a little break from the layout to practice various skills to build the layout

but now I'm back to work on everything, relaid a lot of the track to improve running, rebuilt the fiddle yard, decided I wasn't happy with the terminus section so I've redesigned that, and it will allow me to use some of the points I built, rewired the entire layout so that the blocks work better and also started using rocrail and now the automation is working perfectly! having 5 trains loop round without worrying about collisions is quite enjoyable, anywhere here's a bunch of pictures and videos 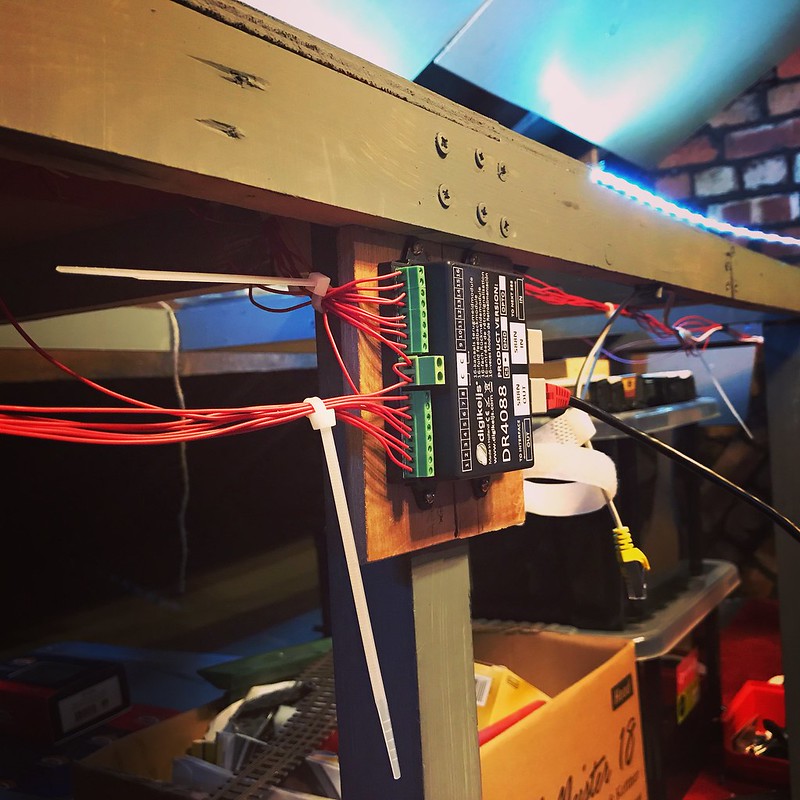 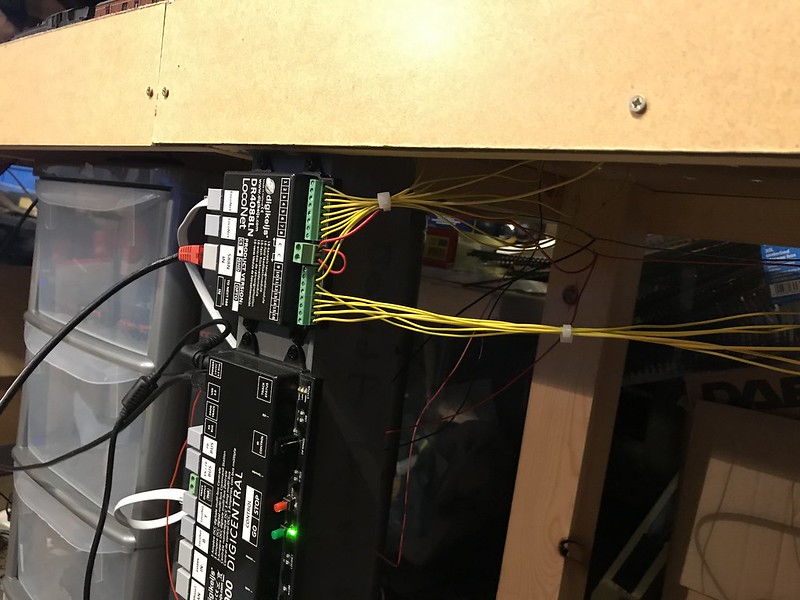 Rebuilt fiddle yard, 4 "through" lanes and 1 reversing lane with 3 sidings, this bit is so I can run shuttles in and out of the terminus without taking up a load of space in the fiddle yard, already had the points so I thought why not put them to use 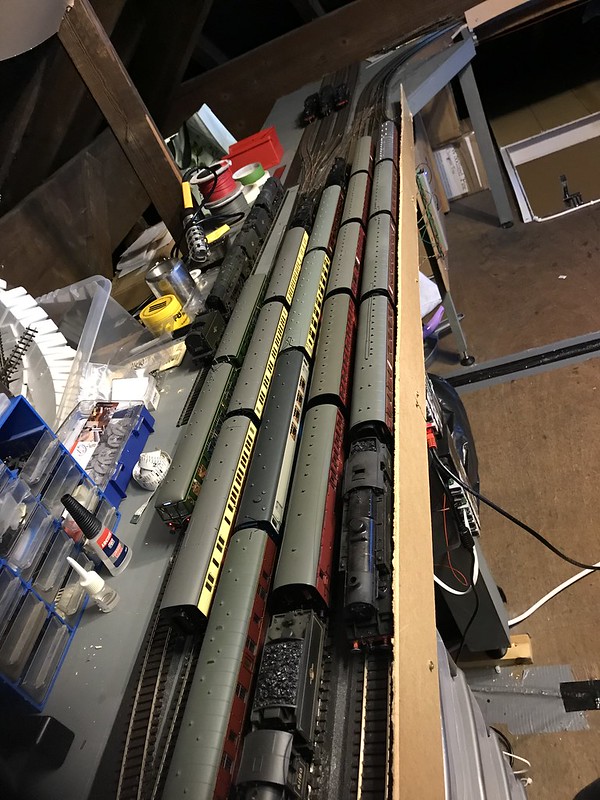 Dismantled this section again, but it's worth it to get things right! 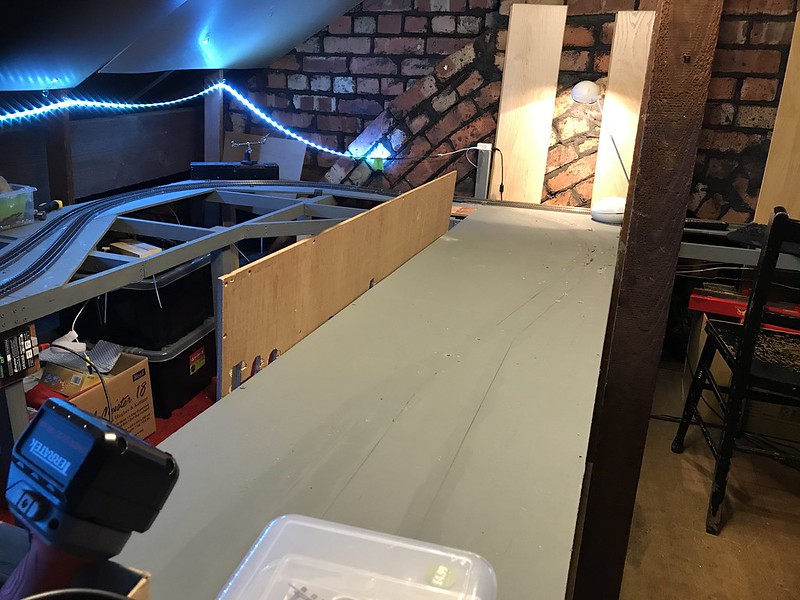 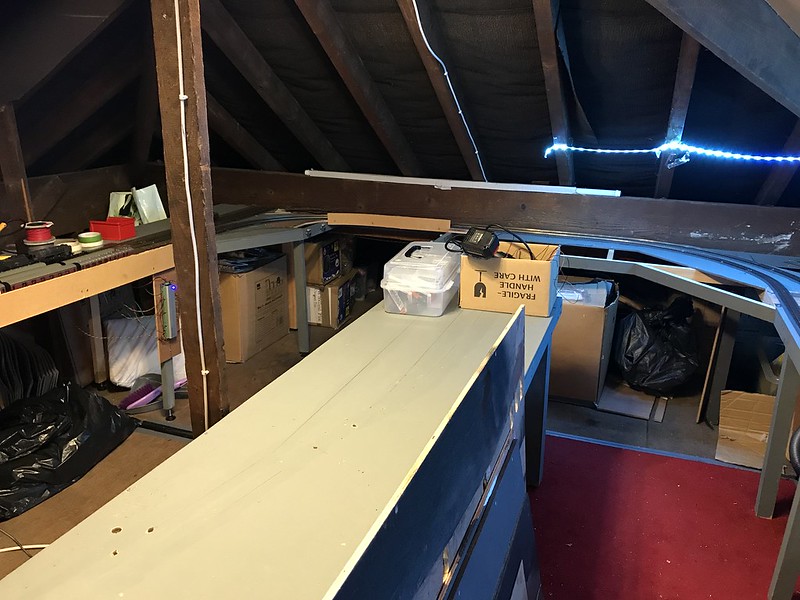 Wanted to get a short station in this section, but there wasn't really enough room for platforms either side, so I re positioned the track to allow for an island platform, also extended the track slighly and increased the radii of the curves to allow for better running 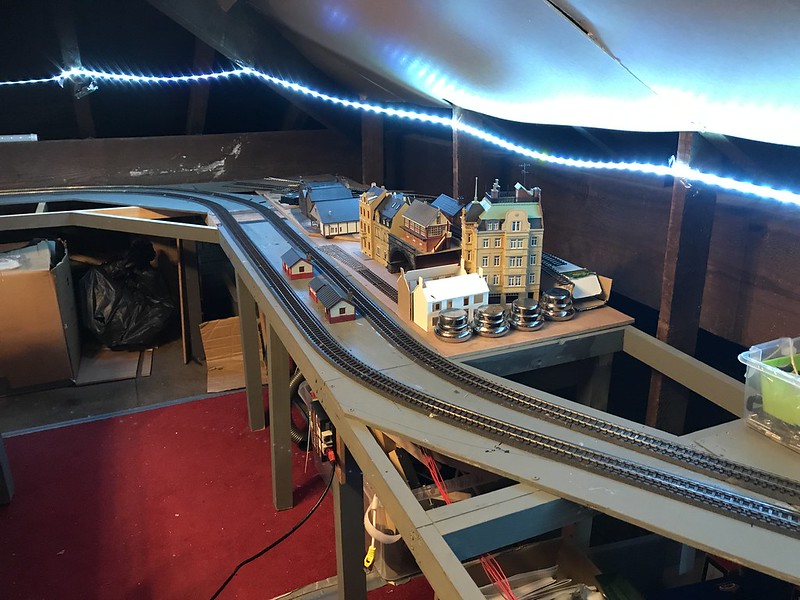 I'd originally been running the trial version of "train controller gold" while I tried to decide if it was worth parting with all that cash for, decided against it today after giving rocrail a go and discovering it does almost the exact same thing, requires a bit more messing about, but I've actually found it easier to get the trains to operate the way I want than I ever could on train controller 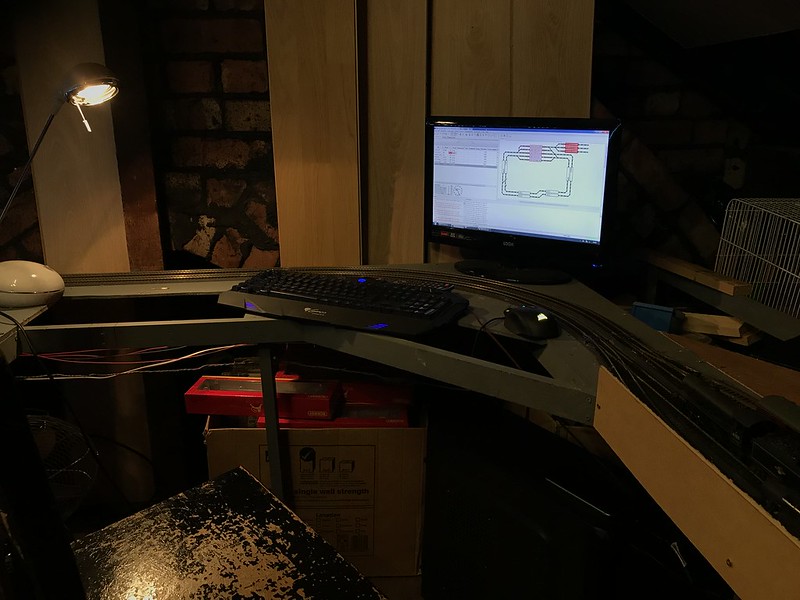 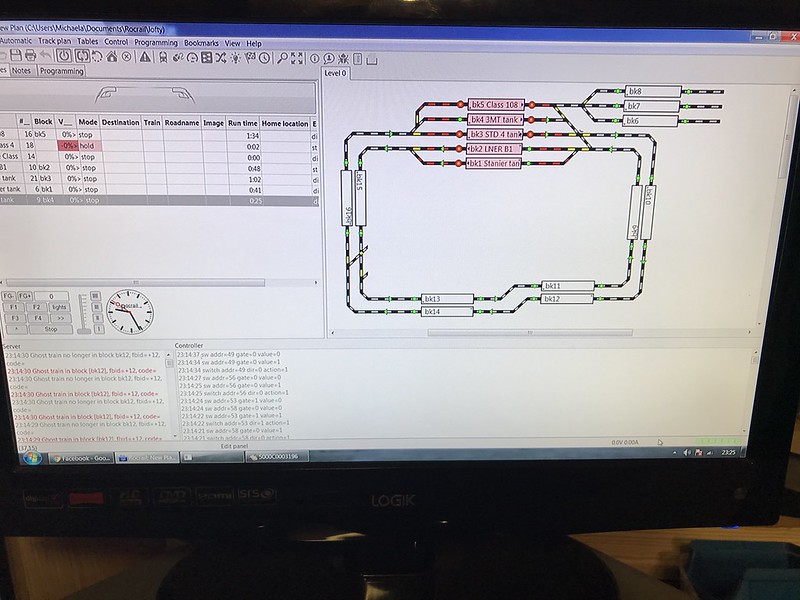 and here's another timelapse video showing the running in the fiddle yard https://youtu.be/xnV1VqPfbWs

and so ends this update, any questions?
Layout: https://www.newrailwaymodellers.co.uk/Forums/viewtopic.php?f=22&t=53269
Top

Hi Michaela, it's interesting you have swapped out Gold! What is the loconet setup, one card for points and one for block detection? Do you have resistors on the guard van/coach?

TimberSurf wrote:Hi Michaela, it's interesting you have swapped out Gold! What is the loconet setup, one card for points and one for block detection? Do you have resistors on the guard van/coach?

Well the deciding factor was mostly gold is ~ £500 and I’m not paying that, where as rocrail is free, and does the job, I’m not sure here all the point decoders are on the DCC bus, and the block detection units are on the LocoNet one

And that is on my to do list, was going to go with adding lights (red tail lamp for the guards van) rather than resistors though, more interesting
Layout: https://www.newrailwaymodellers.co.uk/Forums/viewtopic.php?f=22&t=53269
Top

Looking good. Interesting brickwork you have in your loft.
Top 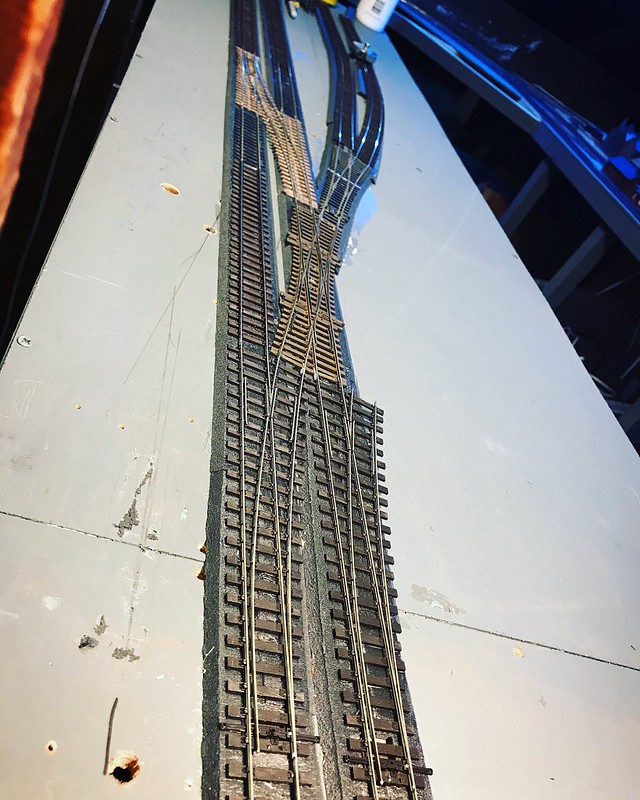 I know of a few more colourful words I'd us to describe it.

I know of a few more colourful words I'd us to describe it.

yo idea gang, now that I've got the lower section running the way I want its time to turn my attention to the upper/main line section, and I'm sorta stuck, I want to keep things simple, I want large radius curves and I want to run long trains, which seems to leave me with this 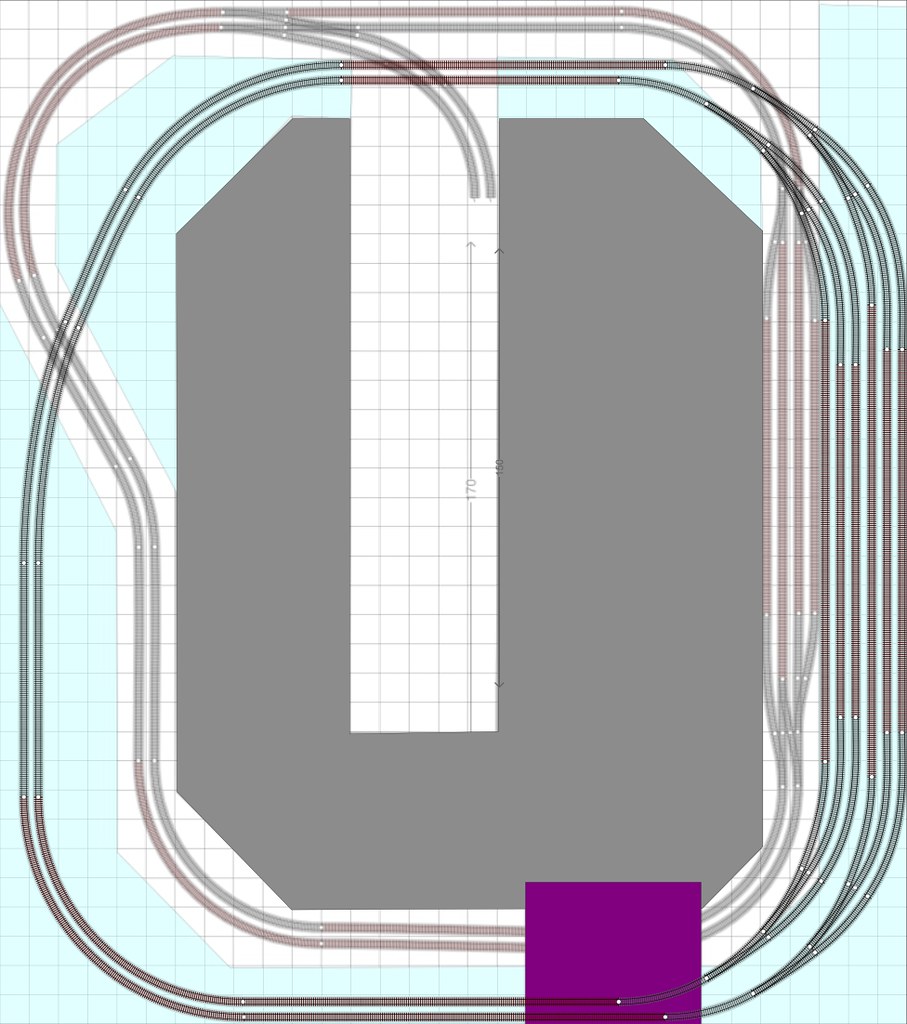 just a big loop with no scenic turnouts at all, I've tried fitting in various elaborate track work, but nothing seems to fit in the space to make sense for it to be there

now I am okay with it just being a large plain section of track, I won't be shunting anything about, I'm just concerned that I'll build it all and then thing, hmm wish this had more points in it

what would you do in this space

(ps ignore the lower track plan, I know ive changed it a lot since that plan, but it's just there to give me an idea of where it is
Layout: https://www.newrailwaymodellers.co.uk/Forums/viewtopic.php?f=22&t=53269
Top

Mega space and Mega electronics.
Some project and a half there, should keep you busy for years more.

An interesting layout. A plan that has the ability for trains to have a good run. I like it.

I not sure about it being that big, as soon as I put points in the space seems to evaporate and it just becomes points for the sake of points
Layout: https://www.newrailwaymodellers.co.uk/Forums/viewtopic.php?f=22&t=53269
Top

I guess as long as there is something interesting for the top trains to be 'doing', you shouldn't necessarily need points. For example, if you had a thru station on that short section of straight on the left hand side of the picture, at least your express trains could have somewhere to pass through or optionally stop at. RocRail looks good for setting up complex schedules, so you'd get a mix of express and stopping services.
Frontington & Backwoods Railway: https://www.matthewdawkins.co.uk/catego ... way-build/
LocoSound - sound effects for DC model railways: https://mafu-d.github.io/loco-sound
Top

Michaelaface wrote:I not sure about it being that big, as soon as I put points in the space seems to evaporate and it just becomes points for the sake of points

Looks good to me, I'd love to have that much room!
Top
Post Reply
76 posts