Post pictures and information about your own personal model railway layout that is under construction. Keep members up-to-date with what you are doing and discuss problems that you are having.
Post Reply
115 posts

Hi people, new guy here. Returning to railway modelling after a long absence. Saw this layout on the forum and liked it, made some mods then made space for a 7x4 board in the shed. TBH all I want are engine sheds and sidings for modern era. All Hornby setback and Rad 3 and 2 curves running DCC class 66, 67, 68 couple of class 08's and the preserved Flying Scotsman with support carriage for now, Any made up train will be pulling a few "Seacow" ballast wagons and tankers just for interest. With steam and diesel sound this will be one "noisy" layout. The track is pinned down in places but this is still work in progress. All buildings can be moved about. Waiting for a new power transformer as I did not realise the Hornby select can't cope with running my locos with lights and sounds on, limited to one at a time. However track setup I wanted as simple as possible so no bus wires just the power connector track and that worked just fine all over the layout but just to help there's two sets of link wire track clips at each end and all points have had clips in place to make them live. Having some fun for now just running locos around and enjoying the sounds.
Cheers Peter 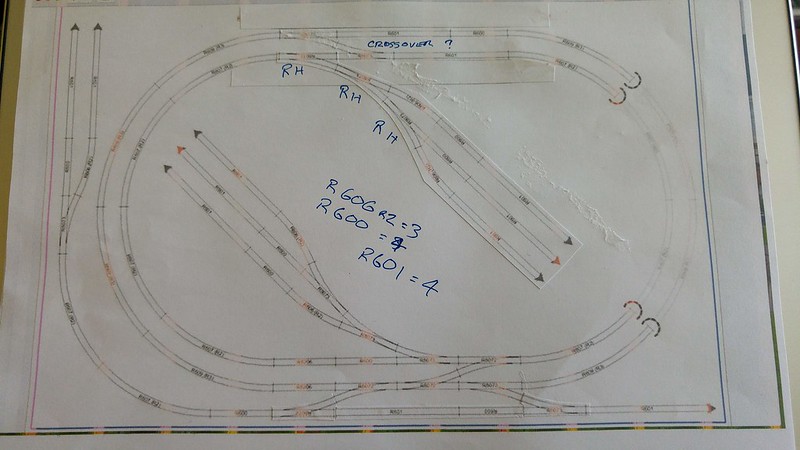 Hi and welcome to the forum ,,,,your layout is looking good at the moment,,keep the updates coming ,,,,mjb
Top

OK so hi people, been a few weeks and I have been tinkering and adding some bits and bobs. I have had power and light laid to the shed, so no more extension leads. I'm happy now with the track, made some changes from the plan yet again by moving points. Not happy with my choice of back scene now, so will look for a new one. In the corner where I made a makeshift tunnel hope to have a small dio on top at that end one day. Programming track don't look to bad at the other end. Got rid of the "link" wires as with just the one power connector every things fine, so no need for a bus setup. (love DCC) All my engines and rolling stock are very happy running over points and curves both on mainlines and sidings, which is great for that class 66 and it's Co-Co bogies. Means I can get more. Going to some model shows and am joining my local model club to get help and ideas about scenery etc..... So that's it for now
Cheers Peter 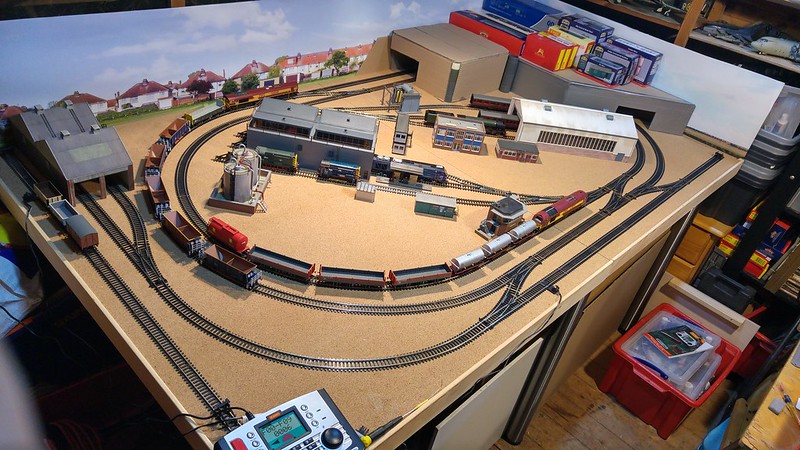 If I may I'd just like to point out something. Can you still reach the track at the back to clean it?
Thanks
End2end
"St Blazey's" - The progress and predicaments.
Welcome‎
Planning
Building
St. Blazey's Works & Depot thread
Top

Hi m8ty happy to say yes, I'm a tall bloke (6' 2") and also I'm using Gaugemaster GM37 Axle Hung Track Cleaning Pads on some wagons as the trains run round, which seeing how black they get, seem to be doing a good job. If I really need to, I can pull the whole table forward to get at the back
Cheers Peter
Top

Are the axle hung cleaning pads working well and do you use any IPA on the cleaning pads?
Thanks
End2end
"St Blazey's" - The progress and predicaments.
Welcome‎
Planning
Building
St. Blazey's Works & Depot thread
Top

Hi there, pads run dry on the track, but to clean of the dirt they pick up I use track cleaning fluid and wipe dry with kitchen roll. Before and after using Dapol track cleaning fluid. Yes they will wear out in the end but they have been on from the start. Cost £6 for pack of 3.

Just an observation about keeping contacts and wheels clean. So my Backmann class 66 started to run badly so got myself some IPA from the chemist which was called "rubbing alcohol' at 70% strength of IPA. I have my own home made setup to run the loco while I clean the wheels and they were dirty. Problem was that although all seemed clean, she still gave problems. She would crawl very well but at half speed sometimes would 'surge' forward. Anyway long and short of it, I had ordered some IPA on line and that comes in at 99.9% strength. Result she runs beautifully. Also gave the track ago to, which as it's a roundy roundy layout,didn't take long. Have seen other ideas like lighter fuel, track magic etc and the stuff from the chemist even if it cleaned, must have left a coating behind, but my new full strength stuff cleans and dries so well now. Happy days. Used in a well vented place BTY (the shed with both doors wide open)

Have you tried the 99.9% on the actual axle hung pads yet?
Reason I ask is because I use IPA dipped cotton buds to clean the track by hand. It does take quite a while.
Thanks
End2end
"St Blazey's" - The progress and predicaments.
Welcome‎
Planning
Building
St. Blazey's Works & Depot thread
Top

Hey there End2end
Yes was thinking that but the pads don't retain that much fluid as they are just a pad with a plastic backing and are very light touch to the track. I'm sure the IPA would get them very dirty quickly and lets face it the IPA will soon evaporate. So like you I do it by hand
Cheers
Peter
Top

Thanks for the reply triuph1050.
That's what I was thinking, are they heavy enough?
I supposed you could add weight to the backs of them but for now I'll stick to hand cleaning.
Thanks
End2end
"St Blazey's" - The progress and predicaments.
Welcome‎
Planning
Building
St. Blazey's Works & Depot thread
Top

Delightful layout. The structure in the right corner is a clever view break.
Nessie rocks!
Top

A few pics disappeared. What's going on ?
Back on the track !
Chris
Top

Ahh the joy of sync,..... delete pictures of the phone,...delete's the pictures from everywhere else. So here's new ones and as you can see, to busy playing trains than getting on with the ground work. Got a new back scene done which I'm a lot happier with. View break in the corner is now ripe for some buildings and such like, next in the front left side it needs a road bridge to span the three tracks to bring interest to that part of the layout. Note only one class 68 for now for the nuclear waste train 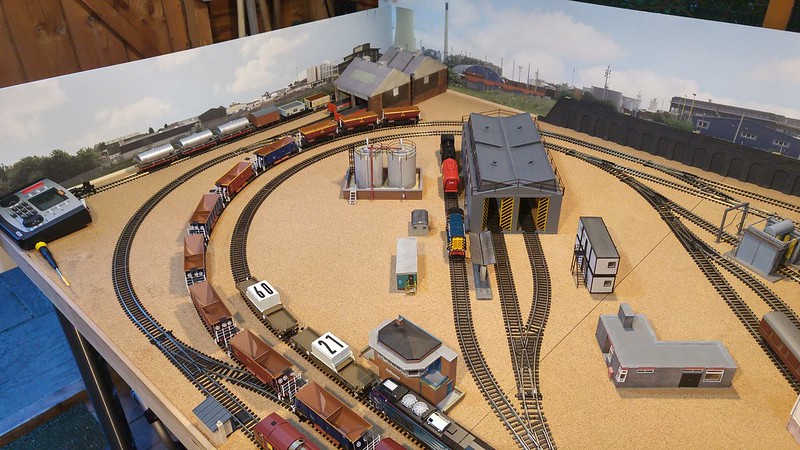 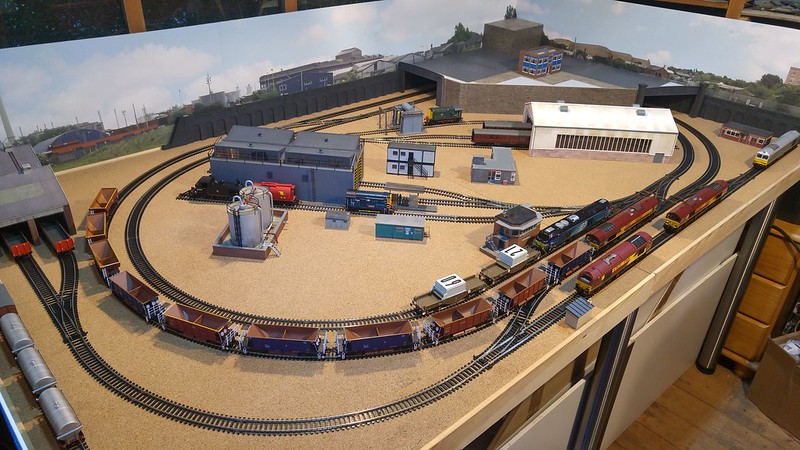 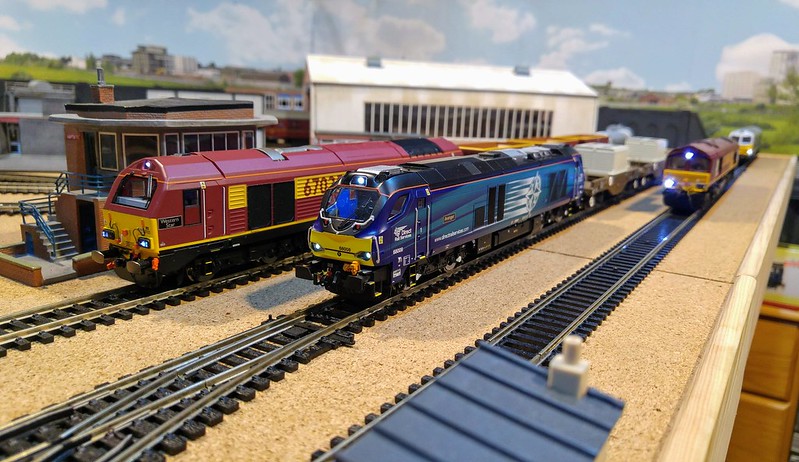 I like the idea of the isolated siding at the back. It makes the scene seem bigger then it is.
Top
Post Reply
115 posts