Post pictures and information about your own personal model railway layout that is under construction. Keep members up-to-date with what you are doing and discuss problems that you are having.
Post Reply
423 posts

Hello all
I've have managed to get four of the vintage Trix Yard lights in place and working in Weldon's Goods Yard.

Dublo wrote:Hello all
I've have managed to get four of the vintage Trix Yard lights in place and working in Weldon's Goods Yard

Very nice. I bought lights for my layout (albeit modern rather than vintage ones) some time ago. I really need to get around to fitting them.....
Top

Hello
A few of the latest Black and White's of Little Weldon.

I especially like the shot of the turntable with all the loading towers. It all gives it a sense of a very busy railway.
Thanks
End2end
"St Blazey's" - The progress and predicaments.
Welcome‎
Planning
Building
St. Blazey's Works & Depot thread
Top

Hello all
Hopefully this works
https://flic.kr/p/2meFrCV
Please let me know because it could be the first moving pictures of Little Weldon.
Top

In Flickr you can share the video with a thumbnail
1. Click the "share" button
2. Click on the "BBCode" tab
3. Select the size from the drop-list e.g. Medium
3. Copy the code
4. Paste it into here and edit to suit; e.g. the link currently shows your real name 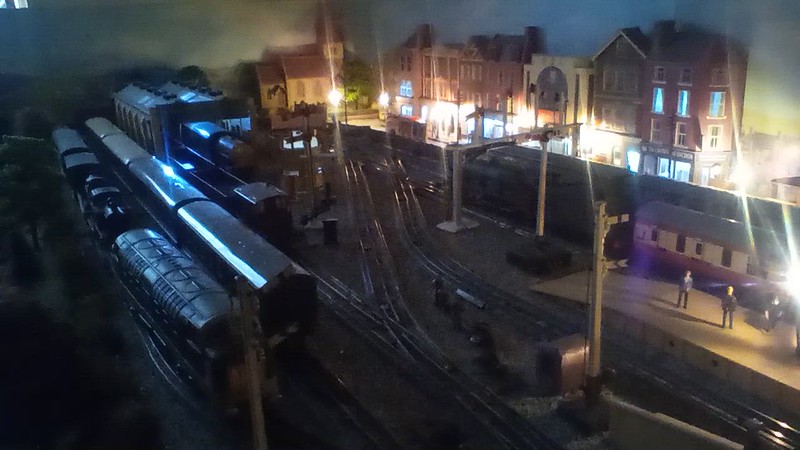 That was really cool getting to watch a night running session. It would be nice to see some more!

Hi Dublo,
How's Little Weldon travelling? This layouts been in my thoughts quite a bit lately, you captured a great compromise of suburban area and countryside and fit in a lot of operational areas. As we move foward here to ramping up lemmington harbour Little Weldon is inspiring some further ideas.

Hello all
Many thanks for your kind words regarding Little Weldon Josh. One of original aims was to produce both a rural and and urban setting for the railway if a larger space ever became available I would certainly add more countryside. Another of my early thoughts was to make a HD layout as railway like as I could based around the collection. It certainly evolved as the build started. I think the decision to open up the layout to include contemporary pieces has helped to make the whole picture more cohesive.

I have not carried out much modelling over the summer but I have managed to squeeze in a few running sessions.

I'm pleased that the Weldons are helping to inspire you, and I am looking forward to next update from Lemmington.

There is some big news coming over the next few weeks regarding Little Weldon.

Here are a few pics from over the summer, I apologise if you have seen these before.

Fantastic photos!
It's interesting thinking of making a railway as realistic as possible. My goal with Lemmington had been to make something aesthetically as close to a model railway and as far from a train set as possible... without trying to produce something from a magazine cover.
I wanted to take this to another level of realism with Lemmington docks and have struggled with what I wanted to achieve.
And that's where Ive really had a change of heart. A train set is more what I want it to be. Not be concerned with points being too short and curves too tight and things being non prototypical. Something that can just be fun.

And that's where Little Weldon really hits the nail on the head. Hornby Dublo was really highly detailed for its time but its still designed to give fun and enjoyment. No modern day influences of prototypical trackwork and rail heights. Just a highly detailed train set that's fun to operate.
And Little Weldon has all that train set style fun encased in a realistic railway. Country side, suburban areas, stations, sidings, loco depot, turntable, bridges, signals, lighting. It really is fantastic, its most everything you want to achieve. And I want to capture that same dynamic.
I think Glencairn gets it to with Sovereign street, the layout changes and grows and he just has fun with it.

Hello all
I've been reflecting on what Josh has been saying.
Regarding making the Weldon's as railway like as possible may have its roots in Meccano Limited repeatingly encouraging boys to do so through the pages of the Meccano Magazine. Hornby Dublo models were designed to be as accurate as possible within the limitations of the production techniques used. If you read the reviews in the model press with the release of items such as the Castle and the Super Detail stock. They were all very complimentary saying that they were the best commercial products they had seen and recommending them for "serious" modellers.
Marketing wise Hornby Dublo was aimed at boys but obviously Dads had to be encouraged to buy the products.
As the system was primarily designed for boys to use the electrics were simple and robust. Although I admire all that todays control systems can achieve the DC as used here is at totally the right level. Being designed with the toy market in mind the whole system runs well. The track, wheels and pick ups don't need to be as spotlessly clean as todays models want to run well.
Putting the range into a scenic setting has also totally altered the feel of the product, although still being a toy system it has help to transform it into a model railway. To me it no longer feels like a collection of pieces but a unified whole.
Having said all of this at the end of the day its a hobby and as such should be fun. Most of the time I get a great deal of satisfaction watching the trains run by. In this crazy world we live in it helps me unwind.
Going back to Josh, I must say that I think Lemmington is a great layout, which looking back at your thread gave both you and William a lot of fun to make and hopefully operate.

The track, wheels and pick ups don't need to be as spotlessly clean as todays models want to run well.

Something I discovered 60yrs ago moving from Dublo 3rail to Triang TT with 2 rail galvanised track, it was hard work to get anything to work as well as the heavyweight 3rail locos did.
Growing old, can't avoid it. Growing up, forget it!
My Layout, My Workbench Blog and My Opinions
Top

Hello all
I haven't been doing any modelling lately, a little bit of layout running. I did manage to find a rather nice Wardie Master Models Tobacconist Kiosk though.
Unfortunately Little Weldons big news event didnt occur.
I have been editing a few photos from the last year.

That picture inside the ruins is fantastic!

I like the kiosk, do you find many such items come up for sale these days or are they quite rare?

Users browsing this forum: No registered users and 24 guests