Post pictures and information about your own personal model railway layout that is under construction. Keep members up-to-date with what you are doing and discuss problems that you are having.
Post Reply
57 posts

It was only a suggestion!
But you now have to glue some grass on the blobs as disguise!
Try some very dry, brittle leaves, crumbed into almost a powder as leaf litter at the base.

Longvallon wrote:Well done. It gives me a lot of ideas.

Thank you.
I have seen many layouts on the internet giving me plenty of ideas, it's nice to know I'm giving someone else some ideas.

BuffyMcBuffer wrote:At first I wasn’t sure on this but now you’ve got some little details going on it’s actually turning out to be quite nice all together

Thank you for your comments.
My harshest critic (SWMBO) likes the layout, and didn't even bat an eyelid when I suggested hanging it up on the wall

Here is the first of two posts. 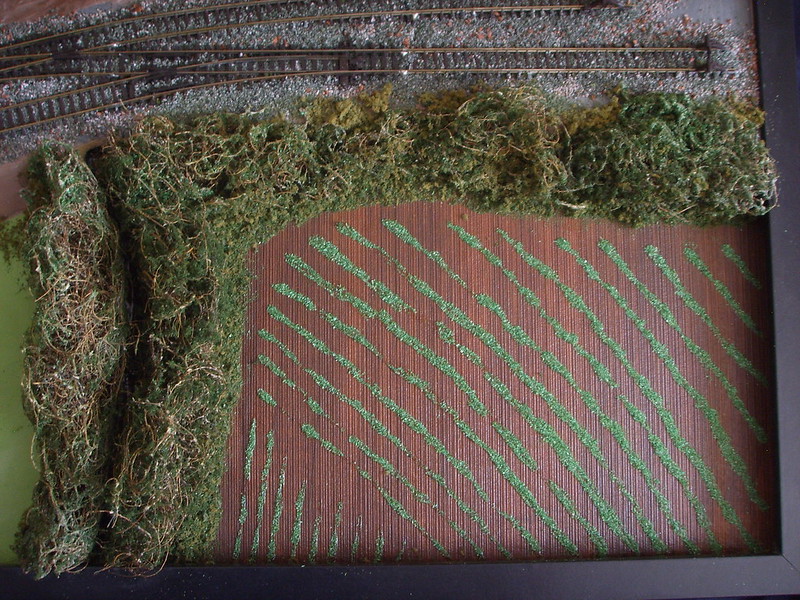 This is the ploughed field, seeded and growing

I used the end of a cocktail stick, but it didn't work out as well as I thought it would, as I couldn't get the glue down onto the surface.
The lines have also ended up being too thick. I should have used a thin paint brush.

I have also stuck my bushes down

Along the edge of the railway embankment I stuck down some smaller bushes. This time I put down plenty of glue and stuck the bushes straight down.
I had to place some small weights on top of the bushes to make sure they got stuck down, which means that they did get a little squashed.
Luckily this unfortunate accident has worked out in my favour.


End of part one.
Main Layout: Planning | The Build

Here is some photos of a loco and some wagons on the layout. Enjoy 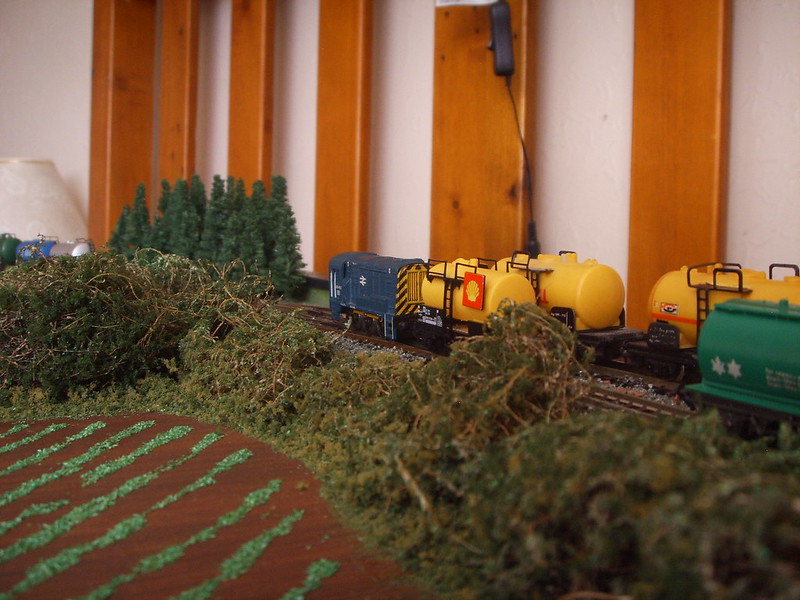 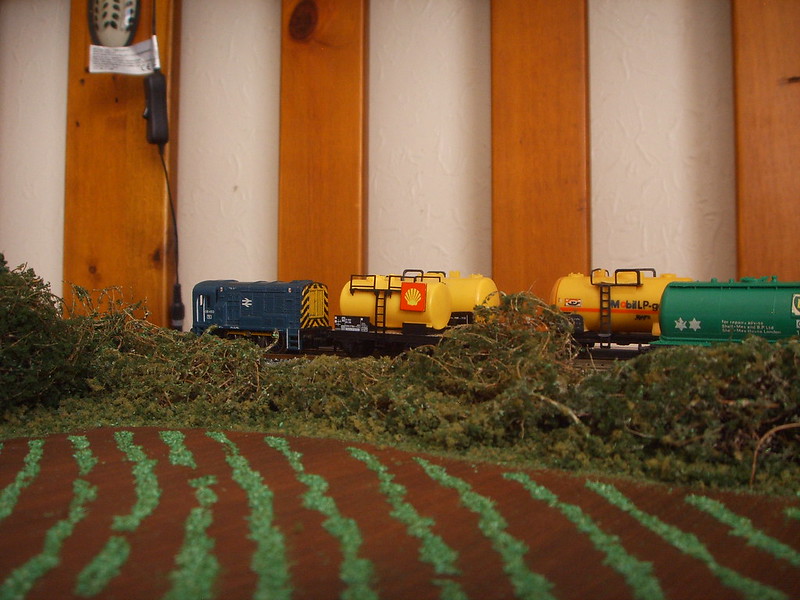 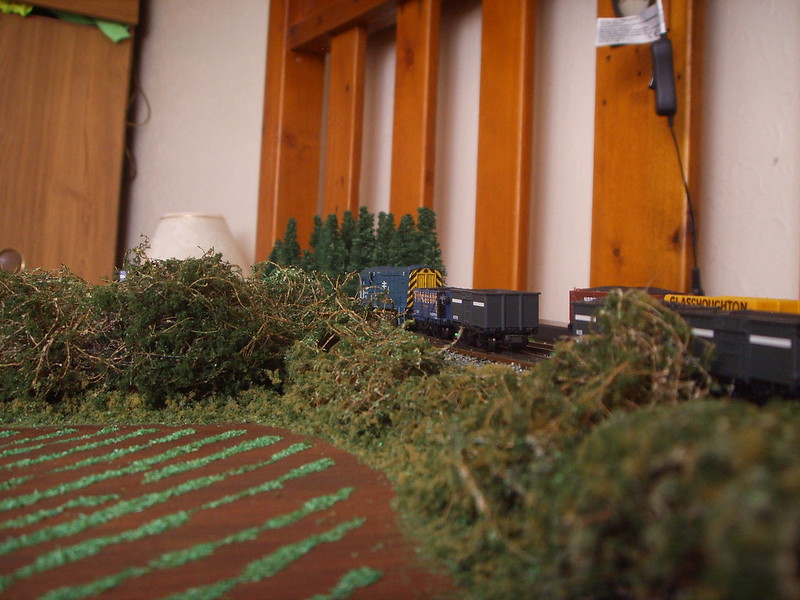 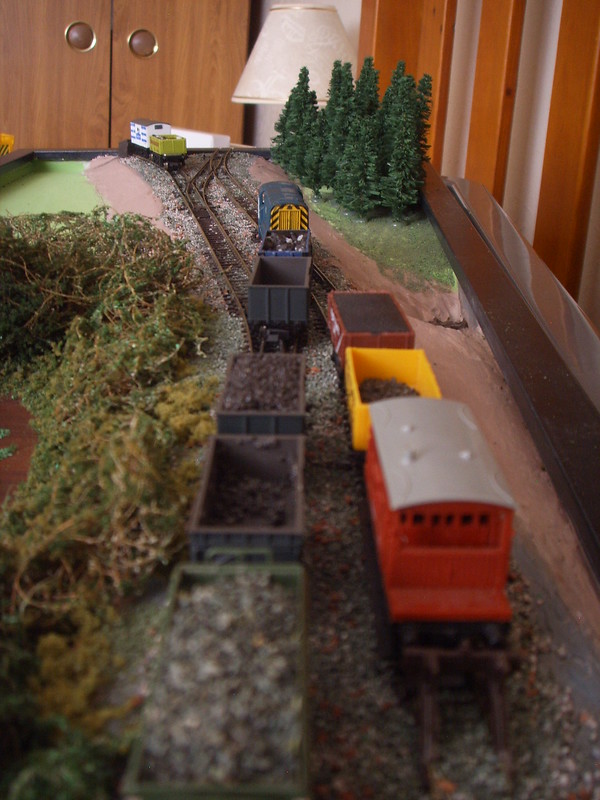 Ok, maybe I have cheated a little by only showing the more completed parts.
I'll take a photo of the whole layout once I've found a large enough area to stand it up and not have all of our c**p showing in the background.

Very nice. I like the rows of veg in the garden.

Mountain wrote:Very nice. I like the rows of veg in the garden.

Thanks, they should be ready to pick in a few months time

Mountain wrote:Very nice. I like the rows of veg in the garden.

Thanks, they should be ready to pick in a few months time

You have to water them with special 00 scale powdered water. You local model shop may sell it, but there again may not.

As promised almost a week ago, here is what the layout would look like hung on the wall. 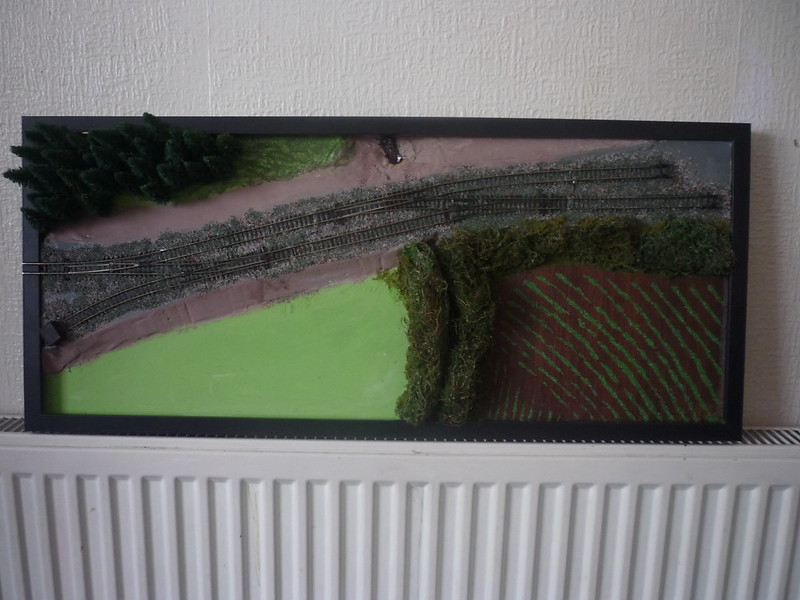 Ok, it is sitting on top of the radiator.
On the back I still have the original hook to hang it on the wall, but I don't think it would be strong enough. I deliberately placed two pieces of wood within the frame, so I have something to attach some stronger hooks to.


On Saturday I won an auction for a new loco (A Grafar GWR 8108). I wasn't looking for anything, I just happened to be on eBay with a minute or two remaining.
It was under £30 (inc. postage). And it was DCC. Bargain!

I was going to post a video of the loco running, but the track needs cleaning, so here is a photo instead 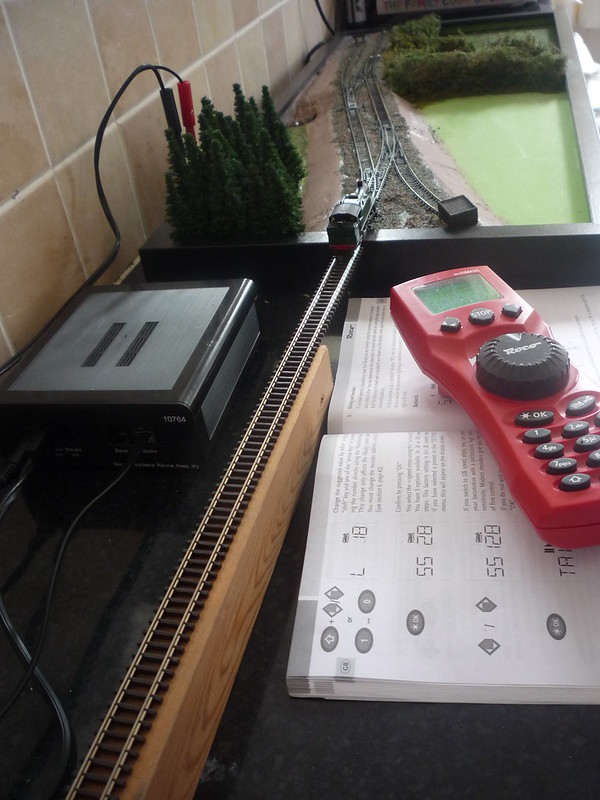 This is my first DCC loco, and the first time I have properly used the Rocco multiMaus.

Mountain wrote:You have to water them with special 00 scale powdered water.

I think I'll have to report you for swearing

Ooh. A Roco Loco Mouse. Those are compatible with Lenz though you may need to check the version numbers etc just in case. I have Lenz myself for use with my 00 gauge collection.
Haha. Swearing!

Keep going with your little layout. It is coming along nicely.
Top

Mountain wrote:Keep going with your little layout. It is coming along nicely.

Thank you Mountain, and well done to your 6th place finish

I will keep going with this one.
I will make more bushes for the bottom left of the layout, but I'm not sure if this should also be a ploughed field, or a field of sheep!

I'm going to try and find more trees for the top, but until then I think I will just use some scatter to fill the area in.

Then I'm going to have to sort out a more permanent fiddle stick, and then find somewhere to hang it

If you decide on sheep, make sure you have good fences to keep them in. Sheepnetting.
How do you find the Loco Maus?
Top
Post Reply
57 posts