Post pictures and information about your own personal model railway layout that is under construction. Keep members up-to-date with what you are doing and discuss problems that you are having.
Post Reply
512 posts

Do they also run well?

I never had one of those mechanisms in my hands (yet)

All of them run not too badly as they are nice and simple. The newer ones have lovely slow speed control even though they look identical. There is nothing really wrong with the old ones though but they do have a high top speed.
They are cheap and cheerful and have been running round on kiddies budget trainsets for years so they have proven themselvss in this way, and the advantage is that one should pick up one for a reasonable price as they made lots of them in various forms.
For these kits, one needs to make sure one has the right chassis as some models had pistons and piston rods and some didn't, and some Smallbrook Studio kits need the piston rods and some do not.
Triang used to make something similar but they had a solid metal framed chassis (Very nice so far) but they had heavy metal steamroller type wheels which were nice and weighty but rather crude. Earlier Triang also had the X03 / X04 type motors which I actually like but they are a little rough by todays standards. The good thing is that it is possible to make a hybrid chassis using a reworked Triang heavy framed metal chassis with modern Hornby wheels, motor, gears etc, as they use the exact same frame spacing even though the modern axles are a tiny bit thinner and it makes a lovely free running and sturdy chassis but... It is a lot of work to mill and cut the Triang heavy mazak weights in between the frames so one has suitable holes to bolt or screw the chassis to the Smallbrook kit, and cut the weights down to fit, and there is also a lot of work to do to make more room for the motor to fit (And one has to find a way to attach the new motor. I used a later Triang chassis (Not the X03/04 type) which is the same as the X043/04 type but had a cradle for the newer style (But now old but still nice enough) motors. The ultra modern motor sat on the cradle but needed a way to strap it in. I used small cable ties).
One also has to make oneself new pickup assemblies (I made mine out of PCB) so it is not an easy conversion, but the results are worth the effort assuming the body one has chosen has the room as the motor does sit slightly higher then they do with the modern Hornby chassis. It took me about 4 or 5 days work and most of that was milling through mazak with the minidrill and cutting through the chassis weight with a junior hacksaw!

But going back to the difference between the newest types using the same Hornby design and the older versions, despite there being no real visible changes, the pickups are much lighter on the modern ones so they are better when one has a slower speed crawl. I believe the motors run slower (And I have not opened up my new one to see) is that the motors look the same but I heard they have 5 pole armatures. I do not know if this is true or not. All I know is they have a noticeably slower top speed and smoother slow speed control. Mind you, if the wheels are clean and the pickups are adjusted well, the oder versions were not too bad with slow speed control. Maybe not quite to todays standards, but I found that they can be made to behave if one has the patience to clean and adjust them, and the older ones are dead easy to take apart and re-assemble, where as the new ones pick up assemblies need three hands to get them back together again!

The ONLY one I would avoid was in the mid 1970's Hornby made an 0-4-0 that had a continental look and was similar to these but was cheap. It had less parts to its chassis and it had square axles ad the wheels were so lightly chromed it was common for the chrome to come off giving poor running.

Hornby now also do new ultra expensive 0-4-0's to entirely new designs but I have not had my hands on these and it also is out of my concept of "Budget". Maybe one day!
Modelling On A Budget ---》 https://www.newrailwaymodellers.co.uk/Forums/viewtopic.php?f=22&t=52212
Top

Thank you, Mountain, for the explanation and the teaching.

(I wonder if after Brexit such not to pricy stuff will be still afordable in continental Europe...)

None of us know the future in that way. I don't see any real way why under any system it should prevent one buying privately from one person to the next in between countries?
Prices will go up anyway as currencies collapse so it will happen anyway regardless of trading between countries and prices will go down if their economies are doing well. The "Official" interest rates seem to have no similarity to the prices in the real world these days so \○/ ? Who knows what is happening?

But these little budget 0-4-0's should still be available even if one buys secondhand. They work. They are easy to maitain and keep on the rails. As long as one does not expect too many miriacles! Haha! It would not surprize me if (Collectively speaking as they have been made with many body styles) they were made in greater numbers then most other model locomotives around the world, but I maybe wrong. It is rare to go into a toy and train fare and not see at least one of these little locos somewhere for sale here in the UK., and that is why they are good to use as a donor loco to build on, be it a kit or a scratchbuilt loco. I am thinking though, of making my own metal chassis but using these Hornby 0-4-0 parts, and the ones with the higher top speed (Most of them as only the newer ones have a more reasonable top speed) of finding a simple way to re-gear them.
Modelling On A Budget ---》 https://www.newrailwaymodellers.co.uk/Forums/viewtopic.php?f=22&t=52212
Top

Did you considered replacing the motor for a POLOLU geared one?
It is really tiny, super powerful doe the gearing, amazing cheap (so far), works great, comes in an amazing variety of speeds and the speed range can anyway be altered by just changing place of the gears.

The ROWAN railcar I am building runs under RC with such a little motor.

I have seen other people use those motor and gearbox combinations. I have not tried them myself. They look good.
Modelling On A Budget ---》 https://www.newrailwaymodellers.co.uk/Forums/viewtopic.php?f=22&t=52212
Top

They make a model run so smooth as you always wished.

This is a Pololu mounted on a (now skirted) Rivarossi boguie H0 unit stolen from a #1340 Meyer articulated loco: 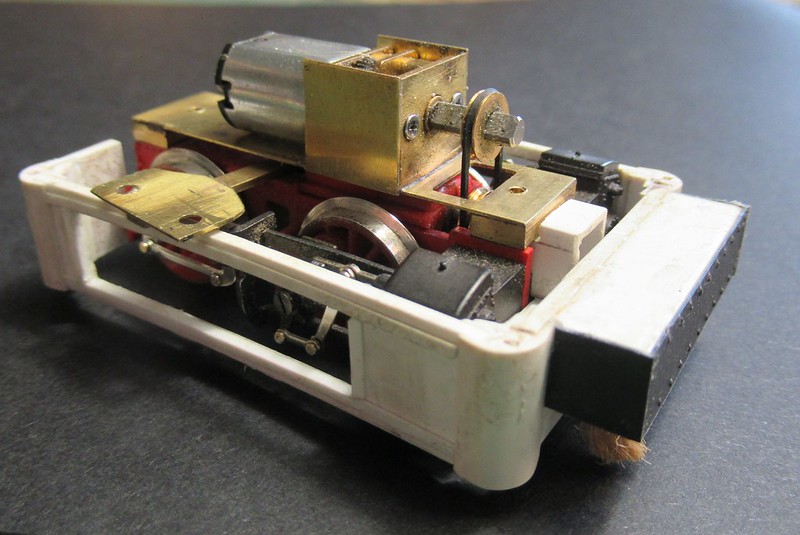 and here, at the background, you see it without the skirt 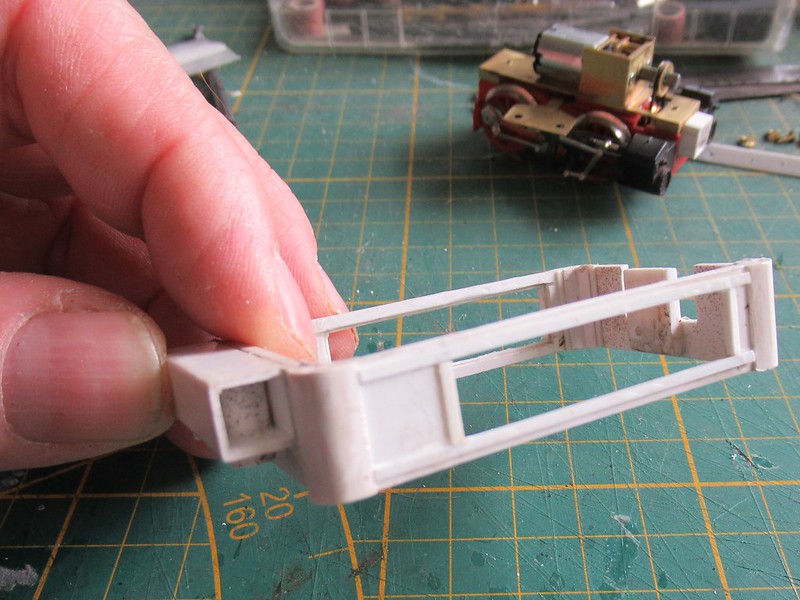 I have never had a loco with a drivebelt before. I had thought of making my own on a very simple wooden chassis for the fun of it! What about the friction?
Modelling On A Budget ---》 https://www.newrailwaymodellers.co.uk/Forums/viewtopic.php?f=22&t=52212
Top

The belt doesn't need to be too tight to work properly.

You may find excellent information from Nigel Lawton here:

I suggest you look also the other pages of the website.

The pulleys and belt in my Rowan come from his range.
He is a very good fellow and an expert. If you have questions sending him an e-mail asking will provide you very clear advice.

Anyway the remotorizing of the Rivarossi chassis was not done by myself but by John Vogelaar at my request.

I have seen his site before. I will look again to see more.

I've played about with a couple of these motors. They do solve one problem that bedevils the design of motor bogies, You aren't restricted by the need to have step-down gearing between the motor and wheels. I used a 20 tooth wheel driving a 10 tooth one on a secondary shaft, which then drove a 1:2 reduction crown and pinion for each axle, the real reduction being done in the motor. They do need to be securely clamped in place, they develop enough torque to twist themselves free when stalled if their fixings are too weak.
Growing old, can't avoid it. Growing up, forget it!
My Layout, My Workbench Blog and My Opinions
Top

I have a few plans which I have been thinking about for a while, though this evening, when I looked at my collection of those things that I had offered for sale at bargain prices in the past but no one wanted them sort of thing, and I think this old Jouef Playcraft bogie tanker offers potential.

I have learnt to pay real attention before spending my very limited resources buying something but twice as much before I discard something: many of the things modelers gather tend to look useless after a while but is just because until their day arrives they stay dormant and keep secret their final importance.

Here it is dissasembled into smaller pieces.

Though this looks a mess as yet, and I am making it up as I go along, I have cut the tanker part so I can make two narrow gauge tankers. I have rescued some old modelling clay to do this by adding water into the clay packet.
I was going to be accurate and turn the two tank parts in the lathe but the plastic is thin and brittle, so though I could mount it in the lathe using a plastic chuck, I am not sure even by using a plastic chuck which is gentler, if I may destroy the parts, so I thought it better to just use the sander instead.
Now the modelling clay looks messy at the moment. I will tidy it up as I go along. Excuse the light but I have them in front of a fan heater so the clay will dry a little quicker. The tanks are quite heavy now!
I do not know if the bottom part of the clay will remain intact so it will sit on a clay supporting plinth on one side and the origional plastic protruding plinth on the other, but if it does not work, I will file both sides off and make a wooden support to hold it after I make the waggon base.
Well. It is interesting!