Welcome to my little slice of America!
I’ve modelled the Chicago & North-Western railroad way on and off since the early 1990’s. When I say “modelled”, I guess I should really say collected stuff for this line! Although when one builds rolling stock, does detailing, renumbering, weathering as one collects - that is modelling, of course!
Anyway, I never got around to building a layout to run my models on, just ran them on either my own test tracks or on other peoples layouts. Not terribly satisfying but there we were. I even went down various other paths, sometimes for years at a time but no matter what happened with other things, I always stuck with the C&NW.
A few weeks ago, I spotted on a UK forum that a fellow US outline modeller, Dan Spalding, was selling his layout called “Galatia, KS” and I liked this layout anyway so I jumped at the chance to get hold of a ready made US style layout.
Negotiations took place and I arranged to travel down to the Princes Risborough (Buckinghamshire) show where Dan was exhibiting Galatia for the last time. I had a very enjoyable session learning how to operate the layout ‘properly’ (with car cards and ‘spots’) then Dan and his colleague kindly showed me how to disassemble the layout, we loaded it into my car and away we went.
I then had to spend quite some time reorganising my ‘big shed’ as my half (it’s shared with my better half!) had gotten untidy with too many half finished projects on the go, woodworking jobs, household items needing repair and so forth. At this time, I was also suffering a mysterious fatigue that would cause me very low energy levels so this was slow going. In fact, I had only just managed to loosely erect the baseboards and connect them together when it was time for a holiday.
Two weeks later, nicely refreshed (thanks Greece!) and once I had caught up with work again, I could start getting “New Ulm” ready for operations.
So, why New Ulm and where is it?
Well, one of my ‘distractions’ had been modelling and researching the railways of Bavaria and one of my discoveries was that they once served the town of “Neu Ulm” - this sparked something in my memory and I was able to find out that a number of German settlers from Neu Ulm had settled in Minnesota and gave their town the Americanised version of this name. What’s more, they had brought some of their skills with them and they had set up a brewery here too. At one point I had the idea of doing Neu Ulm (Germany) and New Ulm (America) as similar layouts, that fell by the wayside but the name has stuck.
This part of Minnesota has rolling hills and the town of New Ulm is in a hollow so locomotives have to work quite hard to get out of town. This must have been a heck of a sight and sound in the period from the late 1960’s through to the early 1980’s as the line New Ulm is situated on was called “The Alco Line” (from Winona, MN to Rapid City, SD) due to it being a line that the C&NW concentrated most of their Alco locomotives on.
Alco’s are well known in US outline circles as being very noisy and claggy machines as well as being amazingly rugged and long lasting! Unfortunately Alco shut down in 1969 so to find there locos still running on a ‘class 1’ railroad in the early eighties was quite something, hence the line drew quite a following.
Unfortunately for me, my collection of Alco’s is quite limited so for the moment, I am forced to operate with EMD’s which pushes the time frame forward to the mid 1980’s onwards - sadly, only until 1995 as the C&NW ceased to be after that time. The line itself is still running however under the ownership of the “Dakota, Minnesota & Eastern” railroad (DM&E). I believe they even still run some ex C&NW locos, now in the smart blue and yellow livery.
However, back to the layout.
It is all DCC as I am an electrical numpty and I don’t ‘do’ wiring, my vision goes haywire when I see more than one pair of wires! Under this layout is a little bit more than one pair of wires so I’ve had to take my time and trace things out. Fortunately Dan laid everything out very logically and marked up what goes where. I’ve had to do some minor swapping and changing as my digital system is NCE and was not quite compatible with Dan’s Digitrax system.
Once I’d done that, the layout was working again and I can have plenty of fun, switching cars around. I hope you’ll enjoy my progress as I work through my stock, continuing detailing and weathering and fine tuning. 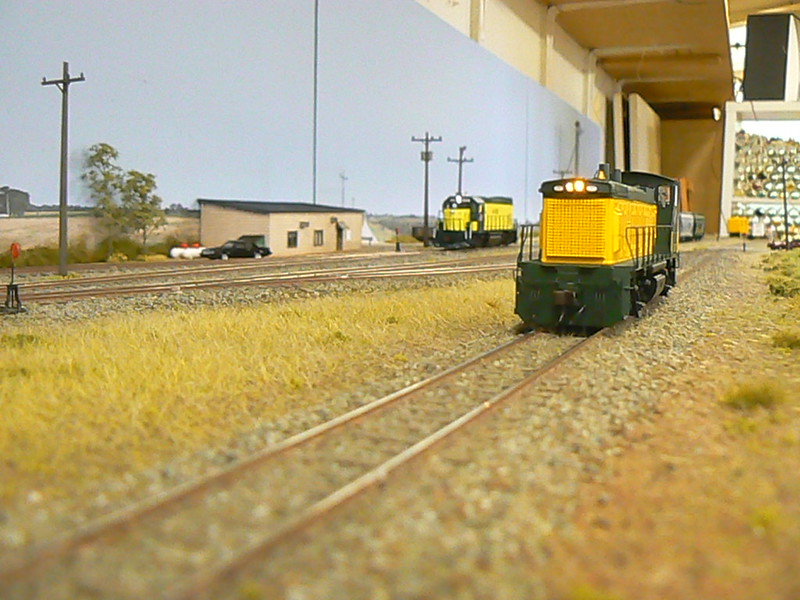 D'oh! Must put the end handrails on this MP15! Silly boy. 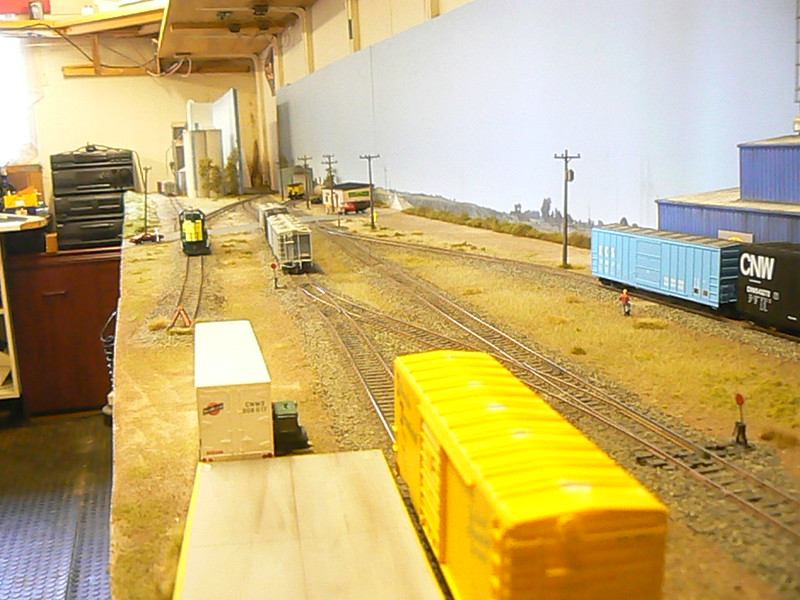 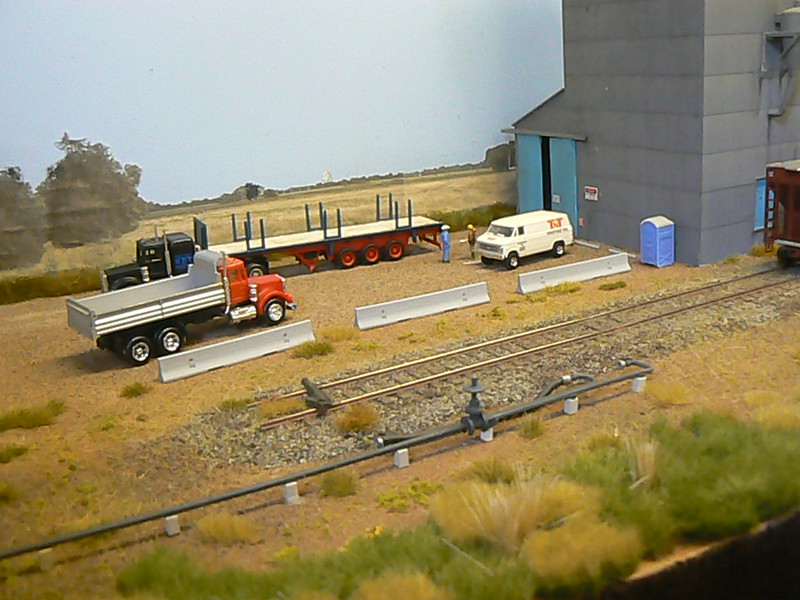 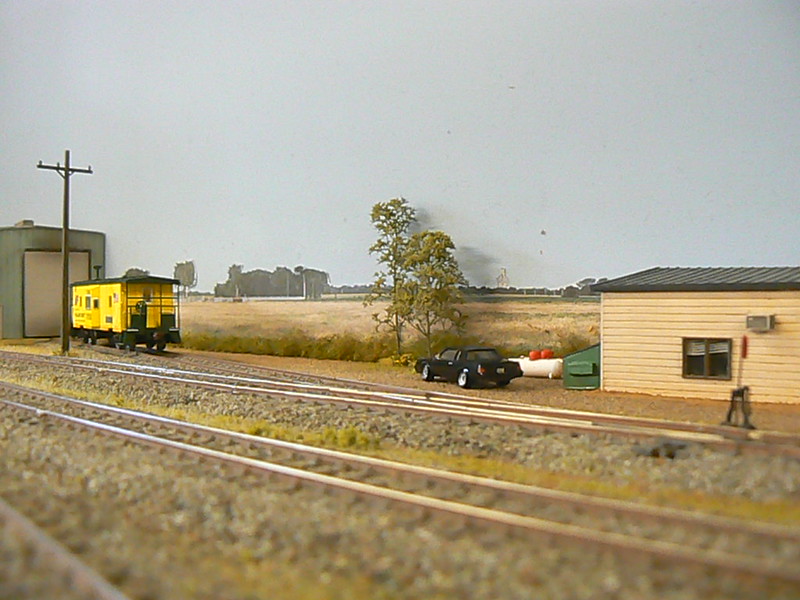 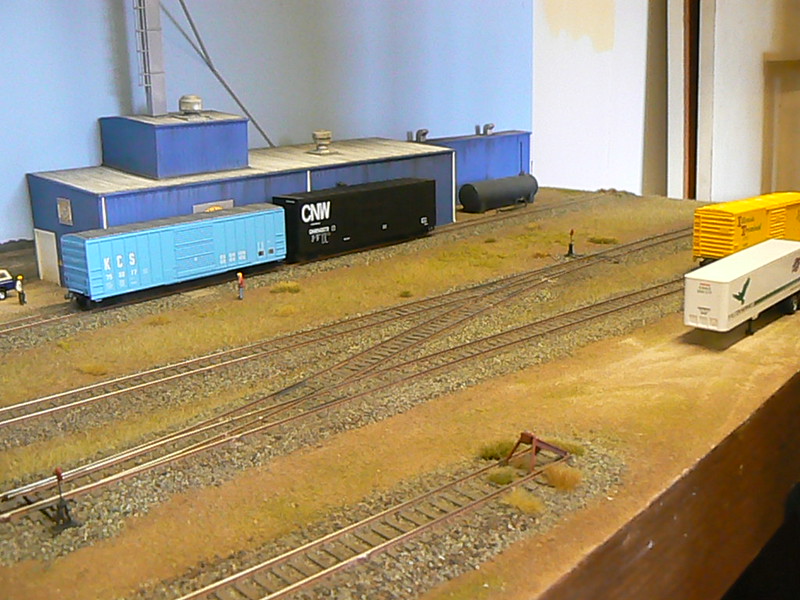 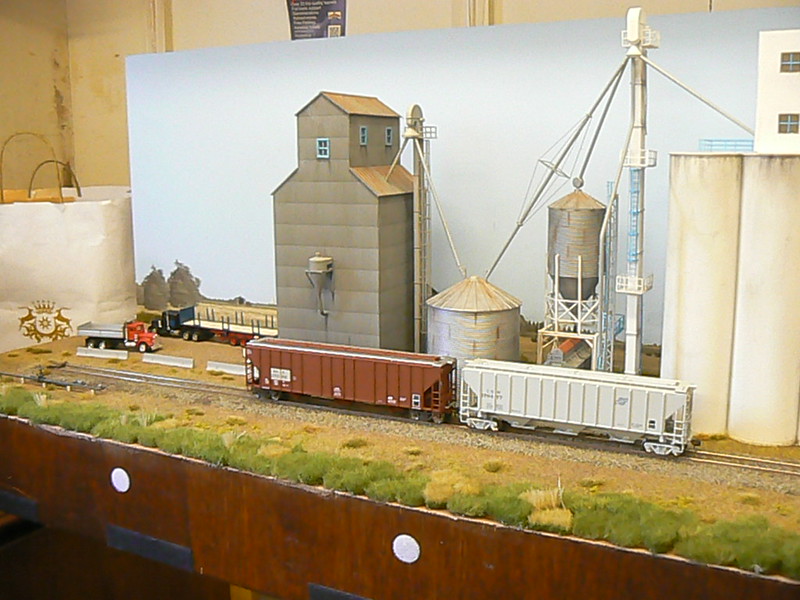 As this layout is appearing for it’s first time under my stewardship, at the Leigh show this coming weekend, I thought I’d better introduce it here!

Well it's different and a change, congratulations on your purchase, it's nice to have a railway, sorry railroad

That is a lovely looking layout and I'm quite jealous.

Why, thank you, Gents.
Now, to continue furiously preparing for the show!
John.
My layout: viewtopic.php?f=22&t=50673
Top

A couple of photos showing preparations and at the show. 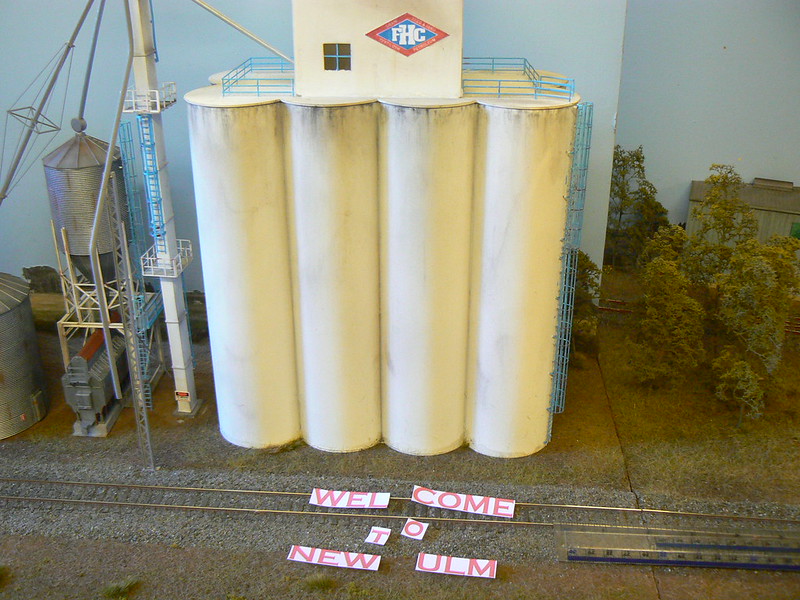 Although my grain silos are much smaller than the original, I very much wanted to recreate the large red “Welcome to New Ulm” seen on the top of them so, after some experimentation, I selected a suitable font and size and printed the words out. I had to cut them up in order to stick them onto the silos. 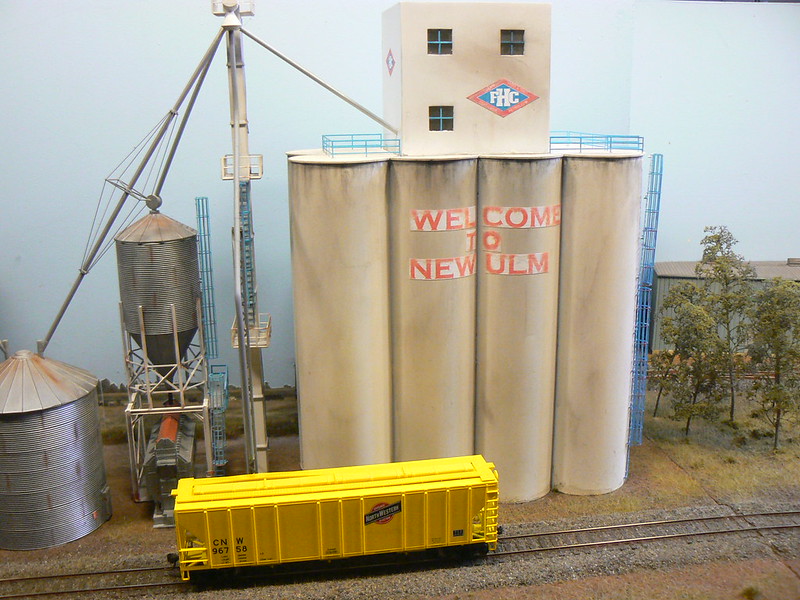 Here is the result, the red ink bled slightly but it just looks as though the weather has been at work. 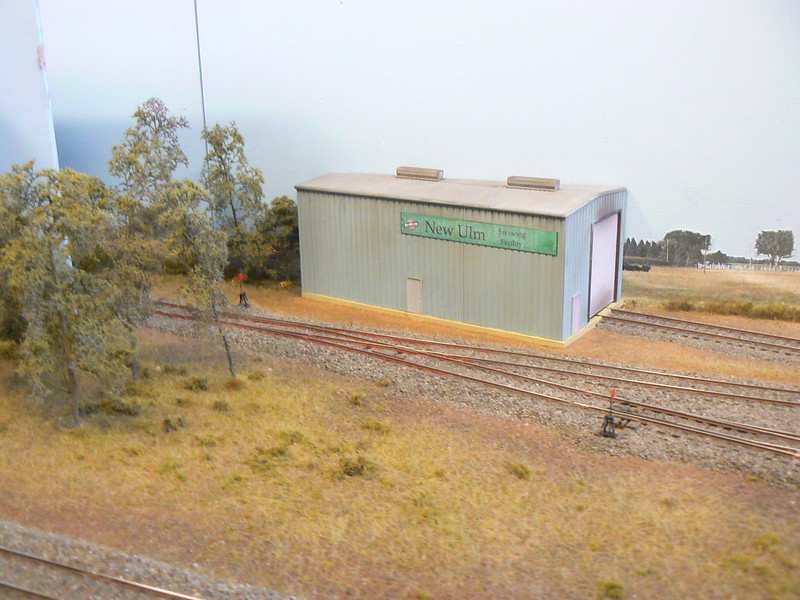 I also had to change the sign on the little servicing facility, not entirely successful but I’m reasonably satisfied with it for now. 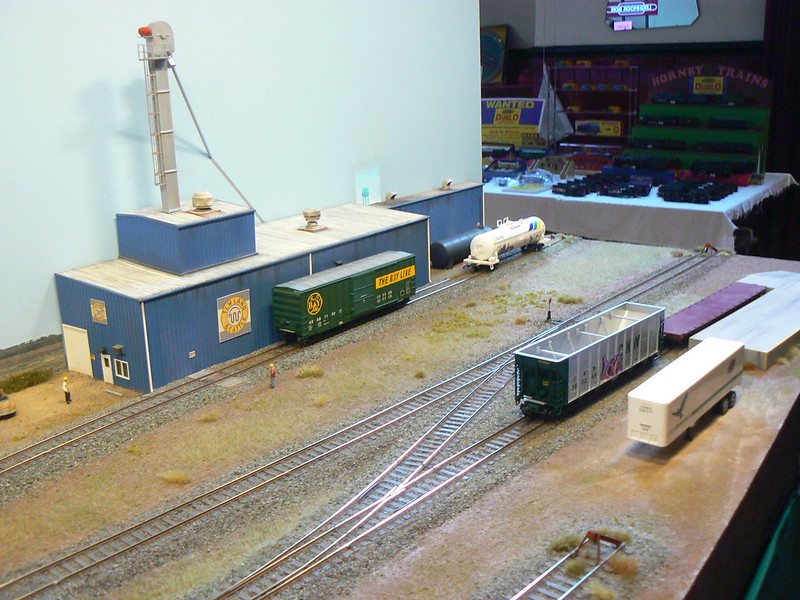 Here, you can see where I added a cut-out picture of the real New Ulm water tower.
Again, not totally successfully as you can easily see the join between the original back-scene and the picture but this was my third attempt at matching the blue.
Unfortunately, this water tower was demolished a few years ago and I couldn’t find many decent photos of it online. There were ladders and signal antennas sticking out from it so on photos, it looked to have ‘fuzzy’ edges and so I felt it difficult to cut around the actual tank, perhaps I should have persevered though. 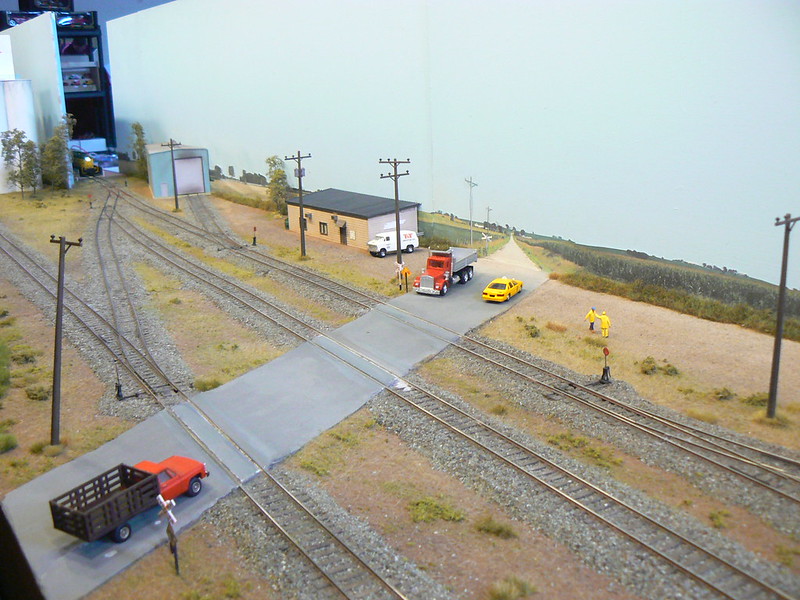 Several people remarked upon the ‘spacious’ feel of the layout, I was very pleased by this.
I should have taken more photos but was so very busy, next time hopefully, although I didn't receive any further invitations at the show, oh well!
Cheers,
John.
My layout: viewtopic.php?f=22&t=50673
Top

The "big sky" is very appropriate looking forward to developments.
John W
Growing old, can't avoid it. Growing up, forget it!
My Layout, My Workbench Blog and My Opinions
Top

This is amazing, sometimes I almost wish I could go and buy a ready built layout, (usually when self motivation to get on and build has ran away,) but others, I like being able to have it tailored to what I want.

Either way though, it's great that you have somewhere to run your stock, I could shunt that for hours.
http://www.c60lg.co.uk
http://www.bramleyline.org.uk
Budgetbrooke
Top

Thanks, Guys!
Nick, yes, it was exceedingly beneficial to me, an inveterate 'butterfly' to buy rather than build, it has given me such a boost to have something to operate on. It wasn't exactly cheap but it wasn't too expensive either so very worthwhile.
Recommended!
John.
My layout: viewtopic.php?f=22&t=50673
Top

I reassembled New Ulm recently as a good friend was travelling quite some distance for a visit. He also likes ‘big steam’ so here is a short record of the event; 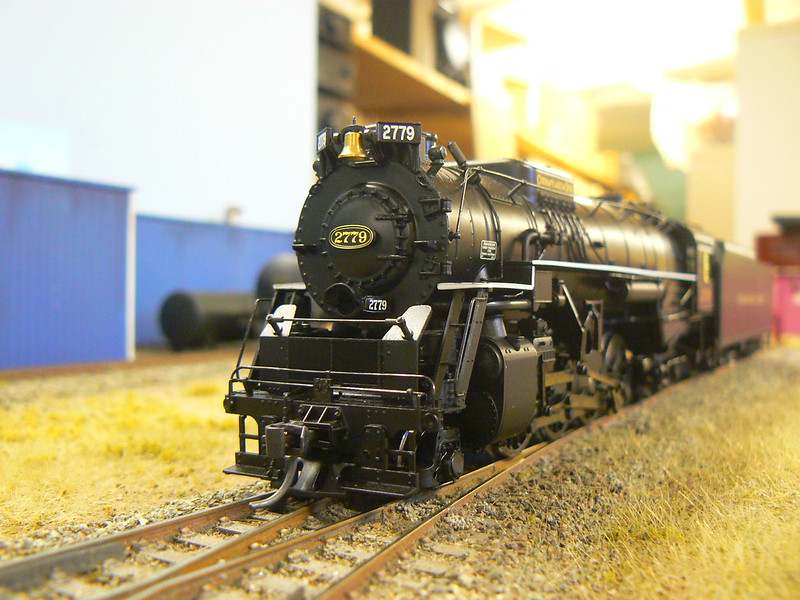 Proto 2000 C&O “Berkshire” 2-8-4, however on the C&O they were known as "Kanawha" types.
These were a wonderful class of 90 steam locos, designed by the “Van Sweringen” brothers, built by Lima. Almost exact replicas were also used by the Nickle Plate (NKP), Erie and Pere Marquette (PM) roads. 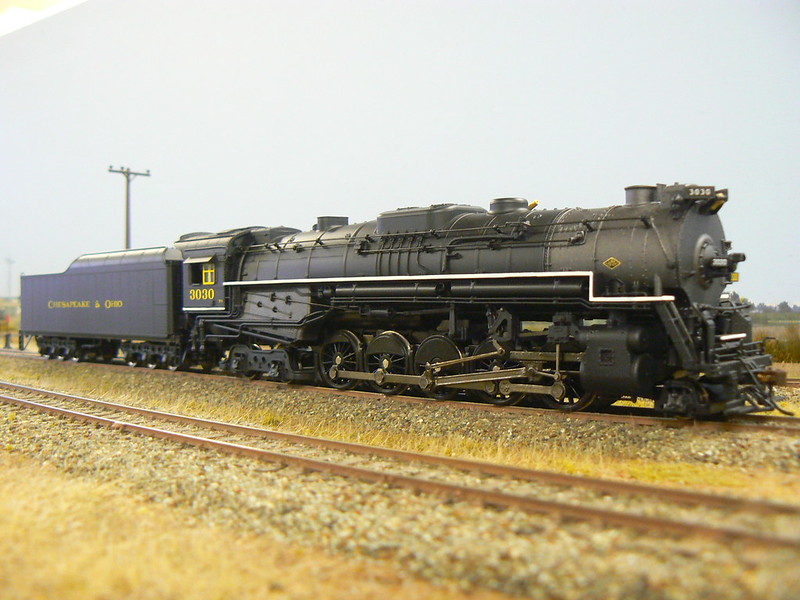 Broadway (BLI) C&O “Texas” type 2-10-4.
These were an enlarged version of a 2-8-4 similar to the Kahnawa’s above but built for the Erie. There were 40 examples and they had 69” drivers, big for such a large wheelbase and they were very powerful. They were so successful that when the Pennsy needed more heavy freight locos in WW2, these were the design copied. 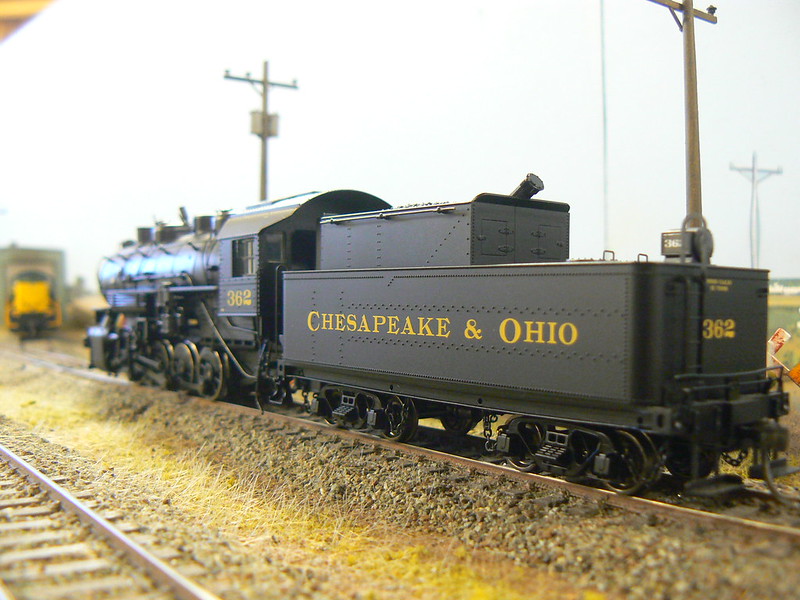 P2K C&O 0-8-0 switcher.
I have fitted a sounder decoder and speaker to this and blown my own sounds for it. If I say so myself, it sounds rather good. 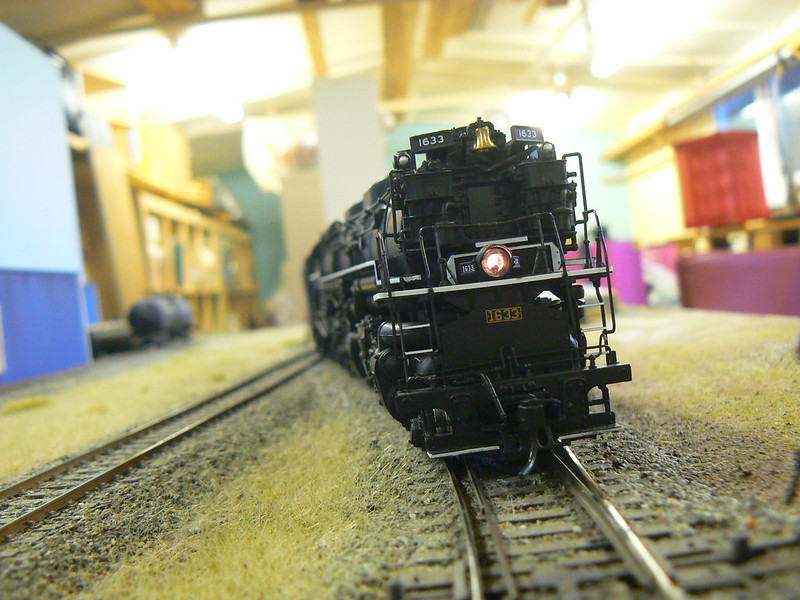 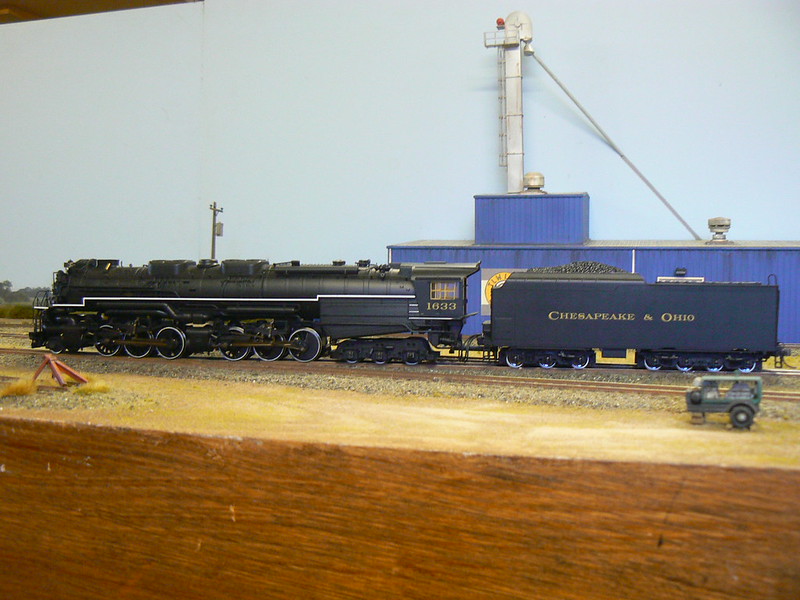 Rivarossi “Allegheny” 2-6-6-6.
These were yet again, an enlarged version of the “Texas” type above. However, this would have made a 2-12-4 so they split the chassis into two, making it an articulated loco and added an extra axle to the trailing truck because of the huge weight of the firebox.
These massive locomotives vie with the UP “Big Boys” for title of “Worlds Largest” steam locomotives.
They may not have had the length of the UP’s 4-8-8-4’s but they were heavier at over 600T and much more powerful at 7500Hp compared to a Big Boys 6200Hp.
Two of these could shift a 135 car, 10 000T coal train over the ‘Allegheny’ mountains or single handedly move the same train over relatively flat terrain, they were beasts!
There were 68 built in total, 60 for the C&O, 8 for the Virginian.
They are also why my online name is taken from the first example.
For more information see: http://www.steamlocomotive.com/locobase ... el=2-6-6-6
Cheers,
John.
My layout: viewtopic.php?f=22&t=50673
Top

That's absolutely superb. The sense of open space and beyond is really convincing.

You have to hand it to the Americans, they know how to produce a 'Big' loco.

Thanks, Guys!
That's very kind, Tony, thank you!
Thanks, Manna, you guys down under could also go 'big' when required! I do have one of the NSWGR Garratts, it's simply wonderful! Not as 'massive' of course but bloomin big, nevertheless.
Cheers,
John.
My layout: viewtopic.php?f=22&t=50673
Top
Post Reply
12 posts • Page 1 of 1