Post pictures and information about your own personal model railway layout that is under construction. Keep members up-to-date with what you are doing and discuss problems that you are having.
Post Reply
13 posts • Page 1 of 1

So it's about time that I started posting this venture of mine - I've been working away on it since Christmas (progress has been slow because of lack of funds, and working for the fund which currently elude me). It's quite an interesting line especially for me as it's a local line and one that I frequently find myself working on in real life - albeit in a slightly (completely) different state. 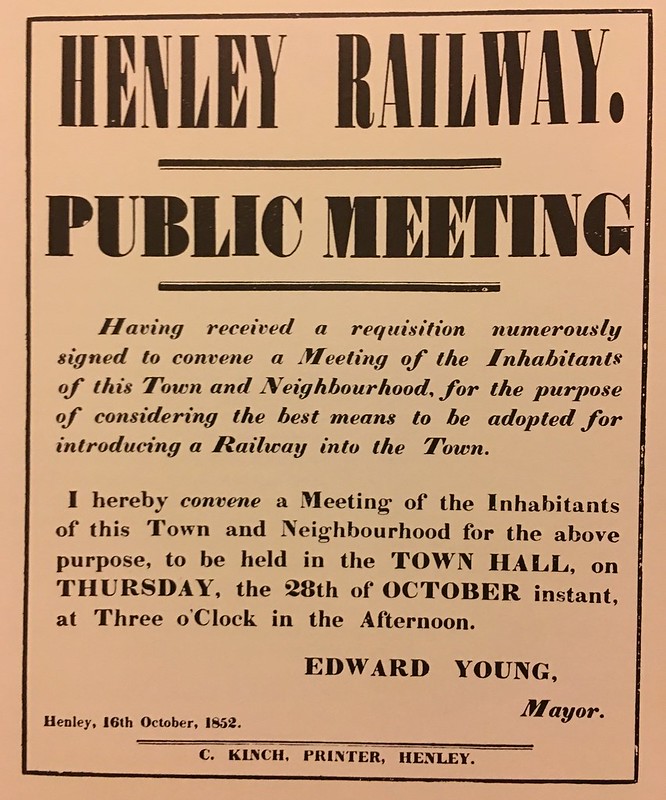 Henley on Thames initially opened in 1857 as a broad gauge 'feeder line' from Brunel's Great Western Main Line at Twyford. Since then it's gone through numerous changes like converting to double track, converting to standard gauge, and eventually converted back to a single track line. Being operated solely by GWR it encountered an interesting mix of traffic, as despite it being just a branch line Castle and Saint hauled expressed from Paddington frequently terminated at Henley (with the coaches shunted into its impressive array of carriage sidings) and the engines travelling round to Reading Shed where they could receive the appropriate attention - as whilst there was a shed at Henley it was only suitable for much smaller engines (with an array of mostly panniers and Metro tanks allocated there through its 46 year history). Various goods trains also terminated here with the usual varying loads like cattle and coal and also the more unusual loads like boats arriving by train into Henley's goods yard. Henley on Thames also sported quite an impressive over roof at the station to cover the 3 platforms (4 if count both sides of the bay platform).

If you've ever visited Henley on Thames station recently and you're reading this, you could be quite forgiven for thinking I'm making all this up as currently the station is wildly different, with it now being a single line branch with not even as much as a single set of points along the entire branch (other than those to get on the line). It's quite sad looking back at the history of it and comparing it to the single platform that now resides.

If you're interested in seeing how it's changed, you can visit THIS THREADfor some pictures from the last day of BR steam at Henley.

Anyway, history lesson over. I've constructed the boards with an eye to eventually exhibiting them - if I ever finish it enough! 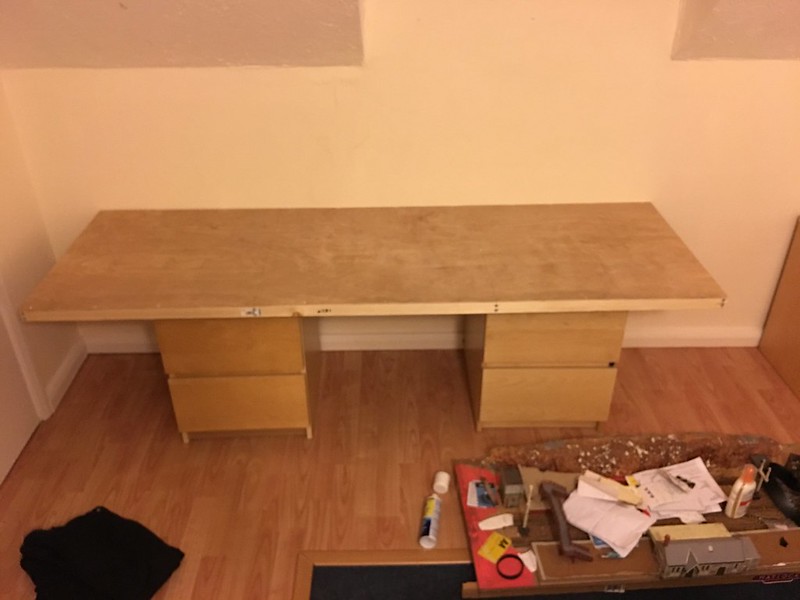 and have laid the track 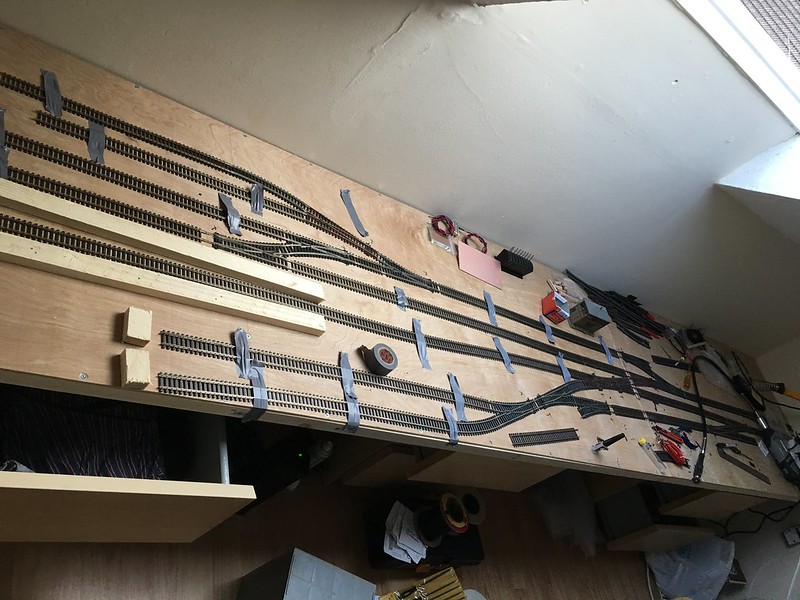 wired most of it 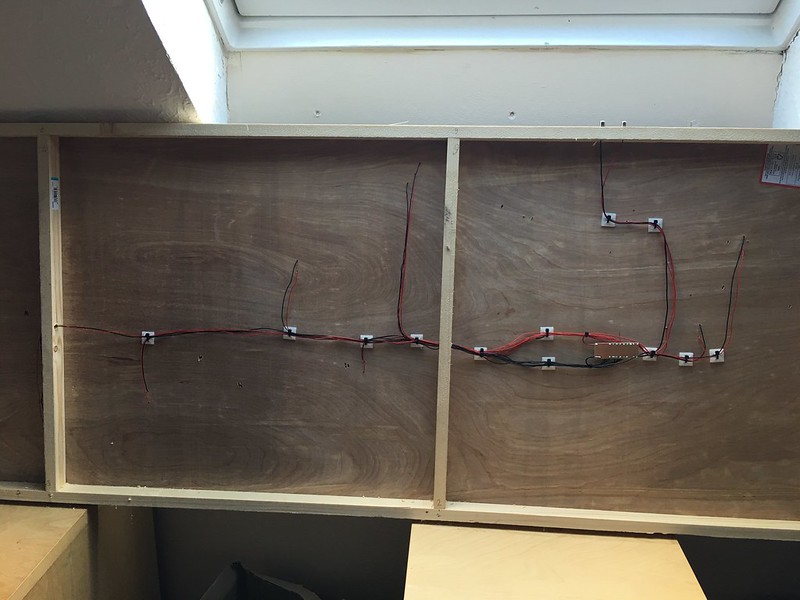 Installed the point motors,& partially wired those up 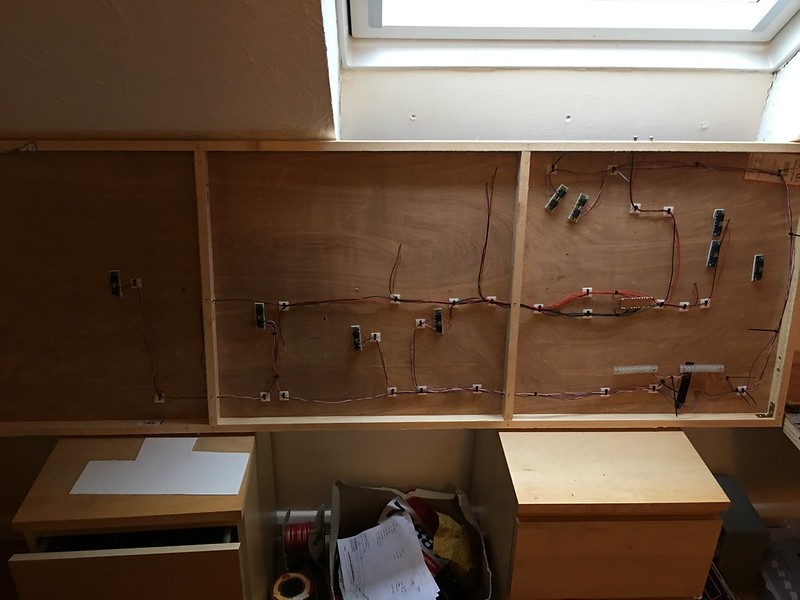 and have begun the arduous task of ballasting. 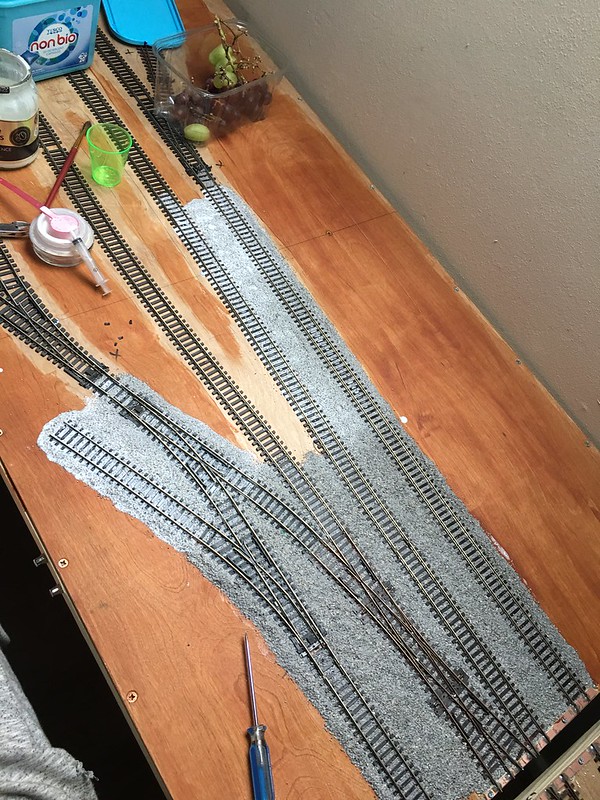 I ran the first train (I pushed it check all joints and points were alright), and naturally it had to be the Western's finest

and the pride of my fleet (even if it is just a free running model for double heading) GWR Castle Class, 5069 'Isambard Kingdom Brunel' 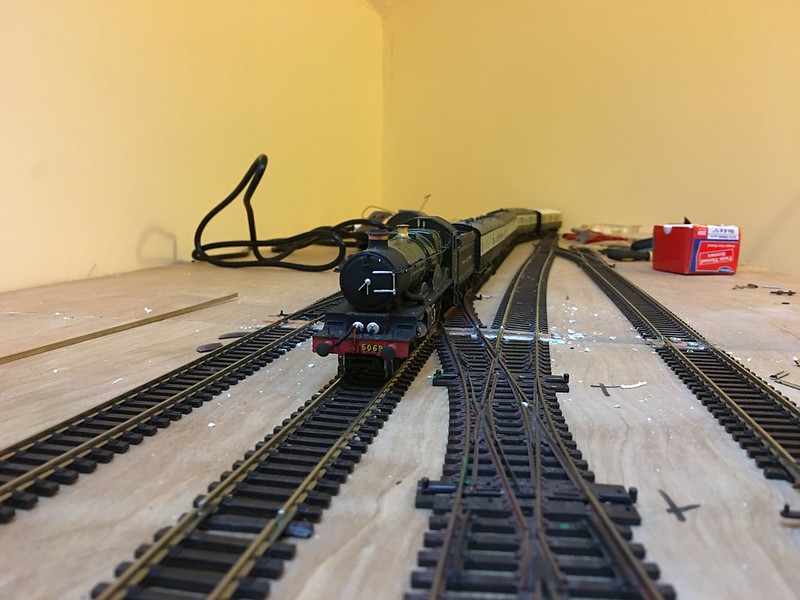 Hopefully the updates will come a little more abundantly than some of my previous project! But more wiring, more ballasting, and platforms are the order of the day for now!

ps Also, a thanks to Neal Ball, who is also modelling Henley-on-Thames, for providing me with a little bit of help. You can see his layout HERE
Henley on Thames in the 30's

I have been quiet, but the progress I've been making isn't much to show off (and it's been a little slow!) but here's an update all the same.

Firstly, (and mainly) all the underboard wiring - asides from lighting - is practically complete. Just one more point motor to go in, but that isn't too high of a priority at the moment. 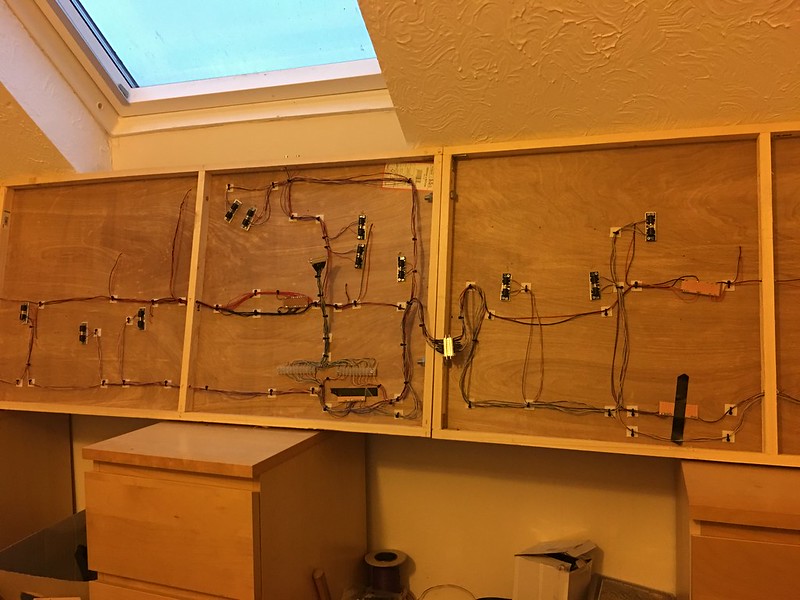 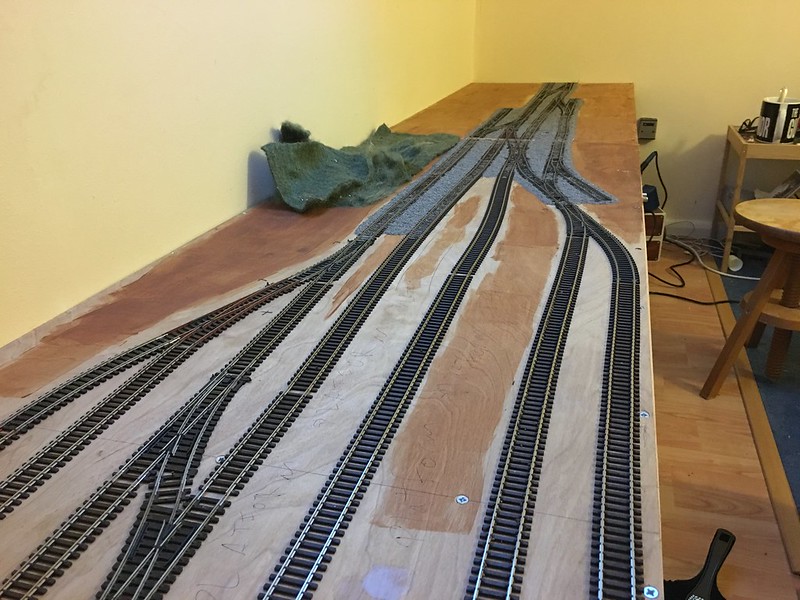 Lastly for now, the track has all be tested, and with only one or two minor tweaks - IT ALL WORKS! and once it's given a good going over with a track rubber it'll be perfect! (sort of!

) and what better way to celebrate than with a party of pannier's? (the black one is slowly being converted to a wartime pannier!) 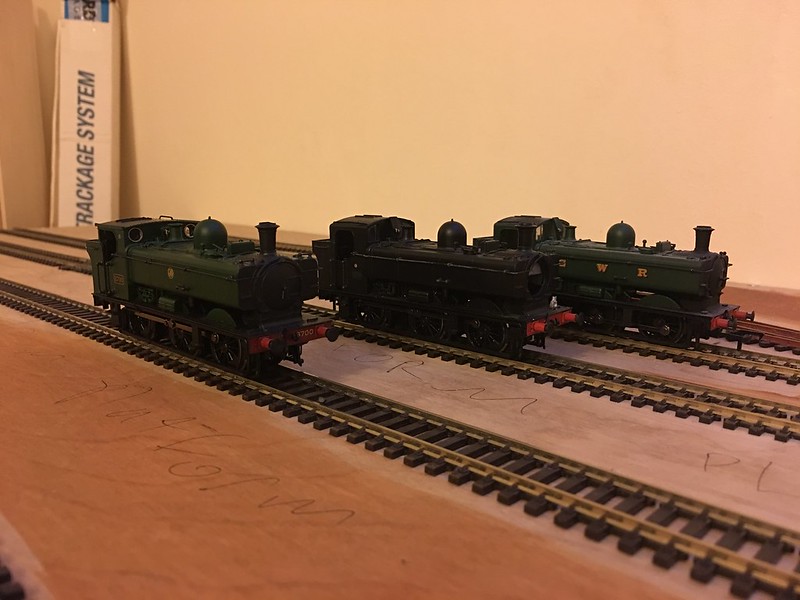 Nice and short, but that's all for today!

So it's been 18 months, so it's probably about time I give a small update on here. Plenty has happened (perhaps not 18 months worth

) I've built platforms, hills are in the process of being made, and fields are being...seeded? I'm pretty happy with how things are coming, although a lot is still left to do, like the fiddle yard, so functionality is a little tough, however on what is in place, trains run fairly well throughout, so I'll take that for now!

At the beginning of the year I had had a target of having something exhibitable for my model railway clubs January 2020 exhibition, however that's fallen through slightly, so I've put myself back again and am aiming for the 2021 alternative!

Plenty is still to be done, such as the aforementioned fiddleyard, the back scene throughout, the station train shed, and station building all still to be completed. And of course the plethora of other little (and large) details. I will however hand over to the photos and let them do the talking!

Thanks for looking! See you in another 18 months

very nice collection of chocolate and cream stock there

Alexander
"I love the way you call it Art, When you never even use your Heart, and I just wanna tear you Apart"
Top

So its been a while again, one day I might get a little better at updates (but thats not today!) so heres a little update, I've been whittling away behind the scenes and I've got a fair bit of scenery done lately.

Most noteably is that the goods yard is basically complete. I've got odds and sods dotted about, and I've dirtied the surfaces a bit, which isnt exactly petfect, but itll do.

Loads of grass is now in place in varying places, like the hills, and the bridge is closing in on completion, basically just needing weathering, then gluing in place and the road can be installed.

The station is progressing well with the platform lamps going in (not wired up yet, but thats one of the upcoming jobs to do). The kit bashed station building is slowly coming on, the next steps being windows, doors, roof and painting the interior.

Anyhow, hopefully these few pictures should suffice for now!

As the railway was proposed in 1852 progress is slow.

Ben. What make is the crane next to the signal box?

Only 168 years behind schedule, for some companies that could be described as early

That crane is a Cambrian Kit. Little bit pricey, once wheels are factored in, but quite nice all the same.
Henley on Thames in the 30's

Ex-Pat wrote:That bufferstop is very detailed and eye-catching - what is its pedigree?

Surprisingly it's nothing more than one of the standard peco ones. The ones in the platforms are the 'special' mainly trains ones

Nice to see you progressing with this Ben, love that crane!

Users browsing this forum: No registered users and 26 guests