I started building this a year ago as an extension to another layout, some of you may know – Trouvé. During this year it has increasingly become a layout in it’s own right, so as the main layout is no more, I am starting a thread for it.

For those of you who don't know it, here is a catch up:

Manquant is a small town set in rural France somewhere north of Toulouse and depicts an era that ranges from the early 1960’s to the early 1970’s, depending which stock I wish to run.

As with many rural lines, it has never been electrified, relying mainly on Autorails for passenger traffic and steam or diesel for goods traffic, depending on the era. The maintenance depot also seems to have some expertise in Steam traction as some of the restored old mainline express locos seem to be housed here occasionally.
The base board is 1800mm x 450mm. The track is all Peco 55 finescale and is DC operated.

All points are Wire In Tube but the turntable is electrically operated, with all 6 roads individually powered via a 6 way rotary switch.

All the buildings are scratch built with the exception of the signal box which is a card kit from the French company http://www.regionsetcompagnies.fr/

The roundhouse is based on the one at Montlucon:

For the Terminus, I have used Granville Station, far to the west of here, as my inspiration, but reversed. http://sncfsociety.org.uk/Site/Septembe ... C_7147.jpg

This is where I am up to:

Ahh back to the continent.

I do hope you find enough space for your "Mon Oncle" house. It's such a great model.

Phew, I was worried I wouldn't have a thread to visit for my holidays...
Top

I got some time last night to extricate Manquant from the depths as I need to look at changing the power feed from the back of the back scene where it originally joined Trouvé, to a tidier set up at the front of the board. I am also thinking that I may put a return on the back scene on the right hand side somewhere to make it look more like a standalone layout.

However, I never got round to doing any of that, as in the past month I have been doing some purchasing, so wanted to look at the new stock on the layout!

First up is an 040TC class steam loco, a Prussian designed, but French built, heavy shunter that would also be used for light goods traffic.

how do you print screen

Made by Fleischman it was €199.00 when launched 4 years ago and it’s like hen’s teeth to find now. I managed to find this on fleabay.de and for only €85.00. When it arrived I discovered it had been sold by a small model shop and the loco and box were in pristine condition and it runs like a dream, I think it is unsold stock. It looks pretty good too!


Second is something I have been waiting for for 18 months, since its announcement. This is the series of Autorails, the X2800s, I remember travelling on back in the 1960’s. It was certainly worth the wait.


Produced by REE Modeles/Mikadotrain, the detailing is superb and it runs like a dream and has lots of detailed extras to add when I get the chance.


I’ll get round to moving the electrics another night 

.
Manquant, and your new acquisitions, are looking good

.
To operate as a standalone layout, what will you have at the end of the board? A simple fiddle yard?
Old N layout
0-16.5 workbench
Micro 0-16.5 layout
Top

Now there is the rub......a real conundrum. You can see from the first shot that the right hand edge of the layout was built to meet up with Trouvé, so is a curve. Plus, Manquant was built to a maximum length that would just fit between the legs of a bed - so just under 6ft.

I could put a return from the back board on the right hand side where the track is still straight - just behind where the shops finish, but there is little room to curve the track to finally accommodate some sidings.

My thought process, since your enquiry

, is to use the roundhouse as the fiddle yard/storage area as this is a non electric branch line so it will be mainly serviced by {rather too many} Autorails or an occasional Steam loco, so short stuff.

I am mulling over a way to fit a small traverser in the space on the far right, which might suffice.

I am sure I will have come up with a plan by the New Year as the house will be full over Christmas so Manquant will be deep in Brigadoon mode! So whilst avoiding more xmas movies/games and other enforced enjoyment, I can sit down and really get my head round the problem.

Thanks for getting the thought process going

After a full house all over Christmas, I have had a morning to myself, so out came the layout…

I finally re routed the power feeds from the back of the back board (where it used to join Trouvé to the front and added the switch to change from motive power to work the turntable.

More interestingly, I found a little bargain on fleabay.fr, a Picasso that had been cut down to look like a trailing car. Unfortunately the way the chassis had been mounted it was way too high, so I decided to motorise it with a tomytec chassis and now it sits at just the right height, so yet another Autorail!

Here’s the two of them together, showing where quite a good job had been made of taking away the drivers position.

Finally a family shot of the autorails in the roundhouse:

Hi Peter, if you are free of the 6' limit or could have a clip on extension, an "overun stub" for the turntable entrance road could easily run into an off scene fiddle yard, either traverser or cassette shuffling board.

John W
Growing old, can't avoid it. Growing up, forget it!
My Layout, My Workbench Blog and My Opinions
Top

I've only just spotted this thread. Some fantastic skills and attention to detail. A few more pics please !
Top

Thanks for the nice comment, if you want to see more pics, you could spend the next week looking through the original main layout build:

Thanks for the link. Wonderful modelling.

I don’t seem to have been around much lately, but I have done a bit.

As Manquant is now a layout not an extension, I have fitted a return to the back scene and recycled the platform footbridge from Trouvé to disguise the track exit a bit. You might also notice a new building. 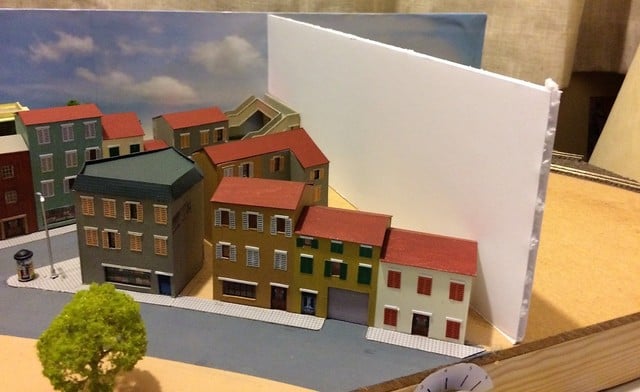 I’ve added a footpath so the residents on the far side can quickly get to the station and the town. 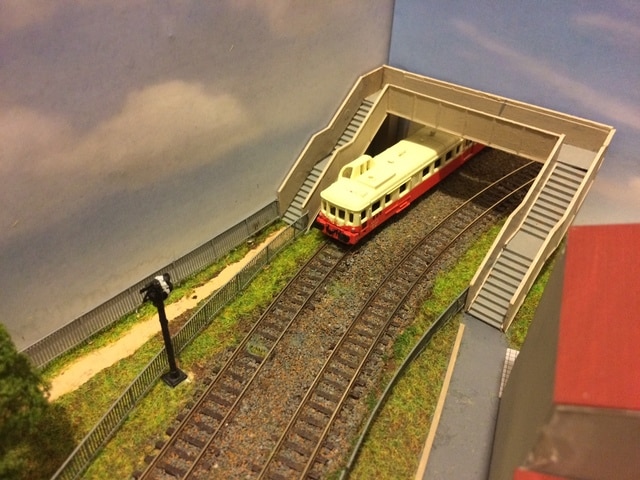 And finally, a little video….sorry it’s a bit shaky!

Users browsing this forum: No registered users and 17 guests