Post pictures and information about your own personal model railway layout that is under construction. Keep members up-to-date with what you are doing and discuss problems that you are having.
Post Reply
57 posts

PNP- There's no fiddleyard back there and, just as Notroh warned, it has become an obstacle for operation. I plan on buying a few points and sticking something back there so I can have stock out and ready to move.

Memran- the backscene is from ID backscenes and they really are great. This is the second one I've used and they make a big difference. At the moment it still operates like a train set, but the backscene offers the opportunity to hide some storage that means I'll be able to run it with less fiddling with my hands.

I've still not had a steam running session! I got a lovely Farish class 37 for Christmas, along with some more BR blue Mk1s. In addition I treated myself to some new 80's/90's road vehicles. The closest I can get to a 1/148 truck from that era is one of the old Intertrans MAN models which I picked up on ebay- for some reason this era is never well catered for. It's only just coming into vogue in OO so it'll be a while until there's anything in N. The truck is a bit late, but considering when the model was made it's exceptionally detailed.

The truck rolls in to deliver some barrels to the distillery. Someone is taking their classic Jag out for a spin.

While the new barrels are unloaded a Class 60 trundles south with a cement train.

I really like the lighting in these shots, so atmospheric.

That looks so very good !!
Seeing that last photo with the forklift truck made me recall that there was a timber
yard just off the north end of the Kingussie platform. Loved the area and scenery and
this reminds me of a week spent at Newtonmore.

Very nice, could you be persuaded to do a new panorama for comparison with the earlier one.
John W
Growing old, can't avoid it. Growing up, forget it!
My Layout, My Workbench Blog and My Opinions
Top

Bufferstop- I'll try and sort one out soon. It had occurred to me that this would be a good shot to take.

Notroh- I am! It's much nicer being able to use this in the warmth, without crouching. And it means I can work on it more and detail it more.
Top

The layout got put on top of the wardrobe last winter and then a lot of life things happened so I didn't get it down until the Christmas break. In the last year I've bought (and sold) a classic Porsche, taken it to Germany, supported my wife through the last year of a PhD, sorted out her last spouse visa application so she can stay in the UK forever, had our busiest year ever at work and ridden my bike a lot.

While no new work's been done (other than the laying of some "soil" around the big house) I've got a few jobs lined up that I'll be able to get on with - the layout is currently up full time in our office, which my wife is no longer using. I did get a lovely Railfreight Class 20 for my birthday which I had a play with last weekend. I also got a new Caledonian Sleeper Class 67 for when I'm running in present day form. 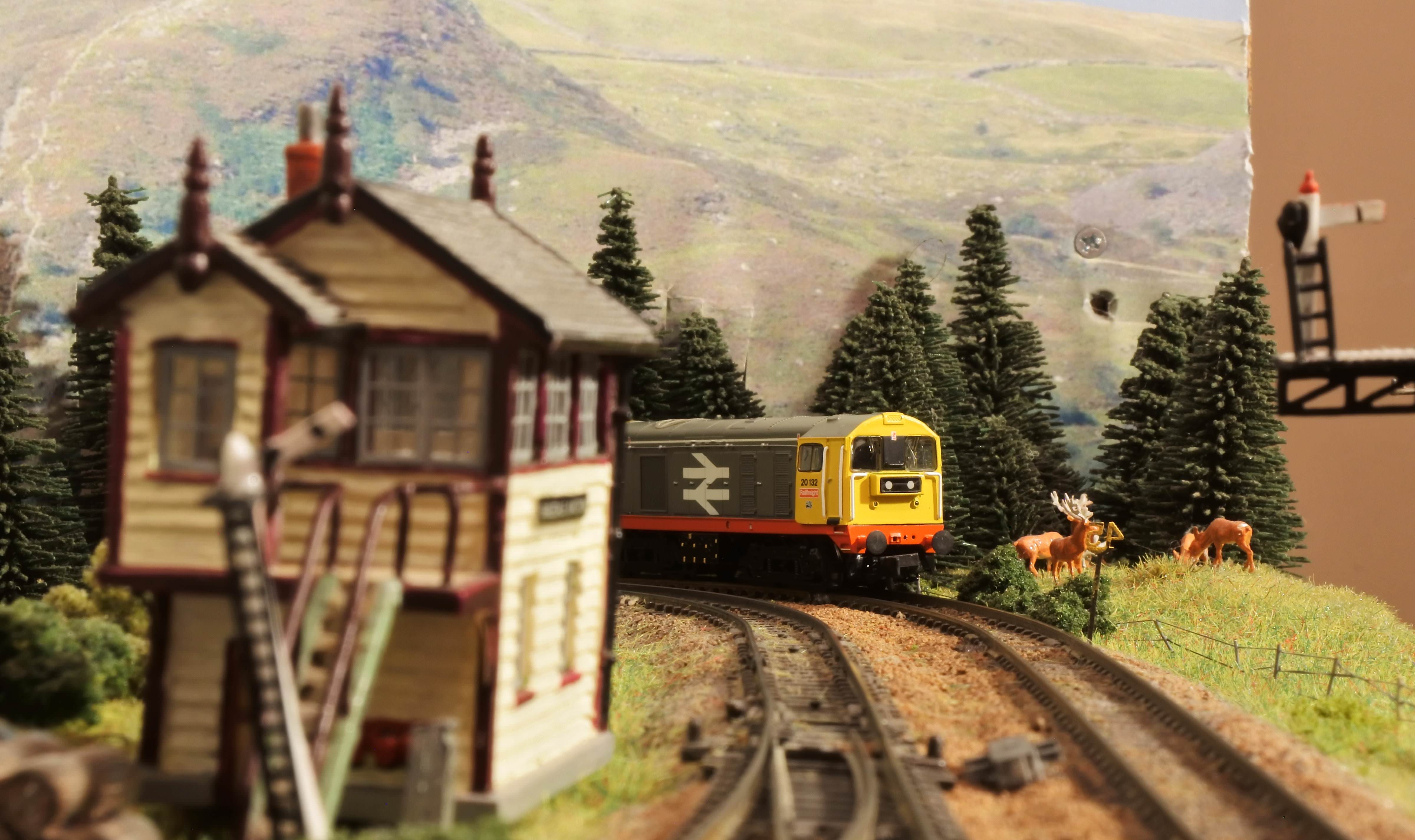 The distillery's Class 14 waits for a Speedlink working coming in the other direction to shunt. I've found the layout is well suited to doing a few shunting puzzles whilst a longer train uses the outer loop. 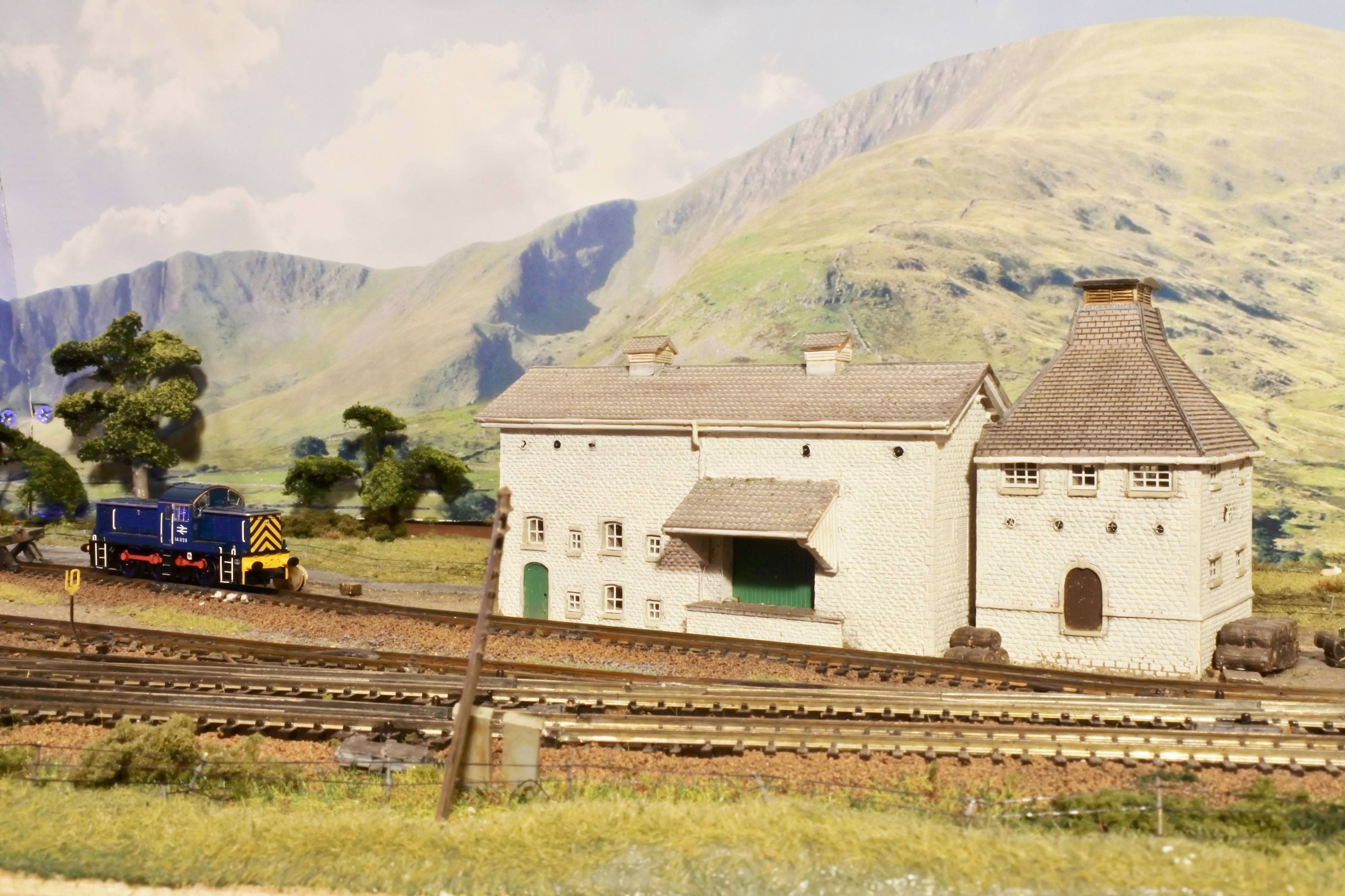 A class 27 arrives with the northbound Speedlink.

The 14 shunts a Tartan Arrow van I bought at the Great Electric Train Show at the British Motor Museum earlier this year. 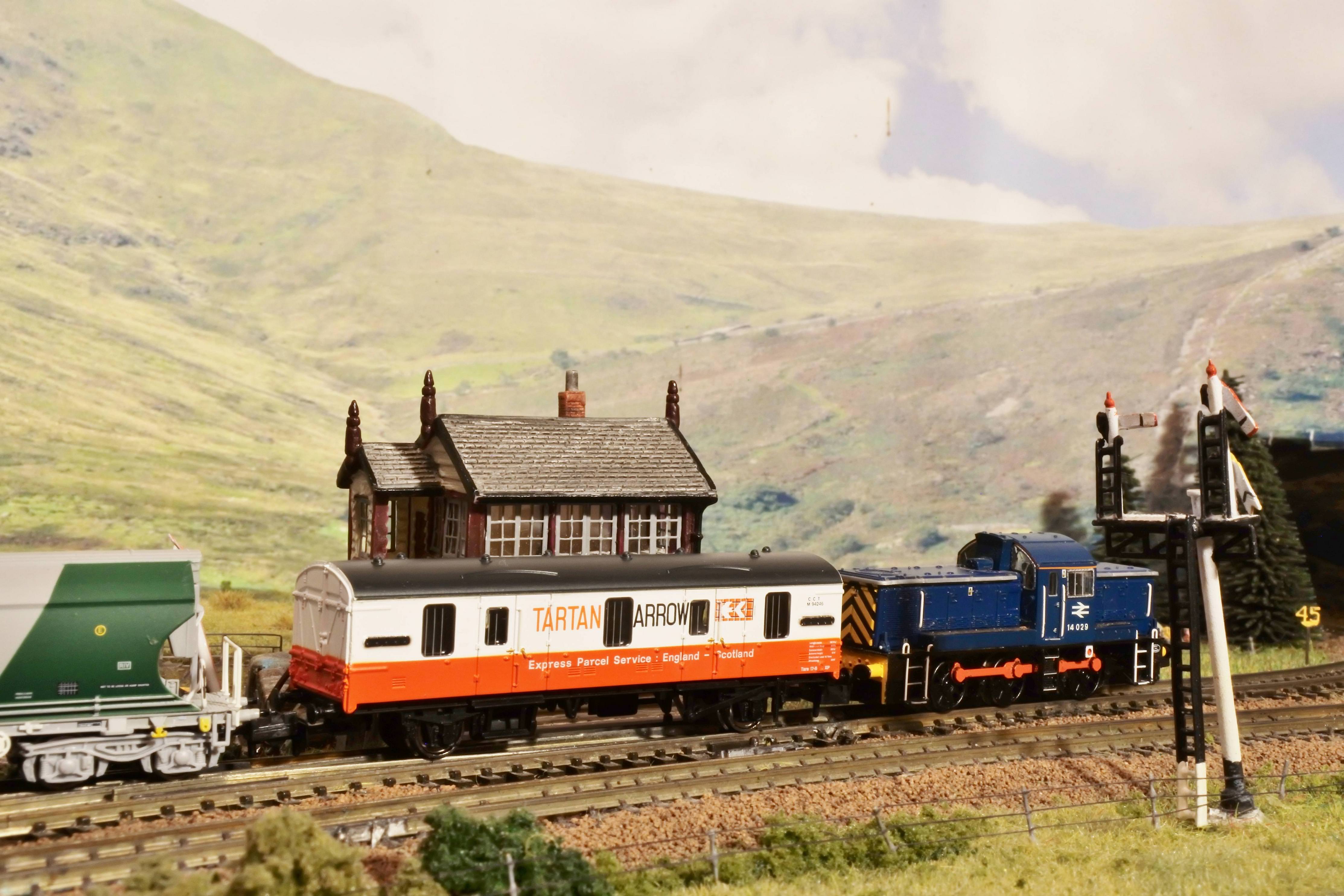 Later that evening, a 156 arrives with a slow service from Perth to Inverness. 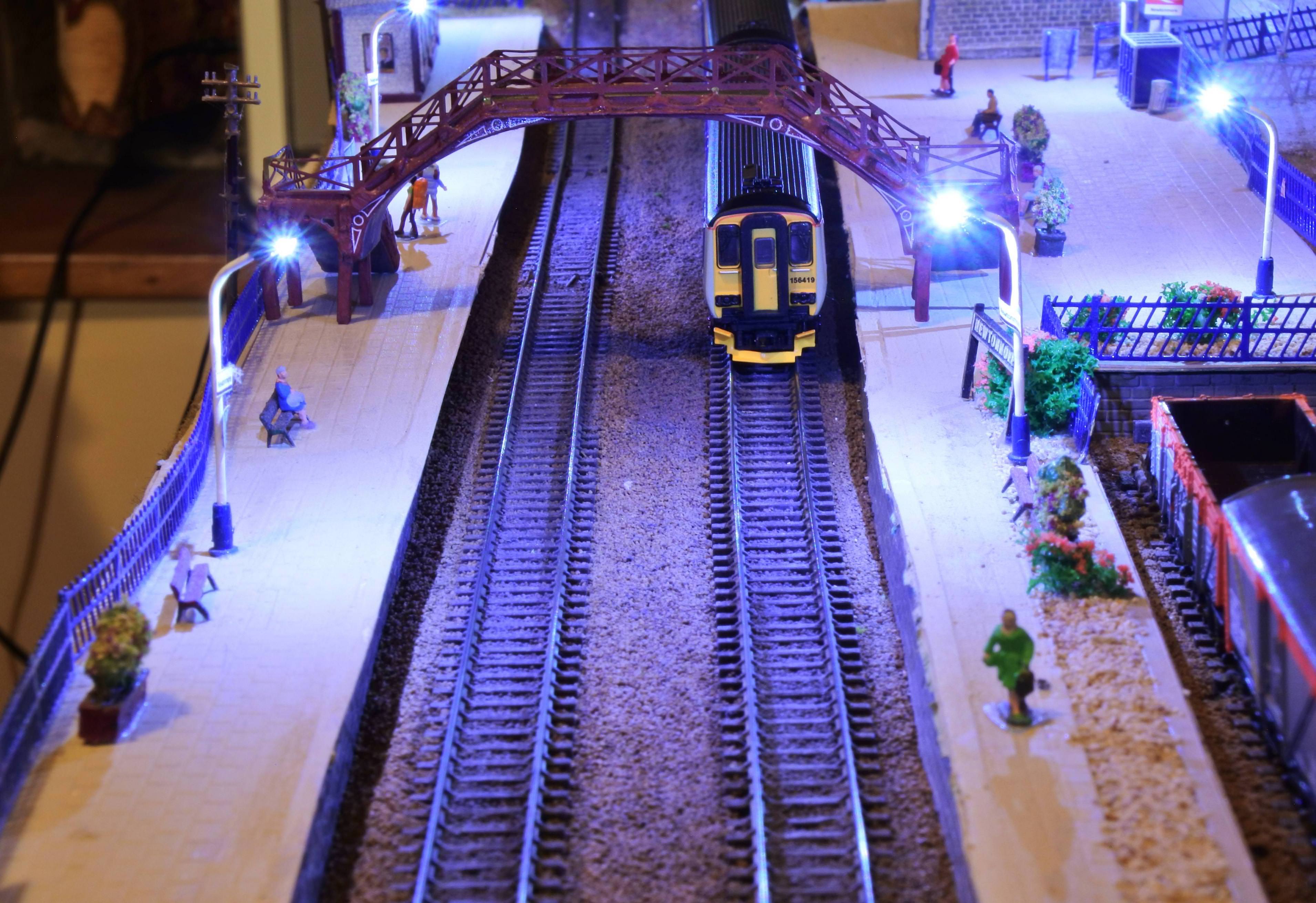 A bit more luxurious, a 37 heads south with the Royal Scotsman, complete with teak coaches.

Hidden at the back of the layout, a double decker (which needs re-logo'ing and a new destination board) arrives to pick up locals getting off the train. 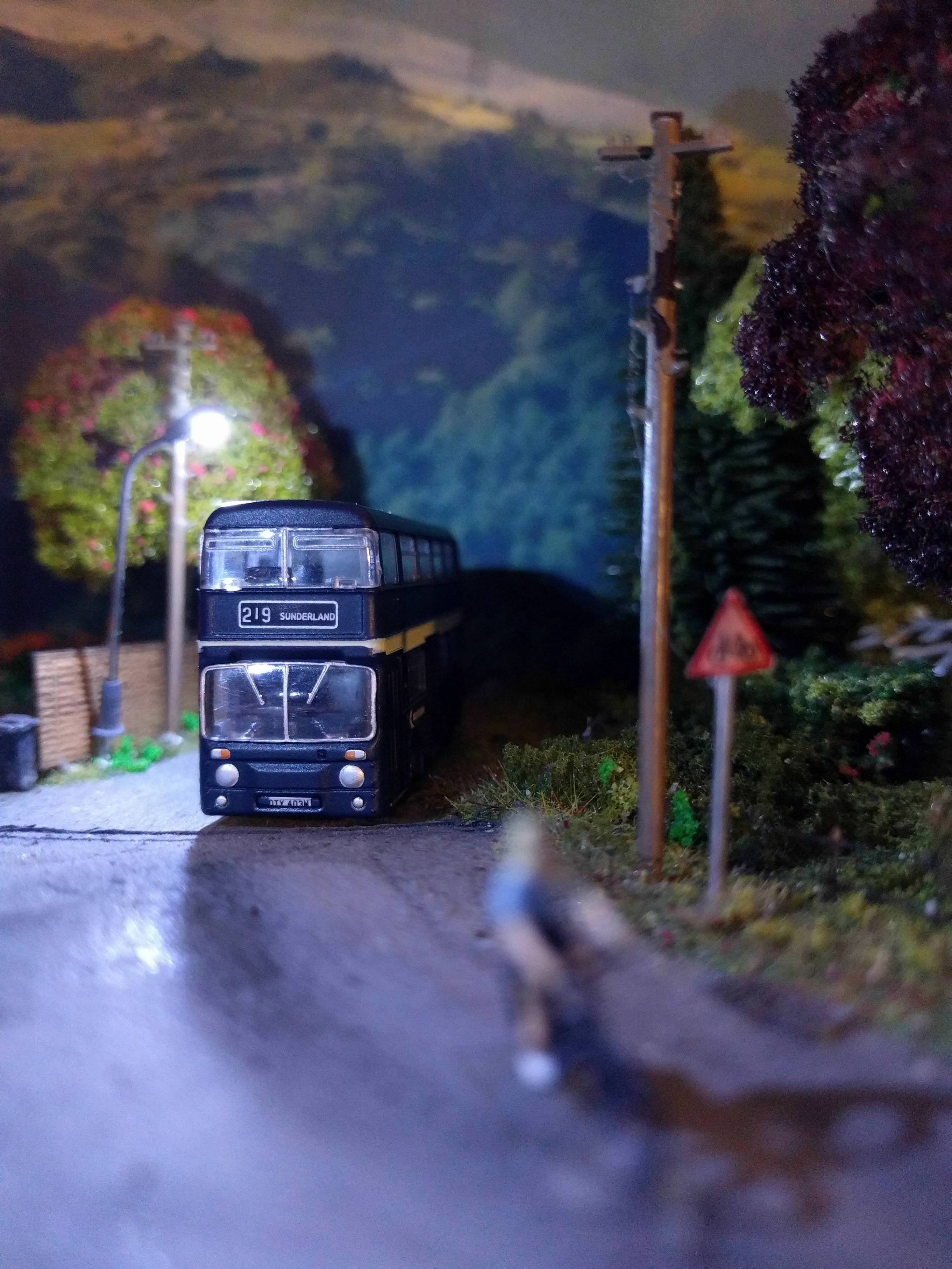 The garden at the end of the layout is starting to look better now. 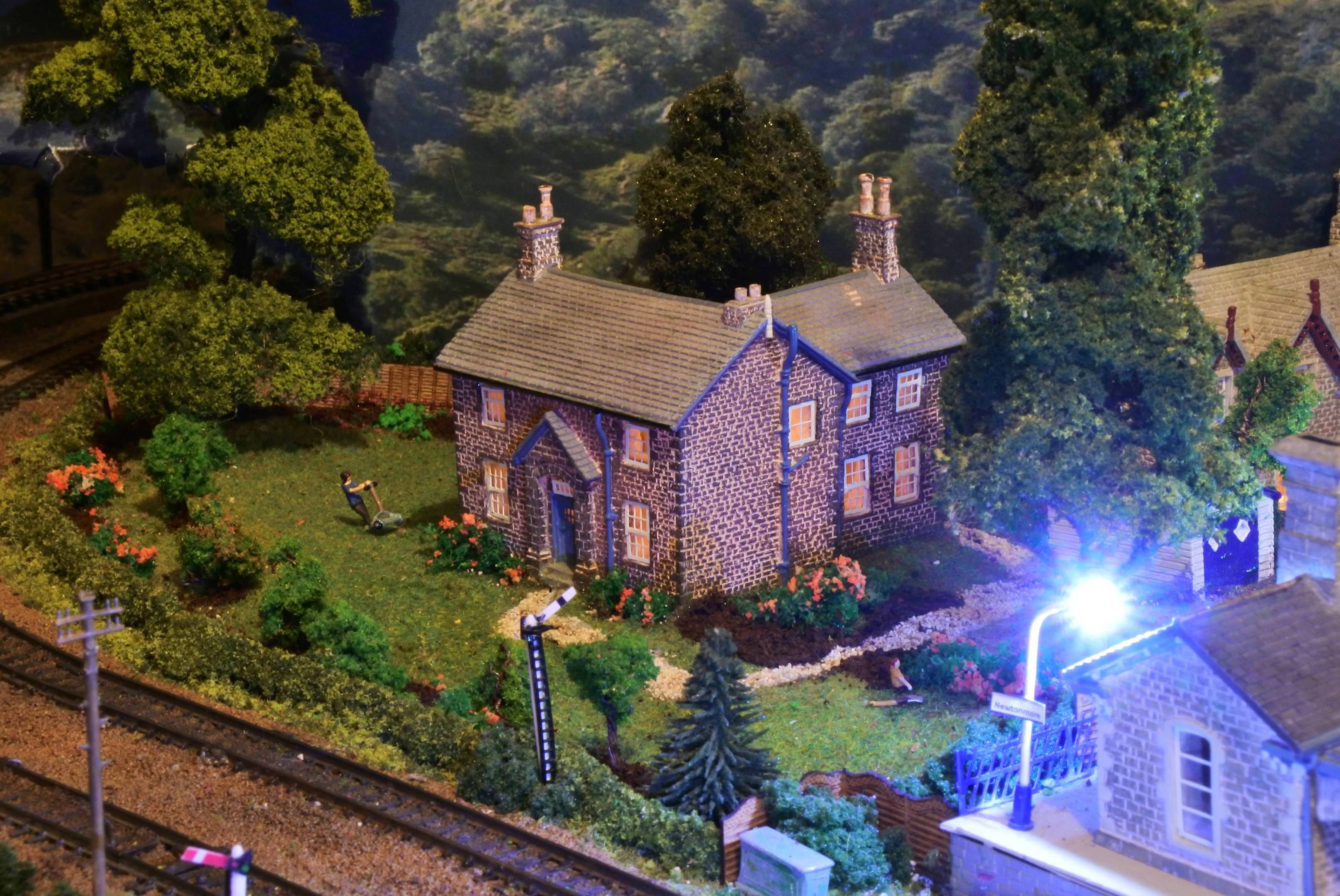 Good to see Newtonmore back on here.

You are right, the garden is looking much better now.

All my stuff still deep in Brigadoon mode....

Good to see Newtonmore back on here.

Luke, your layout looks great in those new photos, hope you get to spend more time on it this year!

Nice to see you again Luke and Newtonmore looks even more fabulous than it did last time. You really do have an eye for angles to achieve the best shots of locos and scenery. Hopefully we will get more regular updates this year than we did last.

Great to see another Scottish Layout, lovely detail work and I think your backscene is superb.

Thanks very much everyone. Sad to hear the N gauge is going quiet - I thought NRM was leading the way in making N gauge the next big thing!

As requested, here's an update a bit sooner than usual!

At the Great Electric Train Show, as well as the Tartan Arrow van, I bought some TP flowers. These are impressively detailed little plants that I hope will stand out more than bits of pink scatter. 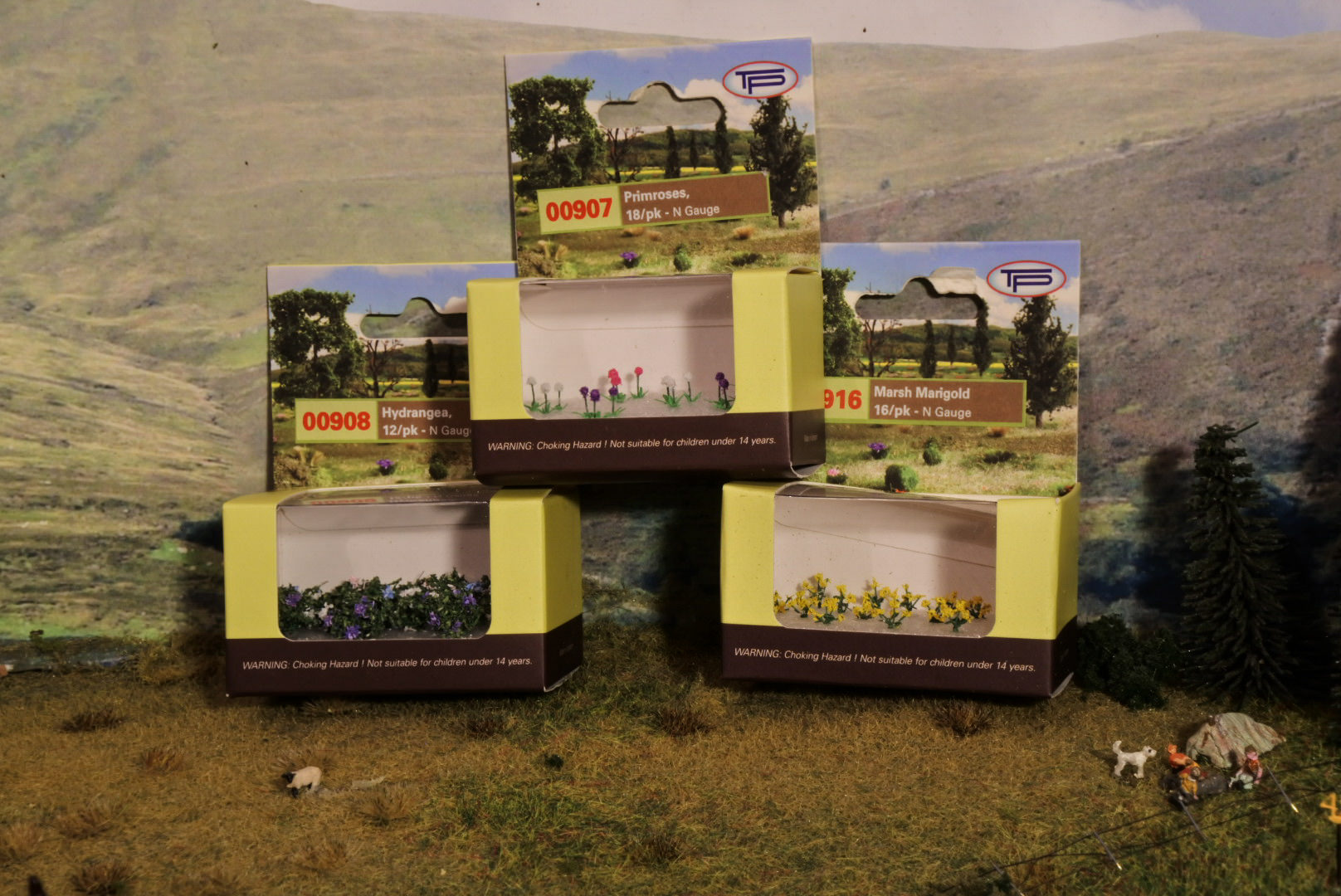 Most of the primroses and some of the marigolds went into the garden and I think they've made it look a lot more interesting. 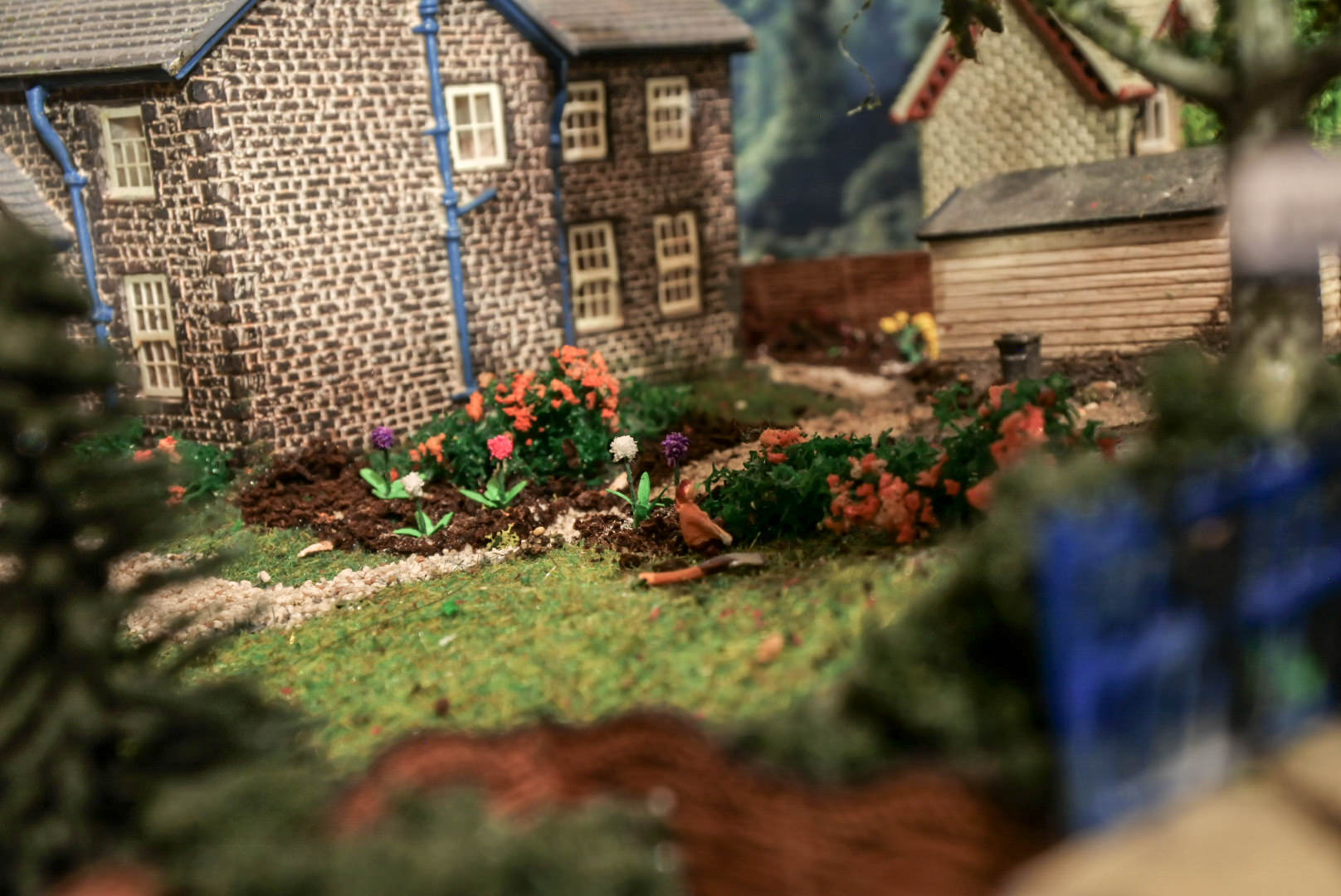 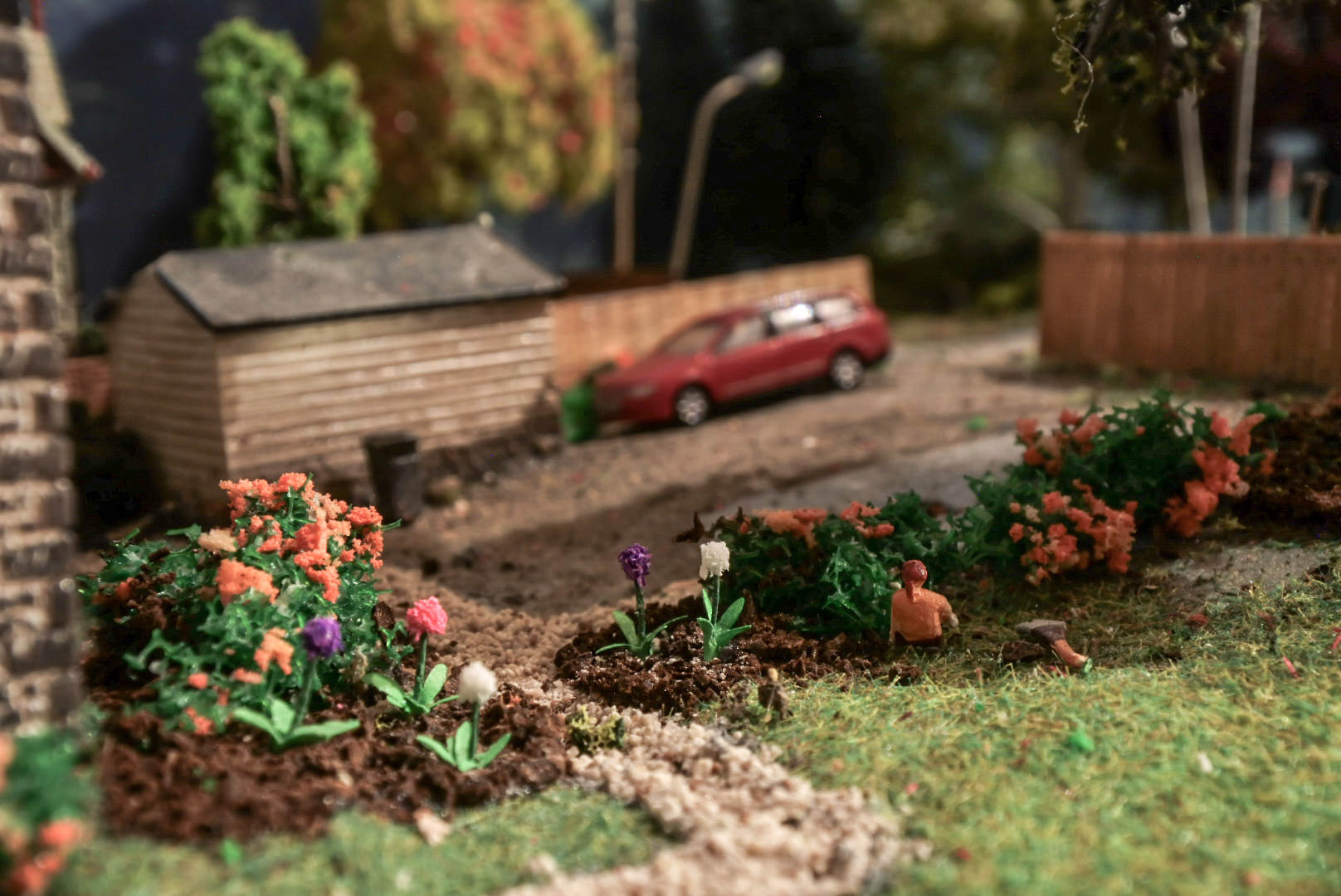 Most of what they bill as hydrangeas went elsewhere, as they are fairly generic. Some ended up by the roads- 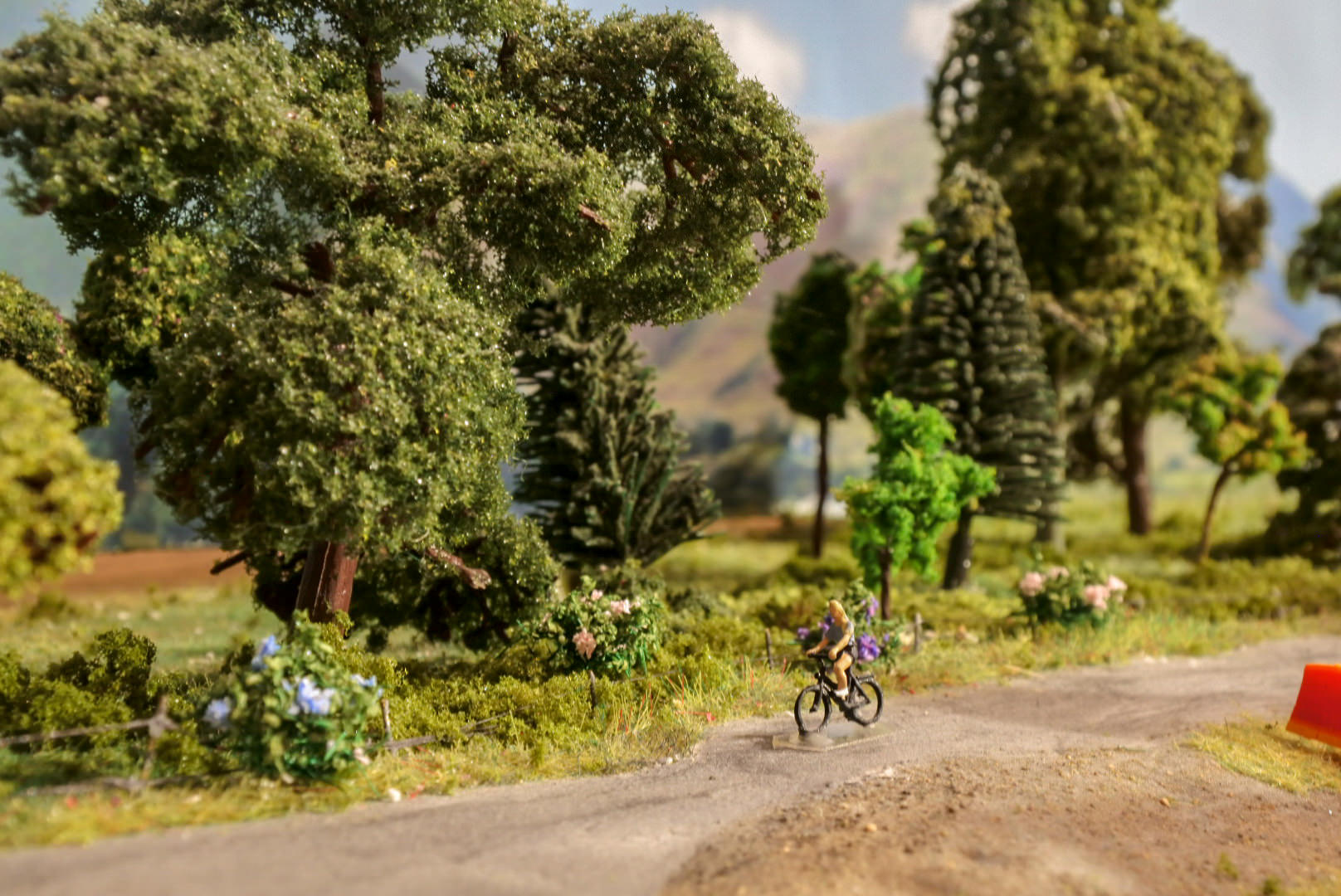 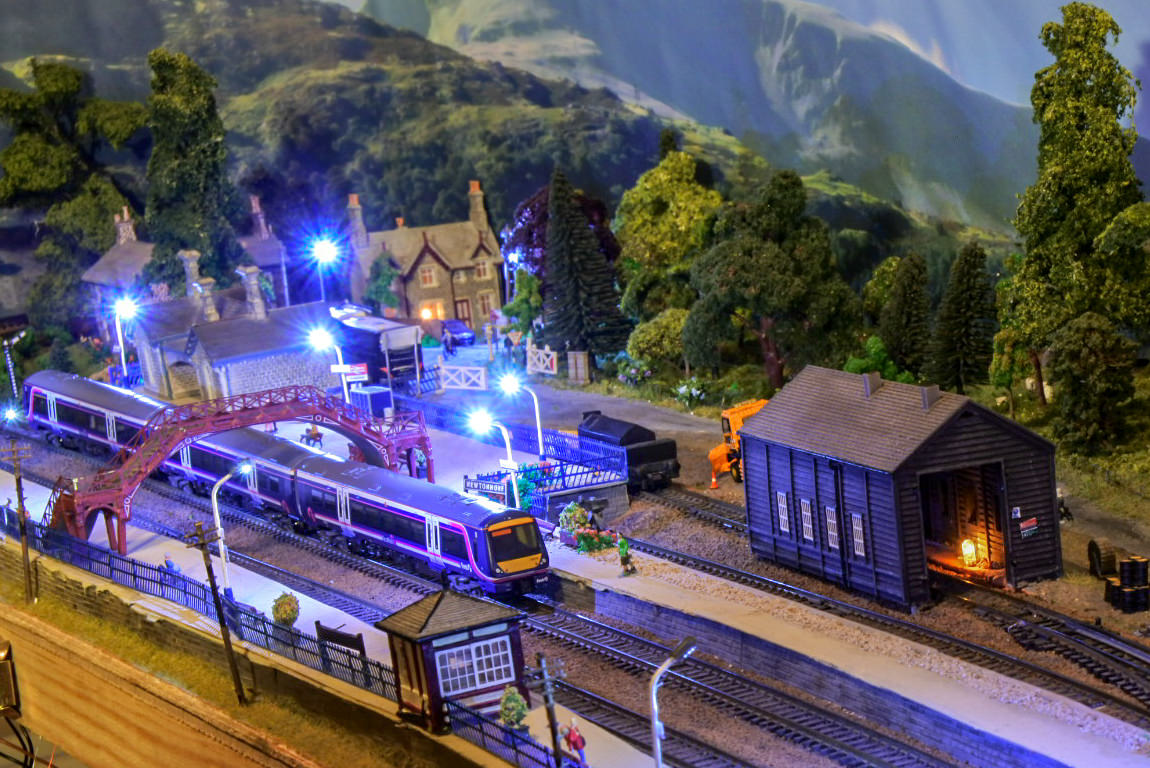 Some went in the fields- 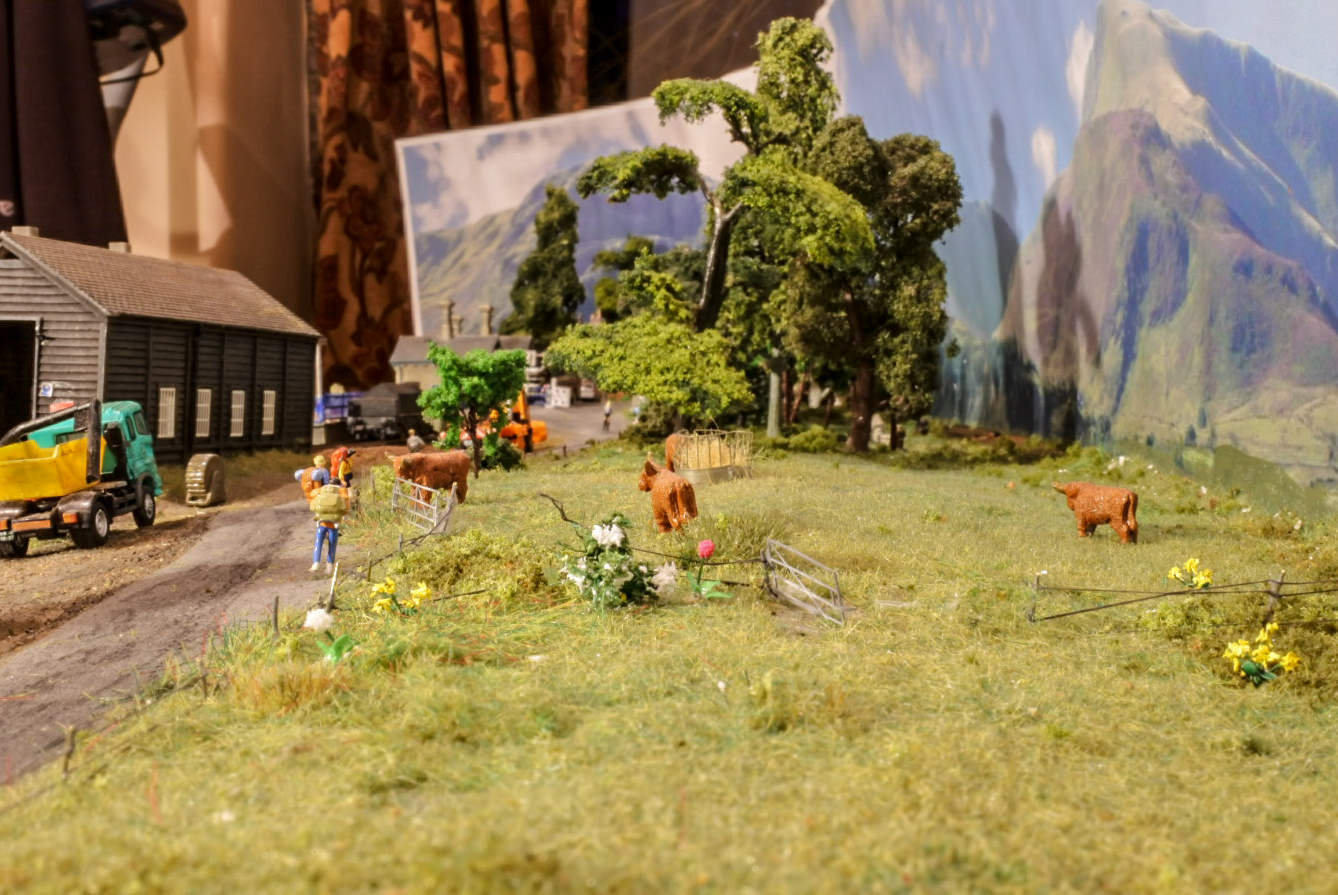 And the rest went by the track - 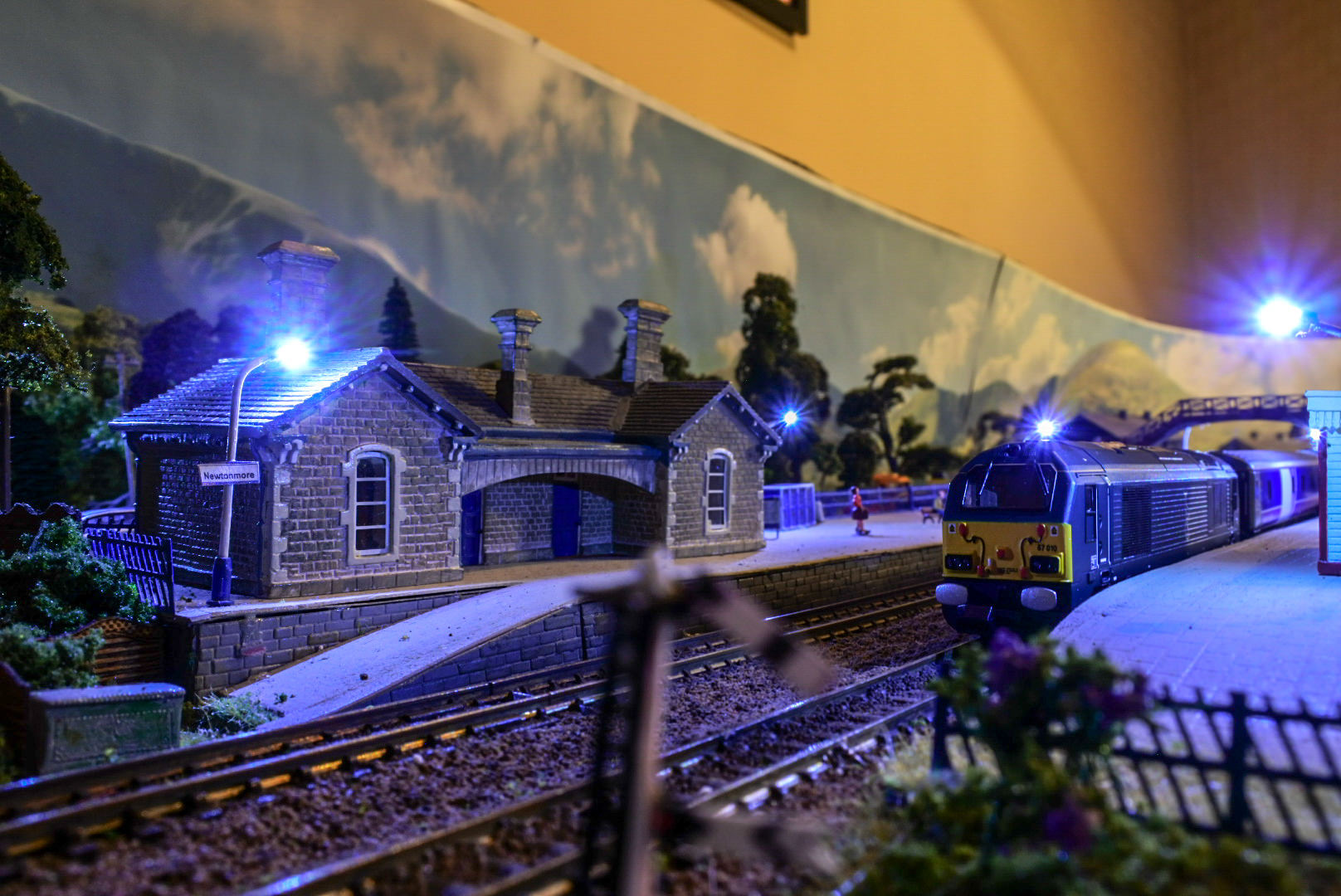 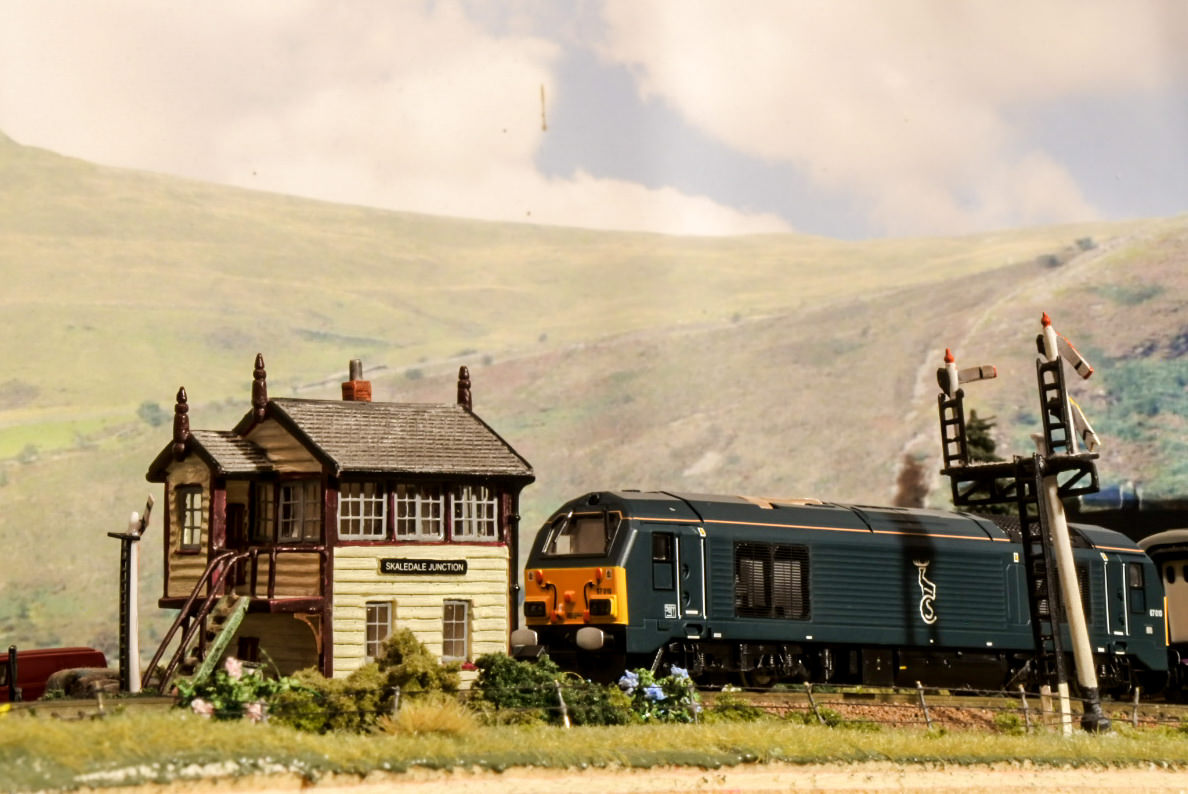 You'll notice that there's a new loco in these shots! The Class 67 Caledonian Sleeper was a Christmas present from my in laws and what kick started my modelling again. 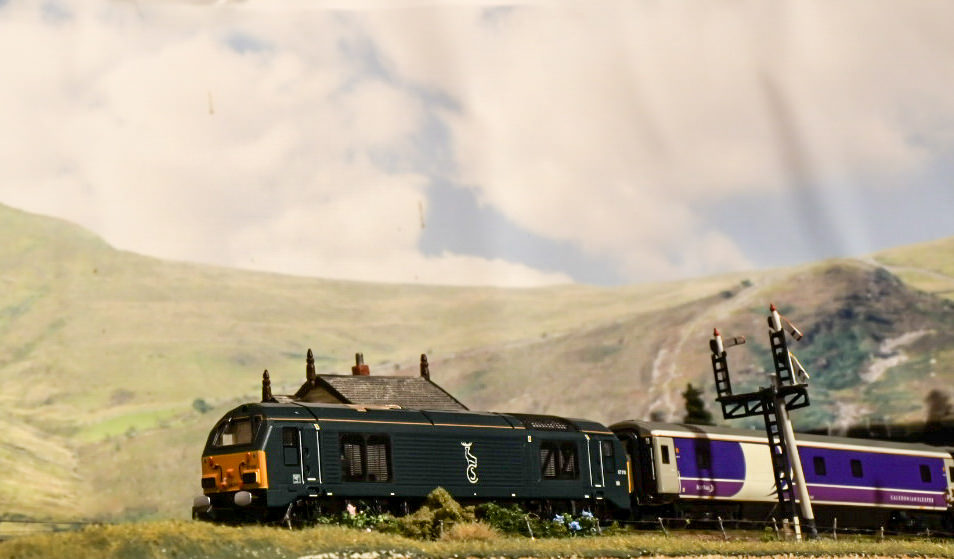 Here it is, passing my other 67, waiting on a test train in the distillery siding.