N Gauge oval in the countryside

Post pictures and information about your own personal model railway layout that is under construction. Keep members up-to-date with what you are doing and discuss problems that you are having.
Post Reply
84 posts

After putting it off for a while I stuck the station fencing in place, another one of those fiddly jobs and not as good as I would have liked but I think I will be able to use the advertising signs to hide the bad joins.

So having got the fence in place I have finished the station yard and the grass area in front of the station.

Staring work on the church yard in the top left corner next, the card base has bowed so a bit of scenic work required to level it up.The church will be removeable as it sits quite high and the layout spends a lot of time on it's end against the wall in the man cave (spare room) so likely it will get knocked. I was intending to add a couple more pictures but Photobucket is just not working at all well. I'm sure there have been discussions about it on here, I think it's time for me to look for an alternative.

heda wrote:After putting it off for a while I stuck the station fencing in place, another one of those fiddly jobs and not as good as I would have liked but I think I will be able to use the advertising signs to hide the bad joins.

The "bad joins" aren't obvious in the photos, unless you are referring to the wide panel at the right of the second fencepost from the left in the first photo.

If that is the case then I would say that it adds to realism, as very little fencing was perfect, and it can simply be explained away as an emergency repair job.

Must admit I do tend to look for the imperfections, the particular bad join in the first picture is at the bottom of the edge of the platform, but disguised with some weed growing up and through it. I agree it can sometimes look to perfect unlike real life so I'm generally happy with some wonky fence posts and the like.

After a rather hectic year not least bening told by my daughter in February that she couldn't have children, in May she announced she was pregnant and in August my grandson came in to the world eight weeks early. I'm already planning what I can build for him/us to play with.

Anyway back to the layout a little bit more work done, the village now has a bus service, a telephone box and a bench.

The embankment on the left opposite the church has become overgrown Canford station has working lights, not wired in yet as I need to add an extra resistor, there way to bright. An overall view of the work My next job is to get on with the houses and shops, there on a removable card base so I can work on them off the board and stick them down when finished. Once that's done I can start adding people and general detailing.

Firstly many congratulations to you and your family.

And can I ask about your station lights? Are they LED's?
I've always added a 1KOHm resistor to every LED I've installed but would it be possible to add another resistor on the incoming power line of the building to reduce the LED's brightness without them going out?
And does this resistor need to somehow be calculated as to what rating is used depending on how many LED's follow it?
All of my LED's are wired in parrallel so get the same amount of power (I think?) rather than serial (one LED attached to the next LED).
Thanks
End2end
"St Blazey's" - The progress and predicaments.
Welcome‎
Planning
Building
St. Blazey's Works & Depot thread
Top

Yes the lights are led, they have a resistor already fitted to operate on 12v but they are to bright so I shall solder another led in series to reduce the current and brightness. As regards the rating I have no idea, it's going to be trial and error, I have done it before so I know it does work. I have an assortment of resistors that have been supplied when purchasing led's and will try various ones. I always wire led's in parallel to help avoid problems. If you need more specific help with that I would suggest asking the experts on the electronics forum. Picture of the light before fitting if it's any help.

Nice to see you back and congrats on the family expansion!
E2E, "selecting" the right resistor is to limit the current to the LED, on a given voltage, oversizing the resistor will simply reduce the current and therefore the brightness. A second resistor in series with an existing one amounts to the same difference. i.e. 1Kohm + 1kohm in series equates to fitting a 2Kohm in the first place. Very hard to relate brightness to a "selected" value, so as Heda says, trial and error is best.

I think your layout is evolving very well, I hope you enjoy "playing" as much as building.
Top

Thanks chaps.
I only have 1KOHm and I think 560Ohm resistors so will have a try with both / multiples of both.

I forgot to mention the amount of greenery really gives the layout a sense of space.
Thanks
End2end
"St Blazey's" - The progress and predicaments.
Welcome‎
Planning
Building
St. Blazey's Works & Depot thread
Top

The gardens have been marked out, I've used artists acrylic to give some idea how they will look and to give some colour prior to applying scatter to avoid white bits showing through. I think there actually going to look more suburban than village.

This is how the boards will sit on the layout

Off the layout, the patio's and paths are simply various pavings downloaded and printed off.

The next job is to make up fences, sheds and greenhouses.

Re greenhouses, I had a go at Mike's free downloadable one on this forum:
- see here
- and here 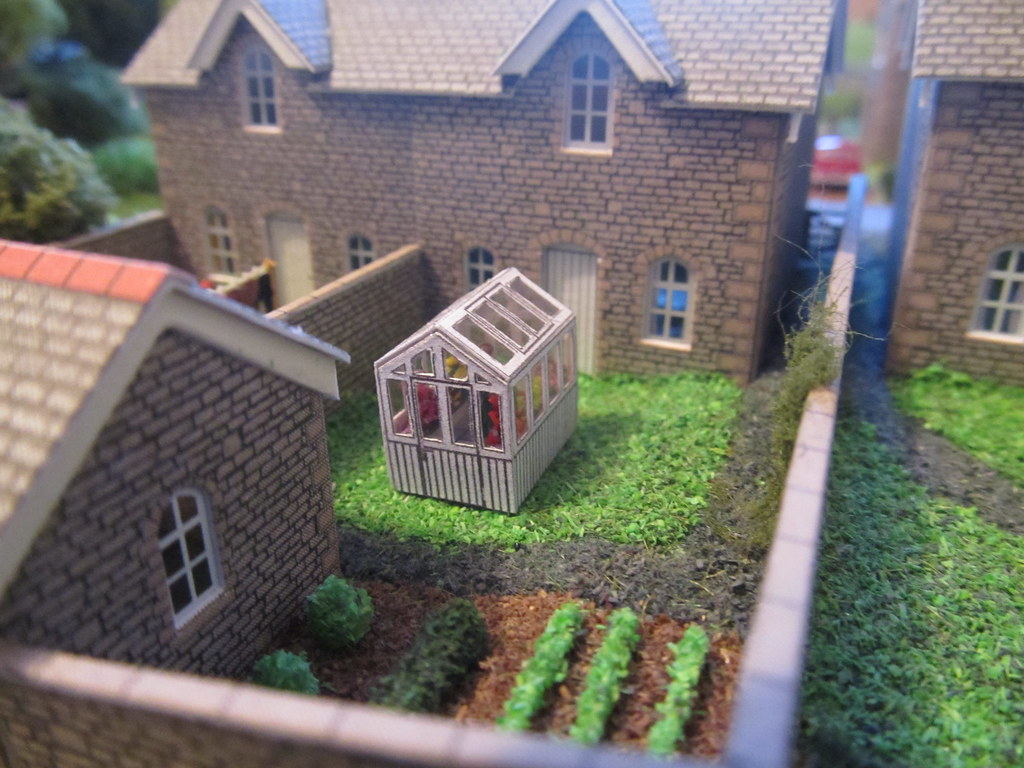 Thanks for that PNP, I've got a couple of Kestrel kit greenhouses that my sausage fingers should be able to cope with. What has got my interest though is your garden. I'm planning a couple of vegetable plots and yours in that picture is exactly what I m looking for.

There is a recent thread about what layouts on here inspired you last year, I spend quite a bit of time looking through the layouts here and take a little bit of inspiration from various ones, no one in particular. I hope my layout will give the same help to others, it's one of the things that makes NRM a great forum to be a member of.

I spent some time over the weekend painting and weathering the shops and cottages. They need a little bit more work but the roofs are looking nice and grubby now. I intend to clad the shop fronts in plasticard so haven't bothered to weather them. Inside the buildings I will add some partitions and led's so that at night some but not all rooms will be lit.
The little benches with plants on in the gardens are where the greenhouses will sit.
Dave