Post pictures and information about your own personal model railway layout that is under construction. Keep members up-to-date with what you are doing and discuss problems that you are having.
Post Reply
807 posts

Hello
Looking good there End2. I am eagerly awaiting the roof of this building. I had the same one mould problem when I was casting the Bailey Walls for my Castle. Have you resolved how you are going to finish the outer walls of your Inn ?
Top

Dublo wrote:Have you resolved how you are going to finish the outer walls of your Inn ?

Some more new purchases to jon the fleet including another exclusive brake van, a triple pack of weathered china clay wagons also exclusive, 3 bachmann Great Western coaches and finally a much bigger and better DDC controller in the form of an Sig-naTrack Ace 2 DCC Controller with 2 hand sets. As featured on The Great Railway Model Challange.

I've only just won them on ebay this evening so hope to have them by the end of the week. Finally a full blown DCC system for St. Blazey's.

I also purchased a Pegasus Hobbies - Russian Farm Houses kit from a toy fair for £8 a couple of weeks ago. 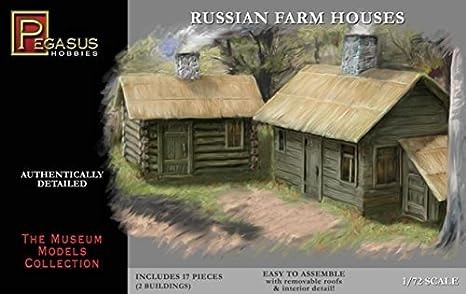 I've been building the larger of the 2 houses in the kit over the last couple of days as a respite from the complicated Linka Inn build.

For the Inn, I have already cast 4 large Linka slate roof moulds ready to start building the roof but need to sand the edges and work out how to glue it as one whole piece and still be removable.
Thanks
End2end
"St Blazey's" - The progress and predicaments.
Welcome‎
Planning
Building
St. Blazey's Works & Depot thread
Top

Did you win the lottery then? lol

How does Russia fit in Cornwall?

He he. I'm not that lucky Timbersurf.
I'm working for Disnasty (Disney) at the moment, getting up in what feels like the middle of the night but raking it in.

And, have you never heard of (P)Russia cove?

I will actully use the Russian farm houses as outhouses on the layout. Although they are 1/72, they are not very big, one room dwellings.
Thanks
End2end
"St Blazey's" - The progress and predicaments.
Welcome‎
Planning
Building
St. Blazey's Works & Depot thread
Top

I received the Sig-naTrak DCC controller with 2 handsets and have tested it with my double circle test track.
A great touchscreen controller that's really easy to use.
What I failed to do many moons ago was to record which DCC chip is in which loco and thus I don't know which CV's to mess around with for intial things like acceleration and decceleration speeds.
The Sig-naTrack does have the ability to interrogate decoders, but only if the decoder has the ability the be interrogated.
I think there is a Hornby decoder in one of my loco's (bought as such) and that definatly doesn't have the ability as I get an error.
You can program on the main with the Sig-naTrak but I kept changing over to the programming track output to program the decoders.

I tried out some nice slow running with 2 trains on the circles of track which went well........until Marley (our cat) decided it was time for some derailments from "the paw of god".

A visit to Sandown Toy fair yesterday yeilded no purchases. Although with a massive 500 sellers there were hardly any 00 wagons.
I prefer to research any loco I want to buy rather than impulse buy at a fair only to have no recompense if the item is faulty so steer well clear.
We have decided we want a donkey and trap on the layout (relevent to a charming little book we have read) so trying to hunt for one amonst the plethora of items kept us there almost 2 hours. Still didn't find one though.
Plenty of other toys and items in other gauges including a large O scale oval layout with many loco's and wagons for sale. Wagons at £99.

I'm glad I don't model in O. I'd wear out bank managers quicker than superglue goes off.

Today, we visited another much smaller toy/train fair in Worthing. Some of the usual sellers were also at Sandown yesterday coincidently.
I managed to buy....
4 Mainline grey LMS open wagons. I have been on the lookout for 4 of the same wagons for my Helston Gas Comany tarps.
As these are Mainline wagons converting to better Bachmann couplings was easy. Just unscrew the original couplings and replace with Bachmann 36-026 mini long type couplings. I will try using a fibre pencil to remove the LMS branding and if this does work I will also rub off a number or 2 so the wagons look like they are different. If that doesn't work I will spray over the wagon bodies but this way I will lose the numbering.

I have finished on the Disney job so now have some time off for good behavior.......er....I mean...modelling.

Well trying the fibre pencil to remove the "LMS" on the side of the Mainline wagons didn't work so I removed the bodies and sprayed them grey.
On the hunt for the Donkey and cart, we found the ones we want available from Dart Castings. We saw these recently at an exhibtion and actually asked to buy thier painted one on display. No chance.

The 2 items are L44: FARM TIP CART DUNG PUTT (OO GAUGE) and A22: DONKEY WITH HARNESS (OO GAUGE). Total including pnp was £12.60.
These are white metal so I need to find a way of making them up without the use of low melt solder.
Any suggestions?

Whilst I have been writing this post another RIGHT TRACK dvd has just dropped through the letterbox. Right Track 9 - Practical aspects of DCC.

I am still working on the Russian farmhouse kits and have reached the top (final) layers of painting.
They were undercoated with grey spray paint then I painted them all over in a black wash including the fake thatched roof. After this I dry brushed them with brown. The thatch looks right but now I want to age the wooden sides.
I want them silvery grey but can't quite get my head around mixing this paint.
I'm thinking white with a little grey and a small amount of green mixed in, using a dry brush technique to apply the paint.

Has anyone tried this "aged silvery grey wood" look before and have any tips?
I'm after something like this....

I finished the Pegasus Hobbies Russian farm houses kit a few days ago and have been waiting for a sunny day to take pictures in natural light but the weather hasn't played ball so here are the finished houses albeit under false lighting, making them look lighter than they actually are.
First, the larger of the 2 houses.
Front

The smaller of the 2 houses.
Front

A shot of the ends of both houses

I will use these as either out-houses, workshops or large sheds rather than actual dwellings and as such I have not detailed them internally.
I have glued 2 horizontal matchsticks into the apexes of the larger house just in case I decided to add lighting / a lighting bar and I have some ideas about a workshop.
I could include some sort of lighting or lighting effect and there's enough space to add workshop SOUNDS!

In other news.... I visited a toy/train fair last weekend and managed to pick up a Truro brake van for £15 and a Oxford 76BR002 BURRELL 8NHP "EPHRAIM" Showmans engine with "DAVID VINCENT PAR CORNWALL" livery for £15 (The cheapest I've found). Both perfect for the layouts propsed area.

The kits are possibly the easiest around to build. Literally 4 walls and a preformed roof piece. Not even a sheet for glazing.
I had never heard of Pegasus Hobbies before I bought these on a whim and the only other kits for these type of log dwellings that I've found are usually too european looking but with the thatch I think I can get away with them.
Thanks
End2end
"St Blazey's" - The progress and predicaments.
Welcome‎
Planning
Building
St. Blazey's Works & Depot thread
Top

Almost a month without an update.

I have been building my Ratio yard office kit that came free with January's issue of Railway Modeller magazine.
No pictures to show yet as I still have the roof to add.
I sprayed the roof parts once but (stupidly) I managed to mix up the the lids of 2 of the grey spray paints when I used them last so need to respray with the darker grey of the 2.
The weather in the South today is horrendous so I will need to wait to do the respray as I prefer to do it outside because of the stench.
The rest of the building has been painted, weathered and transparent plastic has been added for the windows.

Moving onto the Inn, I managed to cut down and file the front roof pieces, making sure to file only enough to keep the edge tiles looking a little ramshackle rather than straight. Still much more to do.

As promised here is the yard office, now fully painted.

I've only just noticed after the weathering, I will need to repaint the door handle in gold. An easy 10 second job with a gold marker.
Something learnt on this kit. As you can see the chimney is somewhat concave. This is because I used too much glue at once to fill the chimney void.
As it was made up of 4 seperate sides, I wanted to make sure that they were glued together completely, thinking filling the void full of glue would solve the problem.
This, as can be seen was the wrong way to do it. Most definatly caused by the glue (or amount of it). I used the Revell Contacta Professional mini.
I should have glued all the sides together, let them all dry and then over the course of a few days added some more glue, little by little until each addition of glue had hardened to fill the chimney void.
Luckily it is only a small insignificant building.

One thing I forgot to mention was the triple layer of spray paint on the roof parts before the later dry brushed layers.
This was my mistake (due to incorrect lids on incorrect shades of grey spray cans

) and thus the roof has lost a lot of moulded detailing of the tiles and the later black wash did not sink into the gaps between the tiles properly, highlighting (or is it lowlighting?) the darker lines of the gaps.
Next time I will use only 1 layer of sprayed on grey to keep such detailing.
Thanks
End2end
"St Blazey's" - The progress and predicaments.
Welcome‎
Planning
Building
St. Blazey's Works & Depot thread
Top

I love the imaginative use of Linka. I've always found the roofing moulds to be the trickiest ones to get a good result, as the gaps between the moulds seem more obvious. I have more recently smeared a bit of polyfilla onto the gaps and then scribed it out once it's dry. It's a bit of a fiddle though.
Gerald H - BNR Correspondent :)