Post pictures and information about your own personal model railway layout that is under construction. Keep members up-to-date with what you are doing and discuss problems that you are having.
Post Reply
41 posts

It's looking fantastic mate.. love the snow effect and use of light in your photos.

No model trains were destroyed in the taking of these photos!

Thanks very much Desmond- our house is very dark (tiny windows and low ceilings) so took the chance last night to get some real photos of it that are more flattering than grainy indoor phone shots.

I've also sent this lot of photos to my grandfather in law, who up til now had no idea about it. I hope he likes it!
Top

I can feel the cold...
"It's his madness that keeps him sane."
Top

Fantastic photos - especially the ones with lower lighting levels and the snow looks really good.
Tixeter Junction - My layout thread

I found some suitable figures for Hutchinson in a model shop that was closing down, funnily enough, in Grosmont on our anniversary. They add a bit of life to it I think. 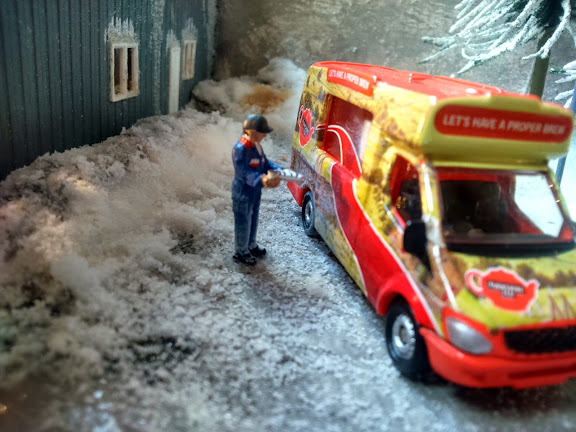 I also bought an LNER tank at an exhibition. The N2 is a little unreliable and so this should provide more enjoyment in use. I was torn between this and the Hornby S&DJR Ninth which was new and very handsome. I am wary of Mainline models after a bad experience with a Pannier but it comes with the option to return it, NYMR have one and it has turned out OK. 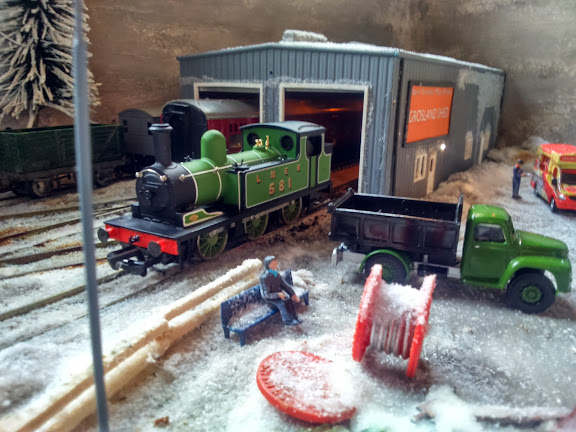 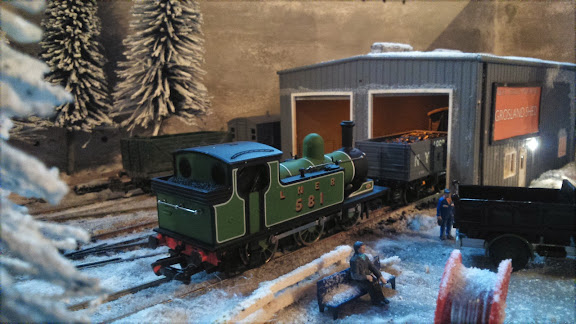 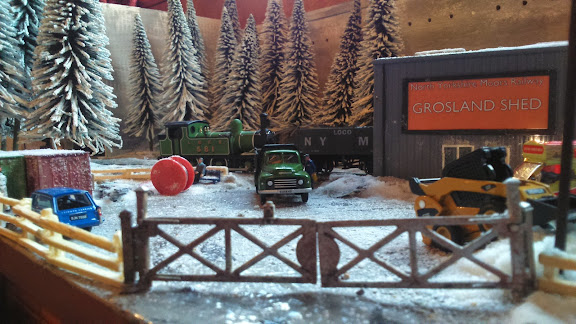 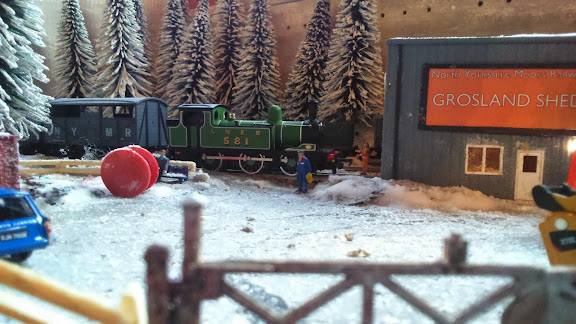 I shudder to think what it cost them to ship all the way to Hutchinson from the UK!!!!!

You joke. We have in the past paid £45 in customs charges for a package posted for $40 by the mother in law which contained only a used bathrobe and a Christmas card...
Top

The time has come to revisit Hutchinson/Grosland Shed.

Hutchinson was the product of an inexperienced modeller. It was built with a base and sides of 9mm chipboard so it weighed a ton. I’d built it with an overly packed trackplan of Hornby track with insulfrog points that the short wheelbase locomotives I was using didn’t like, not helped by the use of a single Hornby power clip for power. The scene was only 2ft x 1ft so operational scope was limited. After a couple of months the old Hornby track rusted and so all running stopped with the exception of Emmettman's radio controlled shunters and use declined.

My wife’s grandfather, who kicked off this layout when he gave me his Great Northern Railroad snowplough, died in December and my own, a passionate engineer, died in November. This gave me a bit of a kick to get it going again. I ordered a load of track, along with Hornby’s model of Lord Phil. We live in Matlock and Lord Phil is the venerable austerity tank that hauls tourists back and forth from Matlock into the White Peak all summer long. I designed a track plan for a tiny inglenook with cassettes for the fiddleyard. 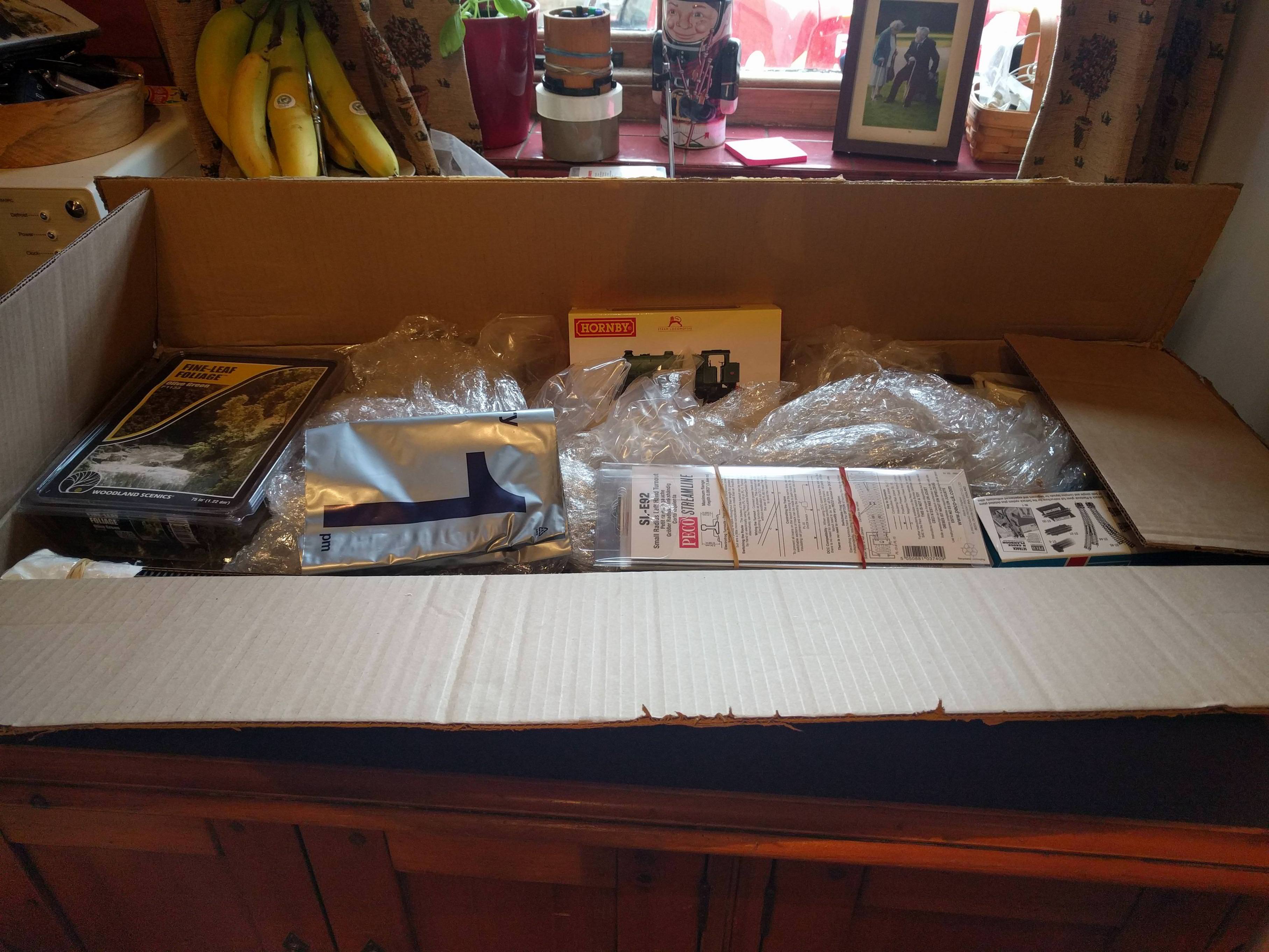 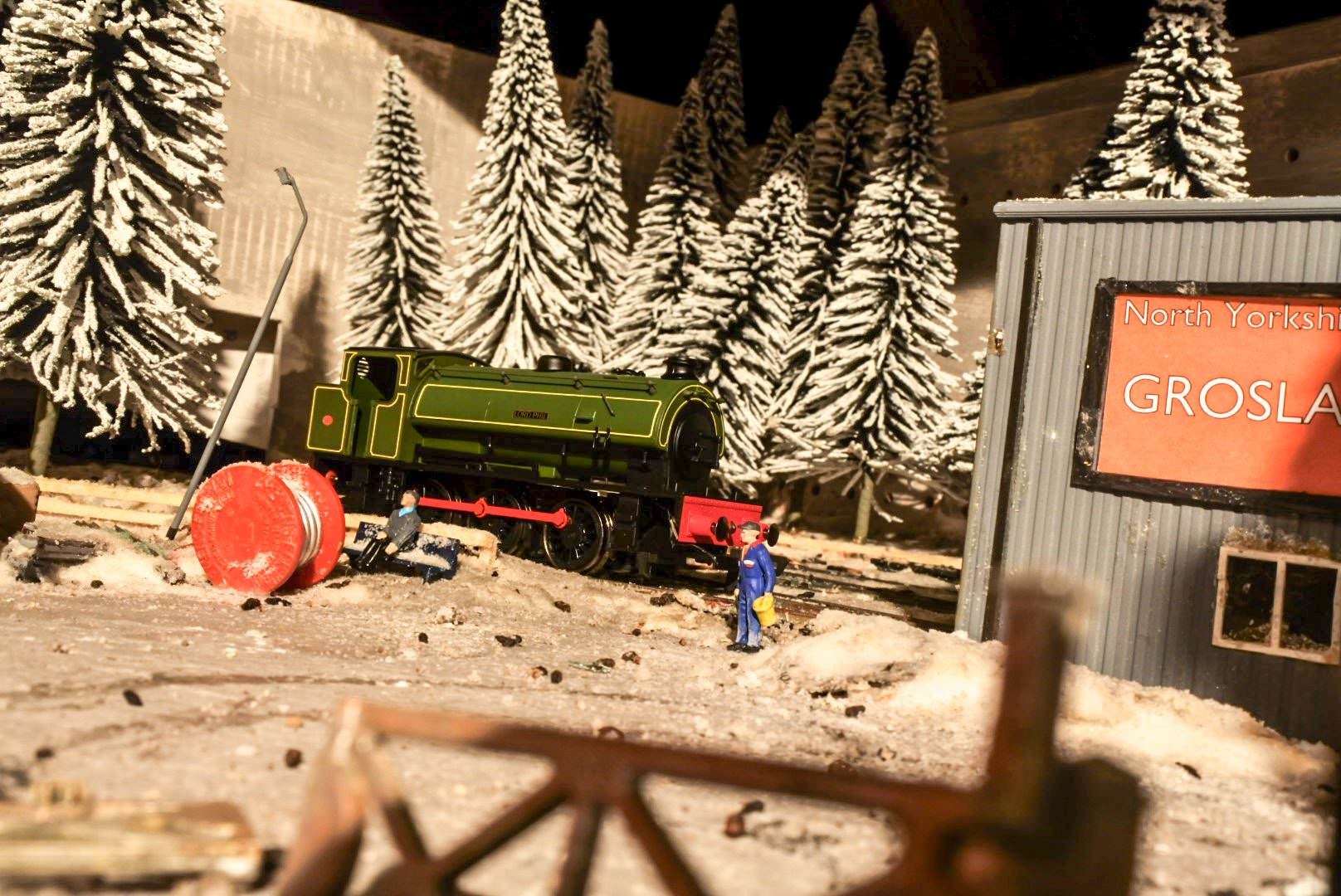 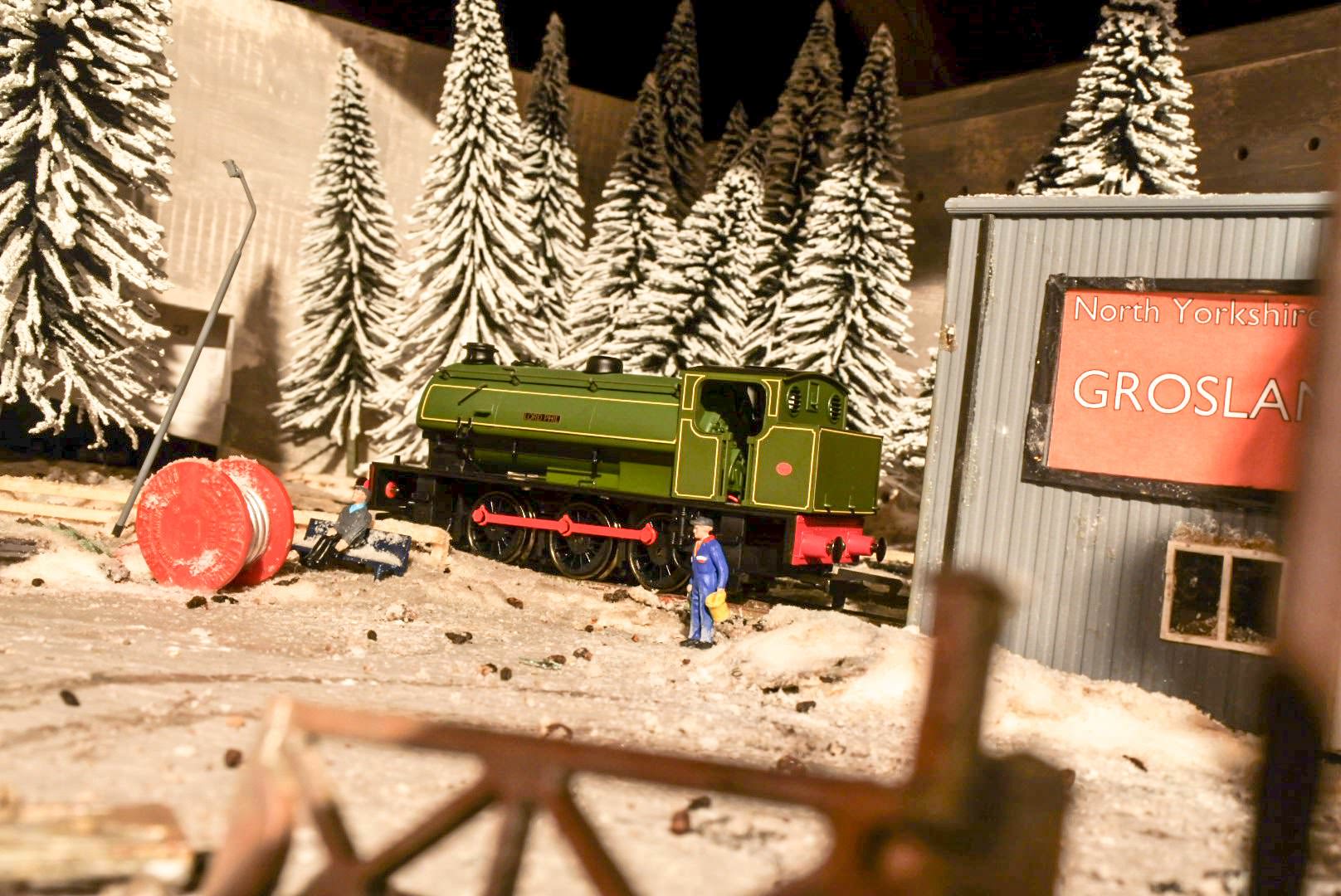 I was up in the loft to get the layout down and make a start when I noticed a baseboard that I’d previously had part of my first serious N gauge layout, Fort Ealasaid on. This had been built by someone who knew what they were doing and was a slightly bigger footprint than the old Grosland Shed but was much lighter, and would be easier to wire. I measured it up and redesigned the track plan, a more useable 3-2-2 inglenook, still with cassettes for the fiddleyard.

Over the weekend I stripped down the baseboard and soldered dropper wires to my track. 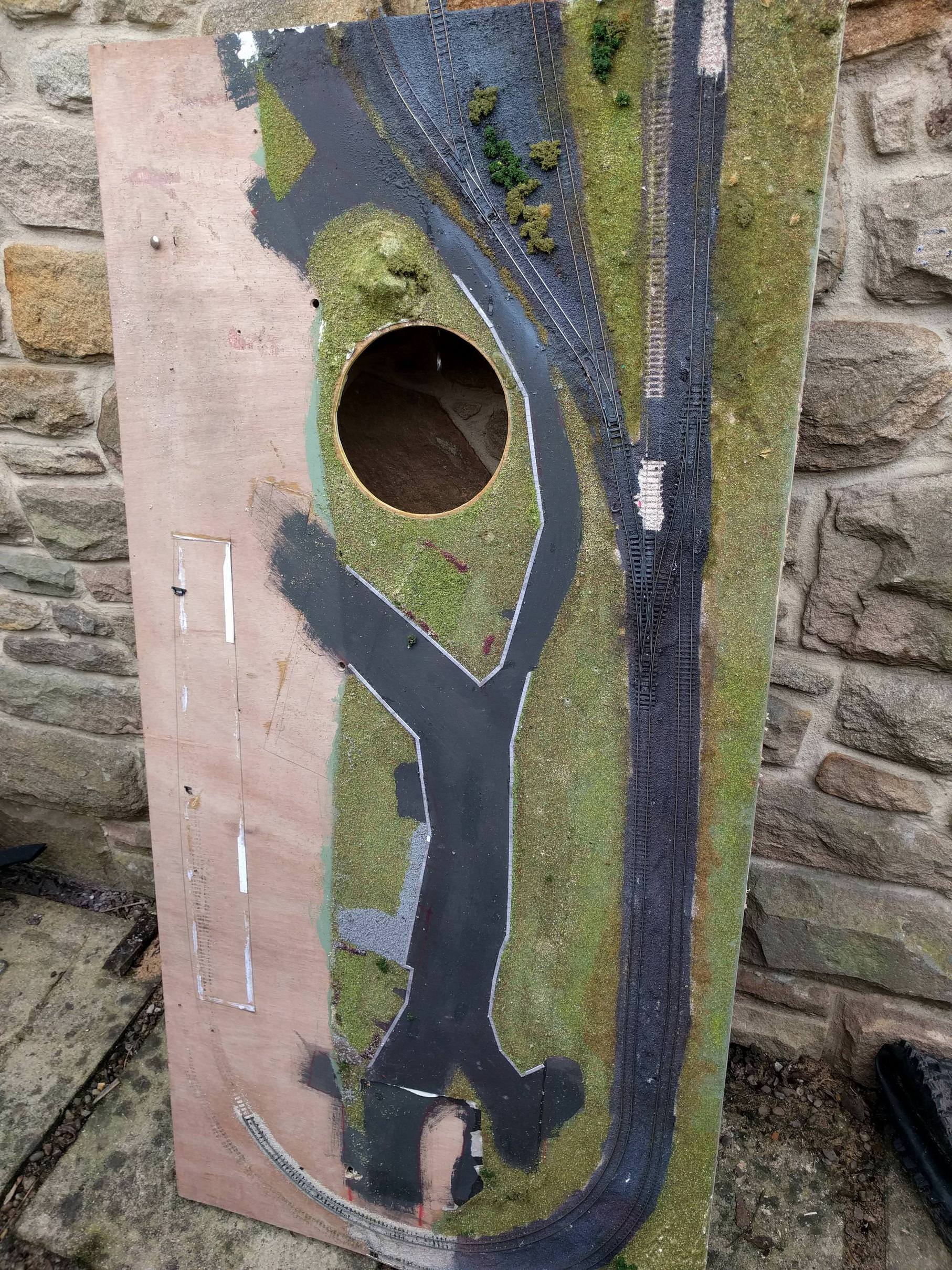 I’m excited to get going with this build. It will look and feel the same as the old Hutchinson, with snow and big pine trees looming gloomily over the yard, but should be much more enjoyable to operate. I’ll keep this thread updated as I go. 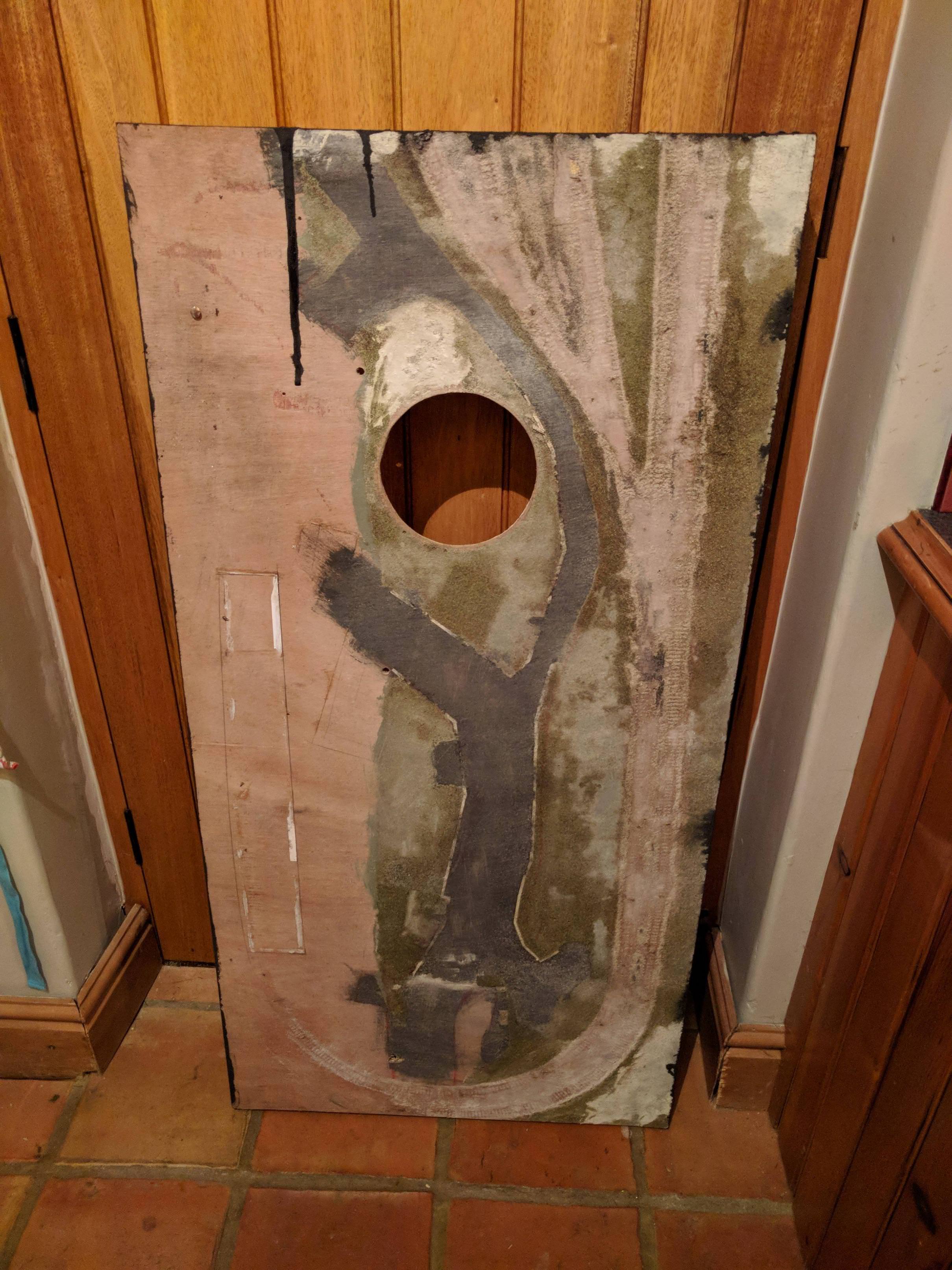 The snow with the lovely Mainline J72 are very effective.
Top

I've been meaning to post these shots for a while. When the two Beasts from the East hit I ended up working from home and work on the layout accelerated. Hills went in back in January, along with the track which is all wired up. The snow was laid down, which takes a while as it needs to be done in layers, and the building from the old Hutchinson installed. I made some backscenes from a large photo of mine taken in a snowy wood, printed using the plotter at work and mounted on plywood. The most recent addition is the pond, made using Bachmann's EZ Water. The base of the pond is a foil baking tray cut and pushed around to fit the extended hole I cut for it.

I'd ordered the first new wagon for the layout - I've decided to get a wagon based in each of the places I've lived. I don't live in Wirksworth but it's as near as I could find. Lord Phil arrives to shunt the wagon into a small train for some brake van rides. 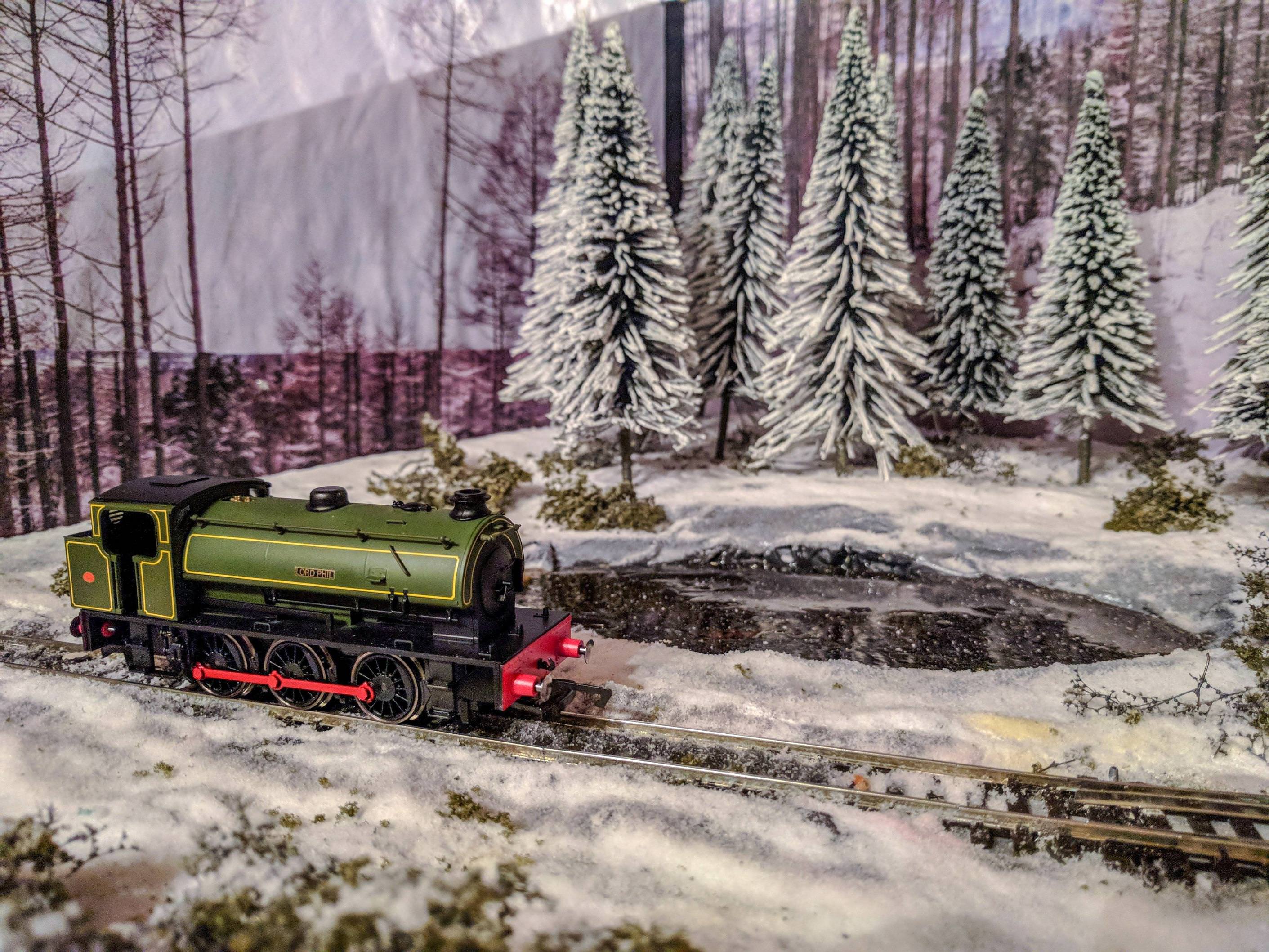 It picks up the wagon from the line outside the shed. 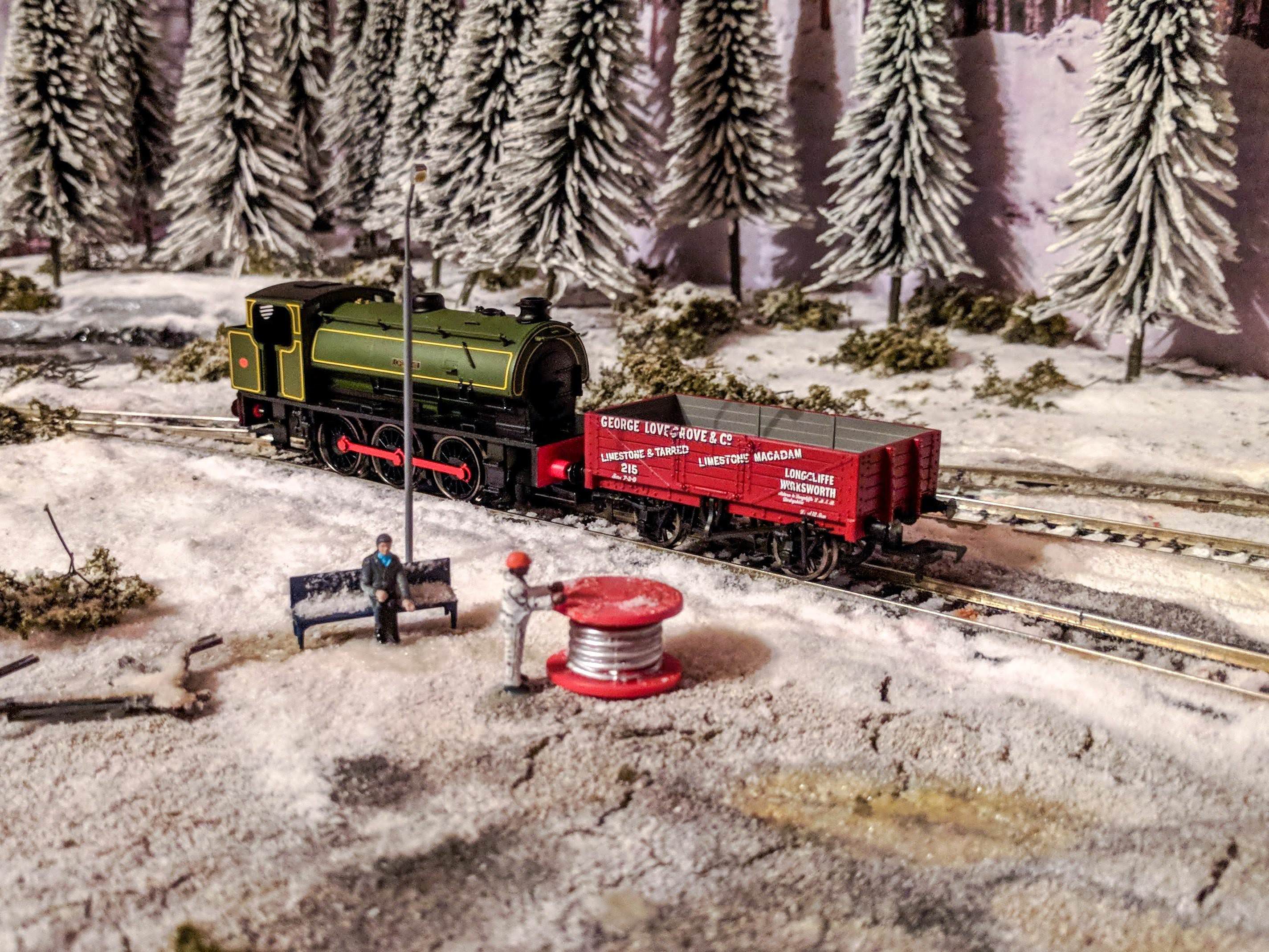 Then heads to the shed, where the brake van has been having a small repair to the roof. 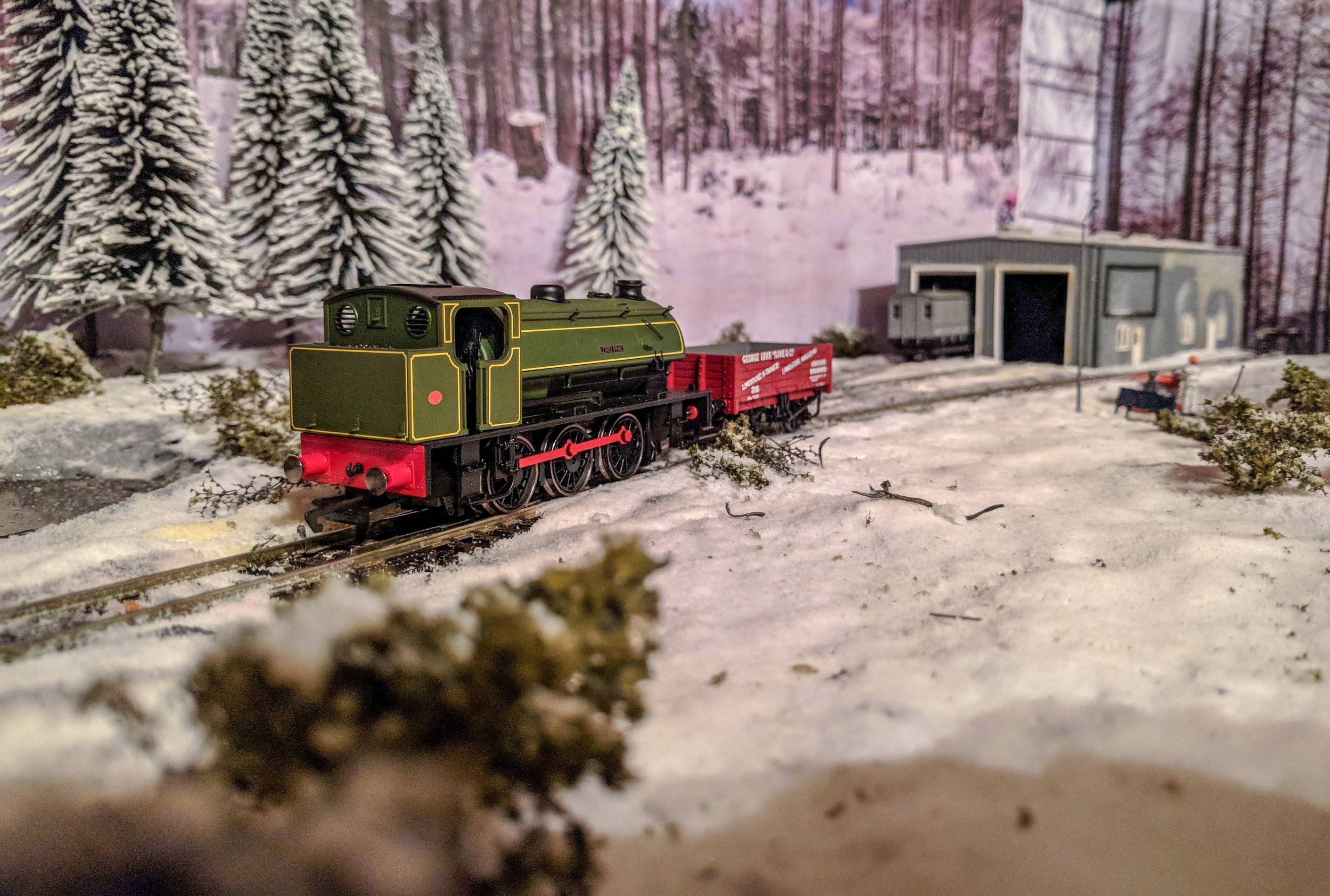 Brake van collected, the train moves into the siding for some final checks. 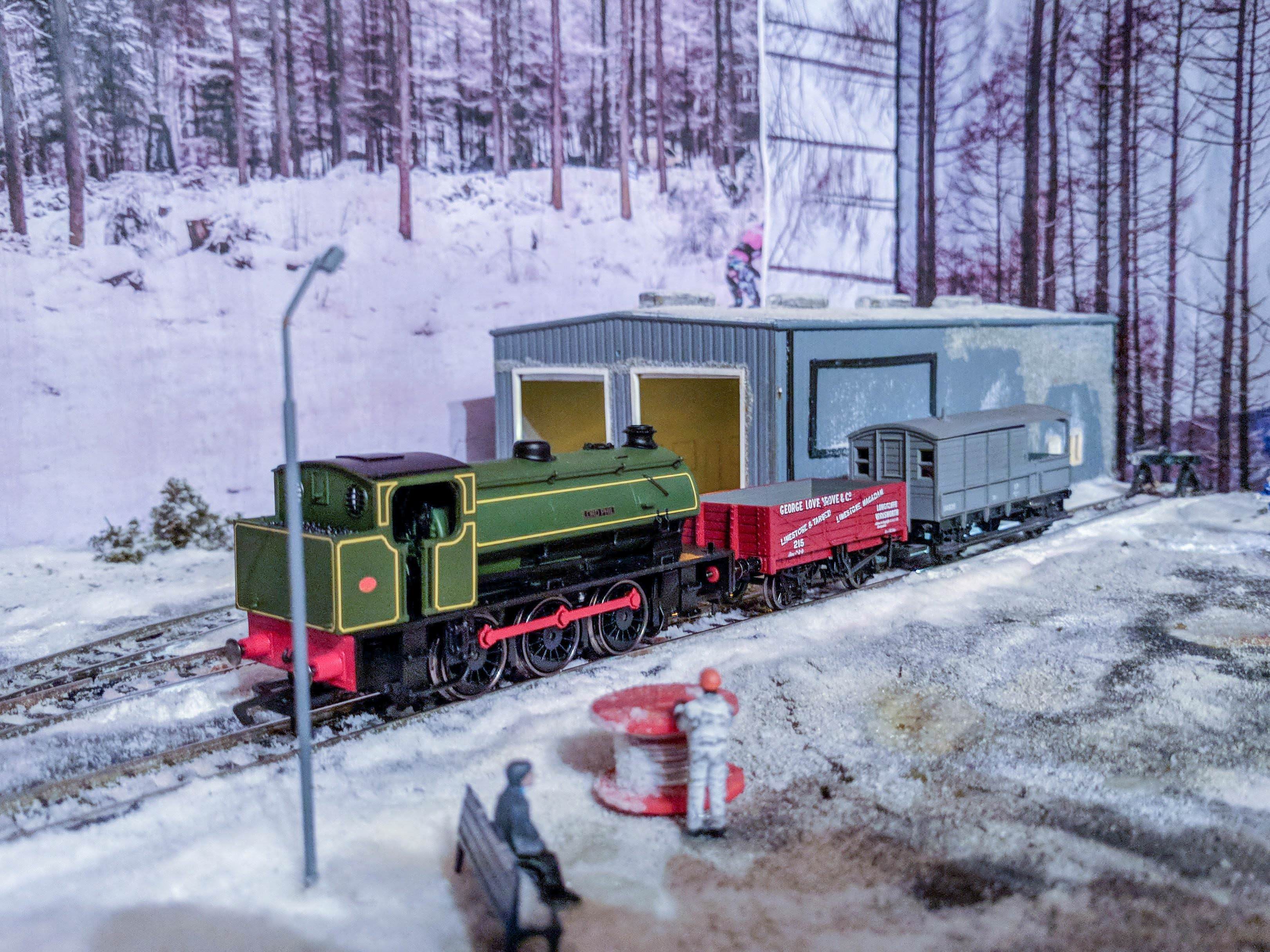 Then the train heads off to Grosmont to pick up passengers. 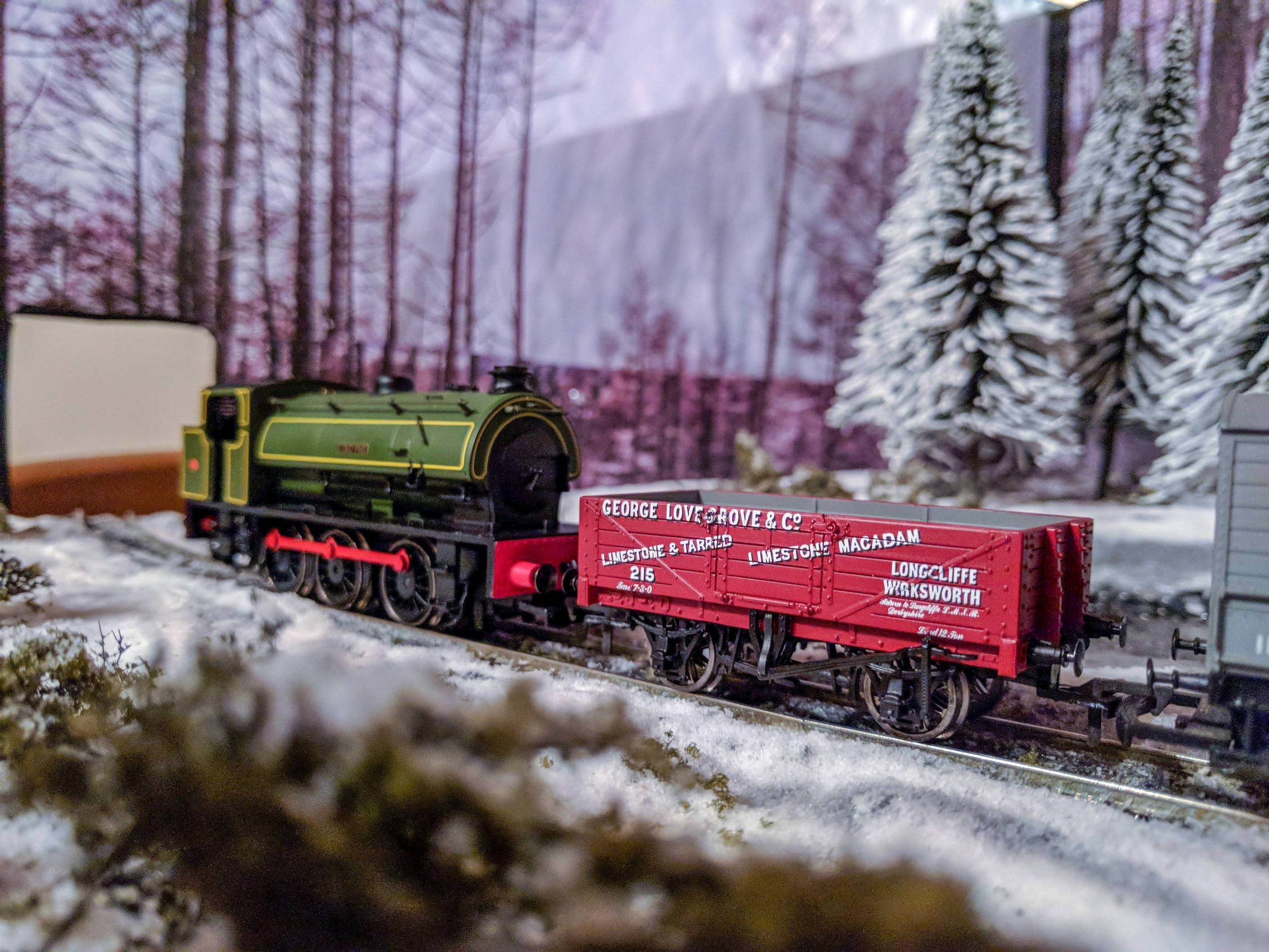 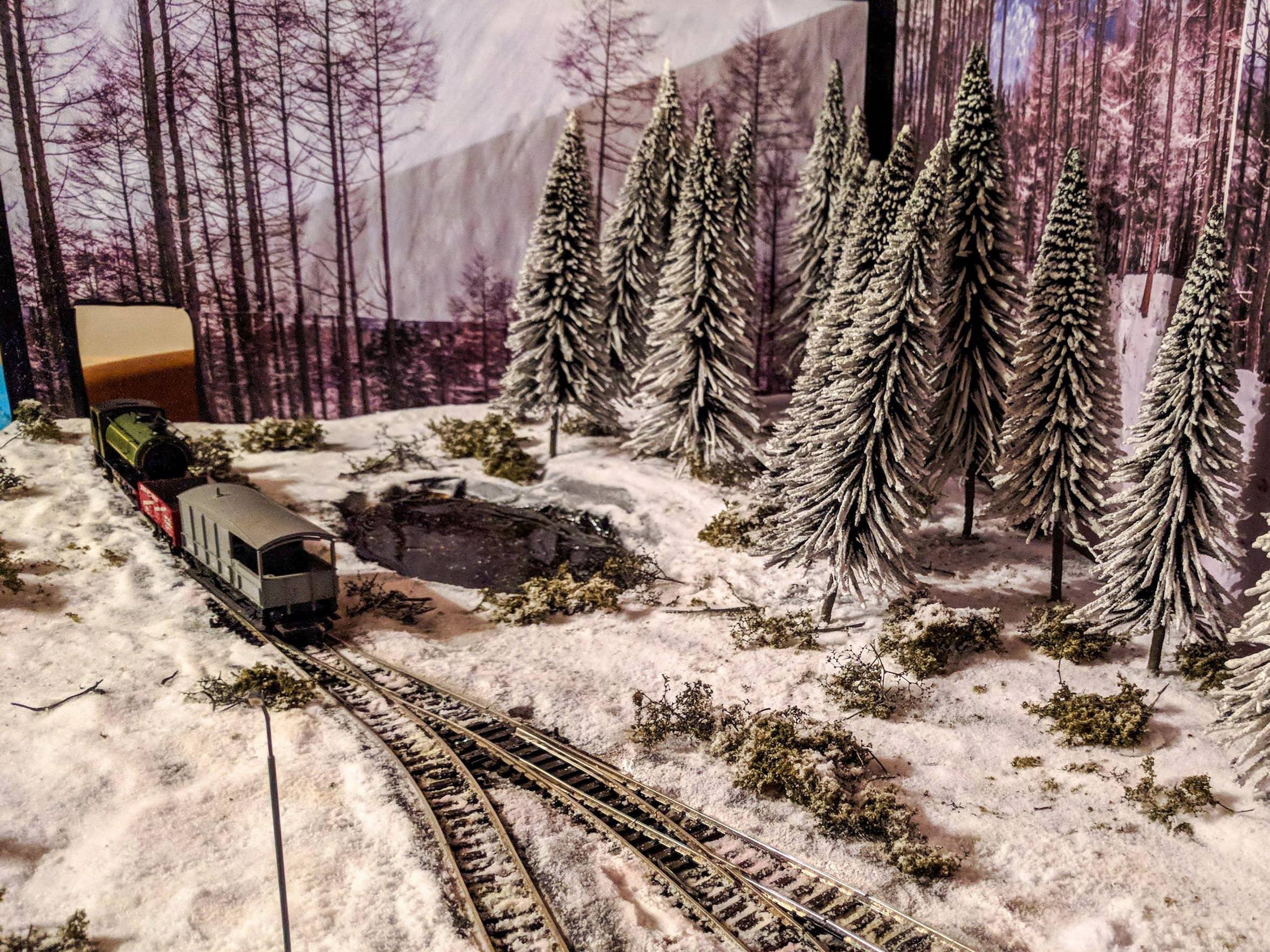 I like the backscene, it's one of the many things I need to sort on my layout this summer.
http://www.c60lg.co.uk
http://www.bramleyline.org.uk
Budgetbrooke
Top
Post Reply
41 posts