Post pictures and information about your own personal model railway layout that is under construction. Keep members up-to-date with what you are doing and discuss problems that you are having.
Post Reply
74 posts

Back in the dim and distant past of 1966, work took me to Somerset and I was fortunate enough to see what was left of Bath Green Park after closure. My secondary school had been adjacent to the Weymouth/Waterloo and Somerset and Dorset junction, which probably accounted for me failing more exams than I passed ! It was good to see the 'other end' as it were, but why I never travelled the S & D to Bath I don't know, but really regret not doing so. My modelling days had been severely curtailed due to moving around Somerset ( no, I'm not a gypsy) marriage, kids and what have you. But after living in a total of 8 houses in 4 towns in Somerset we moved back to Poole where residency took place in a further 3 homes before finally, in 1996, settling where we are today. Modelling still had to wait though, the house needed total refurbishment to turn it into a B & B (which we still do), and with the girls getting married, work etc etc modelling still had to wait. Thus it was not until 2006, when I had the opportunity (and some funds !) to purchase a large amount of model railwayana, that I could now do what I'd wanted to do for the last 40 years - have a big enough shed just for me and a railway! Selling what I didn't need of the railway stuff on ebay brought in the money that I needed to fund my hobby. Because of one thing and another I still wasn't able to start until 2009 ! The following images are of the start to where I am today. So here goes -

As it was to start with (that's after I've had to redesign and lay the garden out!)

First the old lean to shed and the laurel hedge had to go.

A nice new shiny concrete base - glad I didn't have to mix it by hand ! And then there was a shed - oh joy!

Got to keep warm so carpet and insulation 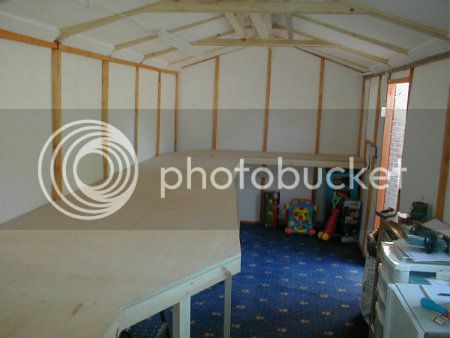 To design my layout (over many many months) I used Xtrkcad which I then printed out to 100% size and fitted to the baseboards. And then the track laying began.

The control area. Home made point and signal lever frame.

And then over many months all the wire-in-tube point control was fitted - and they all work too !

So on to the scenic bit. The roof is a brass scale version of the Bath train shed. Same as Taunton MRC version but only half the length. Apart from the actual station building, all the other buildings, fencing etc are scratch built but not necessarily to true dimensional scale. They were made to fit ! 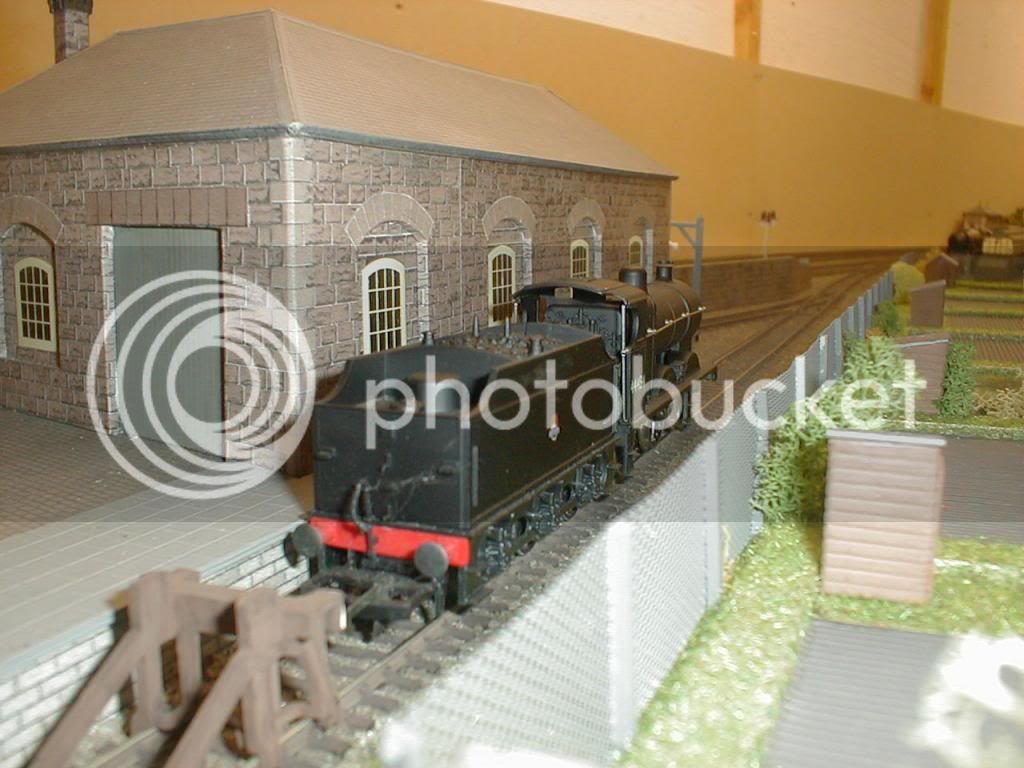 For those of you who know Bath, you've probably noticed the River Avon is missing from the station throat! Well, during the great drought of 1954 the river dried up to become no more than a stream which the council later routed through an underground drain. There, got out of that one nicely I think!

And there you have it. So far. I'm still only able to 'play' for a few hours a fortnight but I'm happy, which is what this hobby is all about. There are lots of ideas but not enough hours spare. Still, one day I shall retire! I shall update with photos as something happens on the layout but don't hold your breath waiting!
Last edited by clivef5915 on Wed Jan 27, 2016 3:02 pm, edited 19 times in total.
viewtopic.php?f=22&t=40184/Bath Queen Square - as never was !
Top

That is amazing to see your progress from nothing to whare you are today, well done in keeping a photographic track of your progress. You seem to have planned the whole operation superbly, what system is that you are using for your points?
Really like this layout, please post some more photographs.

That station looks amazing! really good work so far, just out of interest what was the timescale from the first pic to the last?

Jimmy
My N gauge layout in the workshop
Layout
Top

Hi Jimmy,
The first picture and the site clearance took place in May 2009, the shed was erected in June but it wasn't until May/June 2010 that the baseboards were finally fitted. The last photo was taken about a month ago. Good job I'm a man of patience !

Excellent stuff, but pity it's permanent, not portable, there are too few decent S&DJR based layouts on the exhibition circuit, it maybe half the size of Taunton MRC's example, but it's probably twice as busy

Patience and commitment (and expenditure!) beyond my understanding. Looks to be a TOP layout - with lovely details.
dave j
Works End 0 16.5
viewtopic.php?f=22&t=49336
Top

Hi Luckymucklebackit,
The points system is home made. The levers are 6mm sq brass with 3mm round brass soldered into the top of the square section. The levers pivot on 3mm brass rod. The tubing is 3mm external / 2mm internal diameter PTFE tubing with a 0.8mm piano wire control cable. The wire runs through a 3mm vertically elongated hole in the square brass with small 0.75mm brass electrical connectors screwed on the wire on each side of the lever. This gives the adjustment on the push/pull movement. At the point end it is simply a 40mm length of 3mm brass rod with a 1.5mm horizontal hole in one end, and held onto the underside of the baseboard by two 3.5mm cable clips, one each side of an 8mm hole in the baseboard below the central area of the point tiebar The control wire is bent to right angles and fits into the horizontal hole. A 1mm hole is drilled vertically half way along the rod which takes a 22mm piece of the piano wire soldered vertically and goes up through the baseboard hole and into the point tiebar. This bar just slides back and forth, thus changing the point direction. Simpless!
Somewhere I've got a drawing of it all !
Hope this inspires you. Great name by the way.
Regards
clive f
Last edited by clivef5915 on Thu Jan 28, 2016 10:18 am, edited 1 time in total.
viewtopic.php?f=22&t=40184/Bath Queen Square - as never was !
Top

Thanks for the explanation, obviously something that you have put a lot of thought and planning into, I take my hat off to you sir!!

P.S. my user name is based on the name given to Scottish D11/2 No 62678 "Luckie Mucklebackit", I wanted to use the original name elsewhere but it had already been taken, so I changed it slightly.

What a good looking layout, I think everybody has a soft-spot for the S&D

Jealous is not the word, an excellent job so far. I don't think I saw a mention of size how big is the shed? and will your trains be wondering out into the garden (landscaped like the mendips of somerset of course)

Commander tear this ship apart until you have found them track plans!
Top

Hi TK421,
The shed is 21.5ft by 8.5ft external which gives an internal 'play area' of 21 x 8. As big as I could fit into the space, but do so wish it could have been 10ft wide !
Not into garden railways personally, I like being in the warm when I'm playing so nothing ventures outside the shed. Not even me when it's cold!
Regards
clive f
viewtopic.php?f=22&t=40184/Bath Queen Square - as never was !
Top

Just a few more photos to show whats been happening. A little more detail being added around the shed sidings area but have yet to add the moss, weeds and general engineering 'rubbish' that you saw lying about, and a few more of the station area, also weedless at the moment. Oh, and I've decided to name the station Bath Queen Square, as it was before it became Green Park.

The grey area outside the fence is my version of tarmac. You have to be a smoker to get this effect, it is literally cigarette ash pressed onto dilute PVA and rolled flat!

The next couple of photos just show the laid ballast before its been painted like the two above. The white blobs on the track are blutack to stop the points being gummed up. 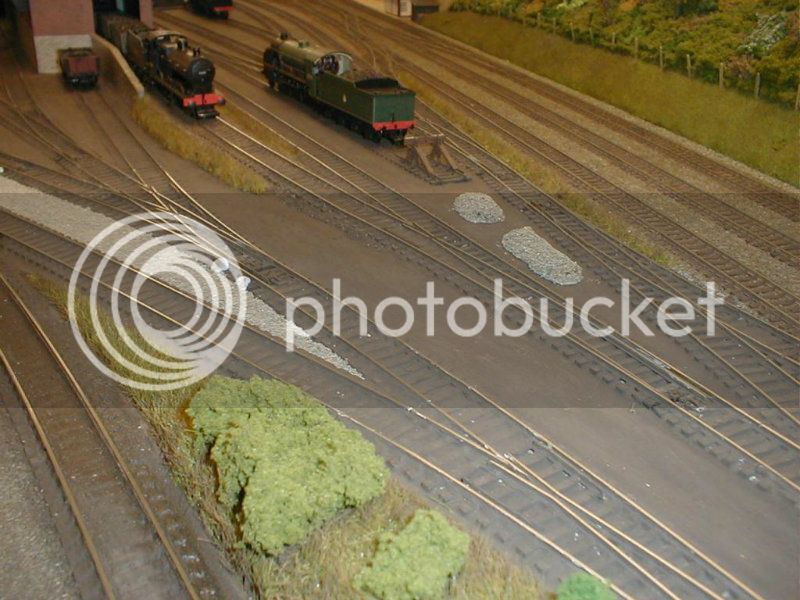 And lastly, some pics of my mechanisation of the Peco turntable. As you have probably guessed from previous photos, I like things that push, pull, turn, slide or twist! So it is a simple pulley system that does the job for me.

Well thats all for now folks as the saying goes. As and when more is done I will post up some more photos.
I wish everyone a Merry Christmas and hope that all that you desire comes true in the New Year.
viewtopic.php?f=22&t=40184/Bath Queen Square - as never was !
Top

That operating system for point control is a work of art. James May would love it!

Regards Steve
On top of everything else my football team is owned by chicken farmers.
Top
Post Reply
74 posts