by clivef5915
Hope everyone had as good a Christmas as they wished for and the New Year has started well. During the Christmas period I found time to go to the shed and have started on a non-scenic track alteration which I hope will improve things a bit. The first photo is as it used to be before I had done nothing other than just make the baseboards, the tracks coming round to a dead end. Easier to see the photo than for me to explain. (It's the board above the kids toys)

The next photos show the changes, so that trains will run along the side of the shed, around the loop and then continue back into the station on a staggered basis. There will be 4 isolated sections on the new bit to hold trains of 4 carriage+loco.

Then a removable section at the door. No real reason but I preferred removable as opposed to hinged.

Just got to lay all the track and wire it all up and away we go, hopefully!


this layout is really taking shape! Looks like you've been busy building before posting your progress on here. Good plan! I agree the point control is a work of art!!

by clivef5915
Well I've managed to finish laying all the track for the return loop and get it wired up, and hey ho, it all actually worked first time !
With the control system I've got the return loop is fun to operate, getting the controller and the DPDT switch correct depending which way round the loop the train goes. But I'll get used to it .......eventually!
Anyway, a few pics. As it isn't going to be a scenic section I wasn't bothered about the wiring being on show, just as long as it works! And with the rail gaps each end of the door lifting section it actually sounds like a real train, click-clack wise.

The loop radius is 19" and every loco I've got goes round it OK. Any bigger and I wouldn't have been able to get to the side of the actual layout station area (top right in photo 3)

The ' High Authority' has decreed that I will be decorating for the forseeable future ( I reckon a couple of weeks - she reckons months !) Whichever, the layout will have to take a back seat for a while.
Will update as and when there's something to add.
thanks for looking

by clivef5915
Well, SWMBO was nearer with her estimation of decorating time, but hey-ho all done now. (well until the next time anyway!)
Just thought I'd show what has been done so far with 2 of the Metcalfe PO 241 Viaduct kit to produce a backdrop of arches. Still a fair bit to do but pleased with result so far. Not too much doctoring needed, eg. reduced the walling that would have formed the inside walls and the addition of MOO 52 stone paper to the back of each arch. And then glued to 2.5mm card. The photos show more than I can explain.

The finished arches will form a backdrop between the embankment (on the right) to very near the platform (on the left) in the below photo, (2 metres) although a lot more has been done since this photo was taken.

This is about 3 to 4 ft from the front of the layout and would have done my back no good at all if i had to keep reaching over to add bushes, ivy and suchlike, so there is a small base section glued on so that I can do all the scenic bits in the comfort (and warmth! ) of the kitchen, and then the finished length can be plonked in place afterwards.

Have yet to decide which would be better for the backscene above the arches, whether to have a bit of countryside and sky or adapt some photos I have of the actual Georgian terrace next to Bath Green Park.

I will show it finished - eventually!

by Ex-Pat
'Can't believe I've missed this layout until now - I won't be missing it from now on!

The subtle curves and pointwork layout are extremely convincing. What Code track is it - looks like Code 75 from a distance?

Considering your mechanical points operating system I was just thinking that your 17th December 2012 post shows a mass of wiring - what would it be like with electrical point control I wonder?!

Keep up the good work.

by Beejay7
Superb Layout but as a lifelong Bath Resident and frequent user (now shopper) at Green Park but a little dissapointed to your relegating the River Avon to the status of a sewer!....

by SouthernBoy
That's a great layout so far - and the lever frame for points and signals is really very impressive. I'll have to keep an eye on this one

by whynot
Really very impressive - the care in the planning stage(s) is obvious - and is equally obviously paying off!

Just great. Thanks for showing the developments.

by clivef5915
Many thanks to all for the kind comments.
Hi Ex-Pat, the rail is Code 100. I've got a few older locos with coarser wheel sets which I want to run eventually so decided to keep to 100 rail. And I dread to think what the wiring would be like if I had point motors! It's bad enough now!

Hi Beejay7, something had to go space wise so chose the river. I would never insult the Avon by calling it a sewer! merely a stream through a pipe !!

by clivef5915
Have added some 'greenery' to the arches which I think is about the right amount. I would like to have 'weathered' the brickwork first but my artistic skills leave a lot to be desired and rather than ruin it by getting it all wrong tis best I leave well alone! The baseboard at the foot of the arches has to be completed but all in all I'm pleased with how its turned out. Got the length wrong though. When I did the calculation I'm sure I measured it and found it would finish about 4" from the platform edge. Nope, it extends about 4" along the platform ! Seems my maths is as good as my painting skills. But, glad it was longer, I think it looks better than if it had finished short of the platform.

I shall have to get on with the backscene now. Think I'll try Georgian terrace buildings along the top of the arches first to see how that looks. The signal box certainly looks too new and bright, I'll have to give it to my 5yr old granddaughter to age and weather it. She's better at painting than I am !! A little more rough grass has been added twixt mainline and shed storage tracks and in the shed area. More still to be done, someday.

Thanks for looking, and I'll update again when something worthwhile has been done.

this looks brilliant! I love the feel of open space your layout has.
Arches are looking good, too; very well done.

All the best,
Michael

by CliveABromptonowner!
Clive it's coming along very well are you going to have work crew dotted about your layout? Keep the photo updates coming! CJG

by clivef5915
Before the alleged 'heatwave' arrives I thought I'd grab a few sessions in the shed and add a bit more to the scenic side of things. You never know, I might one day run something! That'll be a novelty. A self built rusting corrugated tin hut and water tower loosely based on the Green Park model. (nearly everything I build has to be 'loosely' based, oh to have the skills of others!) Anyway just a few photos of recent additions. 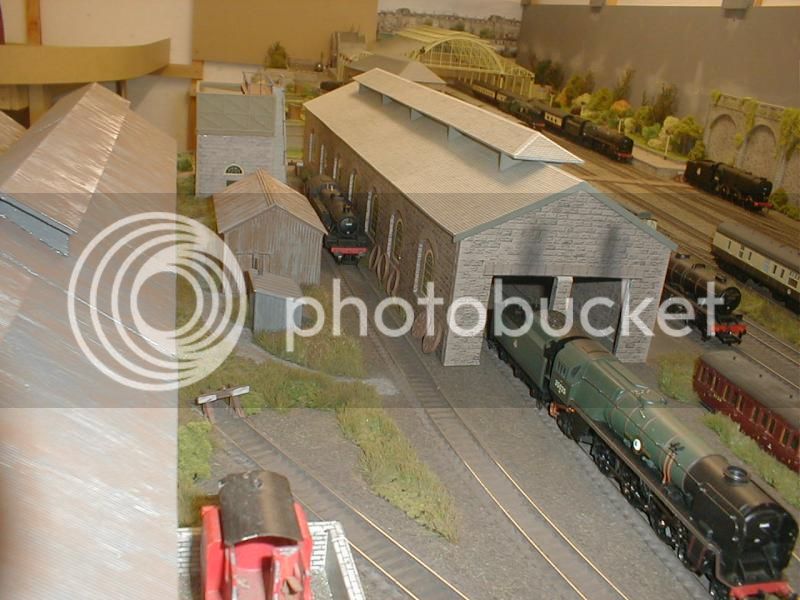 A little bit of weed area around the grounded coach body.

Obviously got a lot more to do, that's if I'm not burnt to a crisp in the shed!

by Dad-1
Some commitment .....
As others have said keep the photos coming. As to wishing You had the skills of others, I
suspect there are many more who wish they had your skill. A treat to follow.