Post pictures and information about your own personal model railway layout that is under construction. Keep members up-to-date with what you are doing and discuss problems that you are having.
Post Reply
87 posts

A guy with your talents, shouldn't have a problem scratchbuilding a ' Barge'.

An update of sorts. I have populated the station areas with some people, namely the Bachmann products which are rather good. But the main reason that I am here , is that for the first time in my life I experienced what can only be described as Train ****. Oh the joy and shuddering that ensued. It almost brought tears to my eyes and a special fast delivery of extra strong toilet tissue from Amazon. The reason being is that I have just installed two zimo sound decoders and double reflex speakers into my prized and worshipped Blue Pullman. This involved soldering speaker wires onto the PCB in each unit, a task that quite frankly scared the heebie jeebies out of me. After a week of procrastination I purchased a soldering iron with a tiny tip (unlike my tip on my honeymoon) to do the job, anticipating everything that could go wrong. After all the BP was not cheap and combined with the sound stuff, its value exceeds 500 pounds. Well I need not have worried because the installation with the help of a tiny tip went faultlessly. Joking aside the sound chips elevate what is already the God Of Model Railways onto an all new level. Words such as stunning and awesome (everything is..) do not do this model justice. It just takes your breath away , it is that good. Digitrains sound files are installed on each chip, and are also synced such that the lead car starts up first and then a few seconds later the other bursts into life. After work tomorrow I will try (or not because Im a lazy sod) to get a video uploaded to the forum.

I have also in the last few months installed zimo sound chips into my Duchess, 08 shunter, and 108 DMU. The shunter is also fitted with a large super capacitor for obvious reasons. This was quite a job to get everything in as it involved removing that cab and putting the capacitor inside. The capacitor is so strong that it will work for up to 30 seconds without power.

I have also completed installing DCCConcepts DCC decoders underneath my baseboard so that all of my analogue cobalts can be accessed via my hand controller. The large control panel that I kept bashing my head on has been dismantled along with 8 miles of wiring. Controlling the layout is now possible via a wireless handset (all digitrax using a receiver) and my laptop running JMRI with a digitrax PR4 USB interface module. As a freebie the JMRI software is quite intense and involves a considerable learning curve. My tablets and phones can access the web server within JMRI and my layout can be accessed with these items. JMRI also includes software that enables the user to create a virtual control panel so that the points can be changed merely by tapping on the relevant point icon, again on a tablet or phone.

Other software I have "acquired" is the full version of Train Controller Gold. This appears to be slicker than JMRI but is after all a commercial product, although tech support is rather lacking.

Finally I have improved the lighting underneath the main station canopy. I originally used copper tape to connect all of the LEDs but has proved not to be as robust as I had hoped. I removed all of the tape and glued some rails to the underside and soldered the LEDs directly to these rails. The footbridge has also been replaced as the original had suffered some damage but also because my skills have improved such that a new one would be better constructed. Also to improve visiblity whilst laying on my back fixing things underneath the layout, some very cheap christmas tree lights were wrapped around the wiring . I can now switch off the loft light and not run the risk of tripping over some misplaced cocaine bricks, falling down the loft hatch and having to explain to a law enforcement office (my wife) why I am covered in a white powdery substance.

On the downside one of my Cobalts internal switches has stopped working and another has a piece of soldered wire stuck inside one of the power connectors. I might just replace them with a couple of cobalts off my Whitemans Wharf layout.

Again apologies for the lack of visual stimulance but I am now going to engage Smug Mode, sit in my comfy chair and watch Robin Hood (yes the new shitty one) and contemplate how much I love this hobby.
High towards the far post,Howard with a header,Hes done it!Steve Howard has scored for Leicester City,Bedlam here at the Walkers Stadium. the Leeds United players are flat out on the turf in utter despair. Leicester City are going to win again
Top

I finally got round to making a video of the Blue Pullman...

https://www.youtube.com/watch?v=JpdE69-78VQ&t=117s
High towards the far post,Howard with a header,Hes done it!Steve Howard has scored for Leicester City,Bedlam here at the Walkers Stadium. the Leeds United players are flat out on the turf in utter despair. Leicester City are going to win again
Top

I have heard, that Bachmann is to release another version of the Blue Pullman in reversed blue/grey, 800/900BP later this year, along with the long promised V2, we'll see.

The Blue Pullman is a pretty awesome model in its own right, but with sound, it's something else...
"Train ****" indeed!
Thanks for the video, sishades.
Don

Just watched the video.
I liked it a lot.
Do you need ear defenders?
2 trains, 2 railroad tracks, one going the other one coming back. Click Clack, Click Clack.
Regards
Andy

Whats this? An update? Yup I am still alive. What with Covid, losing my job at MLP, getting a temp job, spending 3.5 months on furlogh (this was great by the way), doing up the house, sulking over missing out on the champions league, some awful personal stuff,losing my agency job, regaining a job at said agency company and this week being confirmed as a full time employee, I finally had an idea of doing a layout update and then realised that all of my layout posts are sitting under a tree somewhere getting drunk and not wanting to know. So here it is in a sort of resurrection kind of way. I decided to change the diesel depot
so I installed some new smaller lights and removed the single very tall light that I habitually damaged when cleaning track. The crappy old paper portakabins have been swapped with the Knightwing equivalent. Gaze upon my depot loveliness. 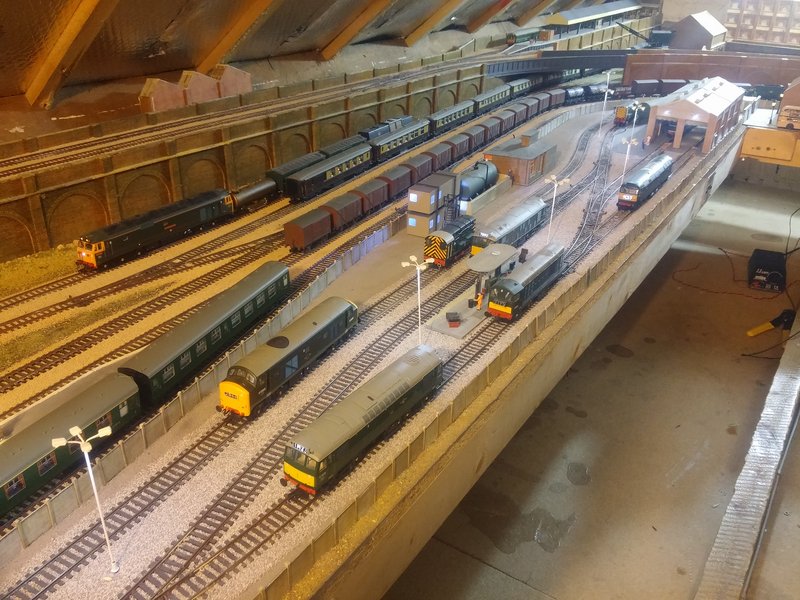 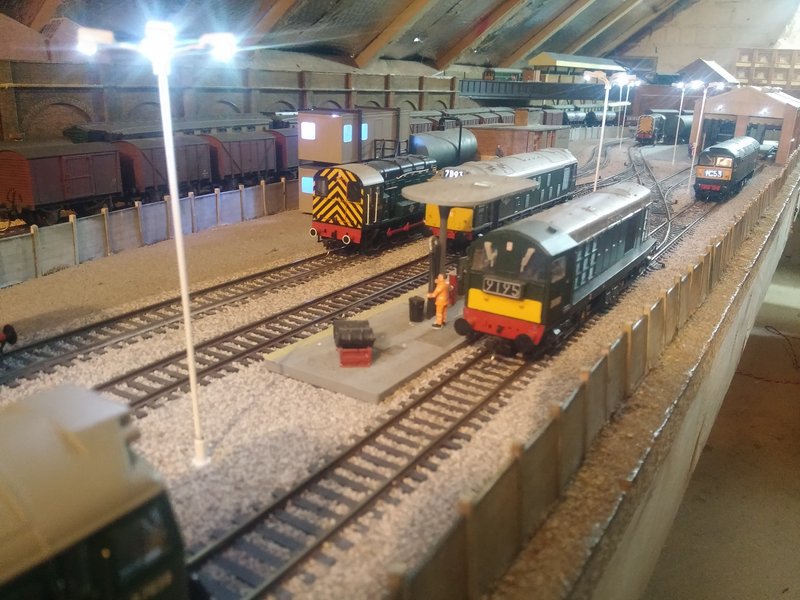 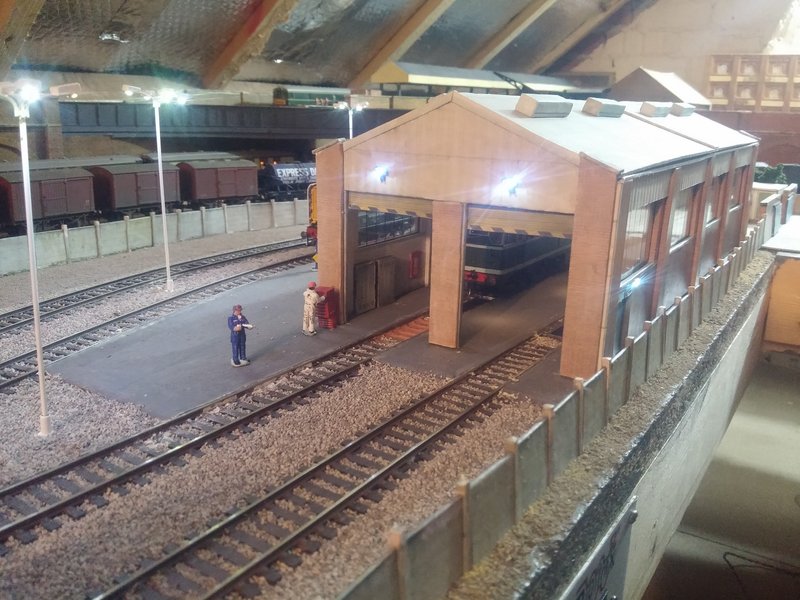 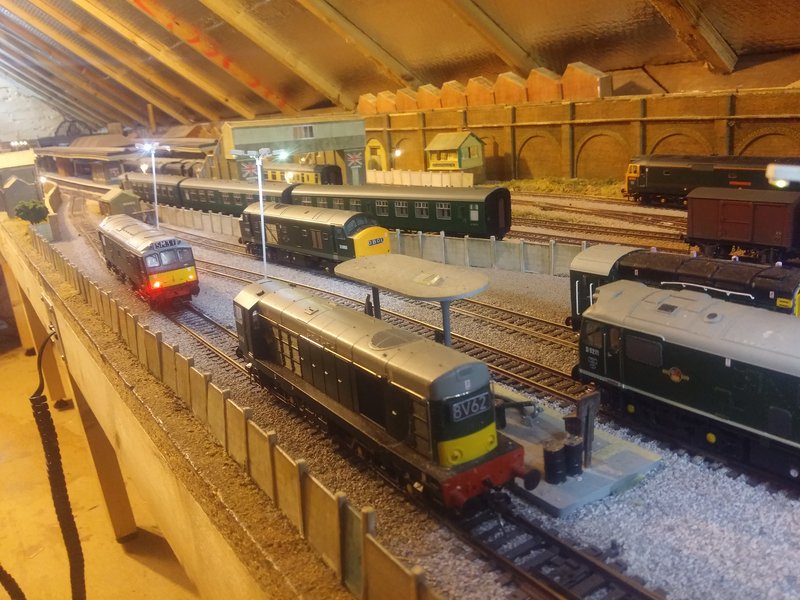 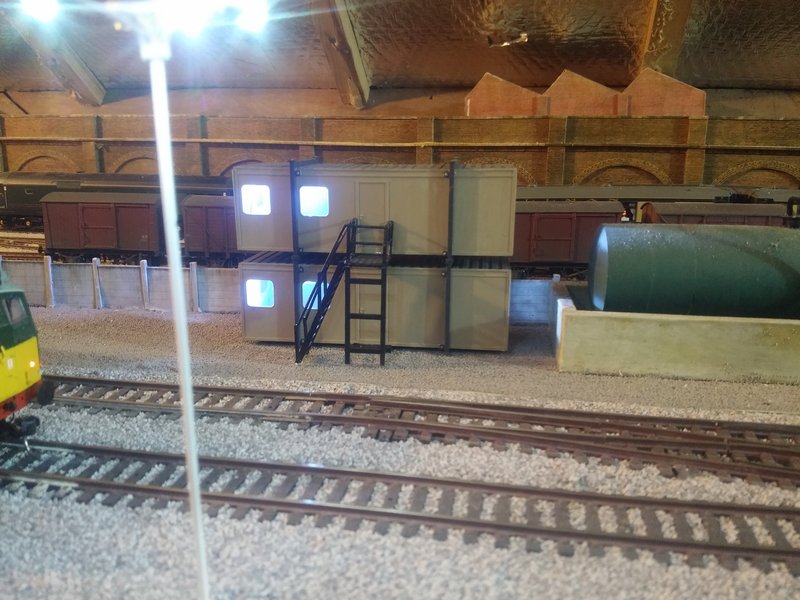 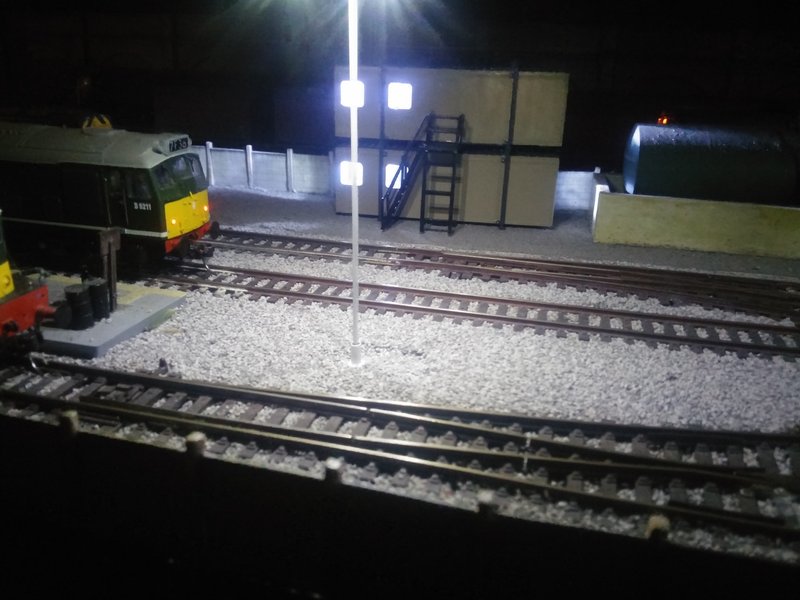 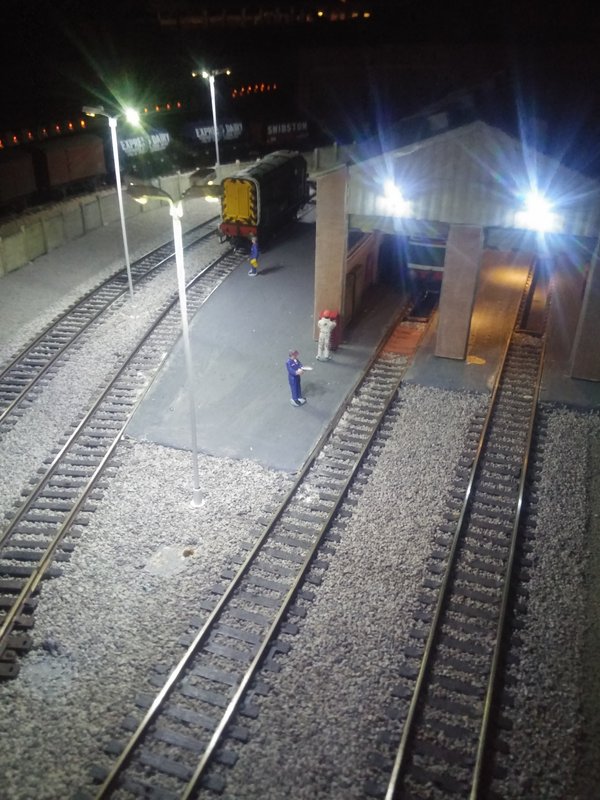 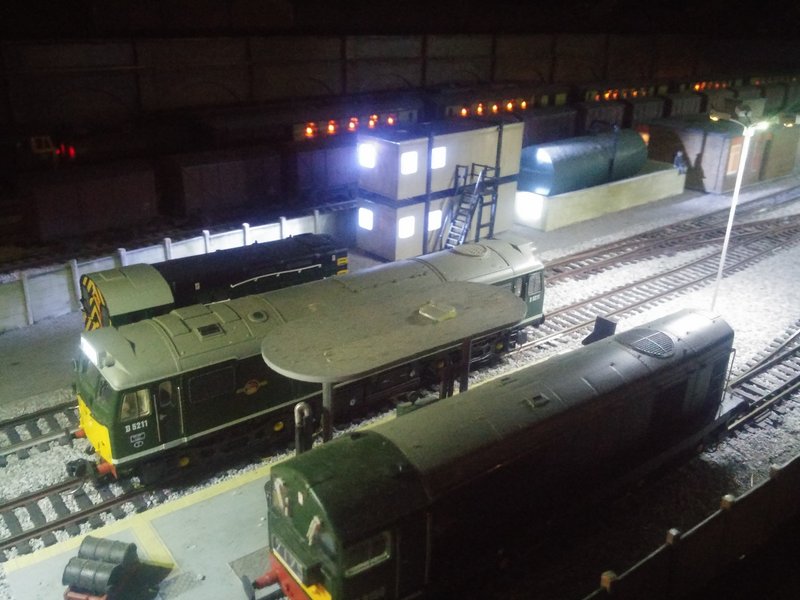 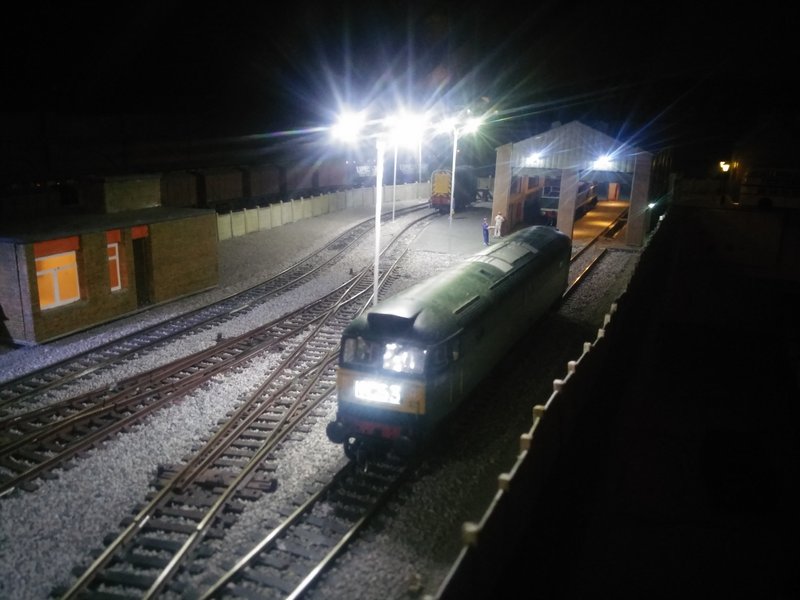 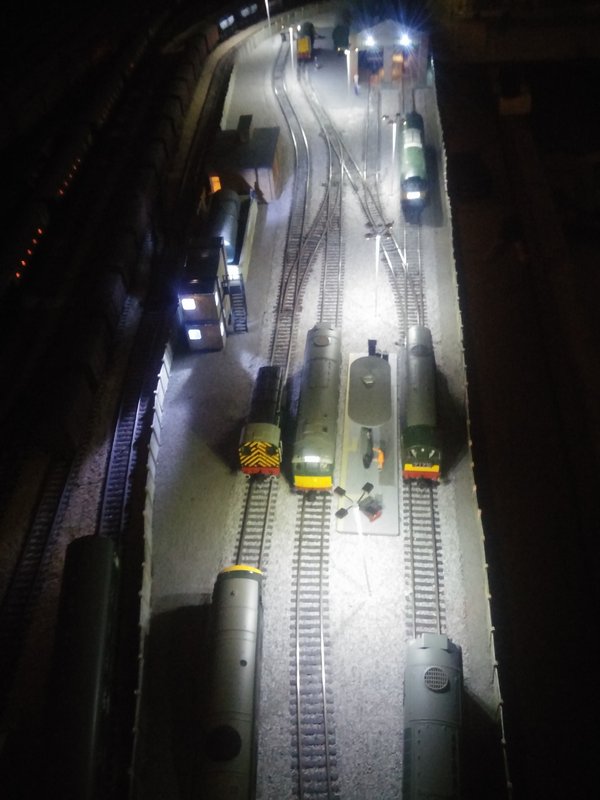 Some barrels and stuff at the south side factories 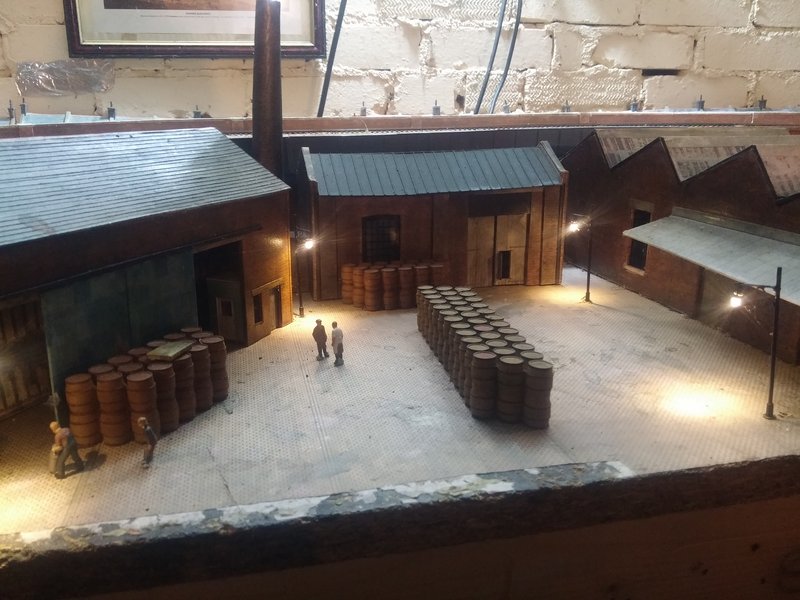 A crane in the freight yard. The original got chewed by my dog.... 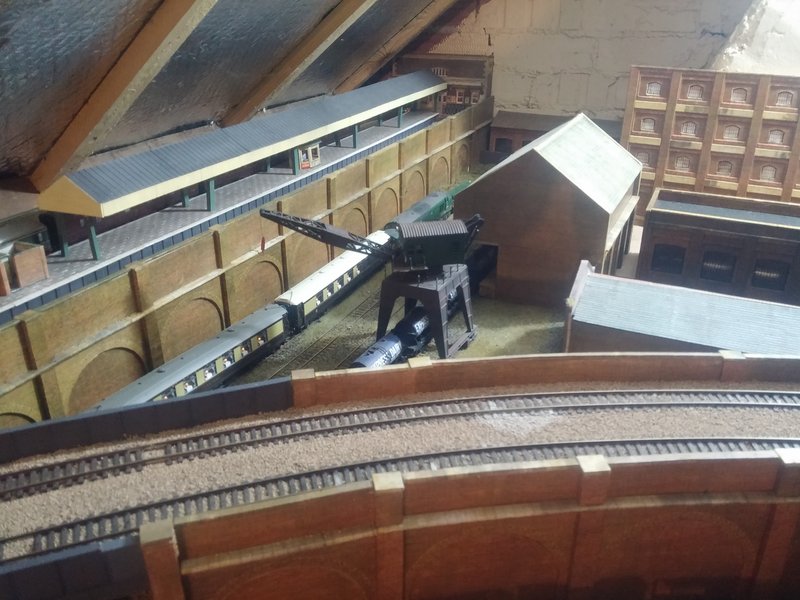 Some people have also appeared 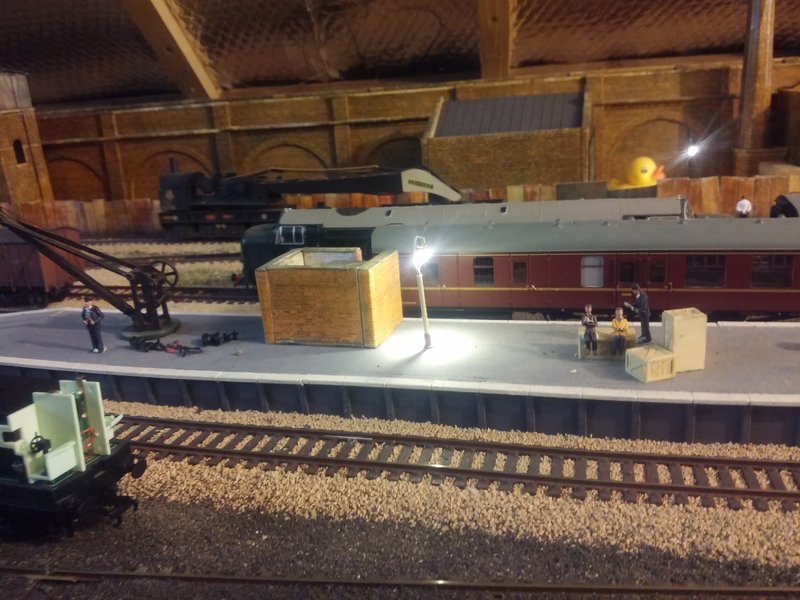 A couple of new locos including the J36 and 6 new suburban coaches. This loco is outstanding with ultra slow movement capabilty and a J50 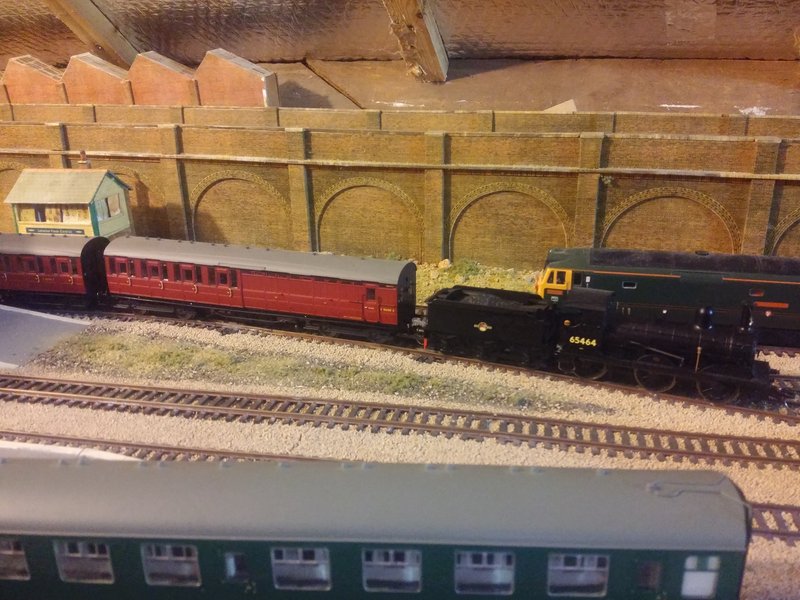 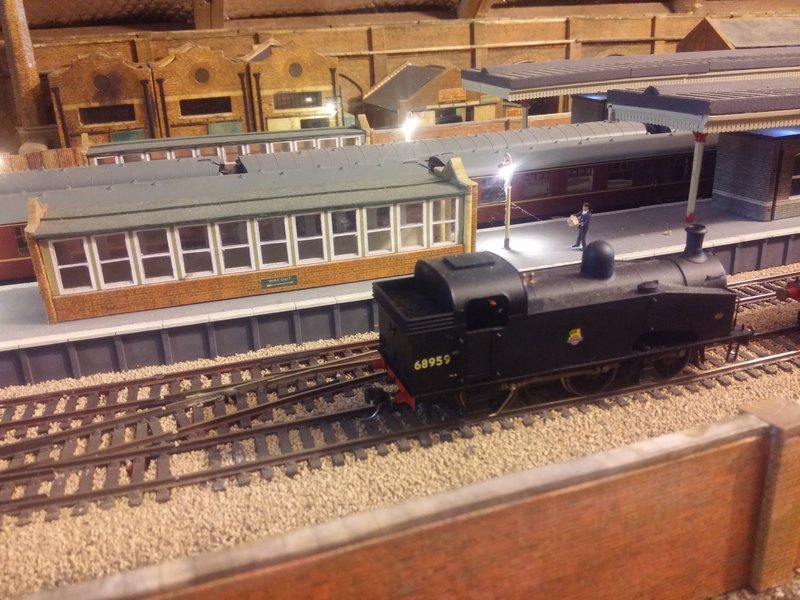 An old friend is still hanging around 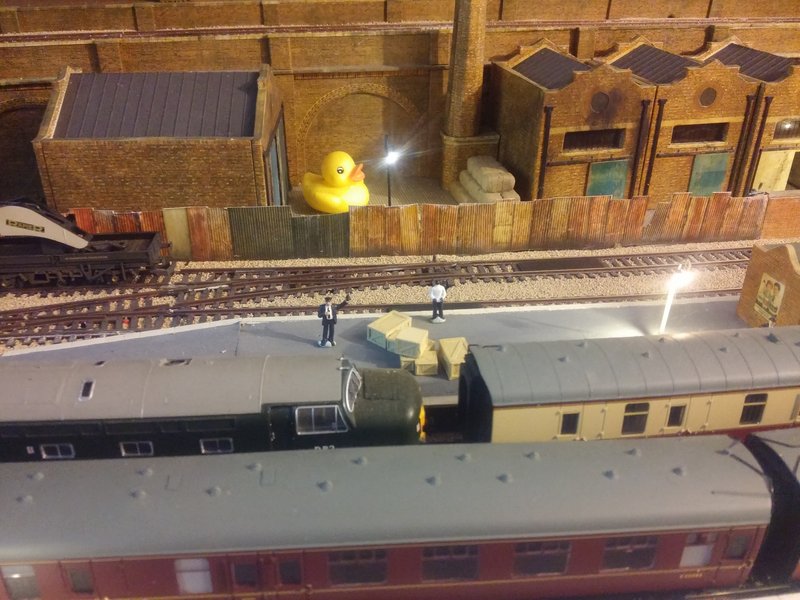 I have acquired some other stuff but the 4CEP sound chip decided it did not want to know so that will be returned, added some sound chips, purchased a sound class 31, and sold some old stuff, including a rake of Harry "Bloody" Potter coaches which I mistook for BR stuff.
And finally a railway worker boasting that size matters 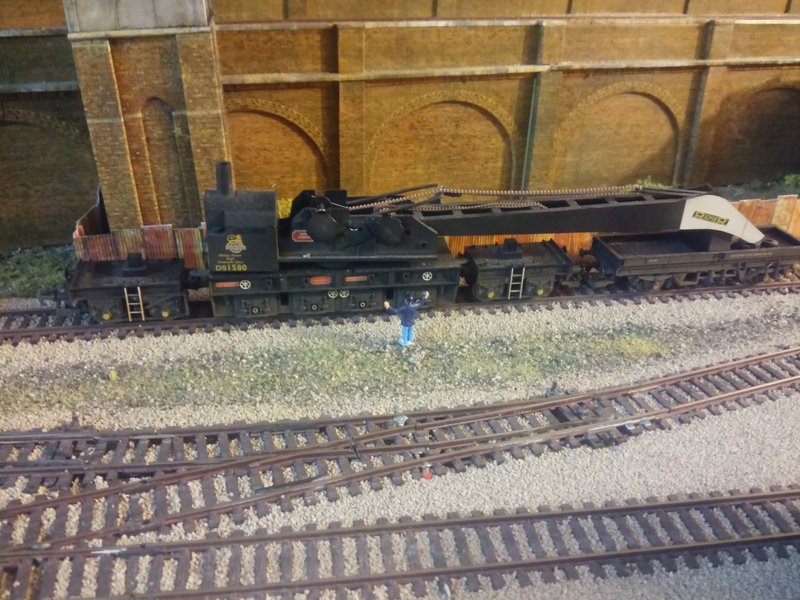 High towards the far post,Howard with a header,Hes done it!Steve Howard has scored for Leicester City,Bedlam here at the Walkers Stadium. the Leeds United players are flat out on the turf in utter despair. Leicester City are going to win again
Top

Looking really good, heard your team did rather well today as well :

Been a busy time, but looking good.

Nice to see this splendid layout again.
The depot looks very good.
2 trains, 2 railroad tracks, one going the other one coming back. Click Clack, Click Clack.

Loving the work on the depot. The potrkabin kits look really good.

Also, where did the tall yard lights come from? They are very effective

They are from layouts4u and are PL4 - Plaza Lights. They cost about £6 each, and are rather sturdy. The wires are pleasingly thick so wiring them up is a doddle.
High towards the far post,Howard with a header,Hes done it!Steve Howard has scored for Leicester City,Bedlam here at the Walkers Stadium. the Leeds United players are flat out on the turf in utter despair. Leicester City are going to win again
Top
Post Reply
87 posts